Everybody Must Get Stoned…
Pleasant Valley section of Barkhamsted (Google Maps Location)
September 23, 2007

Calm down, people. I’m talking about visiting the Stone Museum in the Pleasant Valley section of Barkhamsted! I remember when I was pulling together my ridiculously long list of CT museums sort of stumbling over the one called “The Stone Museum.” Was it a museum filled with various stones and rocks? Makes sense, doesn’t it? We decided to find out via a stunning drive across north-central CT after visiting the coolest tree in the state in Granby. 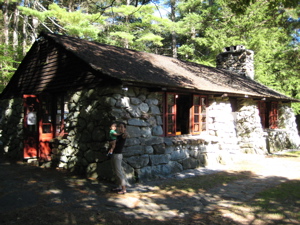 My pre-supposition about a room filled with rocks was wrong – and perhaps why they changed the name after our visit. The Stone Museum is a natural history museum and was built in 1934 by the Civilian Conservation Corps (CCC) as a museum for Camp White and for the people of the state. From what I’ve gathered in my previous hikes across the river in the American Legion State Forest, the CCC seems to revel in stonework – buildings, bridges, waterbars, walls, hillside stairways…

The outside of the building and the fireplace are local field stone taken from old stone walls. All inside woodwork is American chestnut which was salvaged from the trees killed by the chestnut blight. Ironwork was produced by the Camp White blacksmith. The building architect was Robert Linehard, carpenter was Robert Loughlin, and the mason was August Casciani. 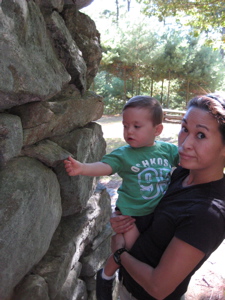 They did a very good job, as I think the place has a rustic beauty all its own. The museum exhibits mounted taxidermy specimens of many mammals and birds that are common in the forests here, as well as samples of twigs, bark and wood of local trees.

Display cases in the museum contain artifacts from Indian and colonial sites in the area, and describe the early iron industry when northwestern Connecticut was among the world’s leading producers of iron. The forges and blast furnaces were fueled by charcoal which was produced in local forests from 1734 to 1923. 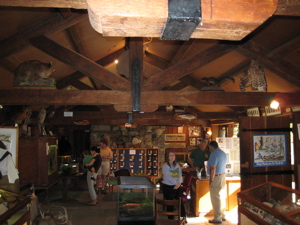 We picnicked down near the river in Matthies Grove. As I’ve learned, every trail, rock, quarry, and grove bears the name of an important person from CT’s past. On August 2, 1929 the Matthies family of Seymour, Connecticut purchased the 210-acre Ullmann farm, including the house, barns, and outbuildings. In a special dedication ceremony, Governor John H. Trumbull received the deed for the Ullmann farm from the Matthies family – the largest single donation to People’s State Forest. The ceremony took place in the beautiful pine grove along the Farmington River, which today carries the Matthies name.

The Stone Museum is a short jog away – and worth the visit. We entered and Damian immediately started pointing to the animals on display. Notably, the kitty-cat: 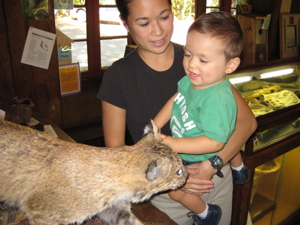 He also enjoyed the skunky-skunk: 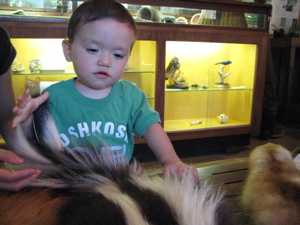 Also on display were several pelts from beavers (the softness surprised Hoang), deer, and various other woodland creatures. As mentioned, the museum also has some good learning exhibits about such things as the tree species one would find in local forests: 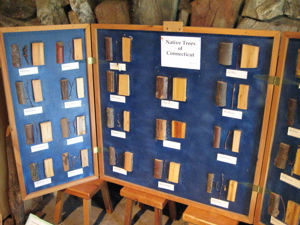 Good to know. The logging industry has certainly had an impact in the local area – and continues “smart logging” today. (Often this is the felling of old hemlocks infected with wooly aldegid blight.) What follows is a study in how long a little kid enjoys sitting on a cross-section of a tree: 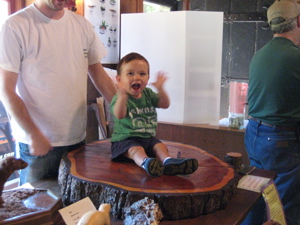 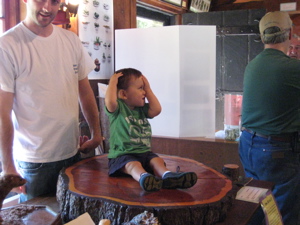 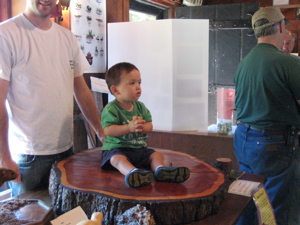 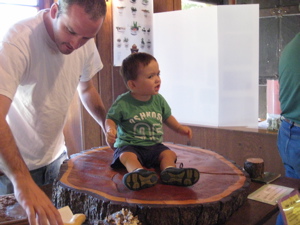 Phew, we dodged that bullet. Say, let’s check out some of the local history of the area, via the museum’s three dioramas showing events in the history of Peoples Forest.

In the 1930s, 250 men occupied Camp White, a Civilian Conservation Corp camp. Some of the projects of the camp were building the museum, trails, and roads in the forest, and planting many of our forest trees. The layout of Camp White is illustrated in this diorama: 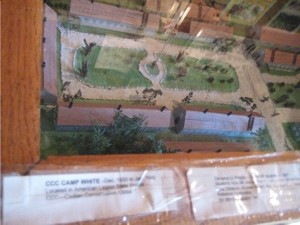 The Barkhamsted Lighthouse, a community of Indians, blacks and whites who lived in the area from 1778 to 1860, is depicted in another diorama. This site has been excavated by Central Connecticut University and the results of the study were published in a book, “Village of Outcasts” by Kenneth Fedor, available at the museum. Of course I visited the Barkhamsted Lighthouse, so no need for that book. Anyway, here’s the museum’s take on what the settlement looked like back in the day: 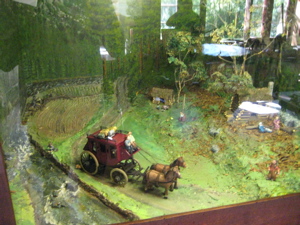 Update: I did read the book and reviewed it a decade later.

Indian activities at the soapstone quarry in the forest are depicted in a third diorama – soapstone bowls were an important part of the Indian culture for about 2,000 years, starting around 4,000 years ago. 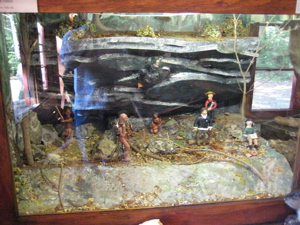 Of course, I would certainly have to visit this soapstone quarry to check it out for myself. So a couple weeks later, during an extensive hike covering the network of Peoples Forest trails, I did just that, via the Walt Landgraf Trail: 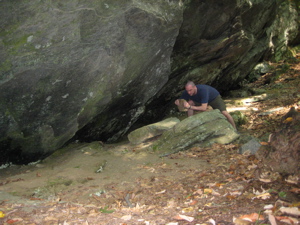 I wasn’t quite satisfied with just the dioramas, so I was happy to see that on exhibit are also a wide range of Indian artifacts, including soapstone and Indian pottery bowls, arrowheads and other weapons and tools and decorative art from the local forest area. As interesting as all this stuff was, let’s be honest… When you’re with a toddler, you’re there for the animals – even if they’re dead. 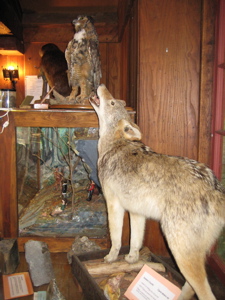 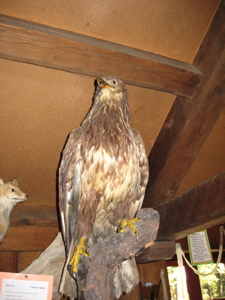 Like the above coyote and juvenile bald eagle, two residents of the area. Once again (like the “kitty-cat above), Damian enjoyed petting the “doggie.” Is that bad parenting? What about teaching him that black bears are cute and cuddly fun-loving friends who like to lend a paw to a father who’s tired of holding his plump little kid? 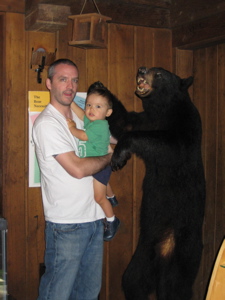 I let Damian roam alone for a while as I took in the remaining exhibits myself. The area out there in Barkhamsted (I haven’t even mentioned the massive reservoir in any of my Barkhamsted reports – and that’s really pretty too) is definitely cool and worth checking out. The woods are as pristine as you’ll find in southern New England and the local flavor is unique and very available.

I’ll end this page with a one-question quiz… What the heck is this? Not only what kind of animal, but what is the actual thing? 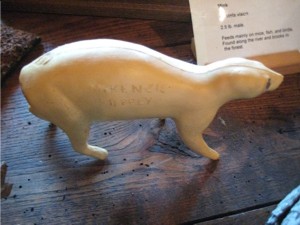