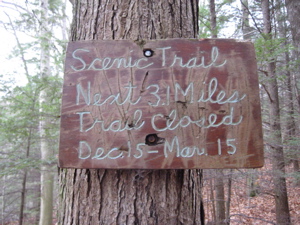 Having finished the early morning hike down along the Saugatuck Trail, I still had some time to check out another of the Connecticut 400. So I picked my way through the back roads north up to Newtown and its Lillinonah Trail. I am always interested (for some reason) in the houses that are nearby these trails I’m hiking, because for the most part they are all pretty darn nice houses. And when you are out in this part of the state, nice houses are pretty much all you’ll see. Many of our state’s blue trails pass near some great real estate, and this is probably some of the most expensive.

There are two distinct starting points along the trail, and several “bail-out” cutoffs along the way. I chose to start at the Pond Brook parking lot off of Hanover Road – a HUGE lot by blue trail standards. This is also the boat launch lot, which I’m sure is a bit busier in the summer. Overcast and chilly – but dry – I began my hike in earnest. I paused noting a couple signs at the beginning, however… 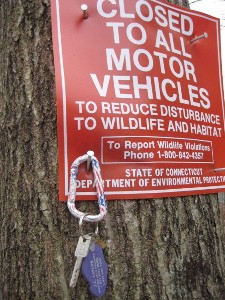 1) A handsome brass sign at Pond Brook noting the terminus of a mysterious 10-mile trail created by a Patricia Barkman with a note about Newtown’s milling past.
2) The sign here at left with the car keys attached. That basically means someone lost their keys out on the trail and that really stinks.
3) The sign above noting that half of the Lillinonah is closed from December 15th through March 15th. Phew, I beat that by under a week.

The trail is closed then so as to not disturb the nesting bald eagles that are so abundant here along the Housatonic River (you can view them from the Shepaug dam discussed below). I, of course, hoped to see some early birds on my trek – it’s weird to use that phrase literally for once. And as an FYI, Ms. Barkman is a local townsperson famous for protecting open space and developing things like hiking trails and fighting things like sprawl and mountain bikers. So I dedicate THIS report to you, Ms. Barkman. 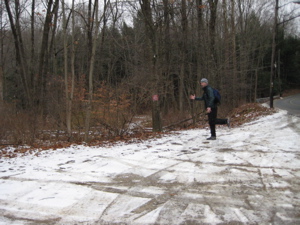 Although I do need to ask her why the confusion with the multiple trail pieces and her naming the Lillinonah “Al’s Trail” instead. There are three histories to this trail and the area it traverses – the Upper Paugussett State Forest. First, the boring one:

From its headwaters in the Housatonic River in New Milford, Lake Lillinonah extends 12 miles to the Shepaug Dam, covering 1900 acres to a maximum depth of 110 feet with 45 miles of shoreline, much of it steep hillside that rises 200 feet or more above the water line. Connecticut Light and Power created Lake Lillinonah in 1955 as a source of hydroelectricity and flood control. The dam’s 57,000-horsepower turbine drives a 43,000-kilowatt generator in what is Connecticut’s newest and largest hydroelectric plant. 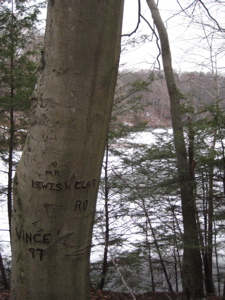 So Lake Lillinonah isn’t a lake at all, but rather a wide section of river. (Lake Zoar south of here shares the same distinction in the same river.) The initial couple miles of the trail are fairly easy, with just a few ups and downs through rocky reentrants along Pond Brook. Once the trail reaches the Housatonic, it levels off along the shelf above the “lake” and offers up some very pleasant views. Now is a good time for local “history” lesson number two.

Mountain bikers need trails to ply their trade. In doing so, they destroy hiking trails via erosion and also being a general nuisance. Personally, I have nothing against mountain bikers and often marvel at their skill. But the CT blue-blazed trail system is an expressly HIKING trail system and I can’t STAND seeing mountain bikers or their tracks on these tralis. So when this (otherwise intelligent) guy writes on his blog that the Lillinonah Trail isn’t made for biking, all I can say is, “Um, yeah. Duh.” [Note: He calls it Al’s Trail, but he’s talking about the first mile or so of the Lillinonah.] 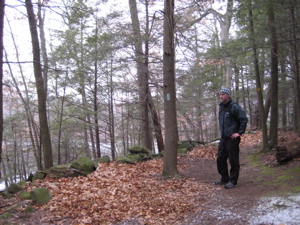 The section of Al’s Trail that starts at Pond Brook and meets up with White Trail is a very, very technical riding trail, with many rock gardens, and steep ups and downs – you can thank Al for that one, he had no sense that if you build a trail straight up the fall line of a slope you are going to increase erosion exponentially… Another thing you should know about Al’s Trail is that it’s technically a Blue Blazed Trail. Blue blazed trails or more commonly known as Blue Trails are basically no bikes, however, my understanding now is that if they are posted no bikes, then they are no bikes. Not sure where that stands these days.

I for one am not a fan of Al’s Trail, either section. In 2006, I was riding the Qball on Al’s Trail through one of the many rock gardens that the trail runs through, only this one was on a downslope, and the ground was wet, my bike slipped out from under me and I belly flopped onto a rock, cracking a rib. Since then, except for a small section near the boat ramp I don’t bother riding Al’s Trail. I am sure Pat Barkman would be pleased to hear that. 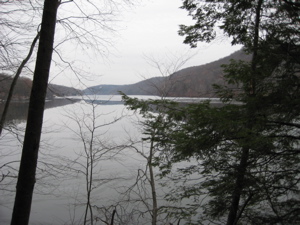 Probably. Because you’re not supposed to ride on this trail! I’ll link his blog though to show you all how this should be done.

[December 2012 Update]: Through hard work, persistence and a respect for the rules, he’s created a properly planned mountain bike trail in the Paugussett, away from the Lillinonah, which is cool by me. The hoops he jumped through are a bit ridiculous to say the least. It looks like a fun track to ride – and I notice that his trail is now getting ridden by ATV’s which isn’t cool. Sigh.

About a third of the way done, the trail tops out at 480 feet and passes by an old crazy looking oak. I think it’s referred to as “The Kissing Oak” because it looks like (or is?) two oak trees fused together. There is a register to sign in and some free brochures about the state’s blue-blazed trail system, which is always nice. Other trails intersect here (which can be taken back to the beginning) which also shed light on another local pastime that I don’t do: 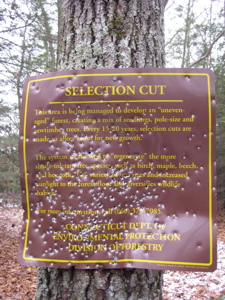 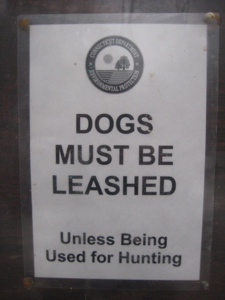 I always find it weird that hunting is allowed in places with such high density populations, but what do I know? And what does that second non-shotgun-shot sign (seen later on the trail) even mean? We’re supposed to believe that all hunting dogs are so well-trained? 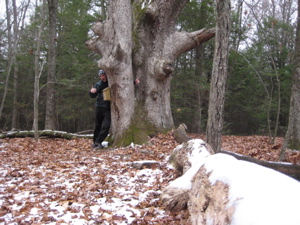 I left the Kissing Oak and followed the trail across the mile or so land spit over to another shore of the “lake,” the calmer part closer to the dam. Once nearer the shoreline again, the next couple miles involved some steeper ups and downs and a bit more of dangerous cliffside stepping. You can’t really tell from my poor picture below, but that’s my foot, mere inches from slipping to my death.

Oh sure, I’ve been in far, far more dangerous spots while hiking, but this was a little different because just under the wet leaves was a layer of ice that made any angled surface a bit slick. I did slide down some not-too-steep inclines a couple times, so I was definitely wary. 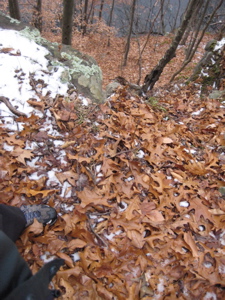 Because it’s not like people haven’t died here before. And when I say “before,” I mean all the way back to the beginning of European settlement. I’m sure you’ve asked yourself, “What does ‘Lillinonah’ mean? It sounds like an Indian name or something.” Right you are, hypothetical reader!

The story is very long (and definitely sordid!) so I will be as brief as possible. (I encourage you to read the whole thing here.) In short, a beautiful (aren’t they always with these things?) Indian maiden – daughter of Chief Waramaug – was being wooed by every Indian dude in the Northeast. One day, when she was 18, she was out for a stroll in these parts and happened upon a fevered and dying Englishman. She nursed him back to health and – say it ain’t so! – fell in love with him; a white guy. 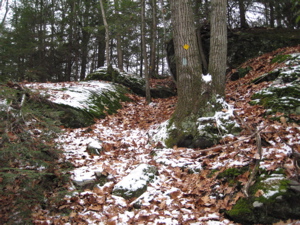 Nobody was happy about this development which really bummed her out and she wasted away to nothing, but the Englishman stuck with her. He returned to the colonies to alert them of his plans to marry the Indian, knowing they’d be upset as well. He promised her he’d return in the Spring and when he didn’t, Lillinonah cried and cried. Then her father arranged a marriage for her and she ran down to the river, hopped into a canoe, and paddled to her suicide over the falls.

Then! She saw her white guy up on the cliffs and desperately tried to save herself. He jumped in and swam to her, grabbing her just before… just before they tumbled over the falls in each other’s arms to their deaths. I sort of removed all the romanticism, but you can read the story for yourself for that.

The views of the dam are the best here, at the last points along the river/lake. 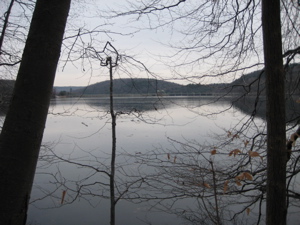 Once the trail leaves the river/lake and heads west back towards the parking lot, it passes a sugaring operation. Those blue tubes are the hoses that the sap flows through, ultimately becoming maple syrup. It’s here, off of Echo Valley Road, where you can park and hike from as well. 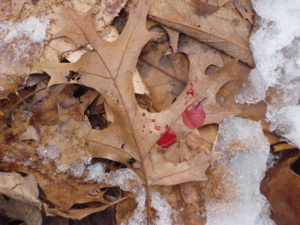 The last third of my hike was through the open hardwood forest filled with colonial stone walls and dotted with hemlocks and pines. This is also the portion of woods where hunters are most likely to shoot things. As my hike came to an end along Hanover Road, I had plenty of time to reflect on this mixed-use and interesting trail. The history, the arguments, the multiple names, the seasonal closures, the sugaring operation… certainly all things I had not expected out here at all.

Of course, I also didn’t expect to find what sure looked like fresh blood drops down the last few hundred meters of trail; it could have been human, dog, or deer, I don’t know. And, quite frankly, I didn’t really want to know. 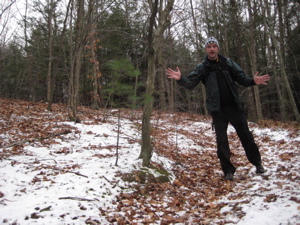 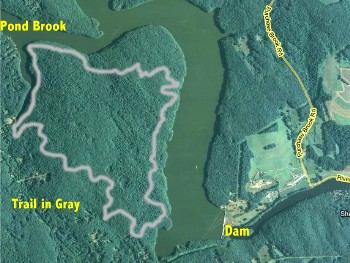 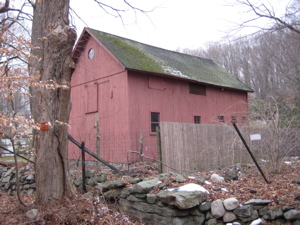