CTMQ > Everything Else > Religious > The Oldest Parish in the New World

Not the Oldest? Parish the Thought!
First Congregational Church in Windsor
107 Palisado Avenue

It’s funny, once you start really researching particular towns, you find that there are always quirky little historical anecdotes worthy of this website. I’ve begun poking around the towns in north central Connecticut and keep finding interesting tidbits here and there. On Windsor’s Palisado Avenue, one finds all sorts of CTMQ-worthy sites. 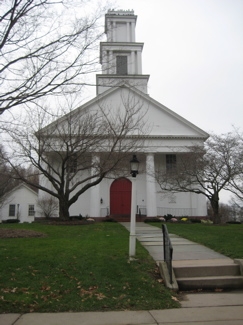 There are several plain old museums on or near the road, five Connecticut Freedom Trail sites, the site of what was once the oldest ferry in the country, a railroad bridge proclaiming Windsor as Connecticut’s oldest town (a constant point of contention down the river in Wethersfield), a monument to shad, and this church, which has two distinct historic claims to fame.

I’ll admit, I’m a bit confused about the veracity of their claims, but no matter what semantic games they play, this church is really old and really cool – and its cemetery does contain a very interesting grave. Everything below is from the excellently written history section of their website. You can click on that link to read more – lots more – if you wish.

Built in 1794, the present building is the fourth for this congregation, but the parish itself is the oldest in the New World, having been “gathered” in England in 1630. The First Church burial ground contains the grave sites of some of Windsor’s earliest settlers. It is home to the oldest legible gravestone in Connecticut, which is the gravestone of Reverend Ephraim Huit who died in 1644. In fact, Huit’s gravestone table is said to be the oldest remaining monument of any kind in Connecticut – and is easily one of the oldest legible gravestones in the entire country. (CTMQ Visit here) 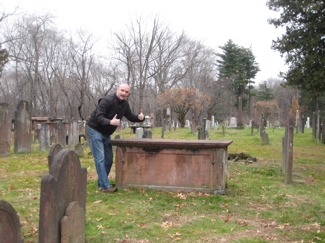 So many names in the First Church story below are known to me. I’ve heard about these guys or read about them in Sarah Vowell’s indispensable “The Wordy Shipmates.” (CTMQ review here – which upon reading it just now, reminded me that John Mason’s controversial statue is also right here along Palisado Avenue in Windsor! This place is crazy.

Anyway, let’s get on with the “oldest parish in the new world” already:

First Church in Windsor, Connecticut celebrated the 375th anniversary of its founding in 2005. It is the oldest Congregational Church in Connecticut and, we understand, the fourth oldest Congregational Church in the world. This is our church now, and at times, it is good to reflect upon those generations of men and women who weathered the storms of conflict and change and managed to keep our church’s spirit alive through the years.

Life in early New England required courage, determination and a belief in the future. A strict observance of the Sabbath, plus a large dose of parental discipline, built strong and noble character. Couple that with an unwavering faith in the Lord and a bit of Yankee ingenuity, and one begins to understand what made and sustained our early church fathers and mothers. 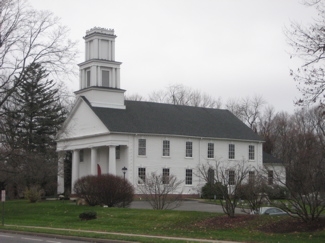 Each new generation could build its future on this rich inheritance from the past. This tradition is why First Church is alive and well today. First Church traces its beginnings back to 1630 in Plymouth, England where 140 men and women placed their trust in the Lord and their leadership and set sail on The Mary & John, the first of 17 ships–the so-called Winthrop Fleet– bound for the colony of Massachusetts. They were a well educated and well-to-do group, many being dignified with the title of “Mister” which few in those days were. These Puritans had strong religious convictions and were willing to endure deprivation and danger for conscience sake. “To put on the full armor of God” were not simply words to these men and women.

The Plymouth Trading Company established the first Connecticut settlement at Windsor in 1633. Word soon spread that Windsor was a good place to settle: the land was fertile, the fur trade brisk and the Indians reasonably friendly and tolerant of the Christian gospel. Thus it was in 1635 that the First Church congregation ventured forth from their homes in Dorchester (Massachusetts) to answer the beckoning call of a new life in Connecticut.

Massachusetts Governor Bradford captured the spirit of these adventurers best when he wrote, “Hearing of the fame of the Connecticut River, they had a hankering mind after it.” And lest anyone doubt the fortitude of the womenfolk in those days, be it known that it was a Rachel Stiles who “pushed ahead and was the first of the bold settlers to set her foot upon the soil of Windsor.”

That the Windsor colony succeeded was due in no small part to its minister, the Rev. John Warham, whose greatest gift to his congregation was his faith. Called “the principal pillar and father of the colony” by Cotton Mather, Mr. Warham must have been an extremely resourceful man, for it is recorded that he preached 24 sermons on one text alone: Psalms 94: 4-6.

He minced no words when it came to battling the scourge of witchcraft in the Windsor community. It seems one Lydia Gilbert, who was known to often violate her Christian obligation of charitable and peaceable behavior, was suddenly accused, in 1654, of a militiaman’s death, which had occurred three years earlier. Clearly, it had been her dark powers, which caused a musket to accidentally fire and mortally wound him. The court decided that it was indeed the devil’s work and ordered her hanged. The following Sunday, Pastor Warham arose to warn of a chastising God and exhorted his parishioners: “You have strayed from the paths of virtue, tippling in alehouses … night walking, and worst of all engaging one another in repeated strife.” 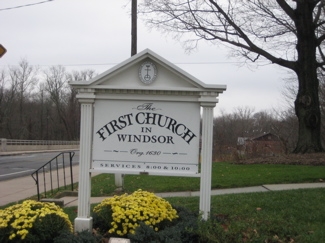 Besides ministering to his congregation, Mr. Warham owned and operated the first gristmill in Connecticut. Having a gristmill in your community at that time would have been a real boon to the ladies of Windsor who, in all probability, had to provide large supplies of bread to feed the troops during the Pequot Indian Wars.

In those early years, the town was the church and the church was the town. Both a pastor and a teacher administered to the church community—the pastor “to exhort, persuade and sympathize with his people and to administer a word of wisdom.” The teacher’s role was to “teach, explain and defend the doctrines of Christianity and therein to administer a word of knowledge.” That was a tall order, but it was a successful enough combination to enlighten and inspire Roger Ludlow, a member of Warham’s congregation, to author Connecticut’s first constitution. (Which you can read about on about 10 other CTMQ pages!)

While Mr. Warham was administering his words of wisdom, it fell to Ephraim Huit, the teacher, to administer words of knowledge about how to build a meetinghouse. This square building stood in the middle of the Palisado Green, and was enclosed in a stockade (palisado), as protection against Indians, wolves and other such intruders. It was covered with a thatched roof, with a cupola in the center; a platform was later added to the cupola for the convenience of the man who beat the drums to warn residents of impending Sunday services—and perhaps threats of attack. ”

Again, you can continue reading their rich history here.

That seemed like a good place to cut them off. Because now you can click here and read about Ephraim Huit’s amazingly resilient gravestone or here to read about the Palisado Cemetery (scroll down) or hop over here to learn about the fascinating story behind John Mason’s statue. Mason was a major player in the Pequot Indian Wars and suffice it to say, present day Pequots aren’t exactly fans of his.