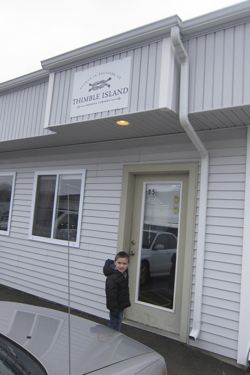 My wife was sick and our little one was just recovering and still not up for a CTMQ trip. Time for the big boys to go on an adventure. So, Damian, where do you want to go?

“A beer place.”
Oh yeah? Cool.
“No. TWO beer places.”
Great, we can do that.
“No, two-THOUSAND beer places.”
Okay, buddy, now you’re being silly. We’re going to do a hike too. Will you do a quick hike with me?
“No! No quick HIIIIIIIKE! NO QUICK HIIIIIIIIKE! NO QUUUUIIIIIIIICK! NO QUIIIIIIIIICK!”
Oooookay. Go. Go out to the car. Stop hitting yourself.

(This is all 100% accurate, other than the fact that I’d planted the “beer place” bug in his head earlier in the morning. This is a typical conversation with my special needs son. Always a pleasure.)

And so, with my wife still in pajamas and holding a box of tissues, I told her we were going to “New Haven and Branford” and she said, “Branford?!” and I said yeah and with that, we were off. Nothing fazes her anymore. Damian and I made a pitstop in Woodbridge at New England Brewing Company because, well, because Damian said we should go to TWO beer places. And because they had their new Coup Beans coffee stout on tap and because I had two empty growlers with me. Don’t be silly. 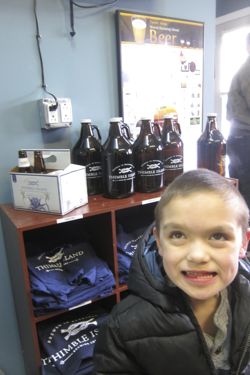 Our NEBCO visit was short and sweet and we were quickly back in the car cutting across New Haven. I noticed a new-to-me ET sign on Whalley Ave (you can see them all here) which was very exciting. We reached I-95 and Branford quickly and I exited to go do that quick hike down at Farm River State Park. After marveling a bit at the precariously perched homes in the Stony Brook section of Branford, I found the lot for the state park and began to make the move to explore.

Damian, however, had different plans. Now, I know he hates walking around outside. And hiking is anathema to him. But I try. I will continue to try and try and try. Unfortunately, he will continue to fight me on it and since it was pretty muddy, I didn’t really see the point in dragging him out there, having him roll around in the mud and then having to deal with all that.

We drove by the Stony Creek Brewing Company’s brewery (an inside joke) and I even took a picture. One more exit up 95 and through an industrial park and into a weird little collection of prefab little office buildings that look like they contain second rate insurances salesmen, dead bodies, repo firms and Aspen Dentals. Definitely not a brewery! 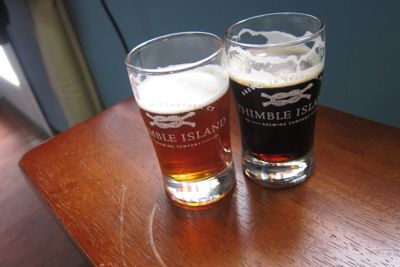 But this is where Thimble Island is, and once inside the front door, almost like Dr. Who’s TARDIS, we were magically in a small brewery with a cool little tasting room! Well I’ll be.

Thimble Island has a good business plan and they are doing thing right. They only made one beer for their first 8 months or so (American Ale) and had only recently added a second (A coffee stout). Their branding and graphic design is seriously some of the best you’ll ever see – I love it. Classy, classic and certainly tied to the coastal towns of Connecticut like Branford. They are working on their bottling legalities and practicalities and we can expect Thimble Island bottles by late spring 2013.

I was surprised at how crowded the little brewery was – and surprised so many people found this place. But then again, after finding Relic and Back East and Cavalry and NEBCO and Hooker and – well, after finding all of them, I’m used to their off the beaten path locations by now. Here’s what the Thimblers have to say about themselves:

Thimble Island Brewing Company was established in Branford, CT in 2010. Our founders are beer enthusiasts who set out to create well balanced, traditionally crafted beers. Prior to Prohibition, the United States was home to over 2,000 craft 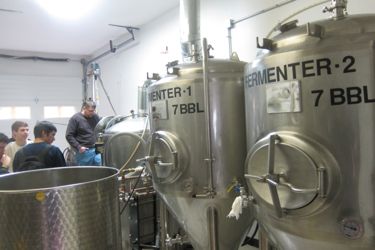 breweries; by the 1980s barely 100 breweries remained. Thimble Island Brewery seeks to recreate the American tradition of having a local brewery that the community can enjoy. Thimble Island. Serious beer for serious beer lovers.

Serious business. The New York Times recently profiled some of the new players in Connecticut. The article started out in Branford, noting, “The brewery’s three employees, including Dave Morgan, the general manager, make beer in their spare time, mostly at nights and on Saturdays. It takes them about six hours to brew an eight-barrel batch (31 gallons to a barrel), which is then fermented and aged for up to a month before being packaged in kegs and bottles. Eventually, the brewery intends to expand its line to include a pilsner and a porter, aiming to produce as many as 5,000 barrels a year.” 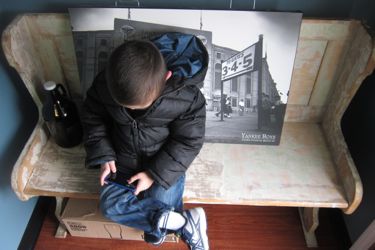 Hm. Like I said, they concentrated on the one American Ale for half a year and then turned out the coffee stout. With NEBCO literally 20 minutes away (if you’re lucky with traffic and lights), I would suggest steering clear of some of the stuff do so incredibly well.

Except… Except I am here to tell you that Thimble’s Coffee Stout was better than NEBCO’s Coup Beans coffee stout. Blasphemy, I know. Both are great, but NEBCO goes overboard with the coffee I think. Thimble Island nailed it. So what the hell, Thimblers, go for it. I’ll support you.

Damian was great during our visit, quietly playing his game while I chatted with the guy serving me samples. He was clearly proud of his product and proud that the label designer was a local and that they want to start locally sourcing hops and things like that.

Their location is totally weird, but it doesn’t matter. (Especially since it’s not far off of I-95 either). They’ve already gotten their kegs into some iconic local restaurants like Lenny and Joe’s. I love that they are approaching this whole thing intelligently, cautiously and pragmatically. Stick with some classic styles, develop a niche, and go from there. 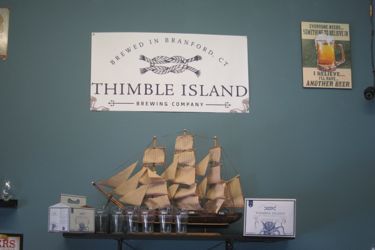