Hands down the coolest thing about this stop along the Heritage Trail is that while reading about the synagogue online, I learned that they have a museum hidden away inside! If only I’d known that the day I snapped these pictures. 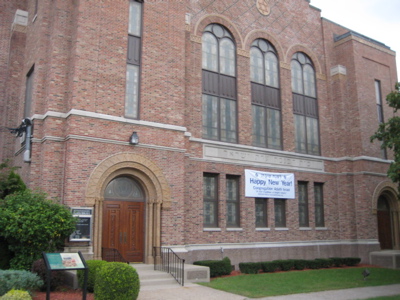 Certainly not the typical looking synagogue, that’s for sure. Before 1900, few Jews lived in Connecticut. During the Colonial era, Congregationalism reigned, and the state’s constitution did not explicitly grant Jews the right to organize into religious societies until 1843. By the mid 1800’s, Jewish immigrants from Germany and Austria-Hungary began arriving in Middletown in small numbers, followed by a large influx from Eastern Europe at the end of the century.

Some of those first Eastern Europeans settled across the river in Portland, attracted to the work available at the town’s Eastern Tinware Company, which actively recruited workers as they arrived at Ellis Island. The first synagogue was in Portland, but soon Middletown’s thriving economy lured most of them back across the river. By 1905, a vibrant community of 80 families developed in the South End, where Jewish-owned groceries, bakeries, and dry-goods stores dotted the streets.

These Jews had to worship in private homes until in 1905 when the General Assembly approved the incorporation of Congregation Adath Israel. This building was built in 1929.

And, as mentioned, it houses a museum! 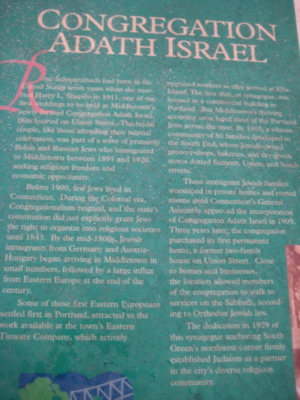 Thank goodness for these signs, or I’d have nothing to say about these places