Erector, All Set
Erector Brewing at NOLO
May 2019

Erector hasn’t brewed anything at this location since right around my visit – and I was never 100% convinced the beers discussed below were even brewed here. The pandemic appears to have officially put the nail in the coffin. The brewer went to Vermont for a while and then moved Bank & Bridge Brewing in Mystic.

“OMG, the nachos at WilliBrew are SO GOOD!”
“Yo, have you tried the pizza at 5 Churches in New Britain?”
“Brah, the burritos at Broken Symmetry in Bethel are LIT!”

You’ve all heard variations on the above before. Perhaps others have mentioned City Steam, Kinsmen, Brewport, or others. (Though not The Crossings in Putnam. No one ever mentions them for their beer or their food.) And then there are the food trucks that pop up all over the state for brewery visitors every weekend. 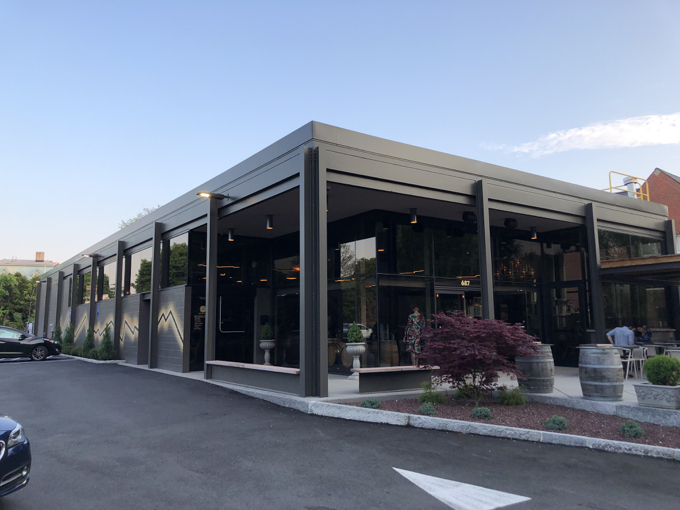 We now have good food at lots of breweries. Heck, one could easily make the case that Connecticut’s longest running current brewery, BAR in New Haven, serves the best food of them all. I’d likely agree with that argument, by the way, with Broken Symmetry’s burritos a close second. Note: I’m writing this in July 2019 so if you’re from the future and some awesome food is being served at some future brewery, don’t jump down my throat – but ask yourself, “is it really better than BAR’s pizza?”

But none of these places serve high-end food. Okay, yeah, New Haven pizza is the pinnacle of pizza, but you know what I mean. But who would squeeze a little brewery into a modearately high-end restaurant? 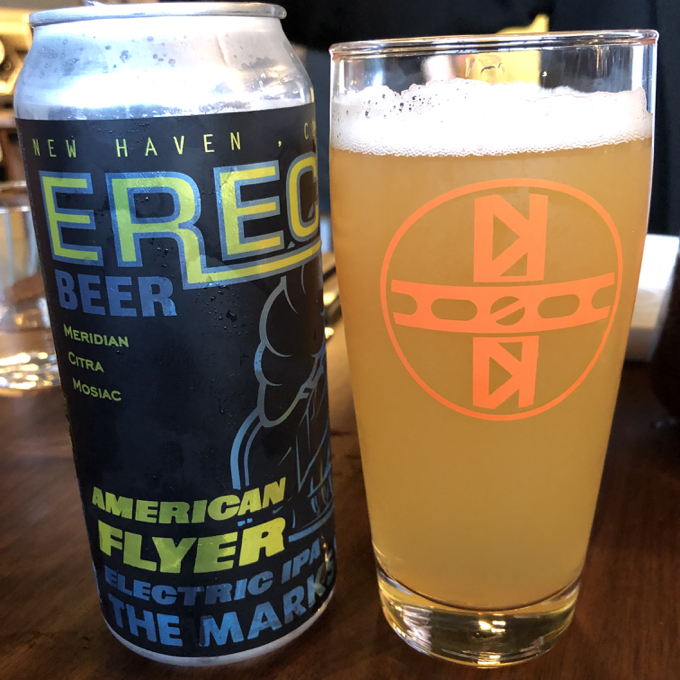 In these heady times for Connecticut brewing, we are seeing many different brewery business models. It can get confusing, sure, but I view this diversity as a good thing. A very good thing. As more and more breweries join the fray, many are adding a kitchen and food service to their offerings. It just makes sense in the face of increasing competition; breweries now offer “experiences” and meals and games and music and all that stuff. They are pubs that make their own beer.

But NOLO is different. NOLO is an Italian restaurant that makes its own pasta. With a little brewery tucked in the corner making some of the beer they sell. More or less.

NOLO is also in a beautiful space. Strangely, the building was home to a dry cleaning operation called Jet Cleaners. The building was designed in 1953, by architect Vincent Amore, and operated for over 60 years servicing the New Haven Community. The building is sleek and attractive: 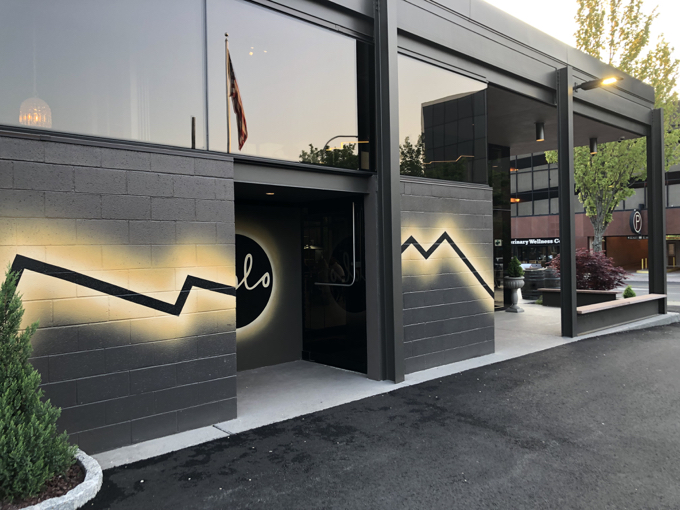 But I wonder, what could make that entrance even more attractive? Oh yeah: 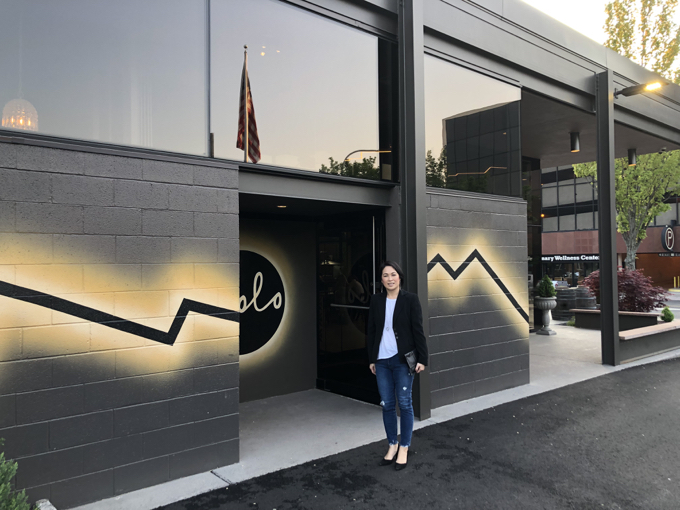 (That’s my wife, not some random woman. I swear.)

I can’t pretend to know the story of how Erector wound up here, but I can give a little mostly correct background. Justin Maturo had been planning his brewery for years. He had designs on his own brick and mortar in the Fair Haven section of New Haven, and used his graphic design skills to pique my interest. I’ve always liked his branding: 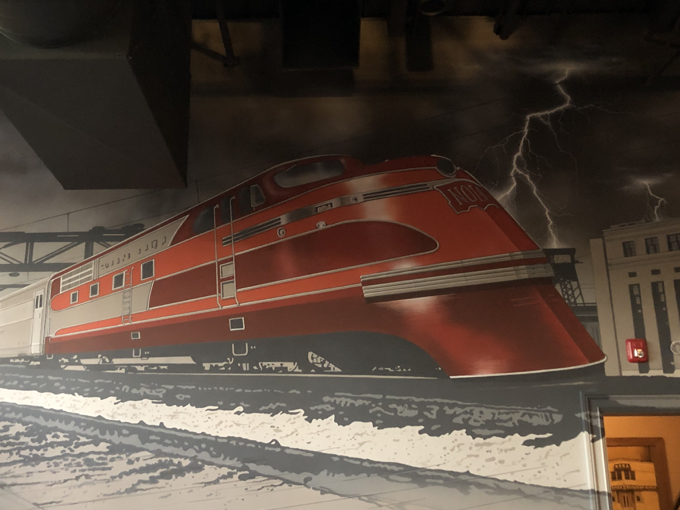 But Erector is also brewing in small batches up at NOLO New Haven. In other words, when you order Erector beer at NOLO, you could be getting beer brewed at The Beeracks or beer brewed in house. Does this matter to anyone on earth? No, of course not. Was it worth my effort to write all that just now? Yeah, if only because I’m trying to show how convoluted the industry has become as it has grown over the last several years.

Okay. Phew. NOLO. Nolo means “freight” in Italian, which I read is the owner’s way of referencing the two large brick ovens here. There’s also a rather awesome mural of a freight train engine on one wall in the restaurant which was painted by North Branford artist Marc Potocsky. (And, for what its worth, the Erector logo is a nod to the old New Haven Railroad’s font and style.) 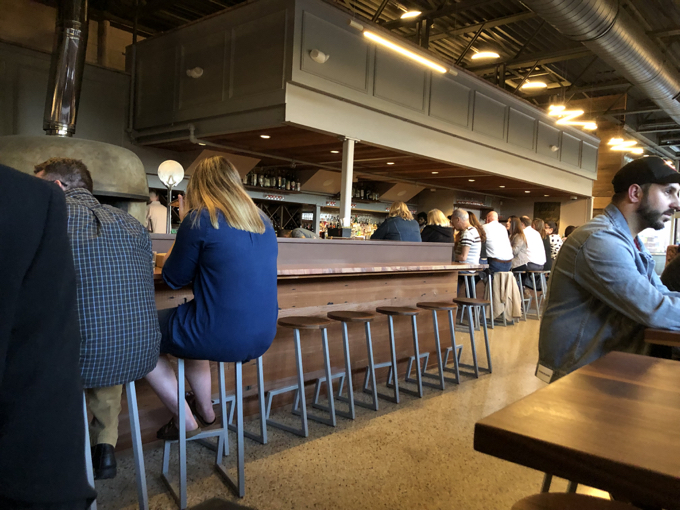 Let’s let the restaurant explain themselves in their own, very odd words:

Hospitality is our enjoyment, we hope our efforts are evident. Our attention to detail will capture your eyes, invite your touch, and heighten your senses. Our aromatic wood fired cuisine will leave you anticipating your next cozy visit. Our staff is committed to creating many memorable experiences for our guests and we look forward to indulging in the conversation for as long as you will join us! 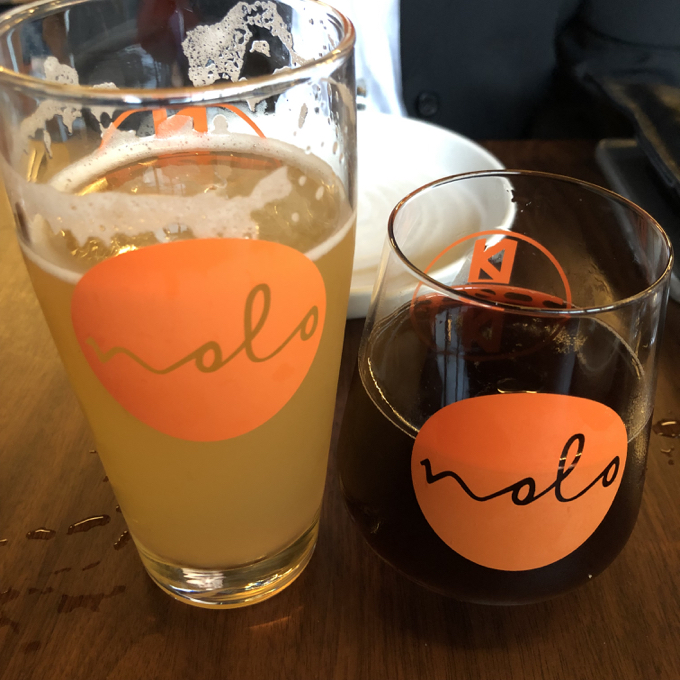 (If I’m wrong, then you’ll be pleased to know that the smoothly polished wooden countertops and barstools come from Fair Haven’s Reclamation Lumber and the speckled purple lounges and lightning-bolt-shaped lights are courtesy of Toronto’s hollis+morris. We good now?) 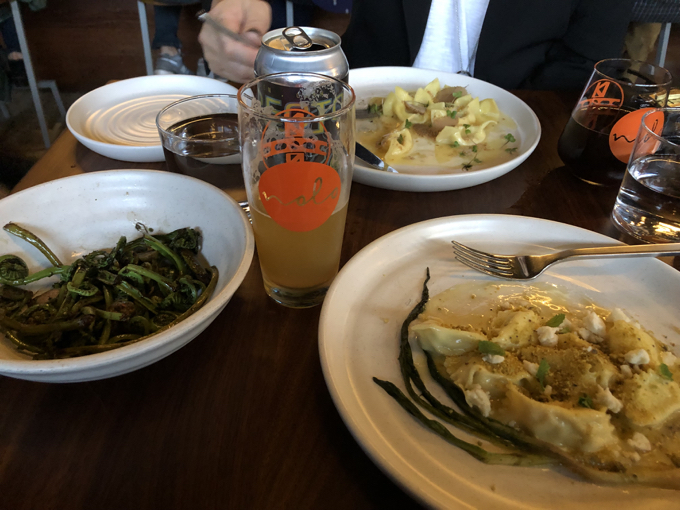 Hoang and I ordered some fiddleheads to share and a plate of pasta each. I had Erector’s Skyflash Dark Sour (some sort of sour with hibiscus, ginger, and peach) and Hoang ordered a can of their American Flyer IPA, which was brewed at The Beeracks. I had asked the server which of the Erector offerings were brewed in house and I was told the sour and the milk stout. I’ve no reason not to believe her. 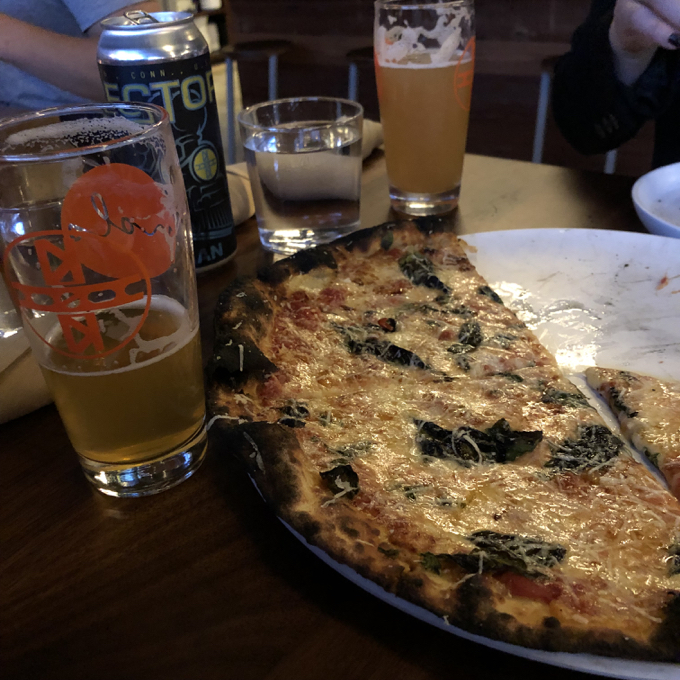 Both beers were very good, but took a back seat to the pasta. The scratch-made pasta is really quite good. The problem with it, however, is the portions are incredibly small, especially when one considers the cost. We each tore through our $16-$18 plates in mere minutes, despite savoring each bite. I think the fiddleheads were around $14. Yes, the food was good, but c’mon, we were still quite hungry.

I should note that as of today (yes, still July 2019), 3 of the 4 New Haven breweries have full restaurant kitchens (here, The Stack, and the aforementioned BAR). This is good. This is how it should be, at least in New Haven. 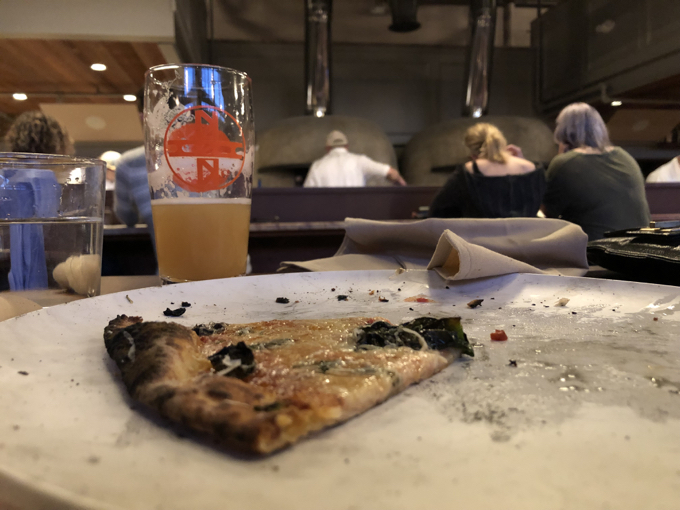 So we ordered a pizza. A tiny little cheese pizza for $13. It was again very small, but again delicious. More importantly, I had the Homeslice Lager and Hoang had another American Flyer. Both beers were fine, but like the pasta, we found ourselves talking about the pizza and not the beer. (Vexed at the small portions here and concerned that the pricing, portioning, lack of parking, and major local competition calculus might doom NOLO. And while we’re at it, can I mention that I read that the NOLO owners are looking to open a place called “Handsome Dan’s” that sells “Detroit-style pizza? In the same city as literally the best pizza on earth? Whuh thuh hell?) 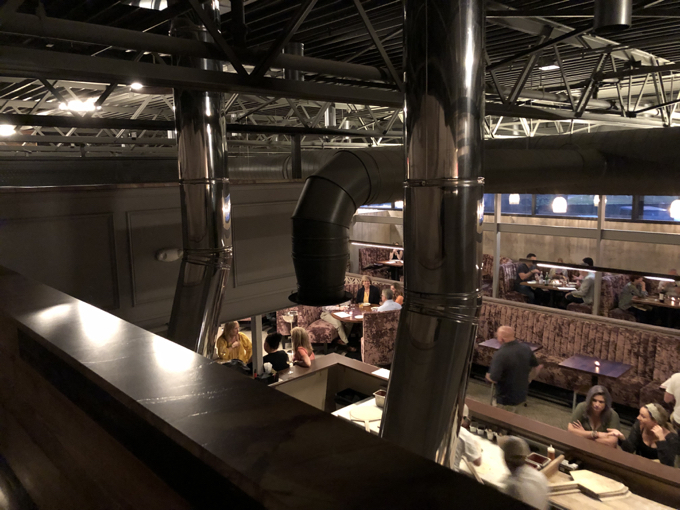 The wine list at the restaurant was extensive and curated. The beer list is an afterthought almost, even though some of it (we’re told) is brewed onsite. The “funny” thing is that Erector would be fine no matter what happens to NOLO, considering their Beeracks relationship. That’s weird, right? We’ve reached a point where there’s a licensed local brewery that is nothing more than a tiny part of an overpriced Italian restaurant in a rad building which may or may not have bothered brewing an in-house beer to have available to you at the time of your visit.

Erector’s beer is very good from what I can tell. Their brand aesthetic is dope. I think their business plan is smarter than most people think. And Hoang and I enjoyed the MGMT show we were in New Haven to see. 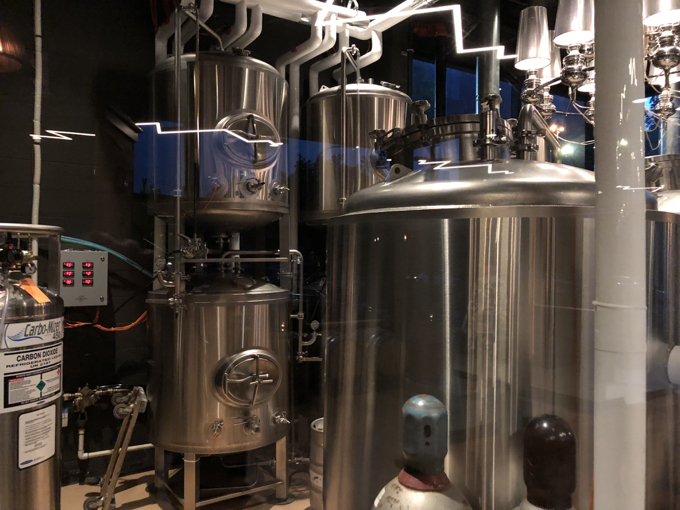