Another gloomy spring Saturday brightened by a trip to another nature center. This was only the fourth one thus far for this website and although they are all very similar, they do each have their own distinct flavor. They’ve all had adjacent nature trails of varying lengths and terrain, but this was the first one nestled deep in a hemlock grove next to a picturesque woodland stream. 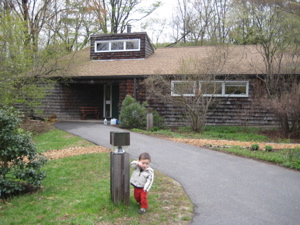 That stream would be the “roaring brook” of course, but more on that later (the stream is a roaring brook, it is not named Roaring Brook). For Damian and I decided to venture inside the museum first, to check out the exhibits. First, this nature center requires a few miles worth of driving into the backroads of Canton. Sure, there are houses along the way, but it certainly has a very remote feel to it.

The building itself looks like a nice house and once inside, that feeling does not dissipate. It has a very “homey” feel to it, and smells of the pine used to build it. Admission is via the honor system and there are three components to the nature center: the gift shop, the auditorium (of sorts), and the exhibit areas. 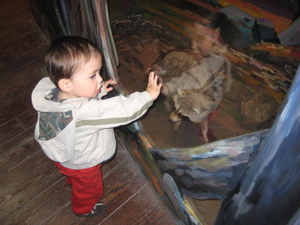 Quickly, the auditorium does contain several tanks of live snakes and other reptiles and amphibians but is mainly used for – get this – the “Roaring Brook Concert Series” (!) I am hardly a folk music fan (and the schedule seems a bit folk-heavy), but I’d imagine relaxing here listening to the dulcet tones of an acoustic performer talking about his or her hard luck would be rather pleasant. Get the right musicians and one could easily be transported to Wyoming or New Hampshire – in a good way. 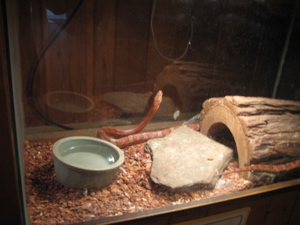 I think every nature center has had a corn snake thus far. This one is the biggest. 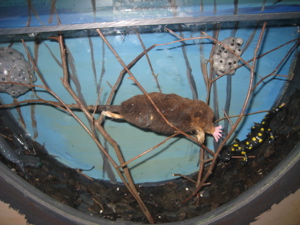 My front yard was obliterated by these little punks last fall/winter. Die.

The indoor exhibits were very well presented and the most impressive of the nature museums I’ve seen thus far. A large (fake) rock cliff dominates the entrance and connects above to a large (fake) tree. Someone knows what they are doing out here (and the museum is actually adding to the realism as I write.) Oh look! Astute CTMQ readers will recognize the artistic brilliance of Ted Esselstyn! 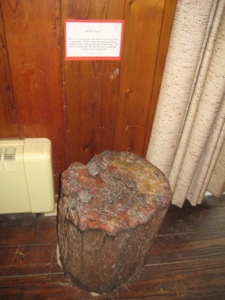 My first exposure to Mr. Esselstyn was over at the (now closed) CRRA Trash Museum in Hartford. Something tells me I’ll be seeing more of his work around the state. 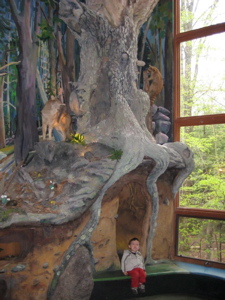 Damian and I immediately gravitated to the little anteroom with a few live animal tanks; Frogs and toads and a few turtles as well. There was also a stuffed turkey and a large bay window looking out at some very active bird feeders. Goldfinches flitted about while chipmunks scurried below. Damian was apopleptic. NOTHING is better than small animals that move suddenly. His laughs and howls filled the room.

There is a display of Native American artifacts as well, and apparently a replica of a Longhouse, but I somehow missed that. I think it may be under construction right now. Oh, and I’d be a fool not to mention the random petrified wood stump. 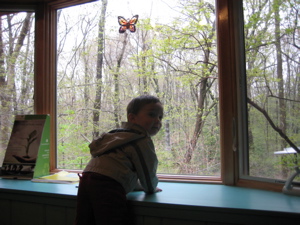 There also happened to be a HUGE book selection for little kids, which tore Damian away from the birds outside – for a little while. In the same room was a beaver lodge. And here’s the thing. Damian usually cuddles/nuzzles soft things that he “loves.” In this case, for the sake of a picture, I said, “Damian loooooves beaver lodges,” and he oh-so-carefully pressed his cheek up against the sticks. It was really very funny to me at the moment, and afforded me the picture here: 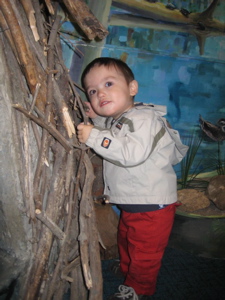 We moved over to the Forest exhibit in the next room with a big fake tree and a coyote and other CT woodland creatures. Interestingly, they also have a “suburban” exhibit with raccoons and opossums and the like. (At home in West Hartford, bears are now nearly just as common.) 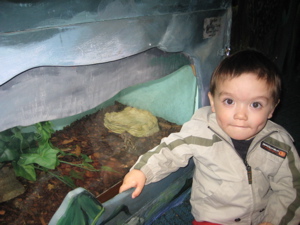 Damian hopped from dead stuffed animal to dead stuffed animal, excited at every turn. I did note a distinct lack of explanatory signs, but they weren’t really all that necessary. There were enough – mostly describing the different niches in the state and which animals thrived where. We hung out for about ten more minutes and then it was time to go outside. 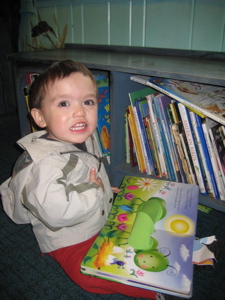 Out front is a nice butterfly garden, but even though it is May, it’s hardly summer here yet so we ventured into the dark woods behind the museum. There is large outdoor cage that I guess contains some animals during warmer months. There are a couple miles of trails and Damian and I hiked a little bit down to the roaring brook we’d heard so much about. 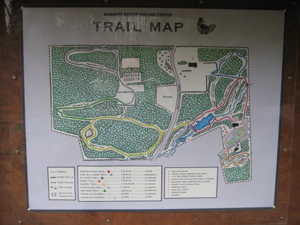 It’s a very nice little escape; as development creeps westward on Route 44 (you’re on notice, New Hartford!), the Roaring Brook Nature Center a couple miles off of it feels like a transporting trip much, much further away.

And for that, I’m thankful. 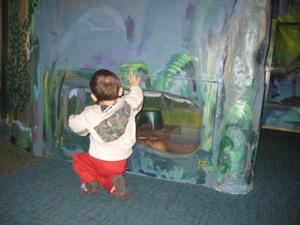 We’ve visited several times since this initial experience. Birthday parties, something to do with the grandparents, etc. We’ve subsequently seen the raptors and the long house and everything else we missed above. It’s definitely a cool little nature center. 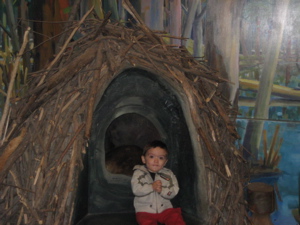