I have the very good fortune of living and/or working rather close to half of these American Society of Mechanical Engineers Landmarks. Bloomfield! Windsor! Windsor Locks! Hartford! If I were a local realtor, I’d totally include this information in with my sales materials. 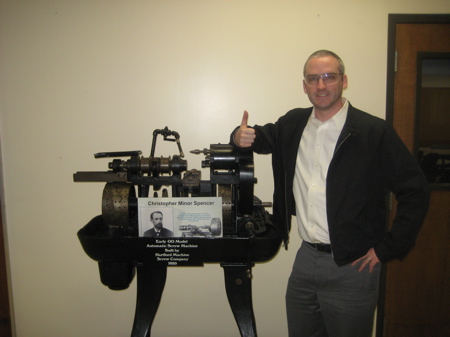 In fact, I just checked and yup, I work smack dab in the center of a hypothetical Christmas tree shaped Isosceles triangle with angles at the Windsor, Windsor Locks and Bloomfield ASME Landmarks. Awesome.

I emailed the Stanadyne HR department’s nameless email address one day, explaining who I was and what I was interested in – and oh by the way, do you have any idea what I’m talking about and am I even writing to Windsor, CT? A few days went by and I received a reply from a gentleman in Stanadyne’s HR department – No, he didn’t really know what I was referring to, but he found my query intriguing, yes he was in Windsor and if the Landmark award was anywhere, it would be in Windsor as well.

We made a date for one late afternoon; I got clearance through the security gate (Stanadyne does make military machine parts) and the hunt was on.

And I even got to wear cool safety glasses. 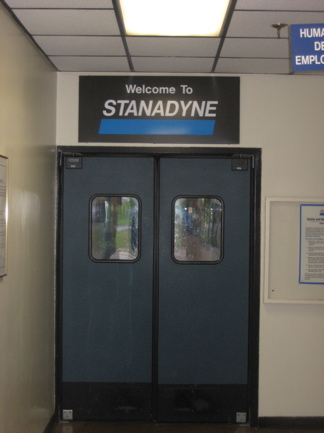 Pleasantries exchanged with Jim the HR guy, I donned my glasses and was walked through a large manufacturing facility. All I can tell you is that it is very loud and that big giant machines making precision metal things there and that it is an impressive place to see – if only for a fleeting moment.

Jim took me to “the old cafeteria” which looked like some sort of break room now, but what’s important to me is that this was where Stanadyne stashed a bunch of its old historical artifacts and museum-quality displays. Aha! Jim was as fascinated by some of this stuff as I was, but he admitted to being almost as ignorant about it as I was – but I’m sure he was merely making feel less incompetent when it comes to manly stuff like diesel engine parts and the like. 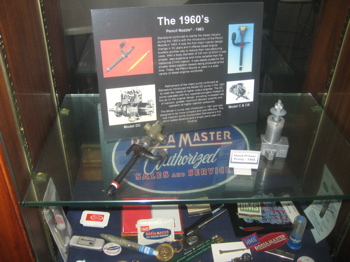 So why is this thing you never heard of an Engineering Landmark? Because it’s an early developmental model of distributor-type injection pump for controlling engine speed, that’s why you big dummy.

Still not “getting” it? Okay…

More about the Roosa Master Diesel Fuel-Injection Pump, From the ASME site:

Mechanical injection forces fuel through a spray nozzle into the cylinders of a diesel engine under hydraulic pressures of 2,000 pounds per square inch or more. The Roosa Master injection pump was the first distributor-type to provide a simple mechanism for controlling the speed of generator sets, thereby reducing its complexity and number of parts. The pump combines a single-cylinder opposed-plunger pumping system to feed all cylinders of a multi-cylinder engine with the concept of inlet metering. This method of plunger action reduces the size and weight from the in-line camshaft system. 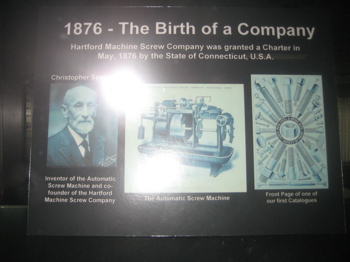 The Roosa Master was manufactured by the Hartford Machine Screw Company (now Stanadyne), which was founded in 1876 by Christopher Spencer for the production of screws and other fasteners on the Hartford automatic screw machine. The company had begun producing aircraft parts shortly after Pratt & Whitney produced its air-cooled engine for the Wasp in 1925.

The rotary distributor-type diesel fuel injection pump was invented by Vernon Roosa in 1941. Ernest J. Willson was development engineer and Leonard Baxter assisted. Roosa’s injection pump concept had come to the attention of the company in 1947 while Roosa was in New York City repairing and maintaining diesel-electric generator sets. In June, Roosa and Willson went to Hartford to develop the concept for the pump, and by 1952 the first contract.

Whoa, lots of info in there. I was interested in the history of the company, back when it was the Hartford Machine Screw Company. You see me standing in the picture above (with safety glasses) with that old machine? Well, check this out – that is the machine that “started it all.” (That wording isn’t mine, it’s on the display.) This is the first automatic screw machine invented by Christopher Spencer! From this first “Hartford Automatic” sprang all the great automatic screw machine industries of the present day (I’ll ignore the obvious joke.) 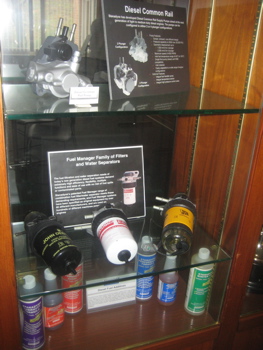 Well, that’s just cool. It’s nice to see a company steeped in somewhat unknown history proudly displaying it in the random old cafeteria room. What’s that? The name Christopher Minor Spencer jogs a CTMQ memory for you? It should… For back at an early museum visit, The Old Manchester Museum they a nice display on one of Spencer’s other hugely important inventions –

Christopher Miner Spencer (June 20, 1833 – January 14, 1922) was an American inventor, from Manchester, Connecticut, who invented the Spencer repeating rifle (one of the earliest models of lever-action rifle), a steam powered “horseless carriage”, and several other inventions. He developed the first fully automatic turret lathe, which in its small- to medium-sized form is also known as a screw machine.

I found some more interesting stuff in this 1992 article from the New York Times. Somewhat repetitive stuff like:

Hartford Machine Screw was established in 1876 to develop what became the first automatic screw machine. It produced screws for the sewing-machine industry and, in the late 1800’s, a booming bicycle business. By the early 1920’s it phased out production of standard screws and began manufacturing custom-designed ones, for businesses like nearby Pratt & Whitney, which used the screws in the first successful air-cooled aircraft engine.

During the military buildup before and during World War II the company prospered in the fastener business, but with the demand for fighter planes down after the war, it began to look to other markets. In 1947 it recruited Vernon Roosa, an inventor with an idea for a diesel-fuel injection pump. The following year it moved to the plant on 27 acres in Windsor, still its home. 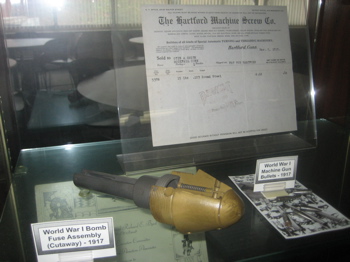 The company’s diesel-pump technology, including products like diesel filters and water separators, has been used in automotive, agricultural, and heavy-equipment engines. During the 1970’s, when the fuel crisis curtailed gasoline supplies and domestic use of diesel engines climbed, the company expanded its Windsor plant and bought two others in North Carolina. The company’s name, which had earlier been changed to Standard Screw, had now become Stanadyne, the “dyne” coming from dynamometer, a device for measuring an engine’s power.

If you clicked on the original article, you noticed that the theme of the article was that Stanadyne, a manufacturing firm in Connecticut, was bucking the trend to move out of state. Heck, in the article the company’s executive vice president, William D. Gurley, said, “We’re here to stay.”

Ahhh, good old 1992. Flash forward 20 years and: Stanadyne: Stanadyne Corp. To Close Windsor Plant by 2011. Please note: the engineering portion of the company will remain in Windsor – and so will my friend Jim from HR.

Speaking of which, despite our best and earnest efforts neither Jim nor I could find the actual ASME plaque from 1988 – but the original Roosa Master Diesel Fuel-Injection Pump is there, with a nice write-up about Vernon Roosa. You can read much, much more about Roosa and his invention in the excellent ASME link at bottom. 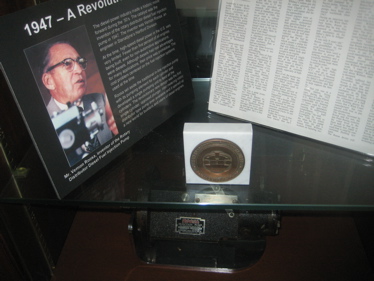 After a few years of writing this website, I’m happily reaching a point where I can better tie together the past with the present a bit better, which not only make the blog a richer and more valuable resource, but makes it all the more fun for me as well.