Having been sufficiently warmed up by my 2.1 mile hike hike down the John Muir Trail, I was ready to tackle the tangle of the Alain and May White Nature Trails, all within Sunnybrook State Park. There are five trails here, plus a short crossover trail; all part of the CFPA’s Blue Trails Challenge. 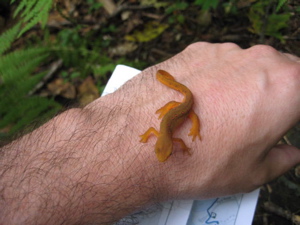 Once I entered the park through the woods off of Newfield Road, a short jaunt into the parking lot brought me to a bronze plaque affixed to a rock. This plaque dedicates the trails to naturalist Jerome “Jay” Bacca of Torrington. Jay and his wife Lorrie developed the trails in the early 1980’s in memory of Alain C. White and his sister May White.

Together the Whites established the 4,200 acre White Memorial Foundation in nearby Litchfield and Morris, and donated substantial lands to early state forests and parks in western Connecticut. Alain White was president of the CFPA from 1923 to 1928. (Of course, the CFPA today maintains and oversees the network of the CT 400(825) trails and publishes the indispensable CT Walk Book that has become my bible.) 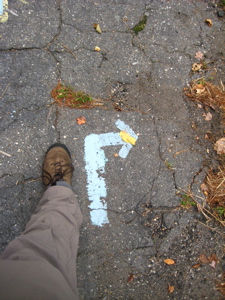 I decided to thwart that bible, though, and hike the trails more-or-less counter-clockwise for no particular reason. It’s a rather flat network, so climbing and descending is not at issue. But presenting the trails coherently is, as always, for me – because at places like this I do bits and pieces of some of the trails as I complete the connectors and loops, then backtrack to my leaving point. You get the point – as if I haven’t stated that point ten times already. Sorry to bore you. 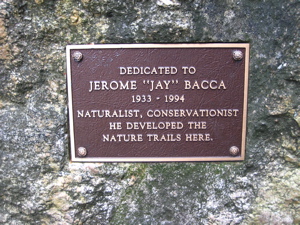 Think of the Sunnybrook/White Trails thusly: The Testone Boulder Trail forms a 2 mile loop – call it the eyeball. The Fadoir Spring Trail is a one mile loop within that bigger loop – the pupil. The Madden Wetlands and Beaver Pond trails are like bloodshot veins between the pupil and outer eyeball. And the Fyler Pond Trail is like a weird growth sticking out of the eyeball – see your optometrist immediately. In that “vein,” I’ll discuss the five trails in order of completion. That’ll work. Maybe. 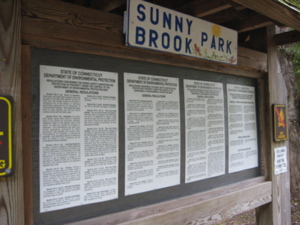 After hiking into the park on the Testone Boulder Trail, I took a right-hand turn onto the half mile long, orange-blazed Fyler Pond Trail. I took five pictures along this stretch, one for each tenth of a mile. How in the world to write enough verbiage to fill the space between the pictures seems rather impossible. 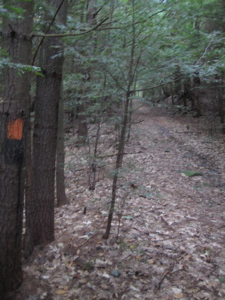 The trail starts out on a wide old woods road.

I like orange blazes. Orange is a good color. I’ll bet this trail looks great a few weeks down the road when the maples are ablaze in orange. There aren’t enough orange animals, don’t you agree? Oh sure, you have your orangutans and tigers and clown fish. But what else? 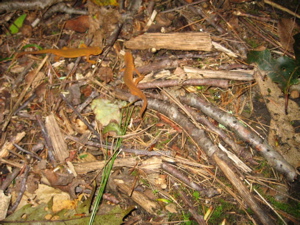 Love those little guys. Shortly after enjoying their company, I took in the scene of Fyler Pond. Formerly a peat bog, this pond was dug out with a steam shovel in the 1900’s. Thanks Walk Book! 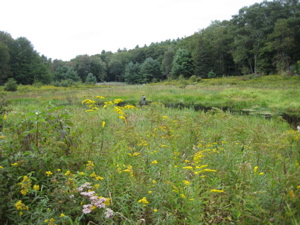 It still looks more like a bog than a pond today, 100 years later

After leaving the little pond, the trail continues northwest, then turns south and follows along a decidedly green moss covered rock ledge. This was yet another one of those times when I wish I a) had a good camera and b) had any skills with which to utilize said camera. As it is, i have neither, so my “widescreen” artsy shot is as weak as ever: 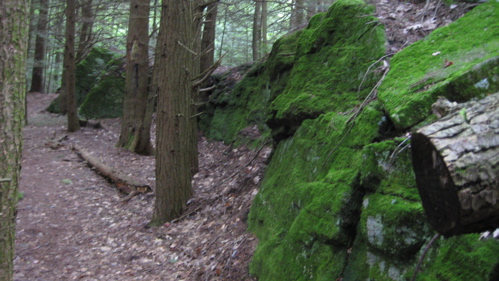 I completed this trail in about 300 seconds, including the time it took to take four pictures. Sure, my pictures stink, but you’re used to that. This trail follows an old millrace to its source at Madden Pond, which the trail views from about 25 feet up a hill. The trail (and pond) was named in honor of William Madden (1914-1986), a naturalist, writer, and educator.

The millrace I followed for about a minute housed the water wheel used in the 1800’s to power the Leech Saw Mill, whatever that was. And the trail passes by two large boulders: 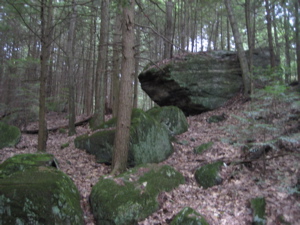 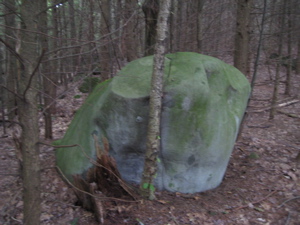 And one is rounded and smooth from glacial action.

I wonder if Fadoir is pronounced “Fah-dwah” or “Faydoor?” I prefer “Fah-dwah” because after all, I was on trail named after a guy named “Alain.” Let’s keep it french. Unfortunately the Walk Book tells me nothing of the name origin or any history of this trail at all. I suppose I could make something up, but that wouldn’t be cool. 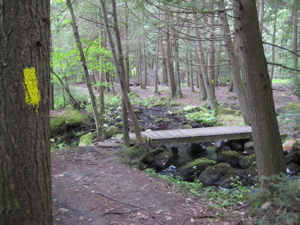 I began the trail from the overgrown “crossover” trail on the western side of the big Testone loops. This trail is the most woodsy of all the trails here I guess, and also hikes along 2 streams for a good portion. The eastern side is very pretty, with a walk along the Naugatuck River. Here, the Naugatuck is barely a “river” but more of a stream.

Check this out – the Naugatuck River is the largest river in the state that begins and ends within the states boundary lines. The river encompasses 39 miles of river from its beginnings in Norfolk down to its confluence with the Housatonic River in Derby. 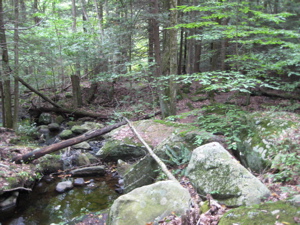 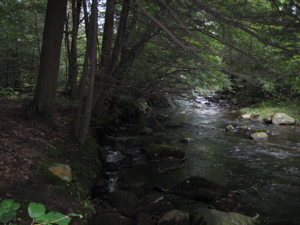 From the river valley many infamous products were born; the process of vulcanized rubber was developed in Naugatuck by Goodyear, Naugahyde the furnishing upholstery came out of Naugatuck, metal clock parts were first developed in Thomaston and the booming brass factory made Waterbury. Without the river and the railroad, that allowed for shipment and receiving of products and raw materials, the river valley may have looked like any other pristine untouched area. 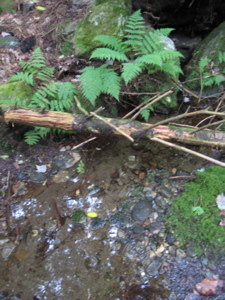 After passing the actual Fadoir Spring, which was pretty weak but very clear, I came upon and old something-or-other that was clearly built to do something important to harness the power of the water. Fine. But then, just below it, there happens to be an old porcelain bathtub. It was (of course) filled with nasty fetid water, so I opted to not go for the funny “Steve in a tub” picture. 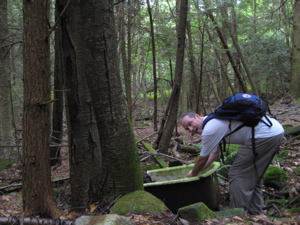 Shortly thereafter, I reconnected with the connector trail and continued along the Testone Boulder Trail. 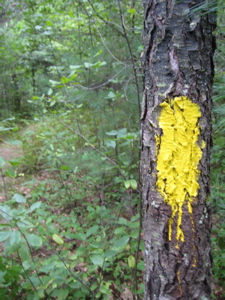 Hey – Alain and May White Nature Trails trailblazers: Eeeeeasy on the glopping, thanks. (This problem pervades the park.)

Hardly a loop, but certainly a trail, the Beaver Pond loop is surely the trail here that the others make fun of. First, there’s the name – I mean, anything with “beaver” in the title is fair game right off the bat. Then there’s the nature of this trail – it sort of starts and stops and lurches to and fro from the other, more important BTOC (Big Trails on Campus).

Plus, it has a giant ugly storm drain with a red arrow (blaze) painted on it. And it shares a couple tenths of a mile with the Testone Boulder Trail. This trail is bleh. 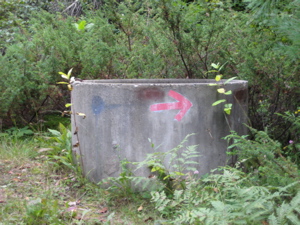 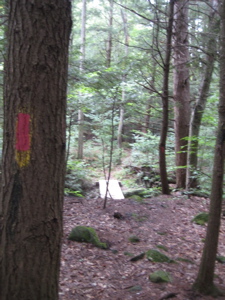 Note the red-blazing overtop the yellow. The Fadoir Spring (yellow) trail was like, “Hey Beaver Pond, you’re lame so you take credit for this section.”

Ah, the granddaddy of them all. At an impressive (not really) 1.9 Miles, this “loop” really is a loop. It carries the weight of being a true blue-blazed trail – the most important color for such things in Connecticut. AND, it has the coolest name. 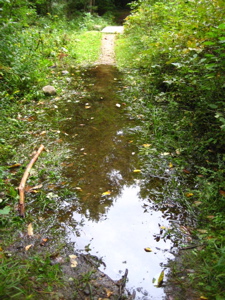 The Testone Boulder is a large glacial erratic named in memory or Connecticut mineralogist Dino Testone (1914-1991). Either Dino was unable to travel out of Torrington, was blind, or just wanted to be sure to have a rock named in his honor – because he called his namesake boulder, “the largest split boulder I’ve ever seen.”

Hellooooo?! Bible Rock in Haddam? Can I get an amen? Actually, I’ve seen bigger ones scattered all over the place, but I don’t have a cool name like Dino Testone (a mineralogist with “stone” in his name? C’mon!) 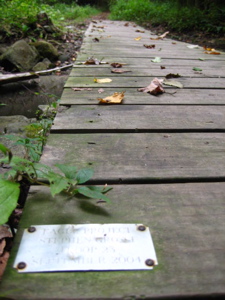 This was the trail I used as a jumping off point for all the others. It begins back in the parking lot and travels along a closed paved road. I took the right-hand turn off the road, immediately had to navigate a ponded part of the trail and then passed the junctions with the Fyler Pond and Fadoir Spring Trails. After that, the trail becomes very pretty and turns into a windy rocky trail through moss covered boulders.

I enjoyed the southern tip of this trail the most in the park I think – but not just for the Testone Boulder: 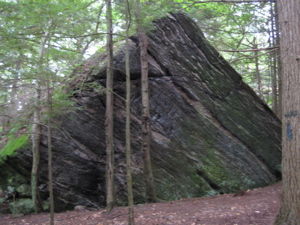 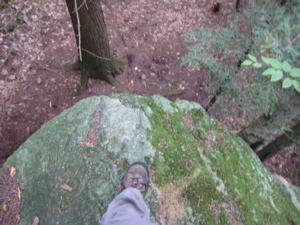 After the excitement of the boulder, the trail crosses a stream, and then bursts forth out into a large grassy field with a model airplane airport and a little pond. Weird. I hadn’t read my trail description and didn’t expect that at all. The blazes disappear for a while here (but it’s not really possible to get lost either) as I made my way up the old asphalt road. 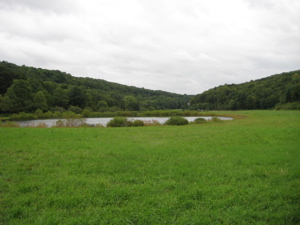 I was initially confused by this field and pond… 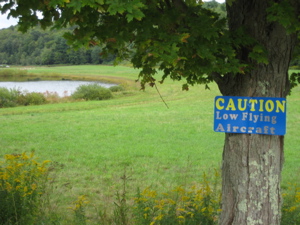 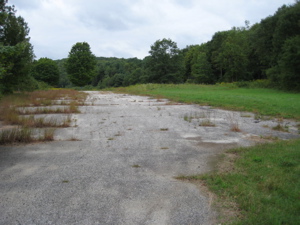 But then I just kept walking along this rotten old road and was fine.

The trail (road) crosses the Naugatuck River one last time and I made my way out to the parking lot area again to hook up with the John Muir Trail again, this time heading north up to Burr Pond State Park and its Wolcott/Walcott Trail. 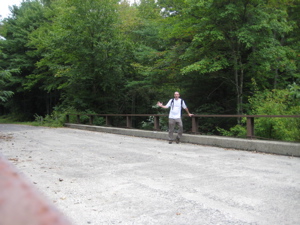