Quick! What’s the hottest, hippest, and coolest thing in all of Andover, Connecticut? You guessed it, it’s the little covered bridge over Hebron Road, just off of route 6 and next to the town’s history museum. 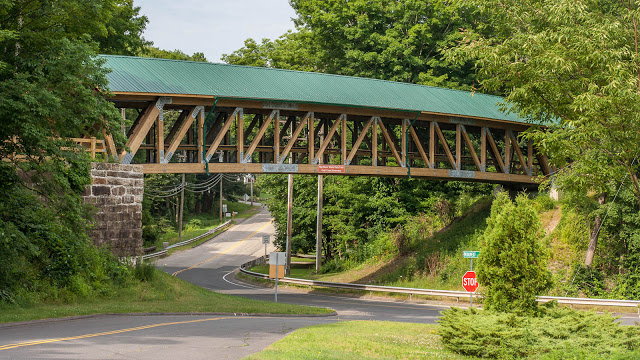 I’ll add a bit more at the bottom, but Peter will provide you the relevant background.

The Empire State Building took 410 days to complete. The Golden Gate Bridge a little under four years. The pre-fabricated bridge to cross a pair of old train trestle abutments in Andover?

A decade, and counting.

When it is completed, the quaint, covered bridge will allow hikers, bicyclists and horseback riders to travel uninterrupted along the Hop River State Park trail, west to Manchester or east to Willimantic.

Since the planning for the covered bridge started in 2001, the project has been held up by numerous design changes, hearings, meetings, manufacturer concessions and excuses by Echo Bridge Inc. of Elmira, N.Y. More than $418,000 in state and federal funding has been pumped into this little bridge, which still sits, unfinished, at the manufacturer.

The latest holdup? A lawsuit between Andover and Echo Bridge Inc. of Elmira, N.Y., over who should pay for state-mandated improvements to the structure is heading before a judge in the spring.

“I’m feeling old,” said Sawyer, who pointed out that she was a busy mother back then and is now an equally busy grandmother. “I’m counting on a few leprechauns to make an appearance. Nothing else has worked. You know how frustrated I am, but I have no control or power in this.”

“Frustrating” is the right word for it, as the lack of a bridge has created a glaring — and dangerous — gap in the 20-mile trail. Hikers have had to travel down a high embankment along a rocky side trail, climb over a pair of guardrails, cross Route 316 near Route 6 — both busy, hazardous roads — and then clamber up the other side to return to the trail. It has become one of the more embarrassing gaps in the 3,000-mile East Coast Greenway work-in-progress that runs from the Florida Keys to Canada. 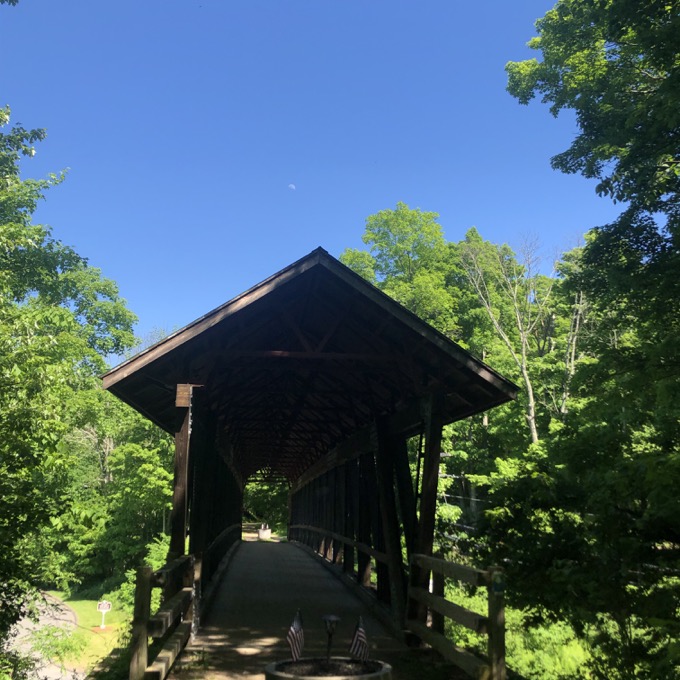 My word. I had no idea – as the bridge’s beginnings predate CTMQ’s beginnings in 2006. Marteka wrote another column once the bridge finally became a reality.

During the summer of 2002, this intrepid newspaper columnist wrote about a covered bridge coming that would span two abandoned railroad trestle abutments. Now, after more than a decade of false starts and non-believing, I am proud to report that, “Yes, Andover and Hop River Trail enthusiasts, there is a covered bridge.”

For the past decade, I thought the bridge was hanging out with Santa, the Easter Bunny and the Tooth Fairy. But in the middle of the afternoon on Tuesday, an 18-wheeler from Ehco Bridge Inc. of Elmira, N.Y., rumbled down Route 6 and brought in the first section of the bridge to a staging area off Route 316.

Two more sections will follow next week and then work will begin to connect them. A crane will be brought in to lower the 25-foot-high bridge onto the old Hartford, Providence & Fishkill Railroad abutments and hikers, bikers and walkers will be able to safely cross over the roadway and continue their journey to Willimantic, or Manchester and Vernon.

There had been rumors — again — swirling for the past month that October would be when the bridge would arrive. William D. O’Neill, a member of the Connecticut Greenways Council, gave me a heads up in September that the annual Connecticut Greenways Council awards would be held Oct. 21 in Andover at the bridge site. And it would be pretty embarassing for all if there was no bridge there.

“This will sound like a recording,” he wrote in a September e-mail. “The covered bridge will be installed in Andover before the end of this October. From the lips of the owner of the bridge fabrication to my cell phone. Never doubted.”

As Rob Dexter, Connecticut East Coast Greenway ambassador, pointed out in an e-mail, “miracles do happen.” Some just take longer than others.

I’m rather glad I wasn’t aware – or waiting with bated breath – of and with this bridge’s travails. I would have been going as crazy as Peter apparently was.

It’s a lovely bridge and has the veneer of being old when it is certainly not. While riding the trail with Calvin, I used the ol’, “We’re gonna ride through a covered bridge” carrot on the end of the stick to keep him motivated. It worked, and you should come out to this part of the state and do the same. 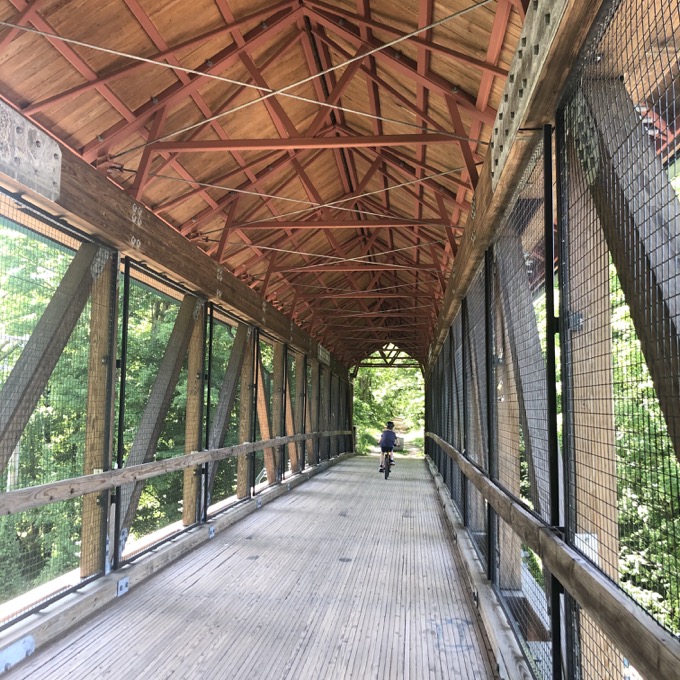