Here we are, together again. About to discuss yet another tiny Connecticut brewery no one ever talks about or seeks out. Owned and operated by a (surely) well-meaning guy whose friends all told him that his free garage homebrew was the best beer they’d ever had. He cobbled together a few bucks and opened the tiny 2bbl brewery in a Mystic commercial building basement. 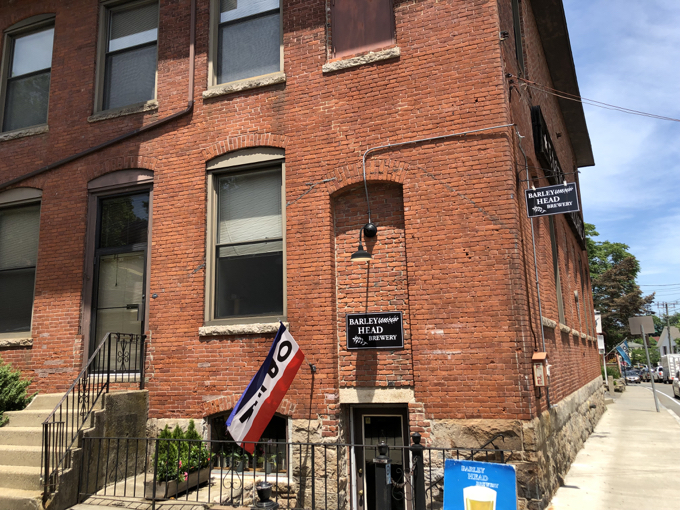 Said owner is Drew Rodgers and props to him for knowing what he likes and how he wanted to do it. After all, how many breweries have opened since the Great IPA Awakening in America named themselves after a grain? Probably less than 1% across the land. I recall reading during his build-out that he wanted to focus on traditional beers. 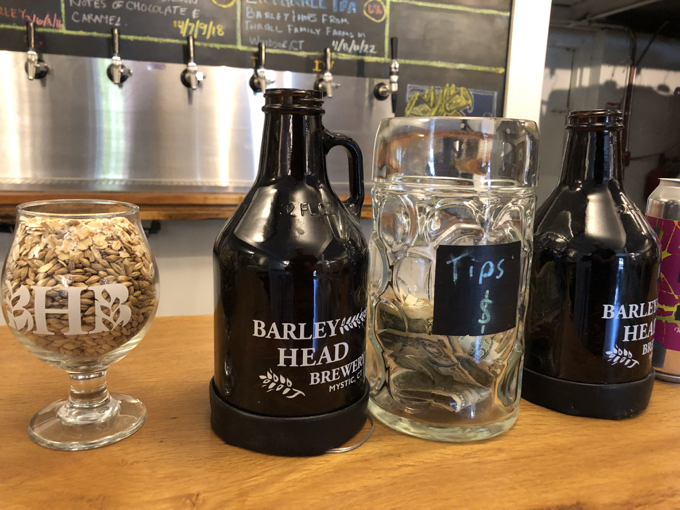 I figured he was small enough that he could get away with it. With no plans to distribute in any meaningful way, it appeared to me that Barley Head was almost a hobby brewery.

Then I thought about its location. On the Groton side of Mystic, right on Water Street near museums and high-end restaurants, right in pretty much the only tourist-centric area in Connecticut. That ain’t cheap. And parking for the brewery is nigh impossible in the summer. 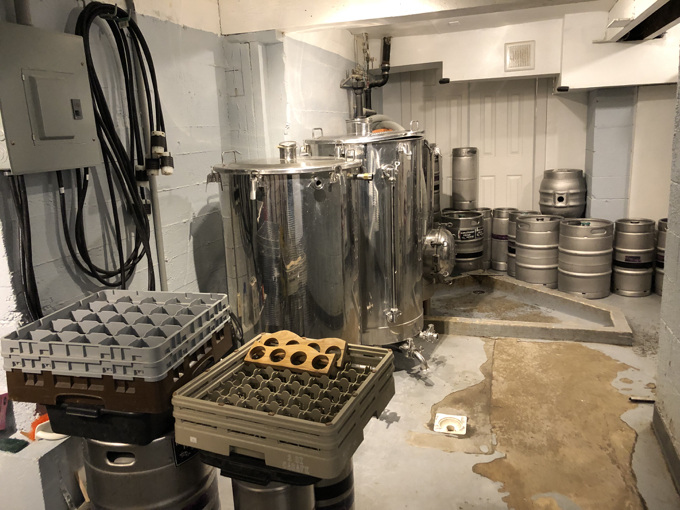 Rodgers was (and is) relying on foot traffic and random passersby more than anything else. And if that’s your business plan, there’s literally no better place to set up shop than in Mystic.

Barley Head is tiny. Not just in production, but in taproom size. It is located on the ground floor, mostly underground, of a big building. There is room for maybe 30 patrons at a time, and even that would be tight. Don’t ever expect a vast line-up of taps… for obvious reasons. (They do offer local Jonathan Edwards wine, however.) Food can be brought in from any of the dozens of nearby restaurants, although there’s really not much table space at which to eat it. 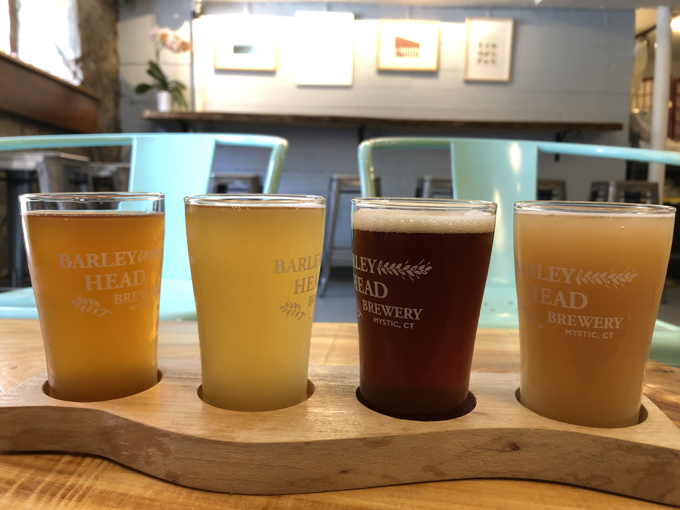 Located in the heart of downtown Mystic, Barley Head Brewery is a nano-brewery and bar. Our 2 bbl brewing system allows us to make a wide variety of beers, offering something for everyone. Our beers will change each week. We will strive to have 4 to 6 beers on tap that showcase the versatility and range of flavors that can be achieved in a brewery. Many of our ingredients are sourced locally, sometimes from the brewer’s own garden. Our beers are available by the glass, the growler, and in cans.

Yeah, Barley Head plays up the whole “local” thing, highlighting locally grown grains (frequent) and hops (rare) when they are used in production. I contend that no one actually cares a whit about that anymore. Average consumers care about taproom experience and location above all else – yes, above quality of beer too. 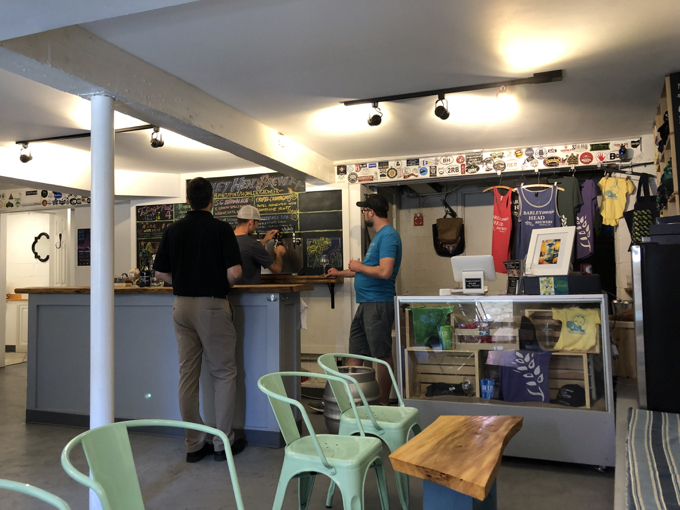 I arrived at opening and ordered a flight of four tasters. Whoa! There’s that Mystic rent! FOURTEEN dollars for 4 little samples. That’s… extraordinarily expensive. But I get it… lots of guests must be tourists and tourists expect to pay a premium I guess.

The little space is decorated and lit as well as they can do such things I guess. There’s even some relatively comfortable wall benches at which to sit. The guy serving me was pleasant enough and when I was wavering on a choice, he helpfully pointed out that “the brown ale gets good reviews on Untappd.” Wow, pushing a brown ale – I admire the gumption.

So I chose the brown ale. 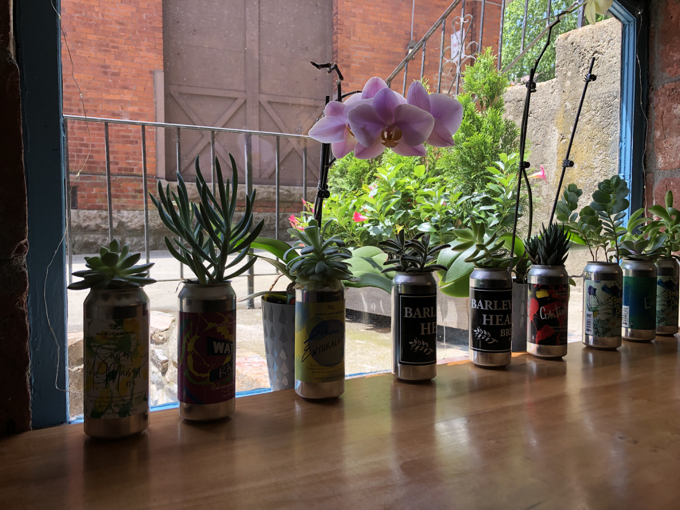 There were 6 options in total: Saison, Kolsch, Tripel, IPA, and stout. Wow. Drew Rodgers is sticking to his guns, two years into his run at the brewery. I chose the Saison, Kolsch, brown, and IPA. Where was I? At a brewpub in 1996? I kind of loved it… but still had to drink it.

As I sat, other people started filtering in. Yes, tourists. I think this business plan may just work. Another factor working in their favor is that Tree House is located across the street. 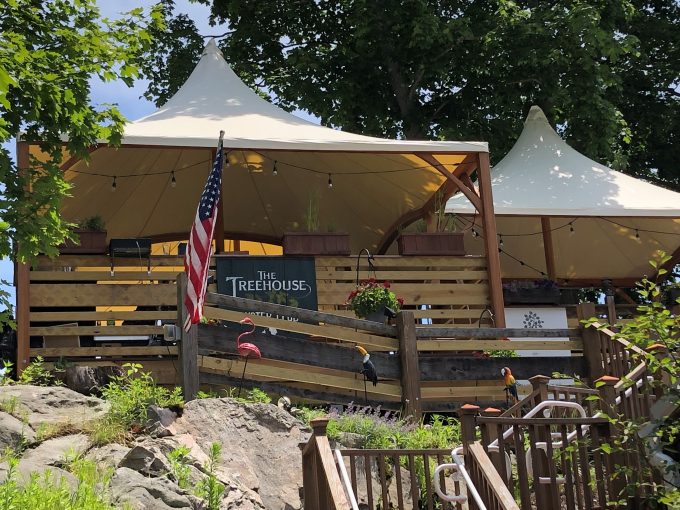 Excuse me? That’s not Tree House Brewing? That’s part of The Oyster Club? Eh, it still may get confused drunks here. And man, there are some really top-end restaurants around Barley Head – several of which have top-end taplists to boot. I just checked a few and… no Barley Head on tap at the Engine Room. Oh well, maybe someday. 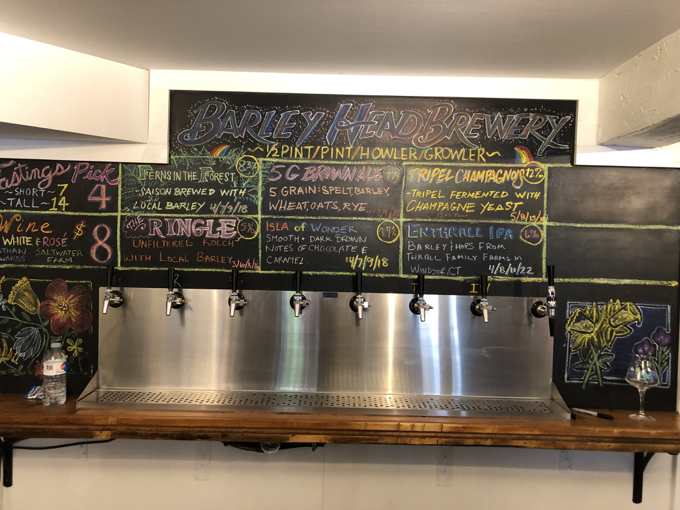 Up first, the Saison. The intent was there, as it tasted like a typical saison. Which, these days at these lesser-heralded breweries, should be seen as a victory. I’ve read a lot of Barley Head reviews from their early days that weren’t too kind. I was pleased that the first beer I had wasn’t in the terrible column.

On to the Kolsch, which is spelled “Kolch” on their taproom blackboard. Which, normally, who cares. But really, a brewery should spell a classic beer style’s name correctly. 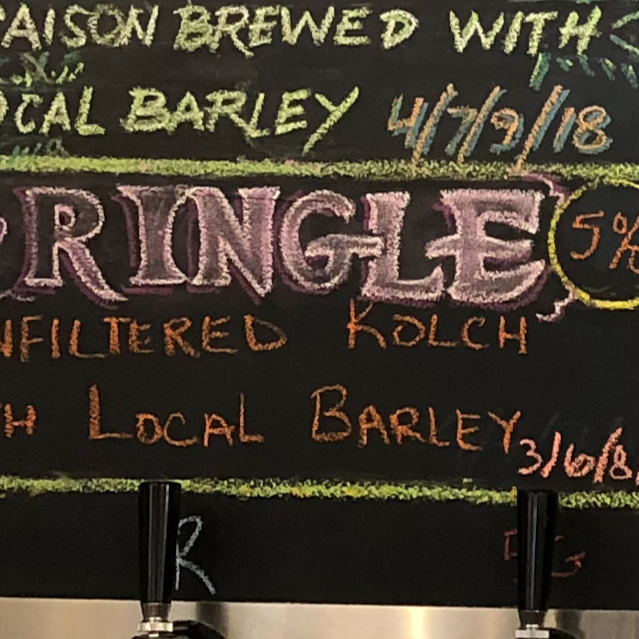 As for the beer itself, again, it was fine. Mid-tasting, three men showed up in khaki shorts and golf shirts. It was their first time at Barley Head, and then engaged in a fascinating discussion of what a “microbrewery” is versus a “nanobrewery.” They were intent on defining what the threshold is for nano to become micro and kept trying to one-up each other with useless knowledge. My kind of people.

Except for the khaki shorts, golf shirts, and loot. 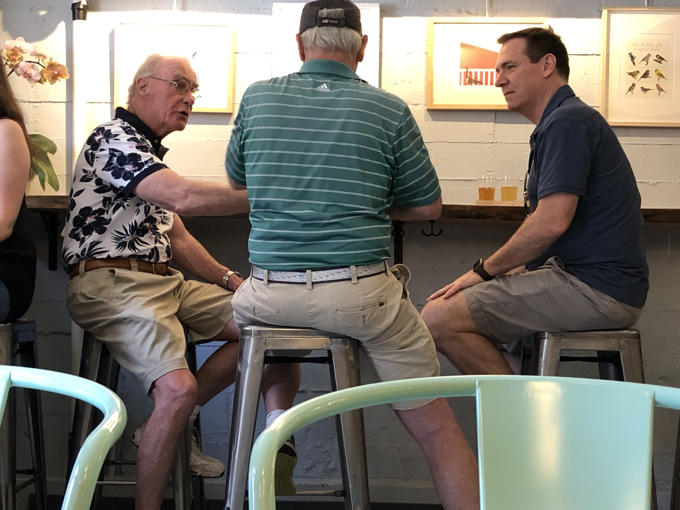 I was initially entertained by their comments but began drifting away from it. Then one tried the kolsch and said, loudly, “this tastes like a kolsch I guess.” Then another tried the tripel and laughed. Realizing their rudeness, they became quieter but let’s just say they knew what a tripel was supposed to taste like and this wasn’t it. 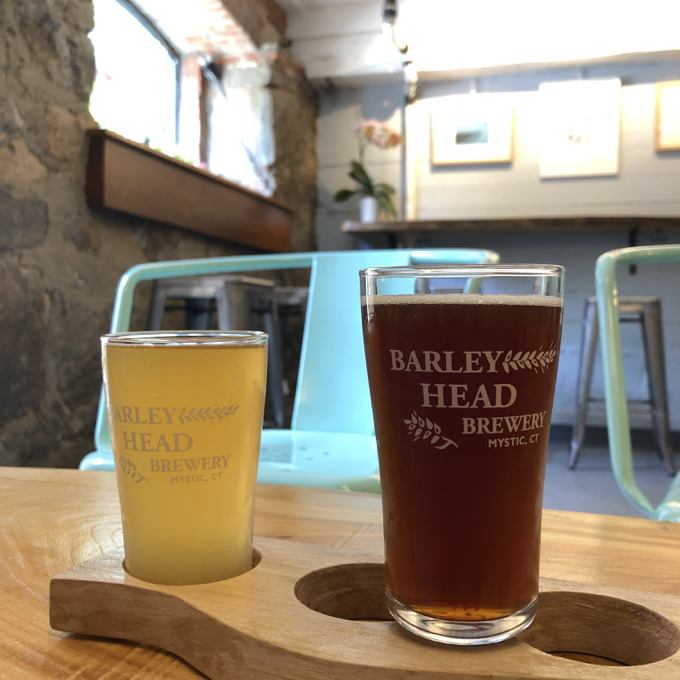 As I sipped the “well reviewed” brown ale, which tasted like a brown ale, the older guys became really fascinating. One guy sold a building to Berkshire Brewing. And sold land to Long Trail. The other guy was going to buy Stonington Vineyards but didn’t pull the trigger. The first guy was going to buy Berkshire Brewing, but also pulled out because of differences with the company’s “president.” (He called him a [redacted] but I can’t print that.)

Oh, and despite their apparent ability to buy and sell expensive businesses and properties, they also complained about the $14 taster charge at Barley Head. 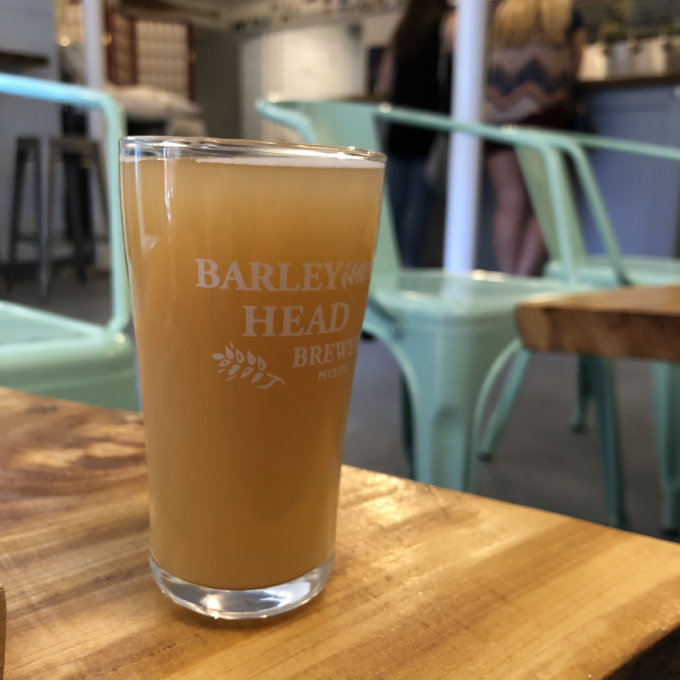 I finished off my Barley Head experience with the IPA which was terrible. I sort of like that it was terrible in the sense that the brewer a) Named his brewery after barley, and b) said he only cared about the classic European styles. But yeah, the IPA was still green and muddy and a rather poor attempt at being a 2019 beer.

By the time I left, seven others had filtered in on a weekday afternoon. This tells me that as long as Barley Head doesn’t start serving garbage water, they’ll be okay. Foot traffic in downtown Mystic is a heck of an equalizer. 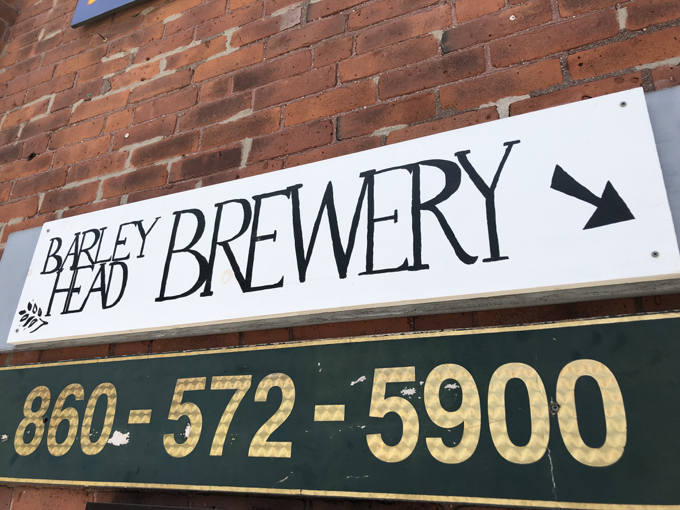