My friend Adam and I have an ongoing inside joke between us that isn’t suited for this family website. (Although, this page is about a brewery so it’s not really a family page.) It involves the baddest of the bad words and the town of Putnam. Basically, anytime anything is mentioned in Putnam, we use the colorful descriptor before saying or writing “Putnam.” 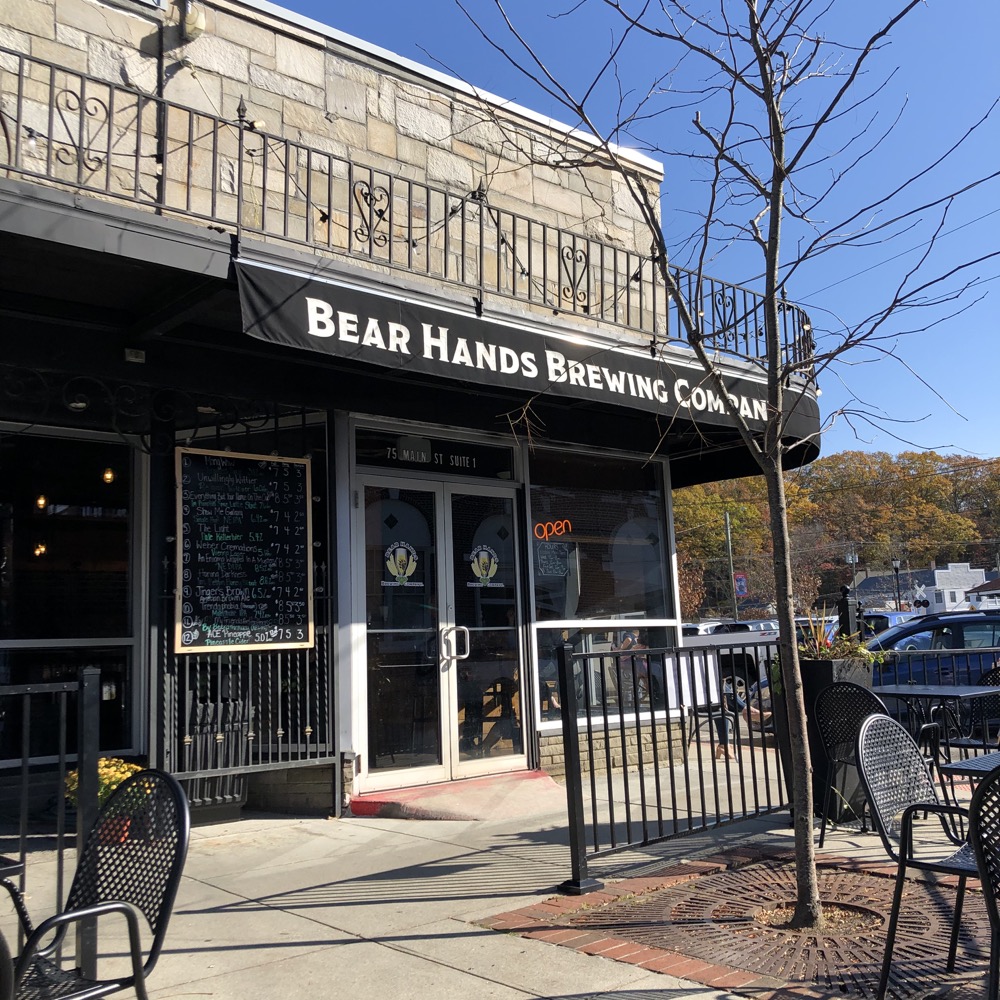 Because it’s Putnam. He lives in Milford and I live in West Hartford, so Putnam is difficult to reach for both of us. (So are some other western Connecticut towns, but Putnam somehow became a thing between us.)

Putnam has had a rather forgettable extract brewery no one ever mentions – The Crossings Restaurant and Brewpub. Then along came Bear Hands with another one called Centerline Brewing shortly thereafter. All three within sight of each other, which just makes the already oddly hip downtown blocks of Putnam even better. 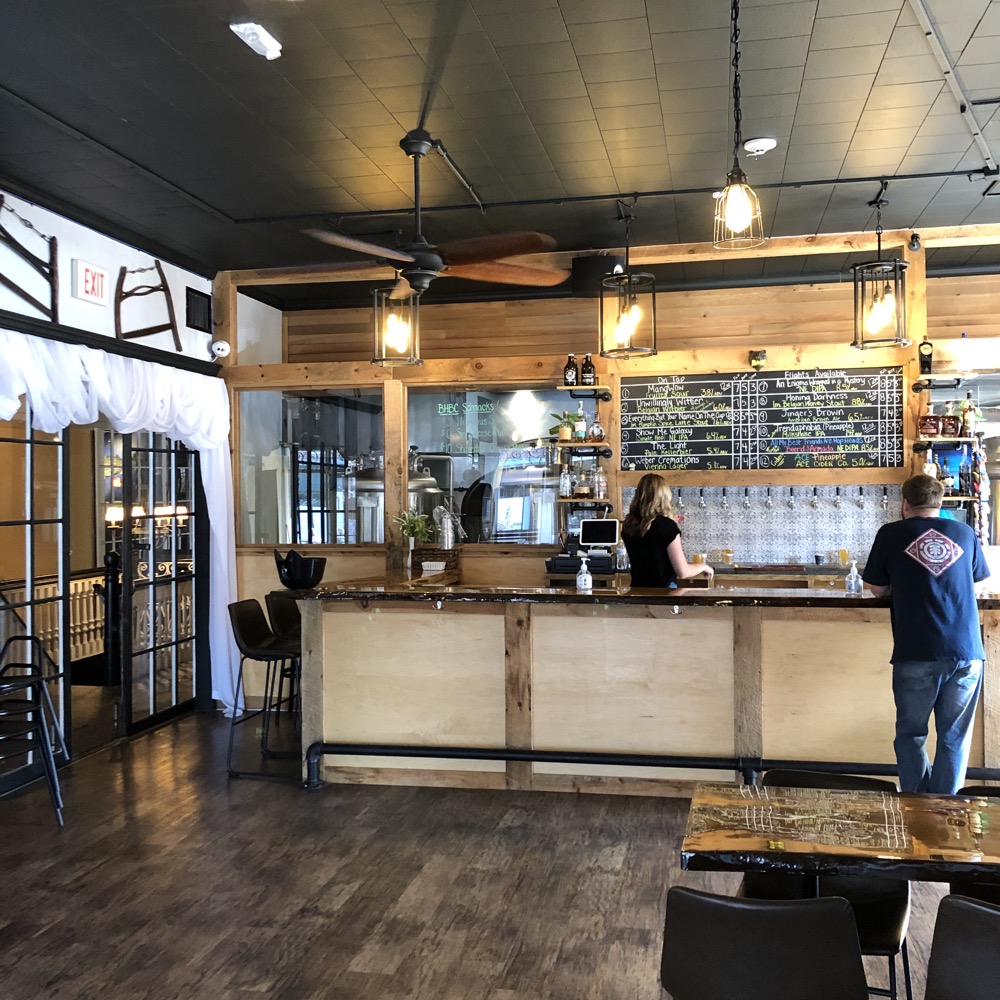 Putnam in the Windham County/western Rhode Island area is like Austin in Texas. A cool little oasis of decent restaurants, breweries, and art galleries in the middle of, well, a larger area not like that. And Bear Hands only adds to the things to do there.

I planned to meet-up with another friend named Rick who lives nearby. (He’s quick to explain just why he lives nearby, and is sure to let you know he’s not a typical Swamp Yankee.) Rick is an experienced homebrewer and knows a lot of the same people I know in the industry. He’s also super into Dungeons & Dragons, but I won’t hold that against him. 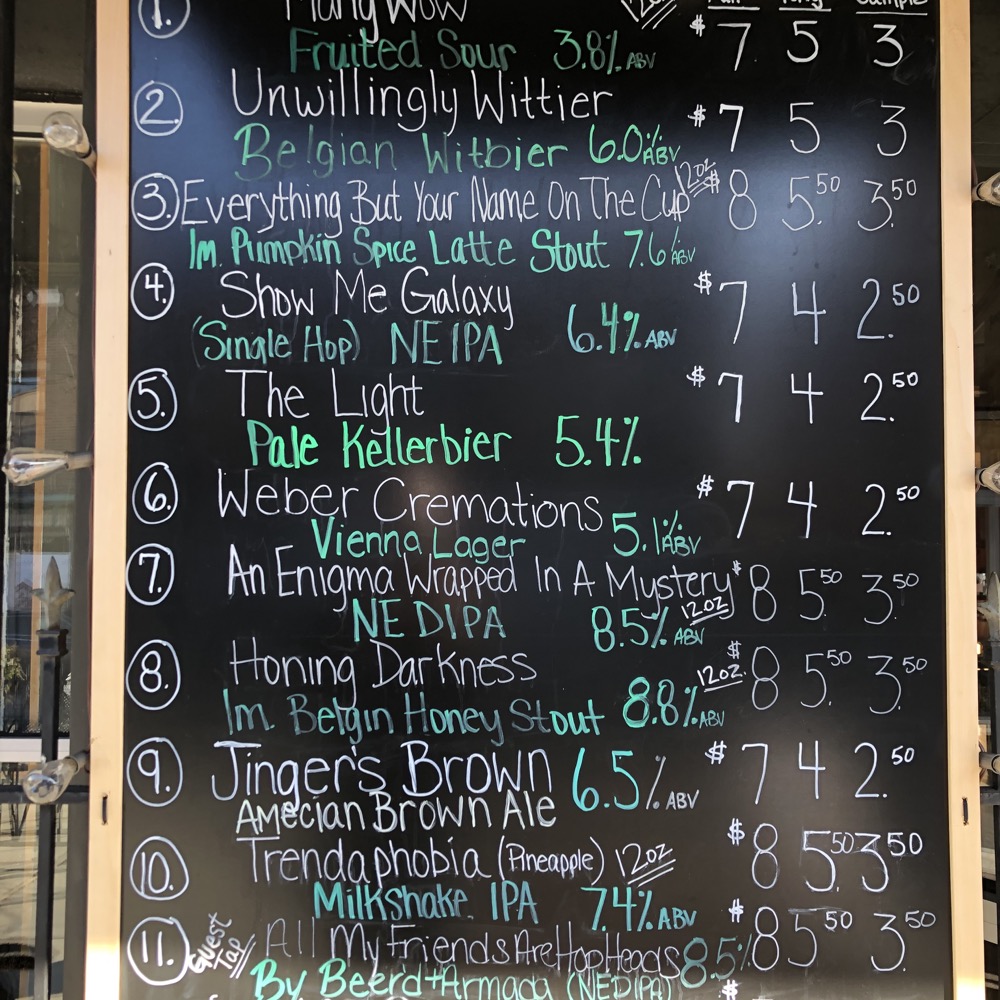 (Says the guy who has been visiting and writing about museums and stuff for 15 years.)

It was a beautiful afternoon and I’d been doing some hiking in northeastern Connecticut. Time for some beer. I parked, entered, and found the taproom rather inviting and decorated in an unobtrusive yet fairly unique way. Bear art! Funky things. It fits into the Putnam aesthetic really well. 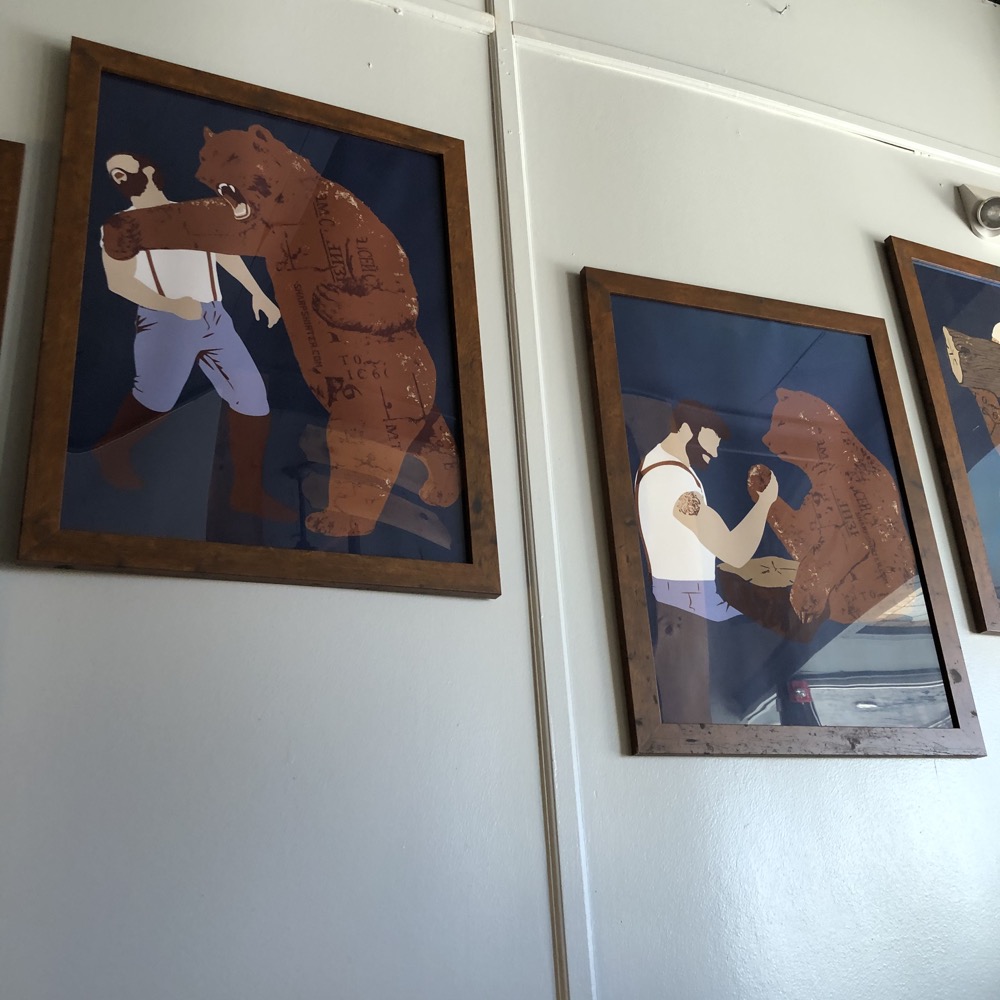 Bear Hands Brewing Company is Us. My husband Justin, is the brewer and I Kayla, am the business.

Eesh. That was awkward. How many more commas have you got to spare, Bear Hands?

… We took Justin’s 14 year homebrewing hobby, to the next level. After, the good feedback from our inner circle, we started traveling all around CT, from beer fest to beer fest. Pouring our beer for the masses, and again the feedback was great! That’s when we took it upon ourselves to formulate a business plan to open our very own Brewery and Tap Room. We wanted to make brewing a career so we could share our passion for beer and atmosphere with everyone. After, three long years of highs and lows we accomplished what we set out to do, our brewery doors are finally open! Bear Hands Brewing Company’s charming home is in the quiet corner of downtown Putnam, CT.

I’m sold. For I too have a “passion for atmosphere.” It makes me feel… alive. 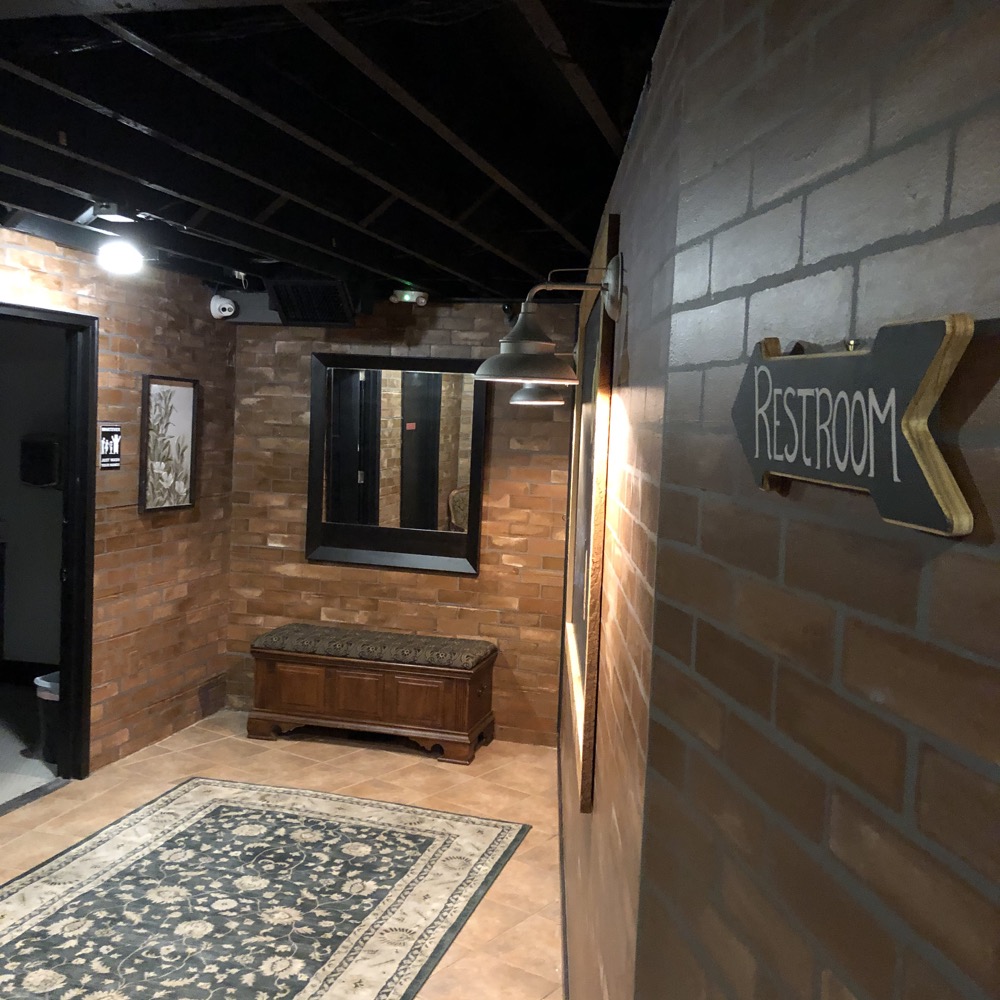 (Being out in @#^$ing Putnam, I’m sure Justin and Kayla have no idea who I am and that this is just what I do. To everyone. [Smiley face emoji to make everything okay]. And hey, one look at South Bend, Indiana’s inevitable “Bare Hands Brewery” website, we’re doing just fine here in Connecticut.)

Once at the bar with eager servers at the ready, I immediately liked this place. A lot. “Boring” beers! Standards! In spades! Not only that, serving size options ranged from flights to ponies to pints! Honestly, if everything else here was terrible, the fact that they had such a good mix on their tap list and sell pony sizes puts them way ahead of other breweries in my mind. 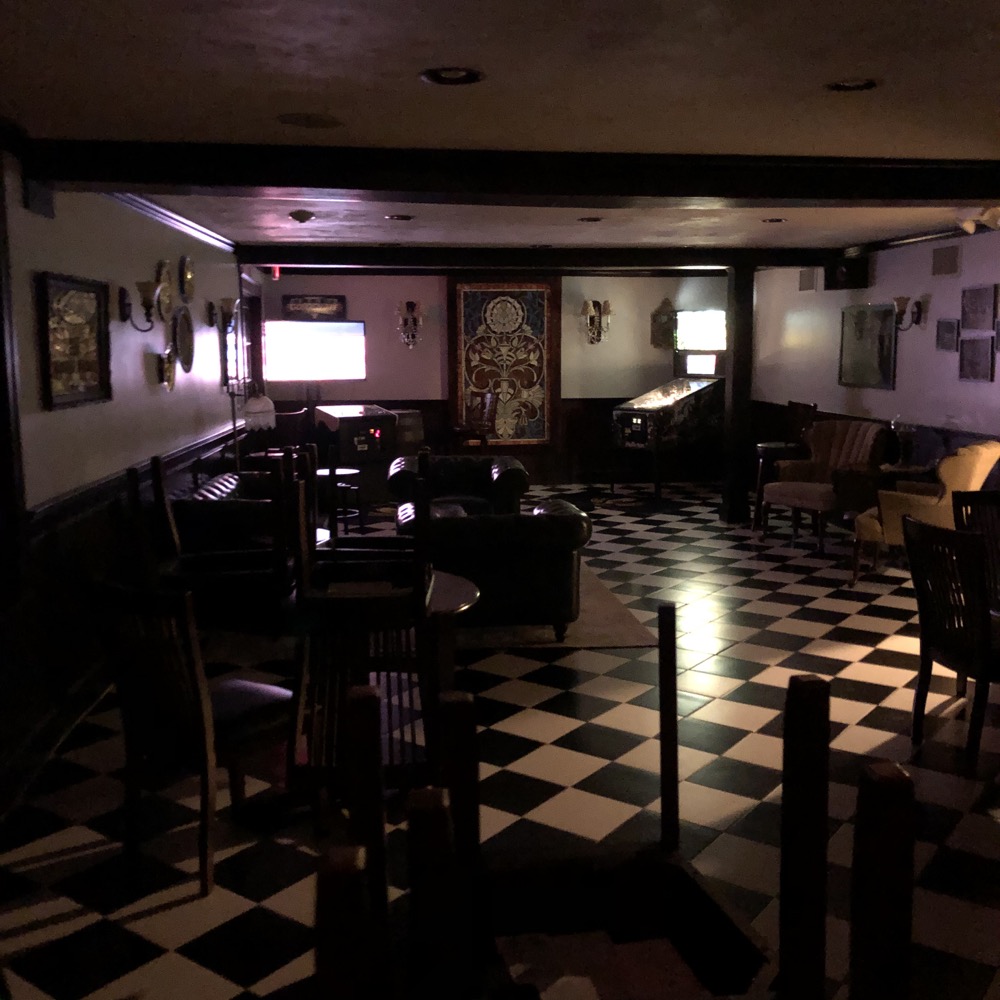 The building used to be a restaurant named Bella’s Bistro. It was a fairly expensive and generally well-liked American-Italian place, but the Bear Hands crew gutted the joint and pretty much only saved the floors. And they did a great job.

There’s a lower-level that is a “secret prohibition-style” lounge used for parties and overflow patrons. It’s a unique feature of Bear Hands and is pretty cool – and came in handy during pandemic spacing requirements. 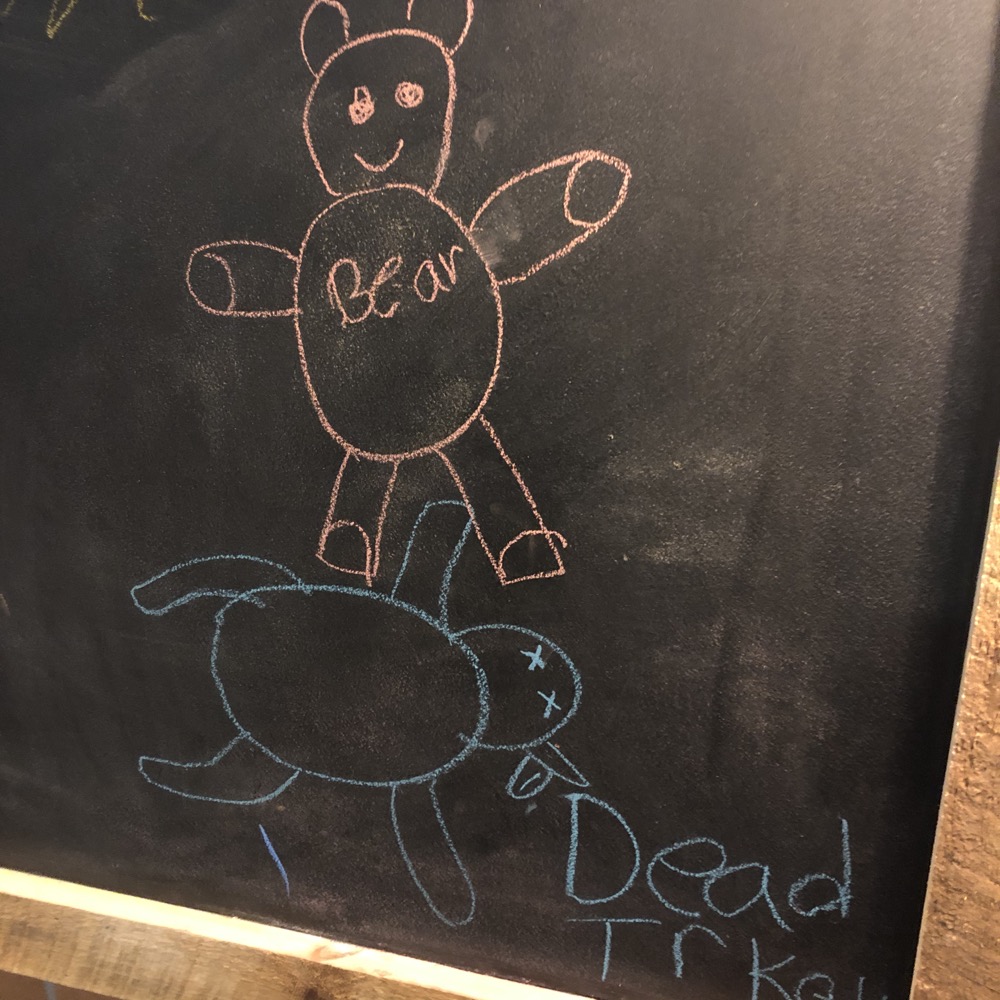 I joined Rick outside with my flight. I could see The Crossings over his shoulder and he could see where Centerline Brewing will be over mine. All in @#^$ing Putnam!

I had their witbier which was a bit too lemony for me, but it was pretty good. The Kellerbier tasted too much of those baby biscuits we all tried when our kids were teething. And whichever stupid “milkshake IPA” I tried was as horrible as they all are – which is to say lots of people probably love it and it sells out quickly. (The server brought me a sample just so I could confirm that dumping lactose into an IPA is the worst beer trend of my life.) 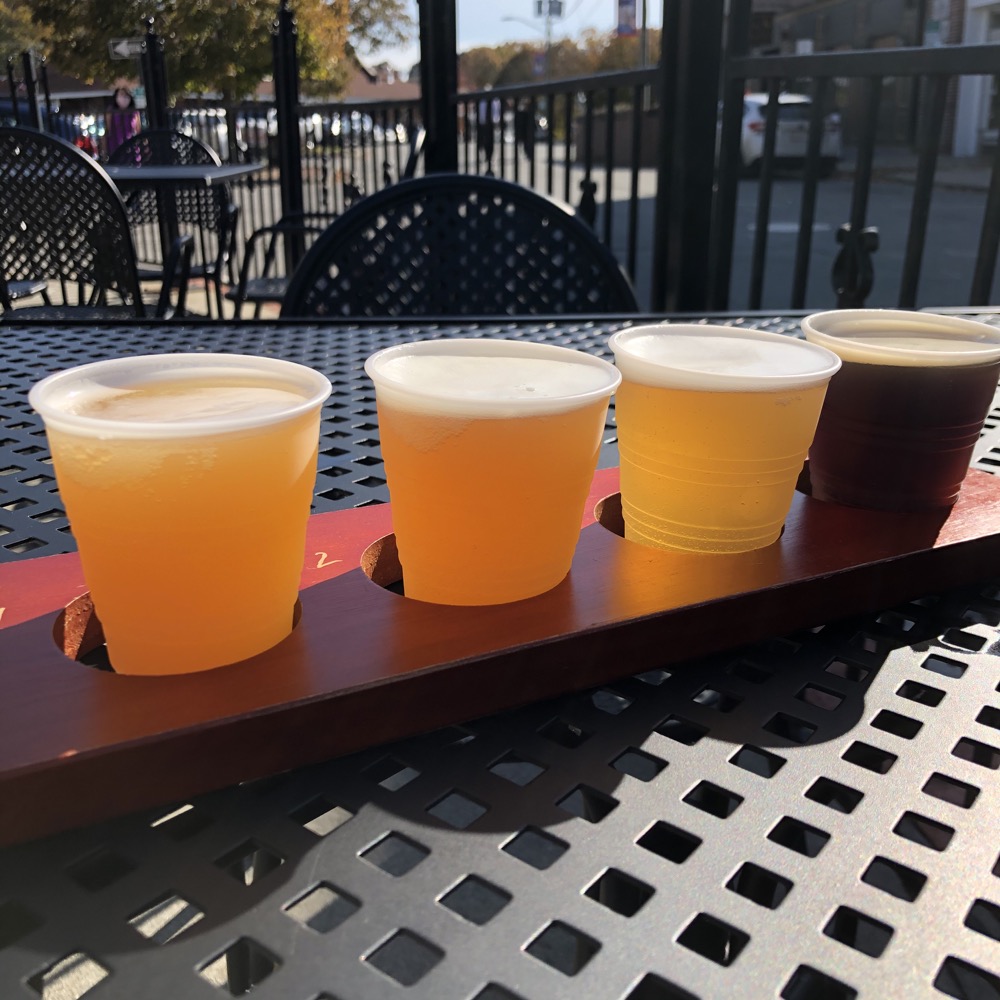 My conversation with Rick was excellent and wasn’t solely about beer! We talked family and kids and travel. Getting old isn’t so bad, I swear. And neither is the beer here. We also discussed the gun sitting next to us with his wife and baby – oops, I meant the guy sitting next to us with the gun on his hip. I guess you can never be too careful in – checks map – freaking Putnam, Connecticut. 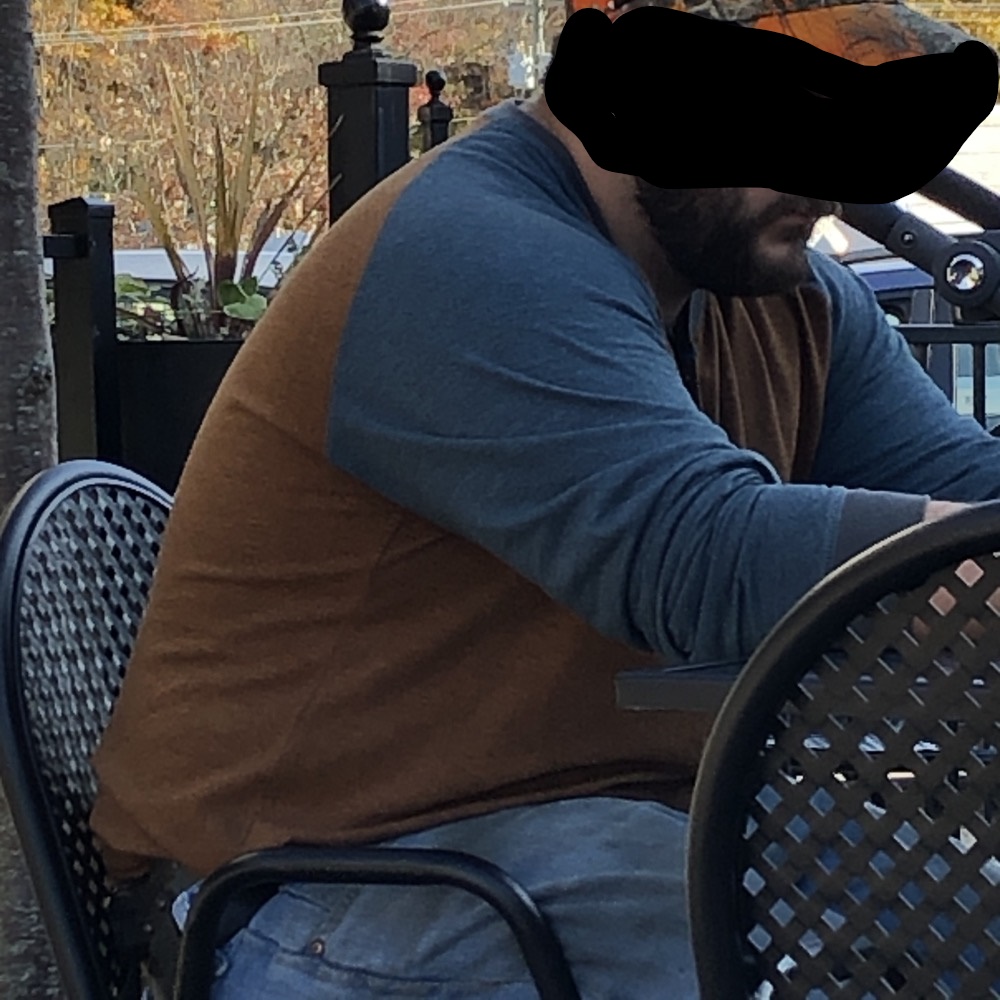 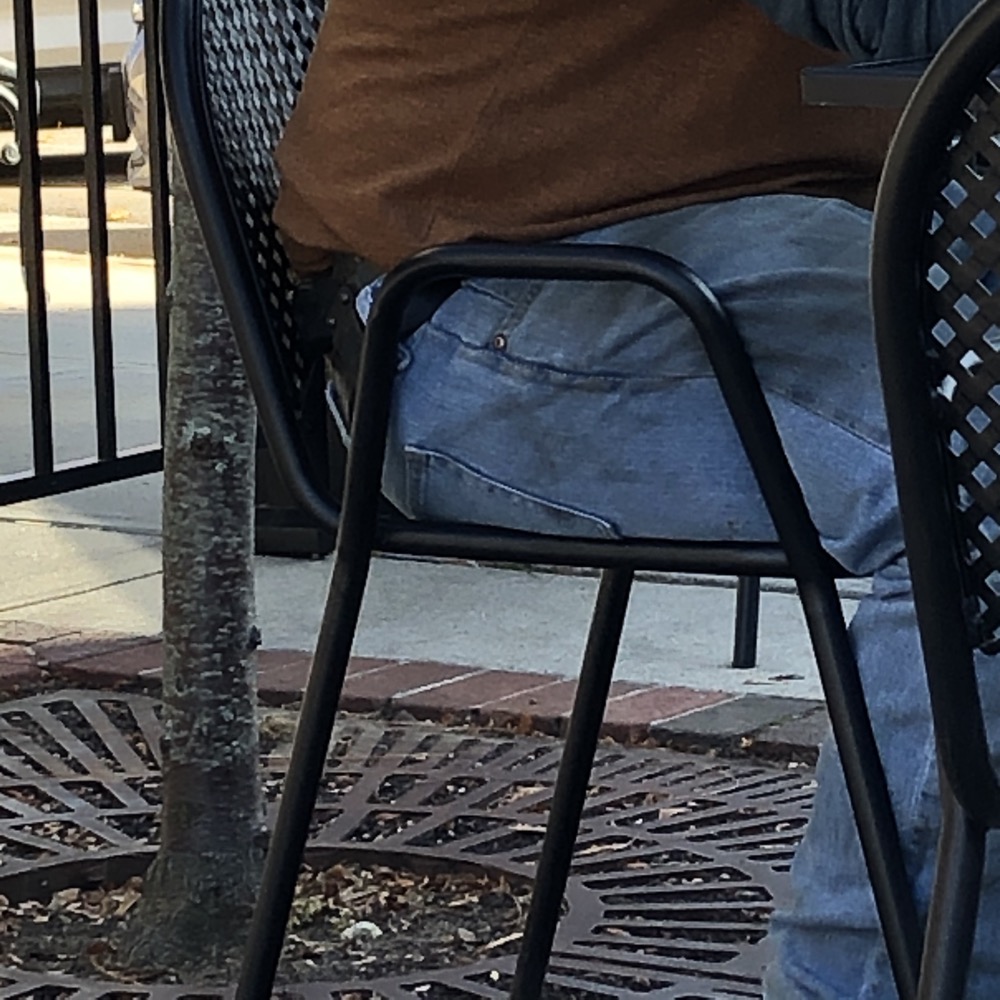 I had a lager too; “Weber Cremations,” which was quite good. Classic Vienna lager that was let to sit long enough to clarify properly and I really liked it. It had more body and flavor from the malt than a, say, Czech or American lager. (The name comes from backyard grilling on a Weber and overcooking a burger to be burnt and I don’t really get that either, but whatever.) Then I had the “Jinger’s Brown.” It was fantastic.

I know, I know… a brown ale. It probably sits in the log for 4 months when tapped. I’m not even a brown ale/porter fanboy at all, but I certainly do enjoy a good one. This is a really, really good one. The best of the bunch I had. 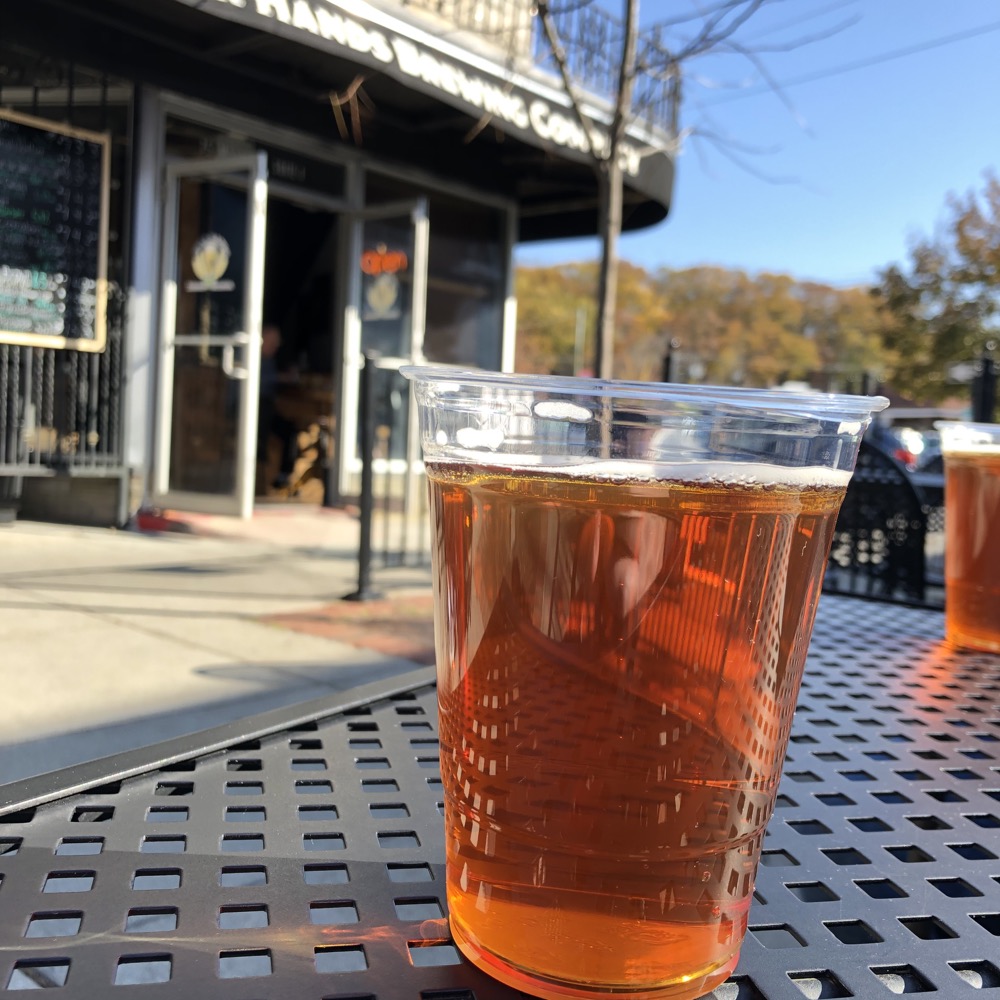 Peeking at what Bear Hands is doing in 2021, I see that they’ve got plenty of the beers and beer-like drinks that so many people are gravitating towards. “Kettle-sours” with mountains of fruit and sugar in them. These are certainly not the types of things brewers like Justin Trant at Bear Hands thought he’d be making and selling when he began Bear Hands just three or four years prior.

But I can’t and won’t front on the brewery for making and selling that stuff. They almost have to these days and more power to them. 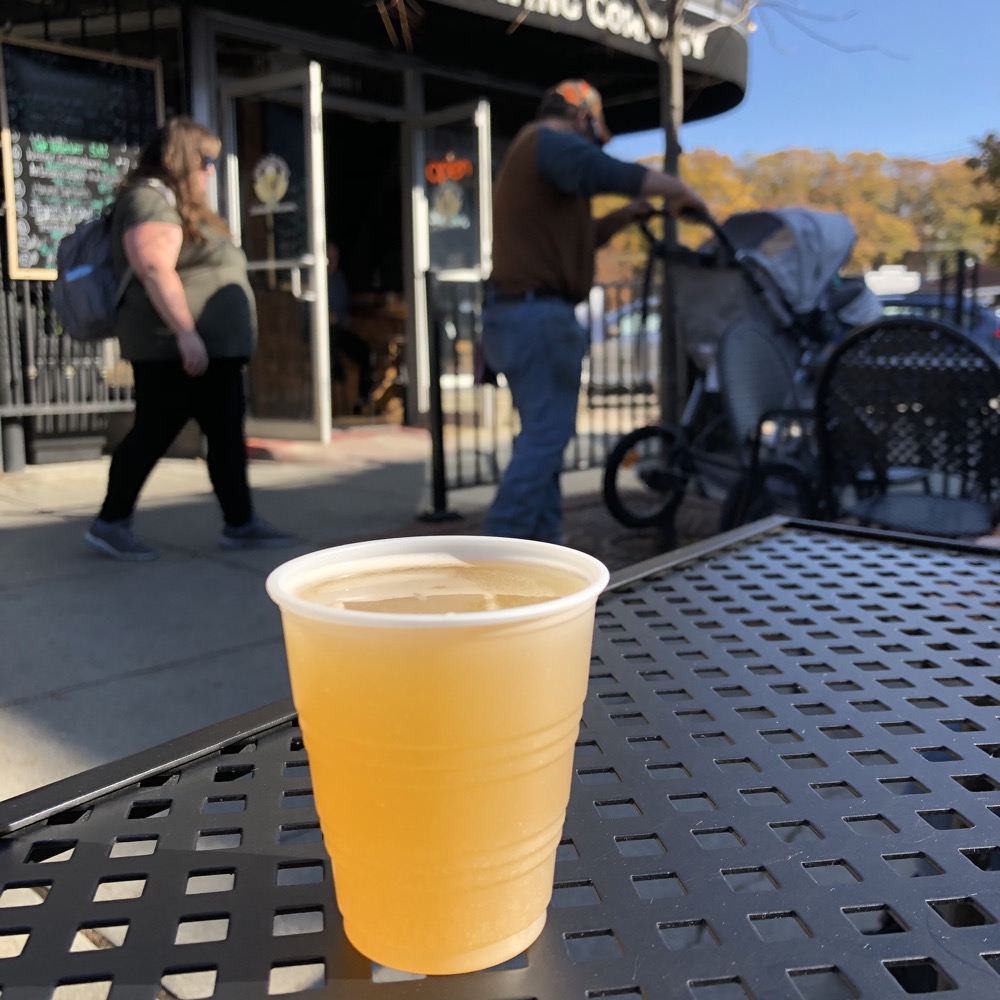 Bear Hands is a great addition to downtown Putnam. It seems like a genuinely good-natured place and provides locals and visitors another good option in town – a town that I really like. It was great to hang out with Rick for an hour in the autumnal sunshine and it was great the guy with the gun on his hip didn’t have his masculinity threatened while I was there.

I’ll enjoy my right to Bear Hands while he enjoys his right to bear arms I guess. Hooray America. 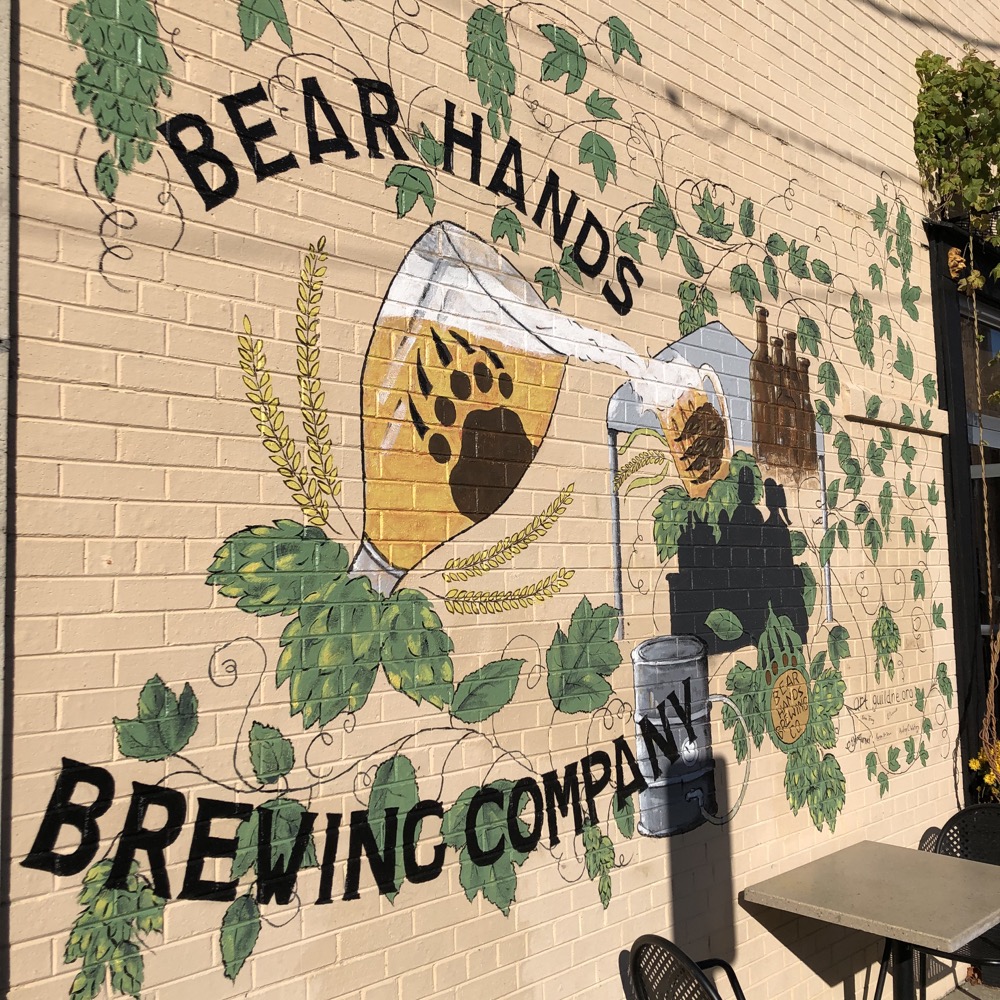