This book is a one-hundred or so page compendium of all the things that first happened, or were invented, in Connecticut. Well, that’s not true, as it would be impossible to create a fully comprehensive list of all of those things. There are just too many, the state’s history goes back too far, and in one sense, the list would be infinite. (For example, I’m the first Stephen Wood from Delaware to raise a family in West Hartford with one child having Smith-Magenis Syndrome.) 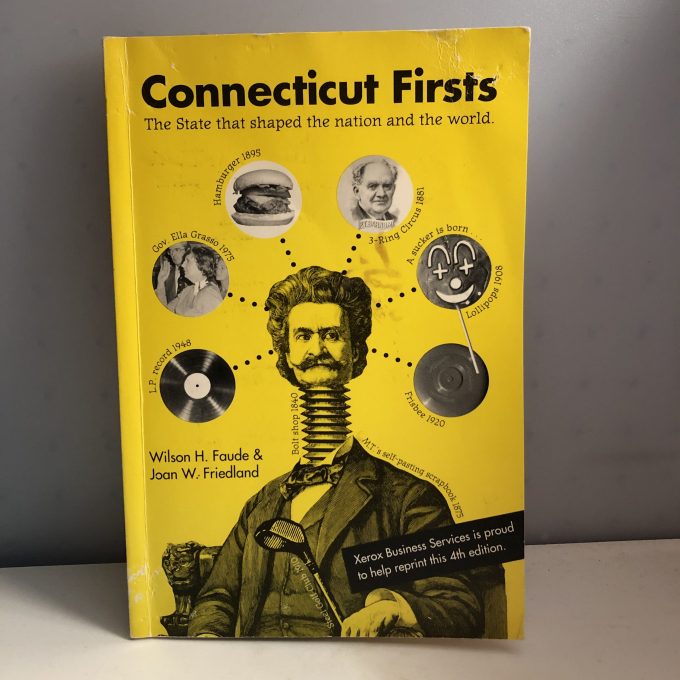 Despite that, Faude and Friedland plunged ahead to write this excellent little book… and Stephen Wood from Delaware also maintains a list of Firsts and Onlies in Connecticut here. For my list, which is ever-growing as I learn of new stuff, I visit and/or experience those firsts and onlies. A good chunk of my list was informed by this book.

I’m fortunate to be able to say that Bill Faude and I became friends before he sadly passed away in 2017. He was a gregarious, humble, and passionate guy. Bill was responsible for a lot of good stuff in Hartford and beyond and certainly deserves props for being an inspiration for CTMQ.

Connecticut, being one of the original 13 colonies, was a hotbed of invention and production for a few centuries. In 1831, Alexis de Tocqueville toured the country and said in a speech, “Connect-de-cot, the little spot that makes the clock peddlar, the schoolmaster, and the senator. The first gives you time. The second tells you what to do with time. The third makes your laws and your civilization. Ah, gentlemen, the little spot you call Connect-de-cot is one very great miracle to me.”

That’s how the book begins, followed by a forward by Homer Babbidge, and then launches into the list. Originally published in 1978 with reprints up through 2000, this list contains a ton of fascinating things… and ton of ridiculous things.

Of course, I pulled out both types to add to my own list. Sometimes, the more absurd, the better for me. But sometimes they just made me mad:

There’s a reason you’ve never heard of Lewis M. Norton: He was run out of town after inventing whatever pineapple cheese is.

Even though the book is merely a large list of bullet points, Faude’s voice can be heard now and again. Take, for example, the “first flight” tidbit:

On August 14, 1901, in Bridgeport, Gustave Whitehead made the first powered airplane flight in history. He flew 50 feet above the ground for a distance of half a mile. Politics, by the Smithsonian has blocked the formal recognition of this “first.” In accepting the Wrights’ plane the institution agreed to block any claims by others of being the first to fly.

Thems fightin’ words. The Whitehead-Wright battle crops up every now and then, but pretty much only in Connecticut as far as I know. I don’t really know the answer, as I’ve heard some pretty good arguments on both sides as to who was first and what defines a “flight,” but I sure know where Faude’s heart was.

Another interesting listing is the “First known murder factory,” which I found to be a darkly hilarious way of describing what Amy Archer-Gilligan of Windsor did at her convalescent home in Windsor. (Which was, of course, to murder a bunch of people.) I’ve “visited” the house and have read and reviewed a book about her pathological crimes called The Devil’s Rooming House, but this was the first time I considered the house a “first.”

The entry right after that? The first US postage meter. Yeah, I’ve visited that too. As you can tell, there’s not much flow to the book.

There are several pages filled with guns and bombs and military submarines and more guns. 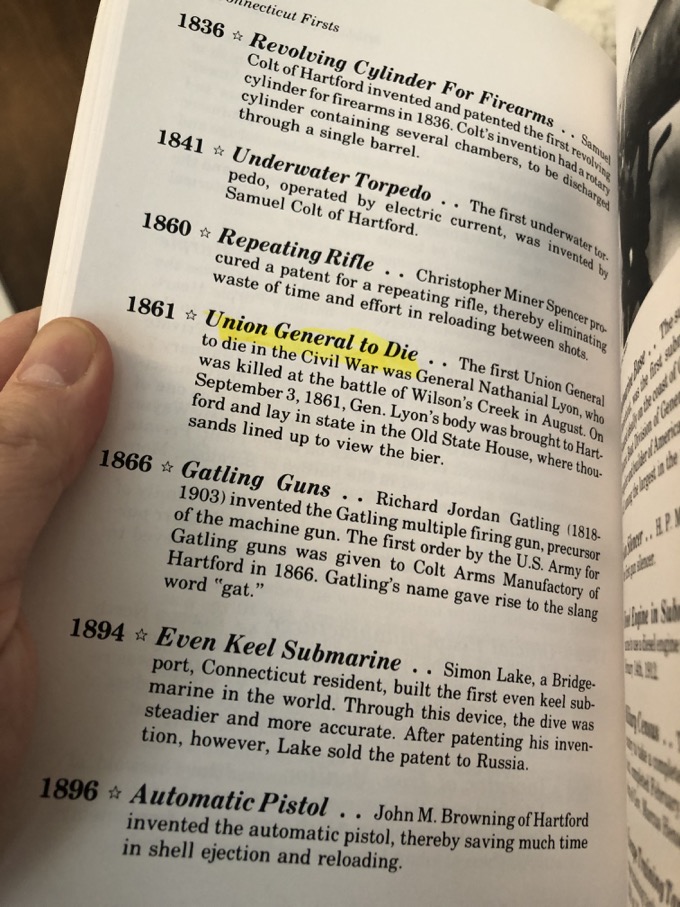 As I think every Connecticut kid learns, our state invented lots of gun stuff. And, as you can see above, we were also home to the first Union General to die in the Civil War! Which, as weird as that is to commemorate in print, is even weirder when you learn that there’s a large monument that says exactly that up in Eastford.

Every sign and monument in our little state dedicated to random firsts brings me joy. Hold on, more guns and bombs and stuff. 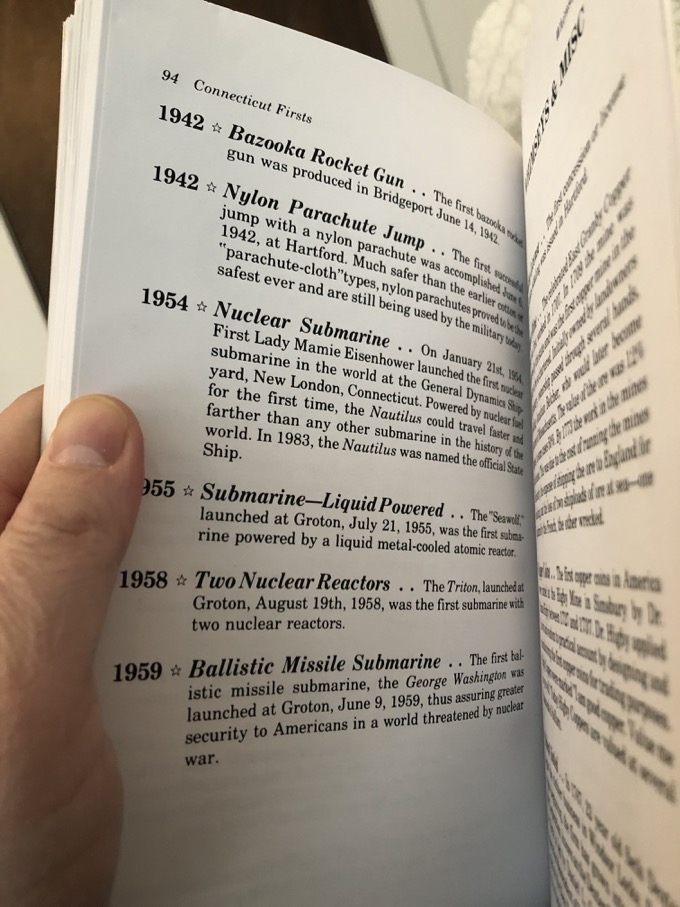 Enough of that. After all, “guns and bombs and stuff” helped make Connecticut one of the wealthiest states in the country for 200 years – and helped us become and independent country that went on to win a bunch of wars through 1945. Let’s get back to more Faude shade… 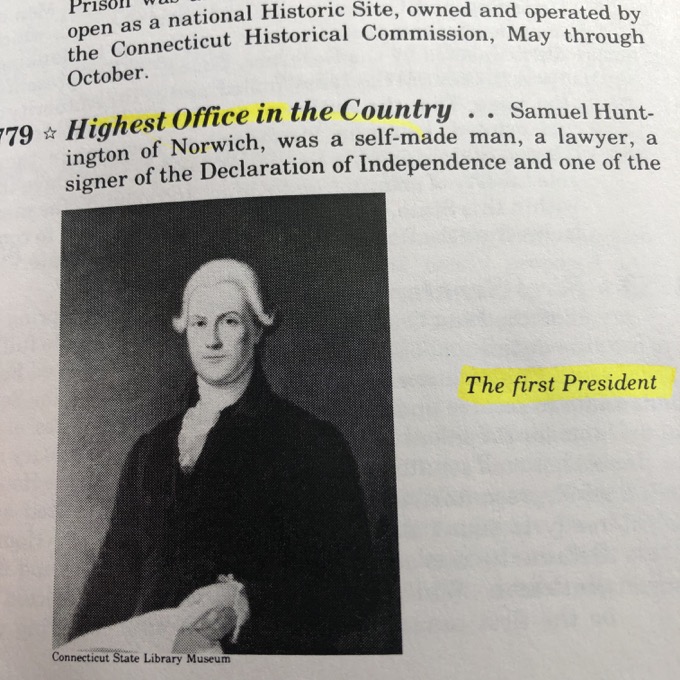 Samuel Huntington of Norwich, was a self-made man, a lawyer, a signer of the Declaration of Independence and one of the most outstanding Revolutionary leaders. From 1779 to 1781 he served as President of the Continental Congress, then the highest office in the country. This makes Huntington the first “President of the United States” as he held the highest office in the country when Cornwallis surrendered at Yorktown and brought the war virtually to the end.

This is, to put it lightly, debatable.

I seem to be pulling out the entries that I feel fall under that category. Like, here’s another one – although I don’t think this one is ever remotely “debatable.” 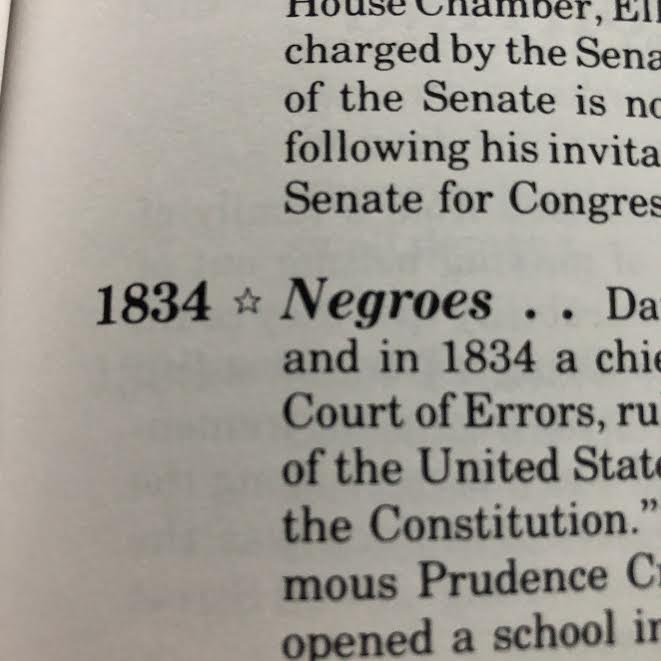 The weird part about that, aside from everything, was that the entry is about the Prudence Crandall House and how the young black children were basically ruled to not be citizens. Yeah, that one had me a bit confused.

Others had me bored, like how Connecticut passed the first approved boiler legislation on July 9, 1864. There are several pages with stuff like that to wade through to get to the good stuff. The weird stuff. The stuff like this: 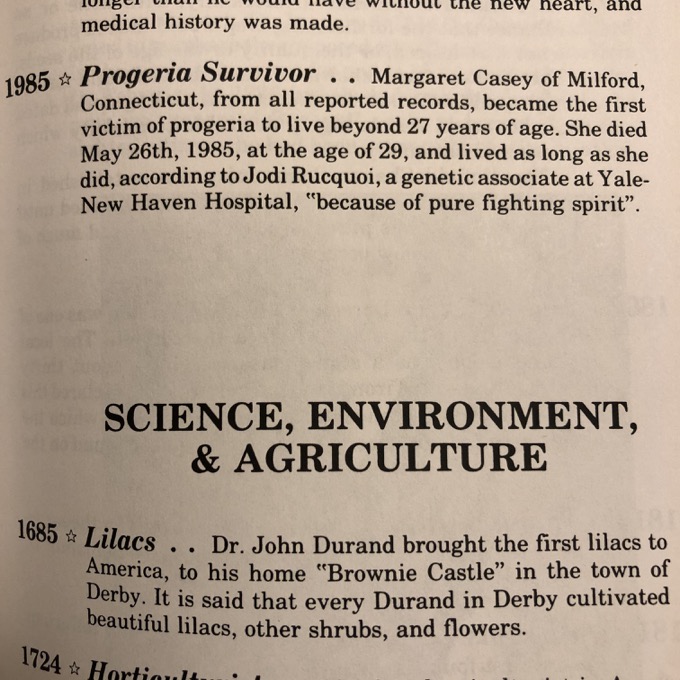 I don’t know why this review is turning into a harsh critique. I love this book. I usually give away every book upon finishing, but I’ll hang on to this one. I’ve actually read through it twice. Once in 2010 or so when I was much more strict about what would end up on CTMQ, and again in 2020 when I had loosened my personal rules. (Not so much that I’m going to go take a picture of a lilac in Derby or a progeria survivor in New Haven, or a “Negro” in Canterbury though.)

I’ll end with my absolute favorite entry in the book. Up at the top of this page I made a dumb joke about how I’m the first person named Stephen Wood who blah blah blah. My man Bill Faude – and I’m sure it was him and not his co-author – actually put an entry in his own book to that effect:

Awesome. RIP Bill, you are missed.