Bucked at Buckland… But Saved Two Bucks
The Carousel at The Shoppes at Buckland Hills, Manchester
February 19, 2017 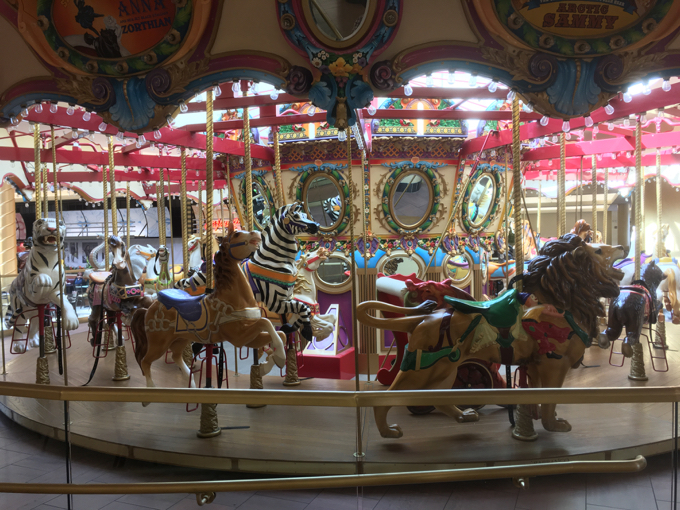 Shame on Buckland Hills Mall. The boys and I arrived around 11:45 on a Sunday. We ate some horrific slices of “pizza” from Sbarro, just killing time until the carousel was to open at noon.

For those of you unaware (that is, every single last one of you), Connecticut had/has a Carousel Trail. I have an old brochure somewhere listing out 13 historic carousels around the state. So that Trail was added to CTMQ for completion. 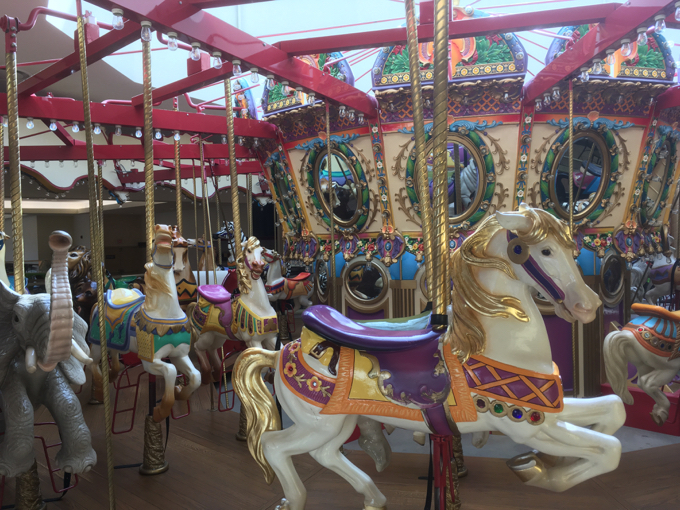 Everyone is familiar with the Bushnell Park Carousel and probably the one at Lake Compounce. We also have a Carousel Museum in Bristol. But beyond that, I found the Trail a pretty cool way to check out some of the lesser-knowns. A couple have closed (Mystic, Waterbury), but most are still open.

However, I can’t find anything online about the Trail that was once promoted as a “thing” maybe ten years ago. 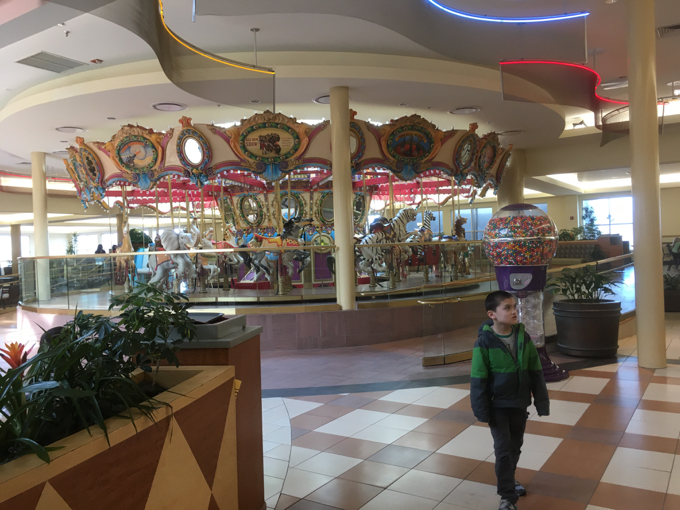 As we waited for the carousel operator to arrive, I went to go get tokens to ride it. It apparently costs two bucks per ride. The first token machine had an out of order sign on it, so I simply went to the other token machine.

There was no sign, but the frustrated mother’s inability to get any tokens was all the sign I needed. Both machines were broken. 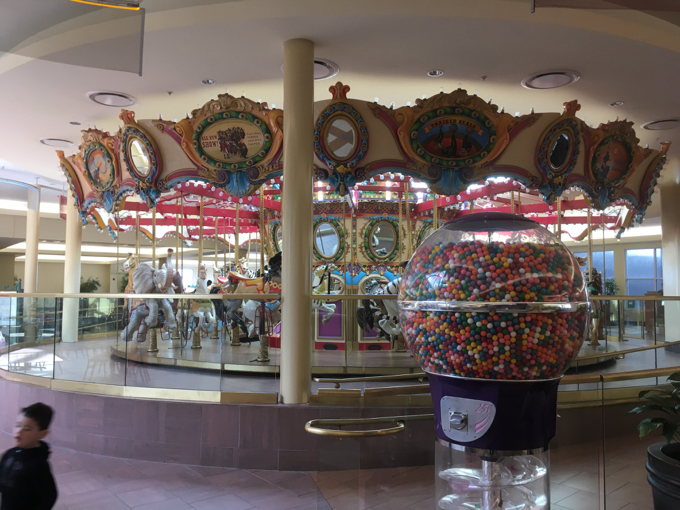 I figured, “no big deal,” the carousel operator will realize that none of the now-15 or so families waiting for his or her arrival were able to get the stupid tokens and we’d somehow be allowed to ride.

It was now 12:15 and several impatient young children were breaching the chain and exploring the carousel on their own. 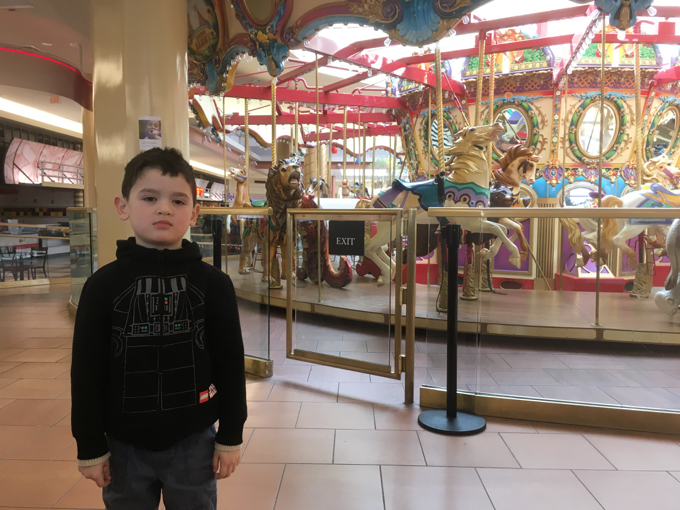 Other kids were crying.

One little kid hopped on a horse and pretended it was moving.

After waiting over 20 minutes and having zero confidence the situation would be remedied, we left. 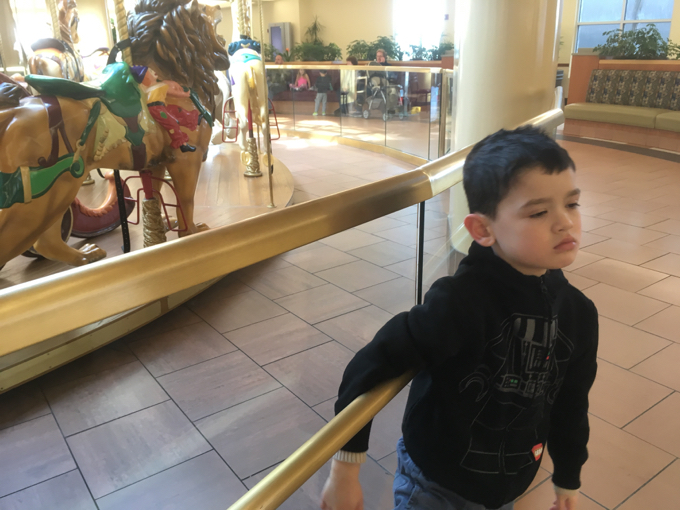 I was able to find this, from a woman who was lucky enough to be there on a day that things were actually working:

The Barrango Carousel was designed by Barrango in San Francisco, CA in 2003. It is 38 feet in diameter and sits 3 riders beside each other. It is made out of fiberglass and has a circus theme with elephants, lions, camel, a white tiger and multiple horses. The canopy has numerous lights and hand painted murals of circus animals and special acts on it while the inside column has additional lights, mirrors, and vibrantly and elaborately colored panels. 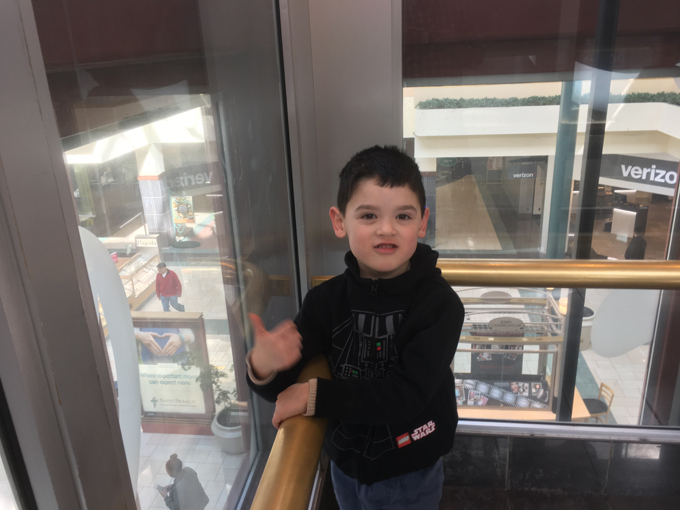 And just to top off our exciting trip to the mall which, again, consisted of gross Sbarro, broken tokens, and a carousel we couldn’t ride, Calvin delighted in the escalator.

So our visit wasn’t a total bust. 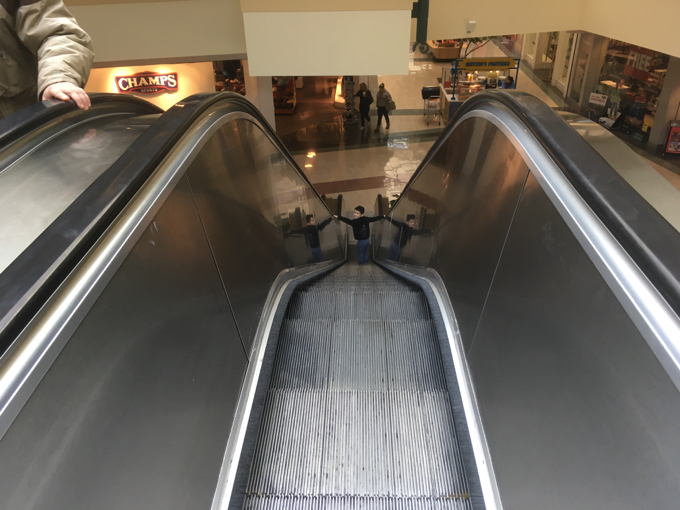