This Thing Has Been Around
Bushnell Park Carousel, Hartford
May 11, 2008

The Bushnell Park Carousel is one of those things that everyone from these parts knows about but probably has not really actually experienced. Oh sure, everyone knows where it is and has walked by it – but it’s just not something I would ever have done if not for my website. And to think it only costs a dollar! And lifting one of their pictures from facebook is free! 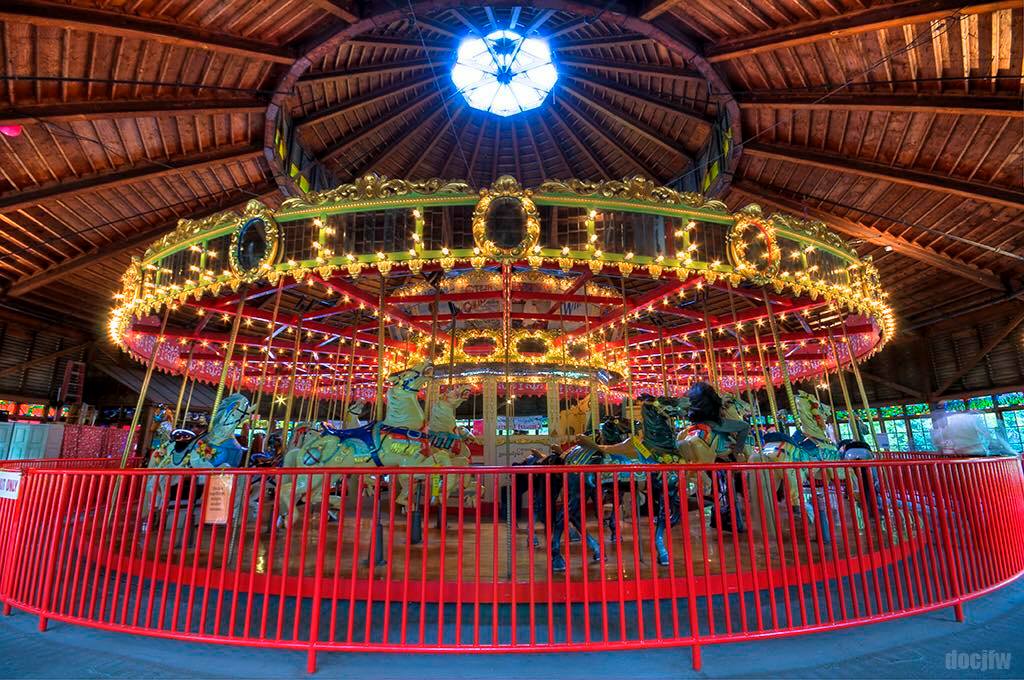 Mother’s Day is one of those days when it seems families should do some family things. To show our appreciation for mom, Damian and I took Hoang to the carousel. Mind you, this isn’t just any ol’ carousel – there are only three Stein and Goldstein carousels left operating in this country… and this is one of them. Not only that, but the tails are REAL horse tails! See: 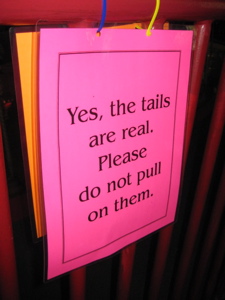 Fittingly, the Bushnell Park Carousel is situated in the handsome Bushnell Park in Hartford. Bushnell Park is not just a place for skeevy dudes to meet other skeevy dudes late at night for skeevy activities, it has quite a history of its own. It was the first municipal park in the nation to be conceived, built and paid for by citizens through a popular vote. The story behind this is interesting – interesting enough to warrant its own CTMQ page. And since I’m linking things, it bears mentioning that the park was designed by Jacob Weidenmann, a close personal friend of Hartford native and Central Park designer Frederick Law Olmstead – whom we’ve discussed in various other places here on CTMQ.

(Central Park is the home of a four row Stein and Goldstein carousel – the third is in Knoebel’s Groves Amusement Park in Pennsylvania.) 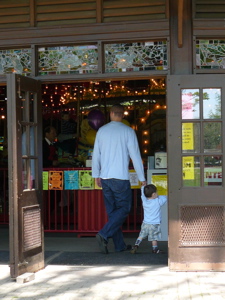 Weidenmann is important to us because, among (lots of) other things, he also designed Cedar Hill Cemetery and the gardens at the Butler-McCook House Museum). In short, Bushnell Park is really pretty and nice to have in the center of downtown Hartford. Of course, the State Capitol Building sits atop a hill here as well.

So Damian, where is the carousel? 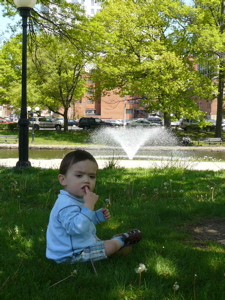 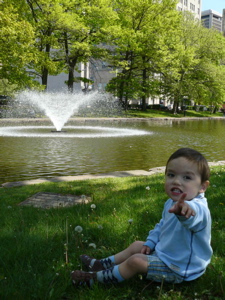 Yes sir, it is. As I mentioned, it was only a dollar to ride the historic ride – and Damian was totally jazzed up. This wasn’t his first carousel ride. One of Damian’s finest appearances occurred here, at America’s Oldest Amusement Park, Lake Compounce. 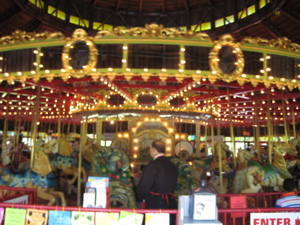 We paid our three dollars and picked the raddest chariot available. The Bushnell Park website describes the initial rush upon entering better than I ever could…

It’s a sweet surprise to find a vintage 1914 carousel standing in Bushnell Park. There, by the shadow of office buildings and a giant Turkey Oak, a 24-sided pavilion houses 48 hand-carved wooden horses and two lovers’ chariots that swirl around a booming Wurlitzer band organ commanding an optimism that contrasts with the city’s often-troubled image. 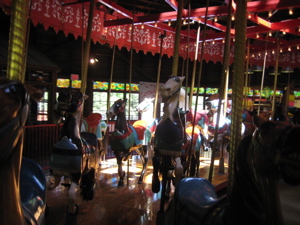 Eh, what the heck. That was so good, I’ll reprint some more:

The Knox Foundation brought the carousel to Hartford from Canton, Ohio, in 1974. Jack Dollard, director of the Foundation at the time, and now an architect in the city, thought the horses would symbolize Hartford’s restoration.

Then Tracey Cameron, a Hartford resident, spent more than a year restoring the horses to reflect the same fury that Russian immigrants Solomon Stein and Harry Goldstein first carved into their faces in 1914. Mass production and changing tastes led to the demise of hand carving and now collectors, buying up single horses, have dismantled hundreds of carousels. As a result, this carousel is only one of three Stein and Goldstein carousels left in existence. 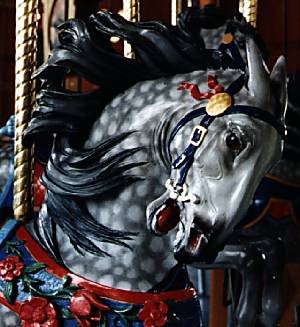 They, like many carousel craftsmen, started in Russia as carvers of women’s combs. They came to the United States in the late 1800s to carve carousel horses for Coney Island, which, at the height of the craze, had some two-dozen carousels operating. Stein and Goldstein horses are distinguished by their flamboyance, their big teeth, bulging eyes, by the huge and colorful cabbage roses which festoon their bodies and their real horse hair tails.

Eventually, they built a reputation as “artistic carousel manufacturers” and they built carousels when there were at least 3,000 in the United States, when riders on the outside row dipped their index fingers for brass rings and a ride was considered a dare because 15 mph was faster than anything. The invention of the roller coaster gave carousels a more romantic reputation–and fewer riders. 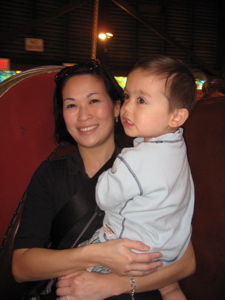 Good stuff. The carousel is actually officially part of the New England Carousel Museum, which is over in Bristol. Instead of transcribing a bunch of the signage I jotted down or the brochures I took, I’ll crib some more from their website, on the history of carousels in the US:

There is a permanent display inside of the enclosed pavilion that shelters the ride. Colorful panels providing interesting facts and information about the history of carousels in the U.S. are mounted on the walls for the pleasure of adults and children. Also featured every day are three-dimensional decorative pieces of carving styles to illustrate how different manufacturers created their own signature look and character. For example, the Bushnell Park Carousel horses, chariots and decorative trim are of the Coney Island style, with a magnificent and glitzy sort of design. In contrast, the Philadelphia-style carousel is very different with a much more realistic look. The horses of the Country Fair Style of design are usually smaller and less detailed than the others. Inside the pavilion, people can view examples of the different styles of trim pieces decorating the perimeter of the pavilion. 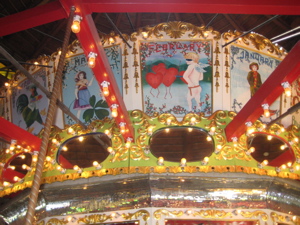 I found two facts above very interesting – that this thing has only been here for 33 years and that carousel carvers often started out as ladies comb carvers. In Russia. Who knew? As for the ride itself, it was… a carousel ride. The horsies went round and round and up and down and the organ boomed tinny music and the lights flashed all around. In a word; fun. In fact, at the end of the three and a half minutes, Damian signed for more! 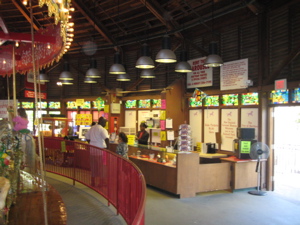 Speaking of “more,” the New England Carousel Museum has developed the “Magnificent Carousels of Connecticut Trail.” With markers and maps to our state’s various carousels, one can spend an entire day seeking these things out. In addition to this and the Compounce one, there are two other historic carousels – one at Lighthouse Point Park in New Haven and the other at Sound View Beach in Old Lyme.

Oh, there are more – a privately owned one in Danbury and four resin reproductions as well (Quassy Amusement Park, Mystic Fun Center, Danbury Fair Mall and the Beardsley Zoo in Bridgeport. There are newer cheesier ones elsewhere as well, but we’re purists here.

At the Bushnell, tours and bookings for parties are available if interested. 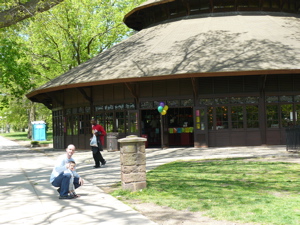