Oh Canton, you keep pulling me back. You alluring, alluring town, you.

What I mean is… I’m on top of Canton. All over it. She is my muse. I think it’s fair to say that on CTMQ, I sort of obsess over certain towns – namely, those that I’ve “completed” that keep showing me that I’ll never actually truly “complete” them. I keep telling myself to leave Canton alone for a while. Let it go. Move on. Get over her. 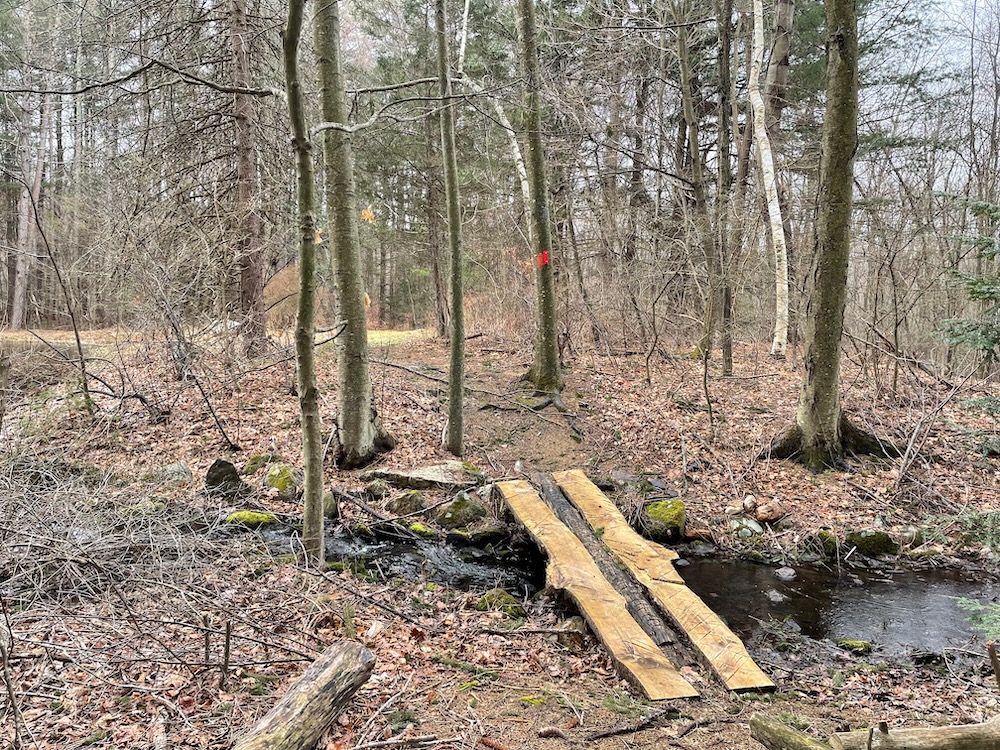 And yet, owing to its proximity to my West Hartford home and its propensity to add a new trail or winery or whatever every time I think I’m through with her, Canton reappears on my radar.

The Carpenter Trail, way up north near the Barkhamsted border off of Case Road, is not a new trail at all. In fact, it was cleared and blazed in 2012 by a couple prospective Eagle Scouts. It is located on land owned and managed by the town, and doesn’t seem to appear in an Canton hiking guides that I’ve found. 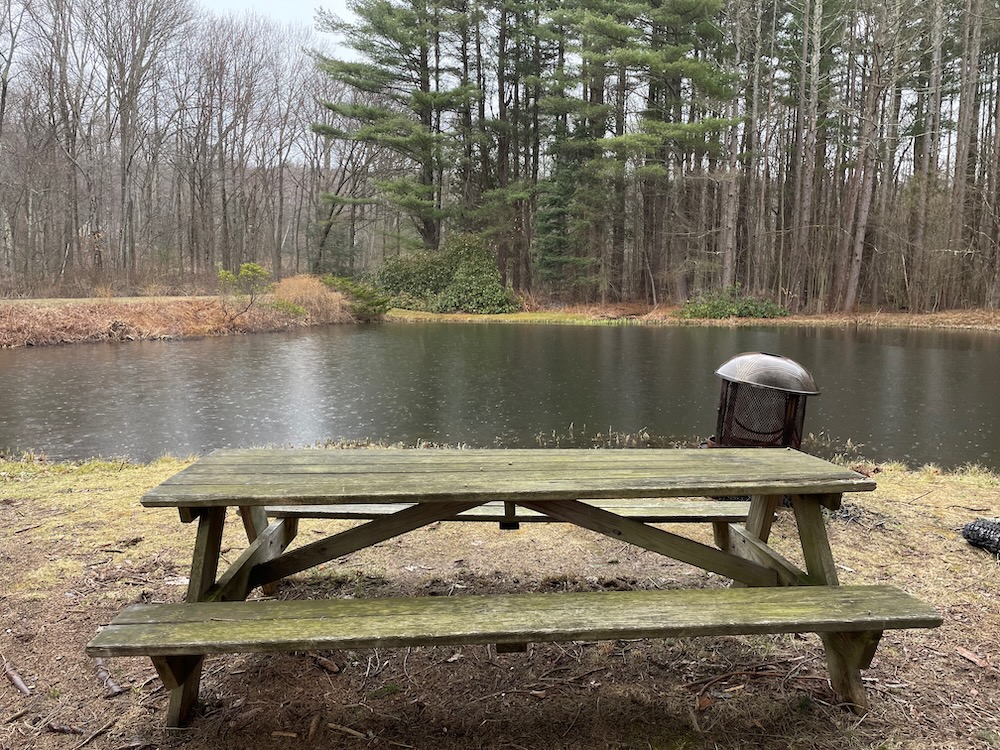 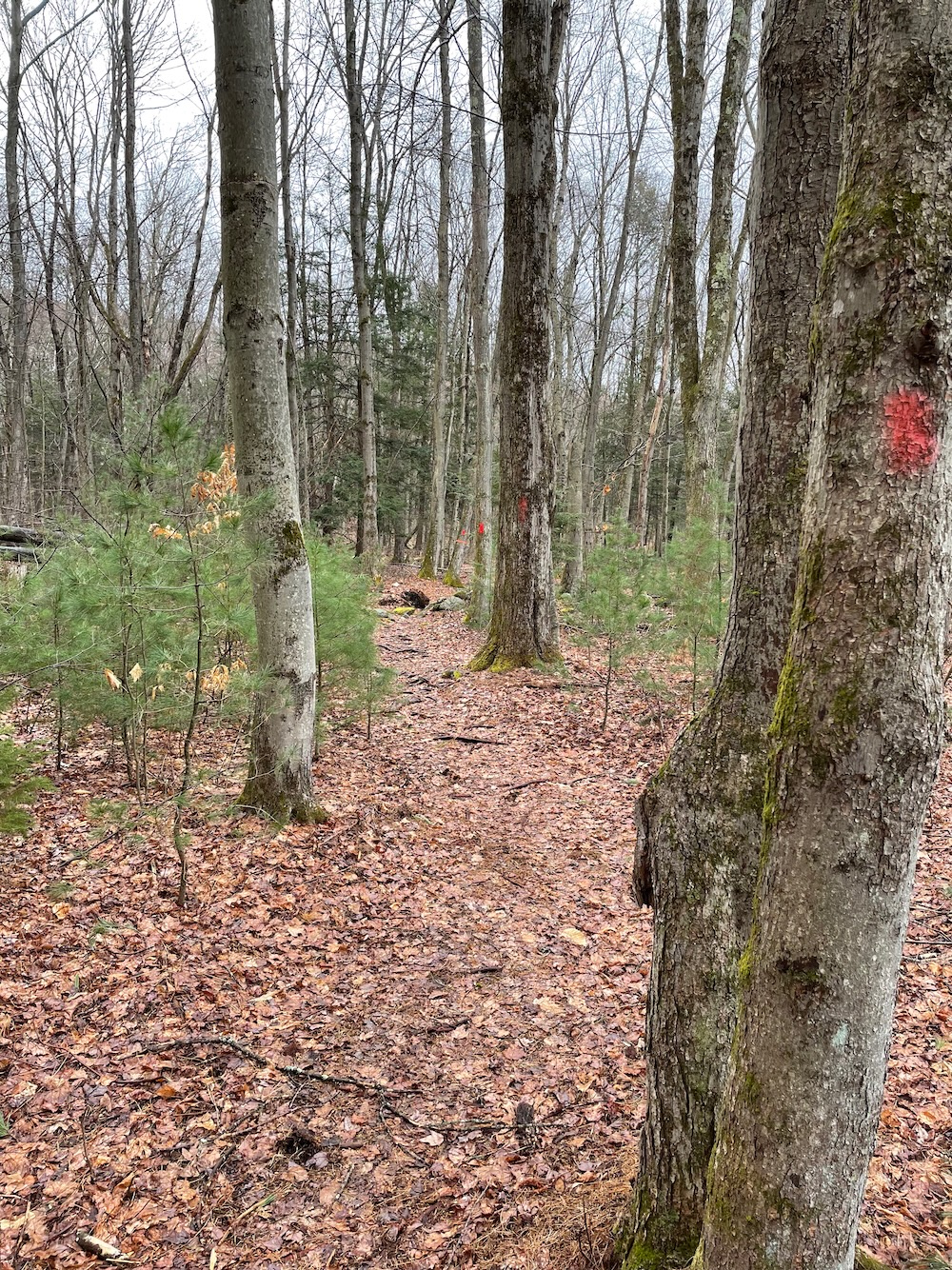 I’d learned of its existence from a reader and friend who likes to point out trails that I’ve overlooked. I’m still not sure whether I should thank him or slap him every time. (Thanks, Rich!)

He’d tried to hike the property in early 2021 and reported that it was an impossible slog. But it was a blazed trail – or was at some point in the past. 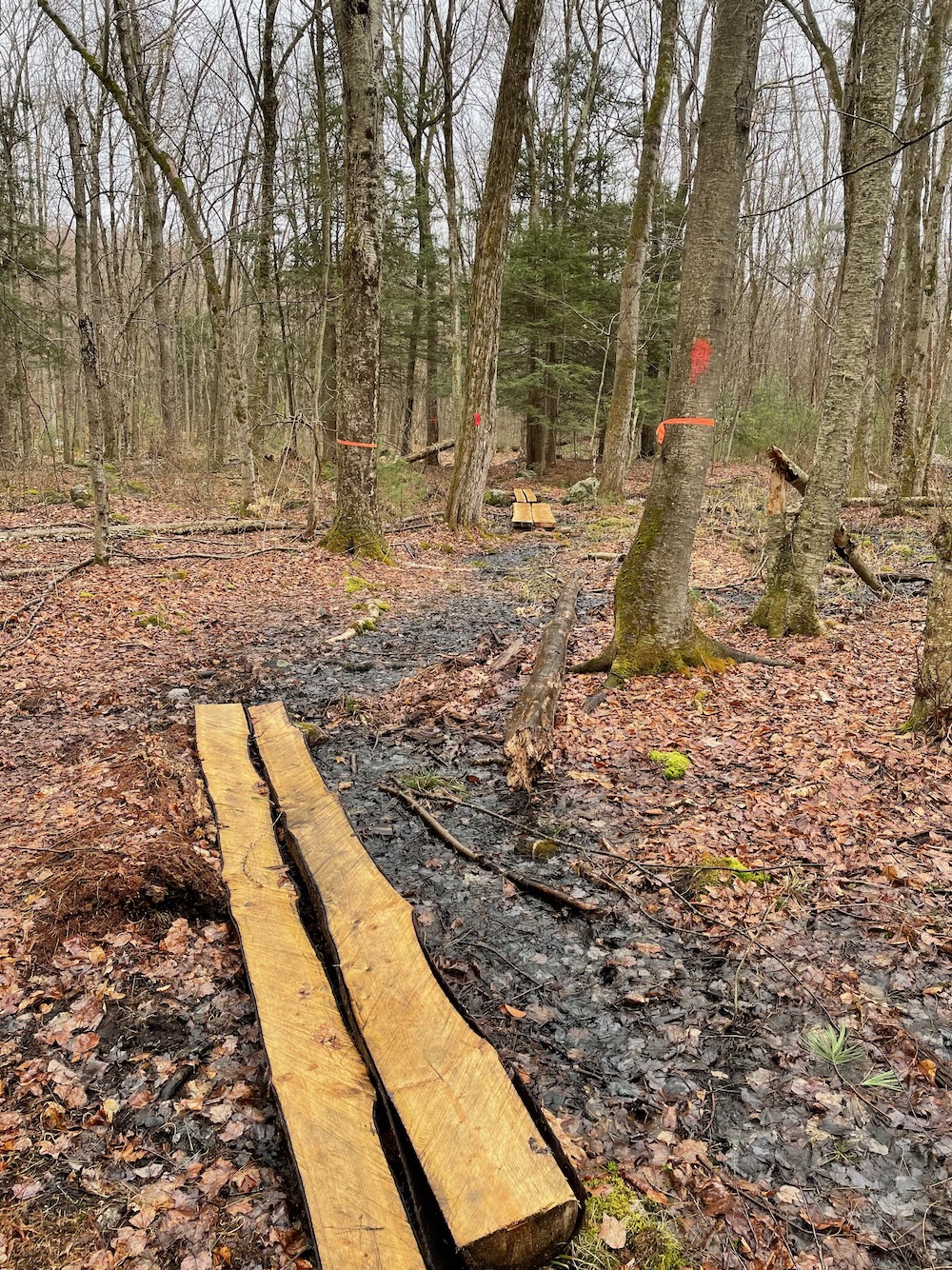 However, at some point in 2021 the ever-active Canton Land Conservation Trust agreed to manage the trail and they went all in. Clearing, re-blazing, and re-routing a portion of the trail. I had no idea that this had happened as I set off from the fairly well-kept parking area just south of Brookridge Road.

I should mention that I was dressed in a hoodie and jeans – not ideal hiking gear, but the total out and back is less than two miles, so I wasn’t concerned. However, it was raining pretty steadily as I drove to the trailhead and cotton sweatshirts and jeans are rather terrible in a cold, steady rain. 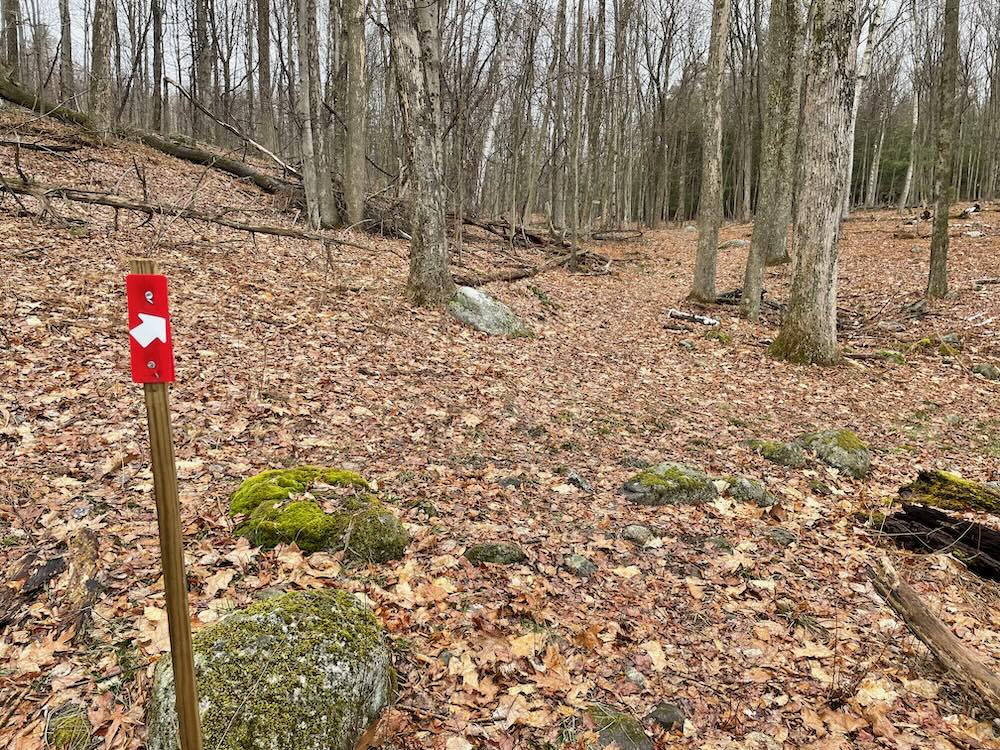 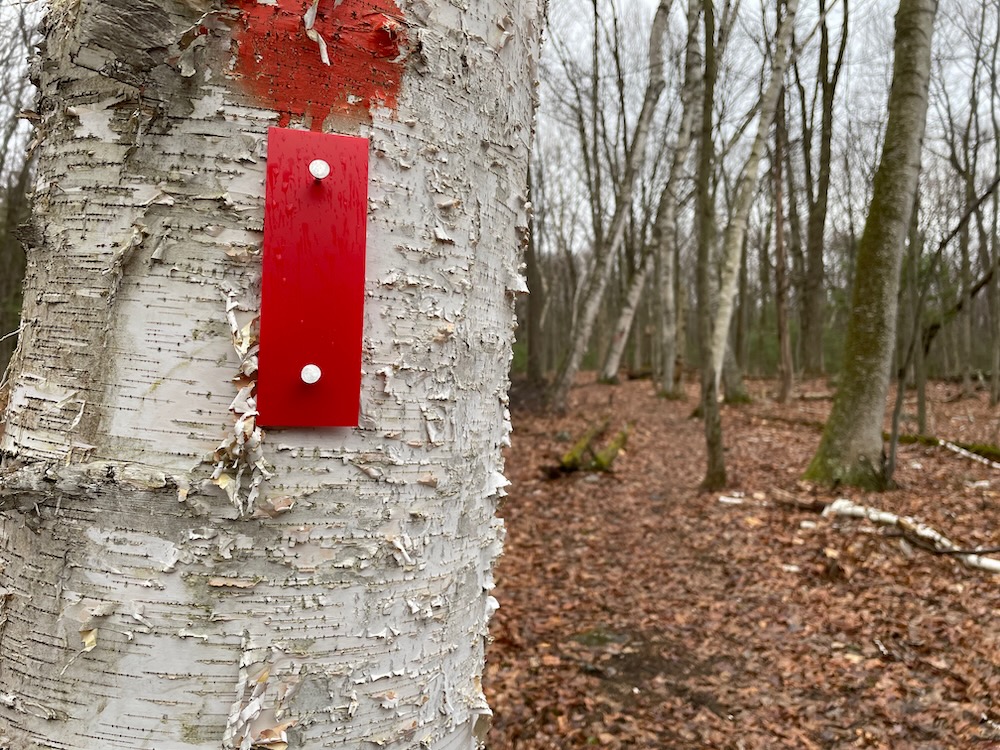 “Two miles,” I told myself. And I was going straight home afterwards, so I figured I’d survive. Three minutes down the trail the rain stopped. It didn’t start again until about a minute after I arrived back at my car. Canton is truly a magical place.

Less than three minutes down the trail I knew that the CLCT had been here. Their signature nailed-on red blazes marked the trail and, much to my surprise, the trail was very nicely cleared. There are several boggy areas and some newly hewn log puncheons had been strategically placed. Folks, we have another legit trail in Canton. And it is blazed. You will not lose the trail here. 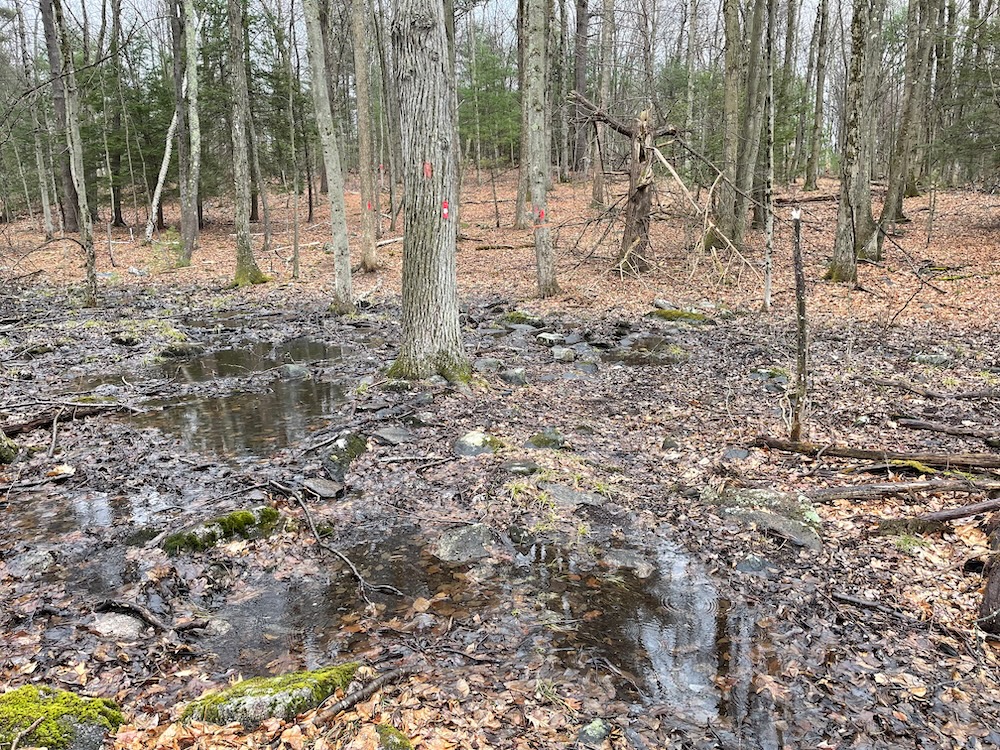 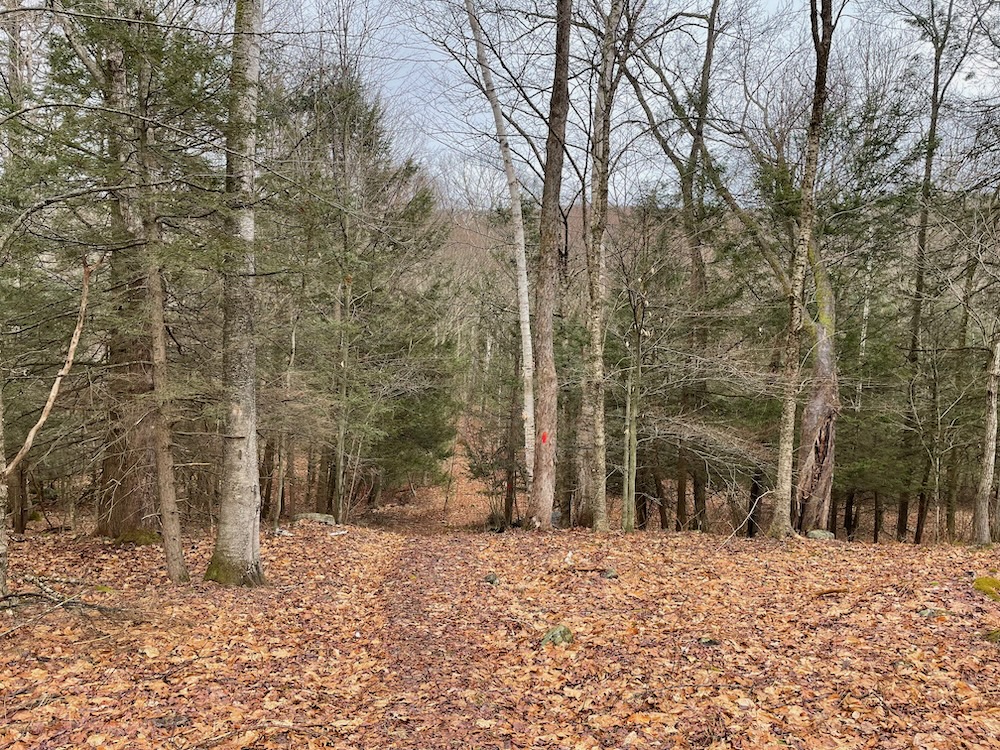 There are some mild ups and downs and a somewhat dicey marsh crossing before a short turn on an old woods road. Here, the trail descended steeply to a nice stream that feeds Cherry Brook. So many CLCT trails feature Cherry Brook… I guess they “let” the town have the parcels that only have feeder streams.

Across the stream and up the hill on the other side and into a laurel grove where the trail makes a small loop around the top of the little hill. I found this kind of funny; like, instead of a pure out-and-back affair, someone decided it would psychologically work better if it ended with a loop. 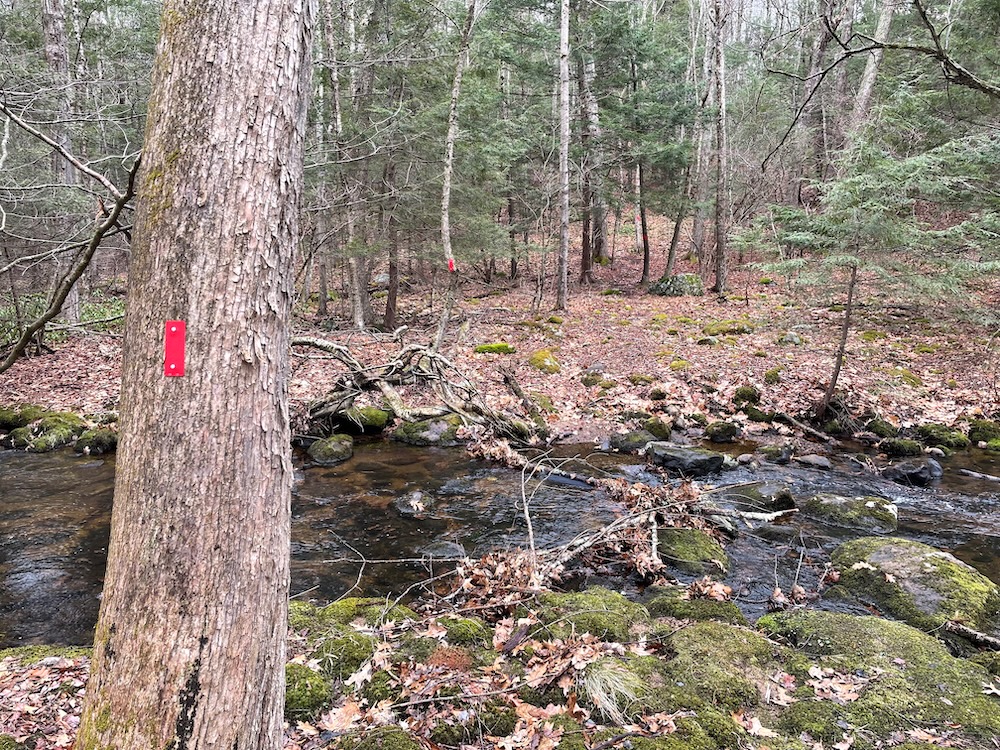 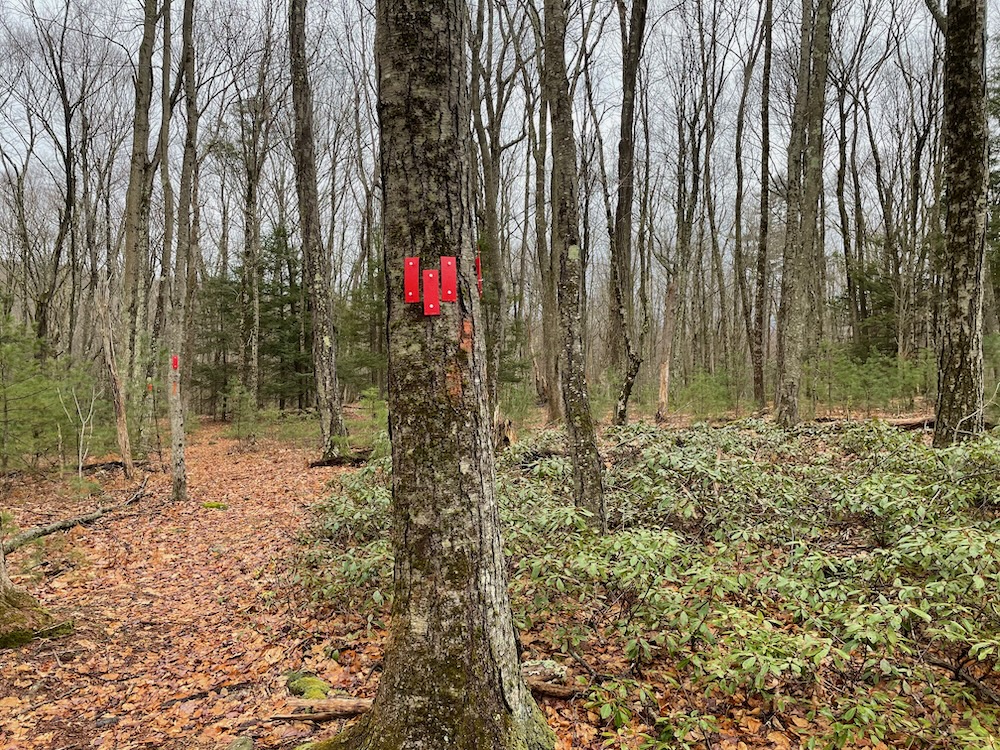 In winter, I could see the entire loop from where it split. In the future, when this laurel grows up, it will probably be a pretty cool little loop. After that, it was back to the trailhead… down, up, and over the water features.

Not the best trail in Canton, but worth checking out. And if it’s not your cup of tea, I’m sure another “new” trail will appear around here somewhere someday soon. I’ll be here for it. 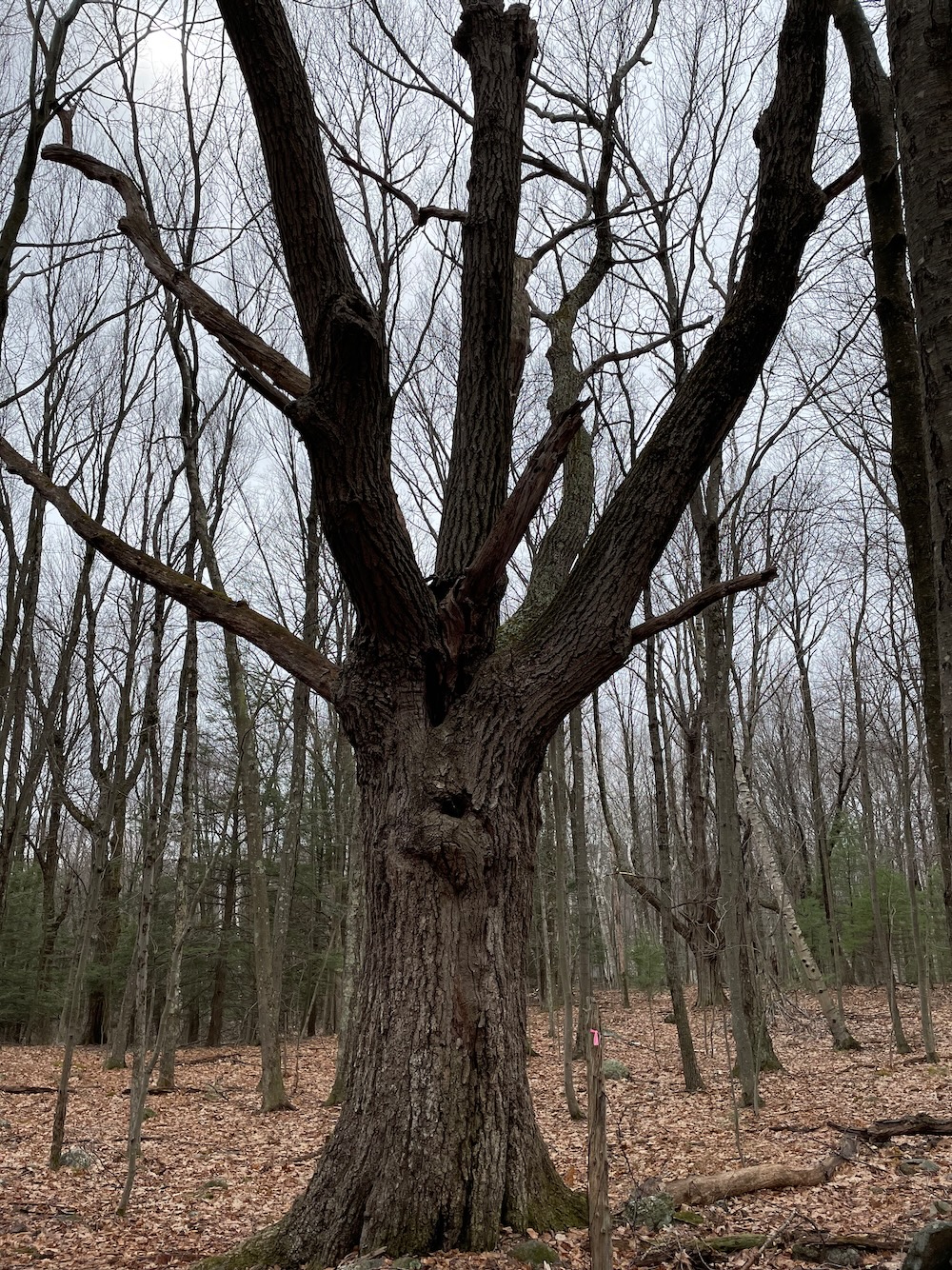 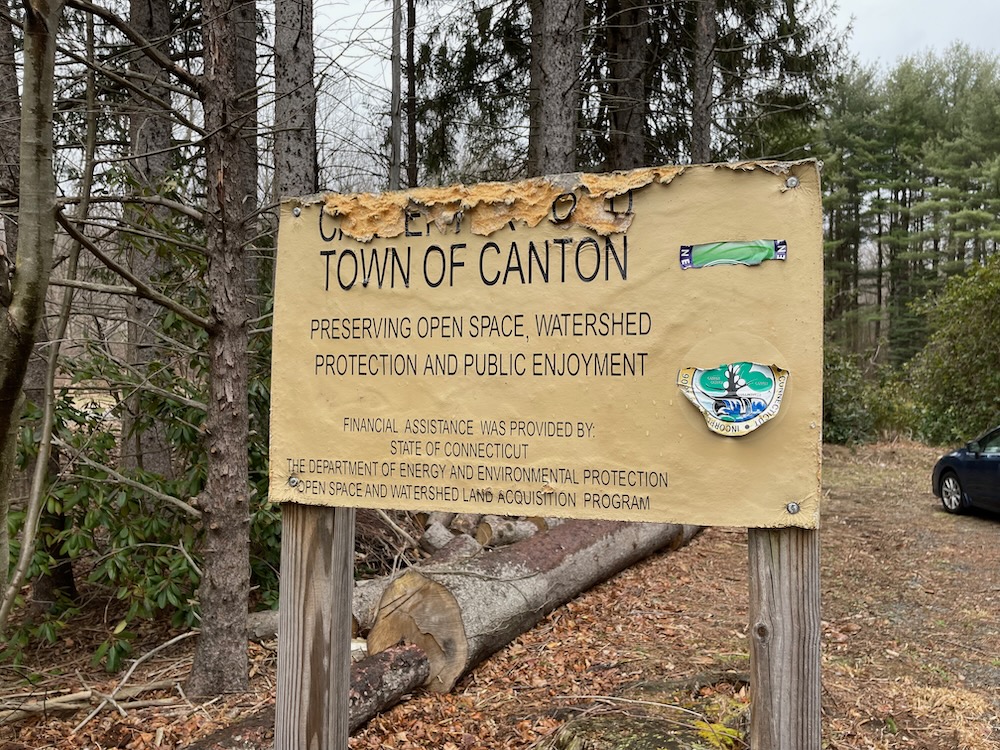