At some point someone dubbed Great Falls – also known as Canaan Falls – “The Niagara Falls of New England.” In 2015 or so, the go-to New England waterfall resource first said, “If you are unable to make it to Niagara Falls in New York this summer, this waterfall might be just about as close as you can get to that in New England.” 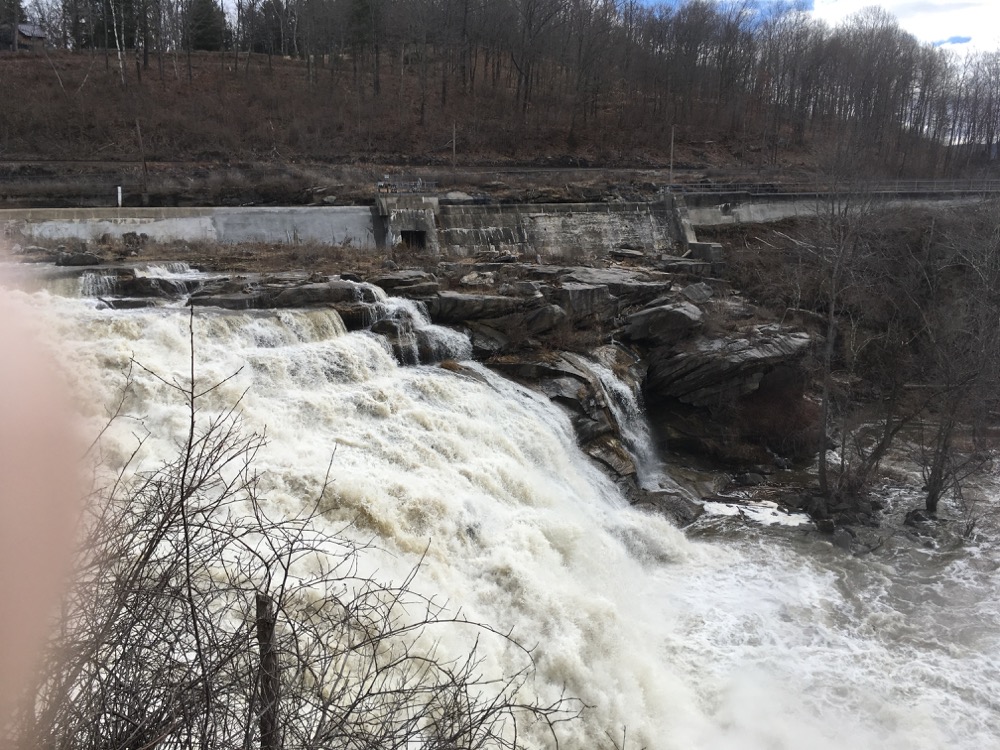 Then in 2017, the go-to Connecticut outdoors resource Peter Marteka in the Hartford Courant wrote an article about the falls stating,

Great Falls is known as the Niagara Falls of New England — at least temporarily.

No, there isn’t a trio of waterfalls and there are no laser lightshows or honeymoon suites available here. It mostly resembles the American Falls, but don’t make plans to go to Great Falls during just anytime of the year. 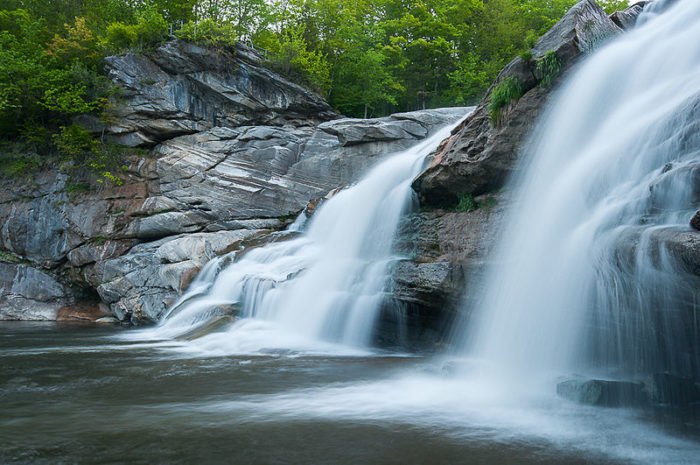 So when the Worst Website in the World did their terrible page on the falls, they titled it, “Connecticut’s Niagara Falls Is Too Beautiful For Words.” Well, that’s weird because the plagiarizer who “writes” that garbage had literally just copied and pasted a bunch of words about the falls before stealing all the pictures they used for their page.

Great Falls is beautiful, sure, but I’m having no trouble writing words to describe it. It is a stretch to compare it to Niagara Falls though. Even after a monsoon at the right time during the right conditions. Sorry. 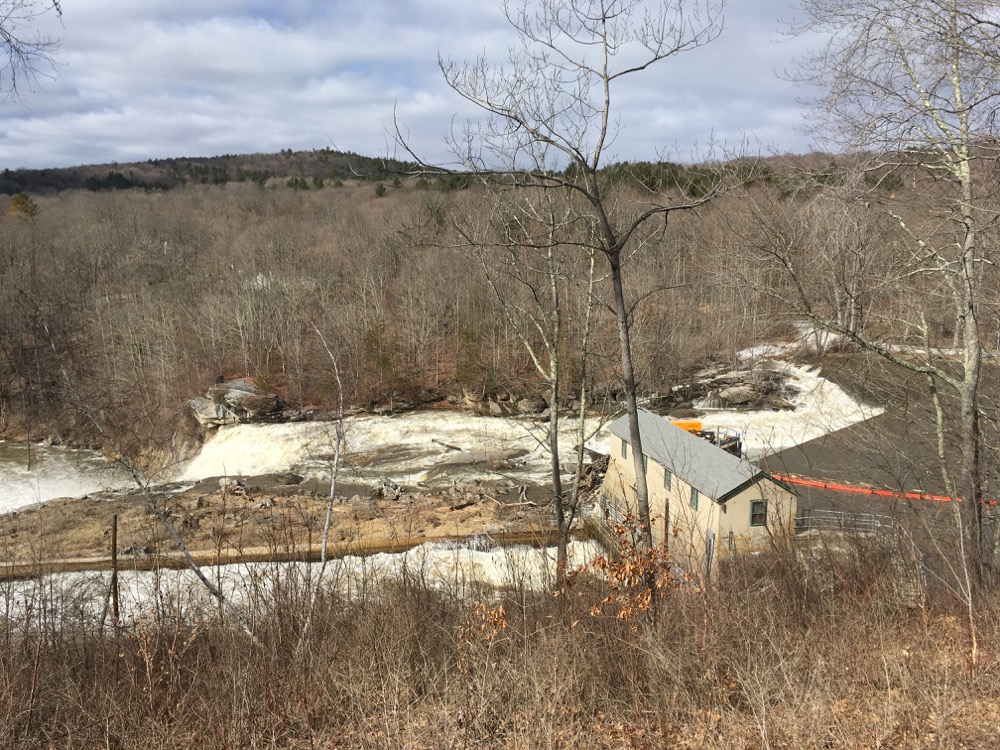 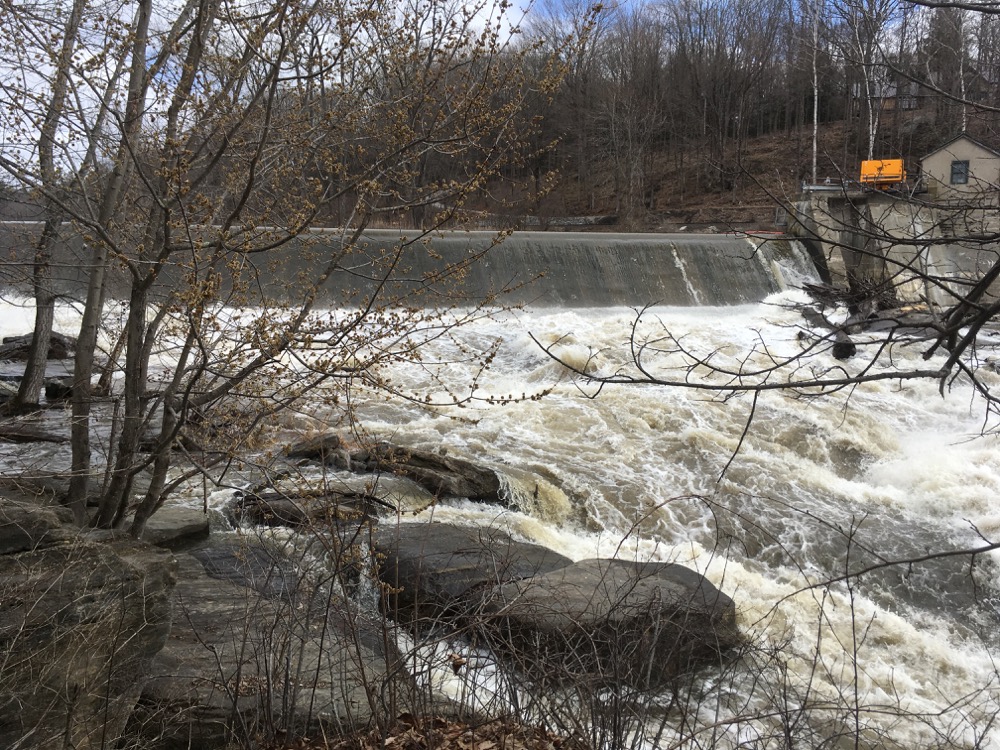 Essentially, those “right conditions” are when the Housatonic is flowing heavily from snow melt or storms and the hydroelectric plant at the falls can’t handle the volume. When that happens, the river rushes over the 50-foot drop in an impressive display. The boys and I visited when there was a pretty decent flow.

The Housatonic is a heavily dammed river and power generation plants line it along its entire length. Many of these hydroelectric stations date back well over a century, including the one here. There’s a concrete dam that diverts the river into a long canal that flows into the turbines which generate a ton of power for the region. 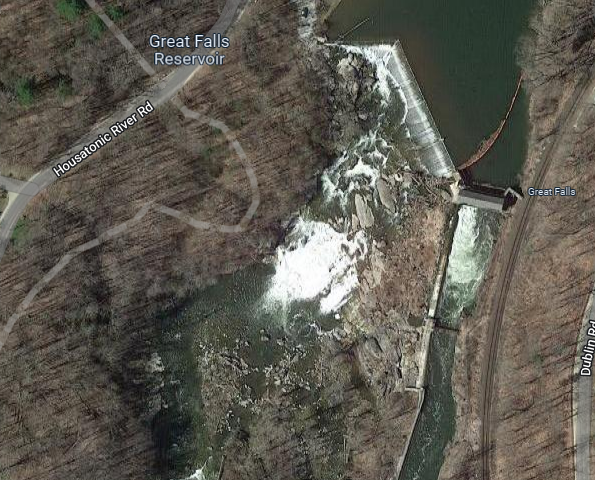 Here you can see the Appalachian Trail at left, the dam, the falls, and the canal

There are a couple parking areas and access trails. I took the boys down the Appalachian Trail which curls off the road to take in Great Falls. (This little spur on the trail comes at the end of a series long northward road walks and is sort of like a chapter heading before whisking hikers northwest into the Litchfield Hills. In fact, there’s not another long road walk until Dalton, Massachusetts heading north.

The boys were impressed with the sheer power of the water. It is loud for one thing, and the three of us could barely hear each other over the crashing water on the boulders in the ravine. Great Falls is definitely the most powerful falls in Connecticut – when its humming. During the summer when the Housatonic is low, almost all the water is diverted for power and the Great Falls become a Great Trickle. 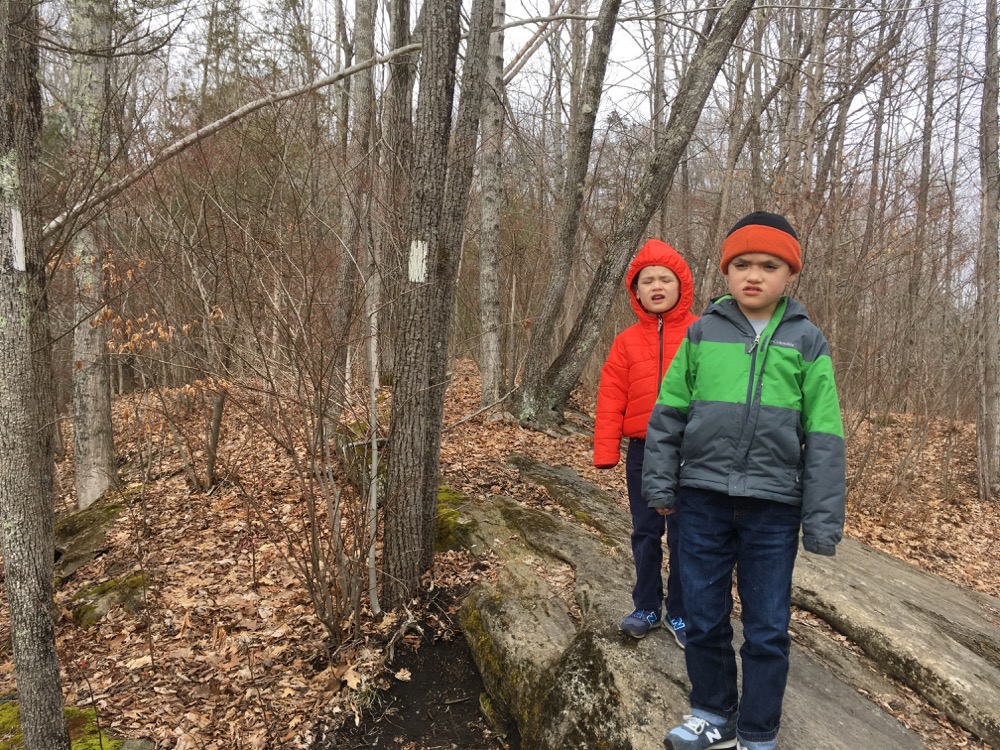 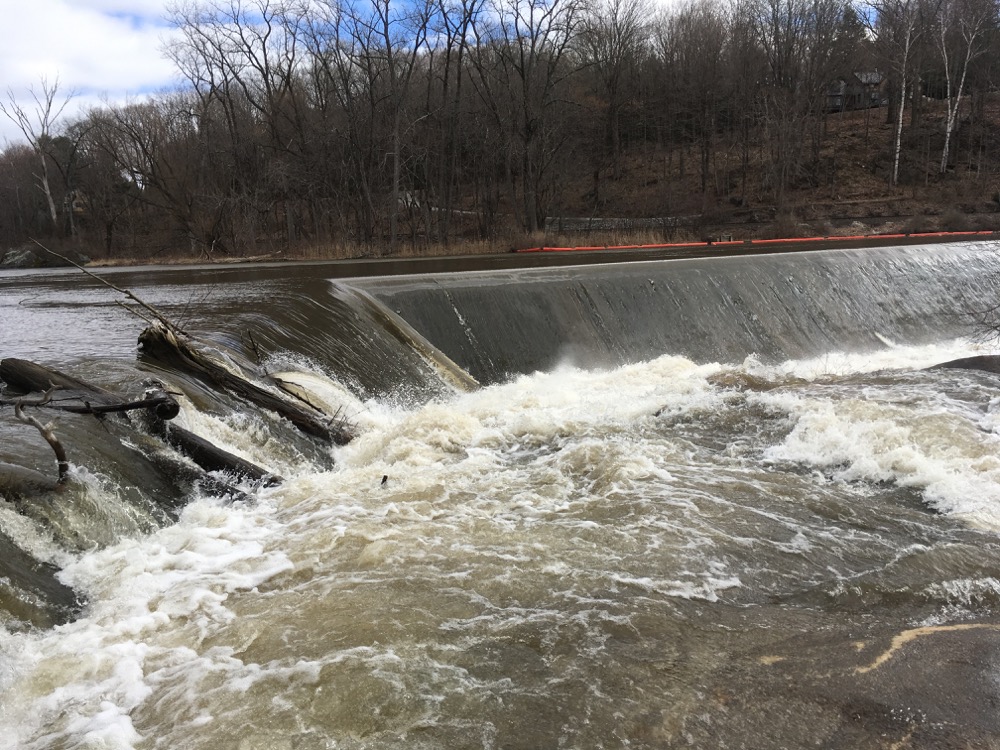 Above the falls where the river is more of a tranquil lake thanks to the dam, there’s an educational loop trail with interpretive signage about the iron industry that used to thrive here and all over Salisbury. The place was called Amesville and signs showcase the history of the Ames Iron Works that made cannons, shovels, wagon wheels, railroad rails, stoves and nuts and bolts during the 1800s.

My sons were not quite as interested in 19th century industrial history, but I forced them around the loop anyway – it’s only like a quarter of a mile long. After the ironworks ceased production, this place became a railroad repair shop of sorts; fixing warped iron rails and such. It’s all pretty neat. 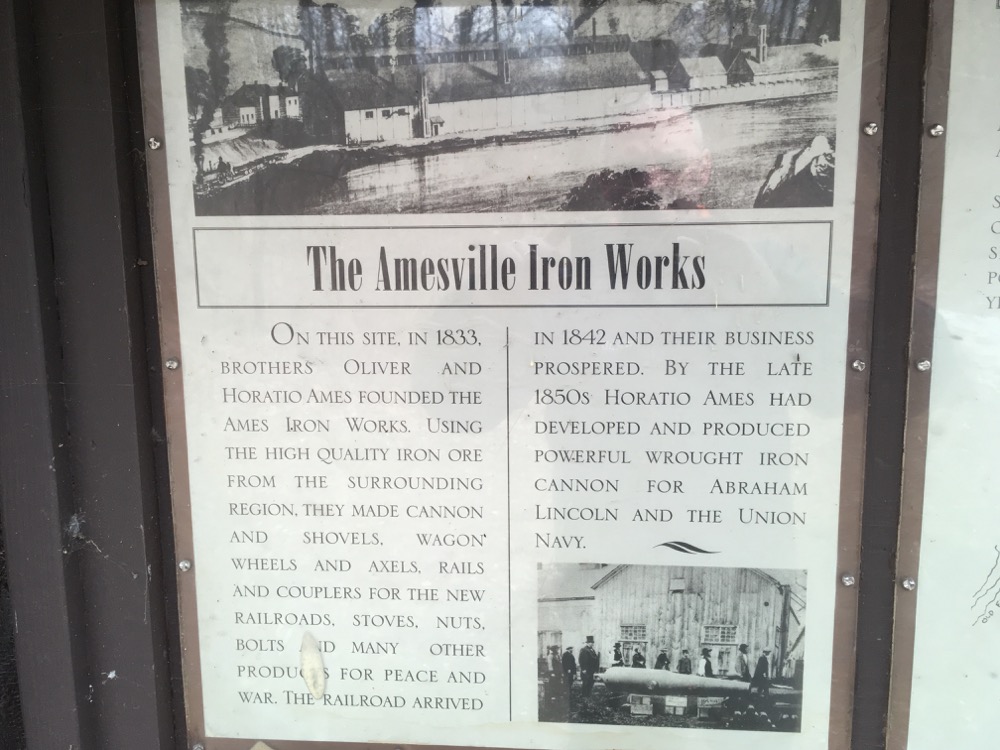 I love when people properly use “cannon” as the plural of cannon.

Niagara Falls? Nah. But Great Falls is great enough that the town of Canaan is never called Canaan but rather Falls Village. And it’s great enough for the Appalachian Trail to make a jug-handle loop to overlook them.

Just try to be sure to come here in the spring after heavy rains to make it worth your while. 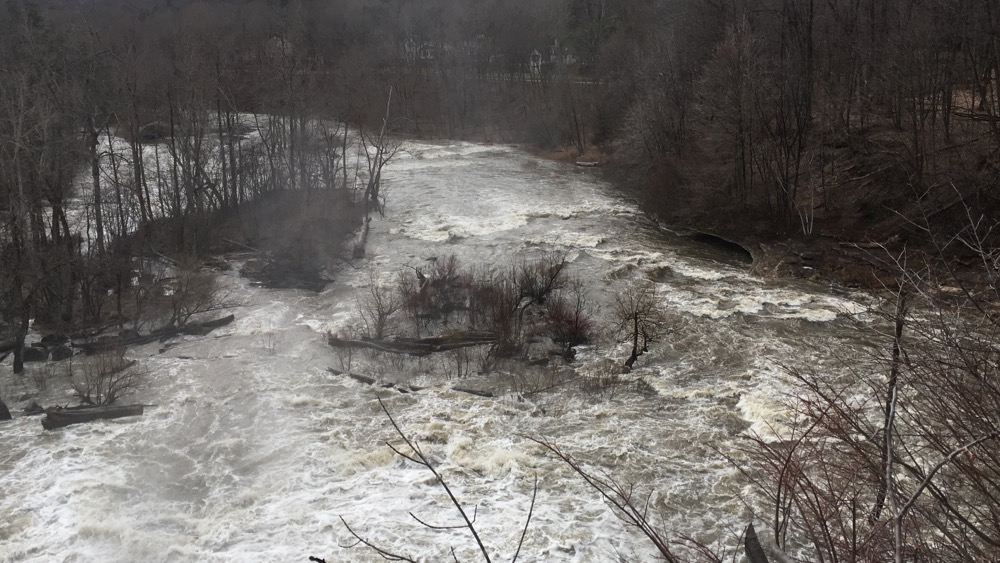