The accordion was invented some 200 years ago, and its American heyday stretched from 1925 to 1960. The instrument is heavy and unwieldy. It cannot play quietly and it can be as piercing as a garbage truck’s squealing brakes. The accordion is not cool and, one could argue, it was never cool.

Welcome to the New England Accordion Museum, one of the most impressive collections in all of Connecticut – and I’ve seen a lot. 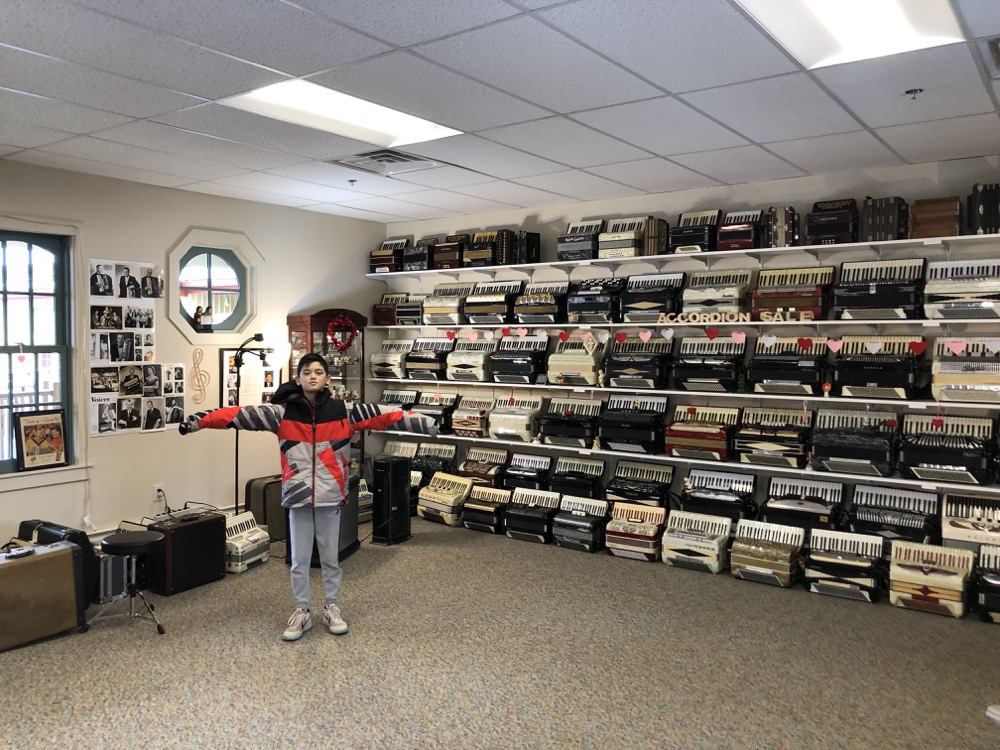 Accordions have long been an integral part of many families. They were there to comfort us in the bad times as well as to help us enjoy the good times. They each have their own special voice, characteristics, flaws and beauty. I guess in a way, the same could be said of each of us.

It’s also Ramunni’s driving theme at his museum. Accordions are… important. And after listening to him for a while and reading about his life and mission, I’ve almost come to believe this as well. 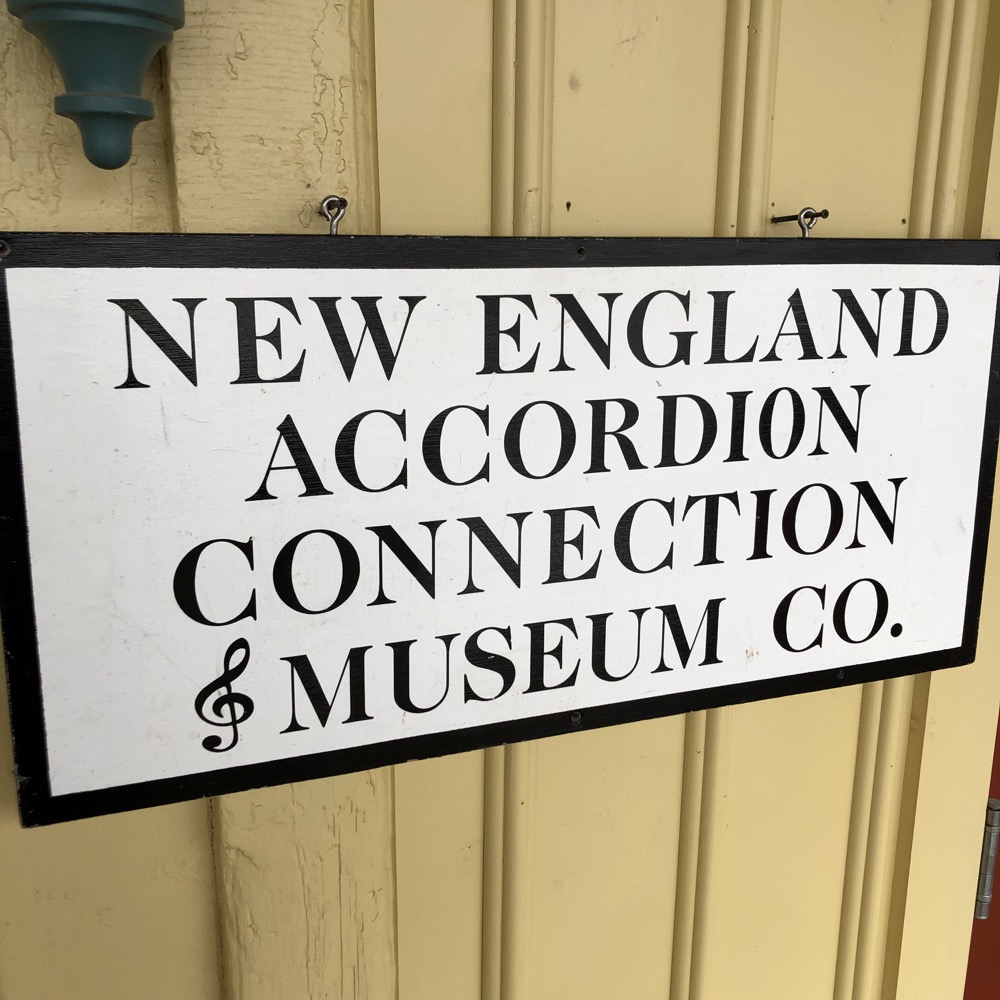 Paul Ramunni is an affable, soft-spoken retiree who lives as far away from humanity as one can in Connecticut: in North Canaan. I joked that the reason he lives in North Canaan is so he can play accordions and not bother anyone. My joke fell flat.

Because accordions are no joking matter. (I still like my joke.)

Paul was a career CPA and a UConn branch professor, teaching introductory accounting courses and financial literacy at the Waterbury and West Hartford campuses. His business’s office was in the historic Union Station in the center of North Canaan, which was nearly totally destroyed by an arsonist in 2001. 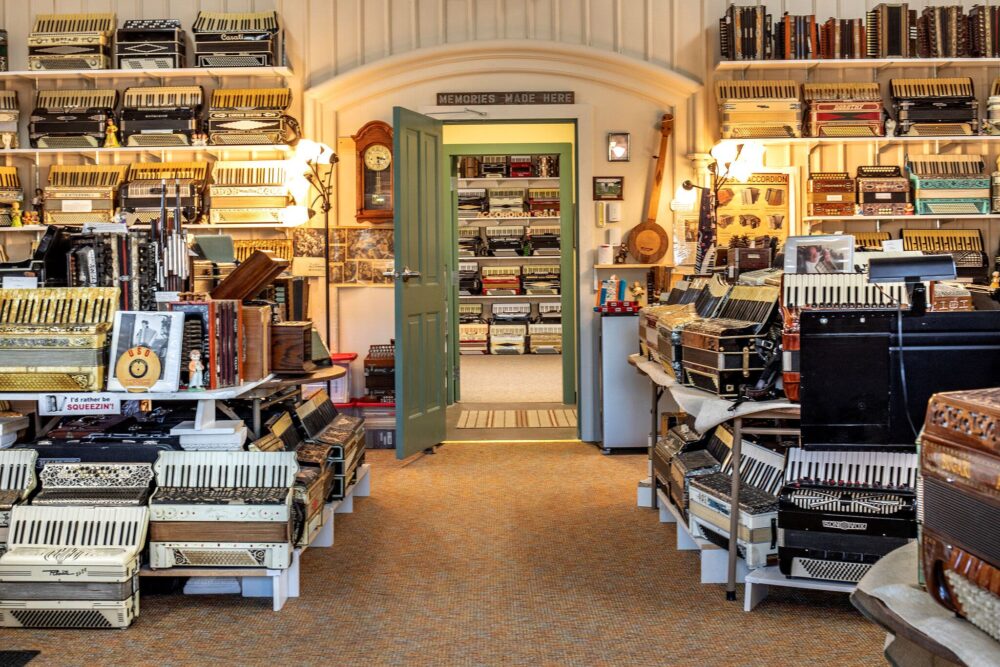 But check this out: the wing of the station where Ramunni worked was saved from the fire and I think he actually owned the whole giant building at the time of the fire. Flash forward to the present day and the rest of the station is rebuilt and is now a beautiful space housing Great Falls Brewing Company, The Connecticut Railroad Historical Association Museum… and the New England Accordion Museum.

But that wasn’t always the case. The story of how Ramunni got from there to here one which involves bullying, divine intervention, and… polka. I guess. Lots of polka. 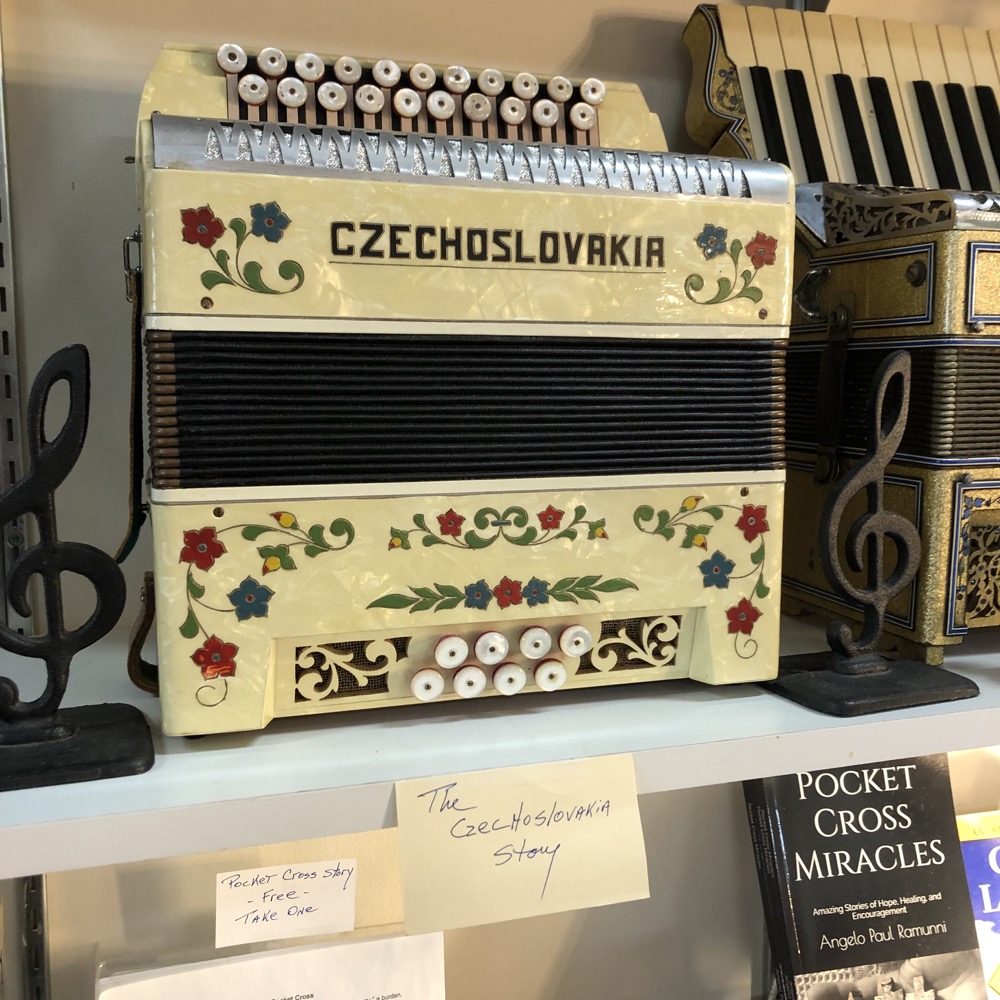 And his parents didn’t back down. He continued to play until he went off to college at which point the accordion was stashed away in the attic and completely forgotten about for 40 years. This is a story that many of us can tell from our own lives; whether it was comic books or basketballs or accordions.

Though I suspect not many of us can say it about accordions. 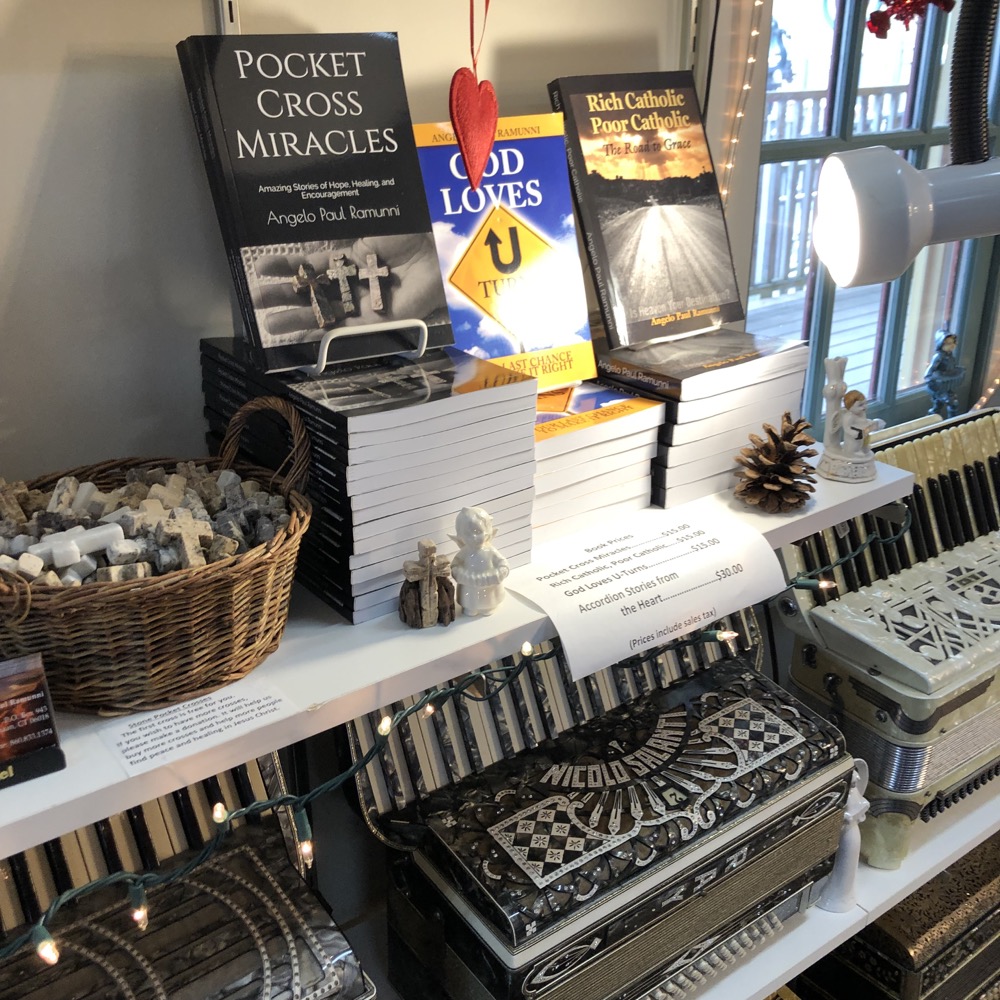 I guess I wasn’t exaggerating about the divine intervention thing

One day, on a vacation to “the middle of nowhere Vermont” with his wife, Paul awoke, looked around at the trees and mountains and said to himself, “I need to play the accordion again.”

I do not know how his wife Marcia reacted to this revelation, but Paul was on a mission. He went in search of an accordion immediately. He needed to play again after 40 years.

He was afflicted with what he calls “accordion fever.” He tracked down an accordion seller in Vermont and purchased an accordion that day. The seller had a pile of 20 small, broken concertinas on the floor. The small accordions were from a Nazi prison camp, and he was told that the guards had allowed the prisoners to keep them so they would keep themselves occupied.

A story. A moving story involving accordions. A kernel of an idea was formed.

The original museum was here, in the garage at Paul’s North Canaan house

Paul began scouring tag sales and curio shops and eBay. He simply needed to collect accordions. He became enamored because with each purchase he got a story; who the owner was, where they played it, and how its sound always seemed to bring joy to everyone.

Those stories enraptured Paul. Stories like how the players took their accordions into war zones and nursing homes and other not-so-happy places. According to Paul, the sound crosses all ethnicities, ages, and politics. Paul’s mission and message is that the accordion – yes, the accordion – can bring all people together across the world. 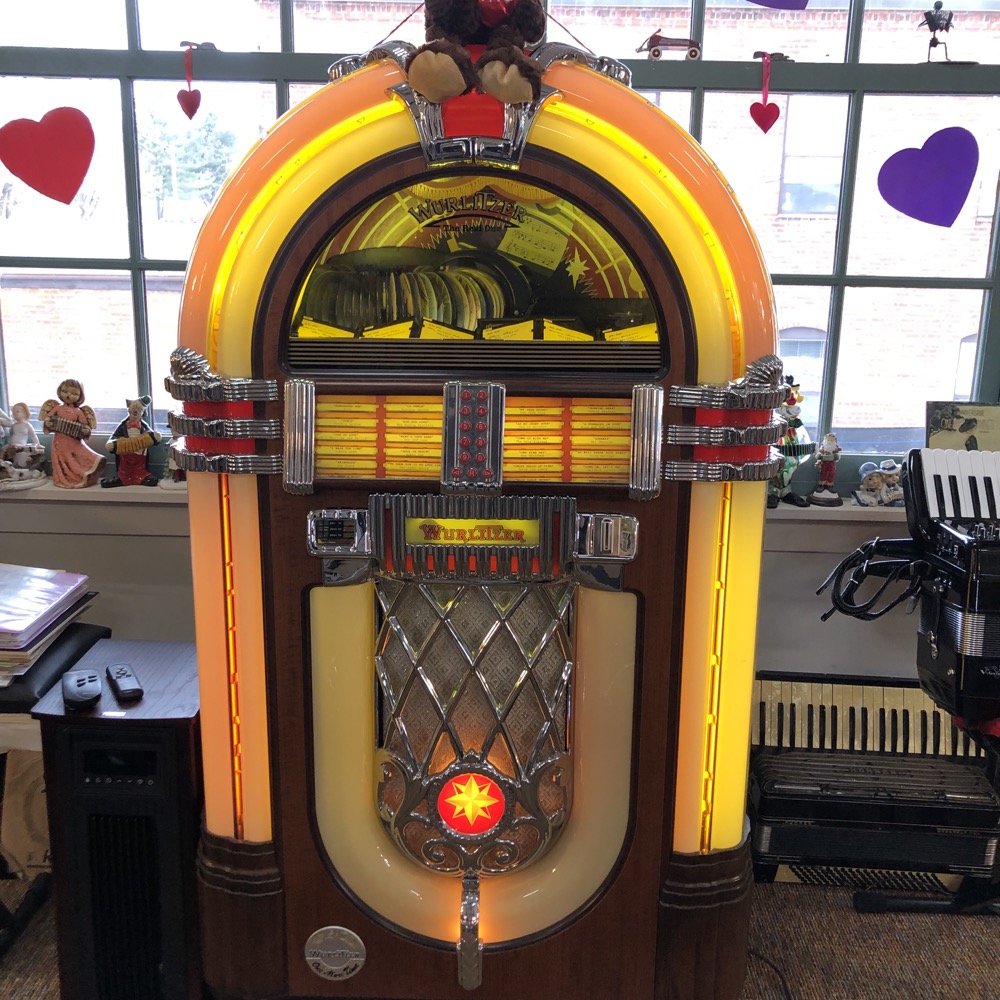 I truly believe he believes this. And it’s infectious. 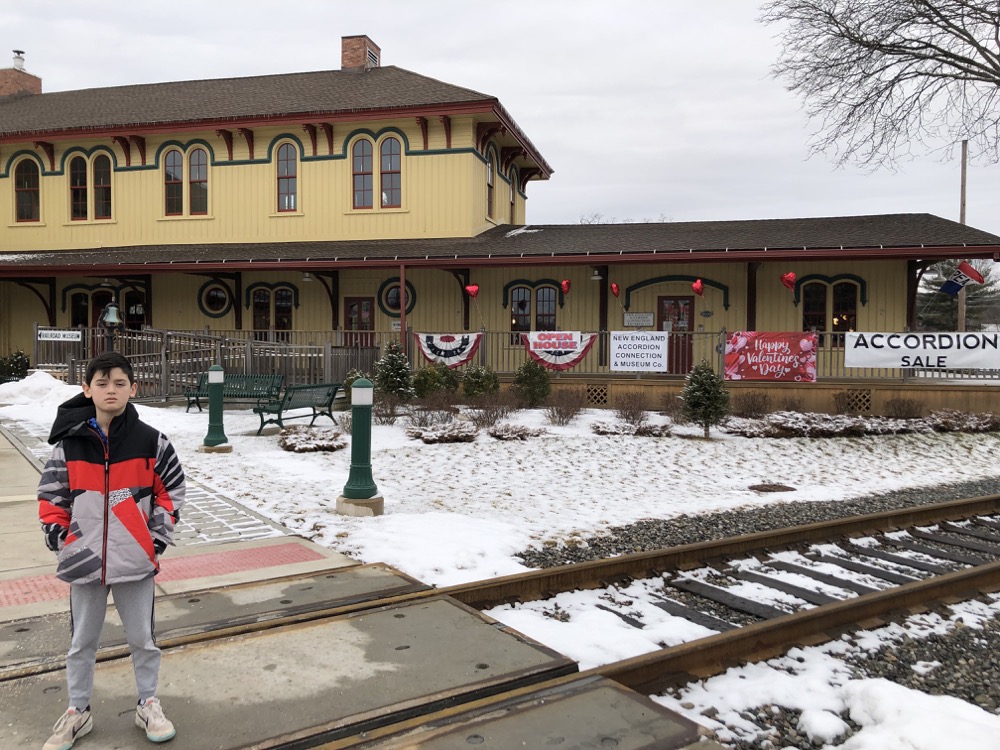 That face when you dad takes you to the accordion museum

“We’re going to an accordion museum.”

“What?! That’s the dumbest thing I’ve ever heard of.”

“You agree it’s dumb. So WHYYYY are we going?”

“Because it’s the dumbest thing!” 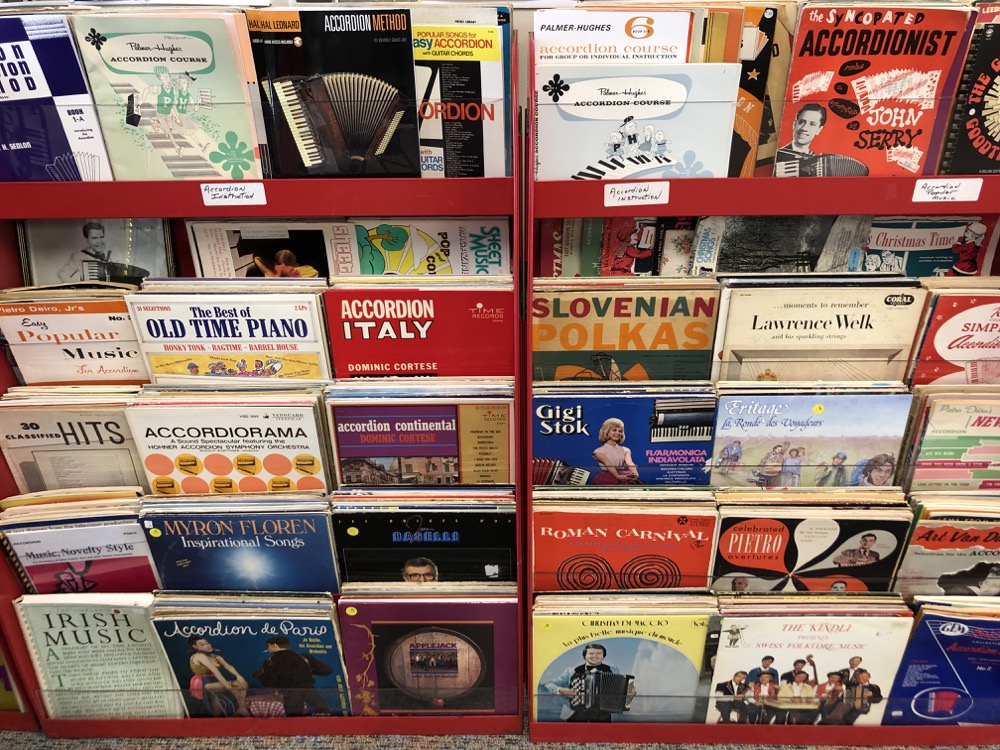 (Apologies to Paul Ramunni and all accordionists and collectors around the world. The museum is not dumb at all, but I was trying to explain to my son that “dumb” things can be really interesting and yes, cool.)

As we approached the door Calvin said, “if there’s any other people here I’ll be shocked.” I opened the door and we were greeted by Paul and about six other people inside. I gave me son a look. He gave me a shocked look. This was a good start. 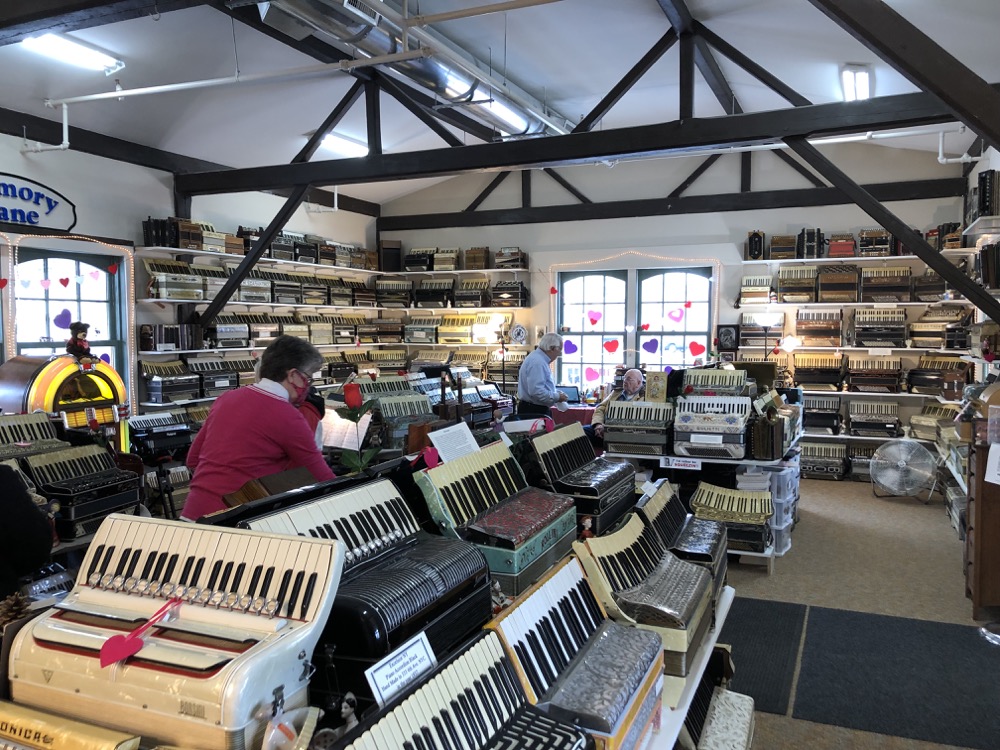 I was immediately blown away by the volume of accordions. I know… you’re reading this and all along have been thinking, “it’s an accordion museum full of accordions, okay.” But I’m telling you, when you’re amidst 700 of the things, all perfectly arranged and nicely lit, it’s an experience.

The New England Accordion Connection & Museum Company is a collection of antique and modern accordions as well as related memorabilia. We display models from the very beginning of the accordion era starting in 1820 all the way up to the current day. One of the main priorities of museum is to keep the spirit and influence of the accordion alive. Our goal is to find and save any and all old accordions and memorabilia so that people interested in this instrument, especially children, will learn to play and enjoy what many people have experienced over the last 200 years with accordions. We exist to display vintage and modern accordions for the general public’s enjoyment and edification.

That’s right. Edification. Not just education. I love this place. 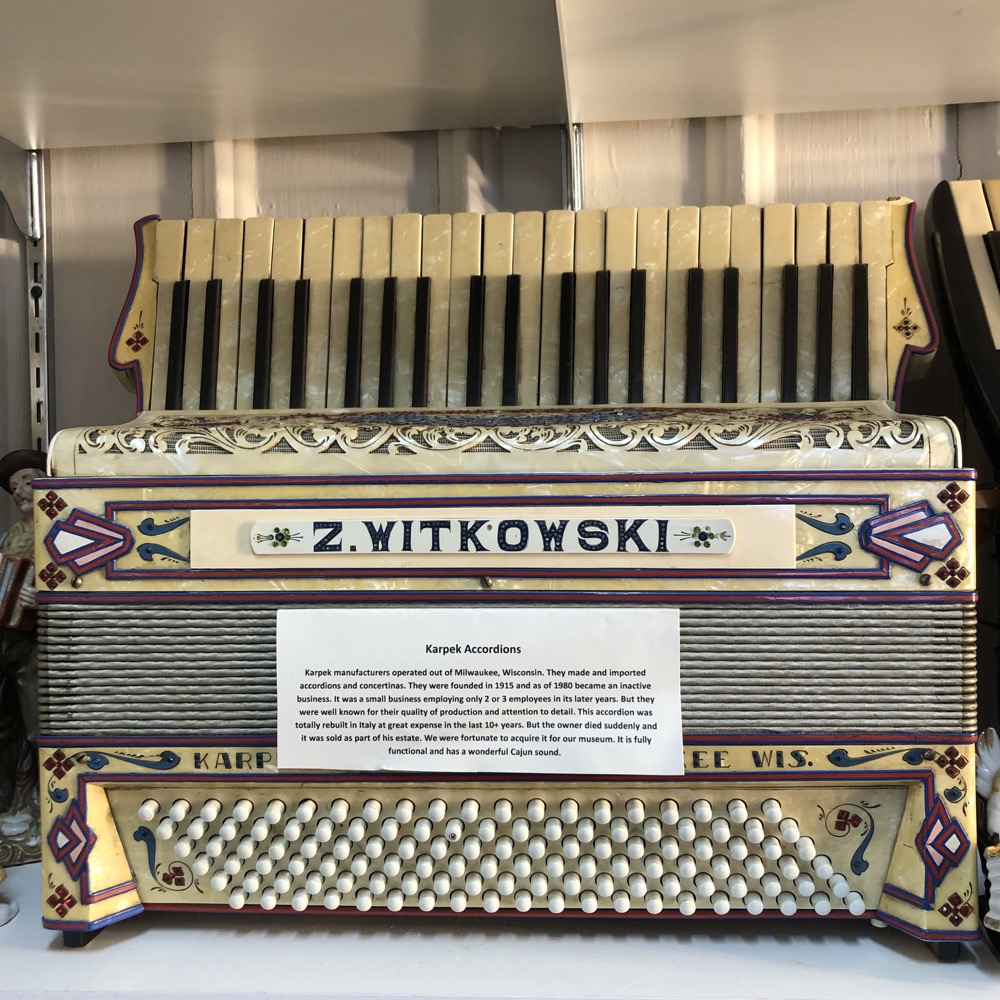 Visitors are told that this is a living museum. You are allowed to touch and hold and play accordions. We were asked a few times if either I or my son played. Paul himself asked. Then he asked again. Then he asked if I was there to buy one for Calvin.

Sorry, sir, I don’t play the accordion. I have the very normal hobby of visiting 700 museums and museum-like places in our small state and then writing long essays about them for handful of people to read. Now, if you’d like to engage in fisticuffs over whose hobby is cooler, that’s fine. I think I can take you.

Fortunately, it didn’t come to that. (Paul seems like the nicest guy and I can’t imagine him ever getting in a fight, even 50 years ago. Also, I did not tell him the reason I had come to his museum because I almost never do. It’s a whole thing. Let’s continue.) 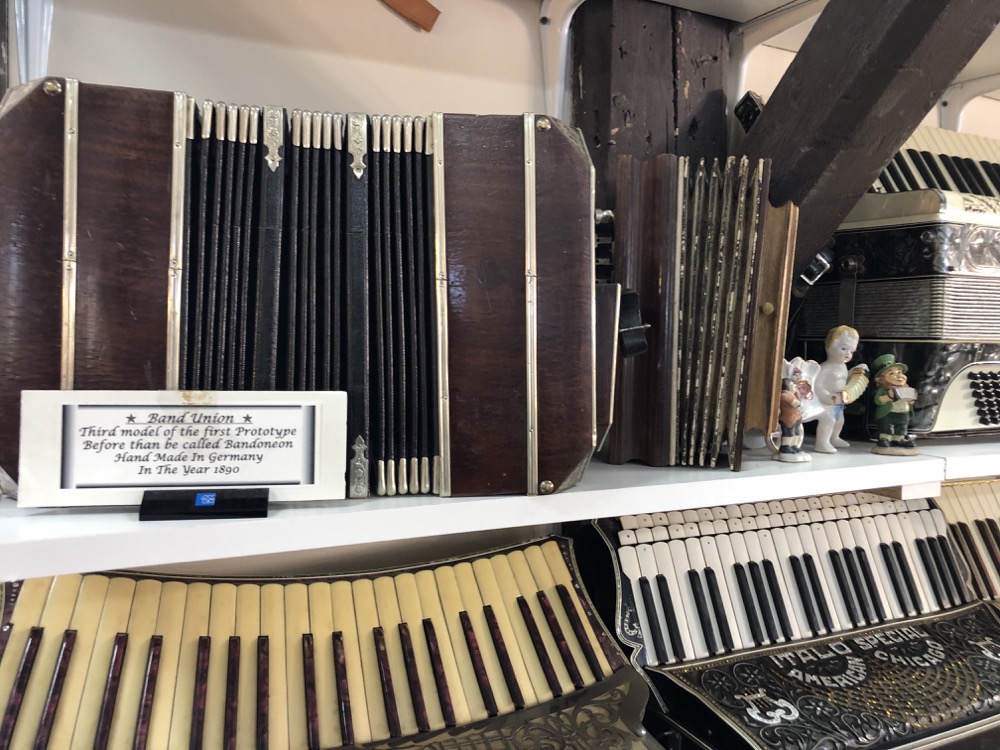 The museum fills two rooms. Beyond the accordions – be they the Luttbeg (one of only 13 in the world with two rows of piano keys), the 1905 “Echohorn” (with an an actual horn attached), the accordion called Walter, named after Walter Mackiewicz of Bristol, who was a tank driver for U.S. General George S. Patton during World War II, the ones that look like elaborate and ornate works of art, the curved keyboards, the ones with “pedals,” and the “porndion” which features a topless woman (which Calvin and I both somehow missed) – there are also hundreds of vinyl records that feature accordion music, accordion sheet music, accordion knickknacks, accordion articles, accordion advertisements and a beautifully restored antique Wurlitzer jukebox loaded with plenty of polkas.

Calvin and I got to enjoy a couple polkas. 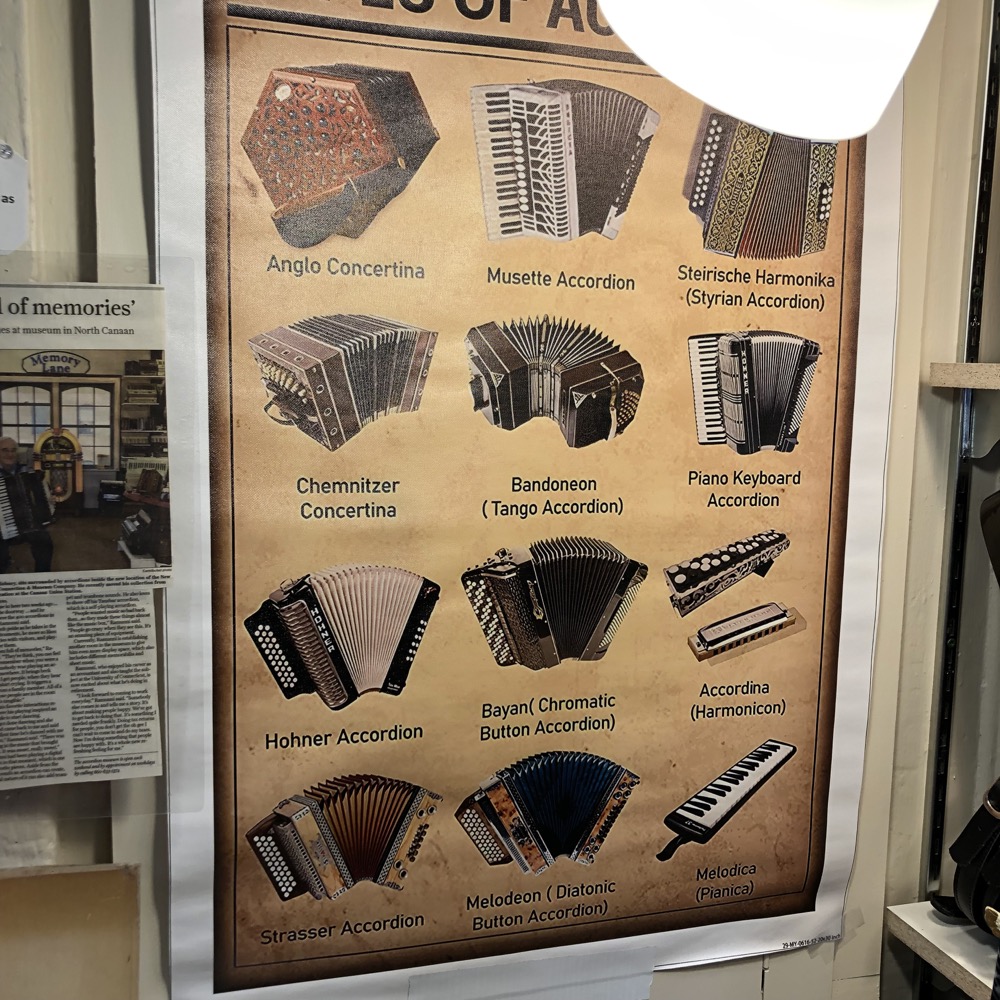 In addition to the accordions on display, this place is also an accordion store and teaching facility. Lessons are offered and groups gather on Saturday mornings to play. It is an accordion repair shop should you need one. And on top of all that, Paul has a sort of mobile version of his museum that he brings to senior centers and the like to spread the gospel of polka and accordions.

And by the time we had listened to a few polkas and heard a few stories from Paul himself, I believe Calvin cracked a smile or two. He politely indulged the senior citizens who seemed excited that a kid was here at the museum (they didn’t need to know the whole truth), and dare I say he wound up having fun. Such is the power of the accordion.

I think of accordions as being like a human being. It’s the only instrument you have to embrace to play. You can’t play it when you’re in a bad mood or when you’re angry. Each instrument has its own voice, personality and way of behaving.

Life lessons from a 200 year old instrument. And that, son, is not dumb at all. These places are the reason I do what I do.

So to Paul Ramunni I say thank you. Accordion to my notes, this place is fantastic. 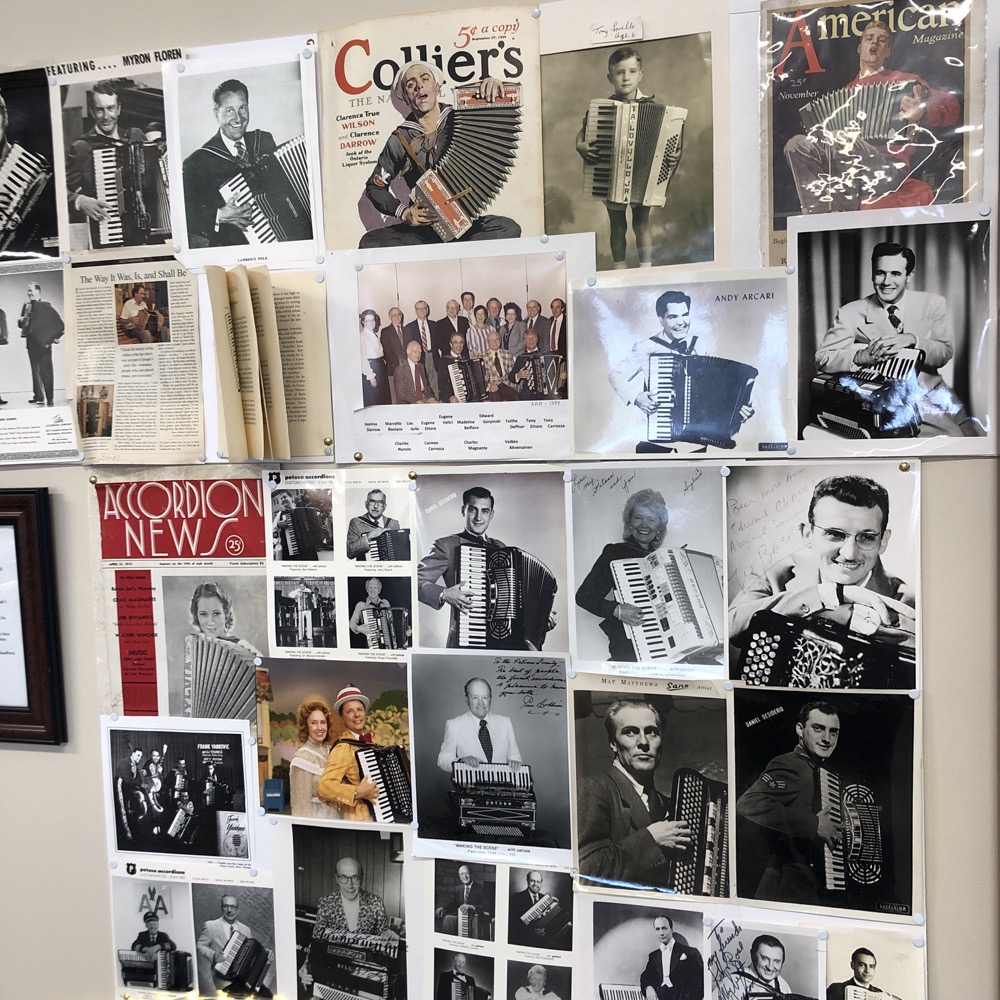 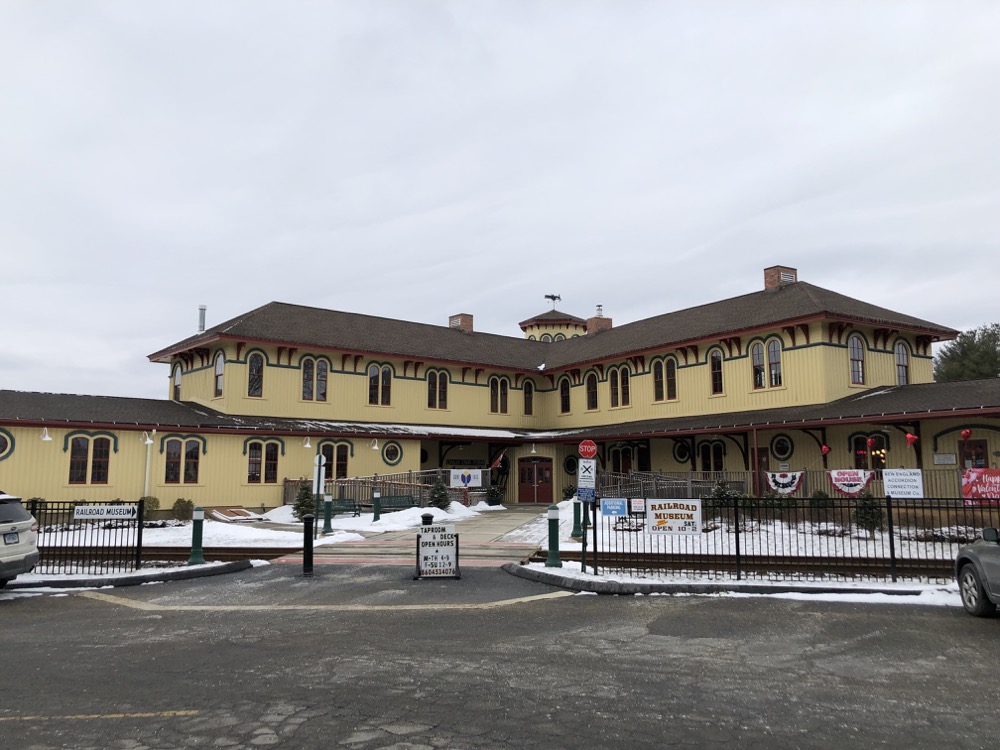 Some information above comes from various articles linked on the museum’s website.