Here we are again. Gathered around the glowing screen to read CTMQ’s wholly uninformed take on… what is it this time? Bosnian food? Bosnian food. I don’t know about you, but when I want to learn about Bosnian food, CTMQ is probably not where I’d go.

But you lot are the best. 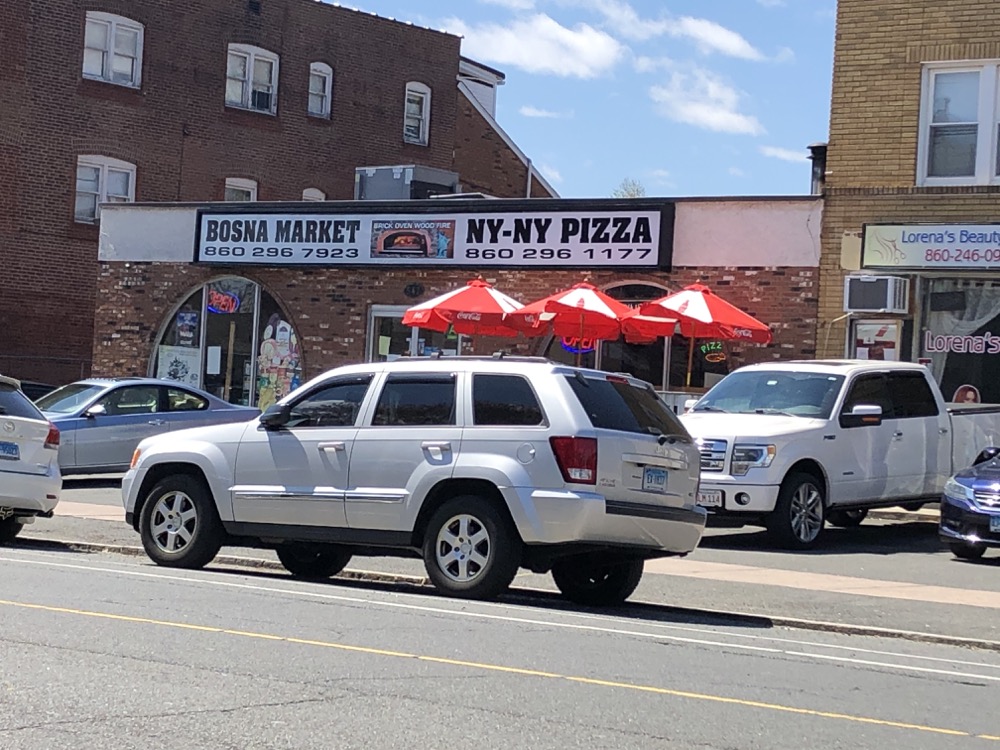 You know what’s funny? I think my favorite book genre is travel writing – I guess that’s not “funny” at all, since it’s essentially what I do here – and I especially like travel writing with a focus on food. I’ve read a ton of those types of books, but whenever I set about to write a page like this one, it dawns on me that I have no idea what I’m talking about.

And since I’m not a reporter and I do my best to avoid conversation with the folks at these establishments, I do myself no favors. But at the same time, I rather love the “Connecticut Restaurant Tour of the World” thing that I created. After all, it’s downright awesome that there’s an Italian pizza restaurant on Franklin Avenue in Hartford with a section of its menu called “Bosnian Corner Specials.”

While I may not know anything about burek, zeljanica, or cevapi pljeskavica, I do know how to find these places in our little state. And bonus! NY-NY Pizza shares a wall with Bonsa Market, a little store stocked with all sorts of Bosnian and Slavic meats, cheeses, and grocery items. 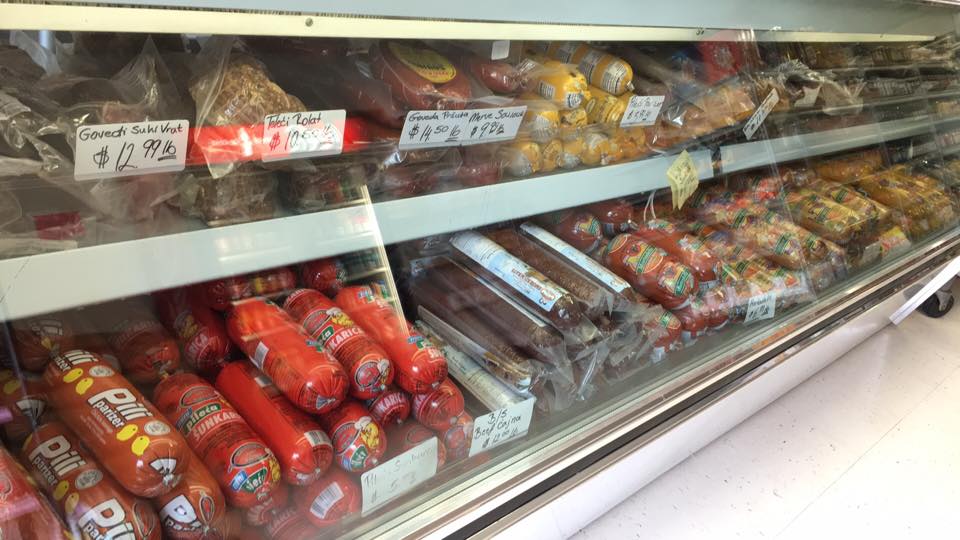 Bosnia is actually Bosnia and Herzegovina, one of several countries carved out of the former Yugoslavia. It’s surrounded by Montenegro, Serbia, and Croatia, which seems to have taken the prime real estate along the Adriatic Sea across from Italy.

It is home to Sarajevo. It is where the assassination of Archduke Franz Ferdinand took place, igniting World War I. And it is home to, I assume, the owners and staff at NY-NY Pizza. I can confirm they were speaking to each other in what seemed to me to be a Slavic tongue. For what that’s worth.

The restaurant itself has some spartan sit-down booths, but this appears to be mostly a take-out joint. They have a brick oven and claim to make “New York style” pizza. A quick perusal of the review sites tells me that people generally seem to like their pizza, are a bit less enthused about the whole Italian menu, and are intrigued by the Bosnian specials.

Note to self – Never upset a Bosnian: 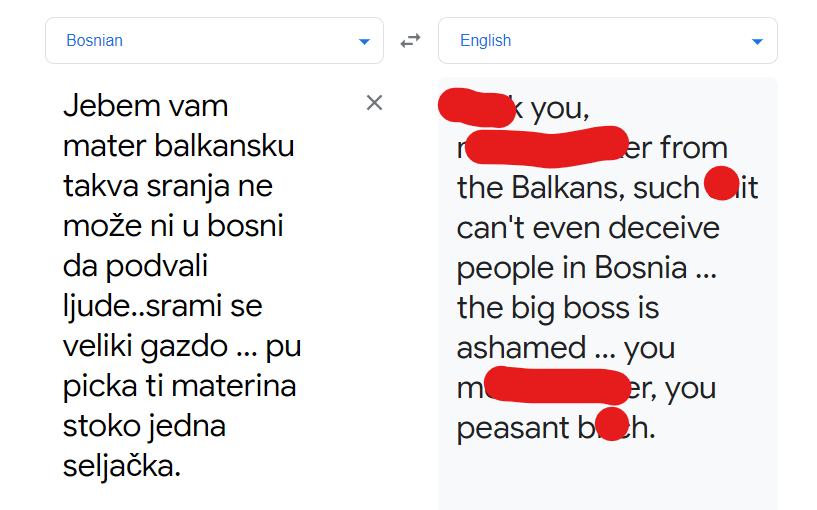 Oh my. Fortunately I hadn’t read that before ordering my slice of burek. (There are plenty of positive reviews on Yelp, by the way.)

Burek is an integral part of Slavic cuisine. According to my 25 seconds of Googling, burek is commonly found throughout Bosnia, Serbia, Montenegro and Croatia. I ordered without having any clue what it was, but I’ll help you out. Burek is made with phyllo pastry and filled with meat or cheese. It is a sort of fast food in the Slavic countries and is usually sold there with a side of plain yogurt which is used as a dip (NY-NY does not offer the yogurt though). Burek is extremely versatile. The most common filling being meat with onions, or feta and spinach. 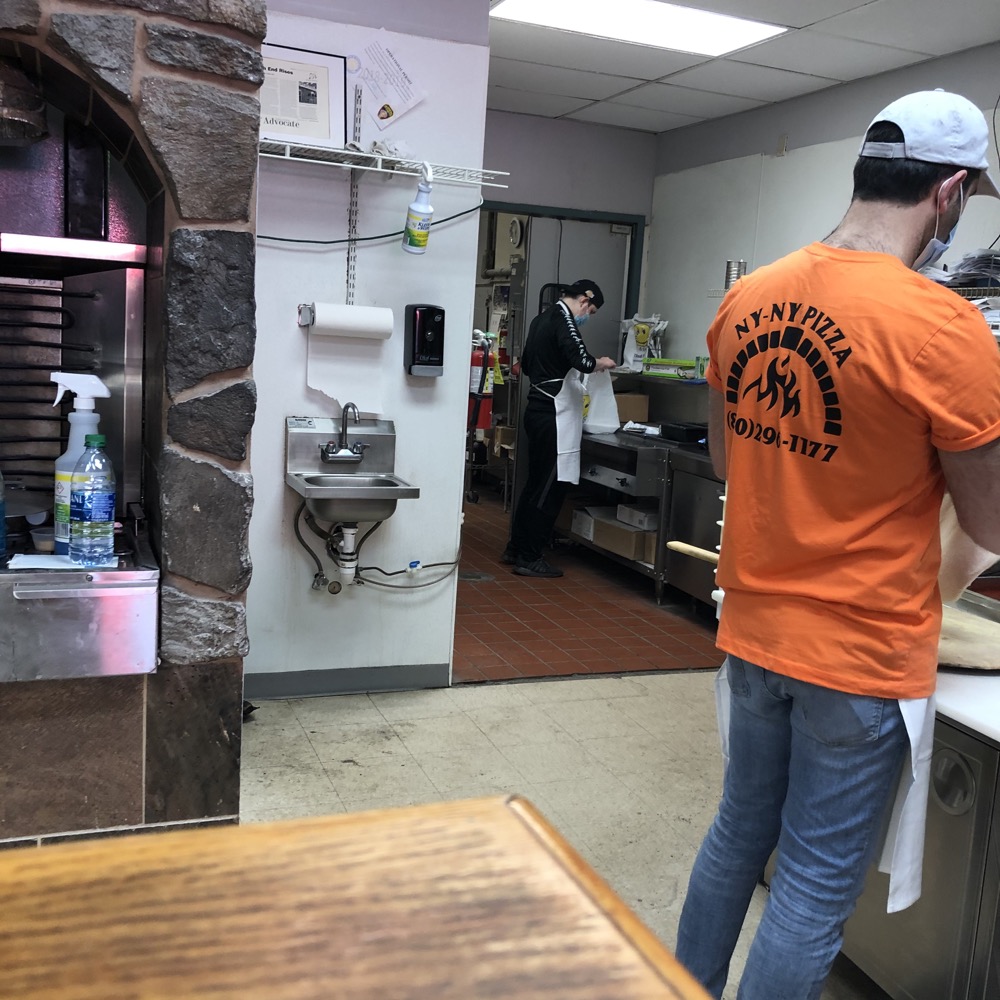 Here, they offer a ground beef filling, though lamb is apparently more common in Europe. I went with the feta cheese burek, described as “feta cheese pie,” which doesn’t sound very good. But now that I know this is supposed to be a sort of quickie carb-laden, greasy grab and go type of thing, I get it.

And it was really pretty good. It’s tough to pull off that many layers of phyllo and have it still be good later in the day (or week), but it was decently airy. A bit chewy and dense here and there, but I could appreciate the effort. Also, the slice was quite large for five bucks or so. I would eat more burek in my life. 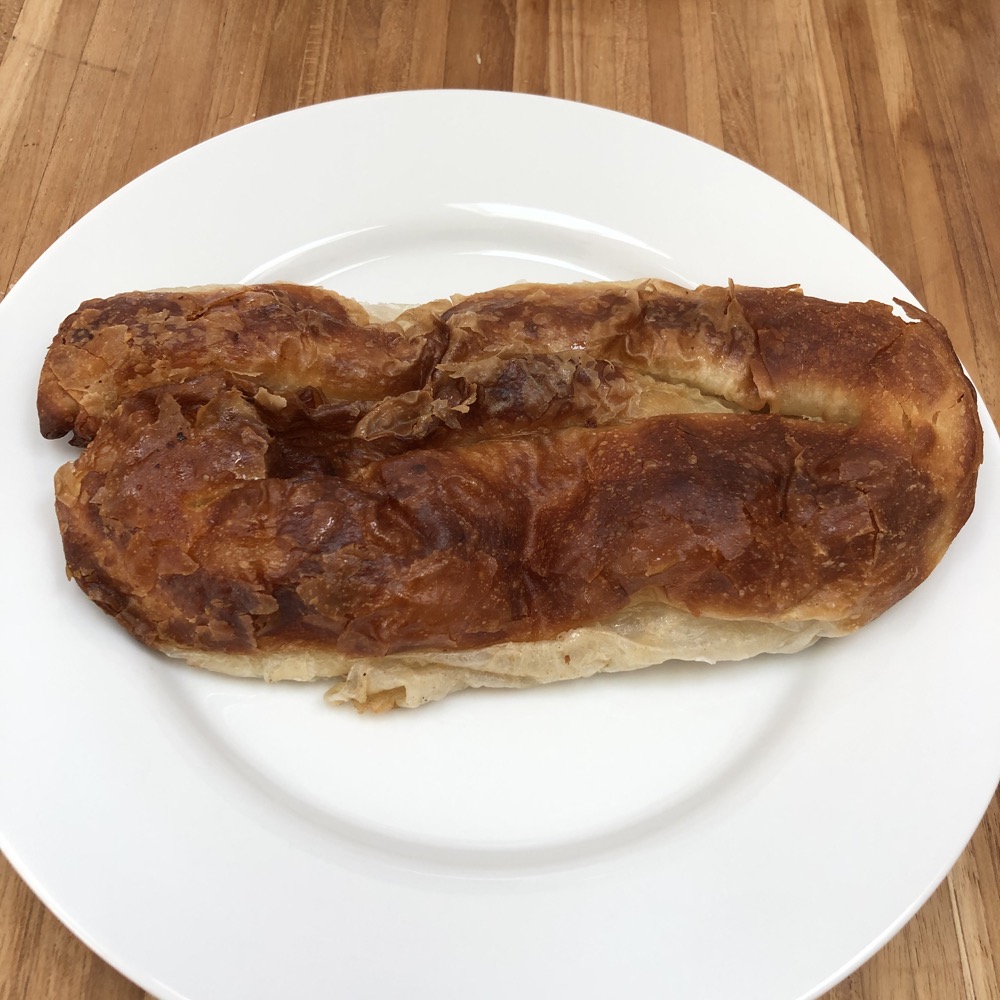 Moving on to the cevapi, described as “grilled beef sausage stuffed into lepinja bread with chopped onions and choice of sauce: Kaymak or Ajar Sauce.” Sounds simple enough, except for the sauce bit. When I went to pick it up, the guy there asked me which sauce I wanted and I had to come clean to him: “Sorry bro, I’m not Bosnian. What is kaymak and what is ajar?”

He laughed and told me I wanted the ajar because “it’s a million times better with ajar.” Kaymak is white yogurt sauce, ajar is roasted red pepper sauce. Since I wasn’t a Slav or a Turk, I think he just figured I wouldn’t like their traditional sauce. 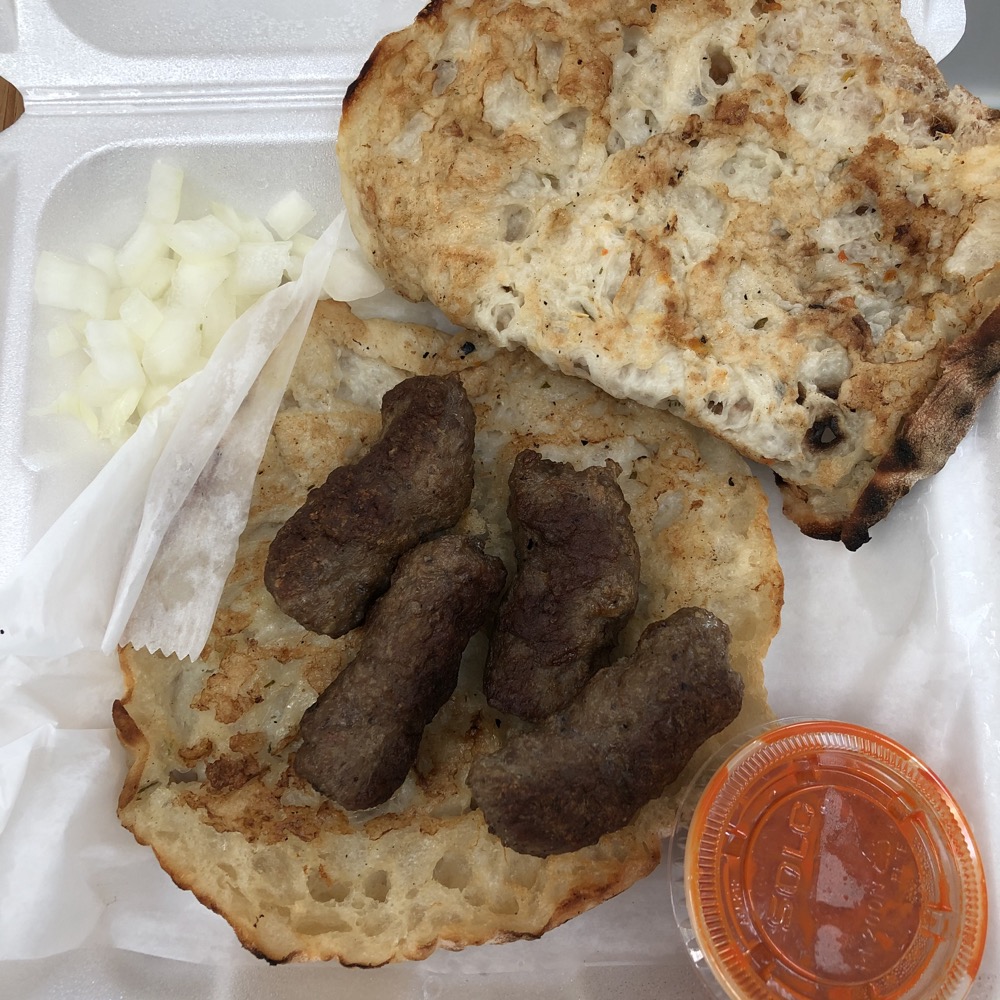 And he’s absolutely correct. Upon examining my cevapi I was a little surprised by the unfamiliar shape of the meat. But another lightning round of Google shows me that this is traditional and normal. Cevapi is considered a national dish of Bosnia and Herzegovina, and is also common in Serbia, Croatia, Kosovo, Albania, Montenegro, North Macedonia and Slovenia.

Grilled tube meat, delicious flatbread, and some pepper relish. (I didn’t eat the chopped white onions that were also provided.) It was… okay. Like, I’ve never had cevapi on lepinja in the dining room of an old Bosnian grandmother, but I’m guessing hers tastes a bit better and a bit fresher. The ajar sauce needs more zing and the sausage more pizzazz. Maybe. 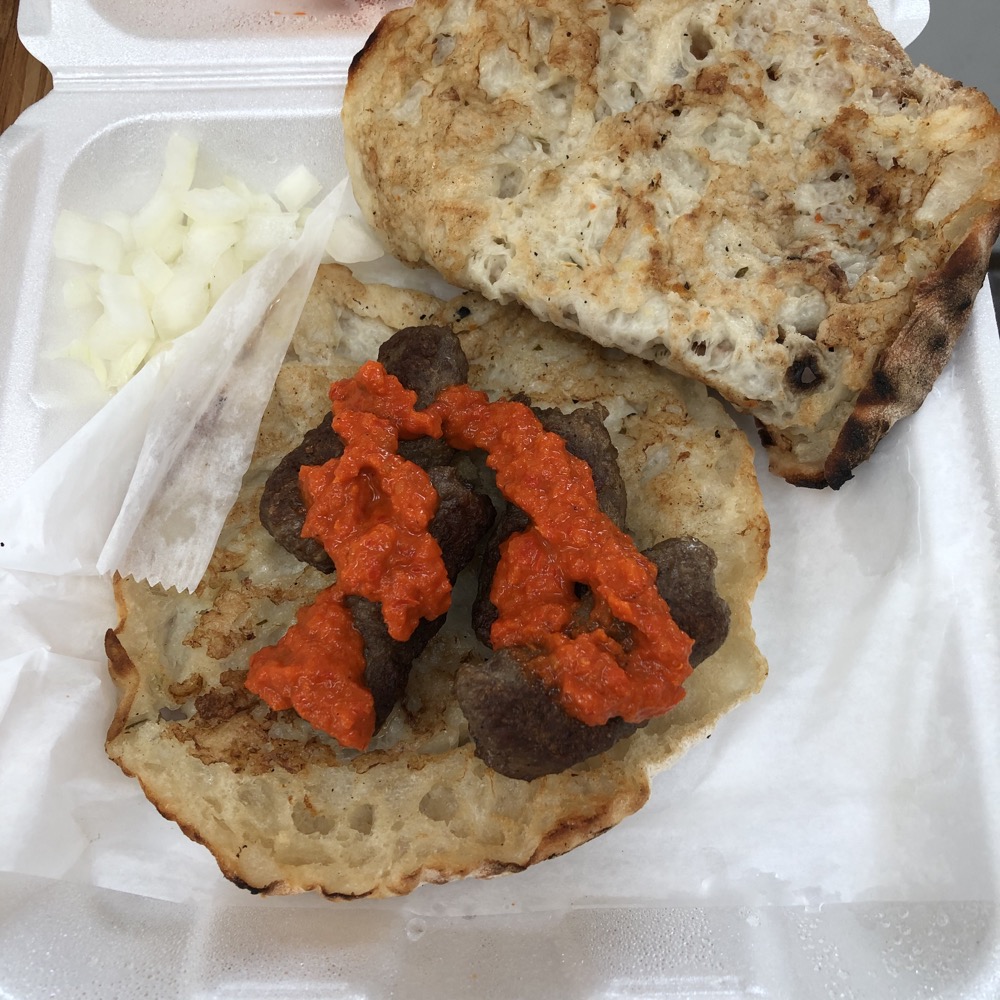 I ate most of it, and found the roly poly Lincoln Log sausages a bit annoying to eat in a pita type bread. I loved the slightly charred bread, by the way. (I saw that NY-NY does sell this in a patty form I think, which I’d recommend for simplicity’s sake.)

I don’t know if this is the only restaurant in Connecticut with a Bosnian menu, but it’s the only one I’ve found. And NY-NY has been making this stuff for over a decade now, so there’s a market around here at least. I enjoyed my meal for the most part, and I enjoyed my “trip” to the Balkans.