In February 2022, RiverQuest was purchased by the Connecticut River Museum. There shouldn’t be any noticeable changes to the programs.

Isn’t it crazy that humans did our best to eradicate our country’s national symbol? Wouldn’t that just have been the most American story ever? “The Bald Eagle, symbolizing America’s ascent, power, and soaring domination is now extinct because of its powerful and dominating people.” 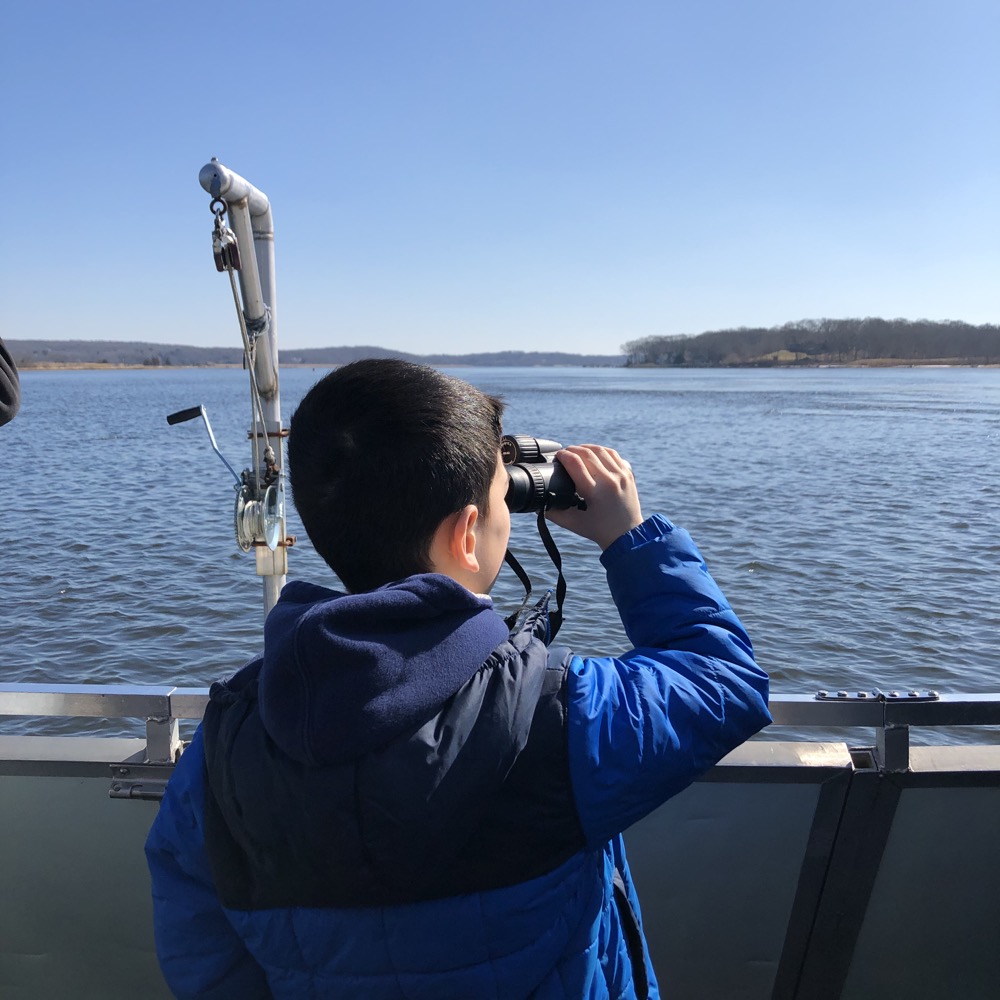 I know it’s not that black and white, but by the 1960’s, there were only 500 nesting pairs of bald eagles in the lower 48 states. According to the U.S. Fish and Wildlife Service, there are now about 10,000 nesting pairs. Connecticut has its own success story, with more than 70 nesting pairs and 50 active nests, along with a growing winter population.

I guess if I put my cynicism aside, that is the real American success story. Bald eagles are now so commonplace along Connecticut’s rivers that a company can run boat trips and almost guarantee that their paying customers will see bald eagles. And that’s exactly what RiverQuest has been able to do since the early 2000’s. 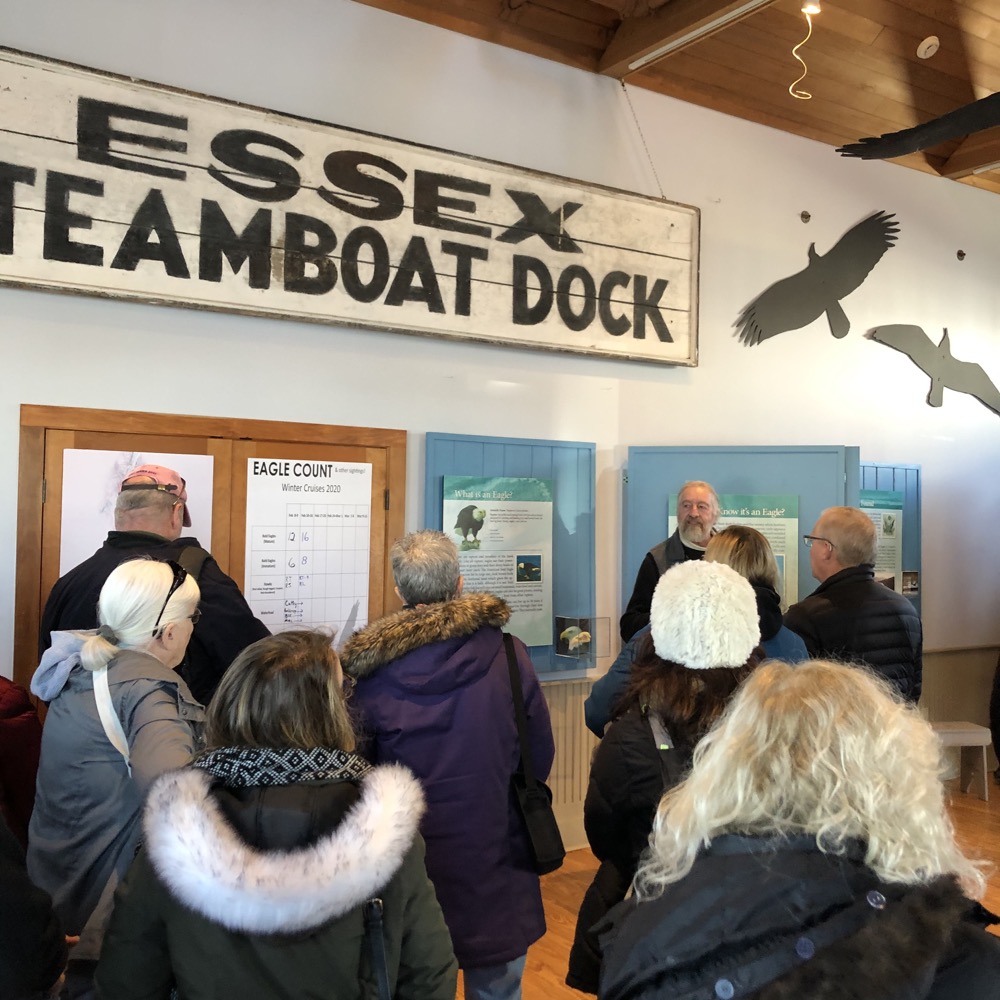 The Connecticut River is a popular wintering spot for eagles who come down from Canada to enjoy fishing in the open waters. And it has become a popular spot to book RiverQuest bald eagle cruises to check them out.

Calvin and I bundled up and made our way down to the Connecticut River Museum in Essex to catch the cruise. The ticket price includes the museum, and that’s a pretty good deal. Especially since the impressive model train display is running in winter when the eagle cruises take place. 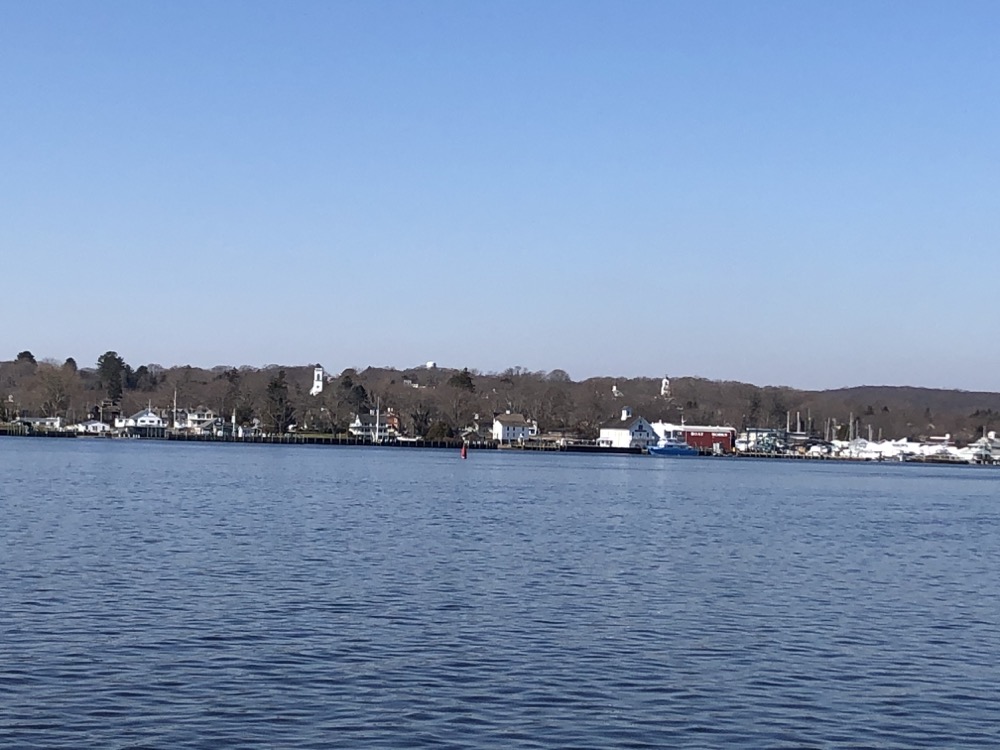 The cruise begins inside with some background information and a quick overview of the plan for the day. We had clear blue skies and calm wind, so no worries on that front. We hopped aboard, unmoored, and hit the river.

We first headed south from the museum for a bit towards some thatch bed areas. Our captain would point out every single bird anyone saw, from gulls to merganser to red-tailed hawks. I’m guessing that the point of heading south first was to see some birds that hang closer to the Sound? I don’t really know, but we got two passes by Essex and as everyone knows, Essex is one of Connecticut’s prettiest towns. 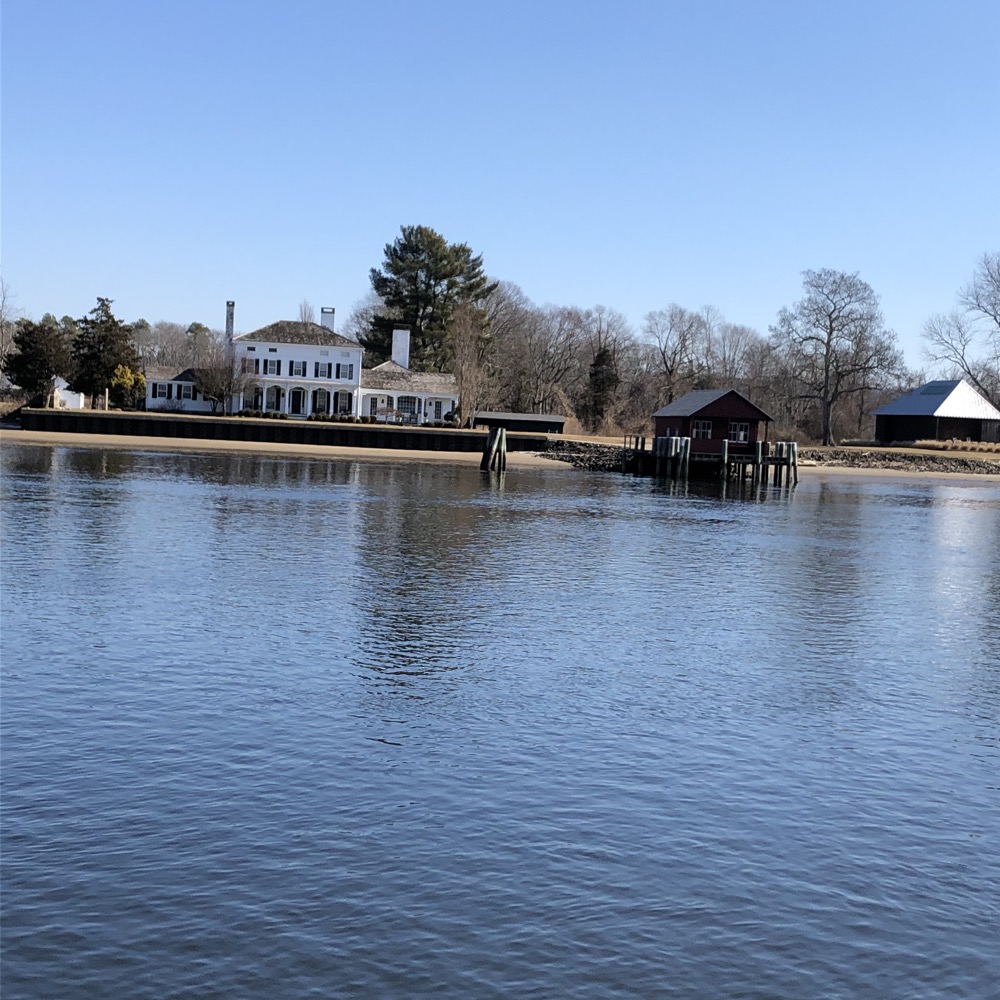 RiverQuest is essentially Mark Yuknat the Captain and Mindy the Admiral. Mark and Mindy. Mark is not from Ork (although “Yuknat” does sound very alien) as both were raised in Old Lyme. They have been cruising on the lower Connecticut River and Long Island Sound in various vessels since childhood and are very knowledgeable on the history, ecology, and local wildlife that abound on the lower Connecticut River. They’ve brought there son into the game now as well.

As the boat turned north towards the eagles’ hunting grounds, I learned that the trip isn’t all about birds. Mark regaled us about the area and some of the local historical stories. But before we lost interest, and after a dozen non-eagle bird sightings, we saw our first bald eagle! 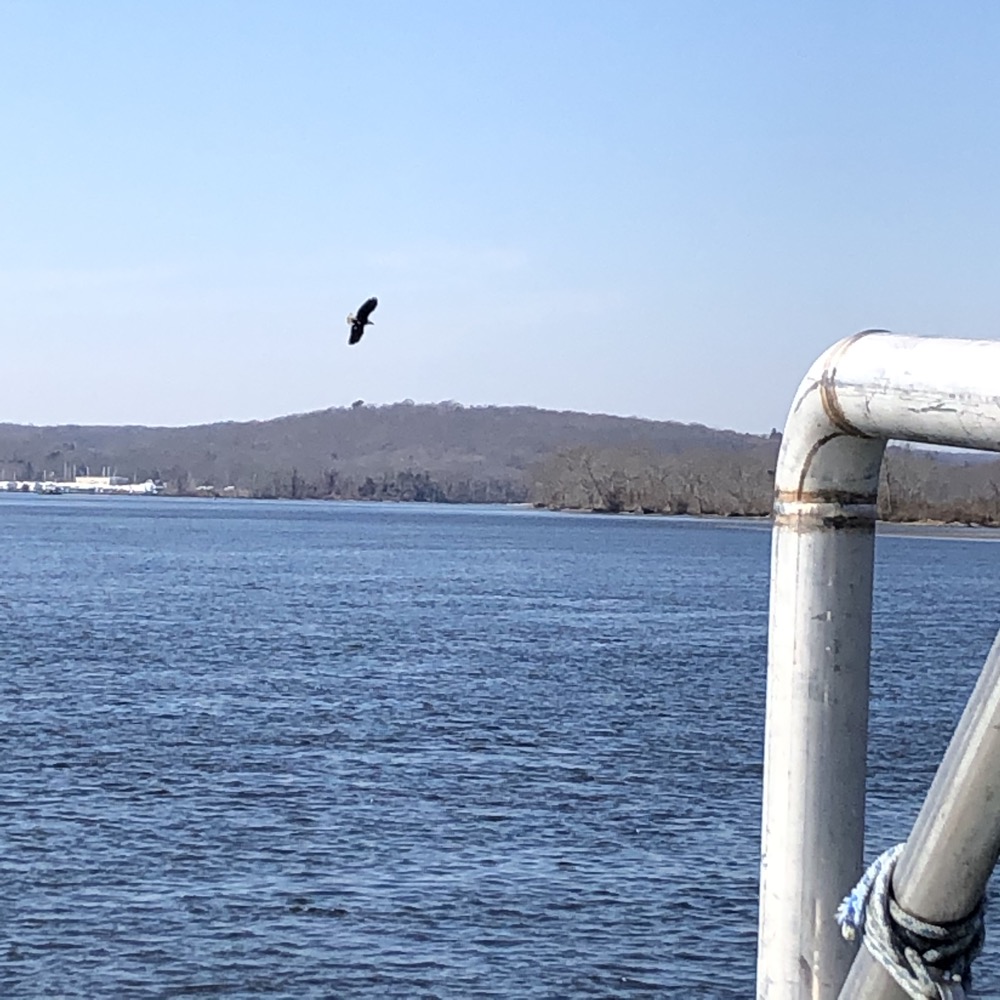 Whoa! Now, keep in mind that I am not a photographer and was equipped only with an iPhone. Sorry. I’ll steal some good pictures from RiverQuest’s site, but the point for me was not taking pictures but rather just being there, on that boat, with my 10-year-old son, seeing bald eagles soaring above.

It was, in a word, really cool. Then we saw another eagle. Then another.

We chugged near cliffs on the Lyme side of the river called Joshua’s Rock. The formation was named after the son of the Mohegan Tribe chief Sachem Uncas. According to legend, he would sit on top of the rocks and watch tribe members fish below. So many legends of Native Americans up on cliffs in Connecticut, you’d think all they did all day was sit on cliffs and jump off of cliffs. 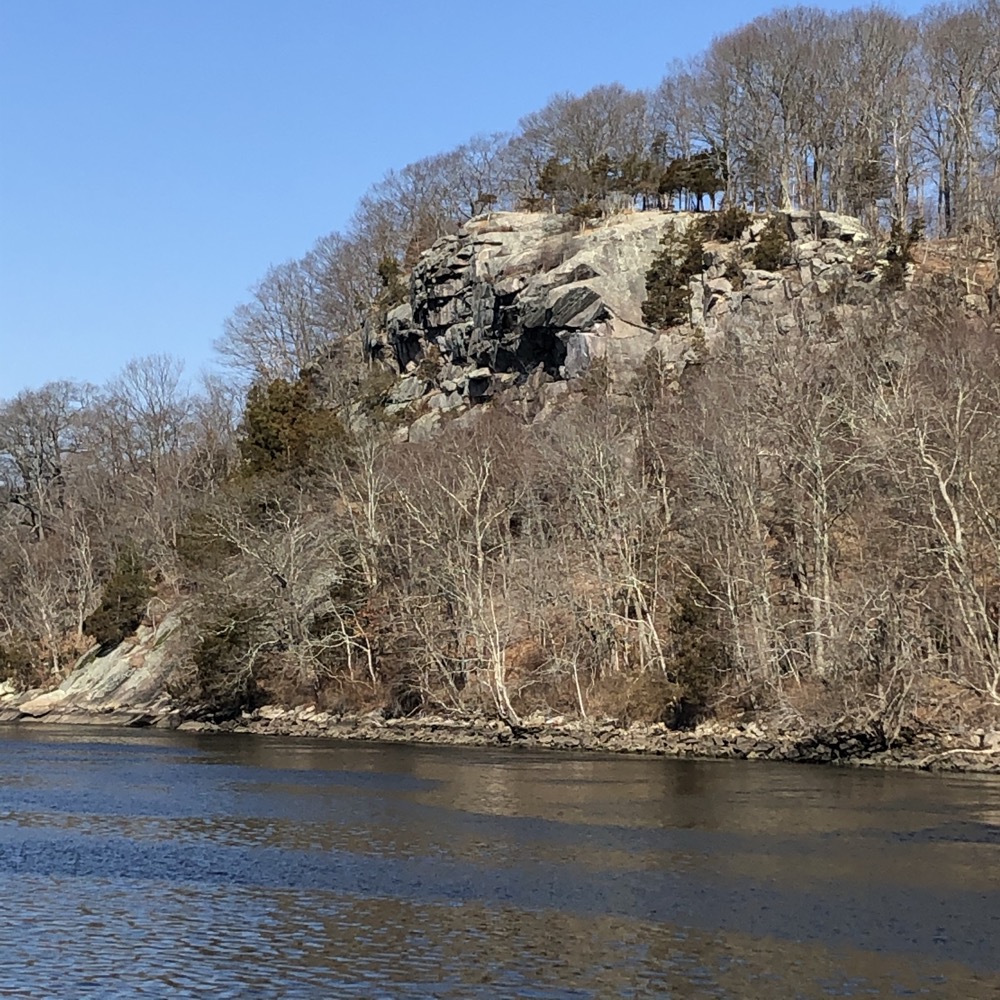 Mindy pointed out Hamburg Cove, where the Eight Mile River flows into the Connecticut. She noted the natural geological terraces carved by glaciers in Essex’s North Cove. As we approached Selden Island – the largest island in the whole Connecticut River – Captain Mark began telling another story. He has lots of stories and they’re the kind of stories I happen to love.

But before he could get going, an eagle glided along the surface of the river, plucked out a fish, and took it to the sandbar on the southern tip of Selden Island. 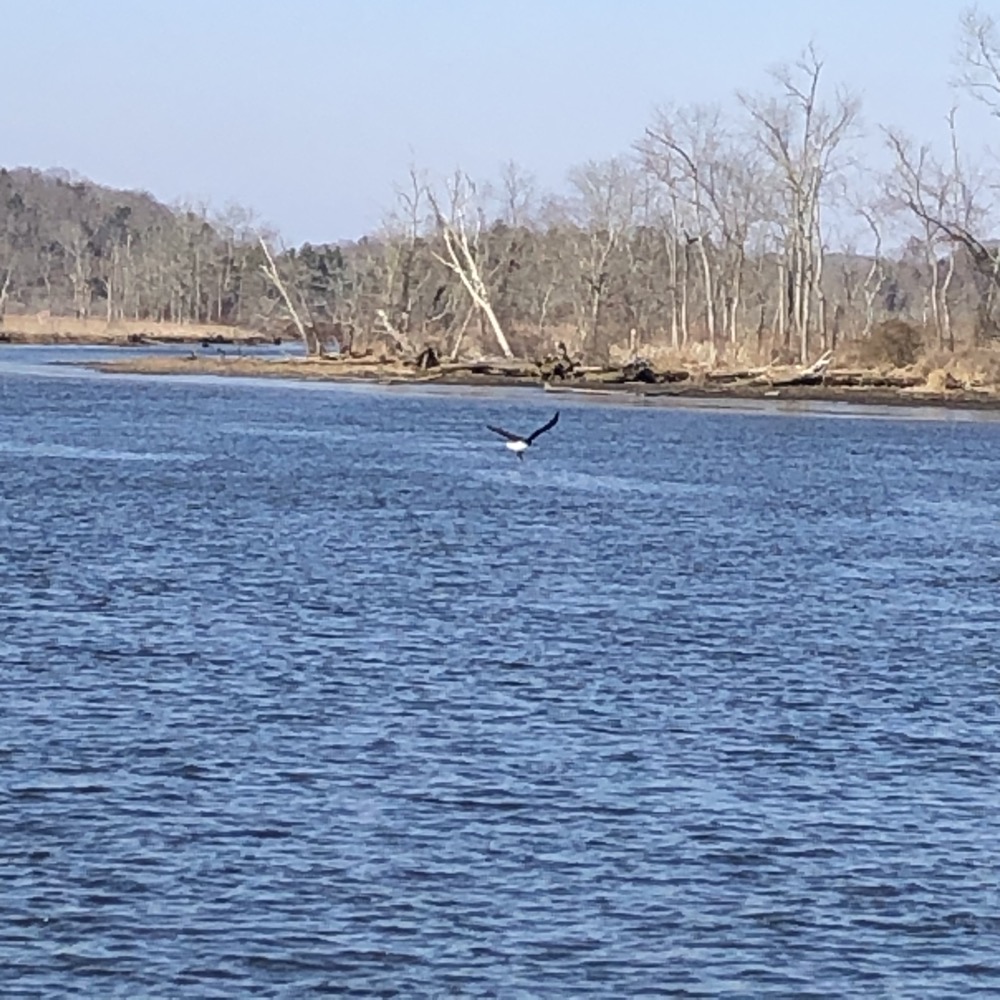 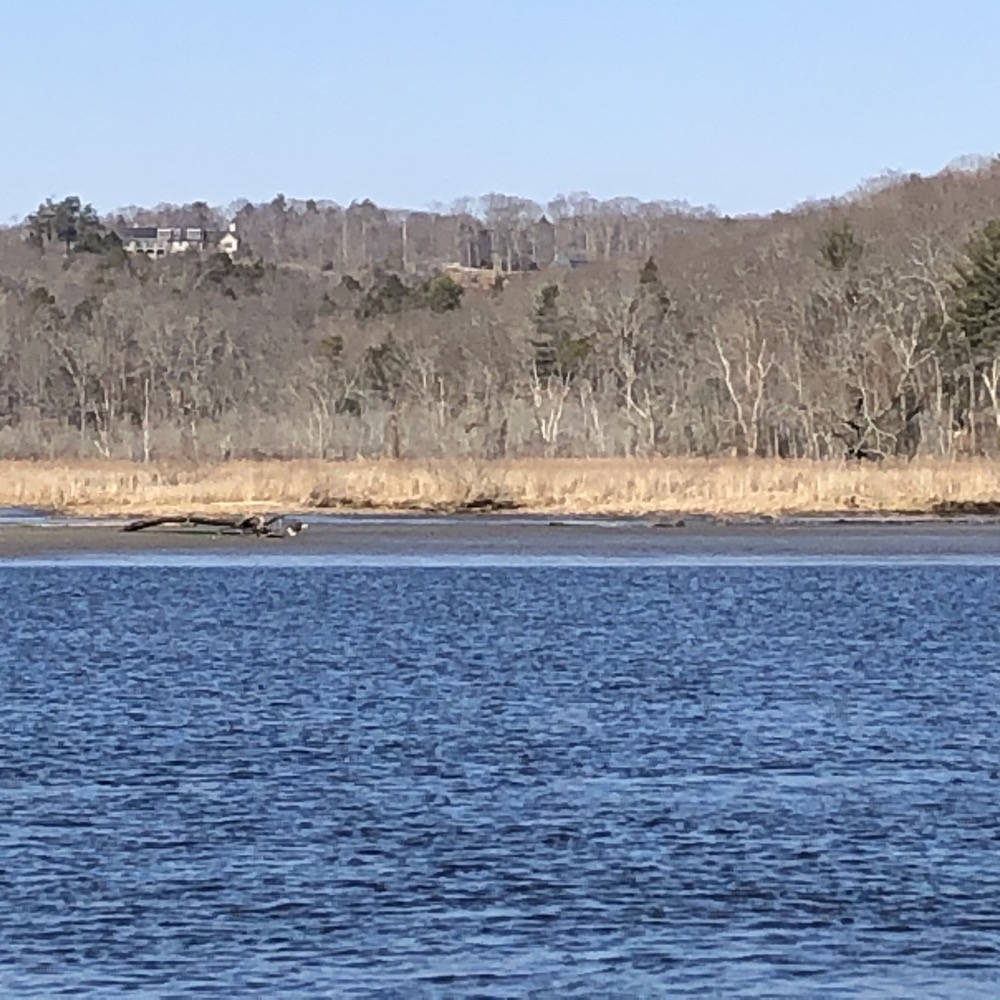 Oh it’s there. I promise.

Wow. We were told that very few cruises get to see that sort of action, especially just 30 feet off the bow. Even better? The regal eagle began eviscerating the fish for all of us to witness. Powerful stuff.

Selden Island used to have an active granite quarry and is now a state park. And you can camp there at one of its four primitive campsites for five bucks a night. We saw a couple more eagles, possibly eagle-eyeing their buddy on the beach with the big fish lunch. As the boat turned around, Calvin and I spent some time in the heated cabin area of the boat and I had a cup of the complimentary coffee.

It was then that I learned the only bad thing about RiverQuest eagle cruises. Stick with the tea or hot chocolate. Oof. 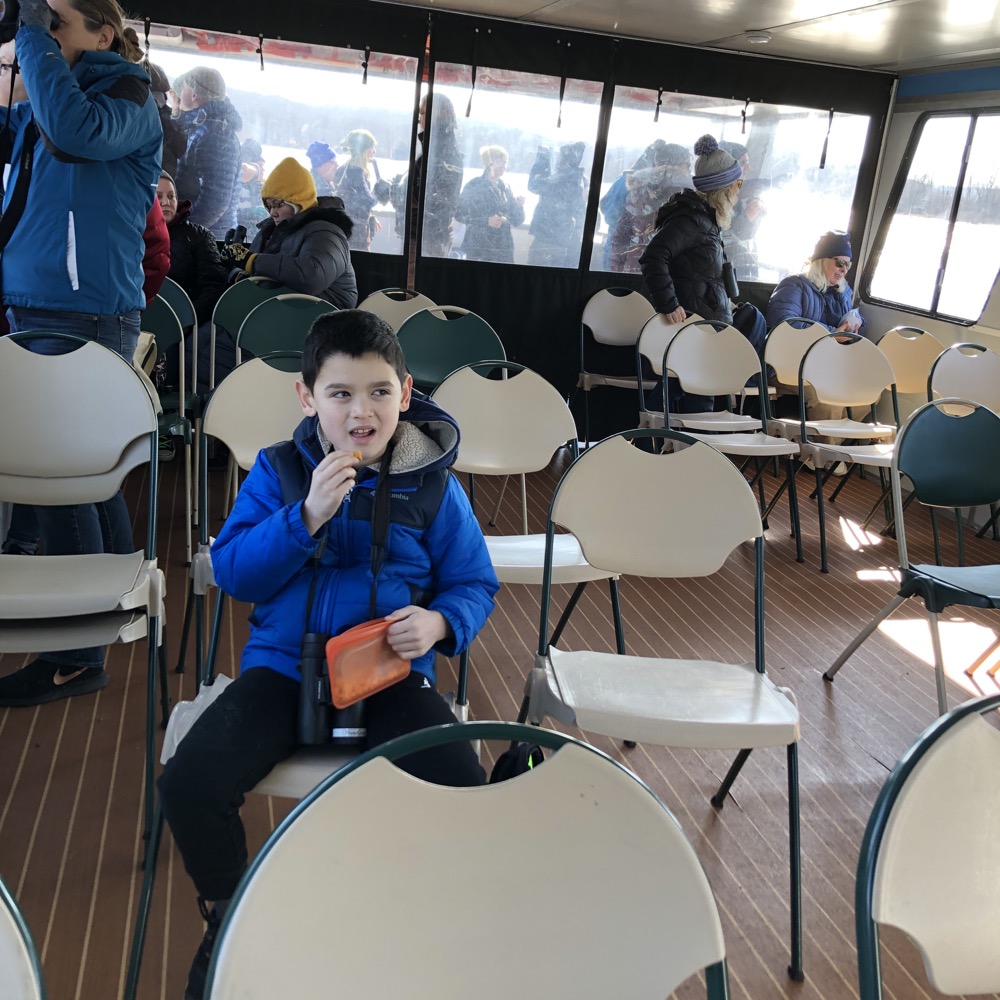 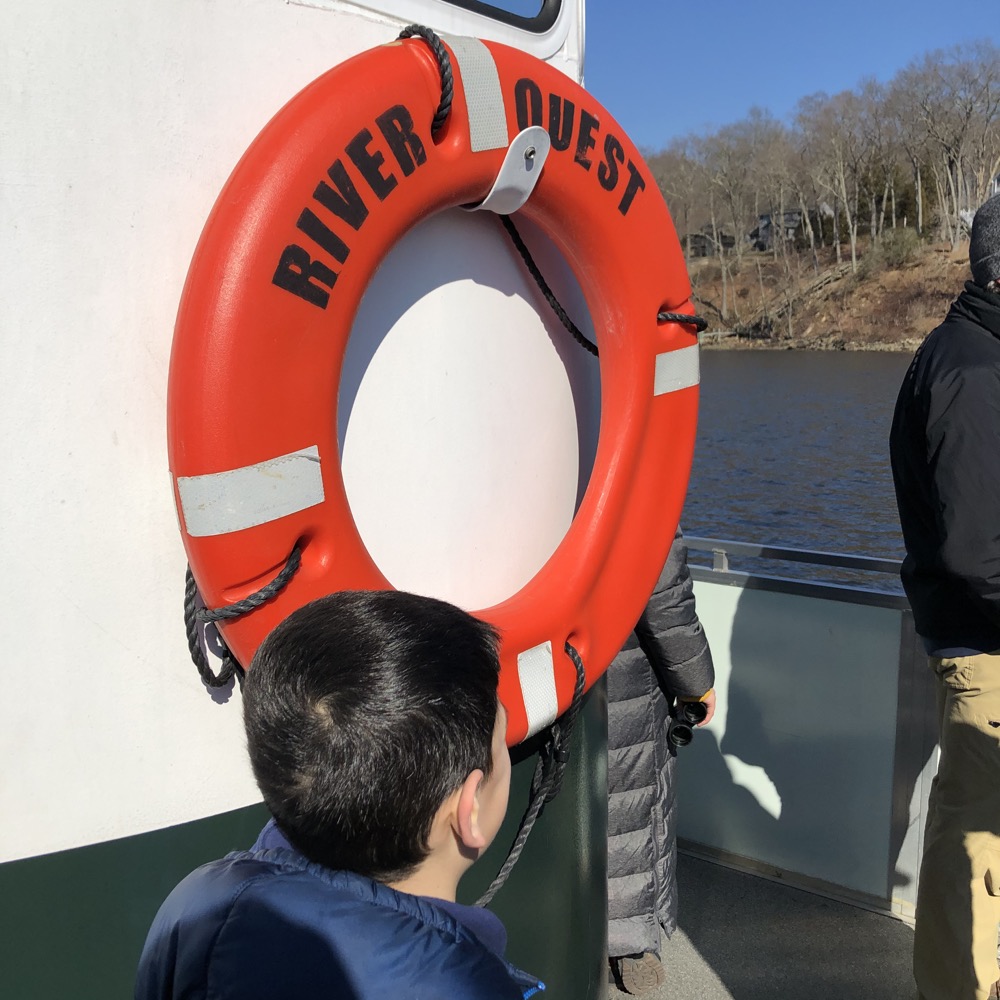 As we cruised back past the eating eagle and got an even closer view of it, I realized that I don’t think anyone could get seasick on this thing. RiverQuest offers an incredibly smooth ride. It’s a twin-hulled catamaran and it runs really quietly. There’s a restroom on board and the engines are claimed to be “green.”

We cruised past Brockway Island and I noticed that there’s a pretty nice house there. Curious about it, I looked it up and check this out. You can rent that house for a week! (And for a fraction of what a similarly sized house would cost you on the Cape or in southern Maine.) Oh, and it comes with a bald eagle nest! 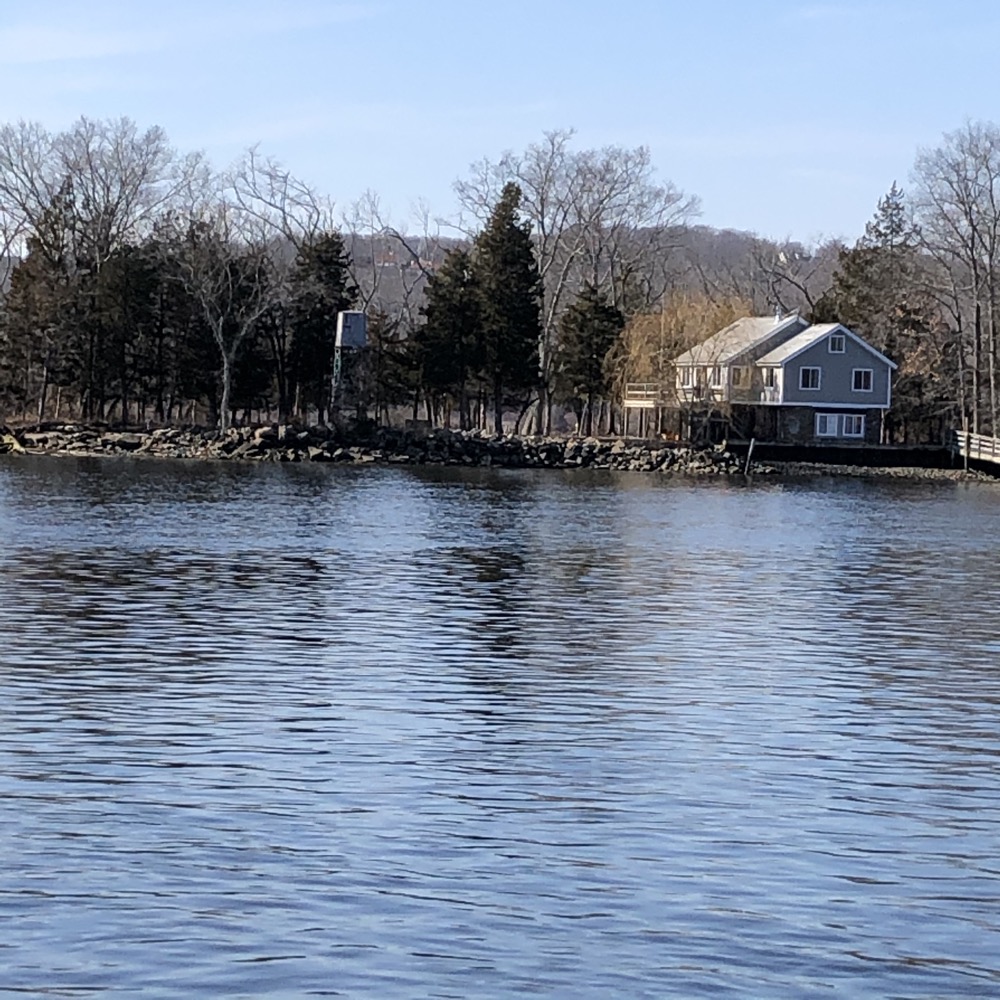 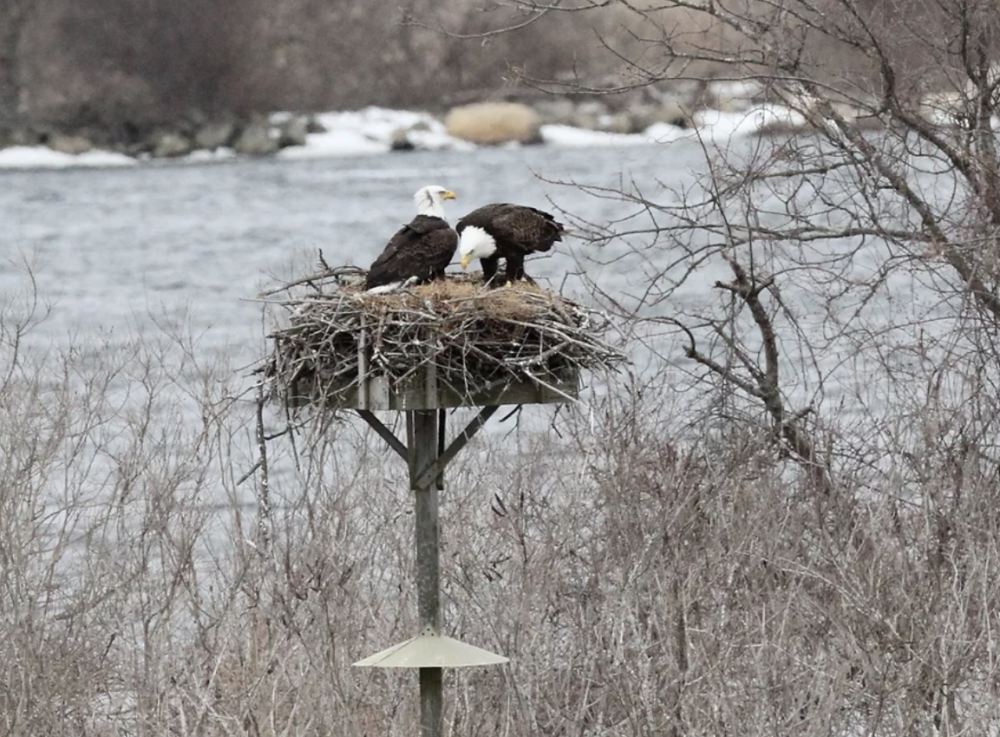 I would totally rent that place, but I’m not sure anyone else in my family would be game. (I’m pleased to report that in February 2022, rentals have been filled up for the entire year already. Good for the owners taking the chance.)

The entire trip was about two hours, with some time for the preamble at the museum. A museum which, as I said, we could check out after the cruise. I’ve been to the Connecticut River Museum as much as any museum in the state, but the model trains in the winter are always fun. 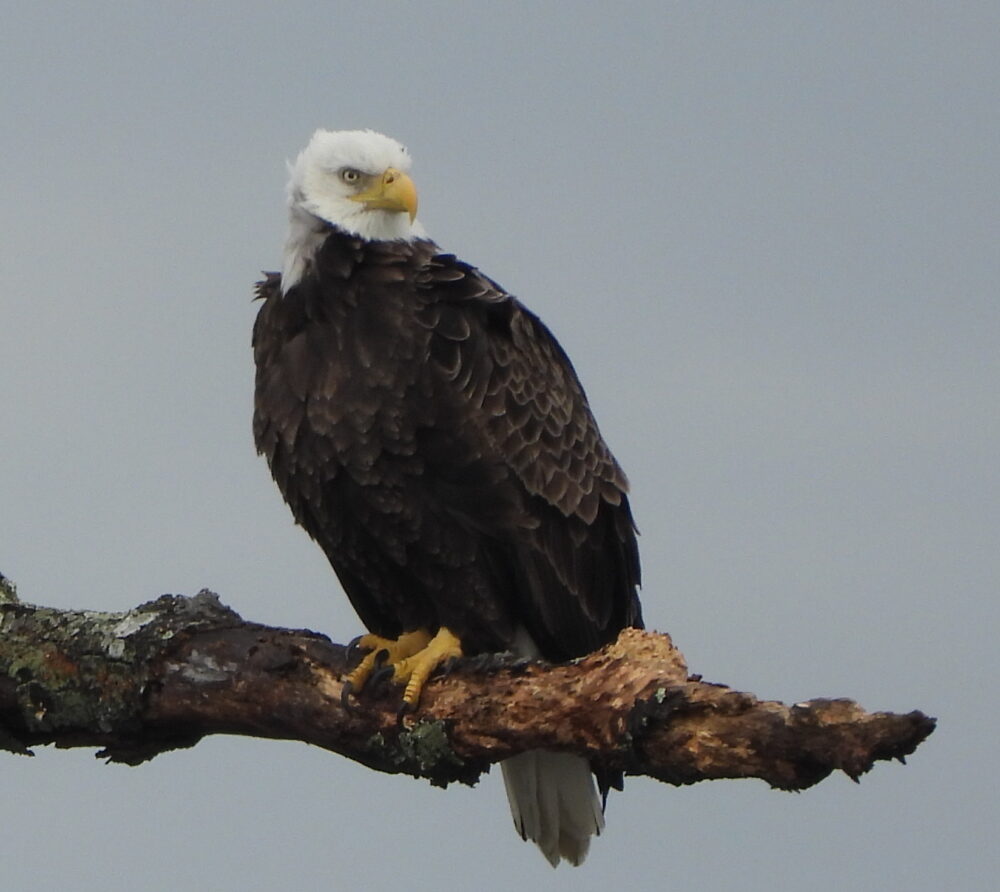 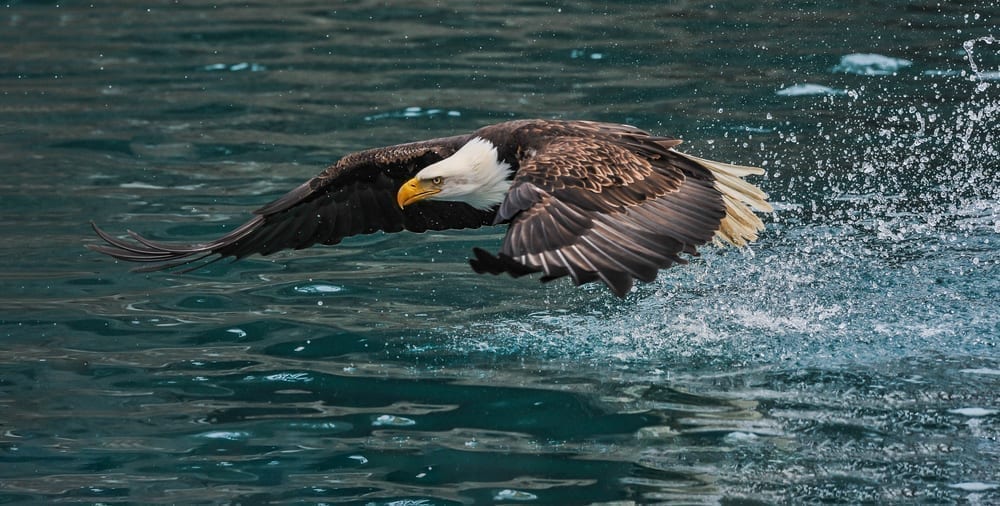 Yeah, these aren’t my pictures.

I taught Calvin all about The Turtle and David Bushnell and how it was used to try to bomb a British ship. This was also where I saw pictures and some information from the book, The Connecticut River From the Air, prompting me to seek it out and read it.

The museum is always fantastic of course, and the RiverQuest cruise was a great experience. I see bald eagles now near where I live in suburban West Hartford, but that doesn’t diminish the excitement of seeing them hunting and soaring above the Connecticut. And if sub-freezing boat trips aren’t your bag, RiverQuest does year-round cruises for other birds and things that I’m sure are just as good.

I highly recommend you check them out. 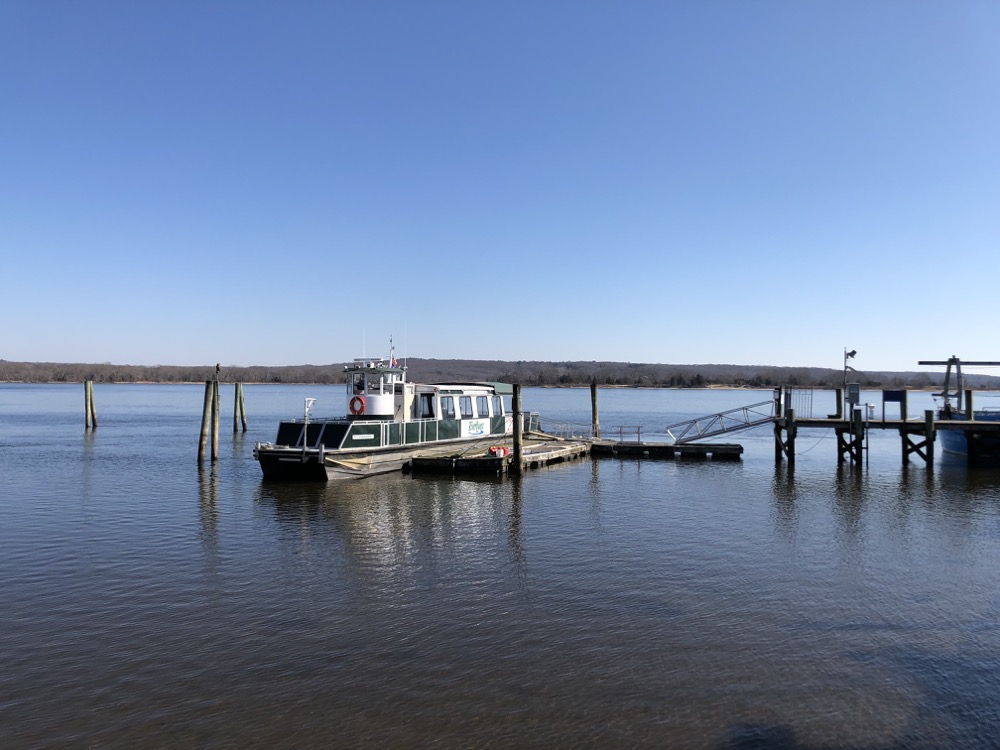 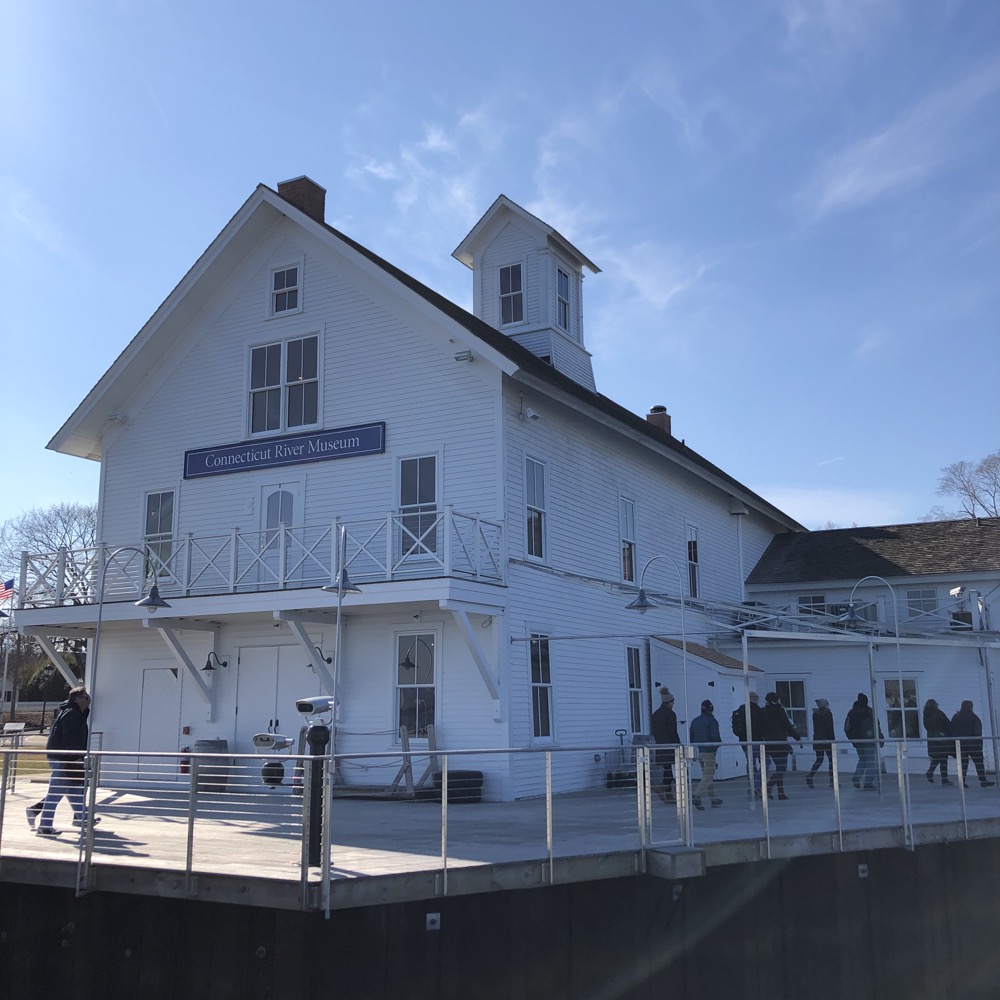