When all is said and done with regards to CTMQ, and I’m rocking in my chair telling the youngins about my decades-long project to do everything in Connecticut and one scamp asks me, “what do you remember most about Wolcott?” I think I might say, “the trail around Scoville Reservoir.”

Or, “the walk around Woodtick Reservoir. Or Wolcott Reservoir? Around Mill Pond? On Mill Pond Way? I don’t know, young man, that 3.5 mile walk around that large body of water in the middle of the town.” 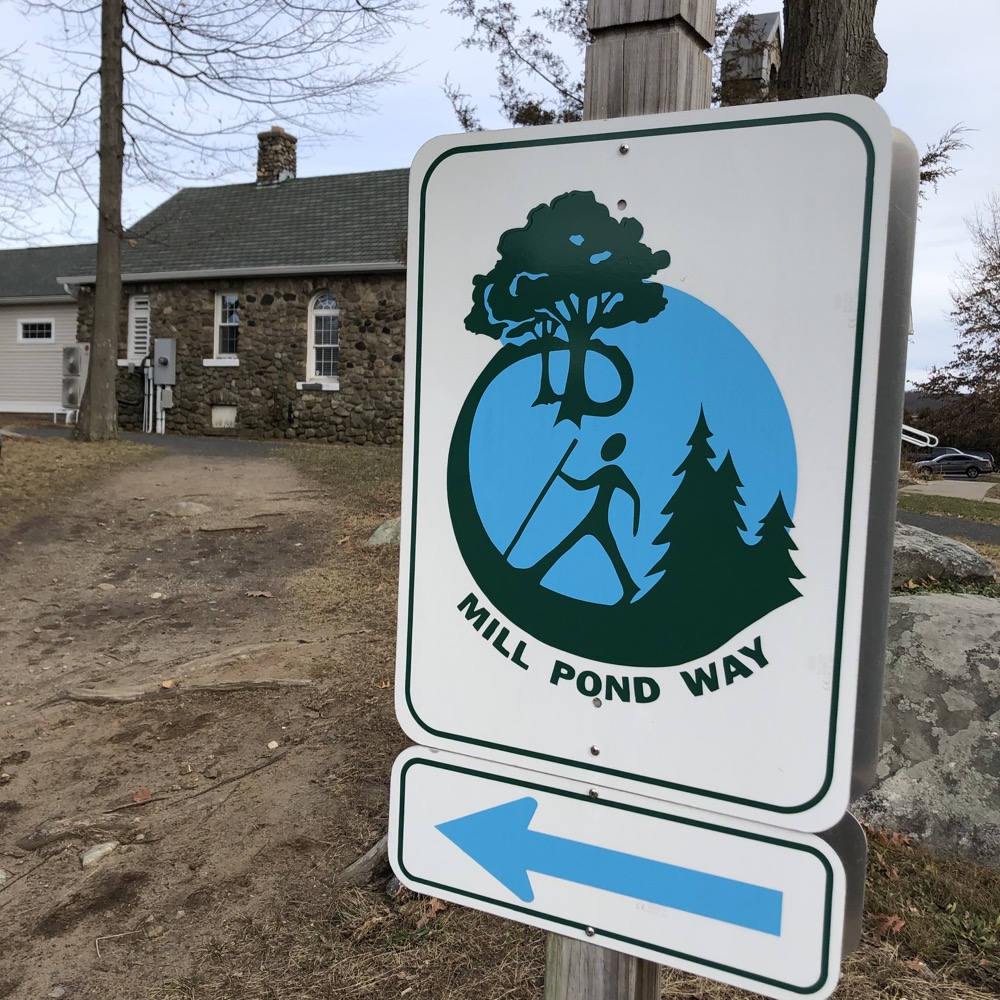 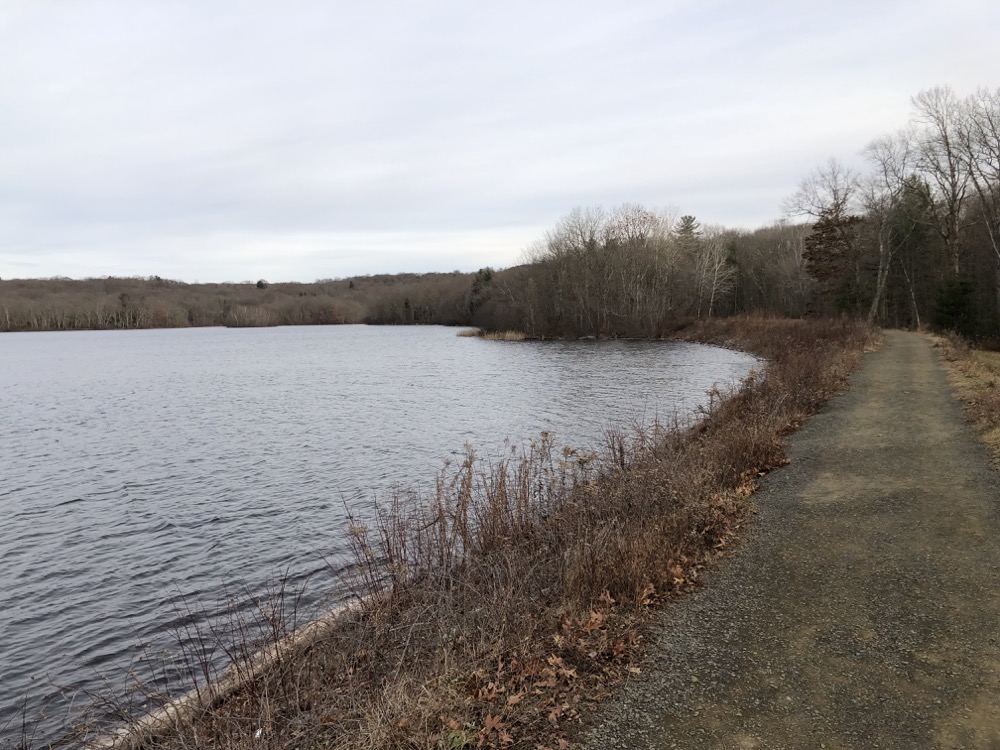 (In truth, my future self will probably most remember that Wolcott was Donald Trump’s number one per capita town in his 2020 reelection bid, but that’s not germane to CTMQ, so let’s let that go.)

The Woodtick Reservoir, often referred to as Scovill’s Reservoir, is a large man-made pond covering approximately 121 acres. It was constructed in 1917 and was originally associated with the prominent Scovill Manufacturing Company, which needed large amounts of water to produce brass. 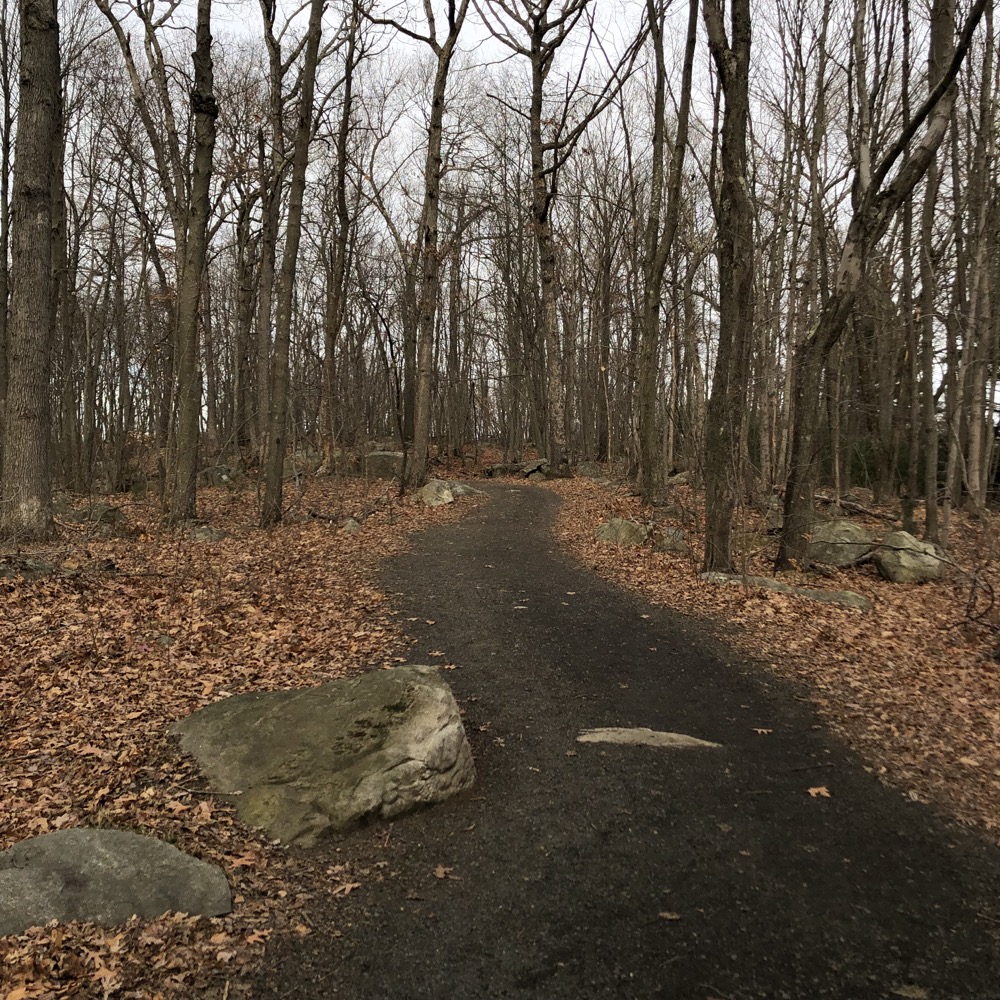 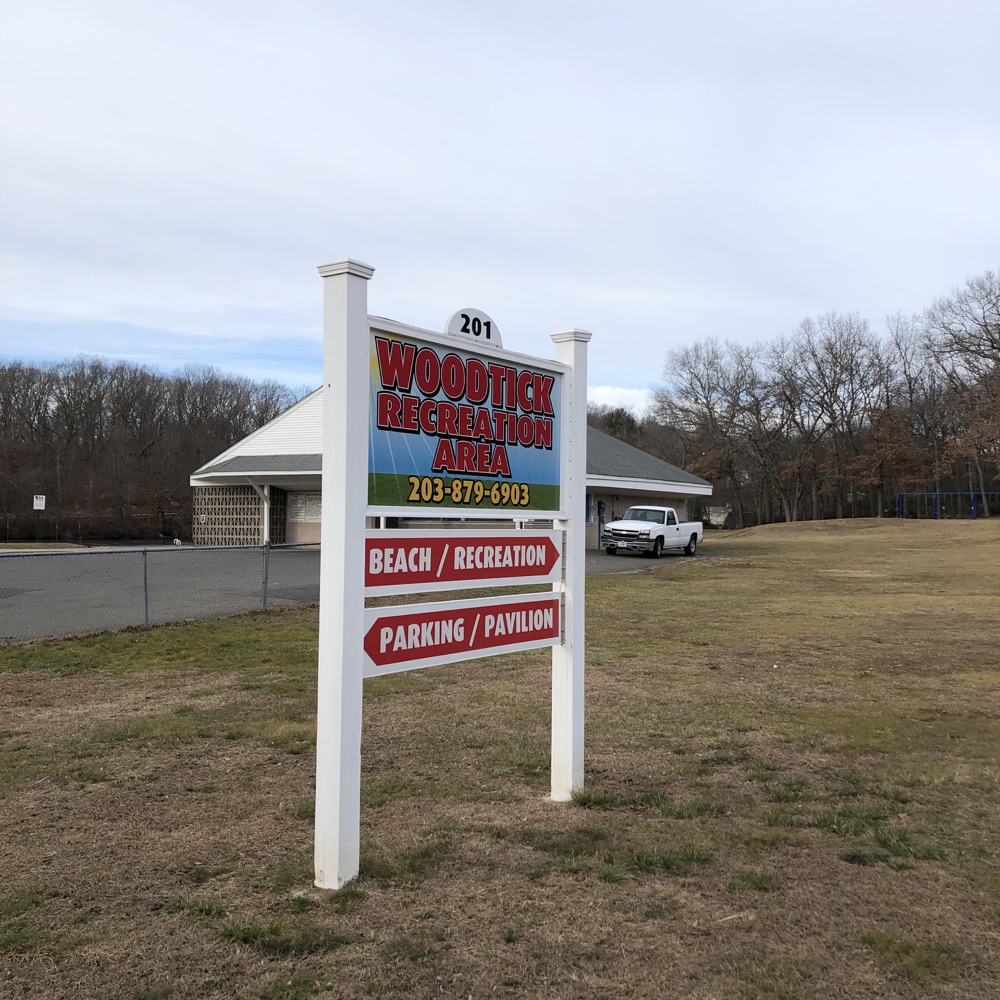 That’s cool and all but… now it’s “Scovill’s” Reservoir? Without an ‘e’? (That blurb is from the town of Wolcott’s website, and… they’re right. Scovill was founded in Waterbury as a button and sewing hardware factory. The Company developed the United States’ first gilt buttons, closely followed by the invention of new brass-making methods. Scoville went on to get government contracts for US Army and Navy pewter shank uniform buttons which adorned the uniforms of soldiers in the War of 1812.

The company still exists today as Morito Scovill Americas and still make all types of fasteners – though not in Waterbury anymore, of course. Yes, this confusion bothers me. Fortunately, the trail itself is straightforward, well built, and easy to follow. Around whatever darn reservoir.

There are about a dozen access points to the trail, and roads pretty much are always nearby. I chose to start at the southern end by parking in the huge lot across from the Woodtick Recreation Area next to the huge lot at the baseball complex. Oh, there’s an ET Progressive sign here! I crossed Nichols Road and began my counter-clockwise walk. Right here: 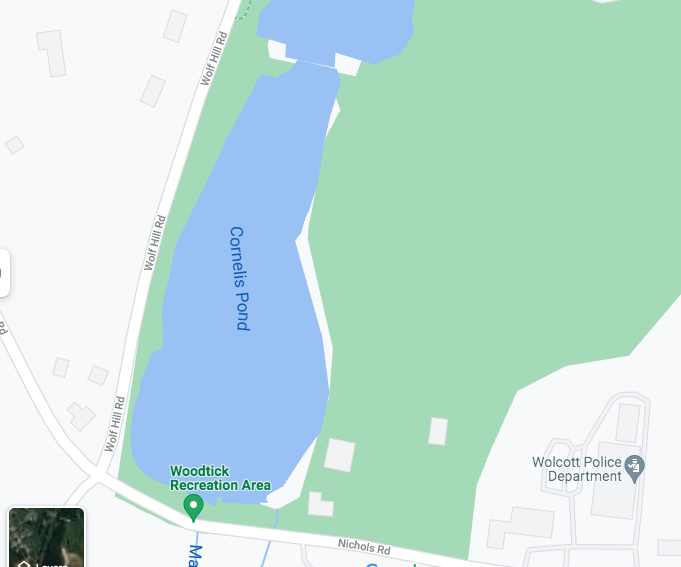 Conelis Pond?! What THE HECK IS CORNELIS POND?!

The Mad River Water Company began construction on the reservoir and dam in 1917. The reservoir covered approximately 330 acres of land and its water was used by the Scovill Manufacturing Company to produce brass. The lower dam was referred to as the Cornelis Dam and was made of masonry and earth. This sixty foot long dam consisted of double spillways; one arched and the other straight. Originally both spillways were arched. Construction of the upper dam caused the Mad River to flood the land and form the Woodtick Reservoir. 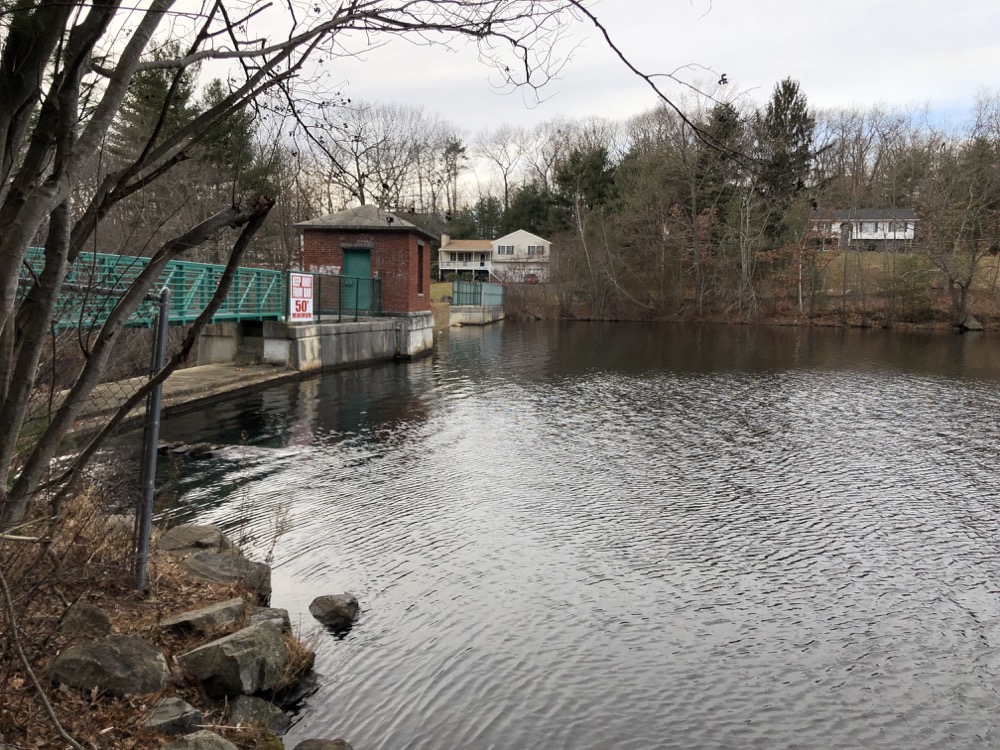 Wolcott, c’mon, you’re making me hate this place. (The above is from a Wolcott Historical Society page and I must say, they have produced some extraordinarily detailed accounts of pretty much everything that’s ever been in Wolcott. The link will certainly disappear and I won’t get back here to fix it until like 2034 probably, but if you’re reading this, google them. They are very impressive.)

After this page was published, my man on the ground in Wolcott added some to the story:

It’s always been ‘Scovill’… not ‘ScovillE’. The best I can tell, ‘Scoville’ was a misspelling that started at some point on the mistaken premise, apparently, that it referred to a village/town or something (like Plantsville or Plainville). But it was just the last name of the brass company founder (which did not have an ‘e’). Yet somehow the incorrect spelling has become almost more common than the correct spelling. 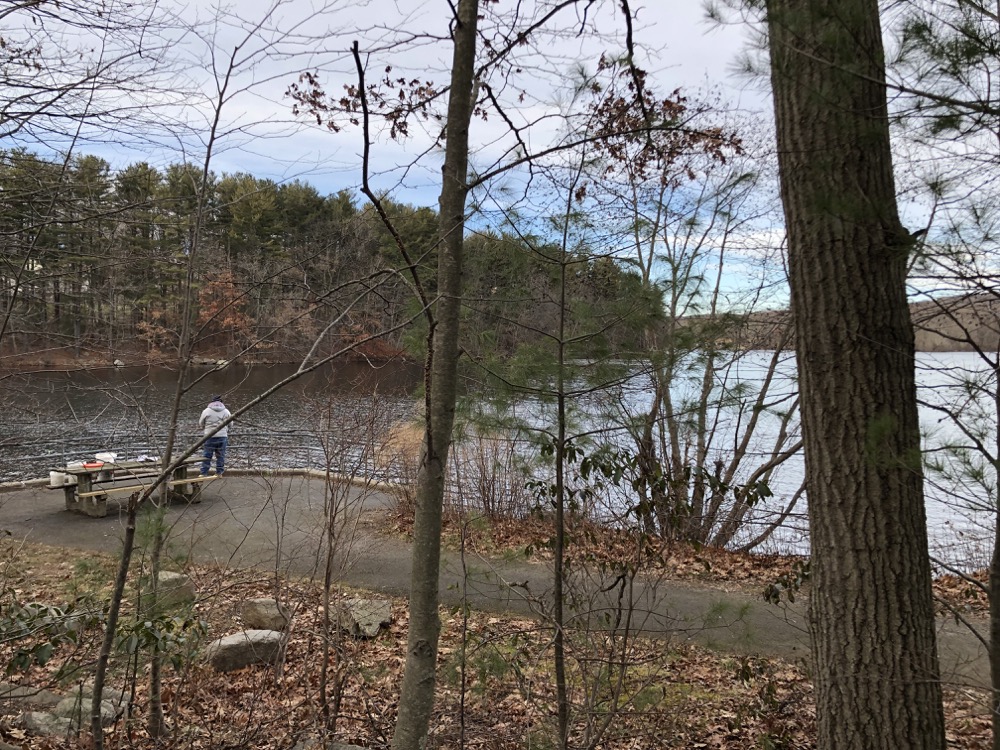 The section of Wolcott where the reservoir was created by damming Mad River was historically called Woodtick and the reservoir had always been called “Scovill’s Reservoir”. But after the brass factories shut down in late 70s, Scovill sold it to the town in the mid-80s and the town wanted to put its own spin on the lake, so it was renamed “Woodtick Reservoir”. That IS the official name now, even if it still hasn’t much caught on among the populace. It’s still called Scovill Reservoir more often than not.

The first bit of Mill Pond Way from the Woodtick Recreation Area is great. It’s a stone dust trail that winds through some interesting rock gardens and up past the dam. 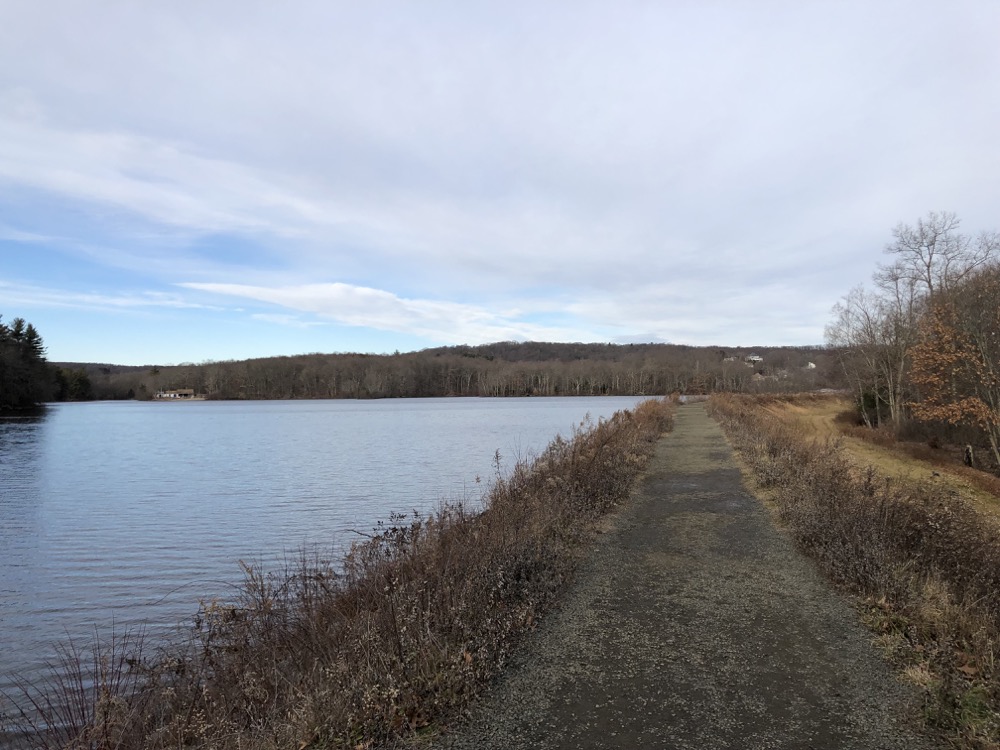 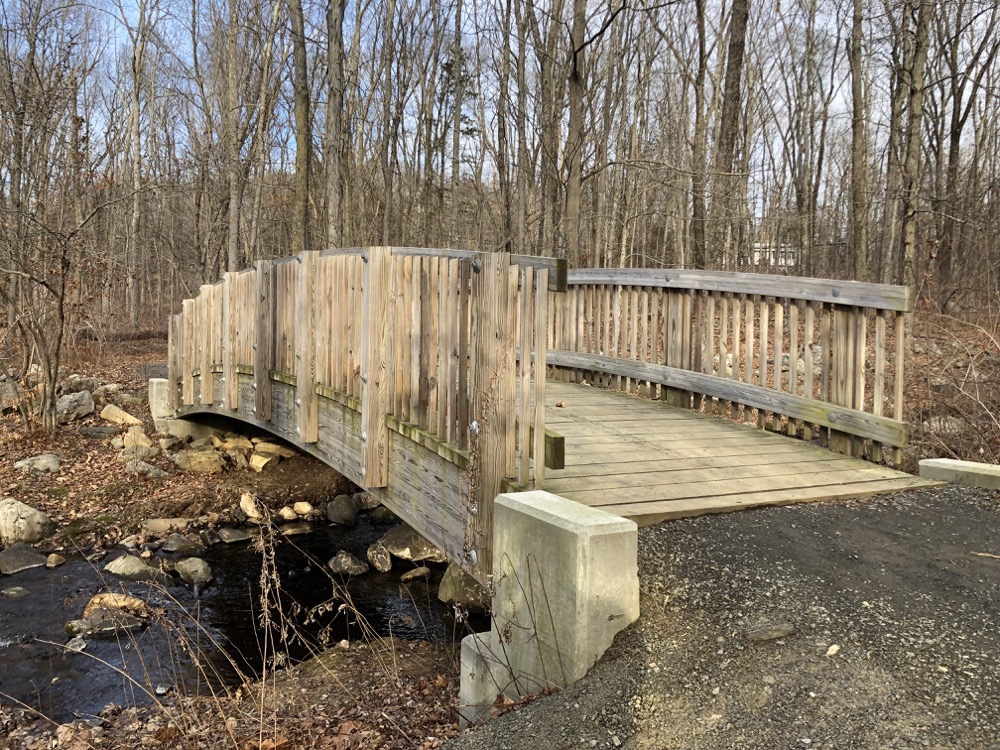 There’s not much of the dam to see from this side, so I continued north. Passing a fishing dock and another large parking area before walking across the exposed earthen dam. Hoo boy, the wind was whipping and it was pretty chilly.

A couple with a baby buggy approached (yes, you can feasibly push a rugged stroller most of the way around) and I thought, “holy cow, it’s a bit cold for that, and -” the stroller was for their little dog. I pretended that was normal and continued on, eager to get back into the woods for some wind protection. 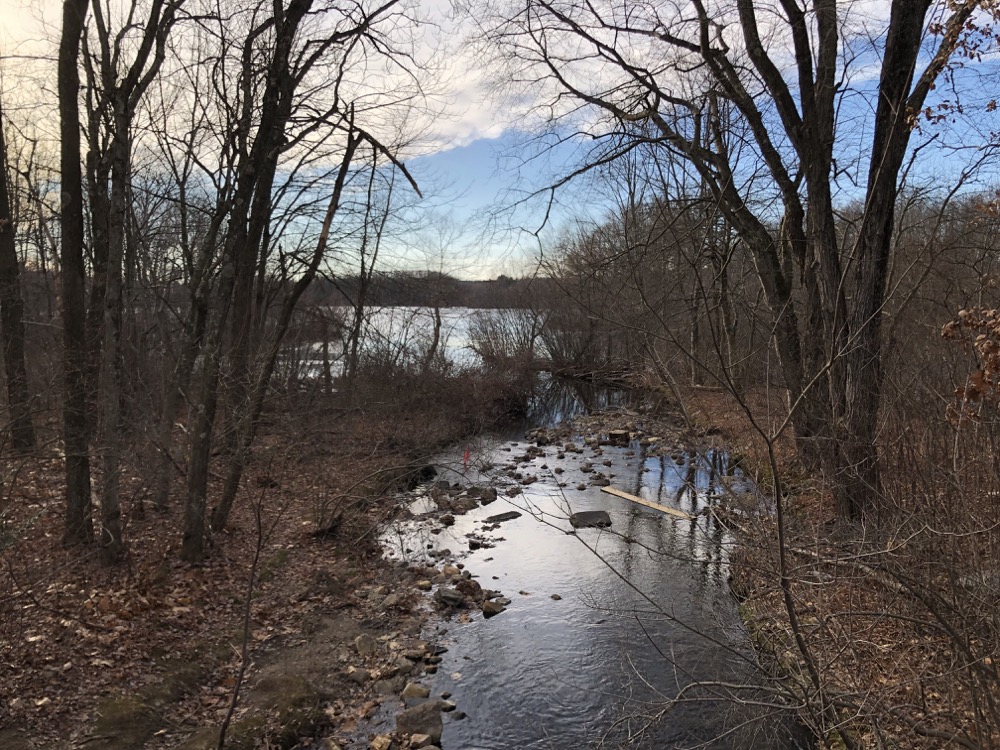 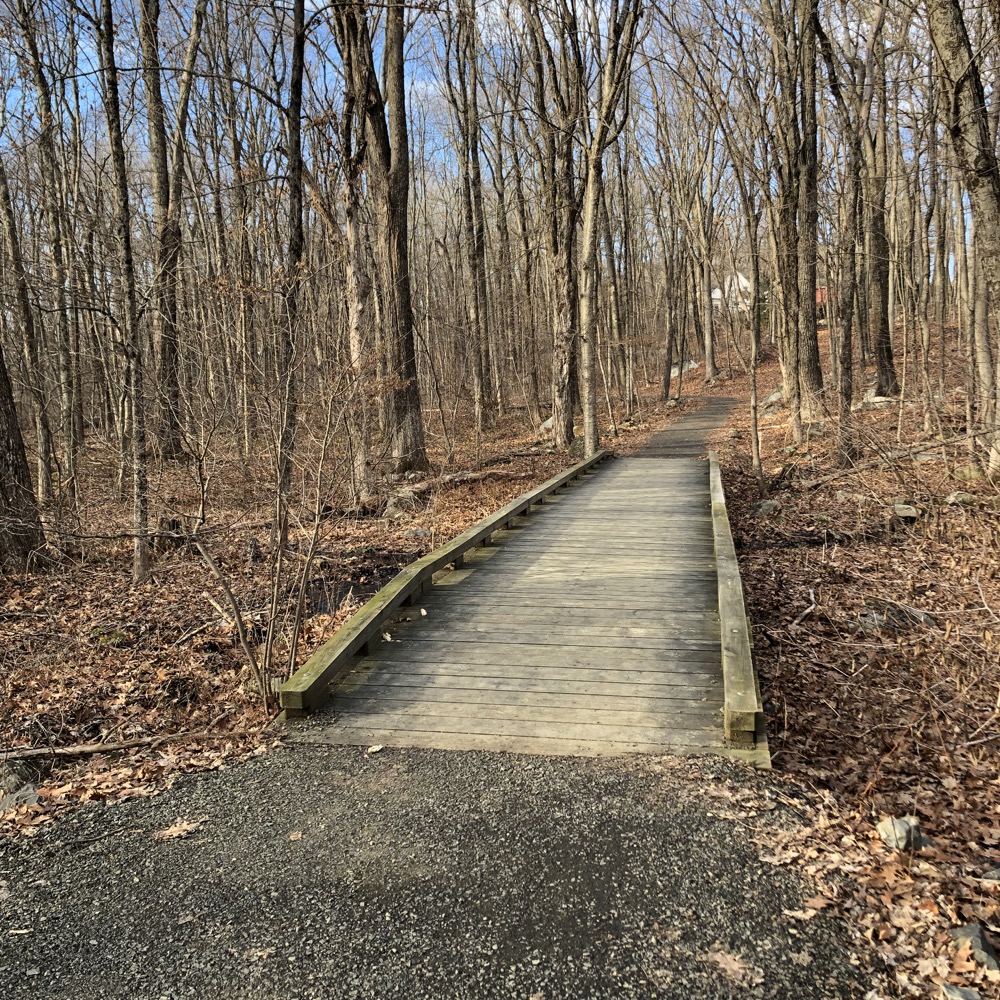 The eastern side of the reservoir approaches Woodtick Road. There’s a church there with parking and trail access as well. Once into the wood again, there are some boardwalks and very well-built bridges. I don’t know what I was expecting of this trail, but I don’t think it was such a high level of well-funded efforts.

The woods here are nice and as I curled around the northern end of the reservoir, I passed a couple more side trails to designated parking areas. The homes around here are quite large and loom on hills overlooking the water. At one point, a large white fence delineated the town’s woods and private property. Someone had smashed the fence, despite several signs warning of security cameras and such.

That didn’t stop someone from dumping… let’s take a closer look… someone trashed not one, but two … double-checking… two barber’s chairs. Here in the woods of Wolcott. Very odd. 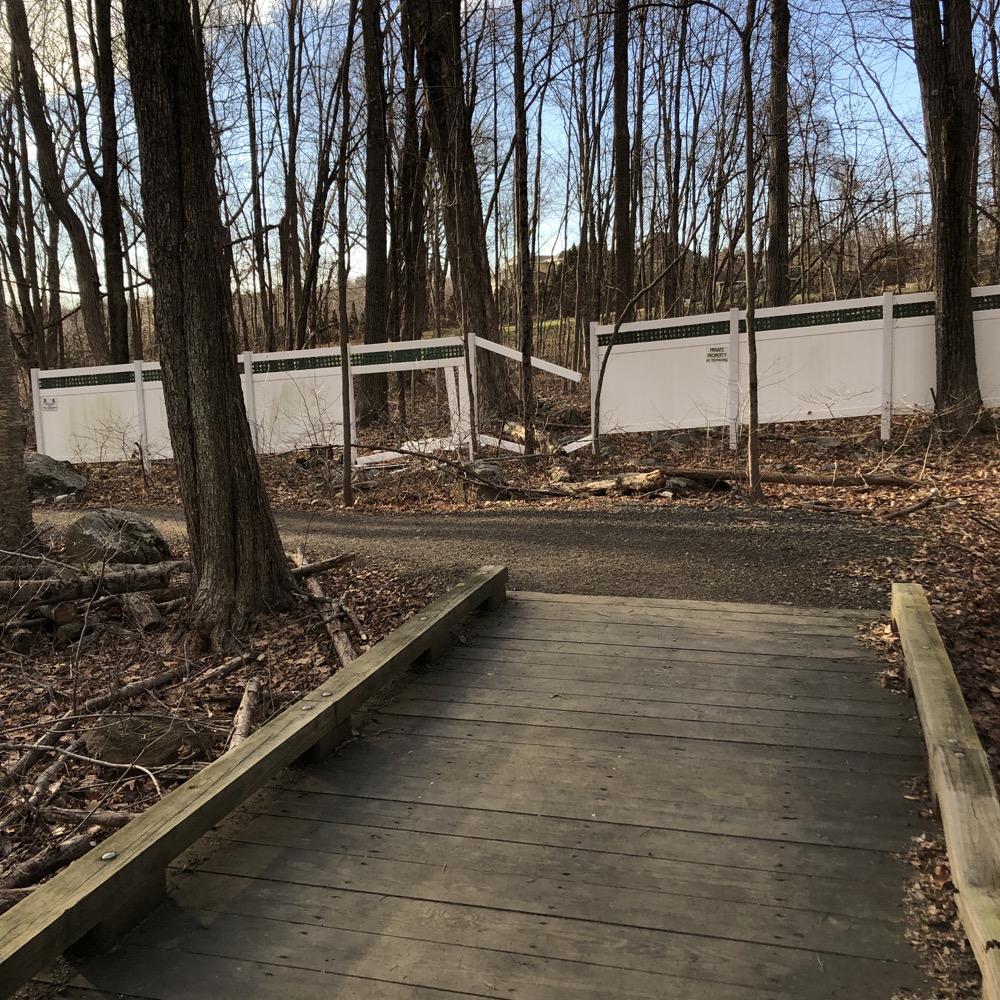 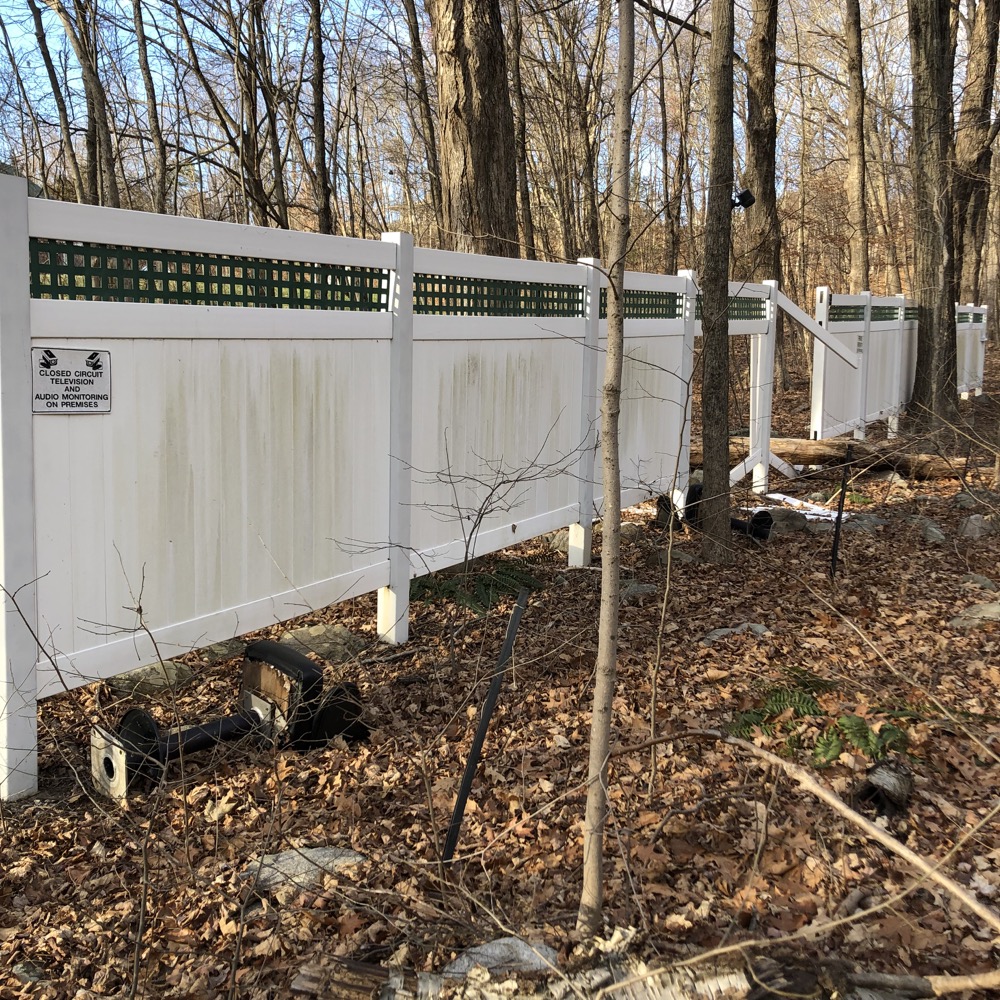 The white walls you saw out in the woods relate to a dispute in the town when the trail was being created (only about 4 or 5 years ago or so). When Wolcott purchased the reservoir, it apparently got a 50-foot margin of land around the water, as well. However, the town never really did much with that land for a couple decades, and except for a small section of trail built on one side of the lake, the rest of the margin was left wild. Some folks with lakefront property had become accustomed to basically having private lake access for many years and thought of the land down to the water as basically part of their backyard. So, when there was a renewed effort about 5 years ago to create a trail that circumnavigated the entire lake using that 50-foot margin, this meant that it would be cutting through adjacent to some folk’s backyards… and that private access to the water was going to become very public. A couple of lakefront residents were vehemently opposed and fought it hard. When the trail-building prevailed, one of them went so far as to put up those huge walls in the woods along the trail in protest. 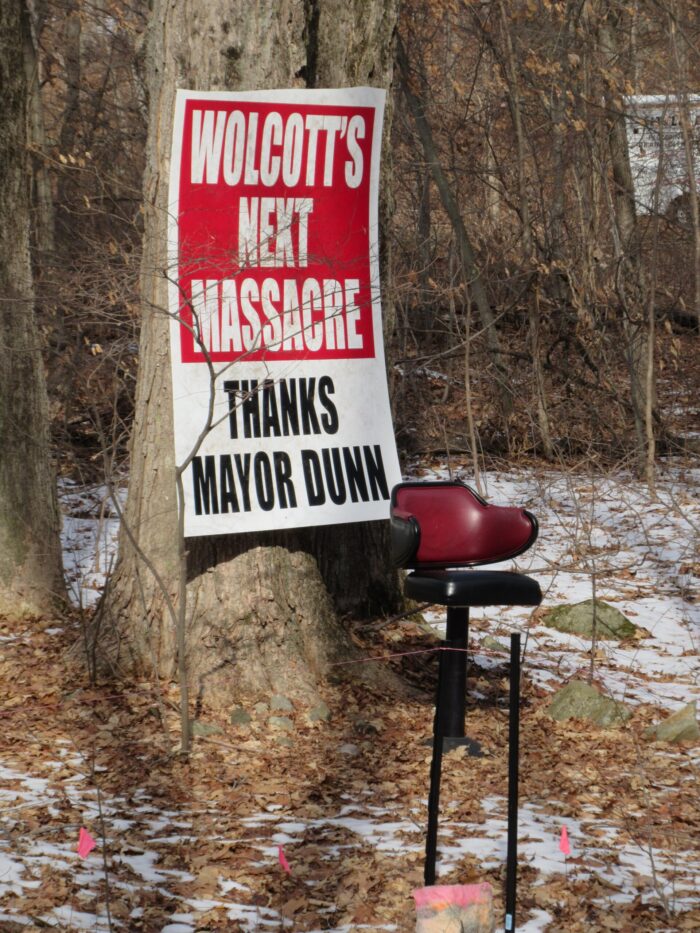 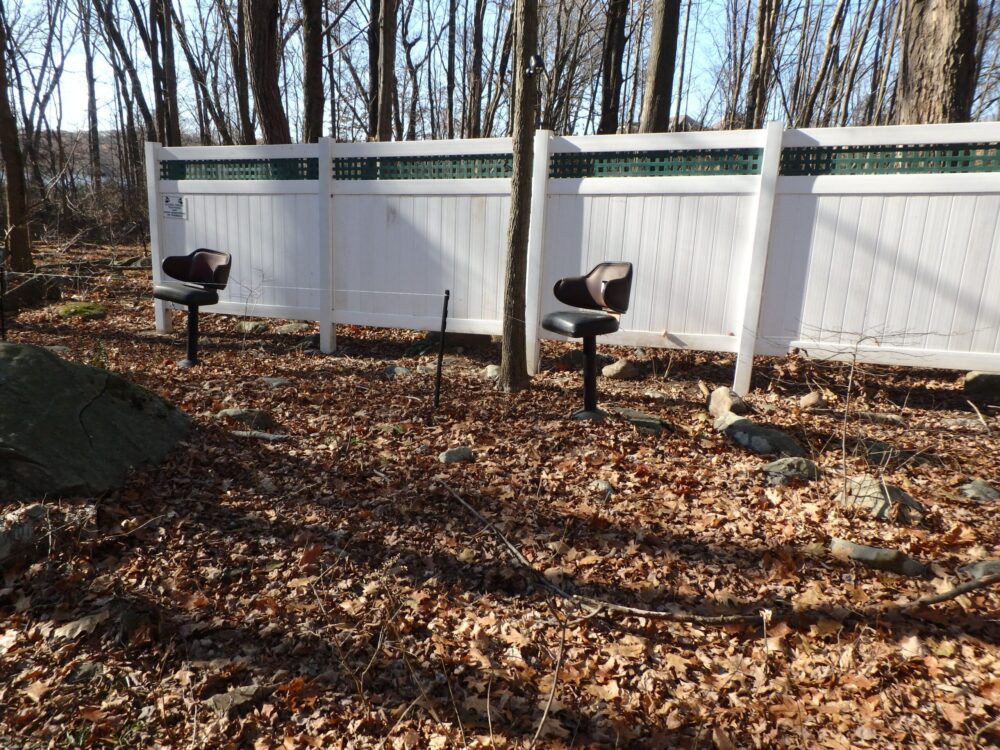 Apparently the chairs really mean something to the person who was really upset. These pictures are from another friend from an earlier hike.

The next half a mile or so is lovely. It feels remote and hidden away from the rest of Wolcott, as I crossed over long boardwalks and across a large spit of land. This whole trail really is a gem in a town often lumped in with Waterbury and Bristol – not that there’s anything wrong with either Waterbury or Bristol, but beautiful hikes are not the first thing that springs to mind with either.

After passing a Kiwanis camp and out to Munson Road, I walked past a couple more parking areas – again, this trail does not suffer for access points – the trail dipped in and out of the woods a couple times. Massive white pines, more bridges and boardwalks, and more views across the water. 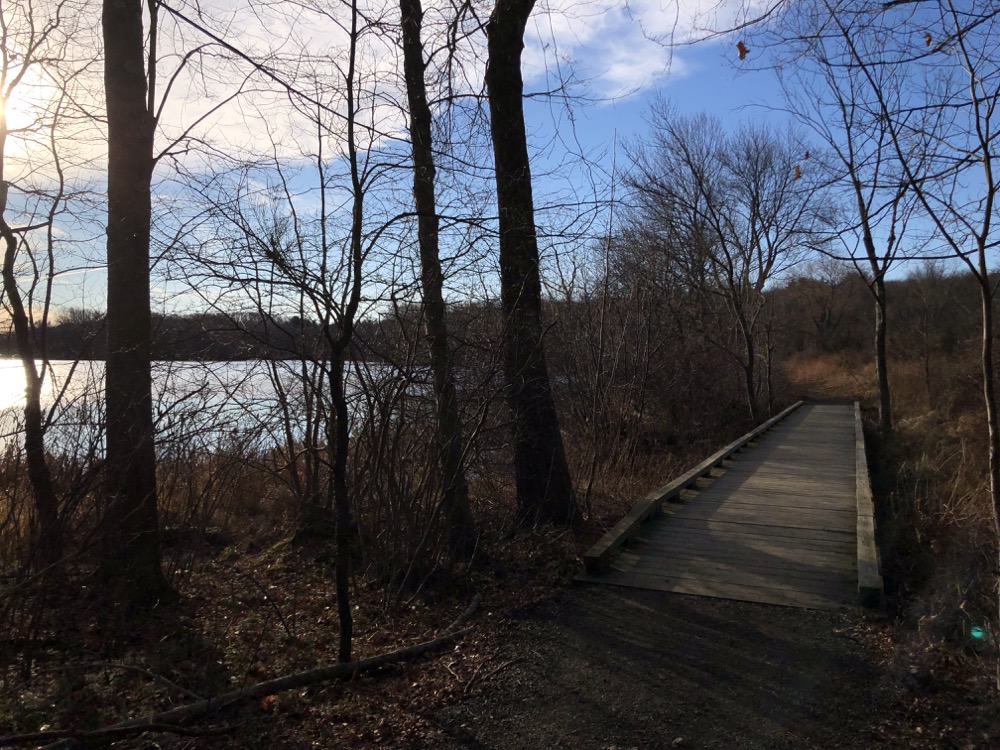 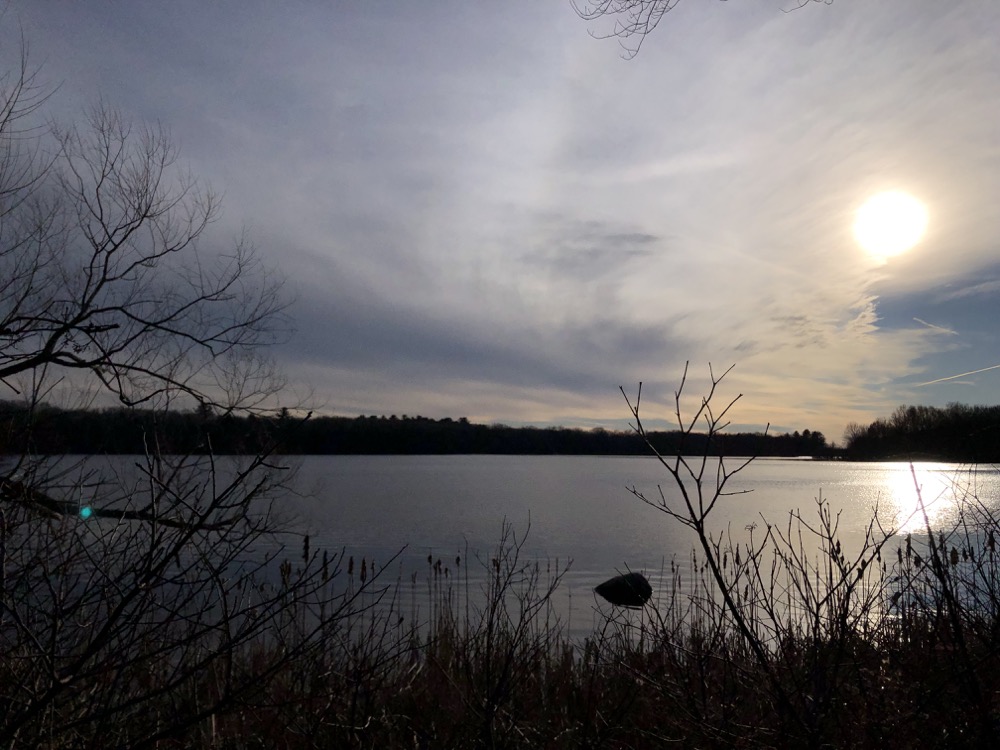 The rest of the trail, heading down the western side of the reservoir, is squeezed in between the water and Wolf Hill Road. It does the best job it can “hiding” in the trees away from the road, but there’s only so much land. Wolf Hill Road isn’t exactly a highway, so the trail still provides some remoteness and it’s clearly popular with locals; despite the cold, I still passed at least a dozen other people out for a walk.

I made my way back down to the dam. On this side of it, you can walk right down to the bottom of it and, I don’t know, look at it? It’s just a dam. 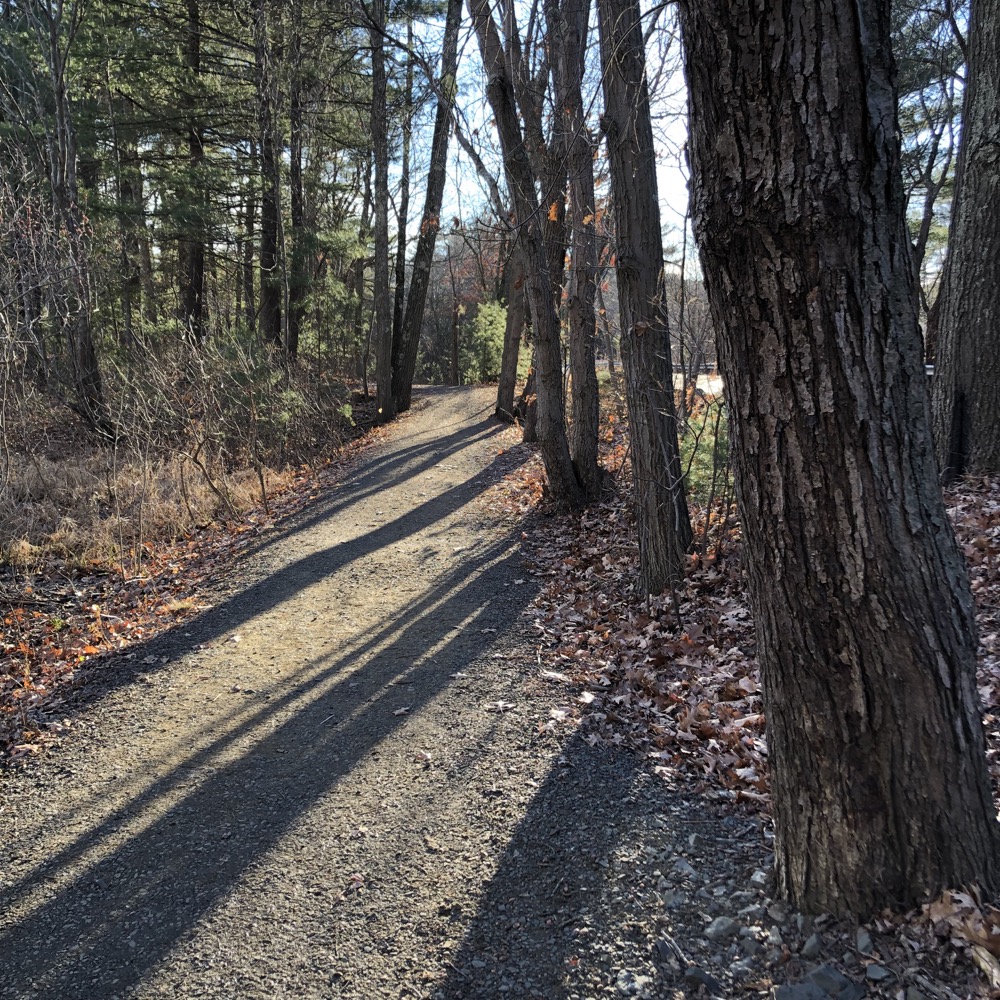 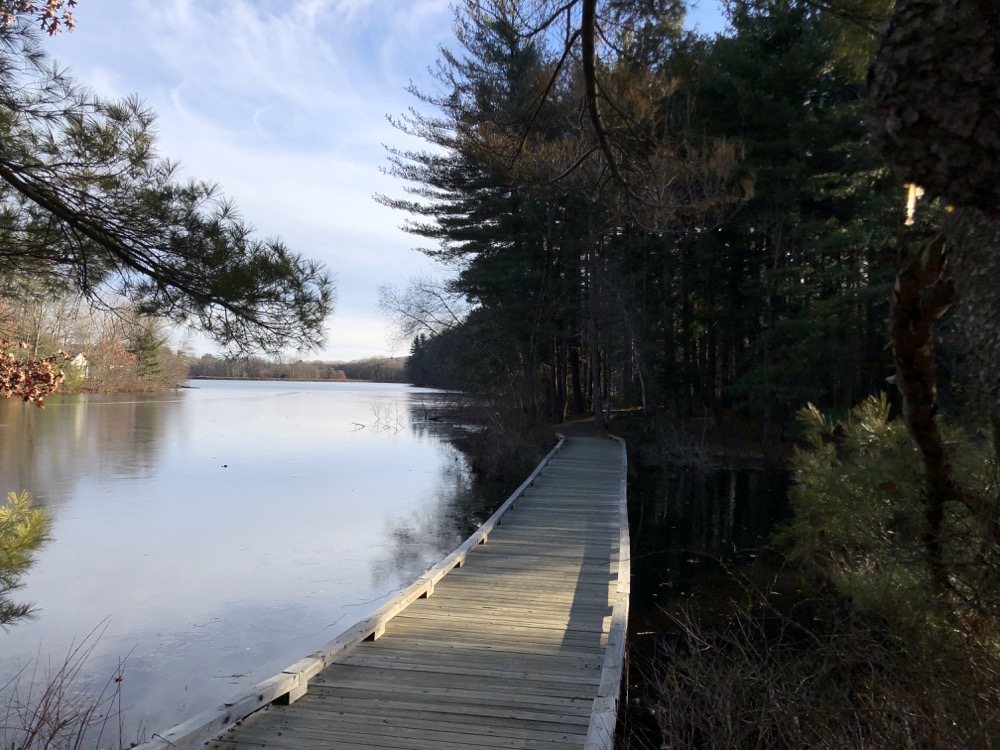 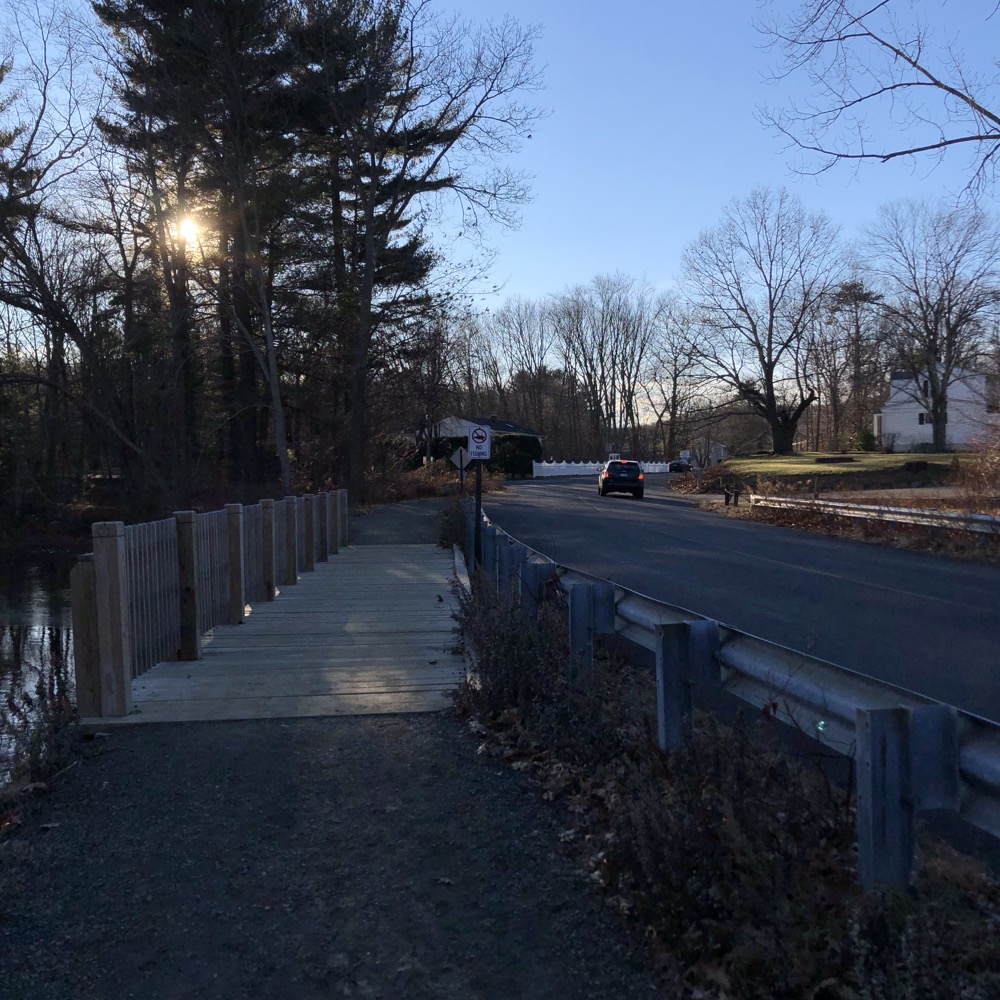 Yes, I walked down to the bottom of it and… just looked at it. I can confirm that yes, it’s literally just a dam.

From there the walk to my car across Nichols Road was only a few minutes. I looked at the beach at the recreation area and at the huge little league complex and realized that this place in July must be the place to be in Wolcott. It seems to have a Pollyanna quality about it. Baseball, hot dogs, swimming in a lake, canoeing, fishing… endless confusion and arguments over dumb things like place names.

This is the America, right here in Wolcott. 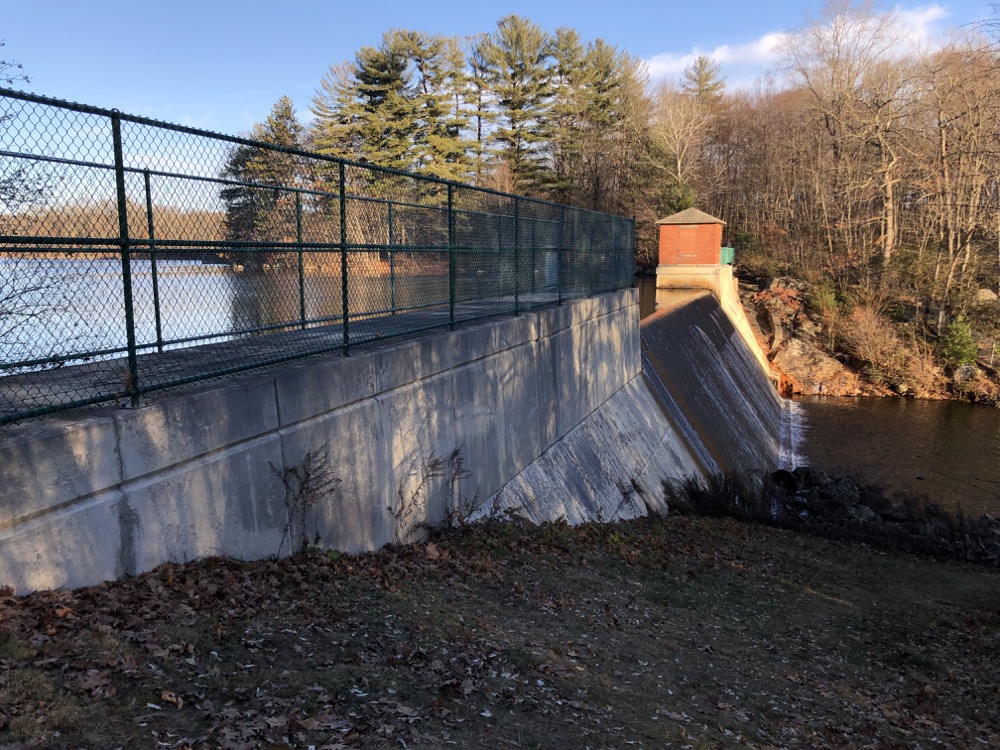 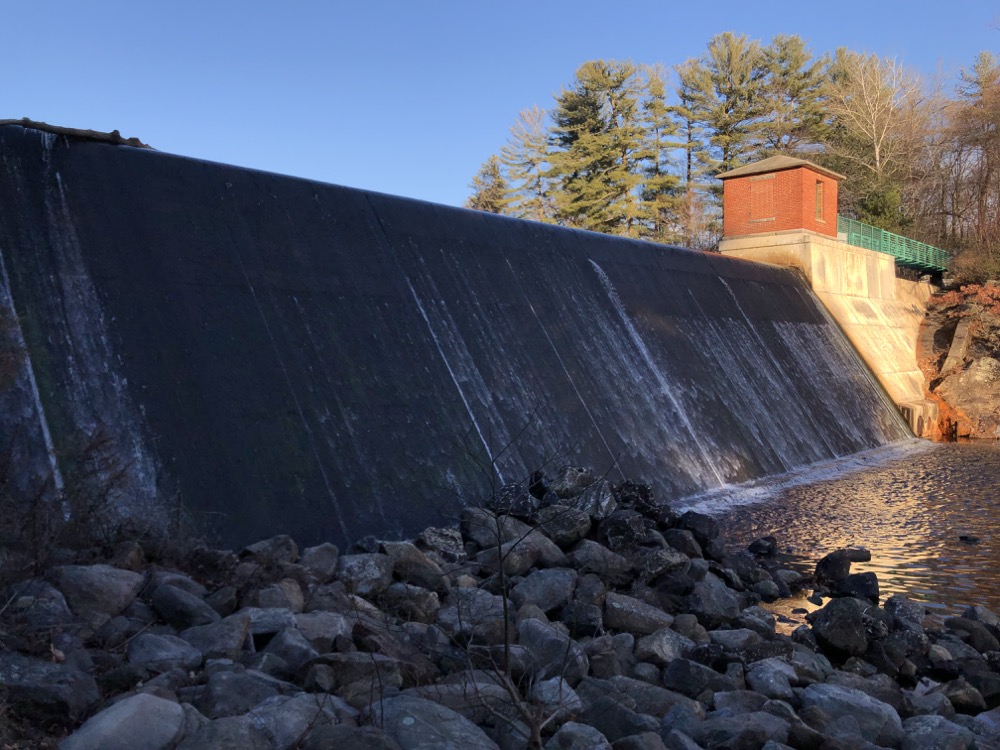 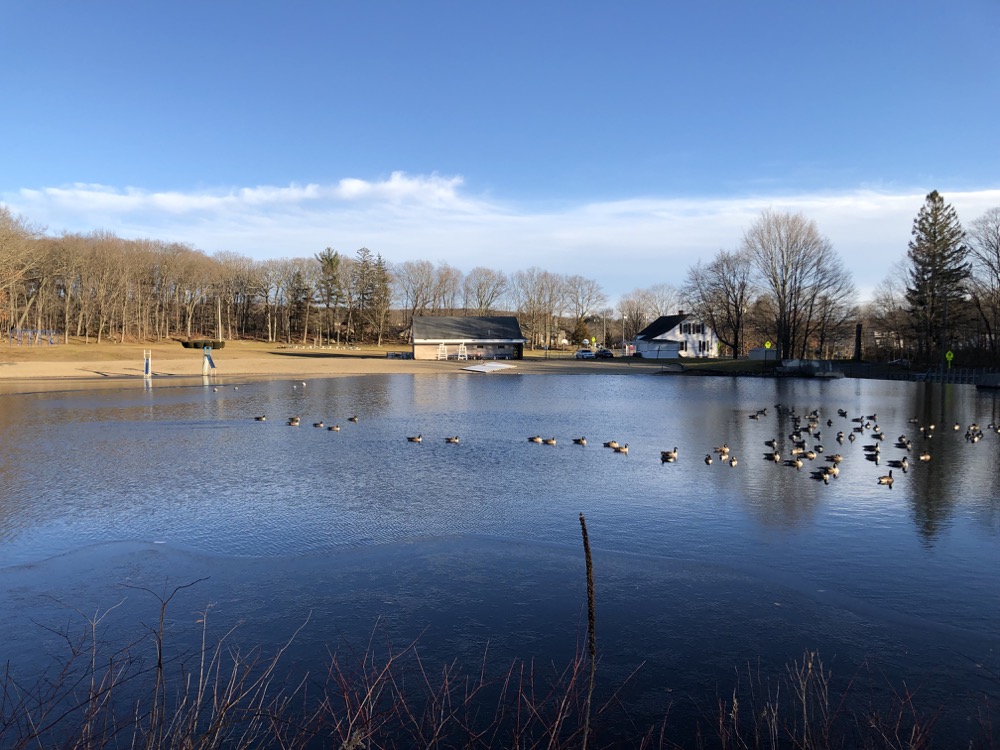