Since Connecticut’s cheese makers haven’t banded together yet to create the Connecticut Cheese Trail (a la the CT Wine Trail), I’m striking out on my own. And my first strike was at my alma mater: UConn. And the moderately famous Dairy Bar to be exact. 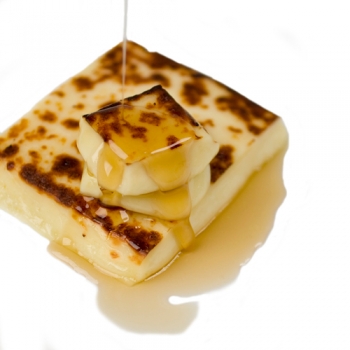 The Dairy Bar has been known for its incredible ice cream for decades. The cheese-making operation, however, just started in December 2007, so it’s younger than this website.

Cheese is made every other week, alternating with ice cream, and sold in the dairy bar. They use the milk from the dairy herd, pick it up from the Kellogg Dairy Center, and pasteurize it themselves. They began with un-aged cheese curd but quickly branched out to cheddars. The cheddars required aging (and now the customers were restless for more), so they found a cheese they could make that didn’t require any aging: Juustoleipa!

And unlike cheddar, Juustoleipa took me on a cheese tour of the Internet. Note: I didn’t do this until AFTER eating the cheese.

Pronounced HOO-stah-lee-pah or you-stoy-lay-PA, its name means “bread cheese” in Finnish. Juustoleipa has been produced for more than 200 years in northern Finland and Sweden, originally from reindeer milk! This cheese is unusual in that it is baked during the cheesemaking process. The heat from baking caramelizes the sugars on the outside of the cheese to form a tasty crust similar to brown bread. Juustoleipa is an important cheese in its homeland; crucial to holiday celebrations and even marriage traditions. Mothers of eligible women used to offer suitors a cup of coffee with the cheese and, if the man liked the cheese, he married the girl! 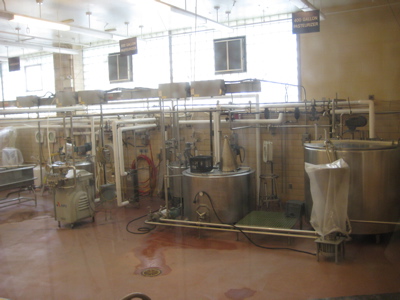 This cheese doesn’t melt, but can be warmed (put in the microwave for 10 or 20 seconds until it glistens). It has a sweet flavor, especially toward its brown crust where it has been caramelized. We recommend it served as a dessert with honey or lingonberry jam. For an unusual treat, try it dipped in hot coffee! 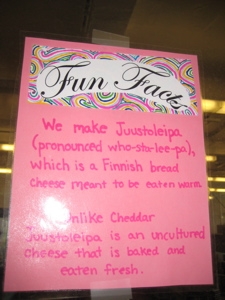 Oh those crazy Finns. But why an unknown Finnish cheese in Storrs, Connecticut?

“We have a large population of people from Finland living in Canterbury, and I’ve talked to friends who are quite excited about it,” the head of the creamery says. “It’s often eaten for breakfast with coffee, topped with syrup or jelly. It’s served warm and looks like toast.” 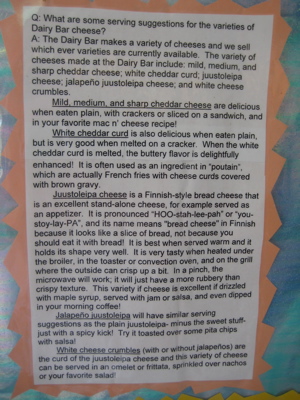 Okay, okay, I get it. Eat it warm with something sweet. (That quote was from this UConn Advance article.) Finnish people in Canterbury? You betcha. In fact, I’ve visited the Finnish-American Heritage Museum out there.

Let’s learn how they make it from cheese.com:

This cheese is considered as the specialty of Finland and Lapland. It is a round cheese of various sizes made from cow’s or reindeer’s milk. The production of this cheese is following: The curds are drained and pressed into a flat, wooden platter with a rim. Then it is placed in front of the fire until the outer layer is “toasted”. Then the cheese looks like bread and that’s why it got its name which means “cheese bread”. It is creamy and smooth under a crusty surface. The period of ripening is only a few days. Juustoleipa is usually served as a dessert with cream and cloudberry jam. 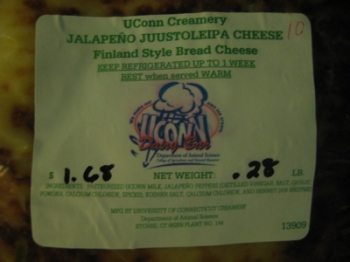 Cloudberry Jam? That sounds like a horrible Phish cover band or something those “Dragon Tales” dragons eat. So okay, it’s called “Bread Cheese” because it looks like a piece of bread, not because you should eat it with bread.

Like I said… I didn’t know that before Hoang and I ate it. The cheese is very cheap. I picked some up (with jalepenos in it) one afternoon after Damian and I explored the UConn Animal Barns. We were actually going to get some ice cream, but the line was 20 deep – on a random Friday in July. In STORRS. That’s how good their ice cream is. 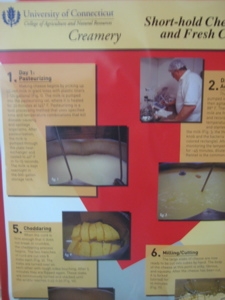 So, with Damian getting fussy, I just purchased the cheese and hit the road.

I figured that the “bread cheese” would be good on bread so I heated it up on a piece of bread in the toaster oven. Hoang and I enjoyed a couple pieces as a stand alone snack and I really liked it. Very mild, and slightly creamy. One issue is that it squeaks between your teeth when you eat it (It is also known as “squeaky cheese”) which I think drove Hoang slightly mad. It’s simply impossible to avoid the squeak. 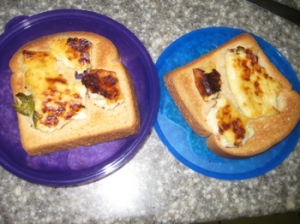 The cheese on toast was actually pretty good, but sort of an odd snack and certainly not the proper way to enjoy juustoleipa. As if to rub it in my face one more time, here’s what UConn’s own site has to say about it:

Its name means “bread cheese” in Finnish because it looks like a slice of bread, not because you should eat it with bread! It is best when served warm and it holds its shape very well. This variety if cheese is excellent if drizzled with maple syrup, served with jam or salsa, and even dipped in your morning coffee! 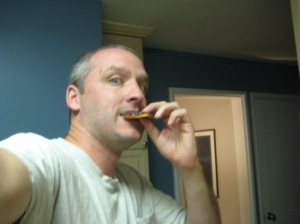