To me, the story here isn’t so much the Porter house, but the road up to it. Holy cow. I have no idea how the people that live up here drive anywhere during any snow or ice accumulation. There’s just no possible way. The road up to the Porter house on the dead-ended Spruce Street is impossibly steep. So steep, I had to ascend it in 2nd gear and was fearful the ol’ Outback was going to putt out if I didn’t downshift to 1st! And going down the hill, Spruce Street comes to a T intersection with a busy road, so… I must come back here next winter to see it all go down. I’m sure it’s very exciting at the bottom of that hill. 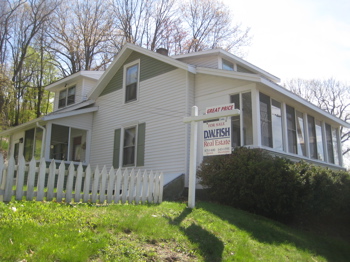 Anyway, at the top of the hill is the former home of Charles Ethan Porter. Charles Ethan Porter (1847-1923) was a 19th century African-American still-life artist most famous for his portraits of fruit and floral still-life studies. Porter was born in Hartford and moved with his family to Rockville (now part of Vernon) in the 1850s. In 1869, after two years of study in Fine Art at Wesleyan Academy (now Wilbraham and Monson Academy) in Wilbraham, Massachusetts, Porter was accepted to the National Academy of Design in New York City. He may have been the first African American to study there and was among the first to exhibit at the school. Carrying with him a letter of recommendation from Mark Twain in 1881, Porter moved to France where he studied in prestigious Parisian art schools and painted in the surrounding countryside. 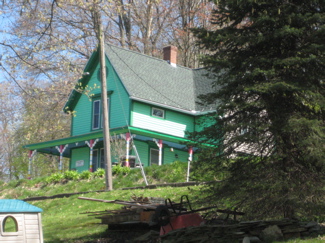 In later years, he had a studio near his Rockville home in the base of a tower, where he painted and taught lessons to local children. The studio stood at the site of the present Fox Hill Tower. Although his work declined in the early 1900s, Porter had made a successful life as an artist, boasting acclaim by art critics in Hartford, Rockville and New York City, and remembered today as a master of still life. This home is privately owned and not open to the public.

Next door to Porter’s house is a very brightly colored historic house that once belonged to Henry Vanness. One of Porter’s sisters, Mary, married Henry Vanness in 1865, a freight handler for the railroad who was eventually promoted to train conductor, a position he held for over forty years. He is believed to be the only black train conductor in the country at that time. I didn’t get a close up picture of his house because the owner was out doing yard work and eyed me wearily; probably because it’s the last house on a dead-end up an impossibly steep hill.

As of May 1st, 2011, the house is also for sale as you can see in the first picture. The tower referenced about is the beautiful stone tower on Fox Hill which is officially part of Henry Park. I visited the tower with Damian on the same day to add to my CTMQ Tower list, but it was unfortunately locked up tight. Regardless, here’s the view Porter had from the hill… With a lot more buildings today than 100+ years ago of course. 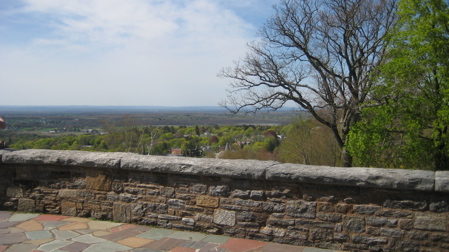 A few more notes – the Vernon Historical Society has one of the largest collections of Porternalia in the world (CTMQ Visit here) and Porter’s final resting place, just down the hill from his house, is also part of the Freedom Trail.

Since you just enjoyed reading several paragraphs about Charles Ethan Porter, no need to rehash that stuff. His gravesite is part of the freedom trail as well. And, if your car has shoddy brakes and you simply must drive by the Porter house, you may find yourself dead in the same cemetery as well. I’d imagine careening down Spruce Street into the cemetery would result in some serious internal organ damage. 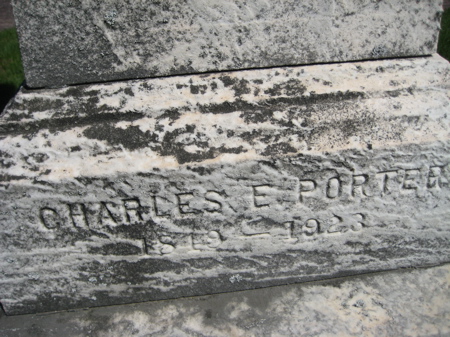 I do very much appreciate the Freedom Trail website supplying some fresh information in this entry:

Charles Ethan Porter (1847-1923) was a 19th century African American still-life artist most famous for his portraits of fruit and floral still-life studies. Although known primarily as an artist, Porter and his family were also involved with various social causes affecting African Americans. In 1860, Porter’s sister Cynthia Jane married Richard Alonzo Jeffrey, nephew of famed abolitionist brothers Amos and Leverett Beman. Jeffrey was from Meriden and was active in the Lincoln Club, founded by his brother George in remembrance of the president and for the advancement of civil rights and equal opportunity for people of color. He is believed to be the only black train conductor in the country at that time. Through family connections like these, the ongoing struggle towards freedom was strengthened.

And I must say, with the updated Freedom Trail site (February 2011), they now give directions to find these graves! “In Grove Hill Cemetery, follow the main drive and turn right at the fourth paved path, the Porter family plot will be on the right. The graves of the aforementioned Henry Vanness and Mary Porter are nearby.” I can add to that by saying once you turn right, the gravesite is only about 20 feet down the road. (The last place I checked, of course.) 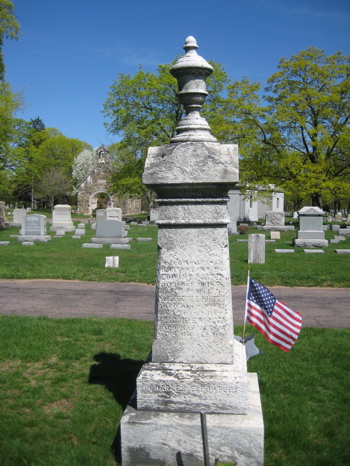 Lastly, the Vernon Historical Society told me that Porter lived in relative obscurity and didn’t find fame until after he died. I guess it’s true – I never heard of him until he was dead.