I revisited this trail in 2020 with Calvin on our bikes. The trail has been extended on its southern end and improved elsewhere. Below you’ll first read the original 2016 stuff and then I’ll append it with the 2020 improvements.

This is one of those pages that I always thought would be some quickie throwaway page. Walk along the railbed a bit, take a few pictures, write it up, publish it, forget about it.

Just another checked box on my way to total Manchester completion. 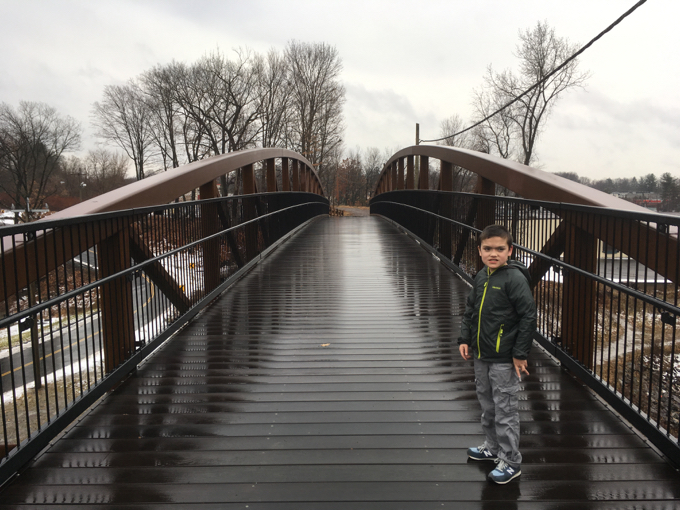 Then I read a bit about the old rail road and learned that there’s a bit more than meets the eye going on here. I’ll just tell you up front:

Okay. So? That’s not remotely exciting. 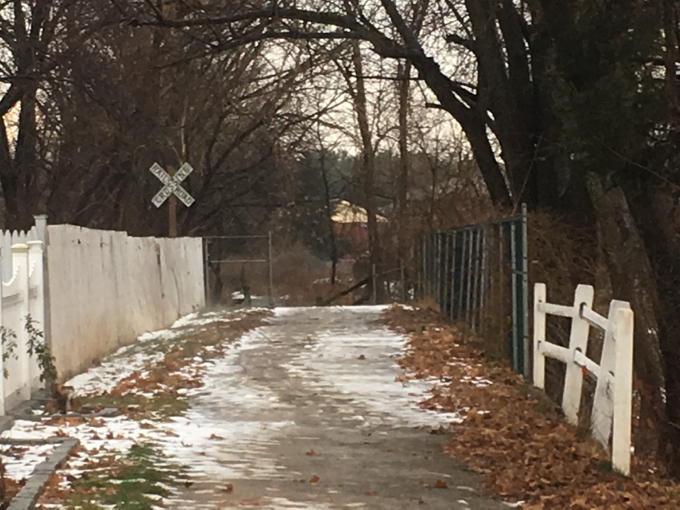 At 2.25 miles, it was the shortest freight-and-passenger railroad in the United States…

Hm. Yeah, that’s cool. That zings! I love superlatives – even historic ones like this, and –

but [the railroad was ALSO] the longest private railroad.

Whoa. Hold on. Slam the air brakes. I need a moment to wrap my head around this Westworld-like riddle. The Cheneys, who pretty much owned Manchester and are well represented on CTMQ, built a short little railroad to connect their mills to the main rail road branch through town. 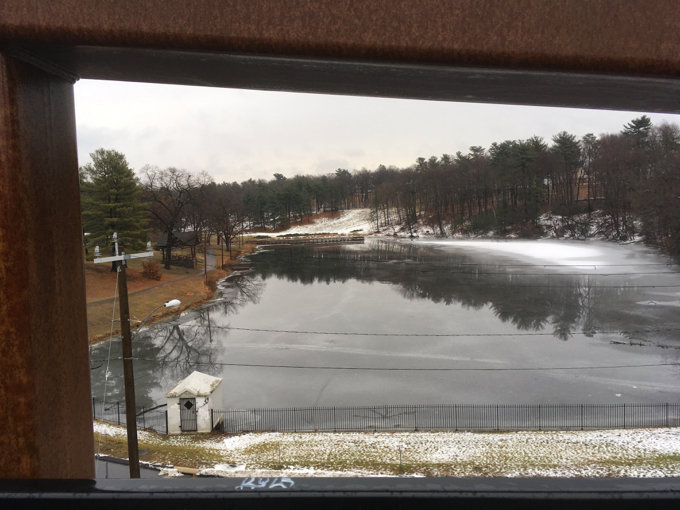 In doing so, they created the shortest rail line that carried both freight and passengers which also happened to be the longer rail line built by a private entity?

Got it. And now you can see why these things always make me laugh. We have no idea how true either claim is, but we’re going to go with it. Because it’s great. 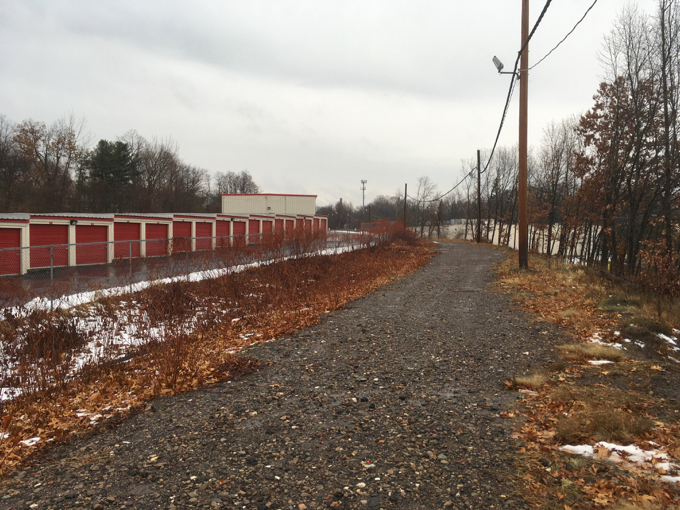 The southern stretch towards Center Street

Better than this trail anyway. Which, if you know how much I love weird superlatives, isn’t really a knock on the trail.

I took Damian for a walk along it on a miserable mid-December day. This trail is all about its history, as I assure you, you’re not getting any beautiful vistas here at all. 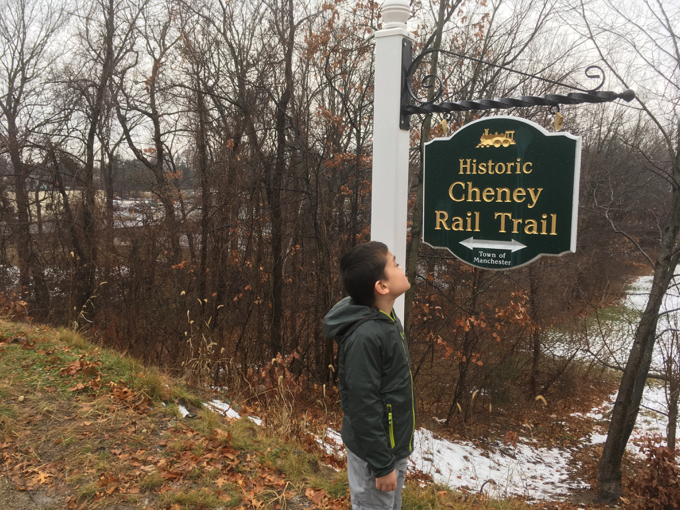 It is, after all, an old rail line through the heart of Manchester. If you start at the southern end (as it stands now, more or less) at Center Springs Park, you’re starting at the nicest place on the trail. The bridge over Bigelow Brook is lovely.

If you choose to walk south from here, you will walk behind barren cement walls of businesses only to dead end at the trestle at Center Street. (Plans call for the trail to extend to the East Coast Greenway along I-384, but the official brochure says this will happen “somehow” so I’m not too confident. 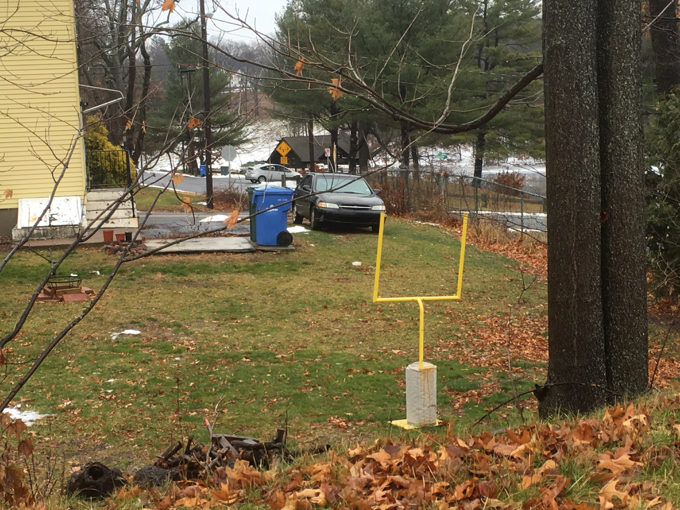 This is rad. I would have loved a mini-field goal as a kid

This southern stretch of the trail is owned by the town of Manchester, whereas the northern 2/3 or so is MLCT land.

Oh, and a few homeless people live along the trail in this stretch as well. We’ll call them hobos. 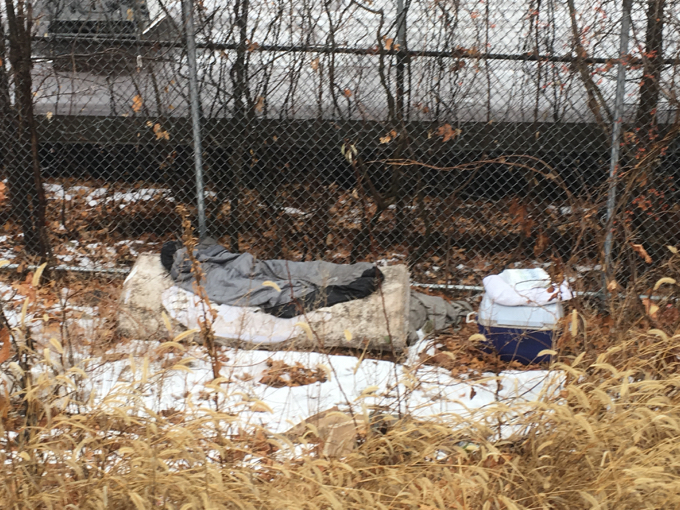 Heading back north, the rail trail crosses a few roads and walks behind a bunch of houses. The trail’s maintainers have done a great job; there are benches and signs, and historic rail road markers. The trail is way cleaner than you would imagine and it’s pretty neat to think about the Cheney mill workers getting this little ride home back in the day. 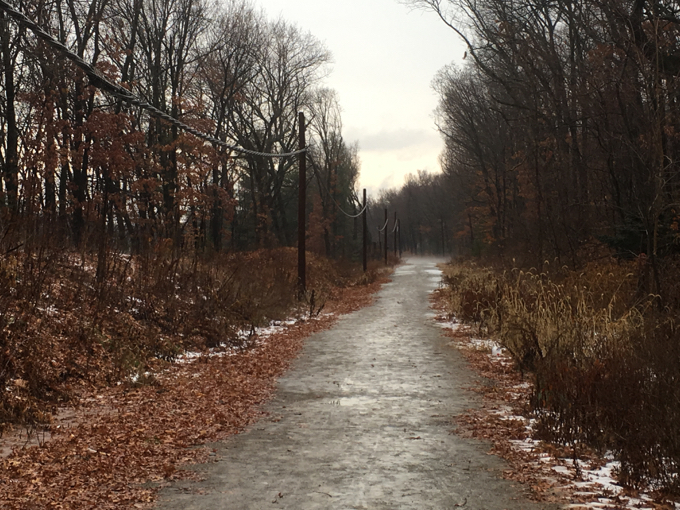 Then the trail just sort of ends behind Farr’s on North Main Street when it hits the existing railway. This is also near Time Machine Toy & Hobby on Hilliard Street, so if you’re there during a Model RR Sunday, that’s always cool. (A CTMQ visit.) 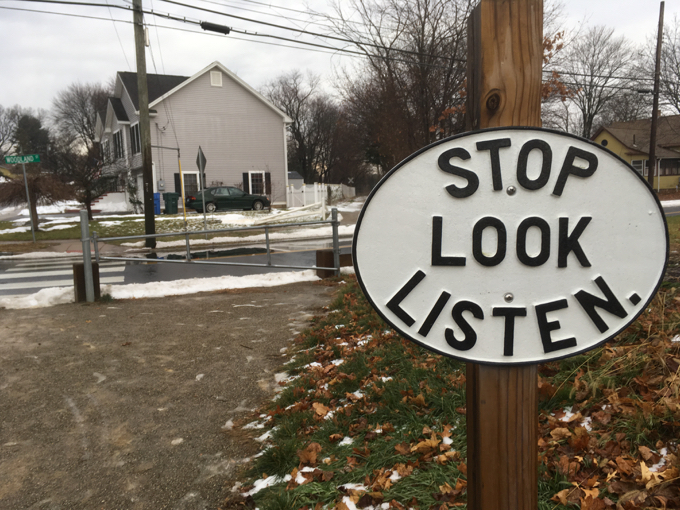 Oh, the MLCT plans/hopes to connect the trail to the Hop River rail trail to the northeast someday. Who knows. 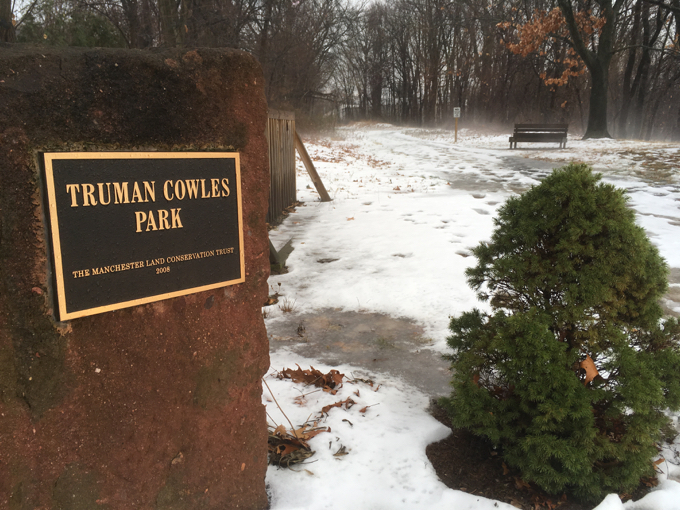 Near the northern end along Hilliard Street

Man, I can be such a hump. Twice above I made it pretty clear that I didn’t believe they’d improve this trail, let alone connect it to the Charter Oak Greenway/East Coast Greenway and/or the Hop River State Park Trail. Well, egg on my face. 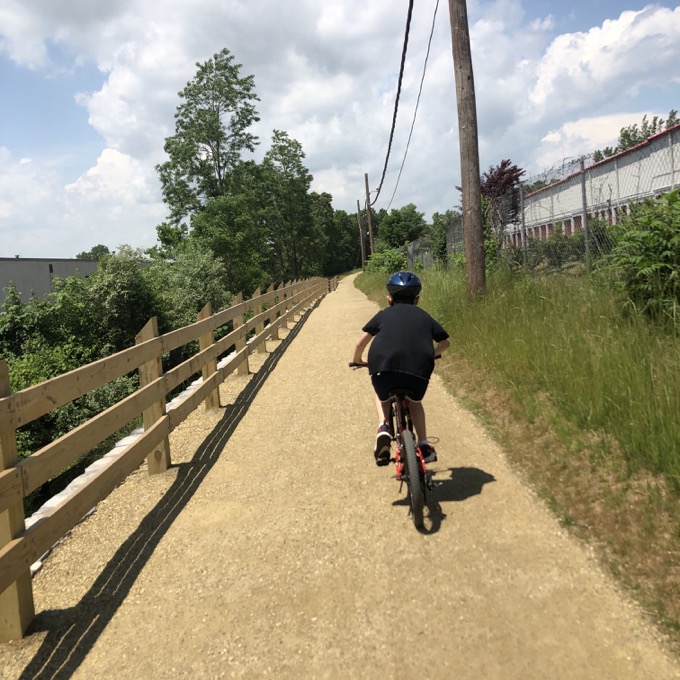 While neither connection on either the north or south end is complete, they both come close to their goals – and I believe are as close as they ever will be. Perhaps the northern end will be extended the few blocks to the Hop River Trail. Time will tell.

From the southern end, the Charter Oak Greenway is easily reached via Hartford Road from Charter Oak Park to Elm Street. The Manchester Historical Society’s Cheney Homestead and Keeney Schoolhouse are on the way. Calvin crashed here trying to take a sharp turn on loose gravel. Life lessons. 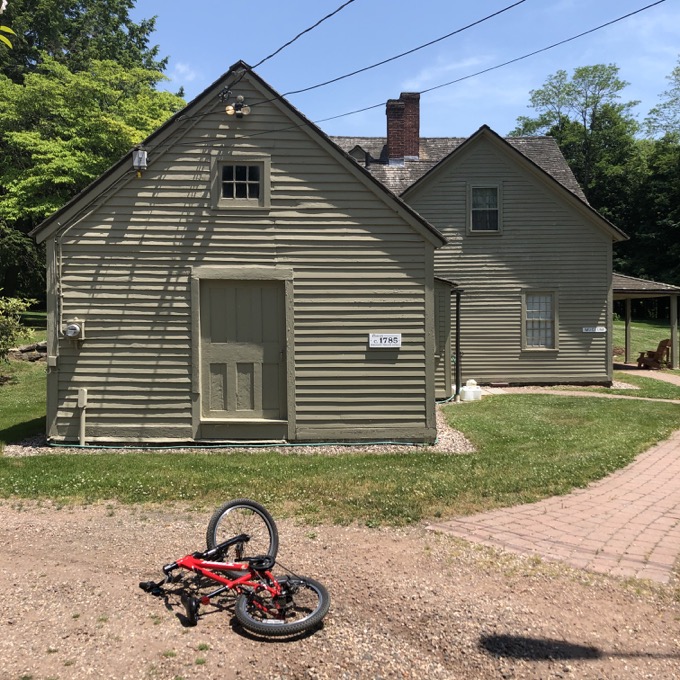 The trail up Elm Street isn’t really the trail. Straight through The Mills where I once lived. A few of those buildings are quite attractive. Another Manchester Museum (The History Center) and the trail begins for real. 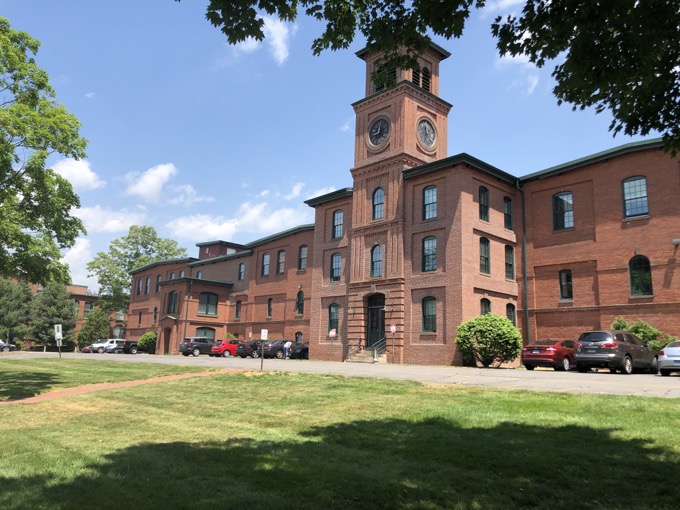 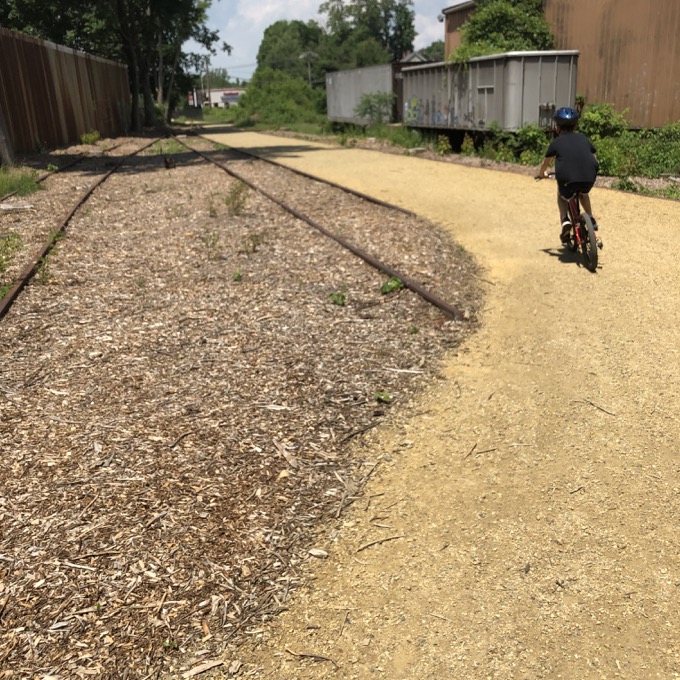 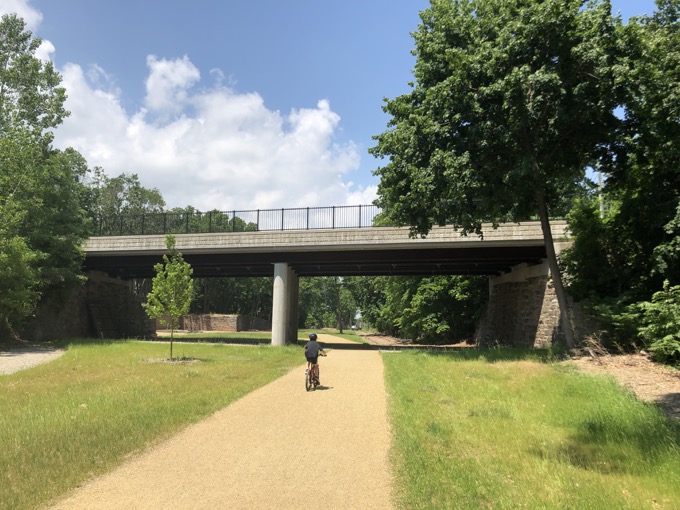 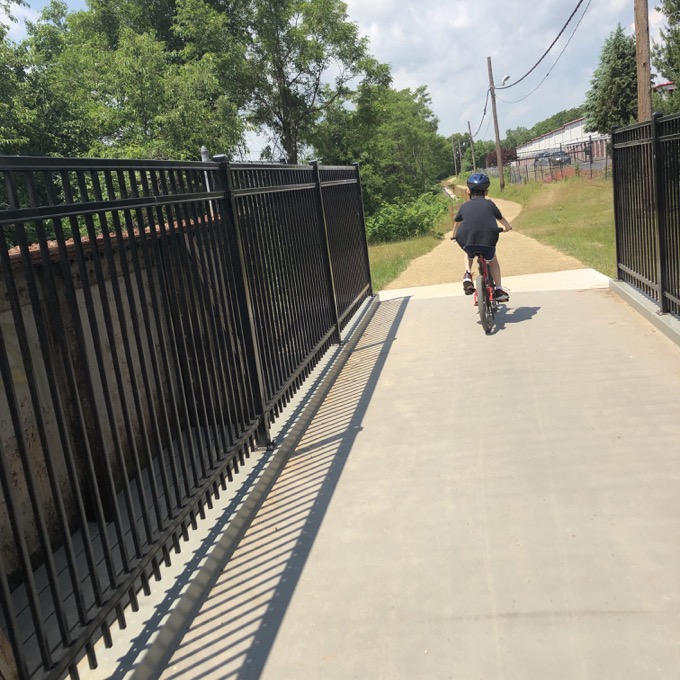 This is all new since my 2016 visit, and it’s quite nice. It curves around old train track which adds a nice touch. A new bridge over Center Street brought us to where Damian and I had to end three years prior.

The whole path has been repaved and cleaned up a bit. Some nice fencing has been added and I found the whole trail quite nice. While I didn’t see any homeless shelters in 2020, two gentlemen appeared out of the tall reeds at one point that… let’s say, they may not be two gentlemen I’d like to hang out with in tall reeds.

This little 2-mile trek would be a bit silly on its own if not for the awesome historical superlatives attached to it. And for that alone, I was happy to do it twice. 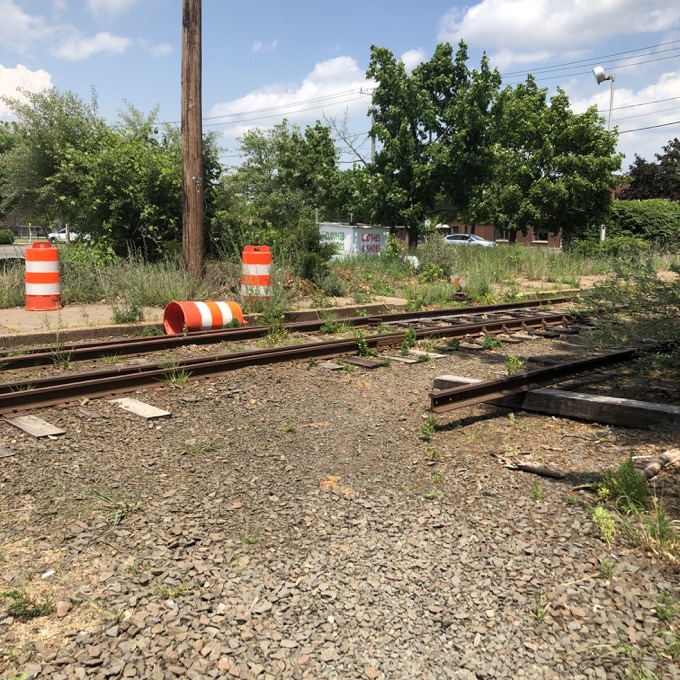