CTMQ > Everything Else > Cultural, Heritage, & Historic Trails > 1. Introduction to Middletown

This opening page was completely wrong for three years here on CTMQ. (See David’s comment below.) Normally I’d be embarrassed by this, but it really wasn’t my fault. 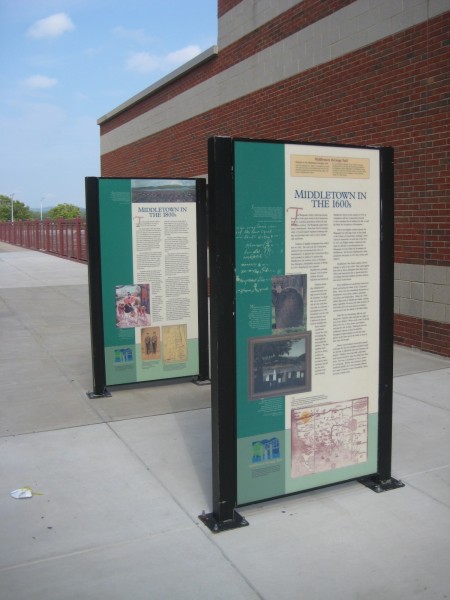 But I’m very happy to report that two years later, in the summer of 2010, I was able to revisit Main Street in Middletown and found the very large and very informative “Intro to Middletown” panels right where they should be, just beside the police station.

These signs are the biggest – by far – of any of the 20 panels around town. There are four giant signs, almost as tall as me, that give an overview of the first four centuries of white man’s incursion into town.

Actually, to be fair, the 1600’s panel does indeed start out with a nice paragraph about the Wangunks and their home here called Mattabeseck. In fact, even after whitey settled on the shores of the mighty Connecticut here, they incorporated the town as Mattabeseck which, at that time, spanned the river and many miles north all the way up into present day Berlin.

It only took them 3 years to get rid of that Native name though and it became Middletown – because it was about halfway between Hartford and Old Saybrook. How fortuitous that 400 years later it actually IS pretty much in the middle of the state. Which is kind of weird if you think about it.

The rest of that century was all about Puritanism, pestilence, driving the Natives out and slavery. The Bible is a wonderful thing. On to the 1700’s…

Ah, the golden age of Middletown! By 1750 this place was hoppin’! And it was rich! All of this was due, of course, to the maritime trade and Middletown’s location on the Connecticut River. Many people here made a lot of money via maritime trade from Boston to the West Indies. A bunch of people died sailing as well. It happens. 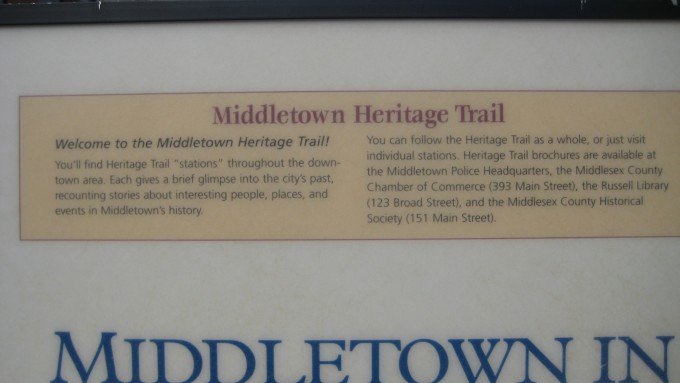 Even landlubbers got rich, making sails and shipbuilding. Heck, even rope makers and bread bakers lived the high-life. In 1769, Middletown was cut in half as the eastern side of the river became a separate town – first as Chatham, then later as Portland and East Hampton.

Many resident men died in the Revolutionary War; many of which were black. Even back then, Middletown was ahead of the emancipation curve and by 1800 all of the slaves were free men. This allowed them to marry the few remaining Wangunks which I don’t feel like writing a joke about for some reason.

In 1807, Thomas Jefferson banned international trade which was a disaster for Middletown. In addition, all the farmland was already being farmed. This situation caused a ton of Middletowners to flee west to Ohio, Pennsylvania and New York.

But the city survived and even thrived. It changed into a manufacturing center, making everything from pistols to swords to suspenders. Many men worked the famous brownstone quarries across the river. Heck, even women worked in the factories! Imagine that! WOMEN!

A bunch of potato-famine driven Irishmen settled here too, working the crappiest jobs around. In 1851, Cromwell split off from Middletown making it even smaller, but I don’t think that mattered. I mean… Cromwell? Please.

This century brought steamboats up the river and later, a railroad and electric trolleys near the end of the century. But lets go back to the 1830’s when the abolitionists became a force here. And in 1831 when Wesleyan opened, making Middletown an education high point in the whole country. Middletown opened the state’s first high school and later, the Hospital for the Insane. Yeah, smart or crazy, Middletown was the place to be!

Over 100 men from town died in the Civil War and the whole town threw itself behind the Union cause. (I visited the General Mansfield House during their Civil War exhibit, which was excellent.) In 1866, the town lost its last chunk when Middlefield became Middlefield but even though it was geographically smaller, Middletown was all grown up and still fairly prosperous. 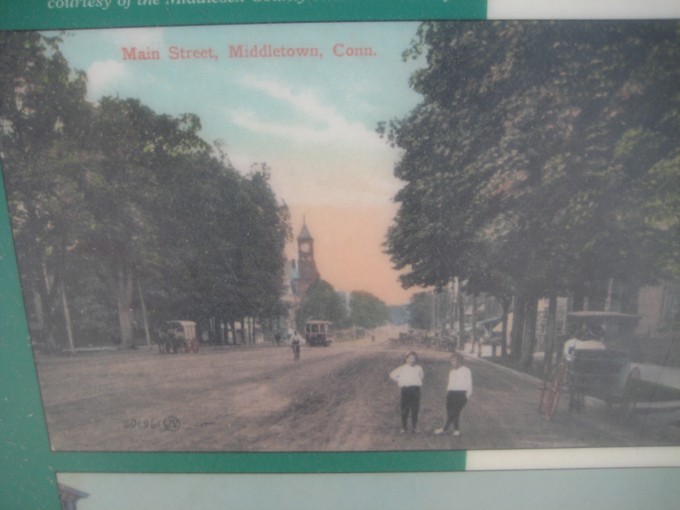 In the 1900’s, tons of immigrants came to town, notably the Italians that still shape Middletown today. World Wars, the Great Depression, the closing of major factories, strikes… Middletown was down for the count. Then the Arrogoni Bridge was built (the sign calls it “graceful”) and all was saved! Not really, but anyone still reading this is now laughing at the Arrogoni deathtrap being called “graceful.”

Later on, the town gained a Pratt & Whitney plant and got a “skyscraper” in 1989! All 14 stories of it! It also got a gigantor Aetna building in 1983 which was perhaps the most poorly designed office building in the world. I should know, as I worked there from 2005-2008 before we moved to Hartford. That monstrosity was demolished in 2010.

Today, Wesleyan pretty much dominates (as it should) as a premier liberal arts school. Main Street is doing it best to thrive, with all sorts of excellent restaurants and an eclectic mix of old and new. Middletown has its problems – from flooding to drugs to post-industrial malaise, but to me it seems to be doing pretty well.

Now lets get to the rest of this Heritage Trail!