A couple years ago, early on in the evolution of CTMQ, I decided to branch out from just museums and start exploring some of the other attractions around the state. Of course, I’ve gone completely off my rocker in the intervening time, but that’s not germane to my point. My point is, that one of the first non-museum sections I began to develop was the Connecticut Wine Trail in 2008. Oh, how young and innocent I was back then. 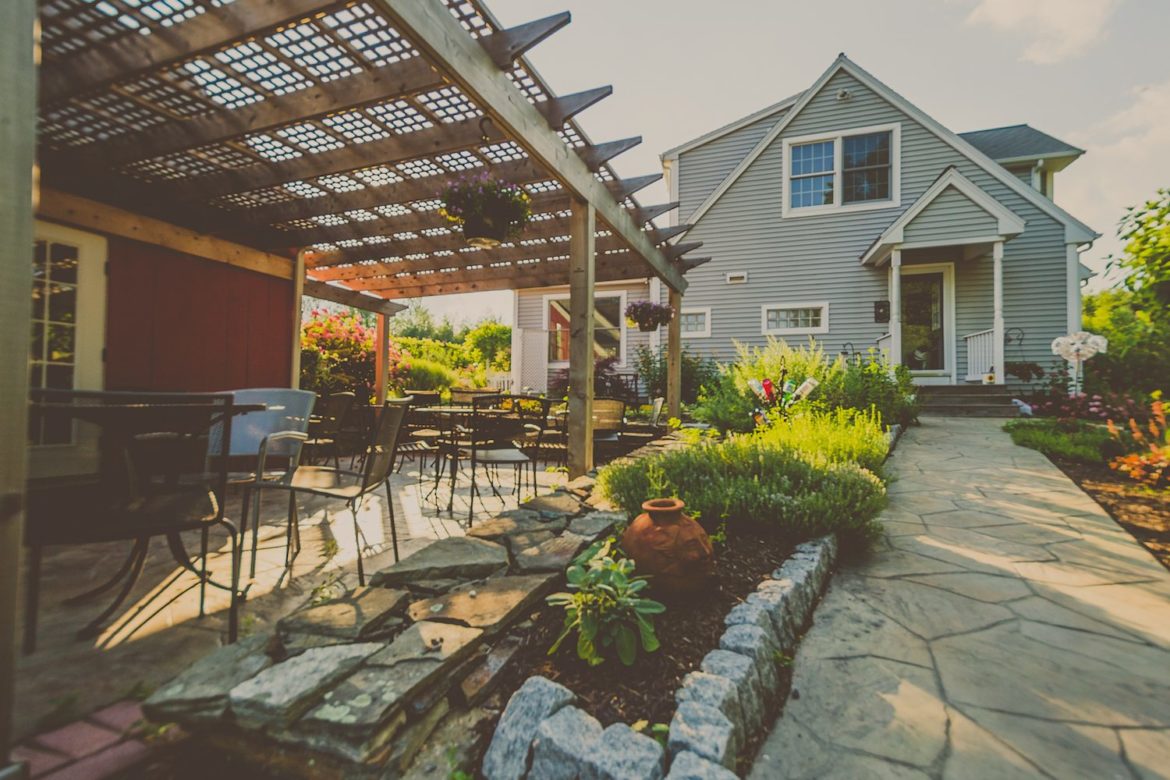 After my first wine forays, I forgot about the wineries for a while until I received a very nice email from a Linda Auger, owner of the Taylor Brook Winery. She helpfully explained how the Connecticut farm wineries worked and why some had nice blue “Wine Trail” signs directing passersby and some didn’t. She ended her note with a warm invite out to Woodstock and that was the end of that.

But not really. Because back in those days, my readership was probably 10% of what it is now and Linda’s email may very well have been the first one I received from a place that I had – or would be someday – visiting. She made me realize that, “hey, this is pretty cool. People want silly ol’ me visiting their places and writing about them.” Years later now, I still feel pretty good about such emails. 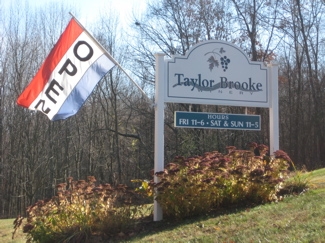 And so, with Hoang and Damian held captive in the car, I sprung it on them that we were driving up to Union to eat some Connecticut goat cheese at Bush Meadow Farm and then would be driving east to Woodstock and Taylor Brooke, our 14th winery of the year, to complete our 2009 wine trail passport program. For those of you unfamiliar with Union and Woodstock, this is not a quick little trip down the road. But my family was hungry, thirsty and game, so off we went.

The drive from Union to Woodstock is remote and beautiful; through Nipmuck State Forest. Northeastern CT isn’t called “The Quiet Corner” for no reason. There’s pretty much nothing out there – on the face of things. Leave it to me to uncover all the cool stuff hidden away up there under snow for half the year. Taylor Brooke, though, can’t really be considered “hidden” though, as it’s been around for quite some time. 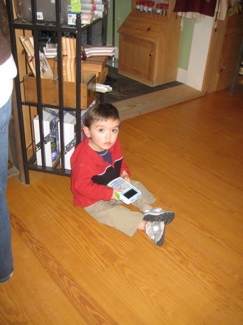 We arrived at the winery with Damian just about to fade out to a nap; but we had some tasting to do, so wake up kid! The driveway up to the tasting room certainly did the trick – it’s Woodstock’s version of San Francisco’s Lombard Street. Seriously, there are about 4 switchbacks straight up a hill to the parking lot. We survived and entered the very homey room.

I have no idea why, but I had the preconception that Taylor Brooke would be on the smaller side. It’s not; the well-appointed tasting room isn’t huge, but there is a whole other sit down area to the side with tables and another bar. The winery gives a few options for tastings: 3 for free, 8 for five bucks or all 12 for eight bucks. I joked that Hoang and I would each like two separate tastings of three wines. To her credit, the server chuckled politely even though some doofus probably says that every day. I liked this place already. 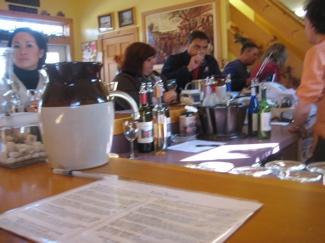 Damian found a comfortable area to catch up on his emails on his Blackberry while Hoang and I shared the 8 tastings for five dollars. Perhaps we were a little giddy at this being our last winery visit for 2009, but we found ourselves really enjoying the wines. Now, I can’t pretend to remember which eight we sampled, but I know we liked all their Rieslings, especially the cranberry one. Which is really odd, because I usually hate Rieslings, but in this case, the tartness of the cranberries really mellowed out the usual sweet tinny taste that I dislike in Rieslings. 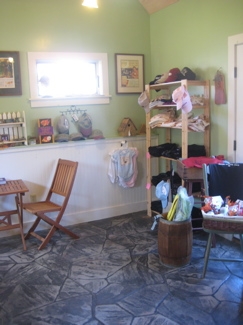 Before delving into the wines, here’s a fun story about how the Augers got into winemaking. I’m sure it’s been romanticized a bit, but that’s fine by me. The winery produces about 2100 cases of wine per year from their 2500 or so vines high up on the hill overlooking Taylor Brooke. And their diversity of wines is rather impressive. A few of note (See all their wines here) include:

Riesling: This clean, crisp, dry white wine is slightly fruity with flavorful hints of peach and apricots. With its floral aroma and bouquet of honey, it’s a nice balance of fresh fruit and crisp acidity. Pairs well with Asian food. 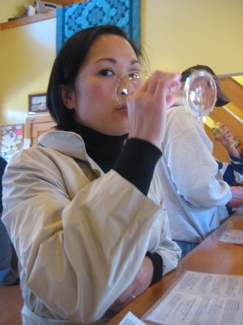 Autumn Raspberry: 100% Riesling with a natural raspberry essence. Another semi-sweet favorite which is wonderful with roast chicken with rosemary. Make a reduction sauce for your roast pork and serve with dinner!

Winter Pomegranate: Our newest release is already creating a huge buzz! This is another wine made from 100% Riesling with the infusion of natural Pomegranate essence. Catch us before we close for the season on Dec. 31st to make sure you don’t miss out or look for it at one of the package stores listed on our website. This one is sure to be flying off the shelves!

Cabernet France: The Cabernet Franc grape is the fruitier relation of the Cabernet Sauvignon grape. Less herbaceous with less tannin, the style is reminiscent of a light, dry Pinot Noir. Pair with a dense fish, turkey, light pasta or roast beef.

Roseland Red: A true Bordeaux blend of Cabernet Sauvignon, Merlot and Cabernet Franc. This wine is fruity and peppery with a hint of Hungarian oak. 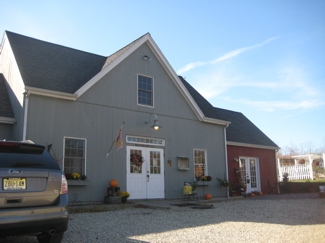 Chocolate Essence: Chocolate infused merlot port! Strong chocolate on the nose, the fruity complexity (raspberries and cherries) of the merlot port on the palette and a long, chocolate finish. This truly special wine is “dessert in a glass.”

There are several others of course. I really like how they mix tart fruit with the Riesling grapes. All the ones I tasted worked for me… In fact, we bought a bottle of the cranberry Riesling and served it at Thanksgiving, along with a couple selections from Bishop’s Orchards and a locally raised turkey from Gozzi’s Turkey Farm, both down in Guilford.

One last note about Taylor Brooke: I really like their bottles and labels. While we didn’t get a free glass with our tasting (we have far too many wine glasses already anyway), but the one bottle we did buy was really attractive. Frosted glass with what appeared to be a hand painted label in the style of 19th century Americana painting. Think Grandma Moses. 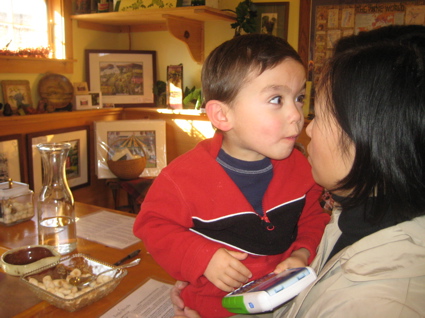 Damian lasted for the entire visit and was very good (and cute) the whole time. I’m sure he’s quite tired of these winery trips, but hey man, I’m sure he’d be happy for his parents to win that trip to Spain. (Which, I’m thinking we didn’t win as I believe the drawing was earlier the week I’m writing this. Guess we have to do this all over again next year… Can’t wait.)

We thanked the nice folks at Taylor Brooke, wound our way down the crazy driveway and headed south into Woodstock’s town center where we made one more quick stop – all the way in England – at Mrs Bridges’ Pantry! 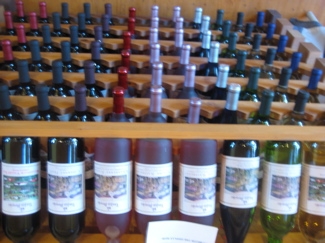