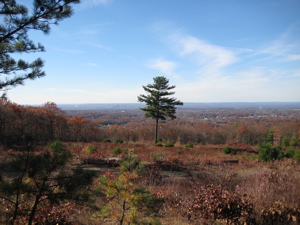 Thanksgiving weekend: A time for family, television, reminiscing, playing with the kids, long conversations over coffee and dessert… and coming up with excuses to get the heck out. And what better excuse than, “I’ll go to Babies R Us and pick up that device that’ll stop Damian from playing in the toilet water and oh, since it’s a nice day out, I might as well also hike the Case Mountain Recreational Area Trail system while I’m over that way.”

It worked! Although it was pretty chilly out – maybe around 30 degrees or so – the sun was shining and I had a couple hours to knock out another set of trails in Connecticut. I had walked to (what I thought was) the top of Case Mountain several years ago to take in one of the better views of the capital city, but back then it was a straight up and down hike. 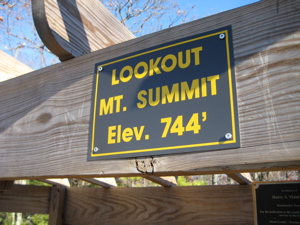 I’ve since learned that a) there is an extensive trail network there and b) I climbed Lookout Mountain rather than Case. But I was going to rectify all that once and for all. And in the spirit of Thanksgiving, we should all be thankful for that. Let’s first dispense with the boring stuff:

The Case Mountain Recreation Area encompasses approximately 640 acres of combined open space and watershed lands stretching from the Glastonbury town line north to I-384 in the southeastern section of Manchester. Trails are maintained by the Manchester Conservation Commission, the Connecticut Forest and Park Association and concerned volunteers. The trail system consists of 7 individual blazed trails, the Carriage Path white blazed fire road, and the Shenipsit blue blazed through trail cover well over 10 miles of varying terrain. 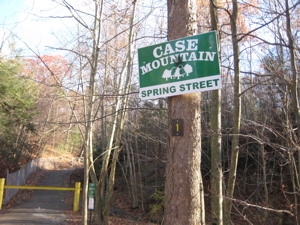 I lifted that bit from the Town of Manchester’s website. How “well over” 10 miles can it be if it’s not at least 11 miles? Ah, I’ll let that slide as my Manchester experiences so far have been great. This hike would be no different. As with past “trail networks” that are needed for completion of the CFPA’s Blue Trails Challenge, I planned to walk as much of it as I could, within reason, being sure to take in any and all interesting aspects.

I purposely avoided the blue-blazed Shenipsit Trail for the most part, because I’ll be tackling that in its entirety at a later date (Which I did, a few years later). I did hike large chunks of the pink-blazed Highland Trail and the white-blazed Carriage Trail as well as the entire lengths of the yellow-blazed Lookout Mountain and Birch Mountain Trails. Once again, like People’s Forest in Barkhamsted, I’ll try to present them in a logical way. 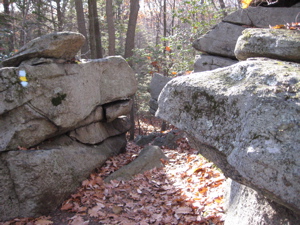 But first, some history. The Case family were prominent Manchester industrialists who were forced then – and now – to live in the shadow of the more prolific Cheney family. The Cheney mills live on at the Old Manchester Museum. It appears to me that the Case trail network lies within Highland Park, which seems to be the same thing as the Case Mountain recreational area referenced above. 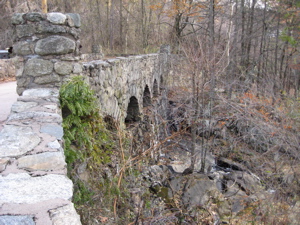 There are still a few Case family mansions on Spring Street, near the parking lot where I began my hike. The grandfather of friend-of-CTMQ Liz actually lived in one of them. Check this out, from an email from Liz: This was the summer home of Maytie Case Crowell. They were from Boston and summered in li’l old Manchester. My Grandfather bought the house in the early 50’s for either $40K or $50K. I can’t remember which. The pink mansion, which is on your right on Spring Street as you get off 384E exit 4 and take a right, will undoubtedly be for sale soon, as Mrs. Thrall just passed away.” 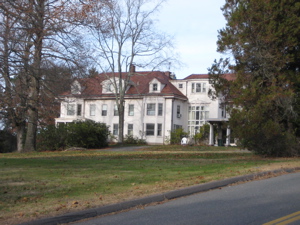 This is a big house

The house above is the recently deceased Mrs. Thrall’s house. (I had snapped the shot figuring it was some sort of Case mansion.) Let’s get going… I’ll sprinkle in some more history throughout…

There is a nice waterfall at the Spring Street parking area, originally called “Nip-pau” (“Water” “falls”) by the Native Americans. From the 17th through 19th centuries, copper was mined in these parts but never too profitably. The little falls here is a nice way to begin an adventure on the Case Mountain trails. There are lots of trailheads into the network, but this one is the most centralized. 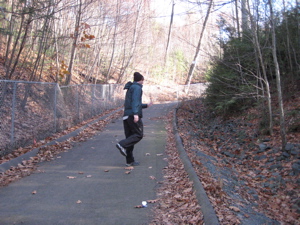 From the parking lot, a paved path steeply ascends past a few new houses and then into the woods. The Carriage trail loops through the whole park and is certainly the most boring of all the trails. For that reason, I continuously jumped off of it to do more of the other trails. So after a short jaunt up the hill, I turned right and completed the Highland Trail. Which gives me an opportunity to talk a little more about the history of the Cases and the area.

In 1862, three Case brothers rented a space in Highland Park where they set up a business for washing cotton waste. They later built a mill for making album board and other paper products, as well as a shop for building paper-making machinery, and activities to support the mills, such as a blacksmith shop to shoe the work horses who pulled the delivery carts and snow plows. 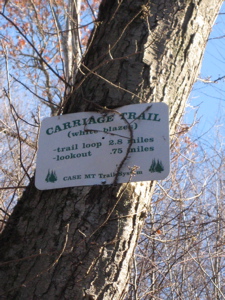 And to my mind, the best place to do that is along a carriage path. So in 1903, A. Wells Case began the construction of a carriage path, stone walls, bridges, and a public spring area. This project was completed by his son in 1909. Today, the carriage path is now the Carriage Trail and is wide, graded, and covered with gravel. It navigates around the two main hilltops here, and like I said, is actually not too exciting, except for the Case Pond area.

After hiking along the 3 other trails in the park, I linked back up with the Carriage Trail after summiting Case Mountain. There are some very nice benches along the path as it descends towards the trailhead off of Birch Mountain Road. Turning away from the road, the trail then takes in Case Pond. Created by the Case damming a long time ago, it’s a rather nice little place. Here, I also saw a bunch of the stonework done by the Cases as well.

Leaving the pond area, the trail slowly climbed back up towards Lookout Mountain but turns west and then back down to the parking lot on Spring Street. 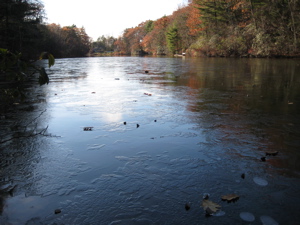 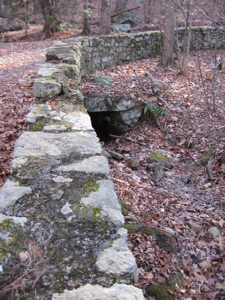 The stonework throughout the park is pretty incredible

This was actually the end of my day, so now I’ll go back in time to discuss the Highland Trail…

In all my hiking, I’m not sure I’ve seen too many pink-blazed trails. Cute. The Highland is a nice little trail with a huge payoff. I began down it heading south from the Carriage Trail early in my hike. It’s a nice, graded uphill through some laurel and hardwoods. Down and around and then back north, crossing the Carriage Trail and finally getting to the top of Lookout Mountain. 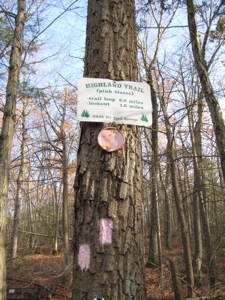 At 744 feet, I’m hesitant to call this a mountain… but there is actually a unique view. A straight shot across the Connecticut River Valley over to the ridges that the Metacomet Trail follow… with Hartford down below. There are several views of Hartford from the west, but not too many from this vantage point. 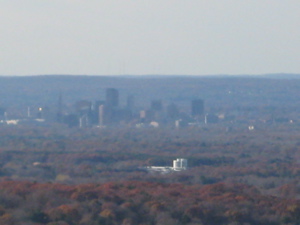 I sat on one of the benches up there for a few minutes, enjoying the solitude and crisp air. Just then, a pack of mountain bikers appeared and talked about how radical they all were. This is one of the rare parks/trails that allow mountain biking, so I didn’t get sore at them. I left the mountain top and hiked east, along the Lookout Mountain Trail, completing my time on the Highland. 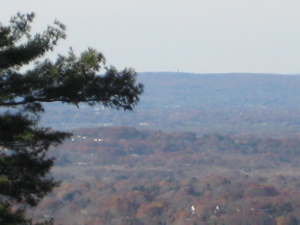 Lookout Mountain trail is probably the least hiked in the northern section of the park. Therefore, it’s probably my favorite… as it feels the most remote. From Lookout Mountain it heads east, crossing the Shenipsit, the Carriage Trail, and then the Birch Mountain Trail before looping south. The signage of the whole network is very clear and abundant. (Even though I corrected two separate hiking parties within 20 minutes at one point.) 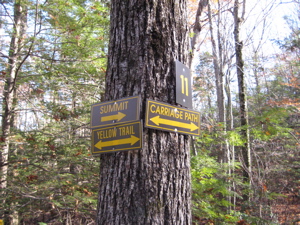 Lookout Mountain Trail intersects with this trail way down in the southern portion of the park. Birch Mountain trail heads north, paralleling the Shenipsit and the Carriage Trail for the most part. After nearing the summit of the eponymous peak, it then climbs up THE Case Mountain. 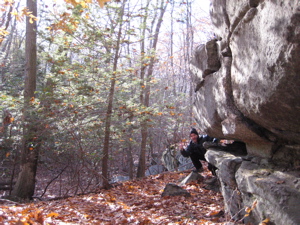 The trail is really pretty cool, as it wends its way through some unique rock formations and tunnels of laurel. I couldn’t help but thinking that the rather intricate blazes on this trail (wouldn’t a simple green or orange or red have been easier) looked like the dyed telomeres I used to know something about back in college. 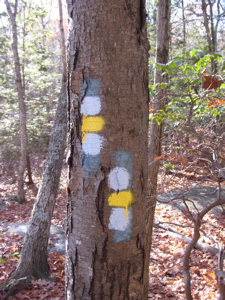 Seriously, there’s no need for such a crazy blaze 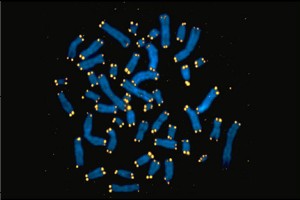 A telomere is a region of highly repetitive DNA at the end of a linear chromosome that functions as a disposable buffer.

The trail doesn’t cross the actual summit of Case Mountain, but I sought it out (by my eyes) just to say I did. Though, it very well could be behind the fence protecting the two water towers up there, I’m not sure. After the summit, the trail finishes by hitting the Shenipsit on it’s way north. 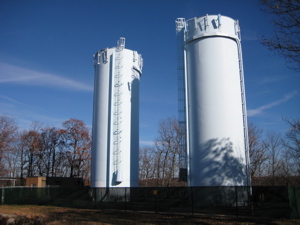 It was at this point I cut back across to the Carriage Trail as noted above. I found the Case Mountain Trail network to be a really nice place for a family hike; a great view of Hartford, some cool rocks to climb on for kids, and some interesting history to discuss along your hike. 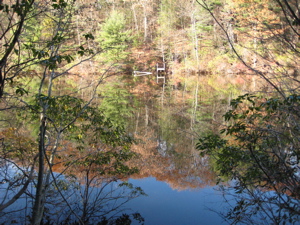