If you are reading my thru-hike of the Hockanum River Trail in order (generally south to north), you have already read the Hillside & Olde Roberts Trails page. If you haven’t, it’s a fun one and you should. Better yet, start at the beginning with the HRT introduction and catch up.

We’ve made it to the last official segment of the Hockanum River Trail in East Hartford, heading north. I wrote in my report of the last section that it was probably my favorite, as it was the most “wild.” That’s relative to the other sections being mostly over-engineered urban/suburban trail, of course. But as I begin to think about the Chipper Drive segment, I may lean Chipper. I’m feeling chipper. 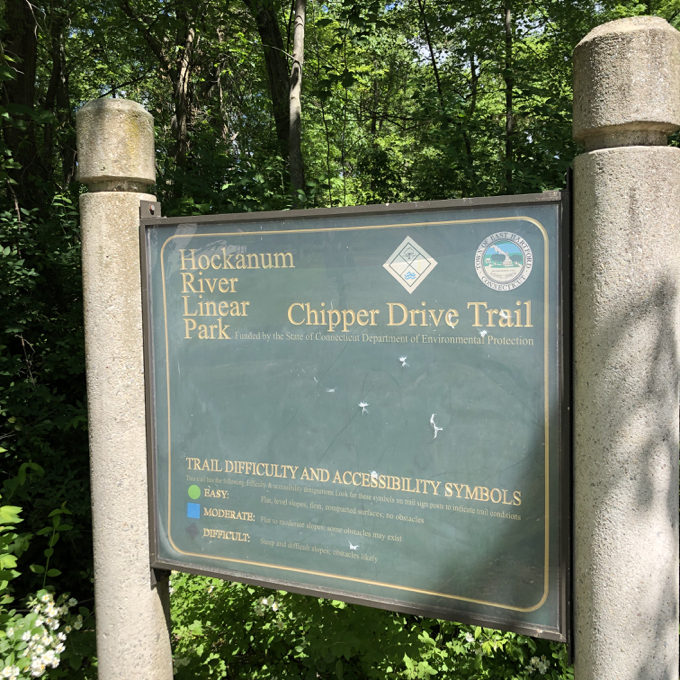 It’s like each section of the HRT is a child. I just love them all despite their faults and flaws. (Except maybe a couple in Vernon and Ellington. But let’s keep that our little secret.)

A road walk is required to bridge the Olde Roberts Trail segment and the Chipper Drive one. There are no blazes or signs, so you need to know where to go. Hiking north, take a left when you pop out onto Olde Roberts Street and follow it to the end, passing the large Rogo beverage Distributorship. 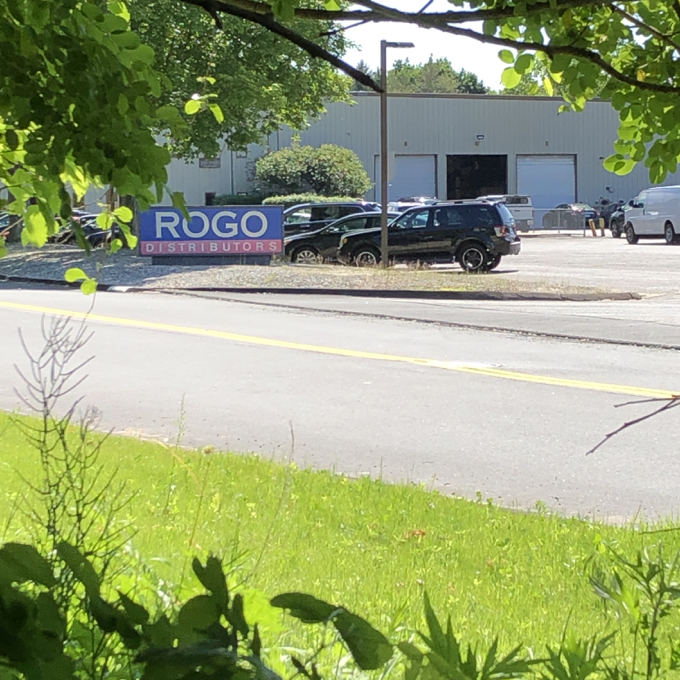 Left at Forbes Street and an immediate right onto Hudson. It is on Hudson that you’ll find a nice little pocket park dedicated to East Hartford’s veterans of Desert Storm and Desert Shield. The plaque on the “Wall of Gratitude” is a little weird, noting that the “victories” (scare quotes mine) united our nation and helped heal some of the wounds suffered by Korean and Vietnam War veterans and their families. 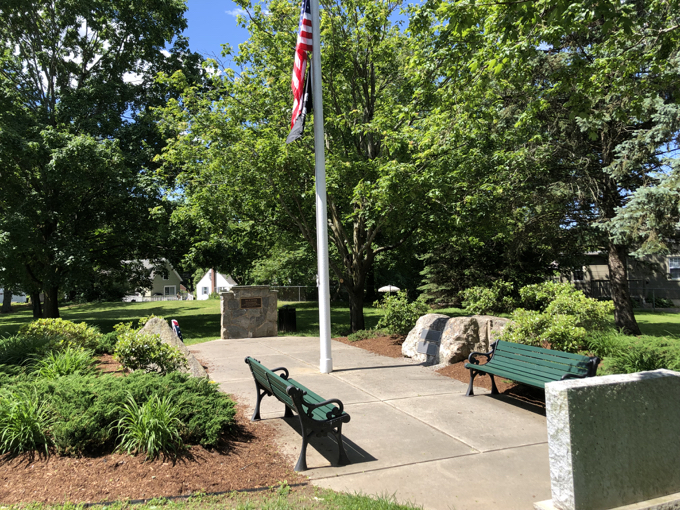 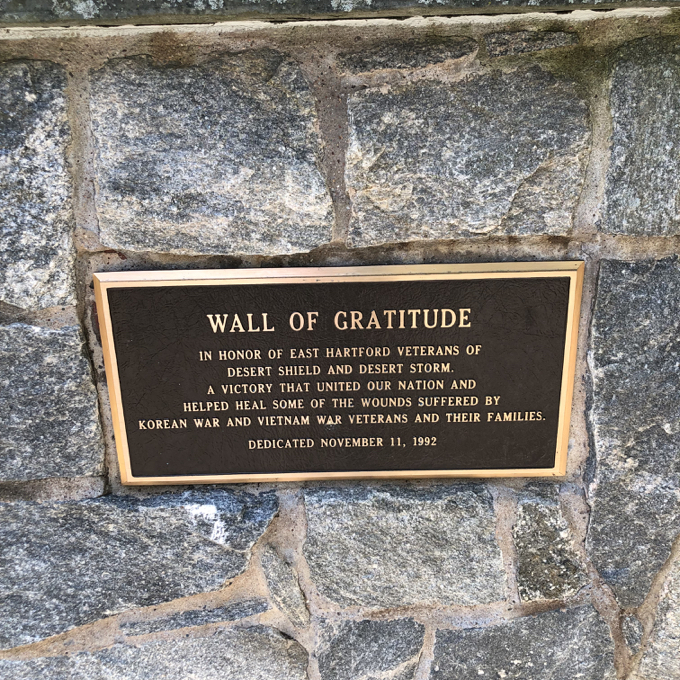 Moving on. At the end of Hudson Street, bang a left on Scotland Street and after a minute or two, you’ll see the familiar HRT signpost and the trail. If for some reason you want to skip all of this, there is yet another large HRT parking lot on Chipper Drive with a boardwalked access trail to the main trail. Just as you’d expect by now.

But I’m going to start out on Scotland Street. Because I’m an HRT purist, through and through. 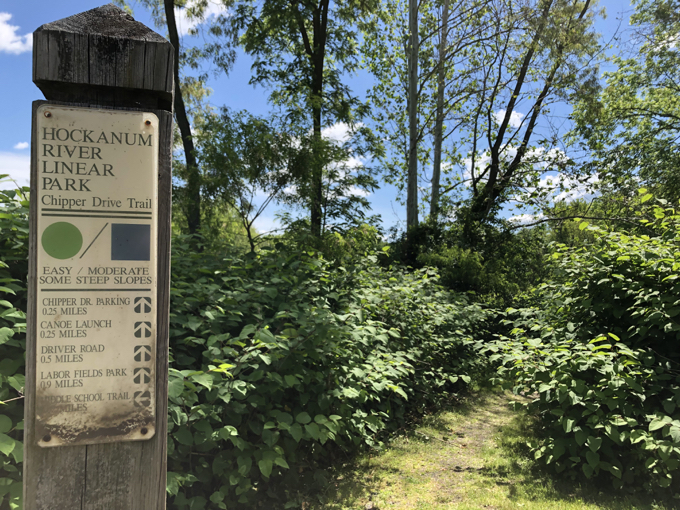 I just learned that this portion of the Hockanum River is known as Scotland Road Pond. It was created by the damming that resulted in the falls we saw in the last section. The trail off the road almost immediately becomes typical ridiculous HRT boardwalk, as it snakes through some rather robust groves of Japanese knotweed. 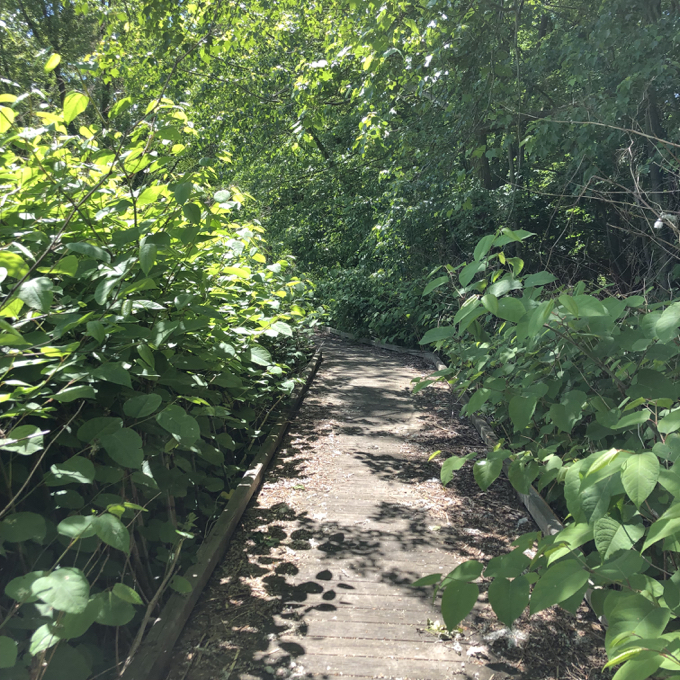 There are some nice views of the so-called Scotland Road Pond and the East Hartford Middle School property on the other side. It is at least the tenth place on the HRT in East Hartford that does not look or feel remotely like East Hartford.

I say that not as a knock on the town, but as a simple statement of fact. You don’t think of scenes like this when you think about East Hartford: 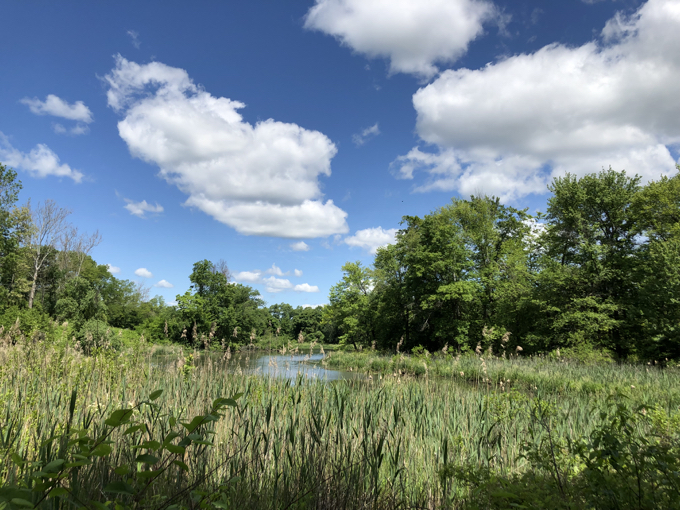 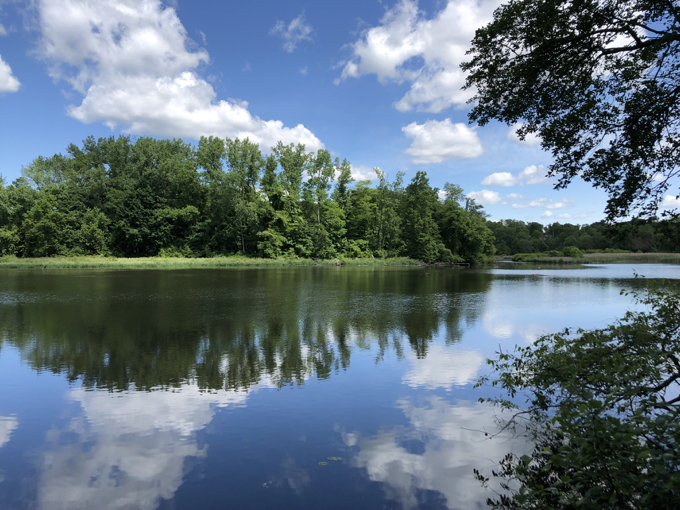 I mean, if I wanted to knock the town, I’d feature more photos of litter and industrial sites… but over my entire “thru-hike” of the HRT in East Hartford, there’s a decided lack of that type of stuff along the trail, and –

I’ll tell you what – massive boardwalk trails, that’s what. There’s much more boardwalk here, along the Chipper Drive Trail. 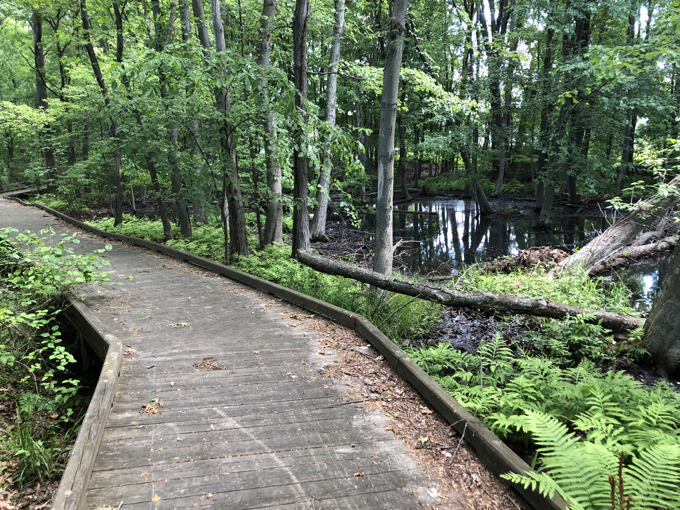 The trail travels between the Hock and Chipper Drive. It seems to be pretty popular with locals, as crossed paths with more people on this section than all the others in East Hartford combined. Have I mentioned that it’s not just the solid construction of these things, it’s also the wideness of them.

And look here; massive long boardwalk, wide enough for four people to walk abreast, with a cut-out made for a bench. The effort that went into these structures is just hard to imagine. 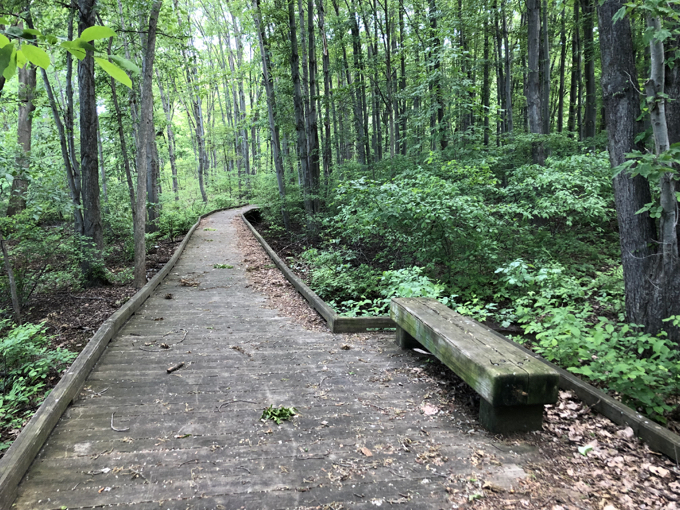 This is a nice section of trail, as it remains under leafy cover and almost always has the river in view. It feels… safe. Like a nice suburban trail through the woods that connects to a nice suburban park. Still, I think locals probably have some concerns about walking this path – at least at night.

Perhaps not the concerns I’d be most concerned with, but I guess it pays to be prepared: 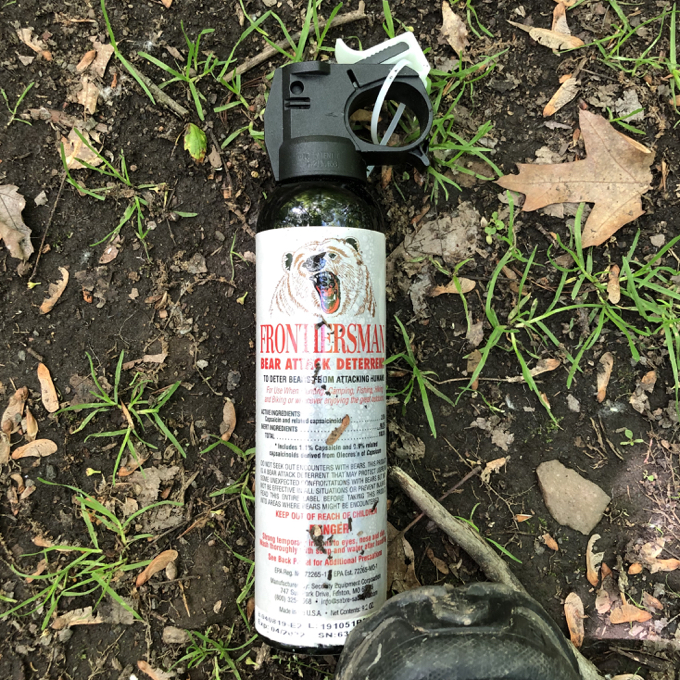 I LOL’d upon seeing this left on the trail. Truly. Alone in the woods along a giant boardwalk in East Hartford, I laughed. Bear spray? With a grizzly bear on the label? For “Frontiersmen?” What in the world? Who thought that they would need such a thing? (Unless, of course, it was actually for use against aggressor humans.) 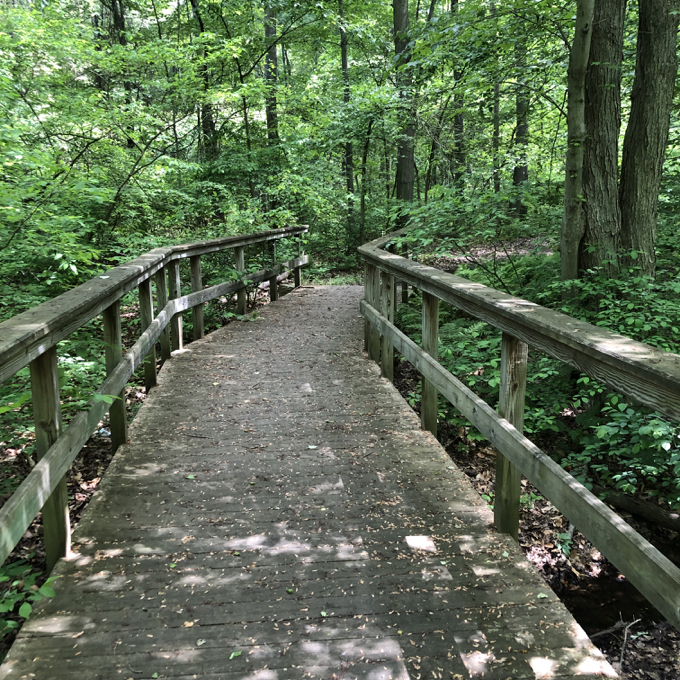 For the last quarter of this section, the trail follows along, yes, more boardwalk, but also some stone dust as well. I walked past an amazing native American structure that has weathered centuries of development and activity: 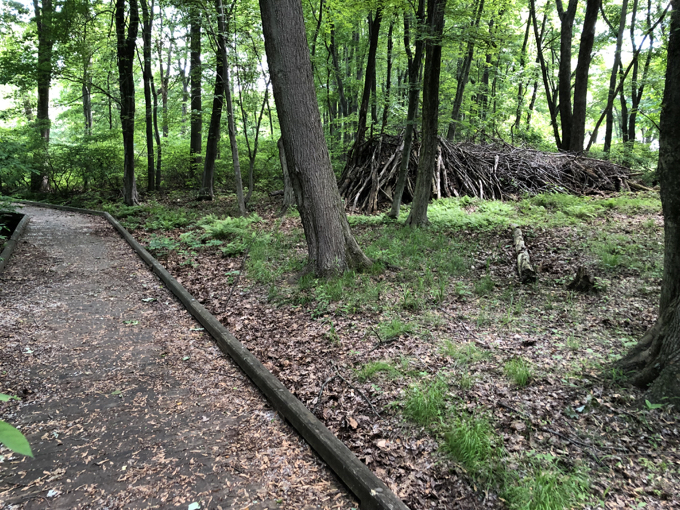 … Either that or a homeowner likes to be creative with his brush. More boardwalk, another bridge, and then the light at the end of the green tunnel: Labor Field! I burst forth into the sunshine of success! Woo-HOOOOoooo… Wait. There’s more. 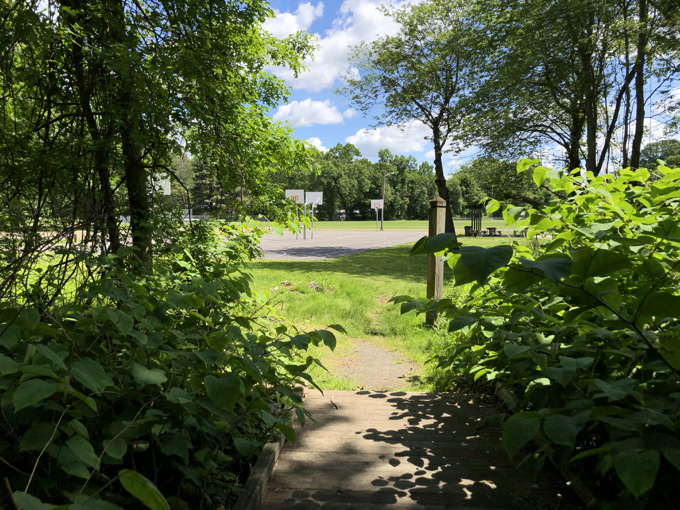 Bwa-hahahahaha, you don’t yet know the Hockanum River Trail, do you? My word. This “little loop trail,” is a raised boardwalk with massive observation decks jutting out over wetlands and such. It’s crazy. Why does this even need to exist in any capacity?! 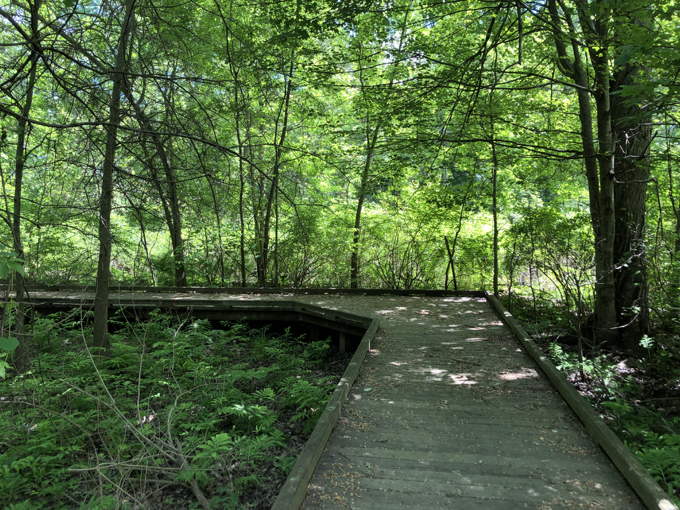 Of course, I love it and marveled at the whole thing, but I can never shake that voice inside my head that asks why. Why is this here?

And why does the official HRT map show the trail ending once I hit Labor Field? It fails to show this incredible little loop trail and more importantly, it fails to show that the trail actually traverses the park, through some trees, and finally ends down some stairs at Walnut Street. 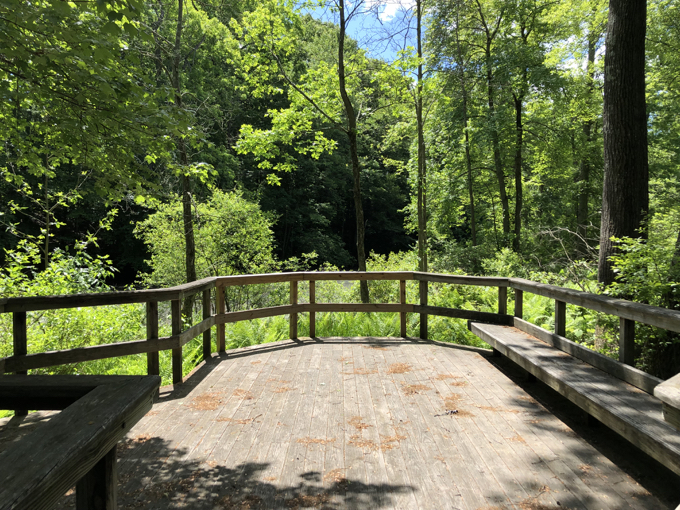 There is a nearly 3 mile gap from Walnut Street until the next section at Laurel Marsh in Manchester and you have three choices to cross it on foot or bike: Simply walk along route 44 to the parking lot, Cut over onto the Captain John Bissell Trail across from Wickham Park, or the more adventurous stroll through neighborhoods to a “secret” cut-through from Torpey Drive.

As for me, I still have a piece of East Hartford to do before I say goodbye. I walked the “unofficial” HRT section called “Middle School Trail” which is across the so-called Scotland Road Lake.

It’s been a wild ride thus far, and we still have three towns to go! 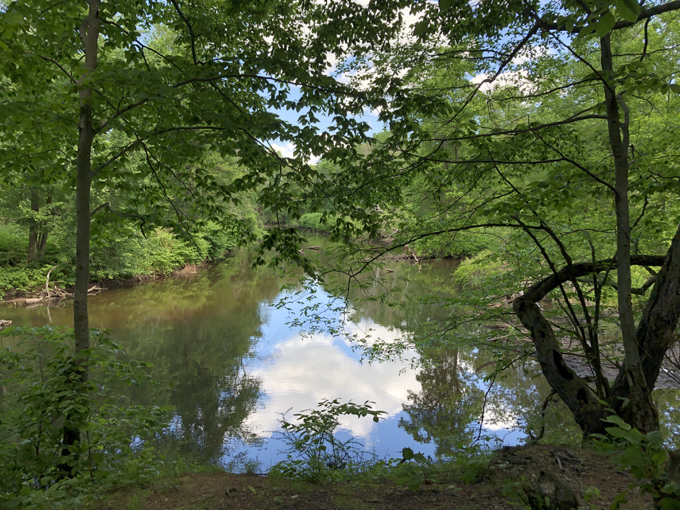 Continue on to Section 8, Middle School Trail.
Skip that noise and go right to Section 9, Laurel Marsh Trail in Manchester 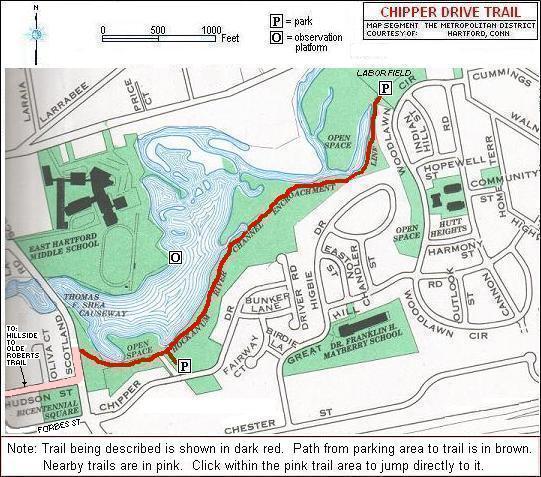