I imagine hundreds, if not thousands, of people hike through MK Wilcox Park in Bloomfield every year and don’t even know it. There they are, hiking north through Penwood State Park, taking in the panoramic views west and checking off abandoned chimneys along the way. 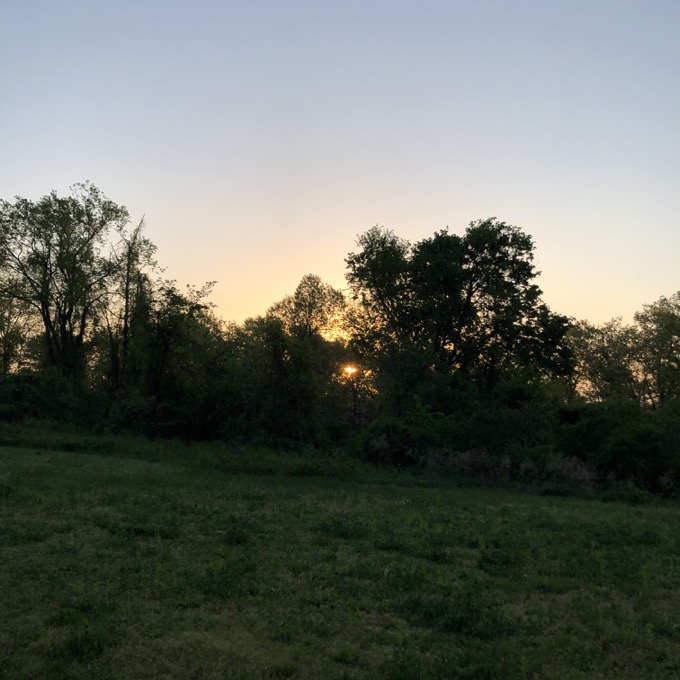 The next thing they know, they are rambling down off of the ridge and across the Farmington River to points north. (Oddly enough, that last little bit down the hill to the short road walk is actually Talcott Mountain State Park. Which is totally weird if you are aware of this area.)

I have hiked and written extensively about the vast array of trails that course up and down both sides of the Metacomet Ridge. There are dozens from Meriden to Suffield. Wilcox Park isn’t much different from others in Simsbury, Avon, and East Granby… but I recommend it for a reason I recommend a lot of Bloomfield trails. 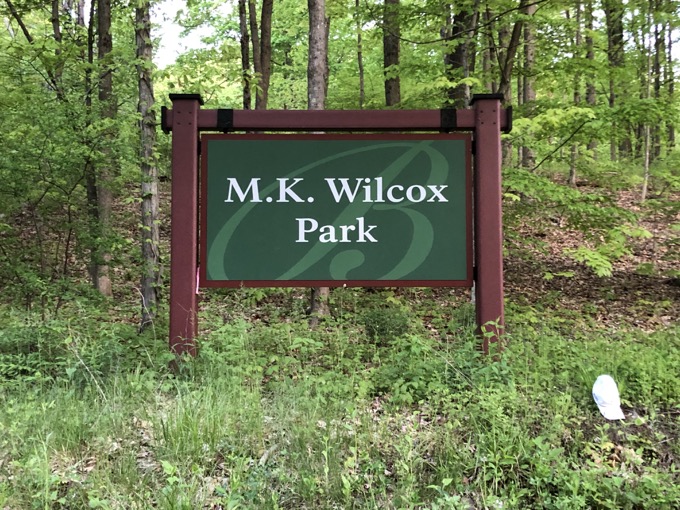 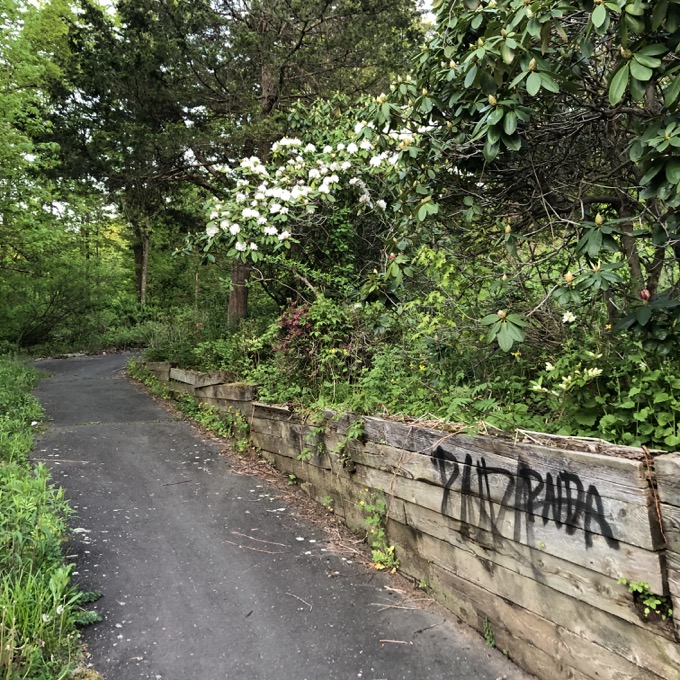 And that reason is because I can’t shake the idea that many people simply don’t know western Bloomfield. It’s wild, hilly, bear country out west! It’s exciting and relatively sparsely populated! I admit it, I’m weirdly obsessed with Bloomfield.

(Granted, I live a minute from its southern border and have been driving through it for a decade every day for work, and half of our take-out circuit is in the town, and… Okay, I get it. Not many people share my appreciation for the town. I’ll stop now.) 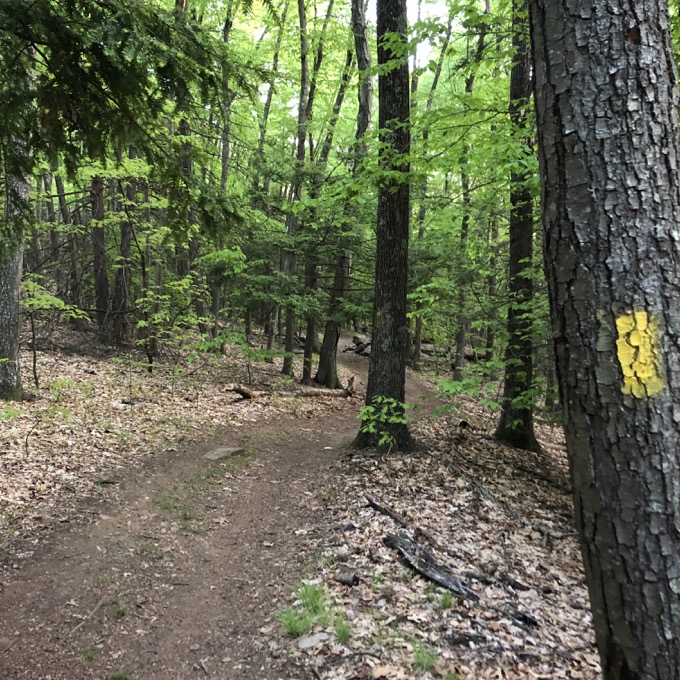 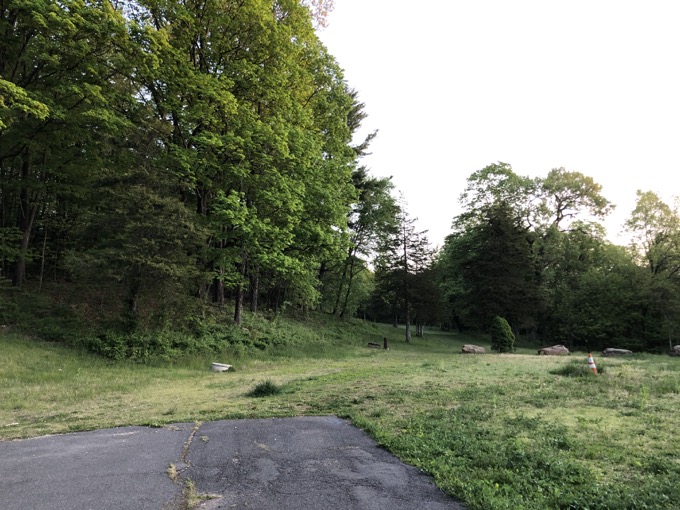 You can access Wilcox Park several different ways – via Penwood State Park and the Metacomet Trail north or south of course, but also from the western side of the ridge and some Simsbury access trails.

I’m a purist, so I parked at the hiker’s lot off of Hoskins Road and began my trek at sunrise. 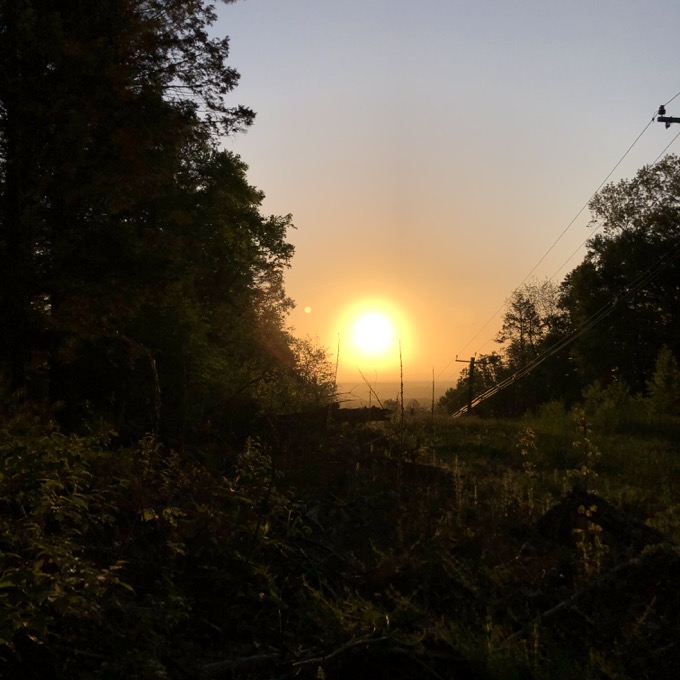 I’m guessing that Bloomfield figured this would be a family gathering place for town residents to “escape” and picnic. There’s an old paved road and path leading to a rather huge picnic field. I had no idea this was here.

The trailhead is on the far side of the field and once accessed, hikers have the choice of heading up to the top of the ridge via the Ridge Trail or ambling northward along flatter Chimney Trail.

I planned a loop via the Chimney Trail, with a detour on a red blazed path that winds up in the same place. Man, I love hiking at sunrise. 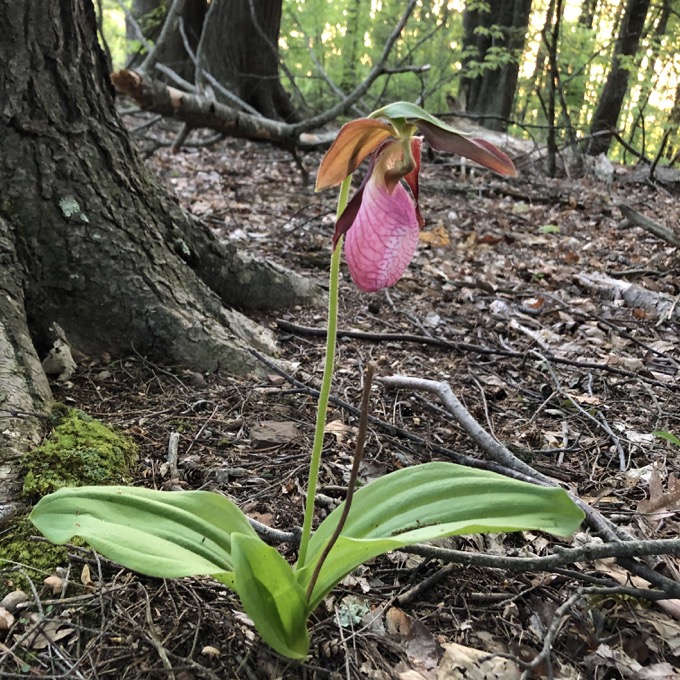 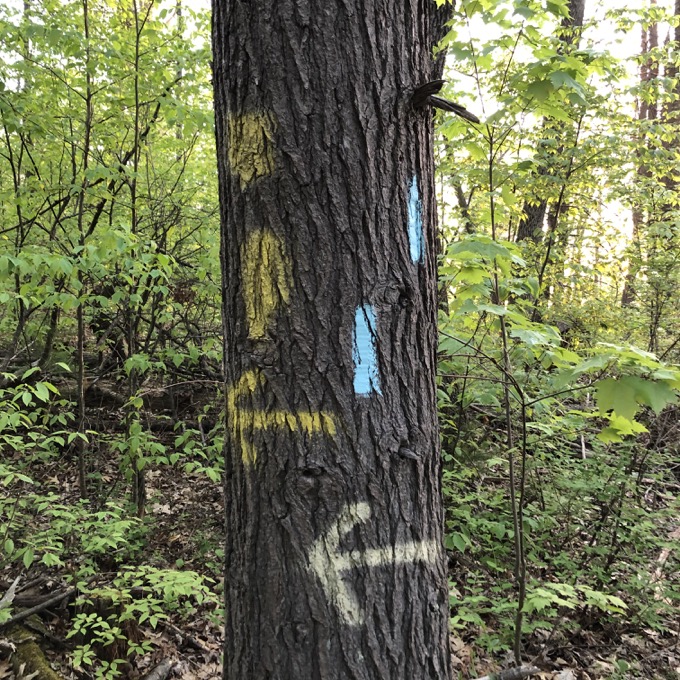 The red trail turned out to be a bit of a bust. It started out earnestly enough, but after some cool stone features, it petered out near the massive power line cut that cleaves this park. I figured there was nothing along that path of interest and returned to the Chimney Trail, heading north.

I wasn’t really too aware of mileage here, but found myself linked up with the Metacomet in fairly short order. Having hiked through here previously, I was really only interested in Wilcox trails and was initially confused when I continued following the yellow Chimney Trail – which is very well marked here – across the Metacomet to an abandoned chimney site and clear view of the Farmington River Valley. 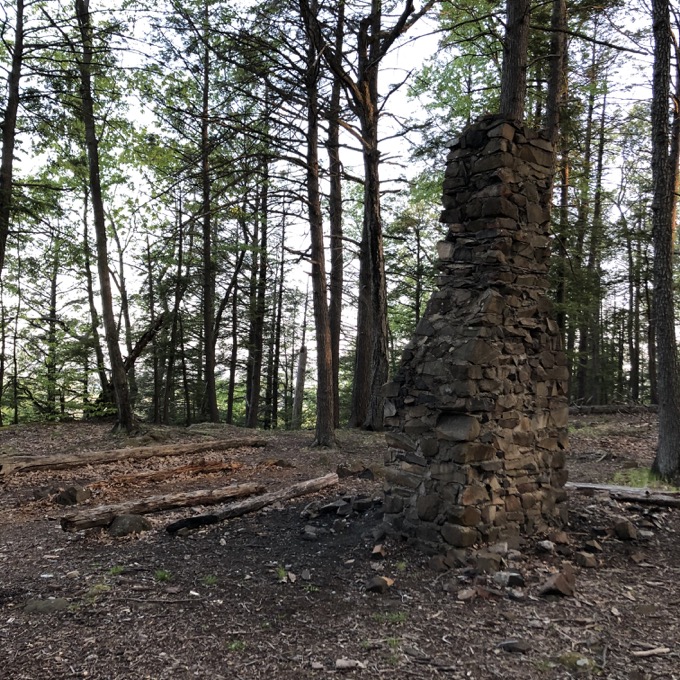 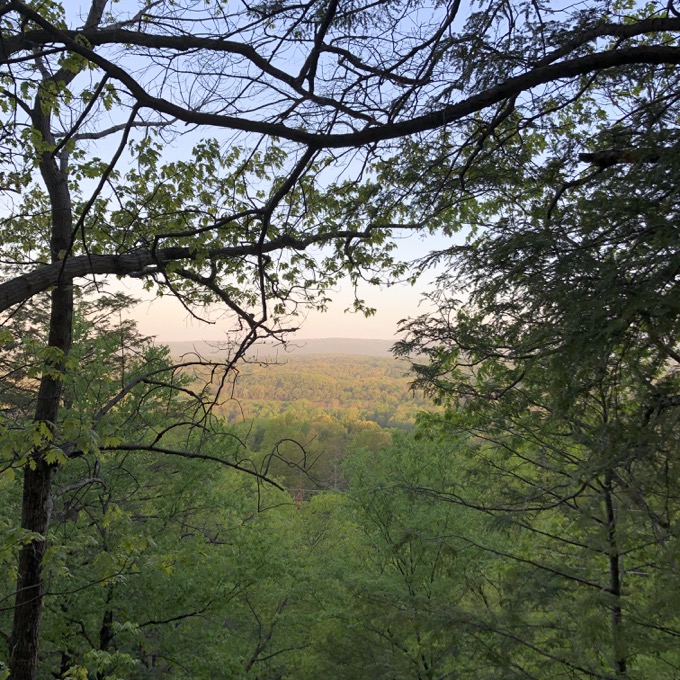 The “confusing” part is the fact that Metacomet purists will actually miss this site. Granted, they’ve seen this same view 20 times from Talcott Mountain and through Penwood, but still… this chimney and bench and view is all M.K. Wilcox Park’s. Pure Bloomfield… even if the Simsbury border is literally two feet away.

After resting for a minute, I continued south along the trail which is shared with the Metacomet. A few minutes later, at another nice view west, the other yellow trail – the Ridge Trail – heads east down the hill ultimately back to the picnic grove. 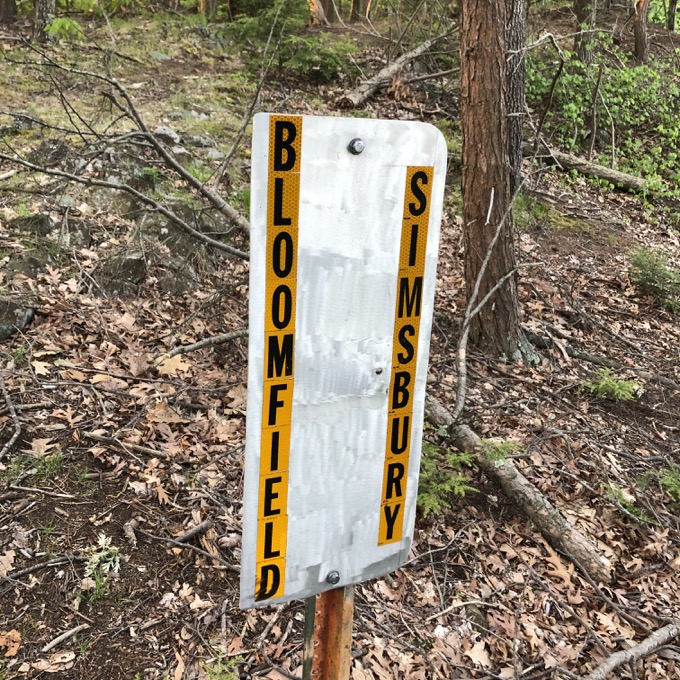 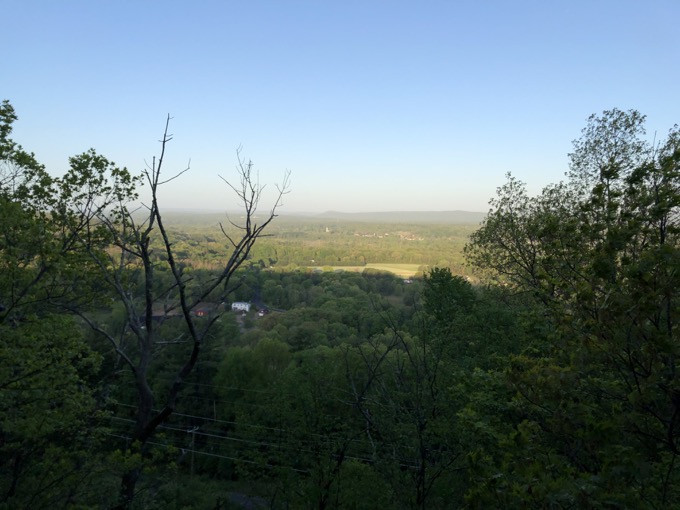 It’s not that steep, so if your goal is to park at Wilcox Park and get up to a view, go for it. There are a few switchbacks, but the climb is doable by most anyone.

And that was that. Well… almost. Because I sometimes have the mind of a nine-year-old, I found this sign’s placement funny: 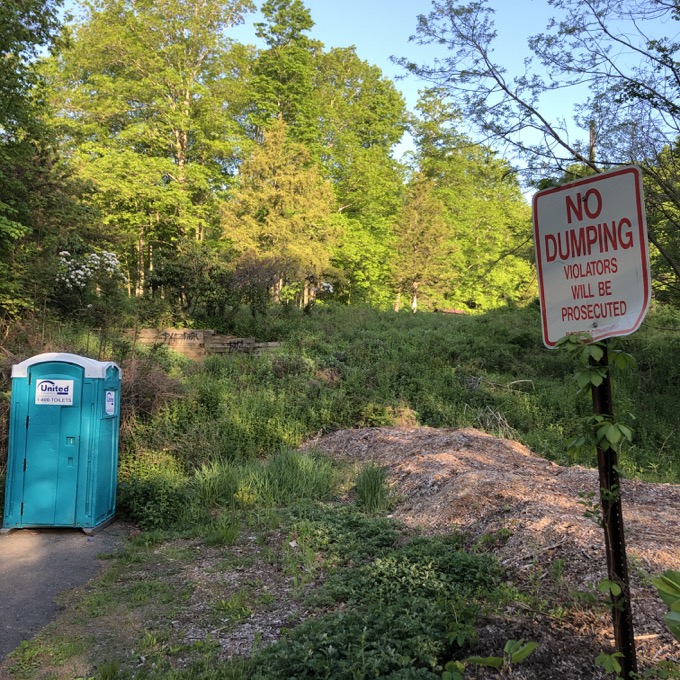 Sigh… I got in my car, picked up some donuts, and was home before anyone in my family had even gotten out of bed yet. What a great way to spend an hour! So I’m telling you… “no dumping” on Bloomfield. It has its charms, even if my juvenile jokes don’t. 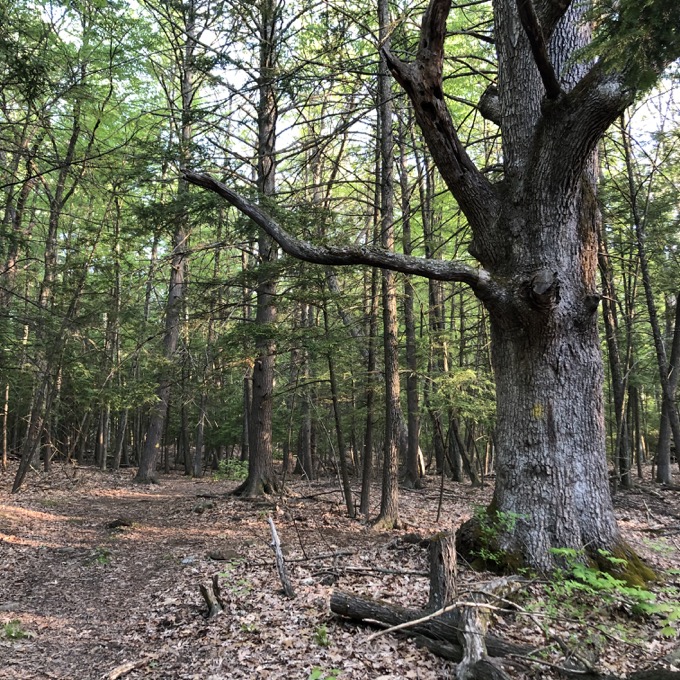