The Fairfield location that I visited has closed, but one is still open in Southington. I’m sure it’s the same. The original proprietor has passed away since this was originally written.

Let’s dispense with the caveats off the bat: I am not Catholic and I never was Catholic. I don’t mean to offend anyone with this post. The store owner was cool with our visit and didn’t seem to have a problem with us having some fun in his store. And let’s face it… purple silk robes are always fun. 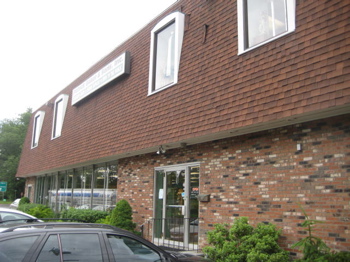 As a pure curiosity, this place is awesome. It’s one of those stores you knew in the back of head must exist, but you had no idea where it was or what it would be like. And now, at least I know.

Equal parts surreal, confusing, funny (yes, funny… to me anyway), beautiful, and spiritual, Patrick Baker and Sons is one of the preeminent purveyors of church goods in the region. The store has been around for about 50 years and there’s clearly a market for this stuff. 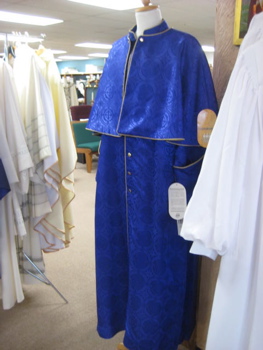 In 1965 the Baker enterprise was founded by Patrick A. Baker, a native of Dublin, Ireland, The firm was located in Hartford and began as a church supply company servicing a great number of churches in the Northeast. Over the next 20 years, the company added catalog service and an Ecclesiastical Art Division. They have locations in Fairfield and Southington and serve the entire northeast’s needs for all things religious.

And I don’t mean just the bibles and hymn books and the stuff your local religious stores have. I’m talking EVERYTHING like all the flowing robes for priests and altar boys and little Cherub Choirs – of which I’m an alumnus, by the way. I also played bells too – give it up for the Presbyterian Church of the Covenant (Wilmington, Delaware) handbell crew. 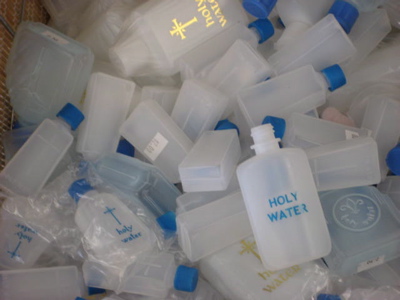 I had no idea they actually sold special cheap plastic bottles made in China for this. Awesome.

Yes, Patrick Baker & Sons sells bells. And giant crosses and arks of the covenants and wooden statues of bible folk and all the various accoutrements of holy communion and baptisms. The store is two floors and way bigger than we thought it would be before arriving.

That’s right, I wasn’t alone. I was with Rob and Yvonne, who had joined me for a full day of CTMQ’ing in Fairfield and Norwalk. After some initial trepidation, we roamed the store freely and absorbed all it had to offer. (I was feeling a bit skittish about taking pictures in the store… I didn’t want to offend anyone, nor did I want to explain why I thought this place was CTMQ-worthy.)

I shouldn’t have felt that way. After all, I had read about the place in Michael and Jane Stern’s 500 Things to Eat Before It’s Too Late of all places. If they found it noteworthy enough to warrant a full page in their book about food, it should come as no surprise I paid it a visit. (It should be noted that the Sterns happened upon the store while on a trip to eat at the nearby Super Duper Weenie. 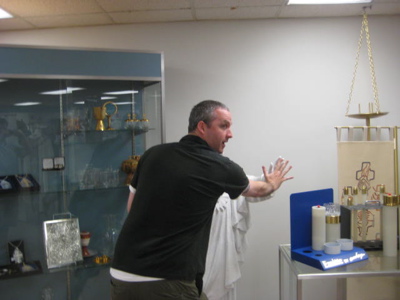 Some choice excerpts from the Sterns’ book:

“Here you can buy… palm ashes for Ash Wednesday, [and] red wine stain remover for sacramental accidents. Baker also operates a thriving church renovation business that can do everything from polishing old pews and restoring faded murals to supplying brand-new marble work, gold leaf and mosaics.

Most of the upstairs ecclesiastical showroom is occupied by clerical garments, including gold-brocade chasubles and mitres that look grand enough to be a cardinal’s Sunday best…

… We were fascinated by a front-lawn Madonna that comes with strict strictures about proper installation: WARNING! Grotto must be filled with 30 to 40 pounds of concrete or 30 to 40 pounds of gravel. ABSOLUTELY no sand or cat litter!”

Who knew? (And who knows what the heck a chasuble or mitre is? I don’t.) 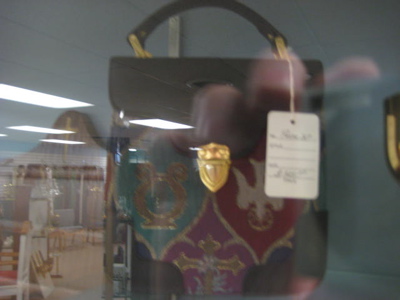 Some sort of Priest Murse

What struck me most about the store was how expensive some of this stuff was. Sure, everything is more expensive in Fairfield County… But I don’t think location is driving the prices here. It’s more like a respectful monopoly. Sort of like Boy Scout uniforms – only one company makes them and no matter how lame they are, they can charge whatever they want. Some of Baker’s prices blew me away… The polyester robes were in the hundreds of dollars. Guess how much this two-piece two-foot wooden cross that my dad could make in 10 minutes costs: 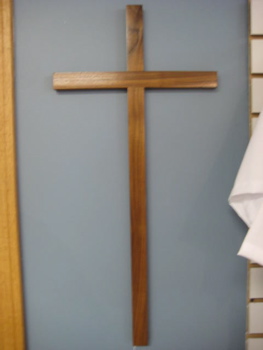 Not even close. Here’s the price: 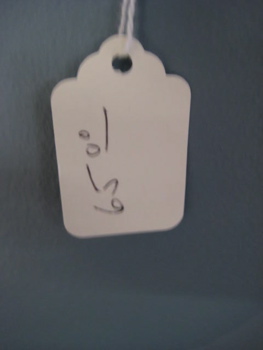 Need more proof? (This is where I’d link to their catalog but due to “link rot” and my wish to never update this page again, I’ll just have you search for stuff on your own at their website if you really wish to know how much all the stuff at Mass costs.) 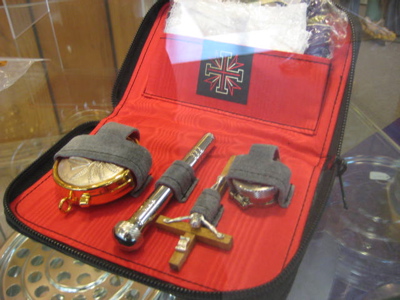 Rob told me this was a traveling “last rites” kit and not a high-class intravenous drug user’s works.

What’s stopping someone from entering this market and price-cutting? Even if only by 10%, there still a huge profit margin I’m guessing. It’s not like they have to be kosherized or blessed by the Pope or anything, right? I’m sure this stuff is the highest of quality – even the polyester smocks.

Patrick Baker & Sons is a unique store to explore. No, we didn’t buy anything, but Yvonne declared it was her favorite stop of the day – a day which included six museums, three unique stores and three restaurants. I’m not sure what that says about Yvonne, other than now I know why Rob asked her to marry him.

At least now I know from where to get them a wedding gift. 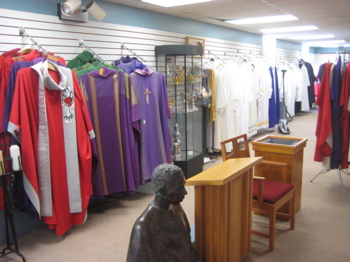