Way back in the day, I worked for Aetna in Middletown. Very near there, on the border with Berlin, up sprang the Pistol Creek golf course in 2001. I’m not a golfer, nor will I ever be, but I do recall people being fairly impressed with the course. It looked nice enough while driving by. 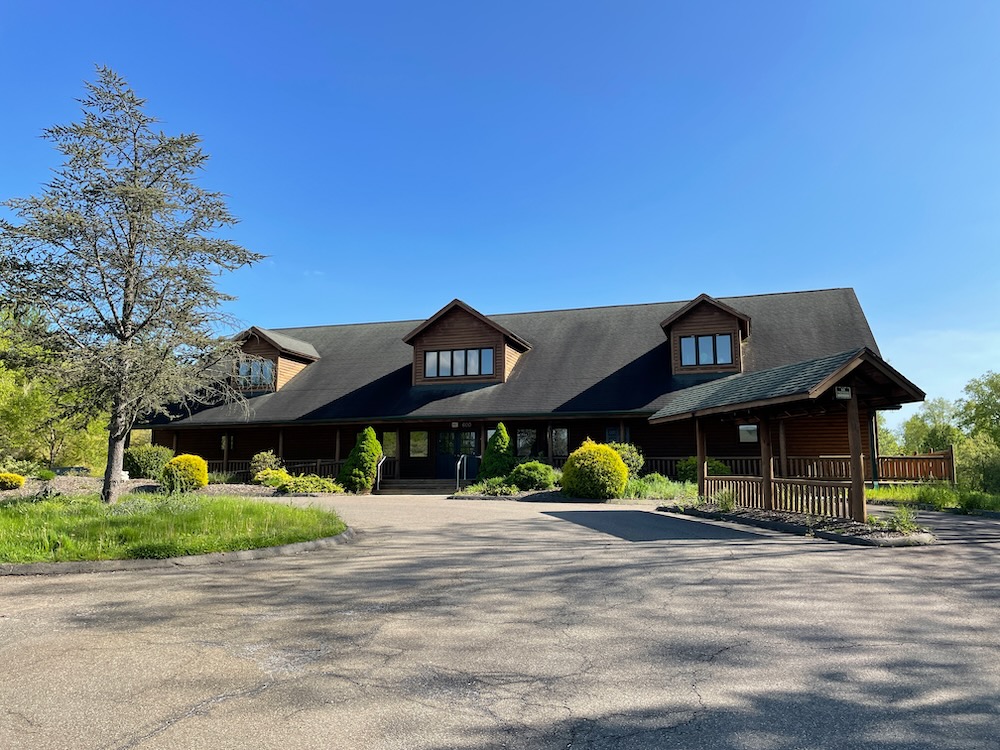 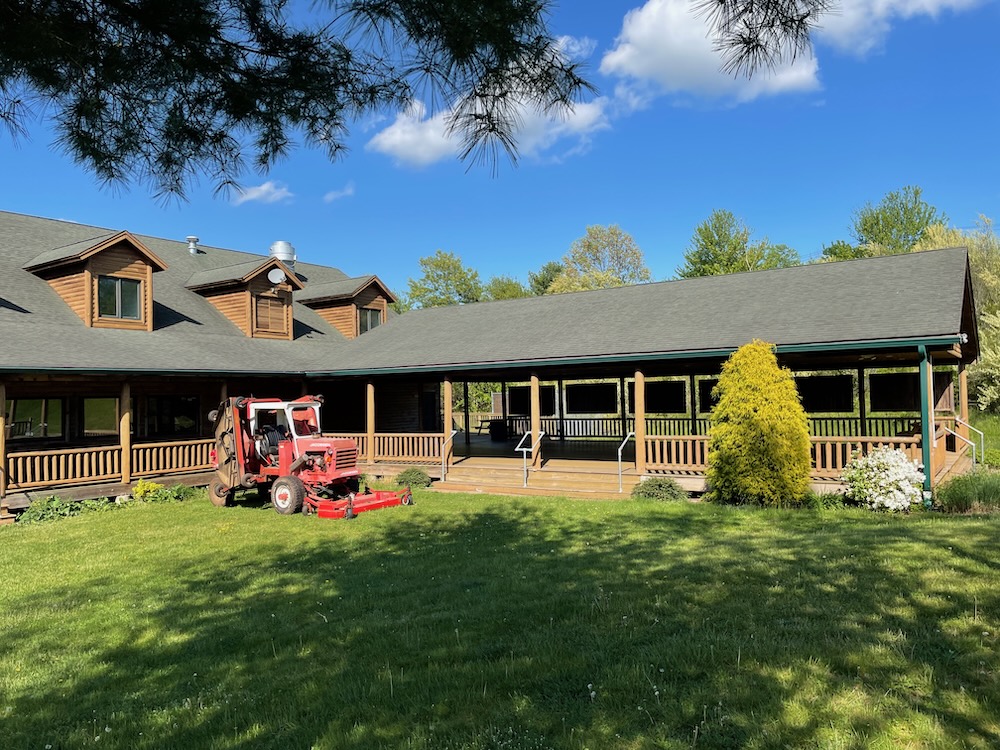 Those were the heady days of Tiger Woods and golf’s explosion beyond the usual wealthy old boy’s networks and such. Lots of new courses were cleared and built. And since that time, many of them have closed. Such is the case with Pistol Creek.

The ebb and flow of business, I suppose. I’m no fan of golf course ecology, so I found an old article on Pistol Creek from the New York Times interesting.

There are many challenges to building a golf course in Connecticut. Undeveloped land is hard to come by in those sections populated well enough to support a course. It took James Gentile three years to assemble the 160 acres in Berlin and Middletown where he plans to build his daily-fee course, Pistol Creek, with land purchases from five different owners.

“They’re going to have a more difficult time finding land in Connecticut because of the terrain, the hills and slopes,” said Stephen Kay, a course architect based in New York.

Adding to that difficulty, some say, are growing environmental concerns, which make Connecticut one of the toughest states to build new courses on. 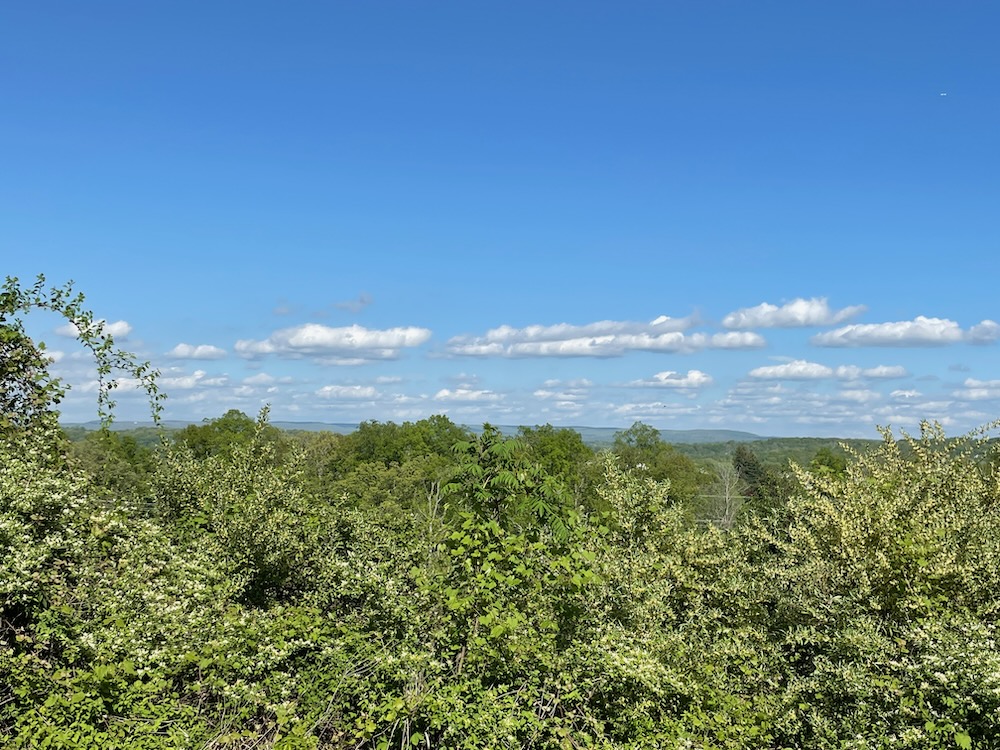 I have no idea why Pistol Creek ceased operations. There was a lovely clubhouse… heck, there is still a lovely clubhouse, which can be rented from the town of Berlin if you want. But now all that remains are the paved cart paths, which are free to walk along. Nature has returned and there are huge swaths of the property that bare little resemblance to what this place was just 15 years prior to my visits.

Yes, visits. Most available maps of Pistol Creek only show the north, or, Berlin parcel. So when I walked the paths on a frigid January day, I didn’t even realize I’d only seen half of what was available. And since I’m a completist, I returned on a picture perfect May day to complete all of the paths here. The two separate hikes were more different than I expected. 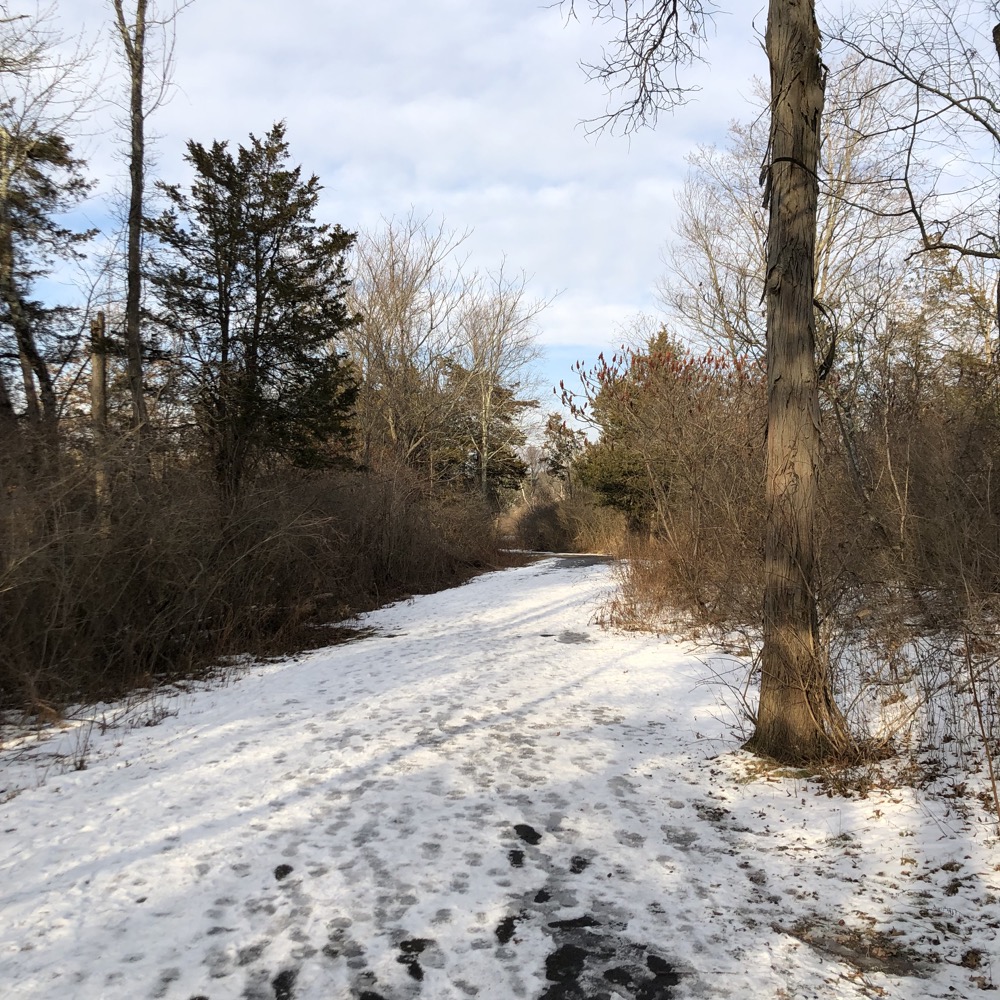 There are more than 4 miles of paved trails in total here and in my two visits, it seems that the large majority of people stick to the northern paths. The parking lot is at the former clubhouse on Spruce Brook Road in Berlin.

The paths are really nothing more than meandering ribbons of asphalt around half a former golf course. The land and vegetation still clearly show the scars and vestiges of its former life, but lots of shrubs and smaller trees are starting to fill in. 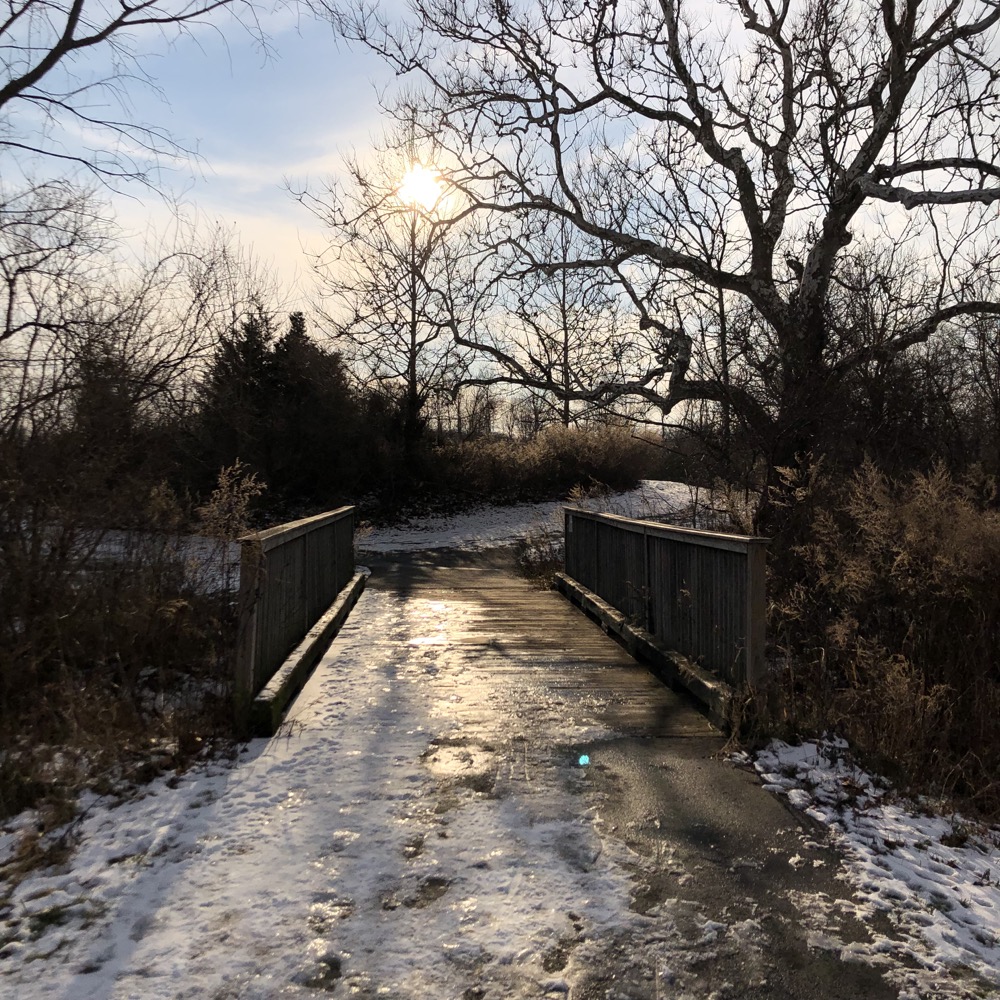 In January, there wasn’t too much wildlife for me to assess any sort of rebounding on that accord, but what’s there now is clearly better than what was there before. You won’t be surprised to learn that a developer wanted to turn this place into condos and giant ugly houses in 2006 or so. Efforts by the residents of Berlin spurred the town to purchase the property in 2008, thankfully.

Several stretches of the paved paths were dangerously slippery with ice. I was amazed to see a few elderly people out walking their dogs here in such conditions, as there were a few spots that I could not find safer passage than sheer ice. 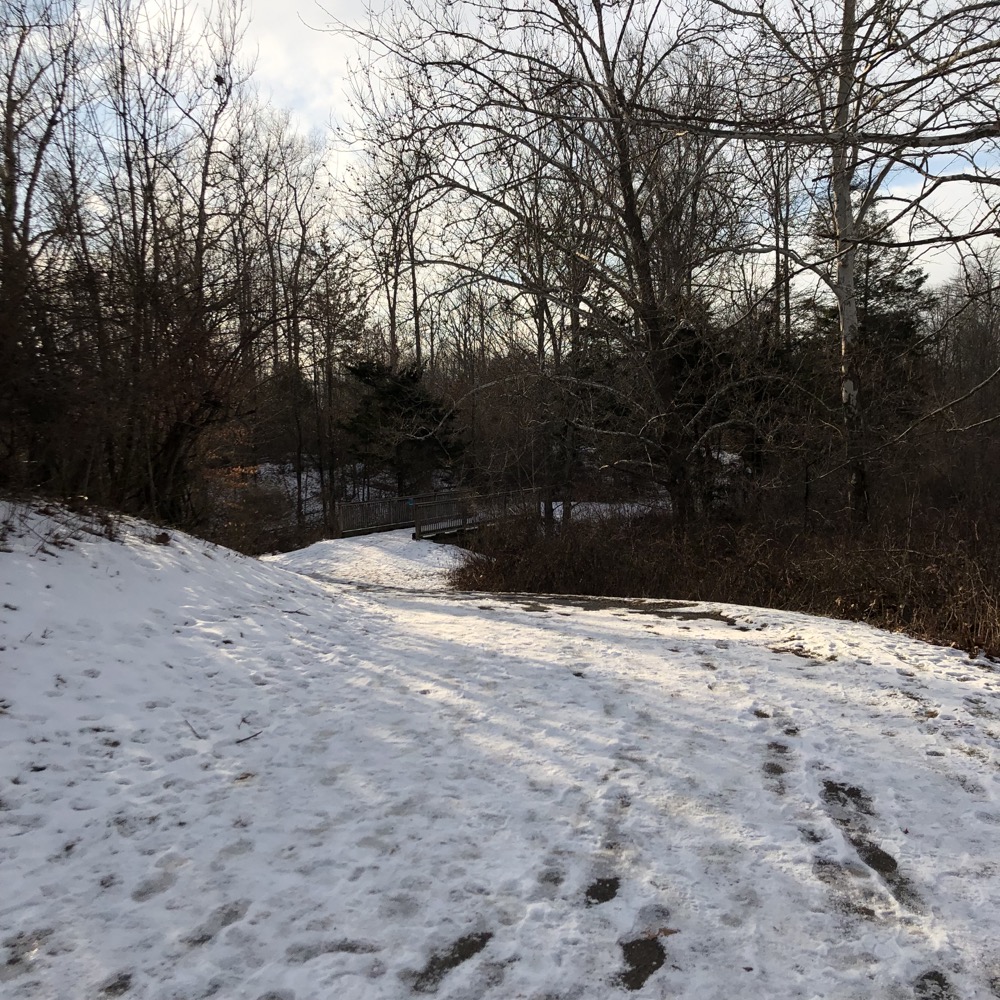 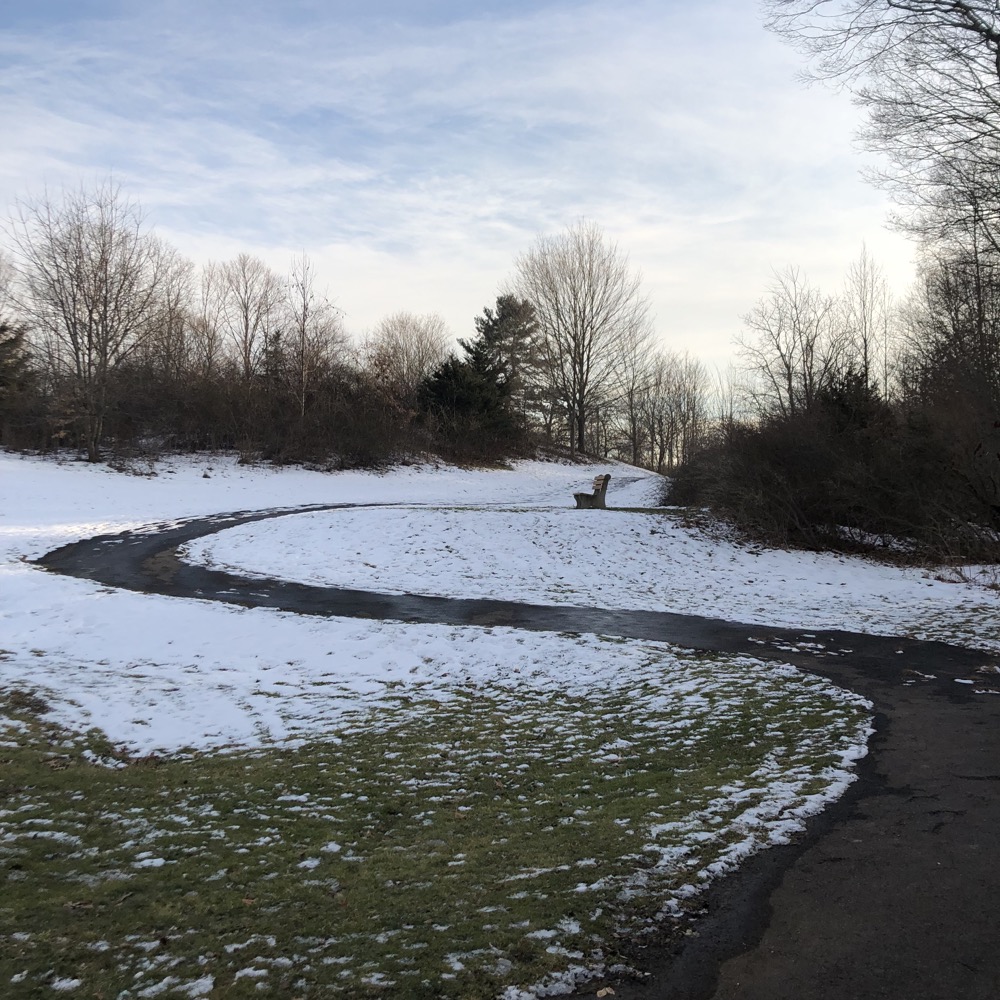 This was the front nine of the golf course, and there are still sand traps and unnatural hillocks along the way. Tee boxes are also still discernable and, well, that’s just the way it is when hiking a former golf course.

Over on the western edge, the path enters a more forested area above a small ravine containing Spruce Brook. It’s nice enough. Rumor has it that an official path will connect Pistol Creek here over to Sage Park for a longer walk option. I returned to the parking lot and left… again, not even realizing I had only seen half of the place. 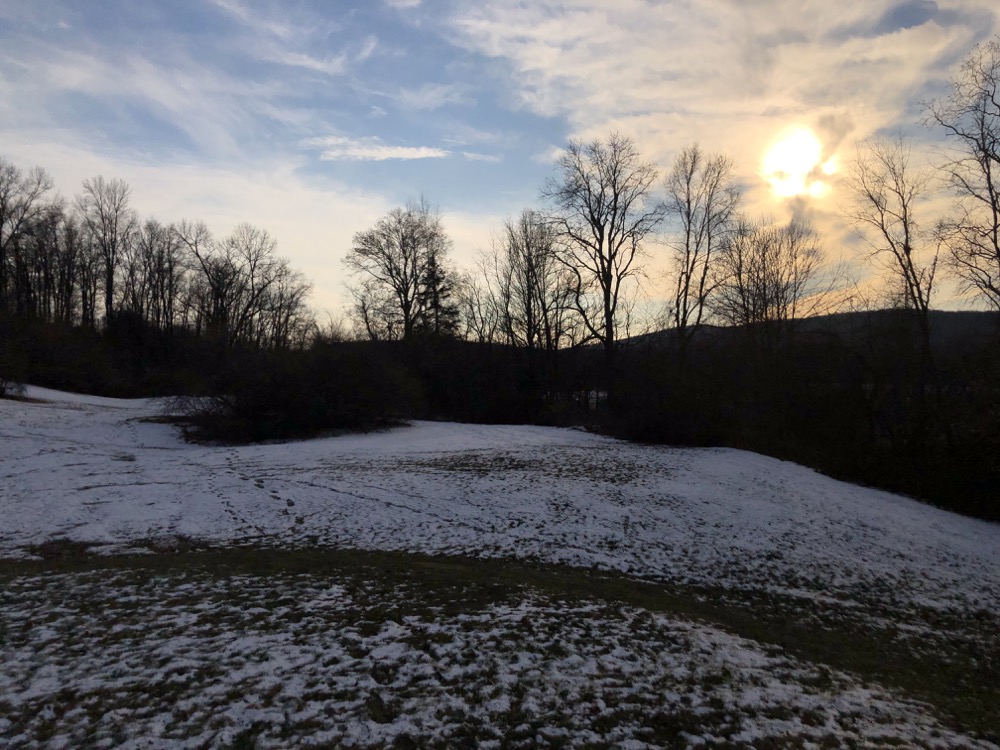 When I sat down to write up this place, I had a nagging voice in my head that I’d seen somewhere that there was more to it than what I’d seen. I poked around online and finally found a map and description of the southern back nine. A return was necessary.

And I’m glad I made it happen. This half of Pistol Creek is infinitely prettier and “wilder” than the other. It’s also way hillier and frankly, as I walked down and up… up and down the slopes, I wondered how in the world golf carts were able to handle these pitches. 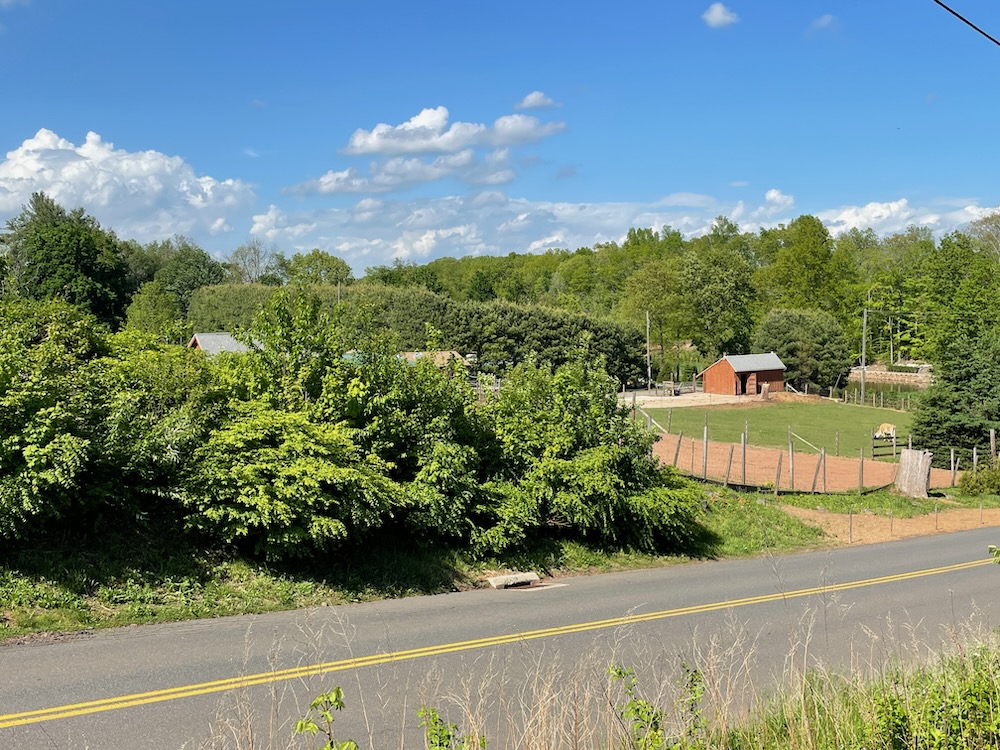 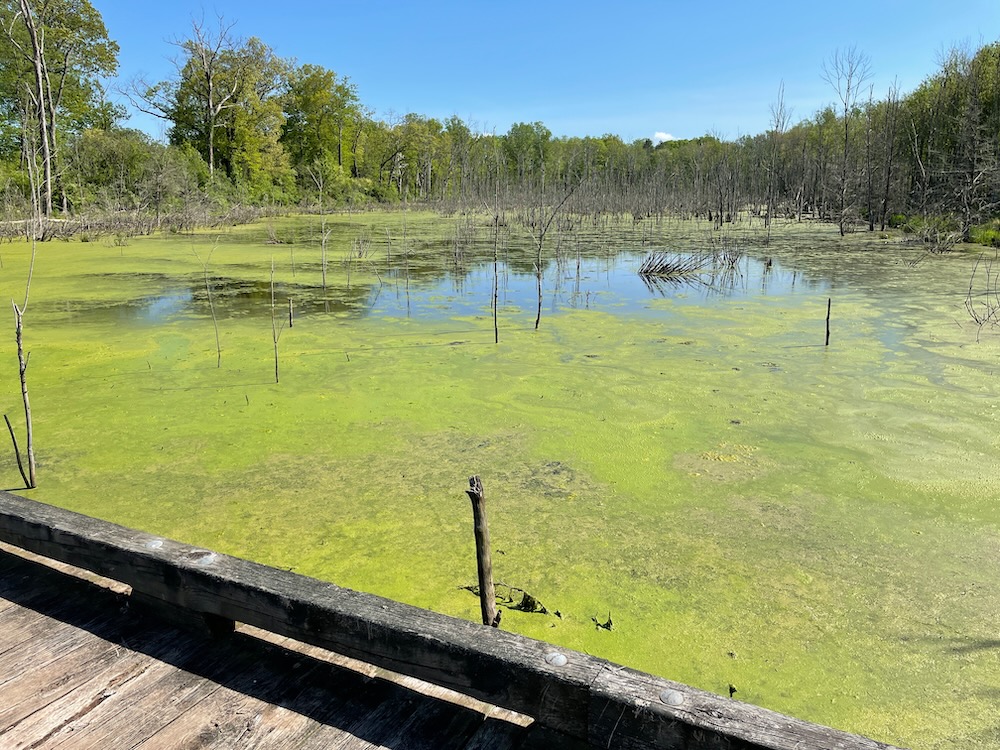 There are some steep grades over here across Atkins Street. There are also nice views to the east, out over my former place of employment (which was razed and is now home to a massive FedEx distribution facility.)

Once down the hill, the path skirts a large pond and then crosses it via a long bridge. It’s really very pretty and does not feel like a reclaimed golf course at all. Secondary ecological succession is well underway with some mature fast growing trees like birches and such. 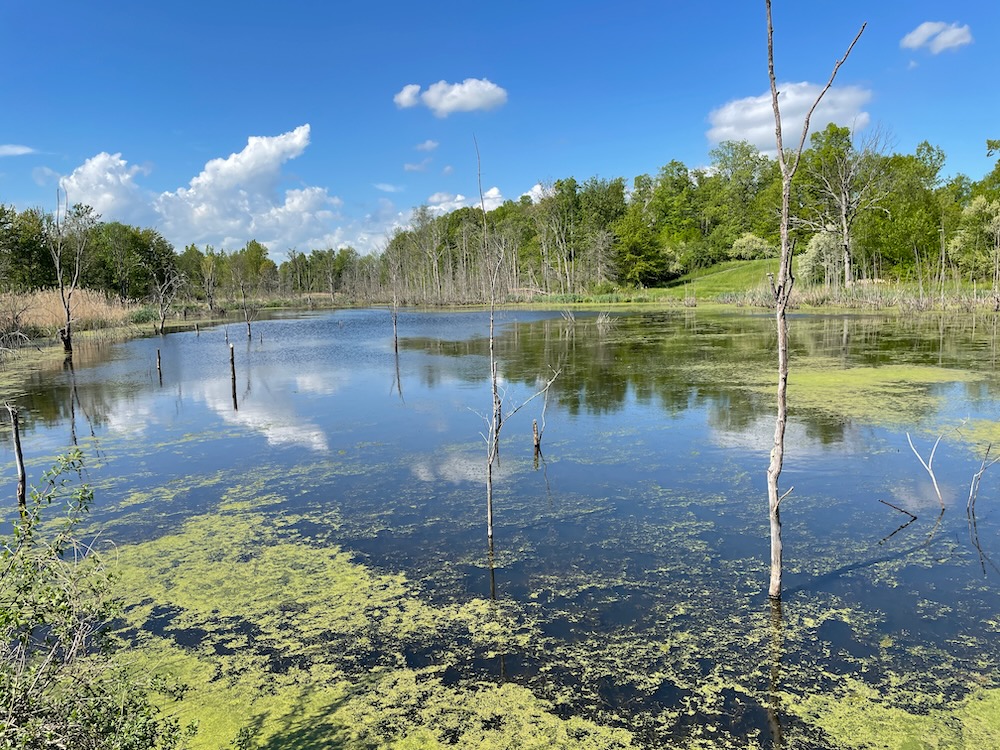 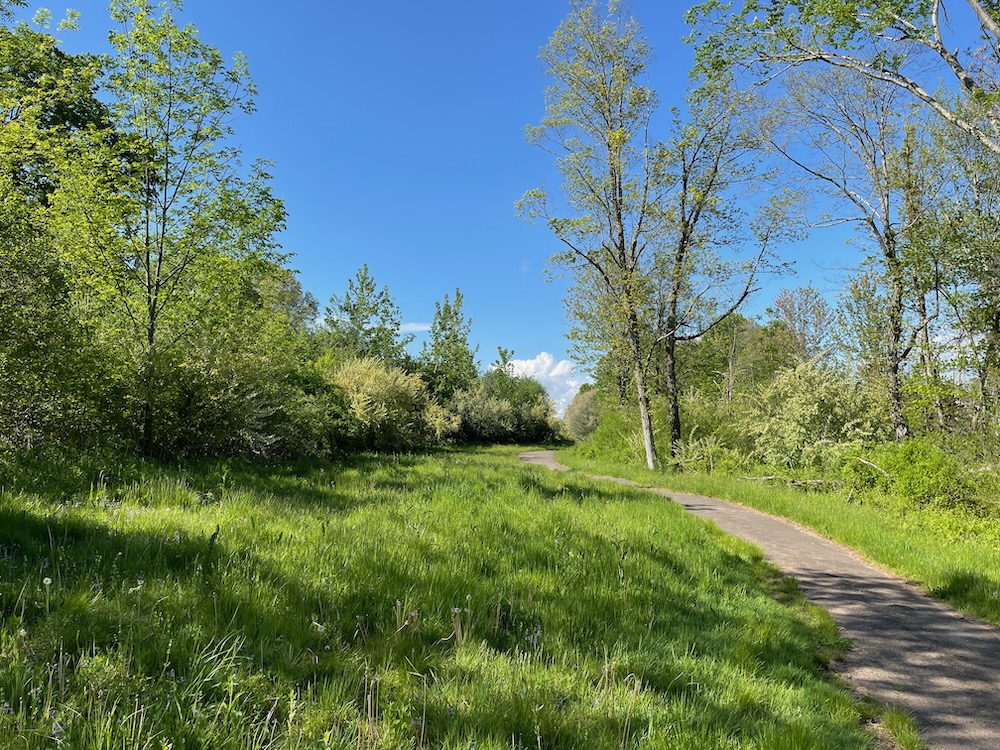 After the pond, the trail weaves around through a forest and then steeply back up to Atkins Road. There were a ton of birds over here and I saw more goldfinches in half an hour than I usually see in a year.

Back across Atkins Street and after a curl south, the path pointed me north back towards the clubhouse. If you’re walking an old golf course, you may not expect hills. If you don’t want hills, stick to the north half of Pistol Creek.

The trade-off is that there are no views along the northern half and it just feels like you’re walking on an old golf course. It’s your call… I hope your legs and lungs are up to par. 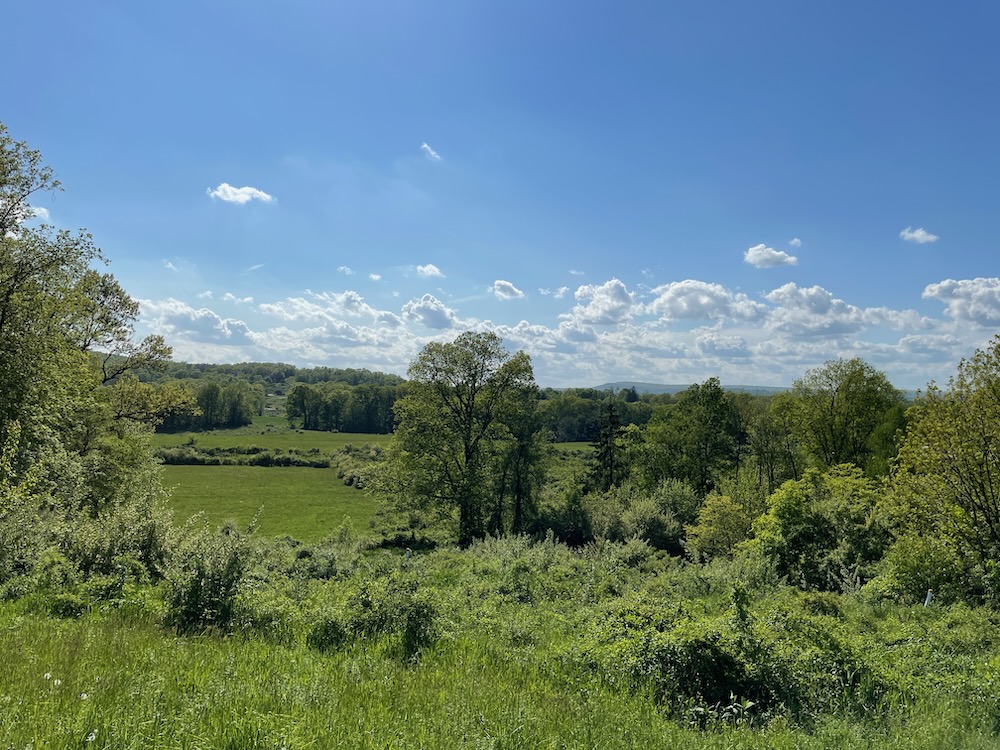