I’ll apologize up front. This is one of those pages that I put together for me and my wife to look at in twenty years when we’re reminiscing about our sons. So yes, there are two videos below that we both love but which you all won’t give a rat’s patootie about. It’s my website though, sorry. 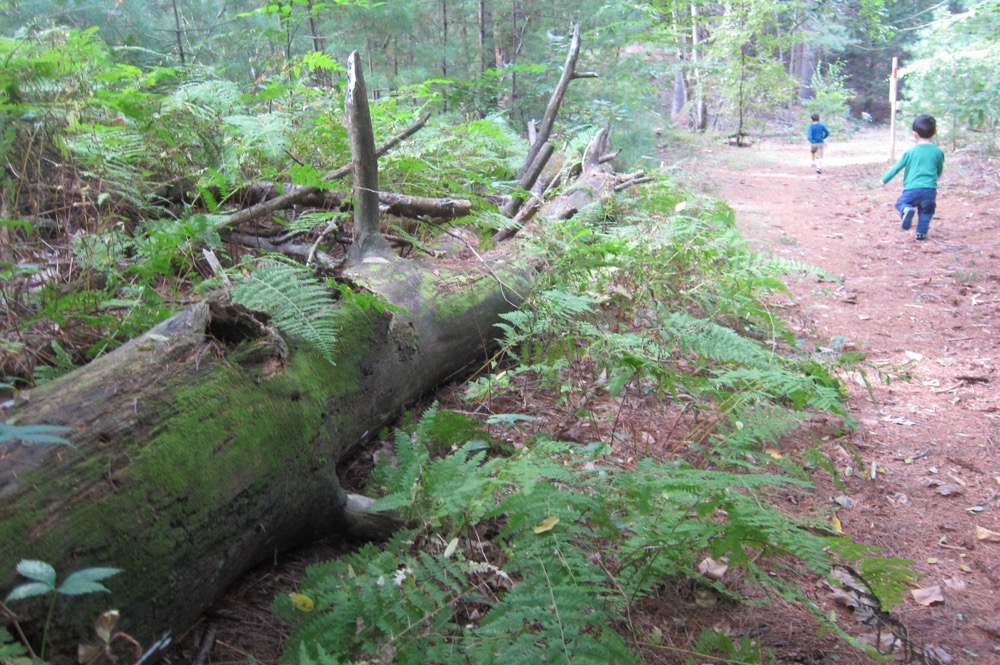 These were the days when my older son Damian was still somewhat active and would join us for hikes. When my younger son Calvin was old enough to hang. In other words – and I knew it at the time – this was the sweet spot for the three of to enjoy Connecticut’s woods together.

(Damian’s Smith-Magenis Syndrome meant that there was no way he’d be doing these hikes in his pre-teen and teenage years, and at some point, Calvin will probably have better things to do.) Knowing all of this, I would take videos of them on our little jaunts. I’ll say it… my boys were really cute little buggers. Here’s one now:

and – what the heck, here’s another video:

Damian was seven and a half in that clip. I forget how verbally limited he was at that age.

Simsbury is a great place to take kids hiking. All of the land trust trails are relatively short and there’s a good range of flat and easy walks as well as some steeper and more challenging ones. Wagner Woods is very flat, the trails are wide and well-marked, and it’s just a nice piece of property in which to poke around. 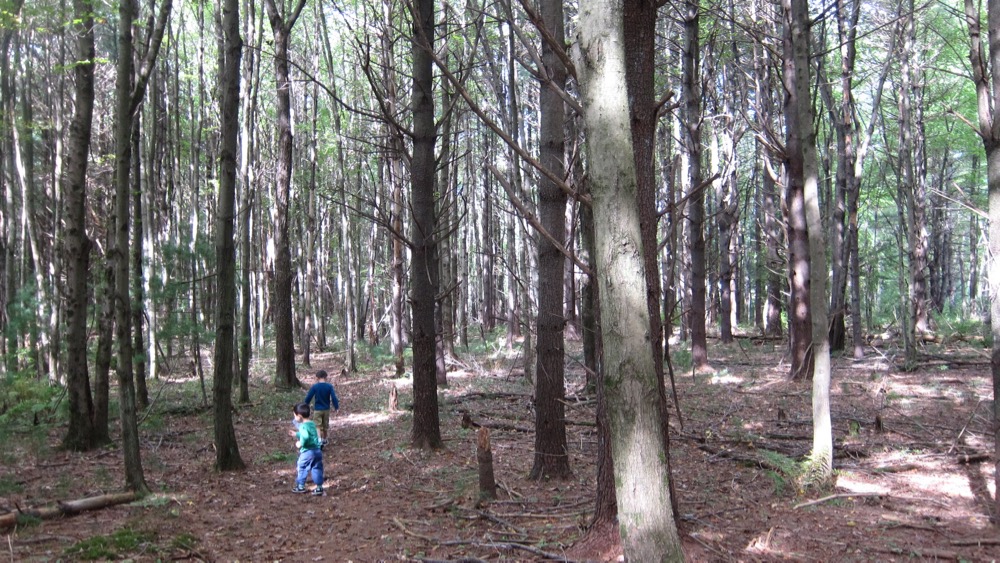 I parked off of Great Pond Road across from Great Pond State Forest. I’ve written about the CFPA’s East-West Trail that may or may not become reality before I die, but getting across Simsbury is pretty much the only section that I am not sure about. One route would take it through Great Pond and perhaps over to Wagner Woods and then up Lenora Drive and into the West Hills and beyond.

We shall see. Maybe.

For now, it’s me and my boys rambling around the SLT’s Wagner Woods property. 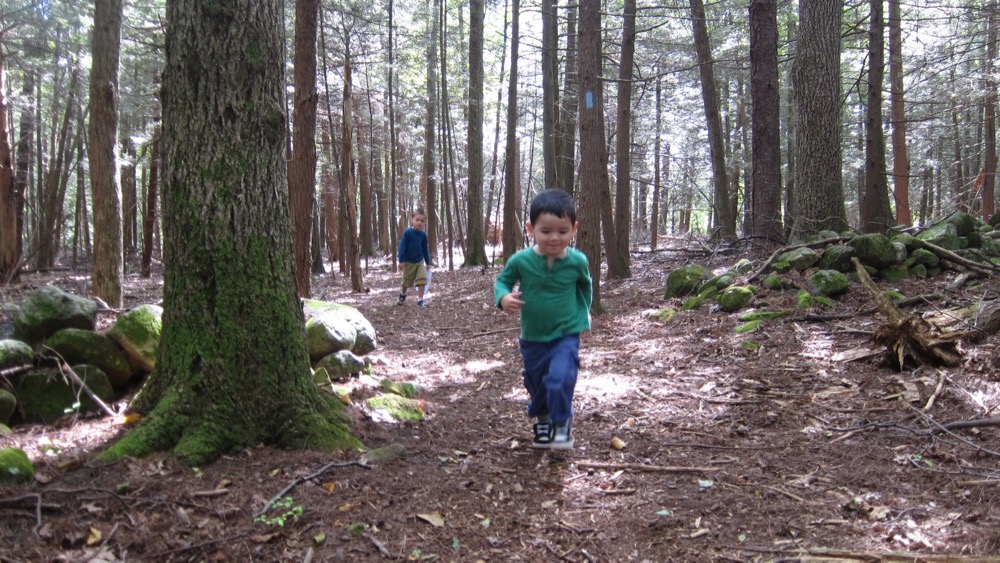 This diverse 63-acre property contains a succession forest, wetlands, including several vernal pools, and an eight-acre hayfield, and is home to numerous wildlife species including at least 60 species of birds. The sheltered blue trail ambles through a cool forest of mostly pines, oaks and maples. Numerous stone walls attest to the property’s previous life as a farm. On the northwest corner of the large hayfield there are remnants of the farm building foundations. The nearby stream still shows traces of an old dam. A large population of bluebirds takes advantage of the many houses placed on the edge of the field and red-shouldered hawks are often seen gliding above. Another remnant of farming days is the “two-wagon” wide laneway (orange trail) that leads from the southern end of the field down to Hop Brook. The purple trail (0.3 miles) will take you through a wooded area along the edge of the Hall Farm property to Old Farms Road. 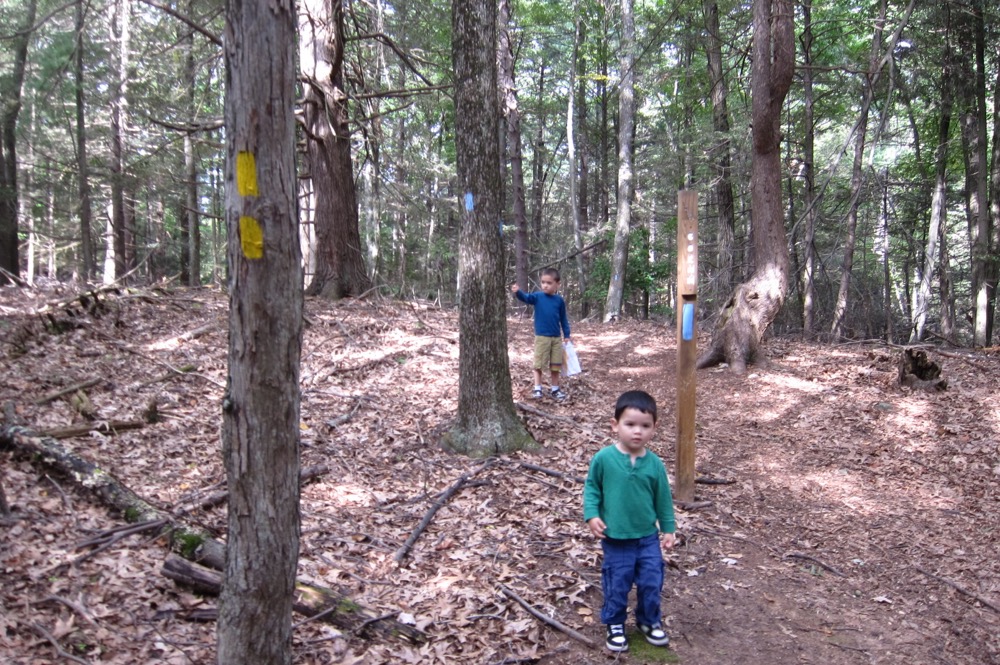 This was one of those true “nature trail” hikes for us. Both boys were engaged and interested in the things we found along the way. This was also back when younger brother Calvin followed Damian everywhere – even when it meant leaving the wide, flat trail and bumbling into the woods. That’s how Damian rolls sometimes.

And sometimes Calvin falls down. 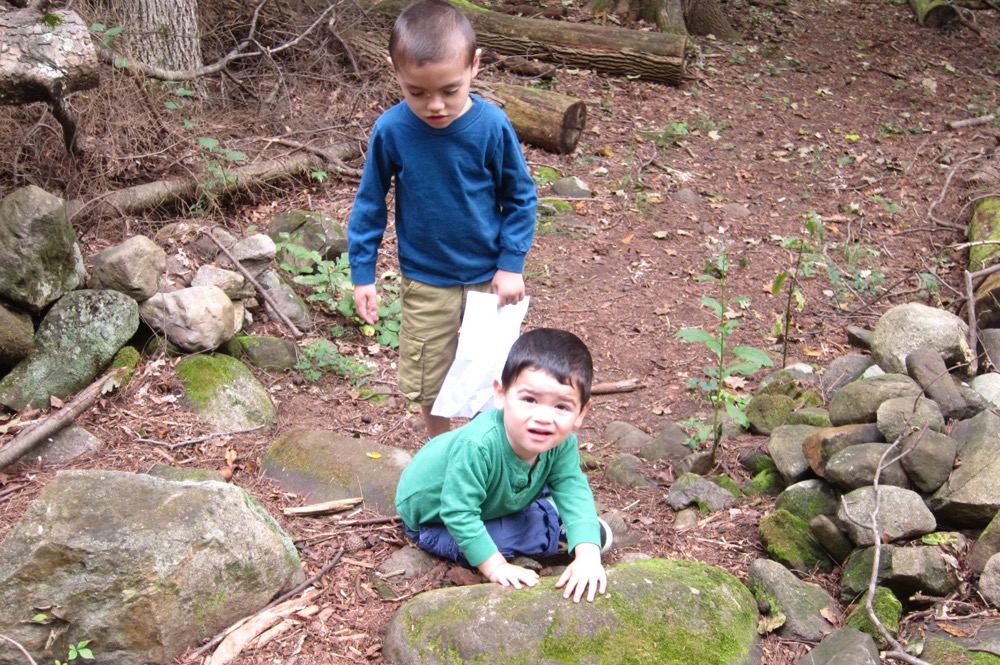 Like the nearby Great Pond, Wagner Woods has a large white pine plantation feel in places. It’s lovely. We found some lush moss: 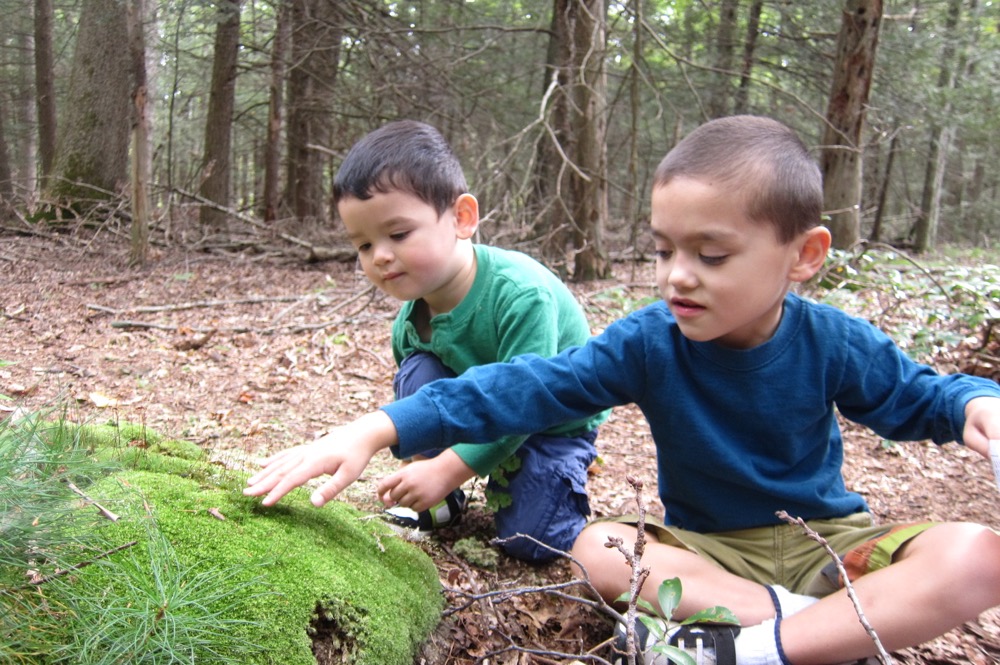 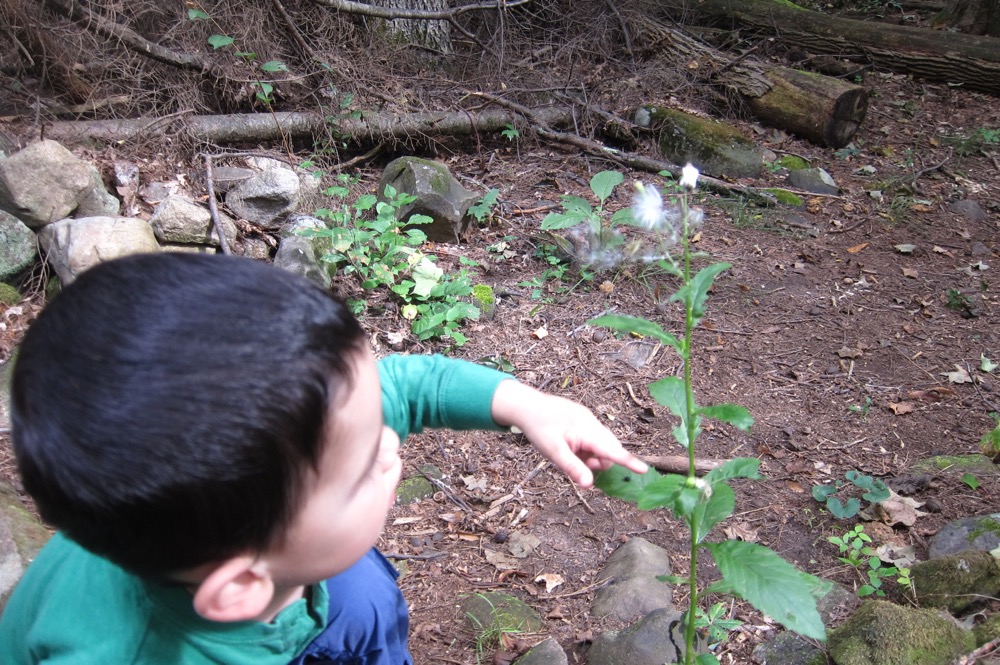 And a cool tree with who knows who inside: 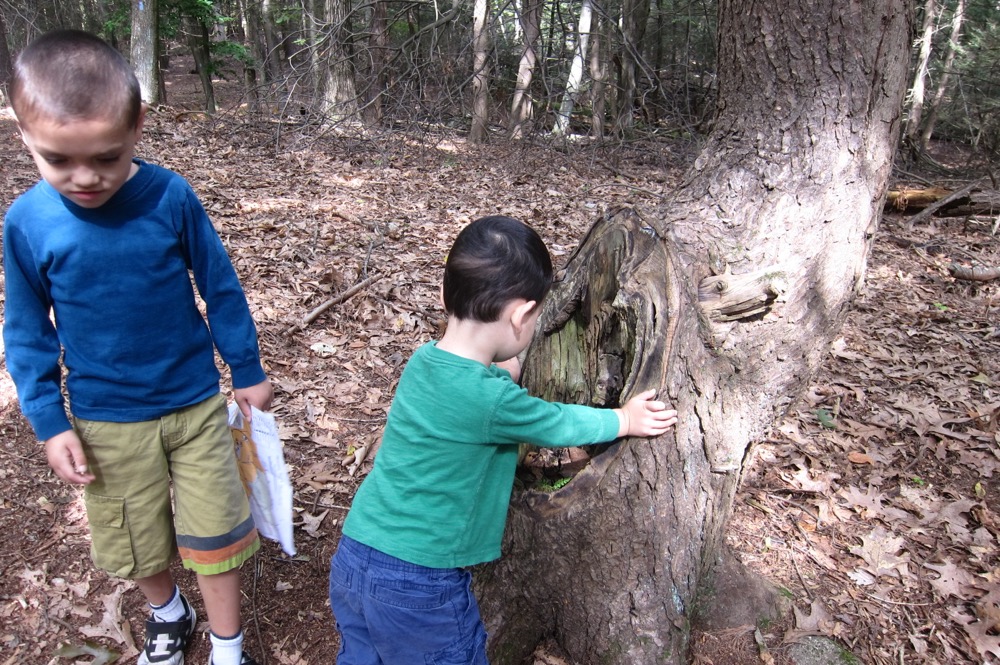 There are technically five trails here (Red, Yellow, Orange, Blue, Purple) but they total to less than two miles and all sort of flow into each other anyway. But they are varied! You’ve got woods, you’ve got a nice stream, and you’ve got a big field! Yes, Wagner Woods is one-fifth field. 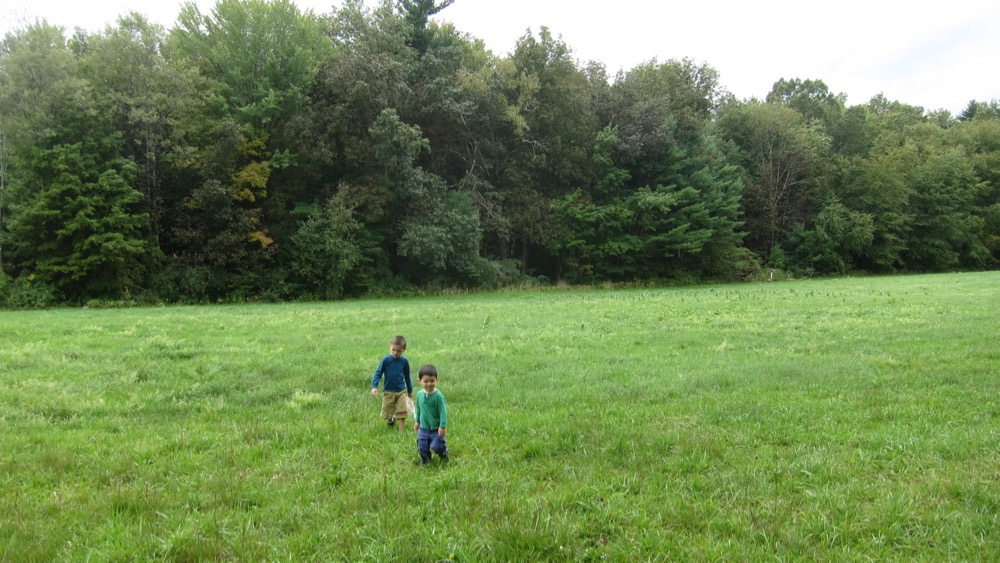 I like a good field walk. I’ve written it before, but I’m the rare Appalachian Trail hiker that enjoyed the fields of Virginia and Pennsylvania. They were different (and easy) which I liked more than I disliked the bugs, heat, and boredom inherent in field hiking.

So while I worried about ticks on my boys, I also enjoyed the different type of environment for them to explore here. And they found a big fat American toad! 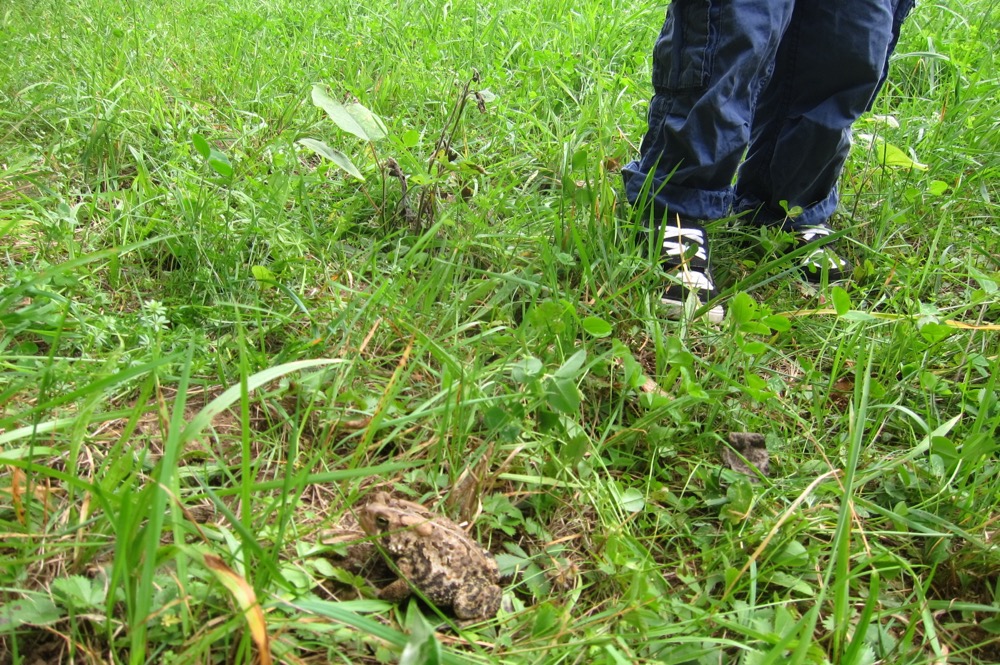 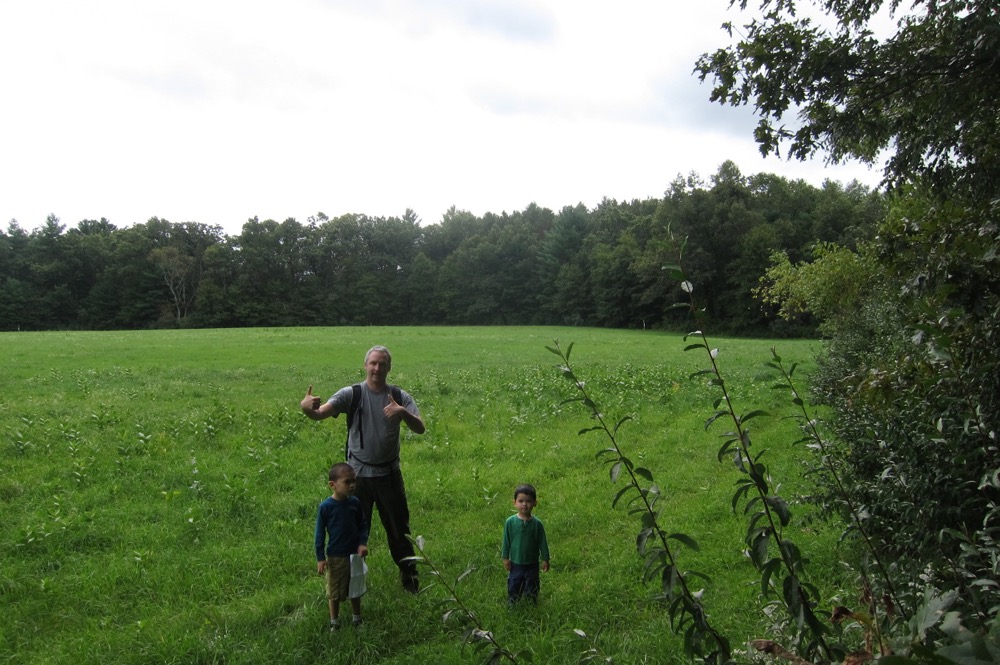 Shortly thereafter, it was a Tussock Hickory Caterpillar and guess what? I was smart enough to keep the boys from picking it up – as they are poisonous and cause quite a rash when handled. Phew. (A thorough tick check afterwards came up empty too… success!) 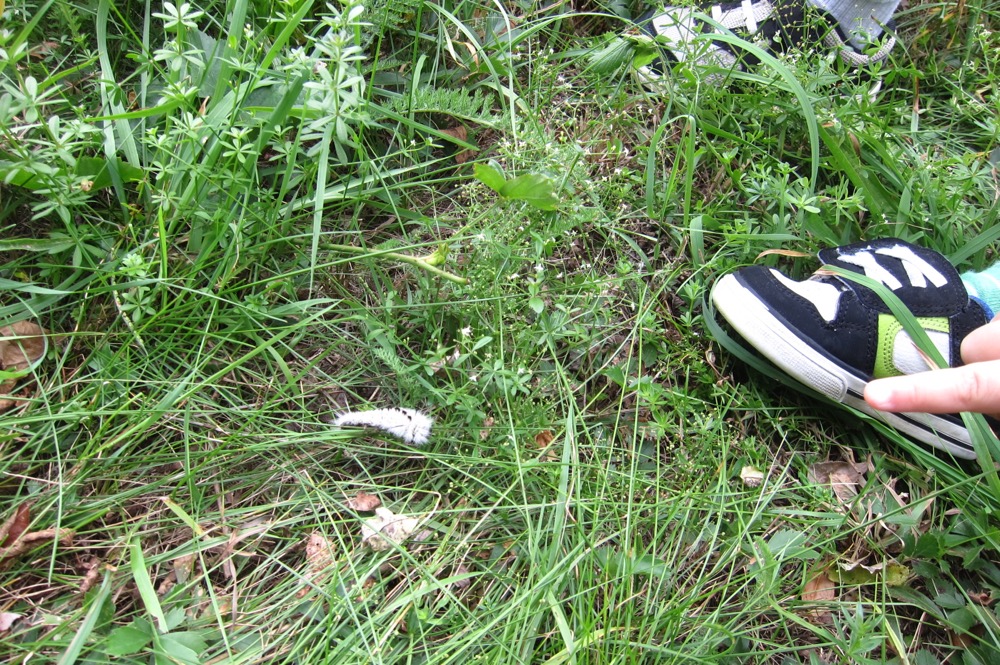 Back into the woods, we did this trail and that, goofing around and having fun. After the poisonous caterpillar lesson, we got to the poisonous mushroom lesson: 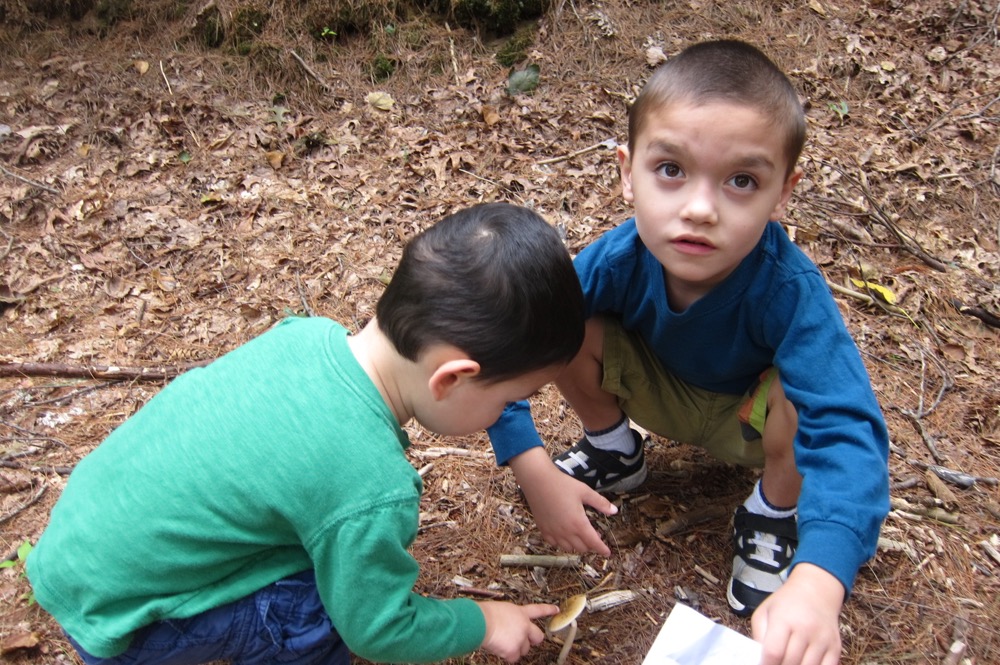 Except that wasn’t poisonous, but even so, I made sure those two clowns never decide to take a bite from a random woodland mushroom. Phew, lots of learnin’ done here at Wagner Woods!

We hiked all of the trails here at Wagner Woods. Since our visit, a trail extension now goes west through Hall Farm to Old Farms Road and Lenora Drive. That purple-blazed trail really goes right through the active farm, which is cool, but can be slightly off-putting to some people since you’re essentially walking through someone’s yard.

BUT! But that extension may someday allow hikers to continue west on the mythical East-West Trail, and that’s only a good thing. 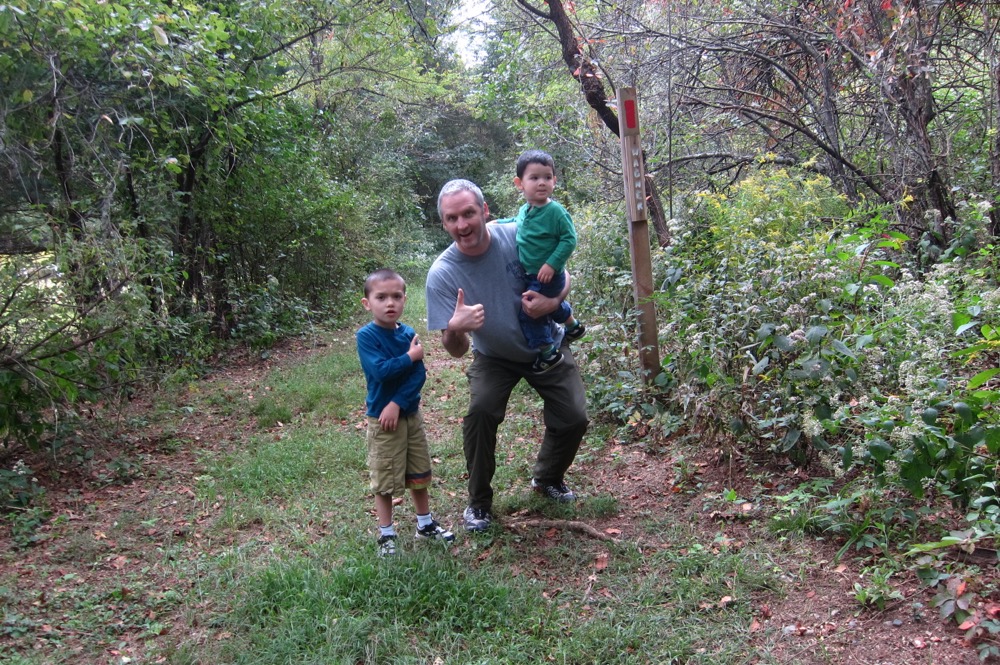 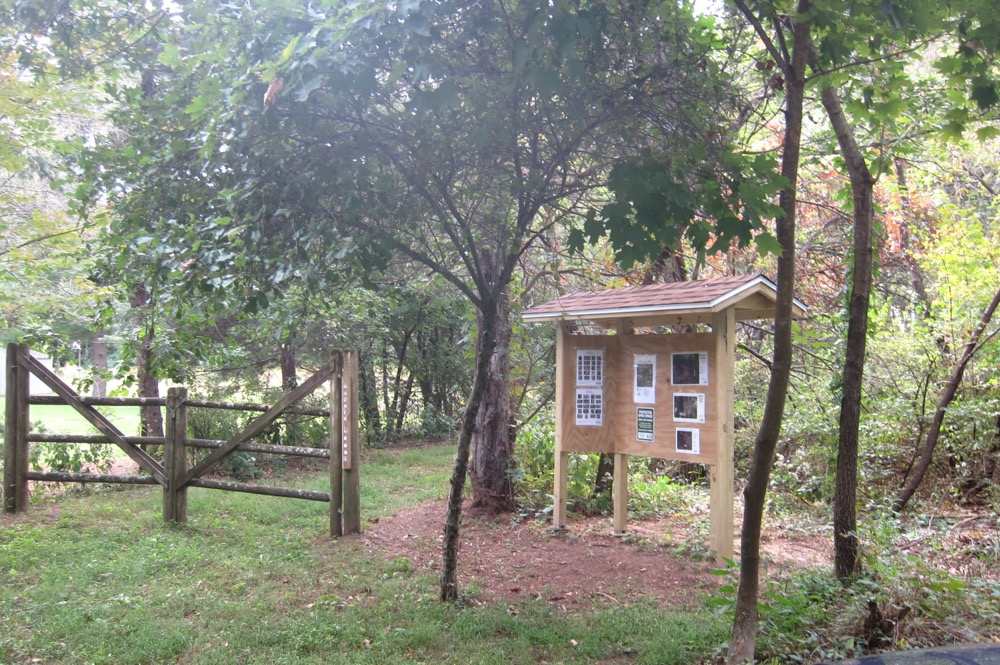