A Solution (Cave) for the Homeless
Squaw Cave, Bolton
April 1, 2010

Note: I enjoyed my title so much that I’ve decided to keep it, even though the entire premise turned out to be totally wrong. Just keep reading and you’ll see at the bottom that I sorted it all out.

Over the years of writing this website, I’ve complained more than once about all the so-called “caves” around Connecticut that are not caves at all, but merely overhanging cliffs on hillsides. There are many of them, and many have rather interesting histories (See List here), but they aren’t caves – and that’s always bothered me. 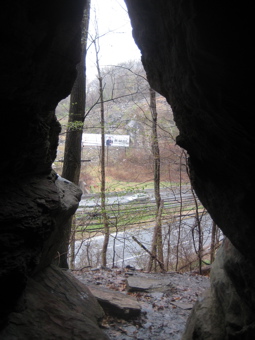 So imagine my excitement at exploring an honest to goodness real cave in Connecticut! While there is some debate over how many true caves are in the state, I’m secure in saying Squaw Cave in Bolton is a real cave. The only other one (and the best in Connecticut) is Tory’s Cave in New Milford.

There are a few small “solution” caves in Western Conn. These caves were formed by water slowly dissolving the marble rock over time. Tory’s Cave in New Milford is the most well known example and has about 50 feet of passage. Another group of solution caves are the Bolton Caves are located in Bolton Notch. They were formed when small pockets of limestone dissolved from the surrounding metamorphic rock. There are four very small caves, ranging from 8-20 feet long and 2 to 6 feet tall. 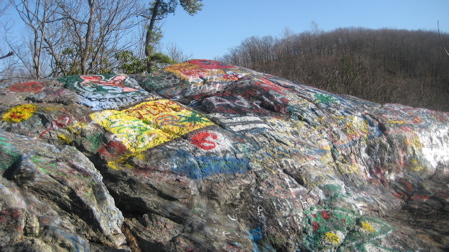 Squaw Cave is in Bolton Notch State Park, one of the first state parks in Connecticut. You would therefore think the park would be easily accessible. Nope. Not at all. The turn off onto the access road is rather hidden. It’s pretty sketchy, I must say – and as of this writing, there is no signage on the highway. Good luck. 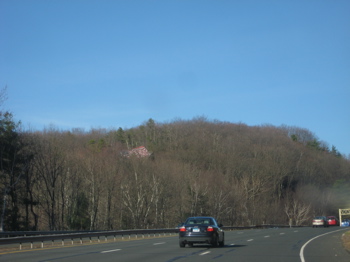 And as with all caves – real and fake – there are the required half-truth histories that go along with them.

I will now turn this report over to a professional, Friend of CTMQ Peter Marteka, whose article (edited for brevity) in the Courant alerted me to this place:

There aren’t too many real caves in the state.

But a place known as “Squaw Cave” exists on the eastern reaches of Bolton Notch State Park where time and the rains of countless centuries have eaten away at the marble and formed the cavern. And, of course, the cave comes with a story passed on through generations about a Dutchman named Peter Hager and his Native American princess Wunneeneetmah or Wunnee.

Most of those who travel along I-384 might know the Notch as”that-hillside-all-covered-with-a-painted-American-flag-and-graffiti-while-driving-along-the-highway.” But there’s so much more to the beautiful Notch with 1,400 acres of undisturbed countryside surrounding the Notch and plenty of commanding views.

For those not interested in the “oohs” and “aahs” that come with a great view and want to go right to the cave, it’s really quite simple. You park at the Notch parking area and travel east along the Hop River Linear Trail. Before reaching a dark tunnel under Route 6/44, take a left along a trail that travels to the top of the tunnel and a grassy area along Route 44. 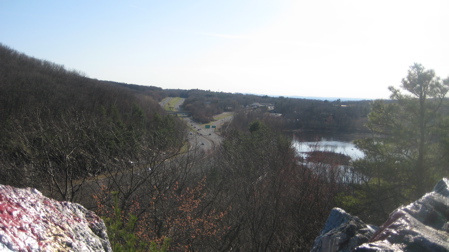 Just before reaching a speed limit sign, a trail travels almost straight up a cliff to the cave. The Notch makes up the divide between the Thames River and Connecticut River watersheds. The marble containing the cave is impressive to look at as well as the surrounding ledges and outcroppings.

“During the Ordovician period, a sea separated the North American continent from a volcanic island arc to the east,” reads the state Department of Environmental Protection’s “Geology of Bolton Notch State Park.” “The rocks at Bolton Notch were predominantly formed from sedimentary and volcanic materials deposited as a result of this sea.” 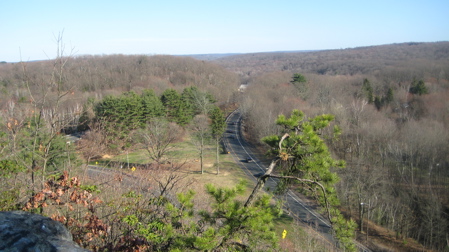 The story of the cave is a bit more romantic than the geology of the area. The story of Wunnee and Peter Hager has a few different versions, but the basic story is that Hager was a cabin boy aboard the ship, Fortune, which sailed up the Connecticut to South Windsor in 1620 to trade furs with the local tribes. Hager loved to explore the wilderness and met Wunnee.

They were married in the Podunk tribe way, but at that time, interracial marriages were forbidden. The pair fled into the wilderness and were pursued by a group of Englishmen. A struggle ensued and one of the Englishmen was killed and a bounty was placed on Hager. They made their home in the cave before Hager was shot by bounty hunters and returned to the cave where Wunnee found him dying.

When the bounty hunters entered, they found no one in the cave. Some say Wunnee dragged the body from the cave through a rear cavern or passage to the other side of the mountain. Others say they just disappeared. Others believe he was buried in the great Podunk Indian burial ground in East Hartford.

Those looking for that view from the top of the Notch should take the main trail directly across the Hop River trail from the parking lot. The trail is a bit strenuous, but the views are worth it. Those in search of that rare Connecticut cave can continue up the Hop River trail and into a storied past. 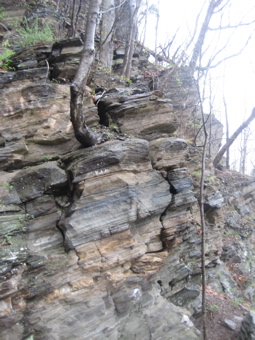 I arrived at the park after work one warm early spring day and thought I’d find plenty of signage pointing the way (I didn’t have Marteka’s simple directions with me, unfortunately). I noted the ding-dong parked next to me with windows down and iPod Touch in plain sight, and proceeded to trudge straight up the mountain. It wasn’t too strenuous at all, and I was up on top in mere minutes. 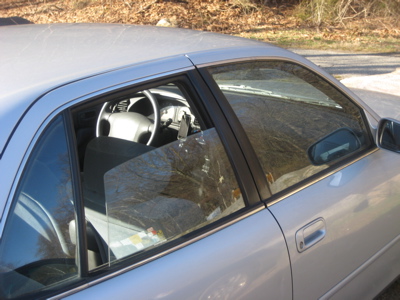 I was standing on the famous flag and I’ve got to tell ya, that thing wasn’t easy to paint. There is a ton of graffiti and junk up there, but the views east are pretty nice. There aren’t too many views in northeastern Connecticut, and this is one of the better ones.

I bushwhacked my way across the top of the cliffs, sort of “feeling” my way to where I thought the cave “should be.” I have no idea why I thought I could do this, but I did.

I had no map and no knowledge of the area, but I found what I thought was Squaw Cave. Unfortunately, a homeless guy or a few homeless people found it before I did.

And they moved right in.

And built a wall at the entrance. I mulled around outside the “Bolton Notch Inn” for a while, wondering if someone would greet me and show me around the place. Oh, but I didn’t bring a cavewarming gift…. How rude of me. 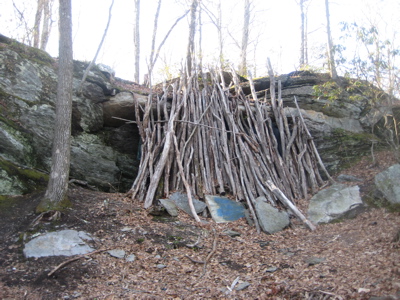 No one came out (to greet me OR to shoo me), but I was pretty certain someone was behind the two thick tarps. I wasn’t really in the mood to confront who-knows-who in there, so I just left and returned to my car. I did pass an impressively built giant roasting spit, perhaps used by the cave dwellers to cook felled deer… Or humans. 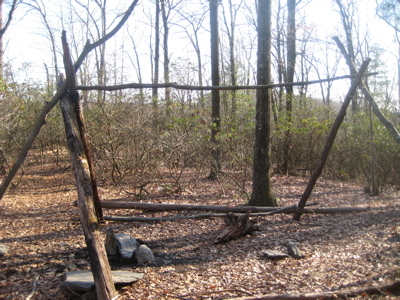 That was a fun read, wasn’t it? L’il bit? But here’s the problem – that “homeless shelter” above? Well, turns out that’s not Squaw Cave. Nor is it even a cave. It’s just a cliff. After I found that place, I decided to read Marteka’s piece about the right cave and get to the right place.

So a week later (in heavy rain), I returned and – yup, I was wrong. Very wrong. Oddly enough, you can see Squaw Cave from Route 44 right past the end (or beginning) of 384 up on the steep hillside. Just look for the graffiti. 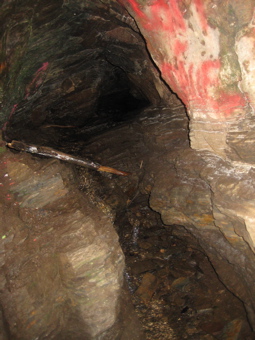 Following the directions above, you can get there in about 10 minutes at most – and it’s really cool. A real solution cave! The stratification and holes bored through by water are very evident and the view out the entrance of the Notch and Route 44 is rather unique.

I’m glad I made the effort to set myself straight. With only two real caves in the state, it’s nice to get to at least one correctly. My friend Matt at Explore Connecticut has a great video of himself going 30 feet into Squaw Cave (as well as the rest of the park). Very worth your twelve minutes: