“Hey Steve, you should probably write up your brewery visits within a few weeks or months of visiting. That way, your memory will be much fresher and you won’t have to rely on some not-so-clever construct when finally getting around to writing about a place.” 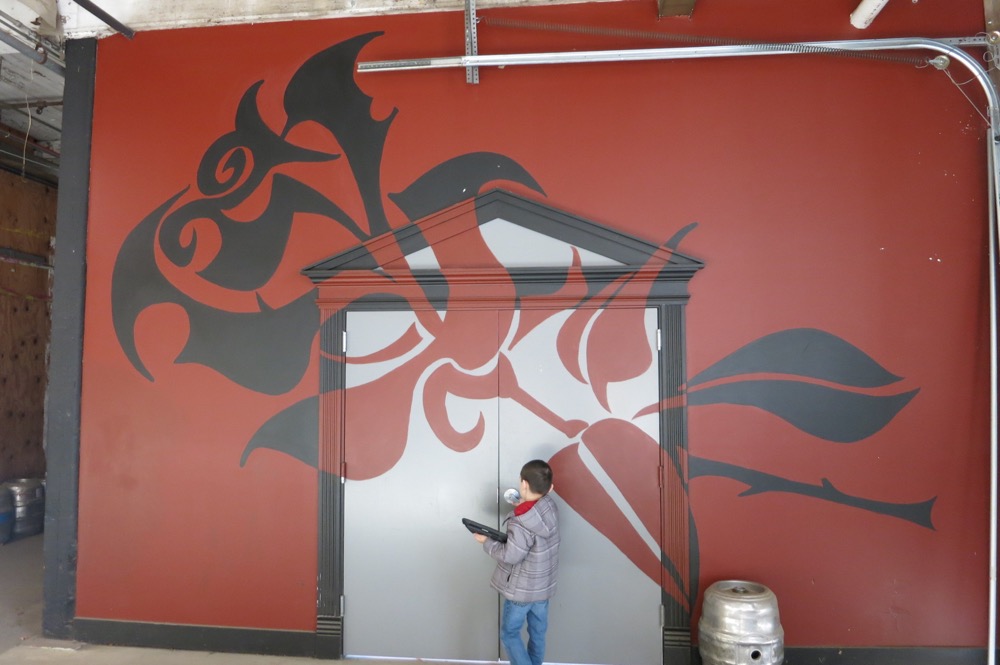 That is certainly some sound advice, but for some reason I rarely heed it. Sometimes I have a reason; like if a brewery is brand new and I know they will be expanding or adding several new styles to their portfolio. But mostly, I just sit on things for too long.

After we had capsized
I could tell you how you thought
Well, I’m not sure
But laid to rest on the city on the wall

I’m trying to do better. In the case of Middletown’s Stubborn Beauty, because I hadn’t ever written up my first or second visits during their first and second years of operation, I did the right thing and returned more recently. 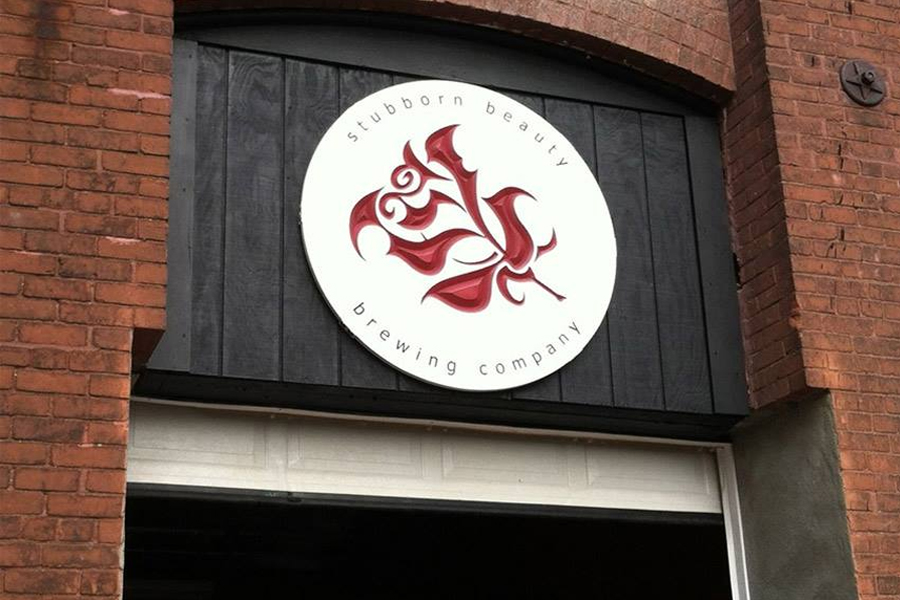 Stubborn Beauty was the first brewery in the old Remington Rand building. It is a cavernous, dark, dank, cold building and when the place became operational, they occupied a tiny little space right in the middle of it. I’m sure they have plenty of stories of hearing things that went bump in the night there.

Since then, Forest City Brewing opened a hundred yards down the (dark, dank, cold) hallway. Then Spoke & Spy Ciderworks came online. In 2022, a BBQ restaurant is moving in. All this in an old factory at the end of a long dead-end literally on the other side of the tracks.

Yeah. That’s me. Back in the heady Connecticut brewery days of 2014-15, that was me. I knew about every goings on and backroom rumor at every brewery. And I’m sure I bored the ever living monkey $%&# out of a lot of people. I’m sure I knew something about Stubborn’s owners and brewers Shane Lentini and Andrew Daigle back in the day as well. 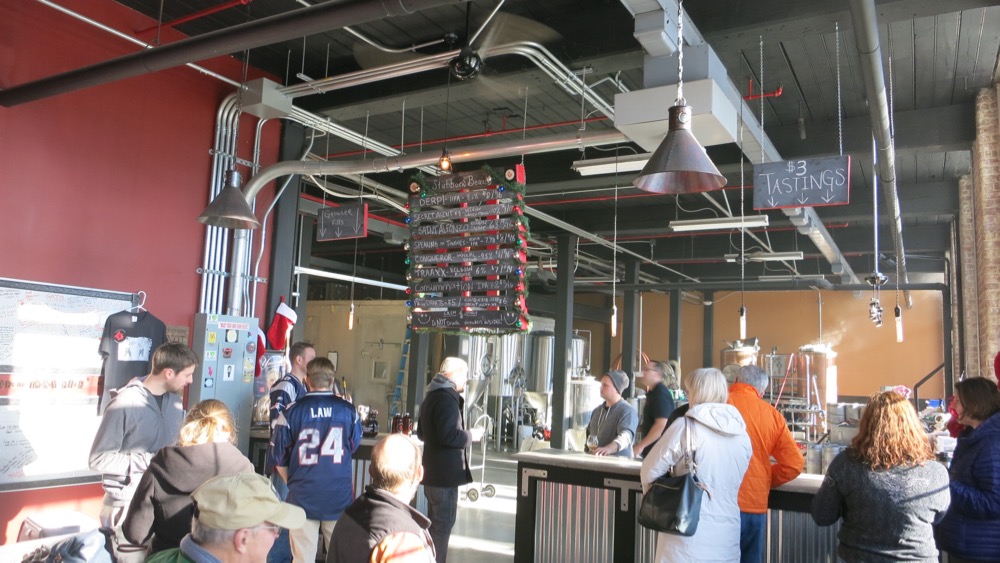 I just can’t remember anymore. I know that they followed the familiar path of many pre-explosion breweries; otherwise employed homebrewers who impressed friends and family and decided to make the leap. But these two were a bit more pragmatic than most and instead of jumping in right away, they saved money and planned for years.

Our instincts, they were cringing
About how we lived our lives
It didn’t seem we’d lived enough
To even get to die

And I know that both Lentini and Daigle have a penchant for quoting dark writers and musicians about death. It’s right there on their website – and has been for nearly a decade. Lentini quotes Chuck Palahniuk: “We all die. The goal isn’t to live forever, the goal is to create something that will,” and Daigle, Isaac Brock: “Someday you will die somehow and something’s gonna steal your carbon.”

Heavy stuff. And yes, it’s okay not to know who Isaac Brock is. I do, but I’d rather remain Modest. 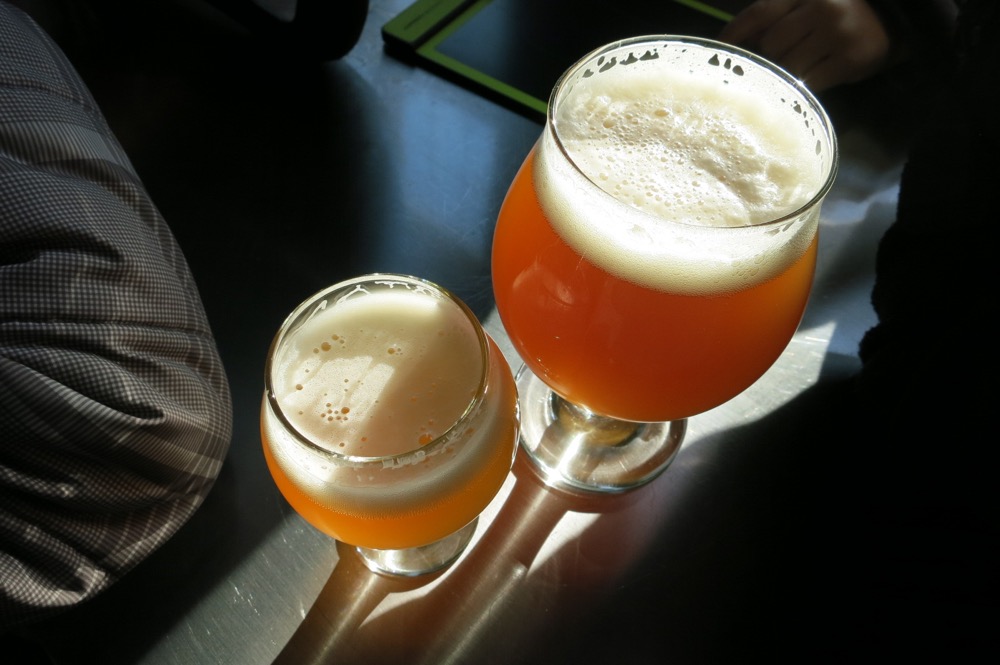 Anyway, the boys’ instincts were correct and saving money and opening the way they wanted to open was the smart move. Early on at Stubborn Beauty, the parking lot was a bomb crater and the beer selection was minimal. But they were good. And there was a Belgian ale, normal IPAs, normal stouts, and the like. They brewed Nummy Nummy DIPA and it became a bit of a thing in Connecticut for a while.

All these diss distractions
So beautifully complex
Well, I loved life’s surprises so much
I don’t want to know what’s happened

Complex surprises in a well-done beer are very good things. Stubborn had an obsession with rye for several years, and probably still do even if the market has moved toward overly sweetened messes and far, far away from spicy and more bitter beers. 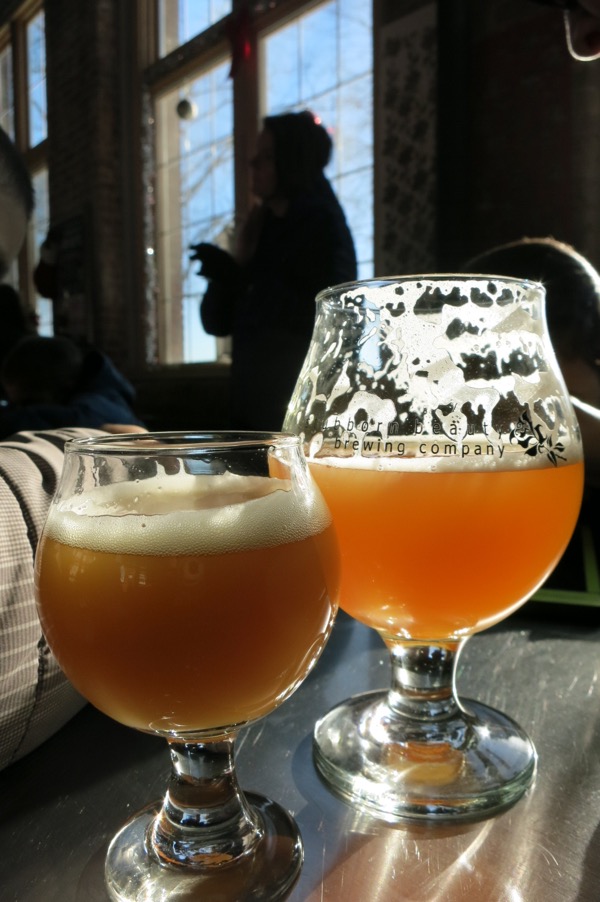 Even the saisons coming out of Stubborn were full-bodied with a hint of bitterness behind that familiar saison yeast. They’ve had several “special” release beers over their tenure as well; from old ales to deep and complex barrel-aged stouts.

Stubborn shouting, said
“I don’t do what you do”
I don’t know
Could it really hear highly if you highly care?
And you don’t
Stubborn beauty, stubborn beauty
I’ve been away

I have “been away.” Approaching 50 years old, I’ve greatly limited my beer intake. (Okay, I’ve pretty much stopped entirely, but that kind of ruins my writing about breweries, now doesn’t it?) I’ve been away from the local brewery scene for quite a while at least insofar as actually talking to the brewers and others in the industry about the industry. The industry is all grows up now.

So many smaller breweries have turned to cheap, dirty, and downright gross beers to satisfy a demographic to which I clearly do not belong. Fortunately, Stubborn Beauty has this to say:

Quality and freshness will always take priority over volume. Through creativity, innovation and experimentation stubborn beauty produces a diverse line of beers. While respecting brewing tradition we also employ a healthy dose of both revolution and evolution. 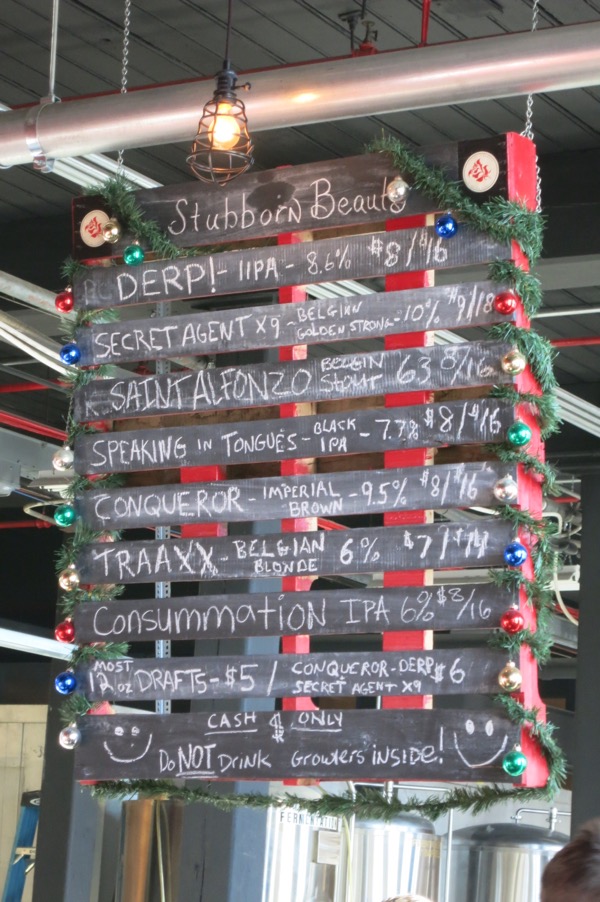 While that sounds like they’re teetering on the edge of stupid beers, I’m pleased to tell you that they are not. A quick look at their line-up in February 2022 shows that they have a red ale(!), a bunch of IPAs, a dubbel (!), a rye saison (!)… and one “fruited sour” thing which I’m going to guess is actually pretty good.

Hardly education
It was somewhere in between
Oh, I hit the roof but I had
Aimed for the ceiling

I’m certainly no Nostradamus, but I think I would have predicted Stubborn Beauty’s successful future back in the day. They were never going to be a darling or trendy brewery, but they clearly knew what they were doing and they weren’t going to fail out of the blocks either. There would be some missteps, especially with early canning efforts of their Nummy Nummy and Happy Treez; but at least they were highly sought after when they were first made available. 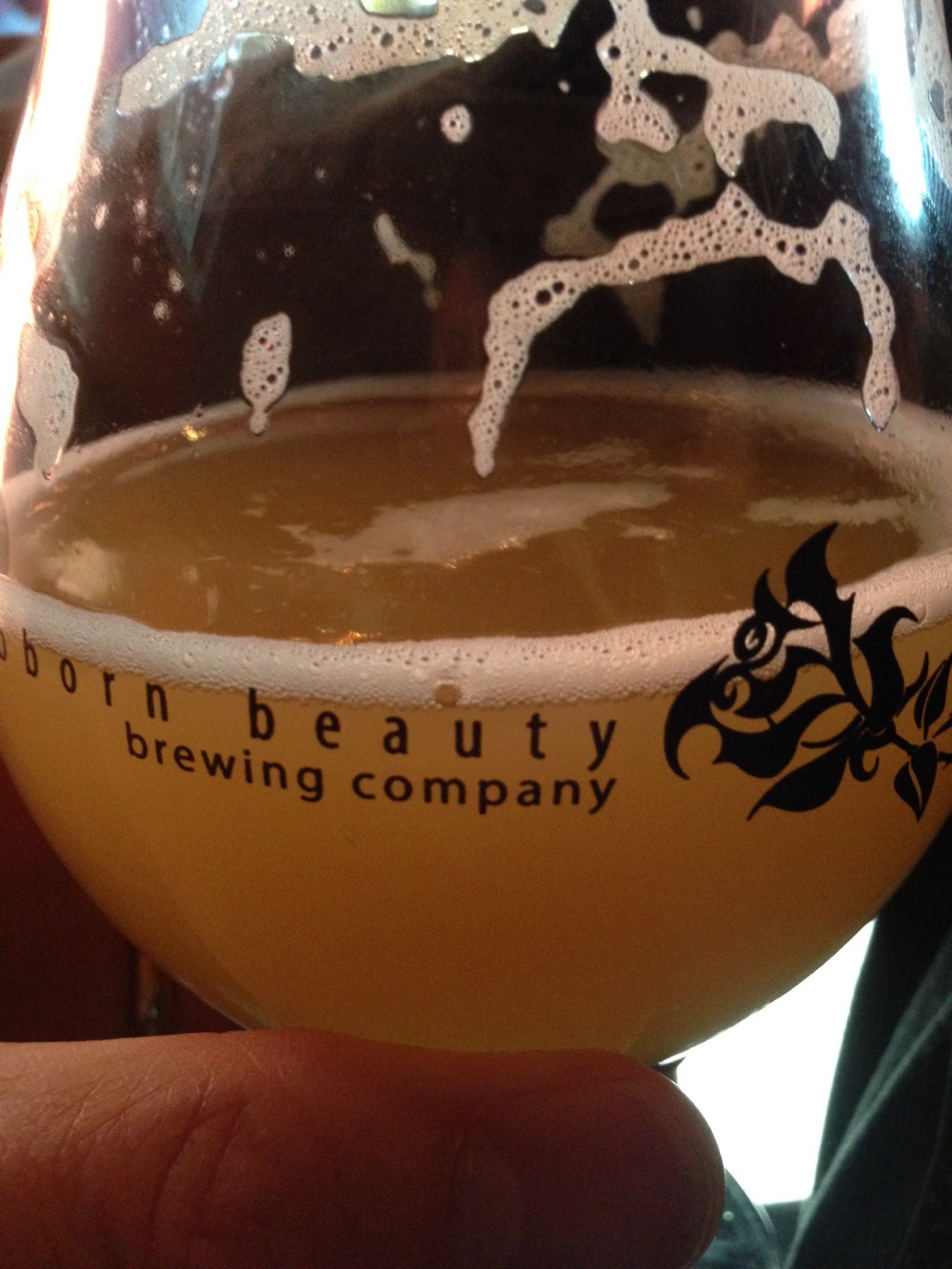 But with a pandemic and over 100 breweries in 2022, I would have correctly predicted some of the breweries that have since shuttered. And Stubborn Beauty hasn’t. I like that they’re “in it” with Forest City and Spoke & Spy in a way. It’s a bit dangerous to be a brewery tourist and hit up three joints in immediate succession, and while this is unique in Connecticut, it’s not unheard of elsewhere.

— Written by that Isaac Brock guy

Stubborn Beauty, for me, is the top reason to visit the Remington Rand Building. I’m not saying the other options are bad, per se, I’m just saying that Stubborn Beauty brews the beers I’d want more than the others down the hall. (And hey, if the cidery down the hall is more your thing, they’re available here as well.)

The brewery has matured and grown over its lifespan, and perhaps Lentini and Daigle have chilled out with the nihilistic fiction and have found love and happiness. Surrounded by good beer every day, one would hope so. 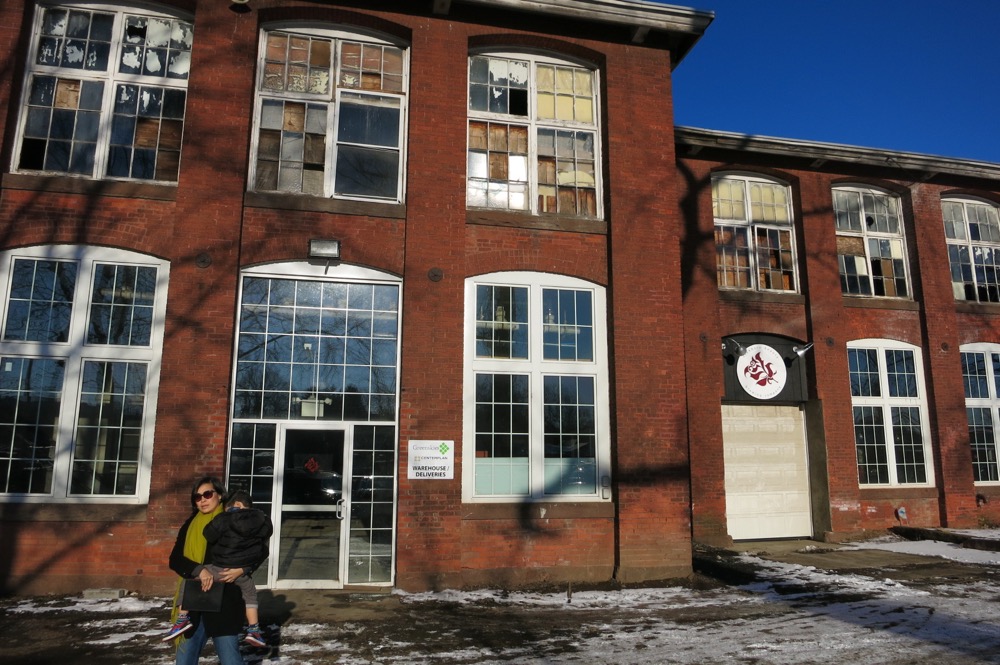