After last week’s more-difficult-than-usual hike over in Barkhamsted, I sought out an easier one for us this time around. To keep the boys engaged, I wanted a relatively short and flat Sky’s the Limit Hike. 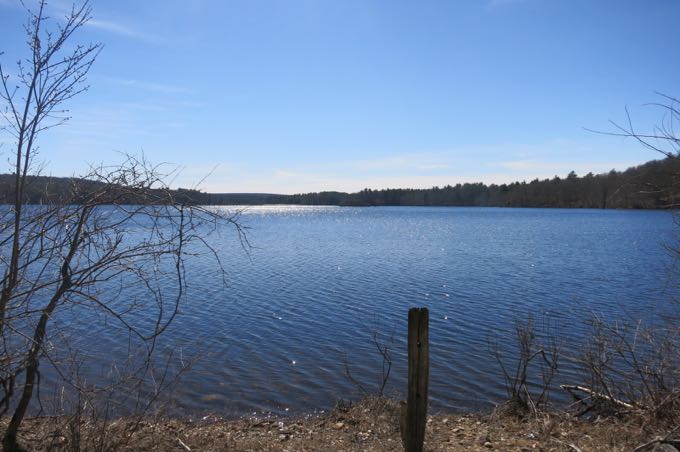 And cheating would be okay.

Mansfield Hollow, I thought, would provide all of the above.

If you are completing the challenge, and you didn’t promise your little kids an “easy” hike, this one allows you several nice route choices around the lake from the main parking lot on Bassett Bridge Road. (The Blue Trail through this area is the Nipmuck Trail, which extends from just south of the Mansfield Hollow Dam north up to the Massachusetts border in Union at Bigelow Hollow State Park.)

But yes, we “cheated.” And I don’t feel bad about it at all.

First, we took the required picture at the main lot: 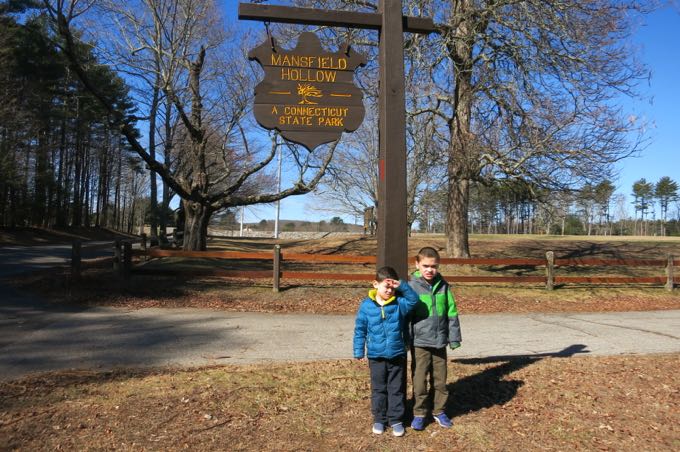 Then I drove up route 89 to find the hiker’s lot and the yellow trail. After I drove past it, I was curious about other cheat options. Atwoodville Road off of 89 offers an access point to the Challenge goal only about a third of a mile away.

Don’t try this cheat: The road is covered with No Parking signs. It’s not worth upsetting the people who live there just to save some time trying to get your TSTL medallions.

But then… then I noticed something on Google’s satellite imagery. It turns out that you can cheat the heck out of this one. 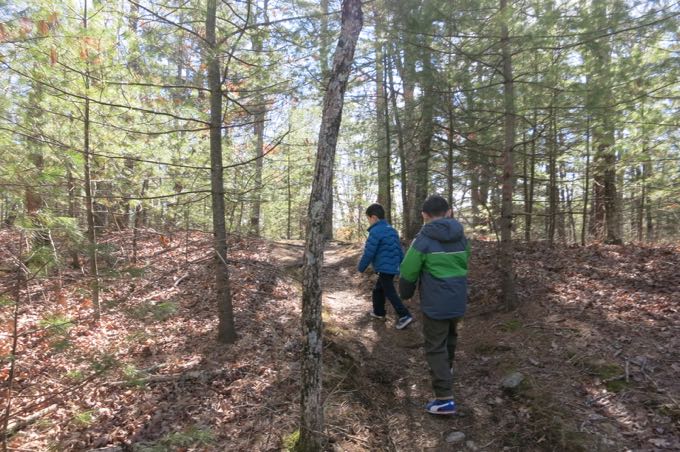 Here, Atwoodville Lane is a dead-end off of Atwoodville Road. Look closely and you’ll see a north-south road – and a white truck parked on it. That spot is easily, and I assume legally, accessed down the dead-end road. The unnamed road is an old road that goes from route 89 down to the lake and I’m not sure how far down it you can drive.

Have I wasted enough of your time on this? Hey, I’m just curious about out-of-the-way stuff in Connecticut and abandoned, yet drivable, roads have unlocked lots of cool stuff for me.

As it was, we parked on 89 in a decently sized hiker’s lot. This gave us a hike of maybe 1.25 miles or so – and almost entirely flat. And since I blabbed on about backwoods roads no one cares about, I’ll now just turn this page into a photo-essay. Enjoy! 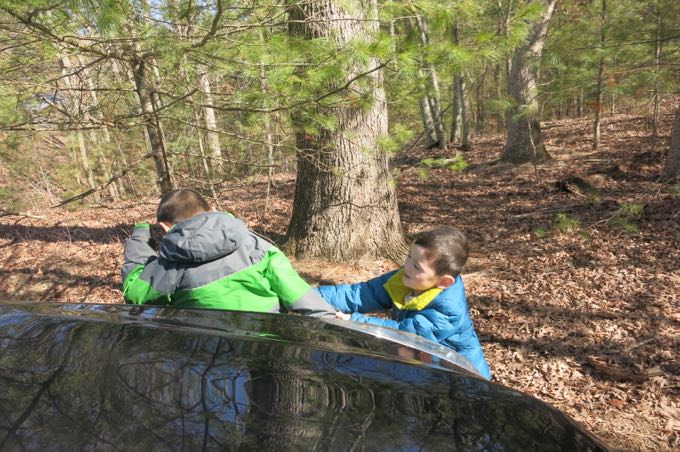 Sweet! A fight to start things off right. 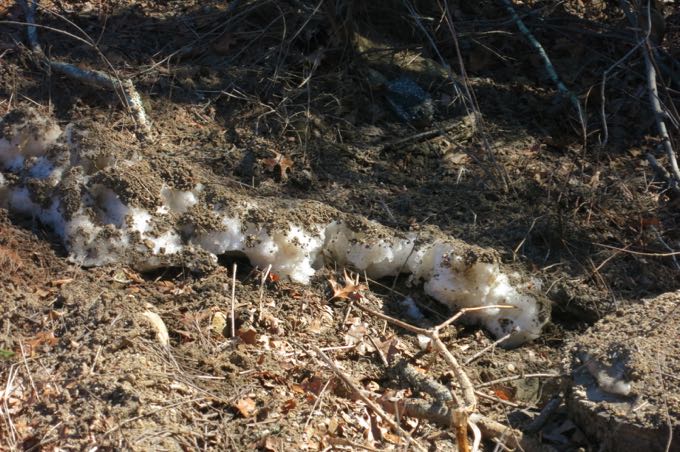 Amazing that there is still some snow here. 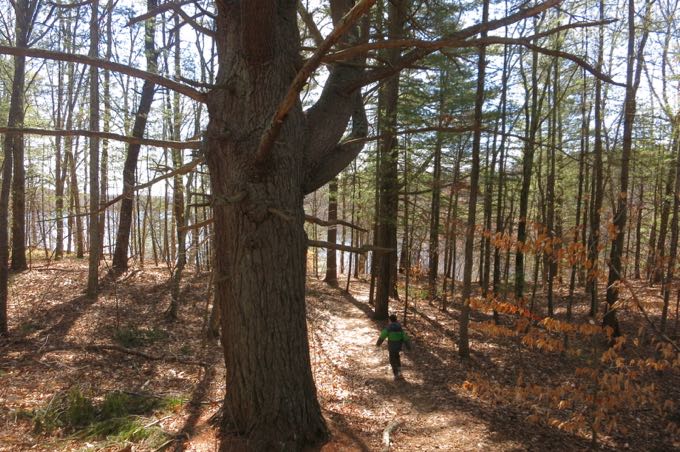 Massive red pine near route 89 (You can see Damian to the right of the tree for scale.) 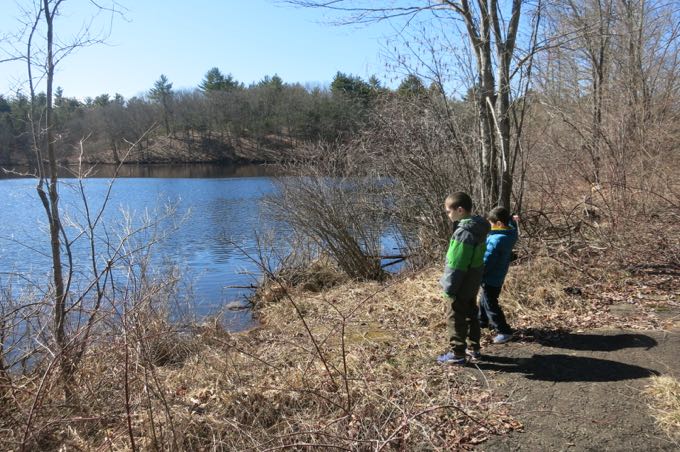 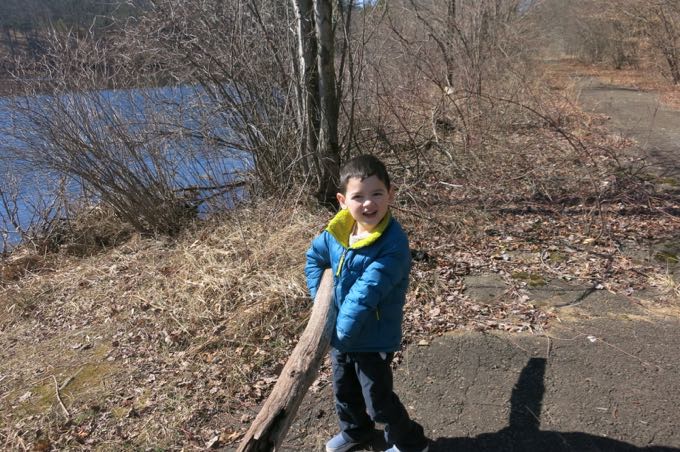 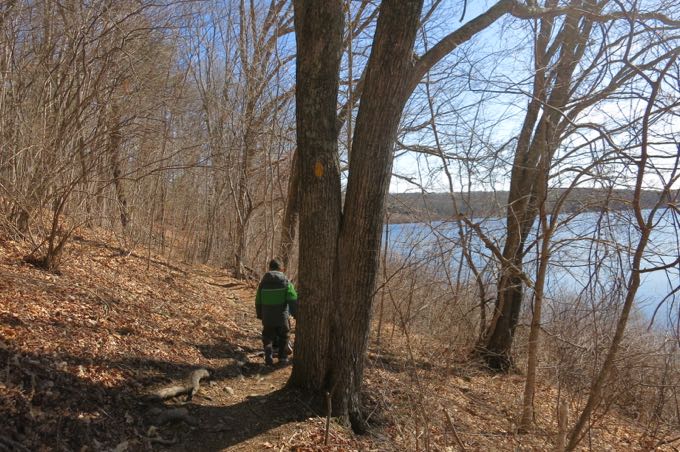 Much of the hike was lakeside 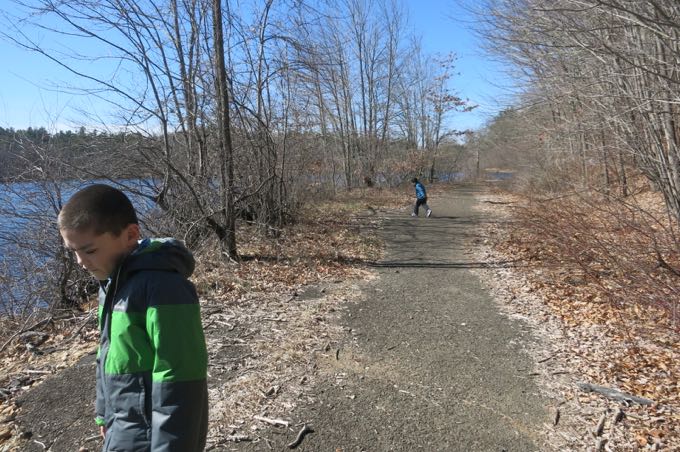 And much of the lakeside hike is along this old road 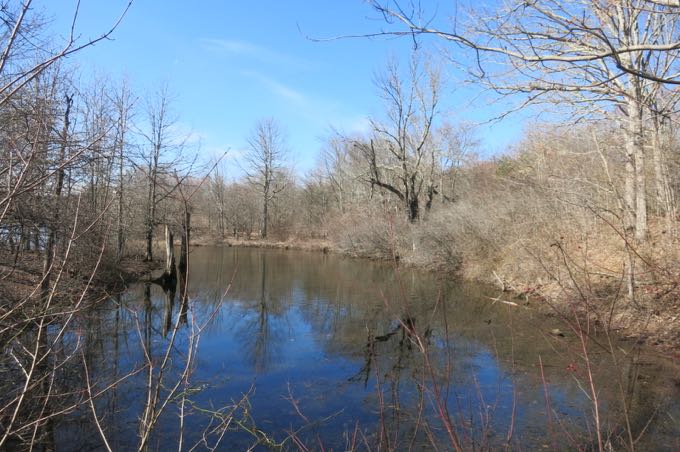 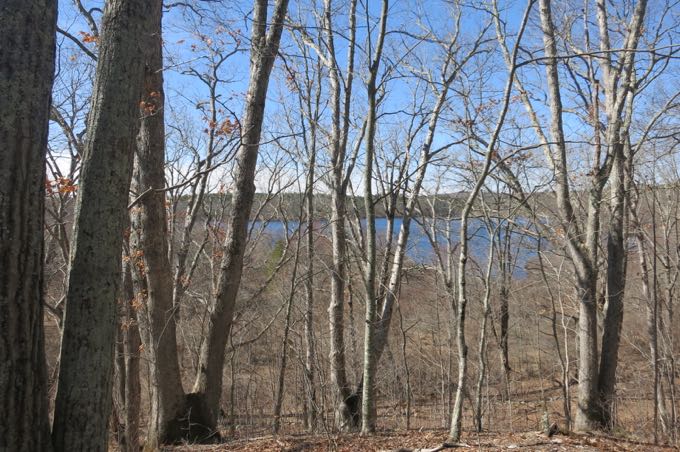 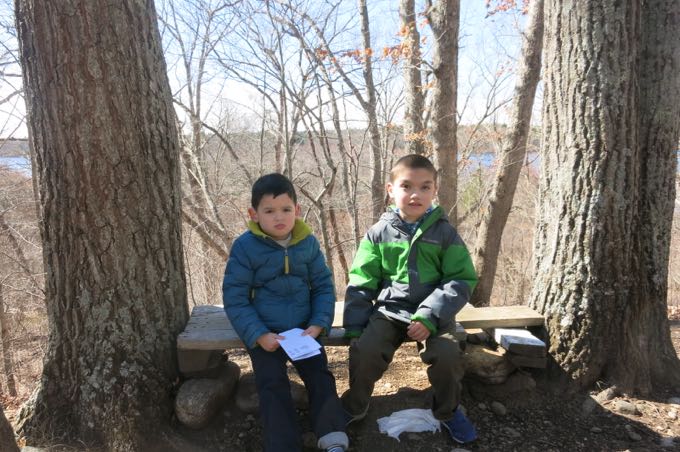 The official challenge point picture. Calvin was (once again) irrationally upset about something – this time it was my inability to change the snack item into something more desirable to him at the moment. 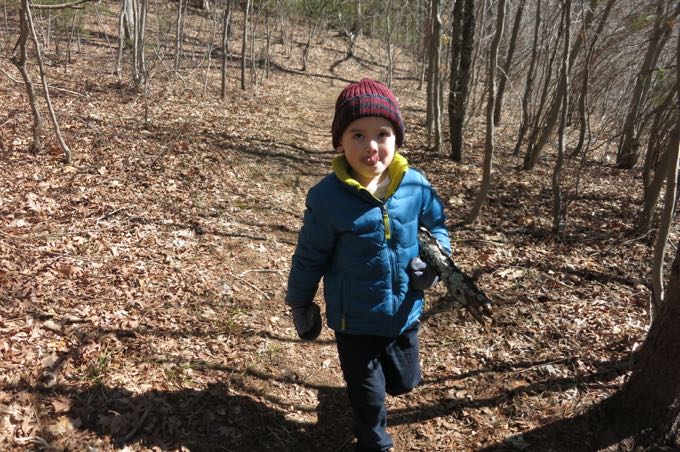 His spirit picked up with a rock in one hand and a log in the other, with a nice throwing session ahead of him. 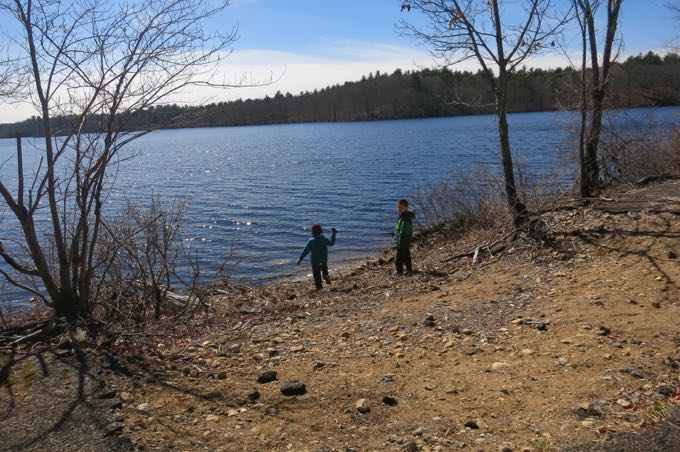 Ah, bliss… Wait for the splash… 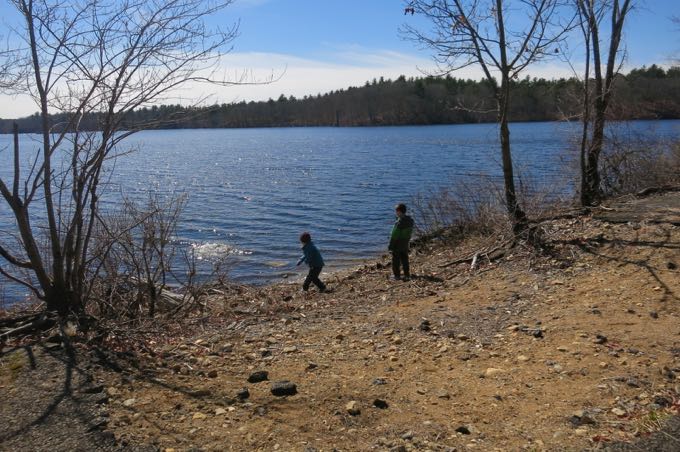 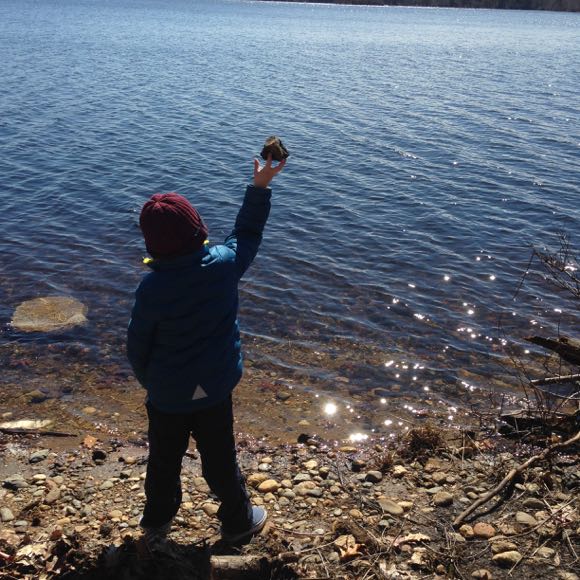 His form is getting a better each week. 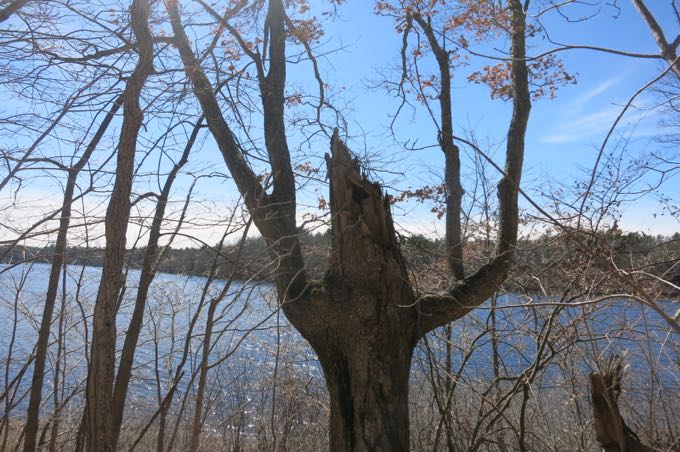 They both thought this tree looked “like a monster” 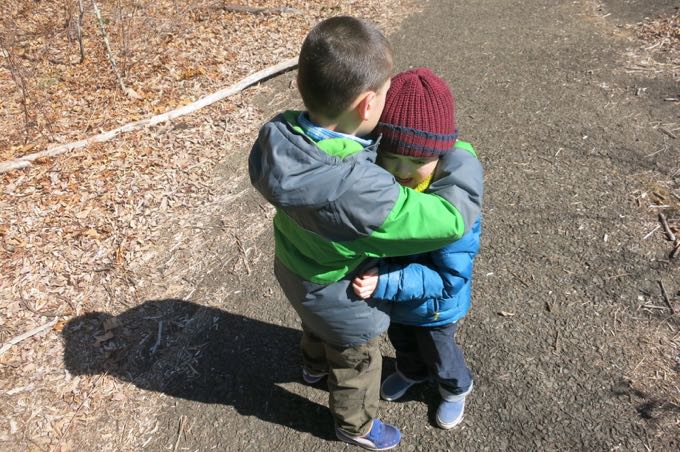 Then Calvin tripped and fell and cried and Damian hugged him. 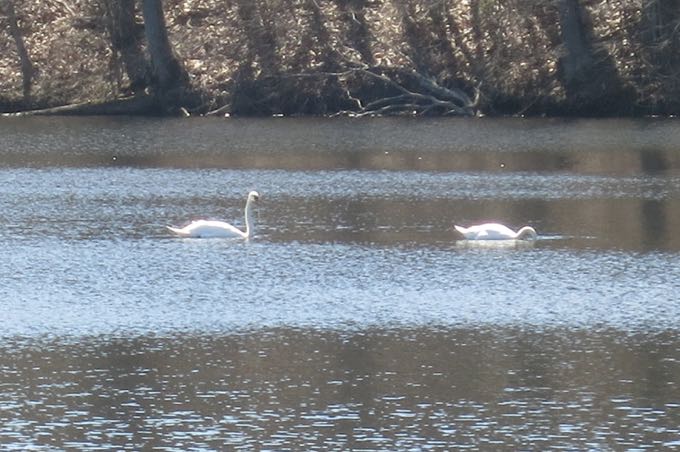 And there were swans here too

We passed some particularly colorful and vulgar graffiti. We got to see a little woodpecker in action right above us at one point. Then it was back up the hill to the car. We drove through UConn’s campus and I again marveled at how much it has changed in the twenty years since I was there.

That’s all I’ve got.