I had no idea this place was part of the Freedom Trail when I visited it originally: 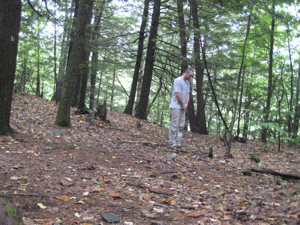 At this site was a village made up of Native Americans, African Americans, and whites who in their time were considered outcasts. The village was established ca. 1740 by Molly Barber, a white woman from Wethersfield, Connecticut, and her husband, James Chaugham, a Narragansett Indian from Block Island in Long Island Sound. They moved to the northwestern Connecticut wilderness to escape the wrath of Molly Barber’s father. The community was abandoned around 1860 after nearly 120 years of occupation. Today, as an archaeological site inside People’s State Forest, it commemorates people who lived on the margins of society. They were ordinary individuals who created an extraordinary multicultural community. The site is listed on the National Register of Historic Places.

Much more about the “lighthouse,” and the CTMQ Visit here