If you ever find yourself on the winding backroads west of Crystal Pond Park, you may drive through the expansive Buell Orchards on a September afternoon. If you do, you will be a little freaked out because you’re in Eastford, but there will be tens of orchard tourists in the road. Be careful. 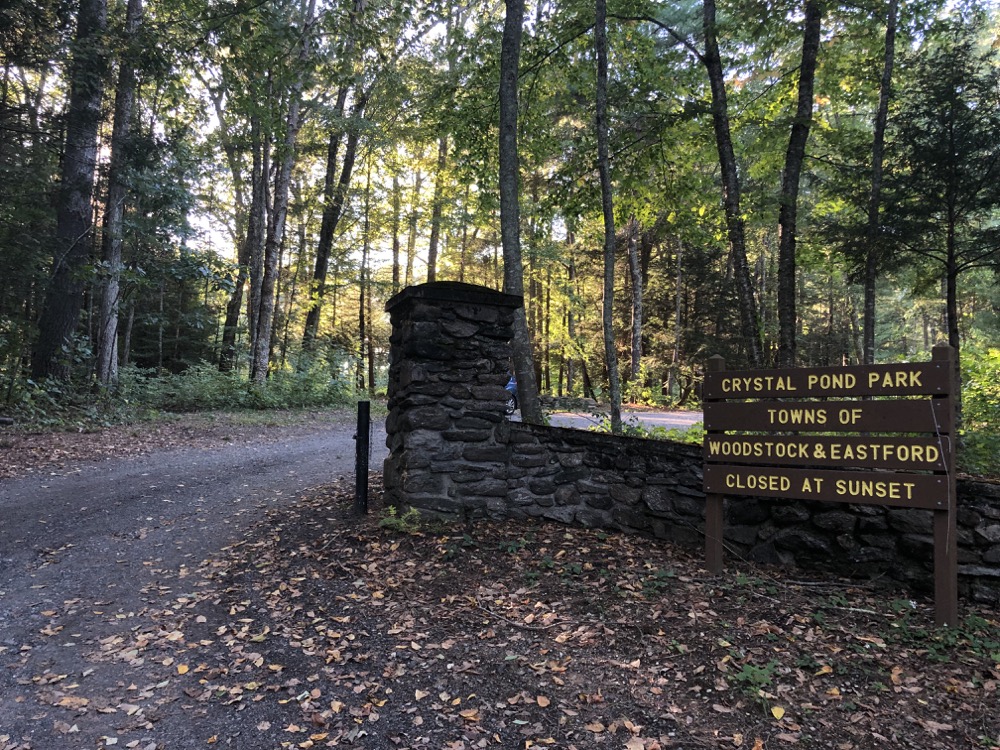 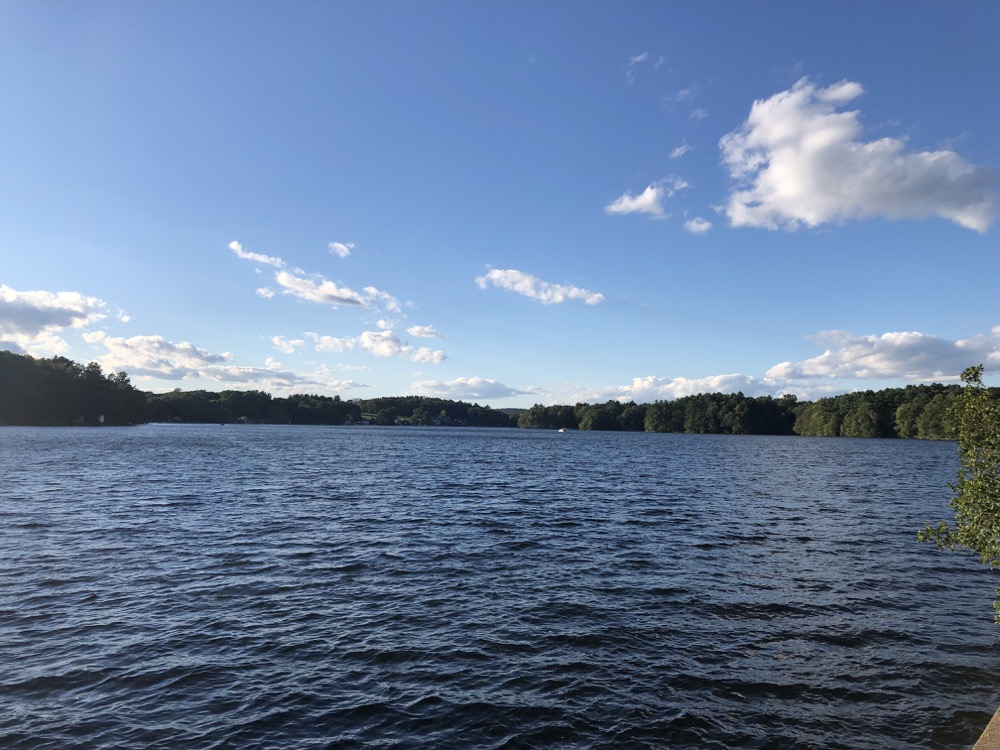 Once on the eastern side of the Crystal Pond, heading towards the park entrance, you’ll settle back down as the road deteriorates from two-lane asphalt to one-lane dirt. Ah. That’s more like the Eastford I know. (Actually, the park entrance and area around the lake itself is in Woodstock. Same diff.)

I’ve written before that parks and trails spanning two towns is rarer in Connecticut than one would think. The 134-acre Crystal Pond Park is a truly shared space. If you think that “just happens,” you clearly don’t know how Connecticut’s 169 towns work. 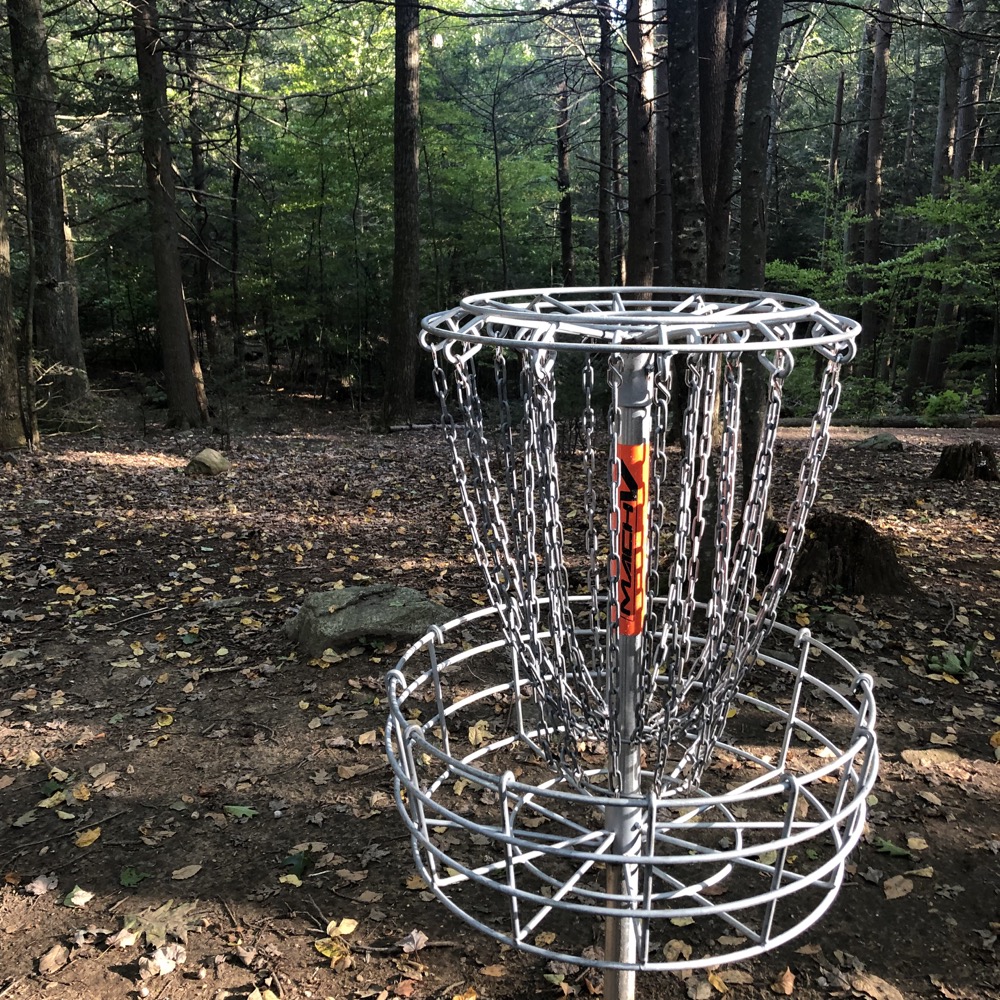 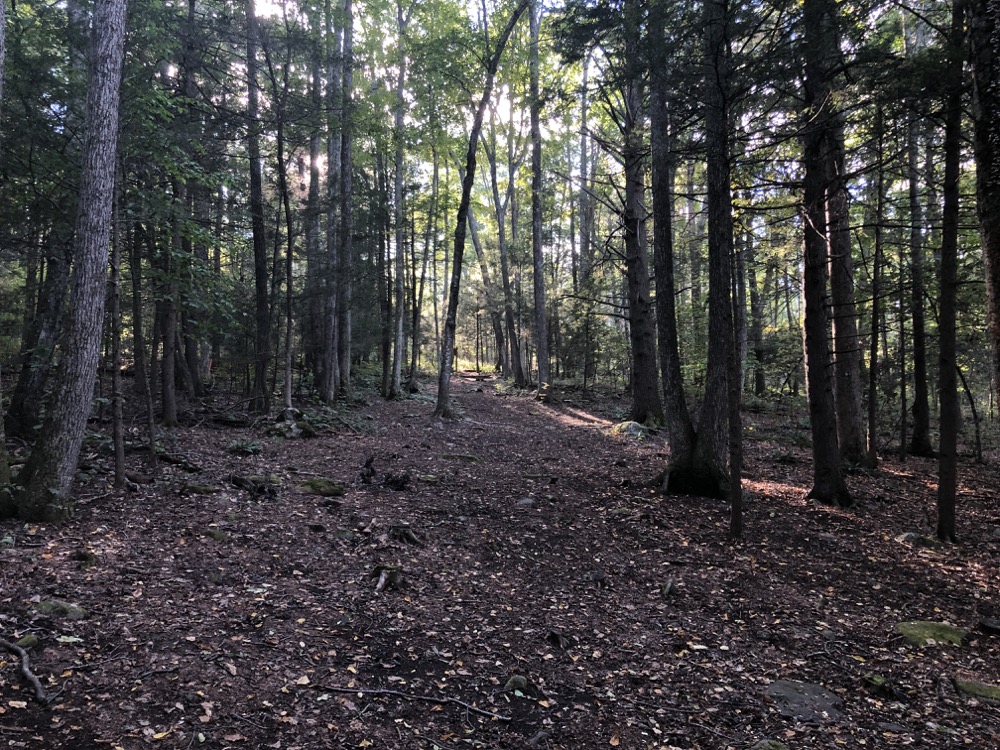 Crystal Pond Park can trace its roots back to 1916 and Camp Keemosabee. Is that how Keemosabee is spelled? I never knew that. Anyway, this was a camp started by the New Britain Area Council of the Boy Scouts. Half a century later, in 1968, the New Britain and Bristol Area Councils merged to form the Nathan Hale Council and they renamed the joint “Camp NAHACO” – the name being derived from NAthan HAle COuncil. The Boy Scouts used the camp regularly until 1977, at which point it began to become neglected.

By the new millennium, the place was garbage. Voters in Woodstock and Eastford purchased the property from the Boy Scouts in 2003. Over the next fourteen years, through a series of referenda and votes and town meetings and commissions and boards, the park was renamed Crystal Pond Park and the two towns sorted out how it would by maintained and managed. Phew.

All I wanted to do was walk its trails; I didn’t care where.

So walk its trails I did. 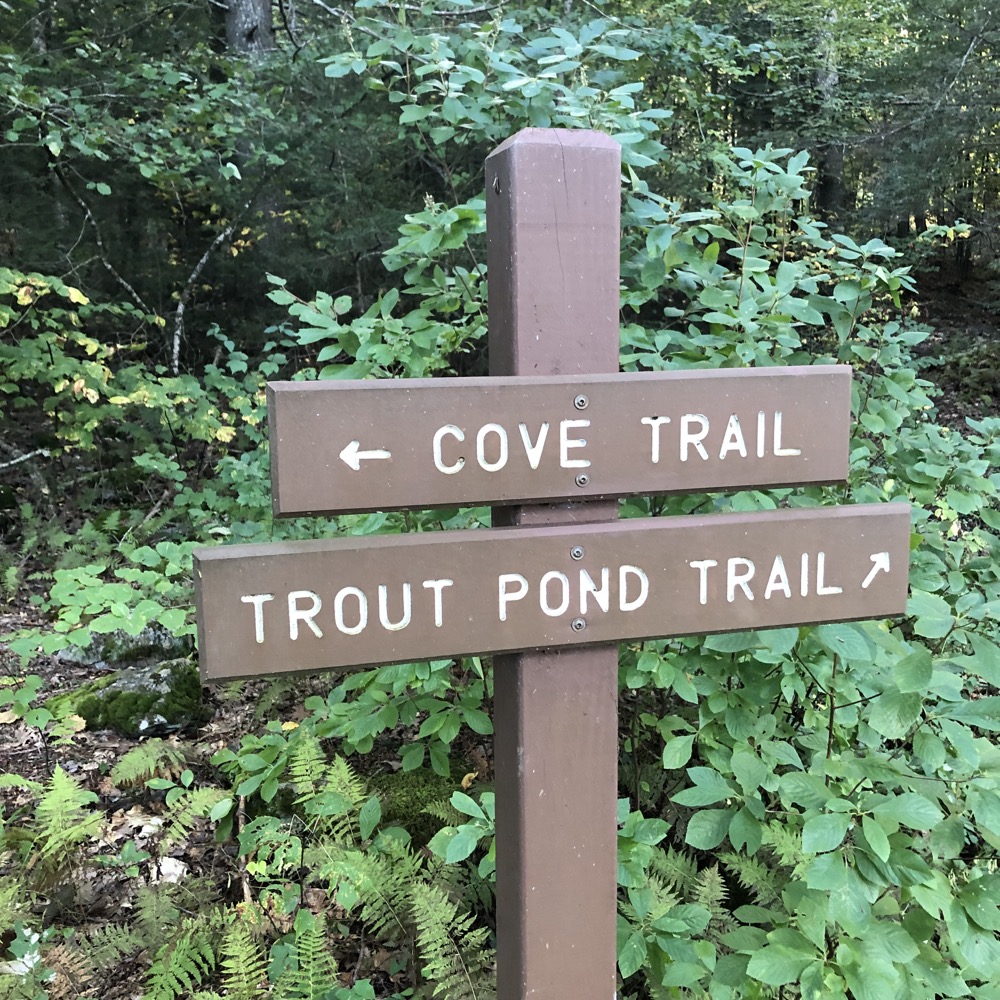 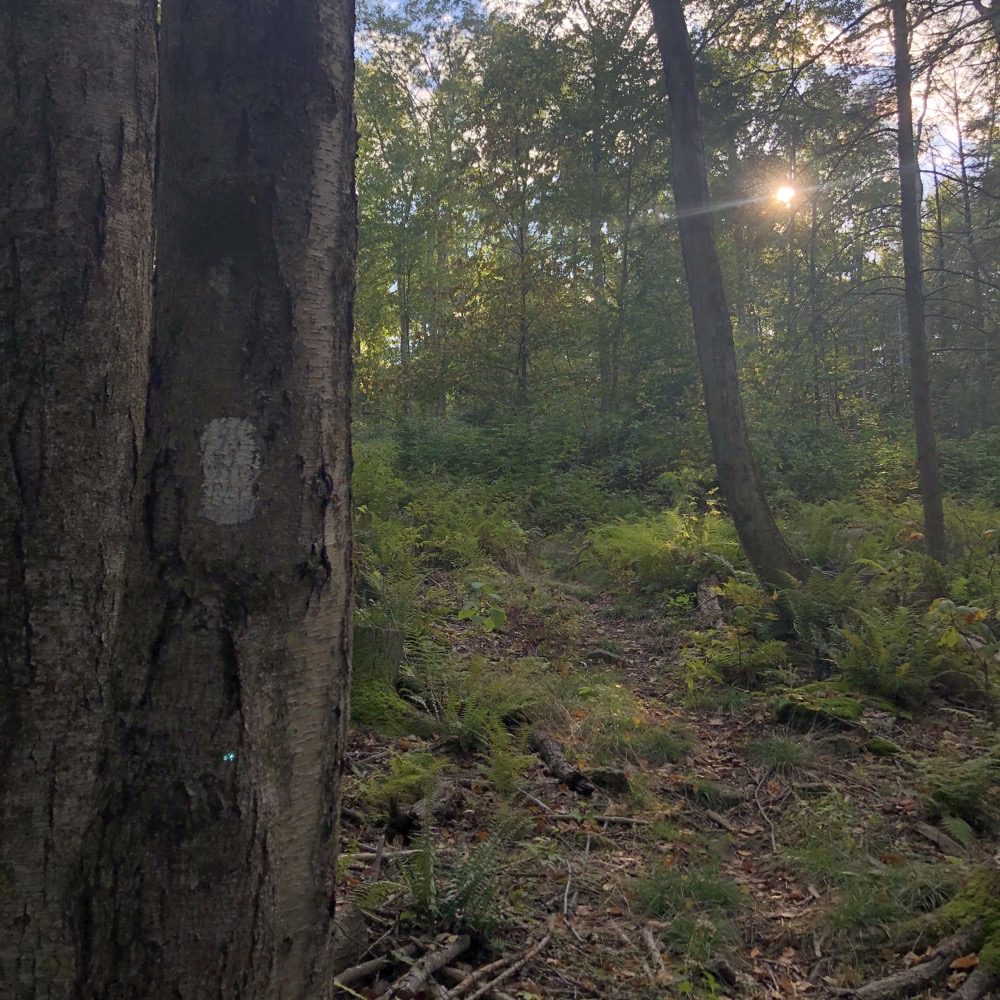 I parked in the lot out near the road and just sort of picked my way through the wooded disc golf course. Signs told me this was the former Connecticut Path. Signs here also told me all about the Old Connecticut Path, but they didn’t tell me to drive south a few miles to hike along a preserved stretch of the original path. I did that anyway along the Boston Turnpike Trail in Eastford.

The Old Connecticut Path was the Native American trail that led westward from the area of Massachusetts Bay to the Connecticut River Valley, the first of the North American trails that led west from the settlements close to the Atlantic seacoast, towards the interior. The earliest colonists of Massachusetts Bay Colony used it, and rendered it wider by driving cattle along it. 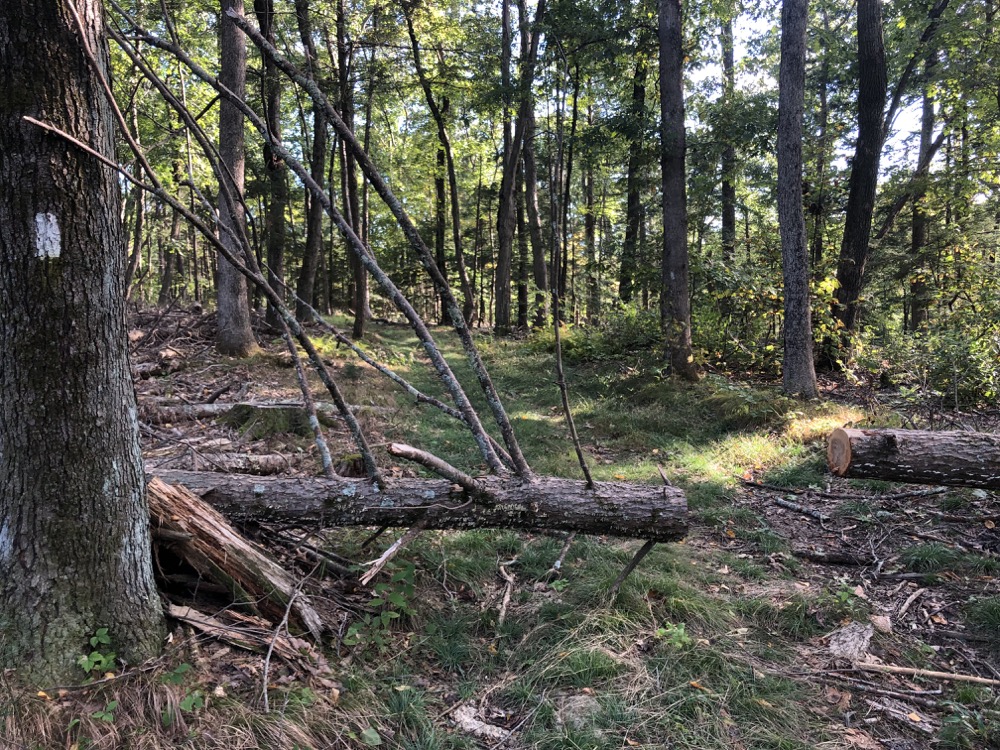 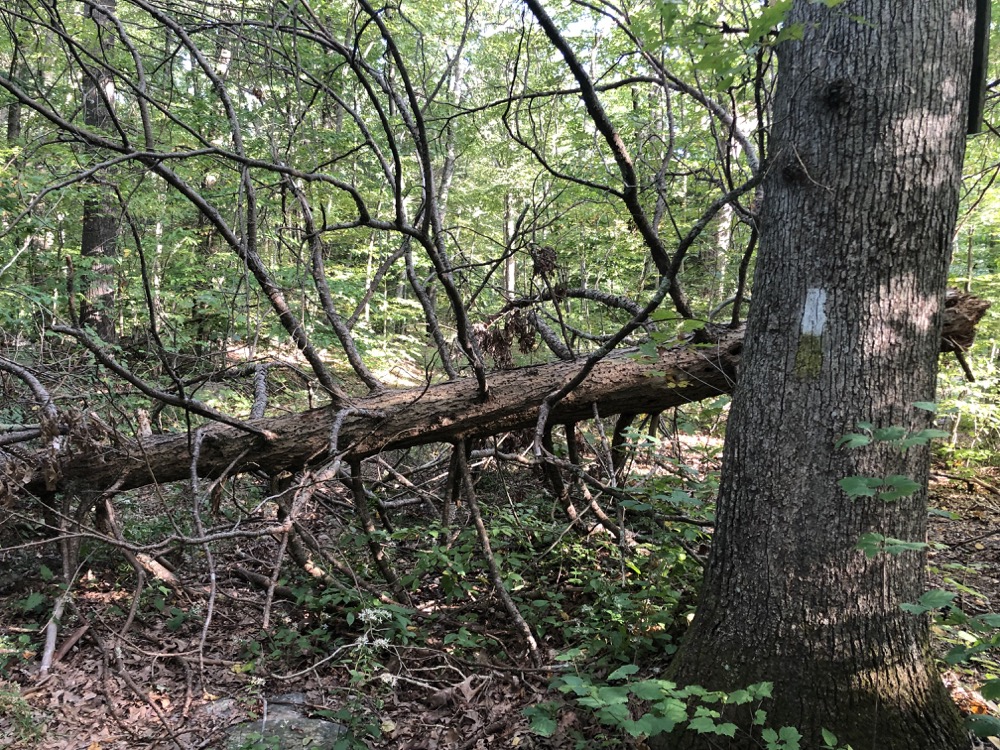 In 1636, the outcast Thomas Hooker and a hundred of his congregation followed the Old Connecticut Path in a two-weeks’ journey to the Connecticut River. There they founded the English settlement of Hartford. By 1643, documents called this trail the “Old Connecticut Path.” In 1672, with the establishment of a postal system, it became the first colonial post road.

I was apparently walking that old Native American path as I curled around down to Crystal Pond itself. It’s a lovely pond, but my hike took me directly away from it along the Cove Trail.

Straight up the hill through so close brush, but it’s clear that someone is maintaining this trail. It is blazed and while I don’t think too many people make this trek, it’s great that someone from either Eastford or Woodstock cares about it. Especially since once away from Crystal Pond, it doesn’t really go anywhere. 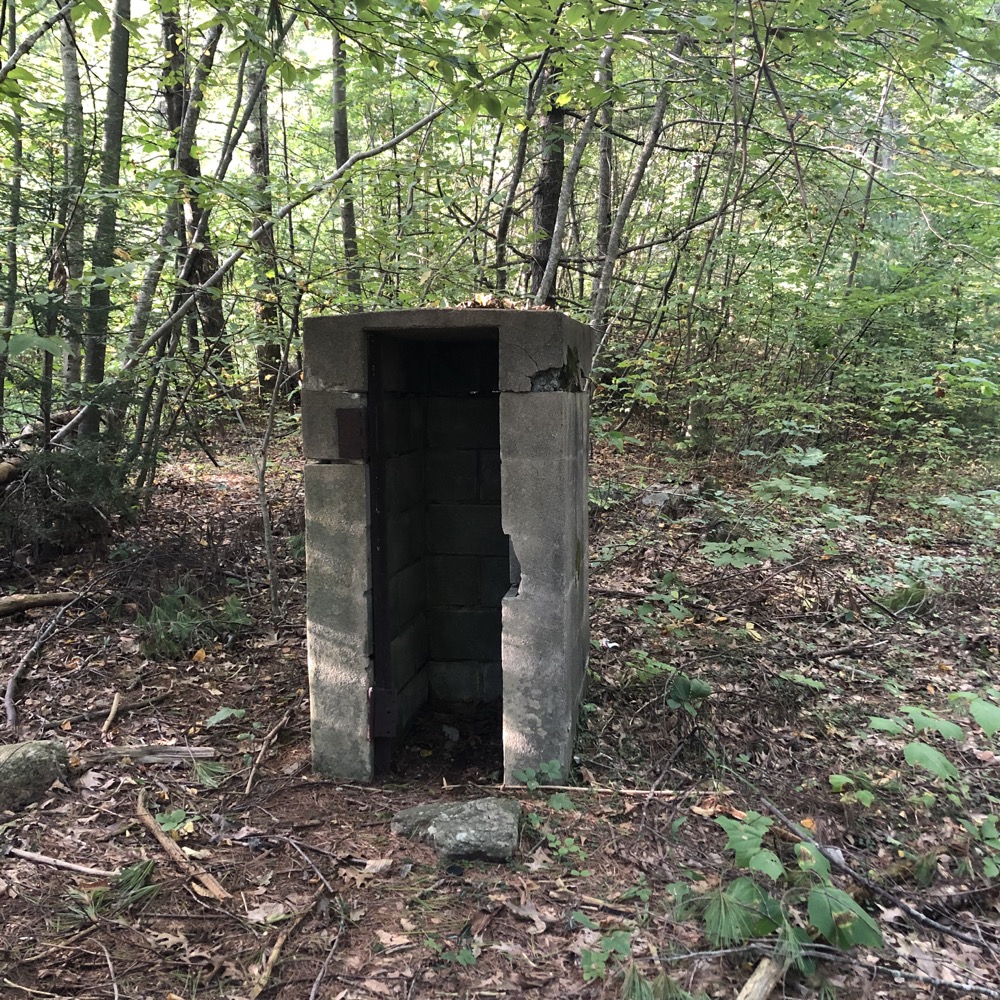 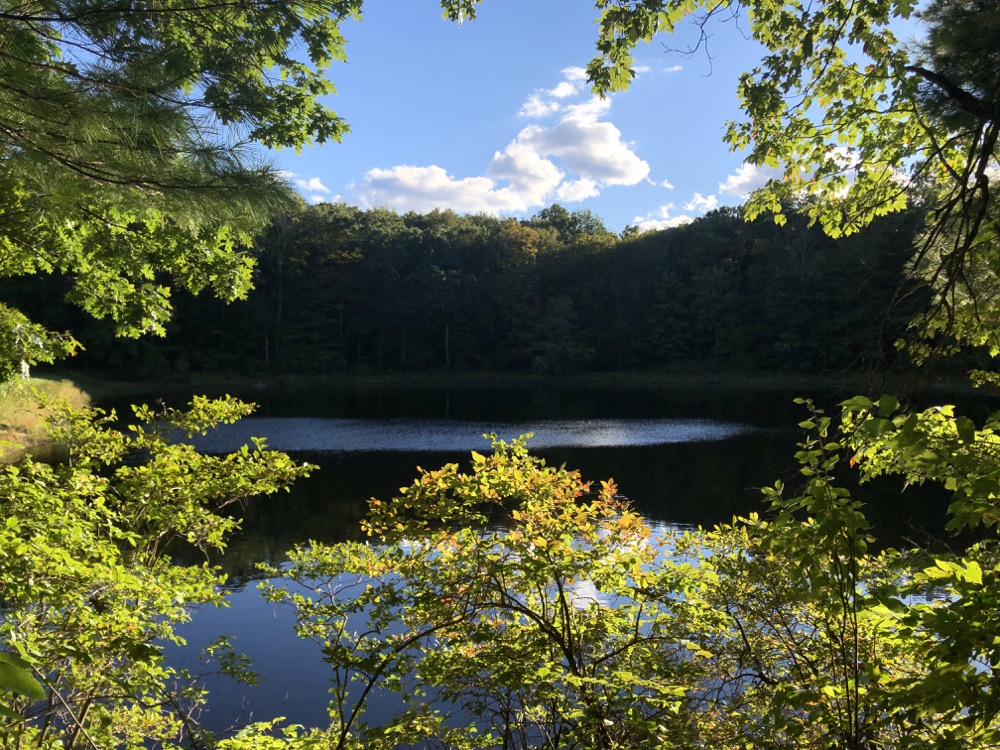 Okay, it summits the hill and joins an old woods road and then descends the hill, past some old stone walls, past an undefinable concrete structure in the woods (*reportedly an old gun safe from the scout camp days), then loops around on itself towards a pond. This is the trout pond of the Trout Pond Trail which I had apparently crossed over to without noticing. You can walk a sort of figure out simply by following the same white-blazed path.

The pond is pretty enough, and I left the blazed trail for no particular reason, but I did find a memorial stone for a Boy Scout guy that is probably seen by 3 people per year. So here to Allen Moore. I dedicate this page to him and I’m glad I bushwhacked to honor the man, whoever he was. 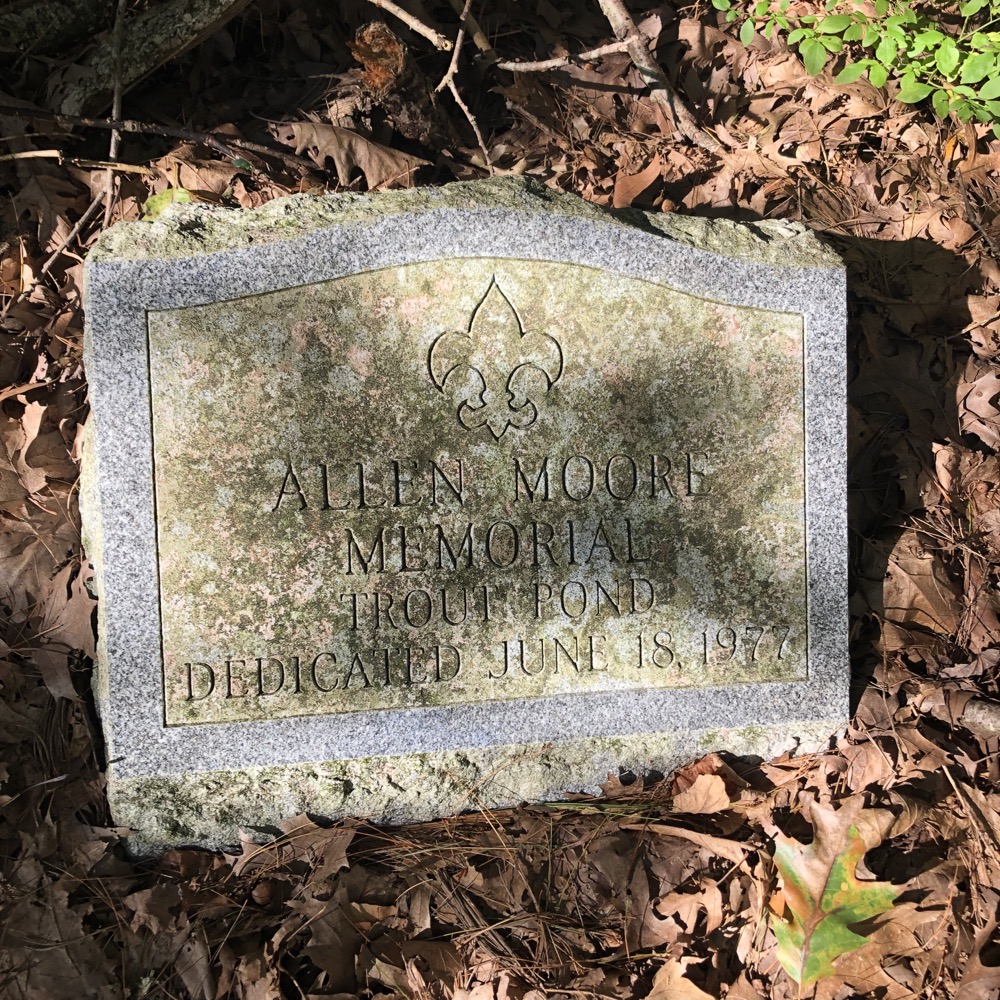 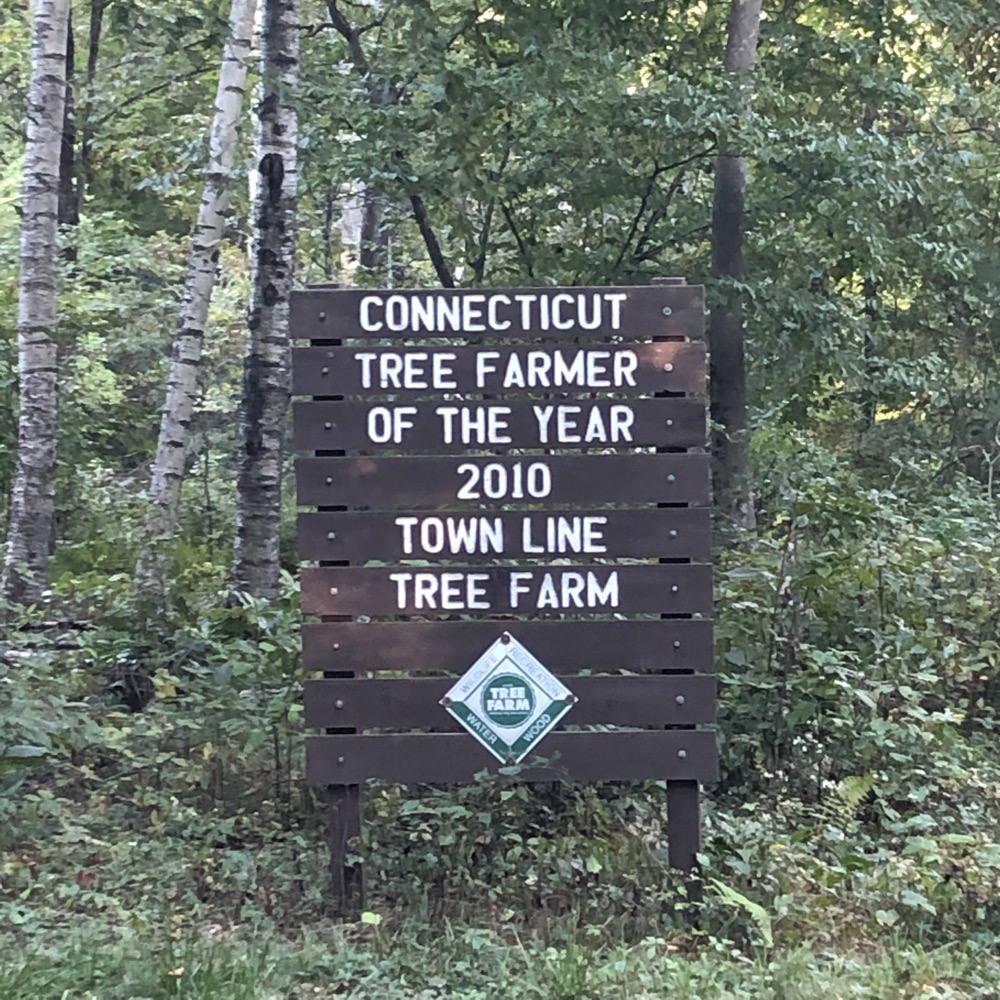 Instead of walking essentially the same mile back to the pond, I followed the old road down to Weeks Road which I walked north to my car. (The roads out here are more or less trails anyway. In fact, as I was hoofing it, a guy driving a tractor pulling a cart load of teenagers rumbled past me, coming from the park. Everyone smiled and waved and I think both parties wondered what the heck the other one was doing out here.)

Remember up top when I mentioned being on the wrong side of Crystal Pond and driving through Buell Orchards? That’s what happens when you attempt to find places in the hinterlands based on your memory of road names and veered off onto Crystal Pond Road in Eastford rather than continuing a bit to find the correct Crystal Pond Road in Woodstock a hundred yards away. 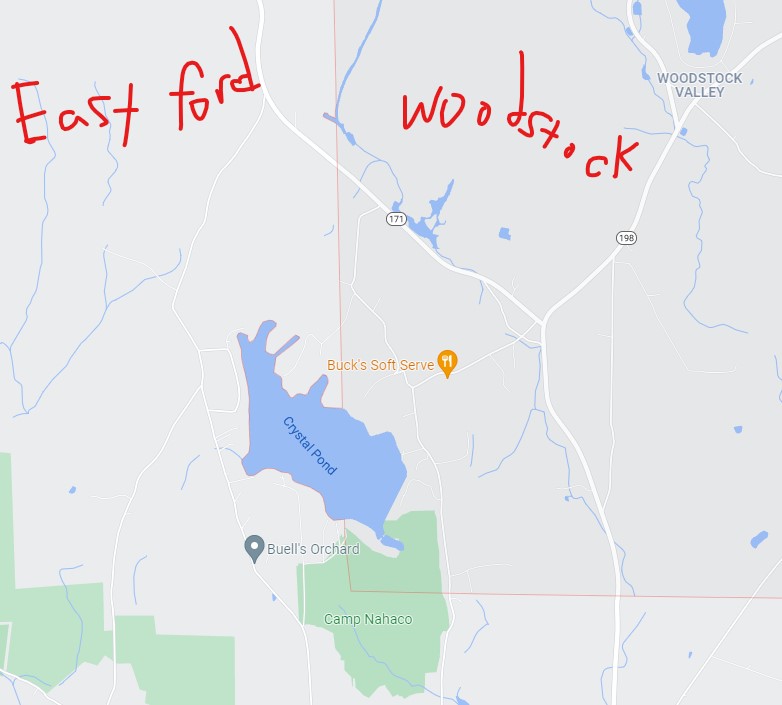 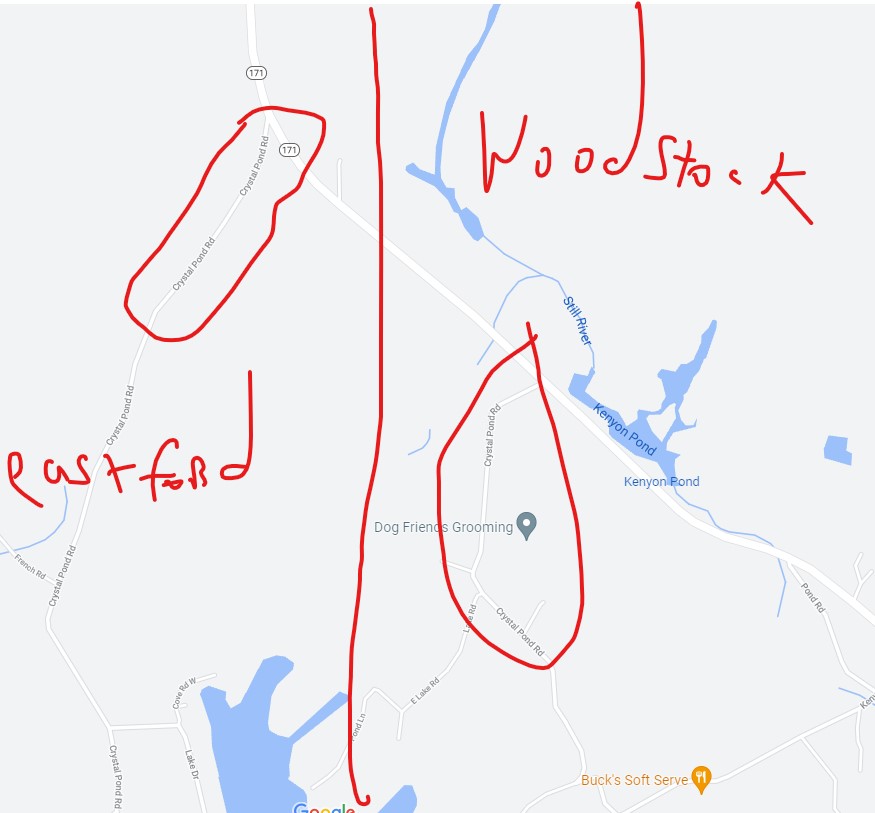 These are not the same road. It does not loop around the lake or something. they go to completely different places. You see what I mean about towns not playing nice with each other in Connecticut. Because of this, I wasted maybe eight minutes of my life on Eastford’s Crystal Lake Road instead of Woodstock’s, and had to sort my way all the way around and then back up. So stupid.

But the lake and the park are nice enough. You can canoe or kayak in the lake and there’s a large dining hall, which can be rented for any event. The disc golf course of course and… it’s just a nice place to chill. Once you calm down from taking the wrong road with the right name. Jerks. 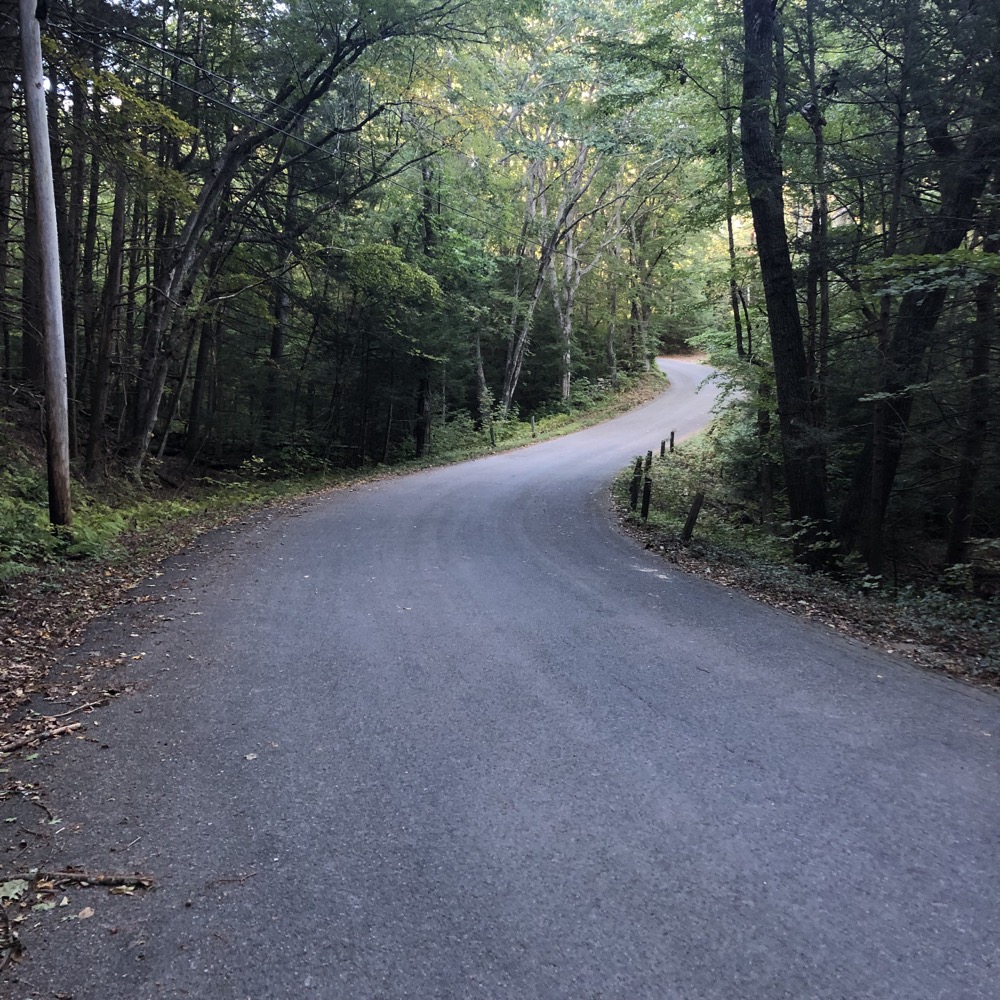 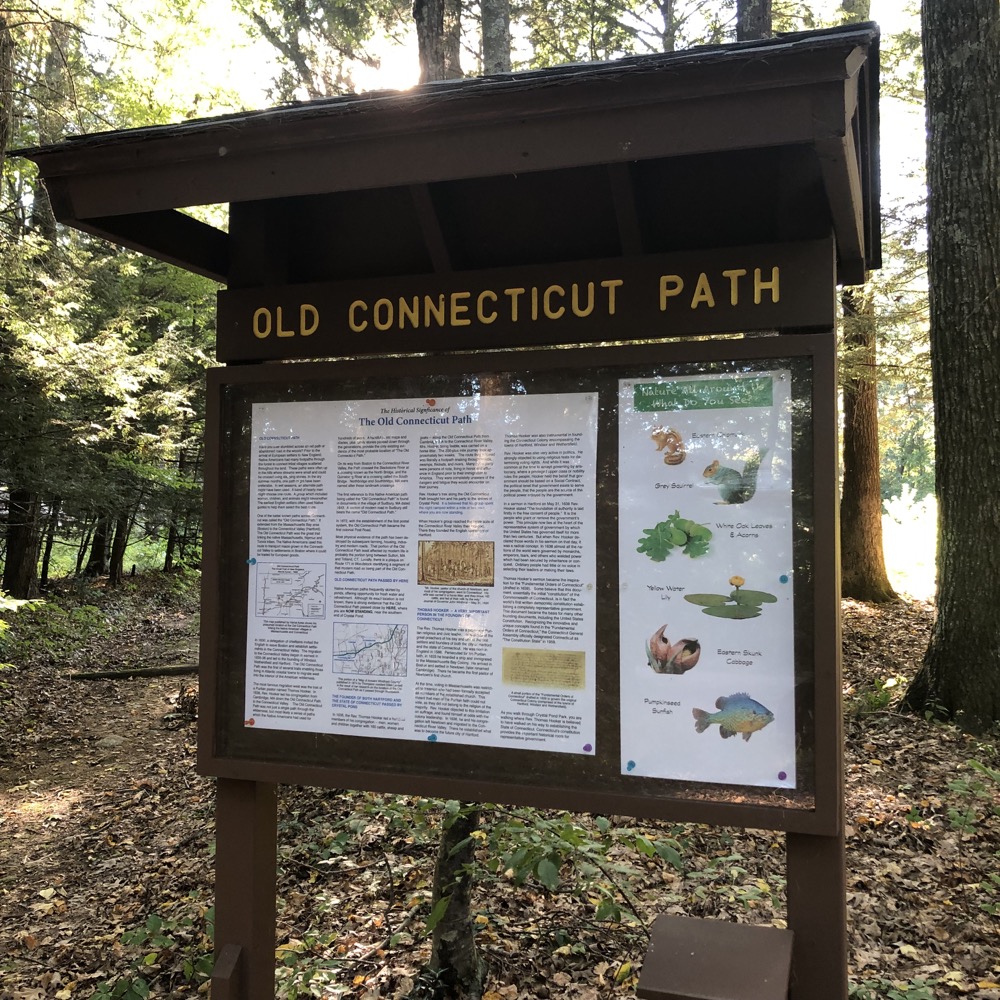