Freja Park is a really neat place to visit these days. Sure, it can be a jumping off point for any number of hikes or bike rides along a couple different bike paths. You can even take “secret” trails to some really cool spots that many are unfamiliar with as you head north and west towards Vernon. 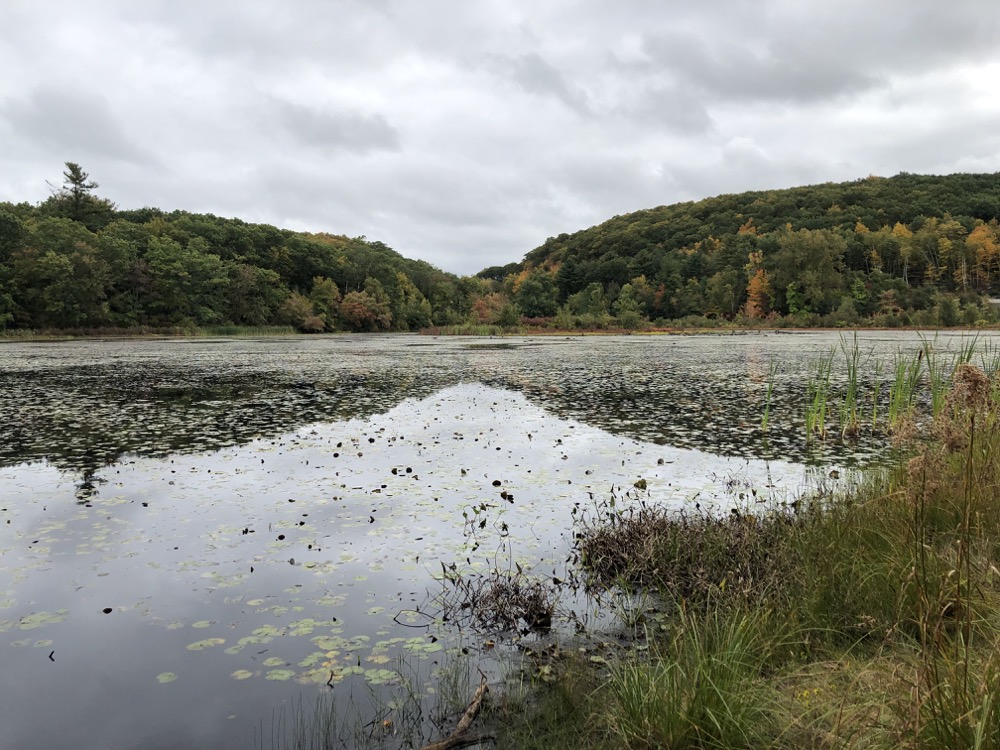 And we’ll get to all that in a minute. What I wanted to highlight up front was that Freja Park seems to me to be a reclamation success story. Peter Marteka, formerly of The Hartford Courant, chronicled these efforts in a 2000 article about the park, which had become a cesspit of illegal dumping and rogue ATV trails.

I walked through Freja exactly ten years after Marteka’s call to action article and exactly ten years before my experiences below. And in 2010 it was a lot better than it was in 2000, but only half as good as it is in 2020. (Which makes sense, I know, but my point is that it’s cool to see the clean up efforts have proven successful.) 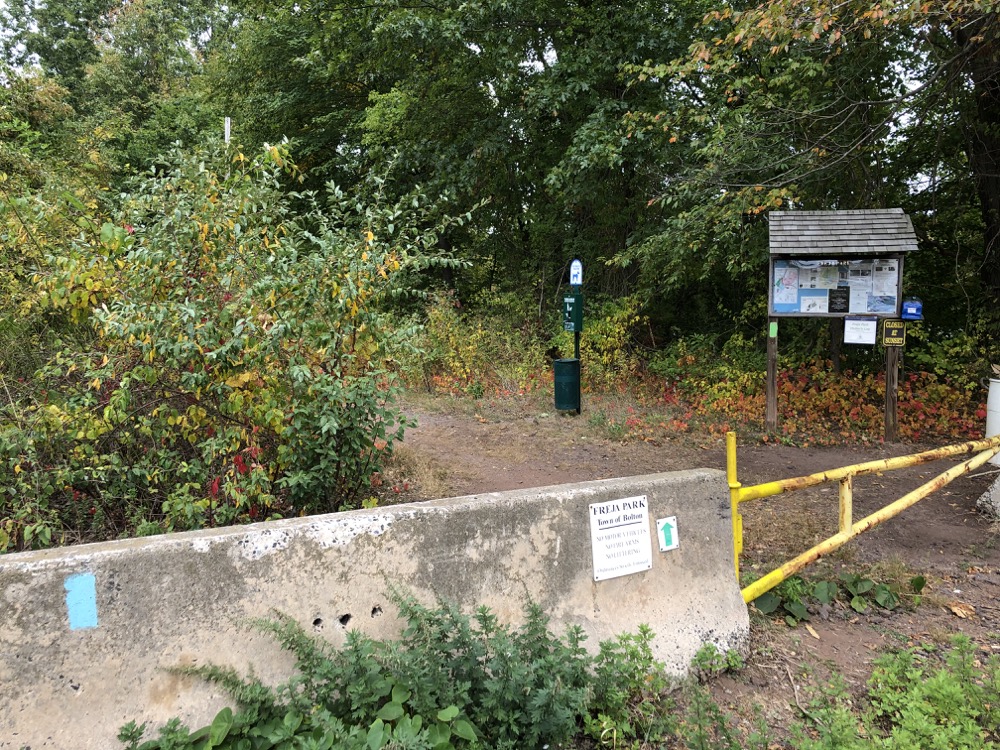 Over the years, [the head of the cleanup effort] says the park has been “taken away” by illegal dumpers who use the park as an unofficial transfer station and all-terrain vehicle riders who treat it as a private playground ripping up the trails and creating new ones where they are not supposed to be. Mother Nature has also done her share, cutting massive gullies in the earth with the runoff from summer rain storms. 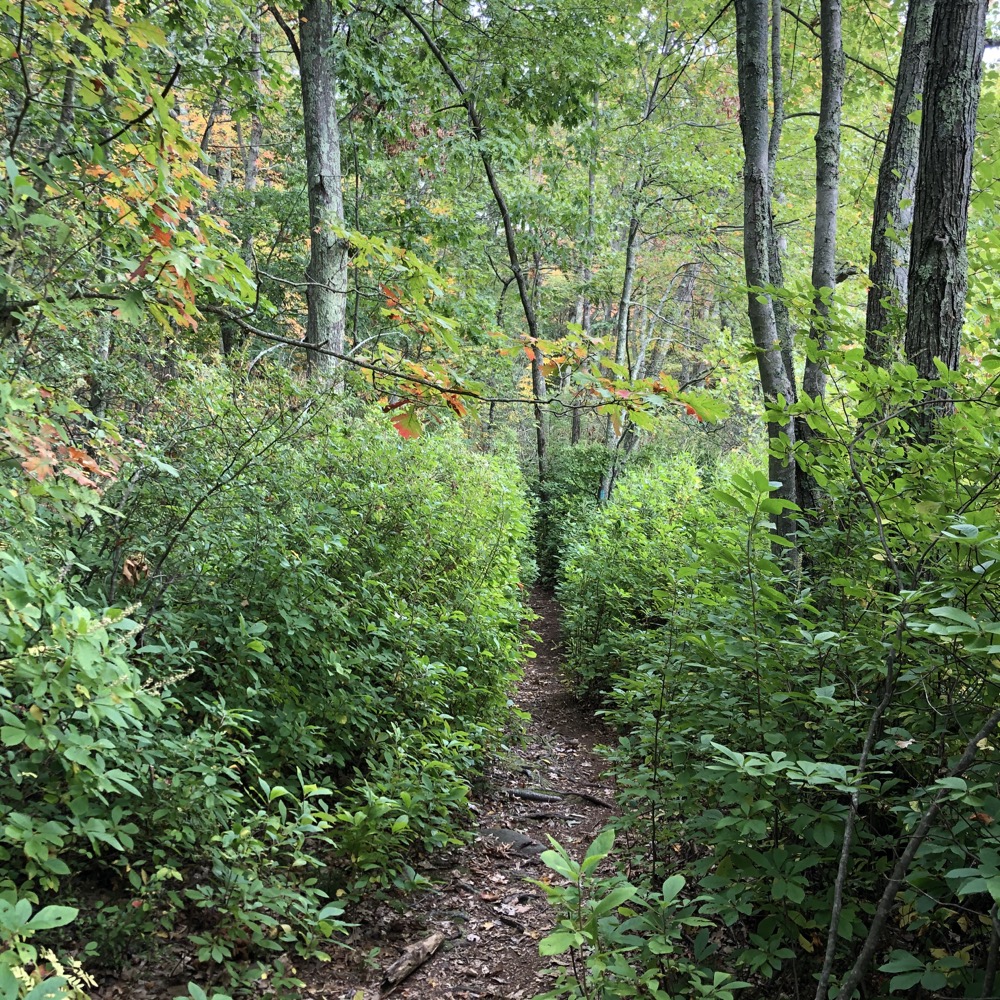 We hiked along the old road entrance to the very overgrown and very abandoned Manchester Drive-In. You’d think towns would force businesses to clean up their mess when they close, but apparently not.

In 2020, I entered the park the same way, via the Shenipsit Trail. Having hiked every trail in Freja Park now I can say that the cleanup efforts are an unmitigated success. I’ve heard that the crumbling buildings of the former Manchester Drive-In theater are sometimes used for shelter by homeless folks, but the late summer overgrowth hid all of that from me in 2020 – if that’s even still true. 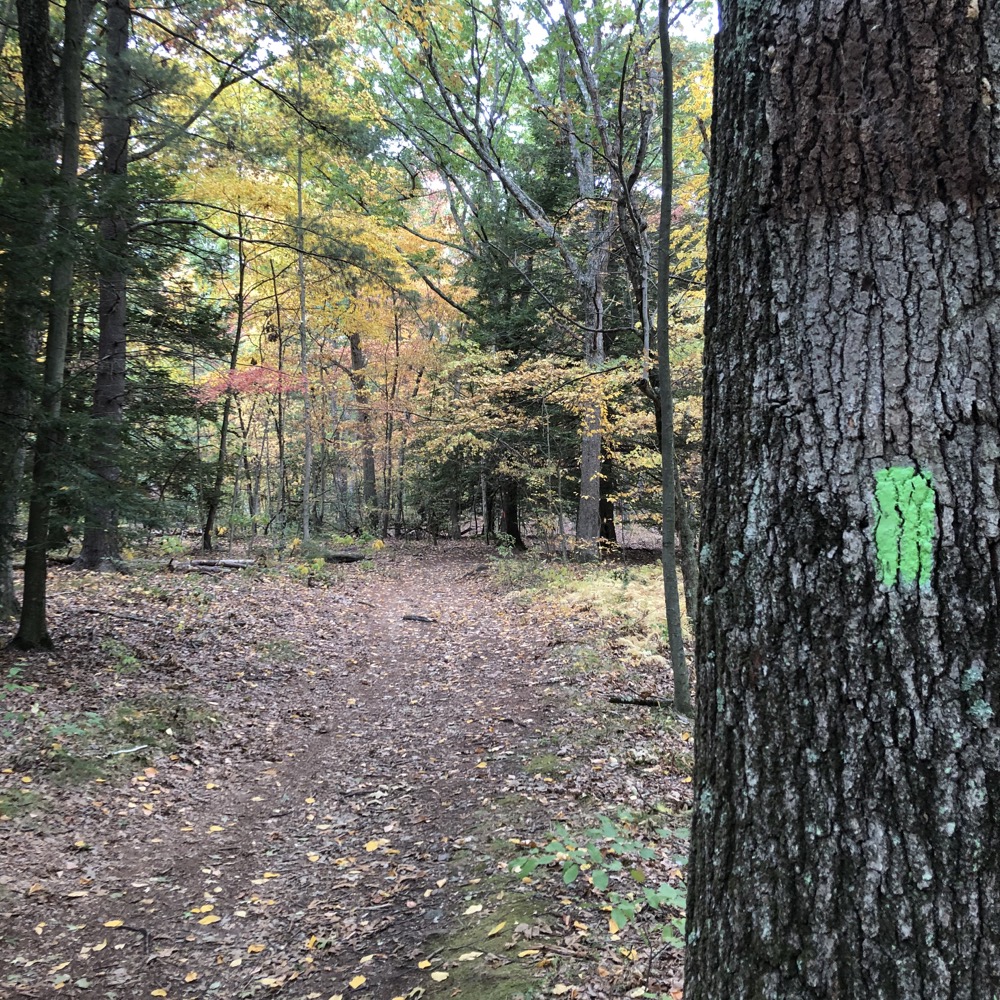 Since I’d already traversed the length of the park via the Shenipsit a decade prior, I was more focused on the other trail here. Sure, the S’nip travels along the pond’s edge and then up to the overlooks and is very much worth your effort, but I found the other option enjoyable for other reasons.

Freja Park shares a boundary with Bolton Notch State Park, through which The Hop River State Linear Park travels. Which sounds weird, but Hop River State Park Trail is a rails-to-trail state park. Not only that, but the Charter Oak Greenway passes through Freja Park’s parking lot – another multiuse path that connects to The Hop River Trail. 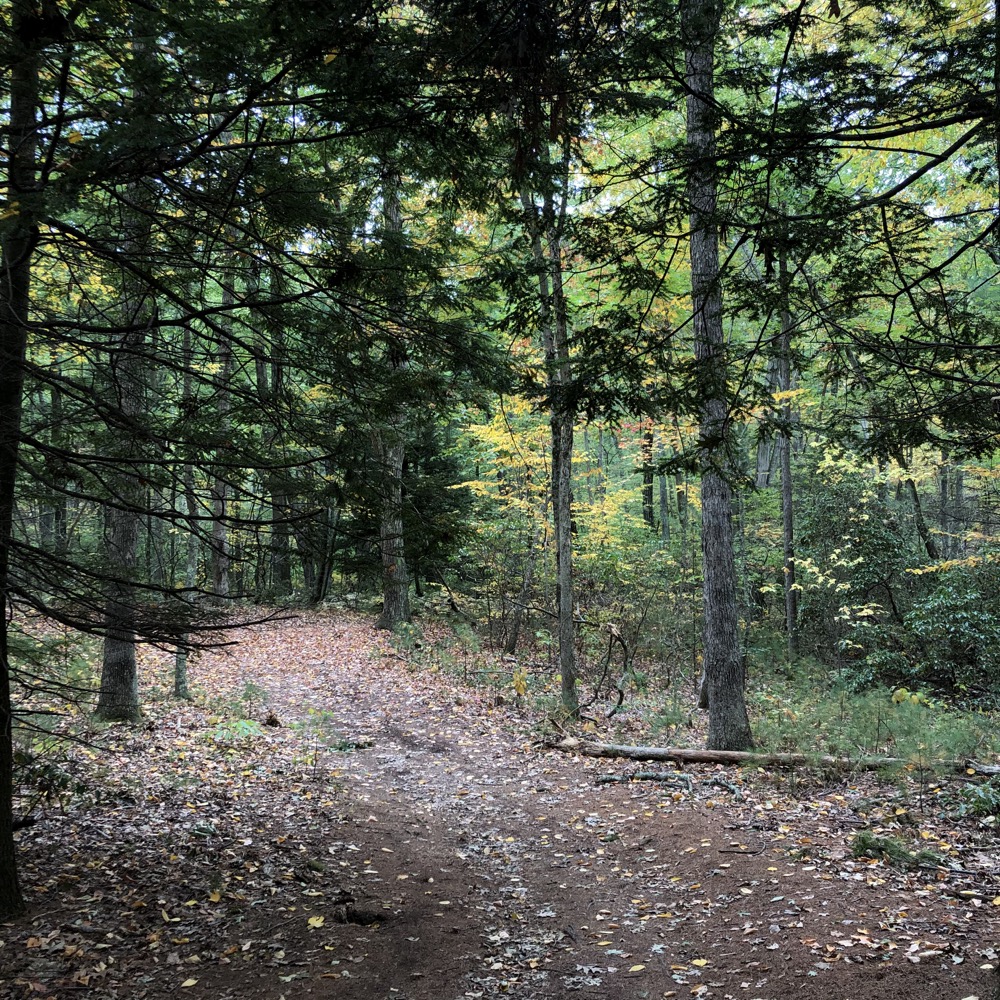 I left the Shenipsit and followed the green blazed trail north through the park. Much of the path here used to be paved, and its clear it used to be an access road of some sort. It’s wide and fairly level, but also very pleasant to walk – especially in early fall just as the leaves were beginning to change. 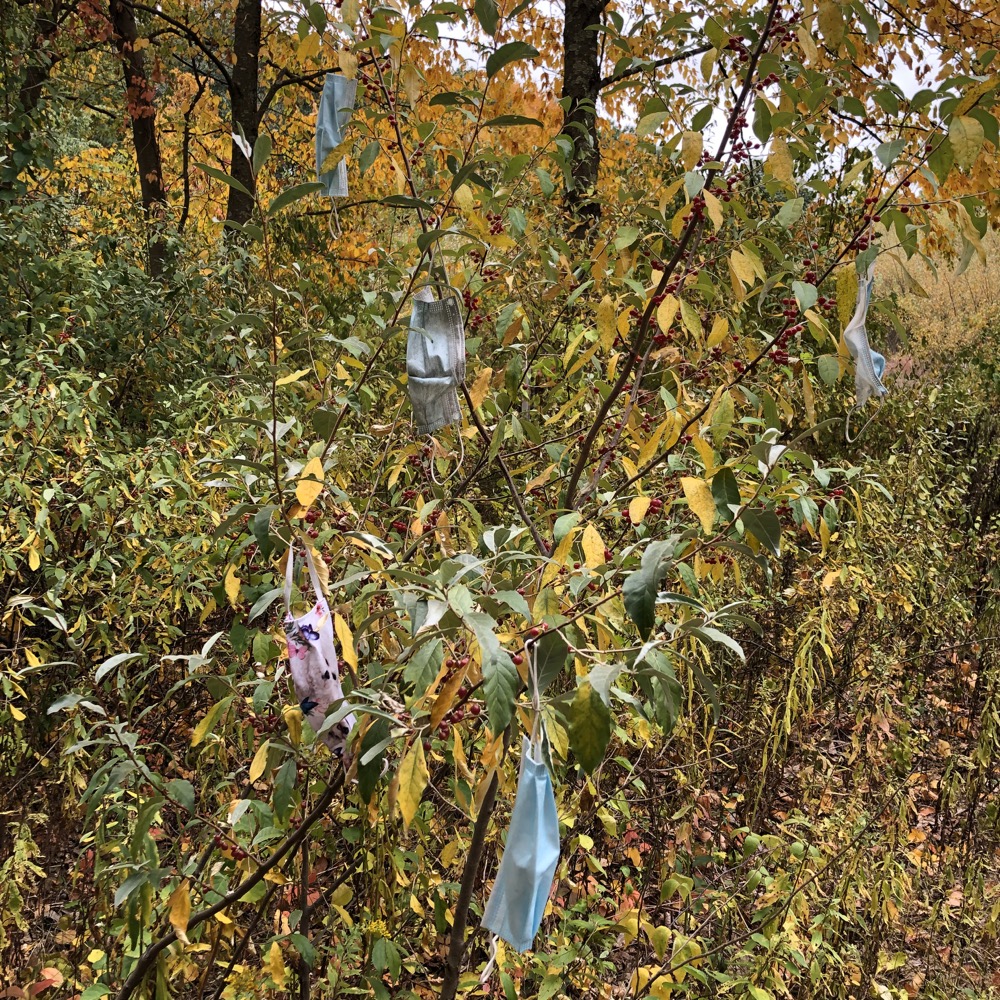 Pandemic Bush (don’t do this) 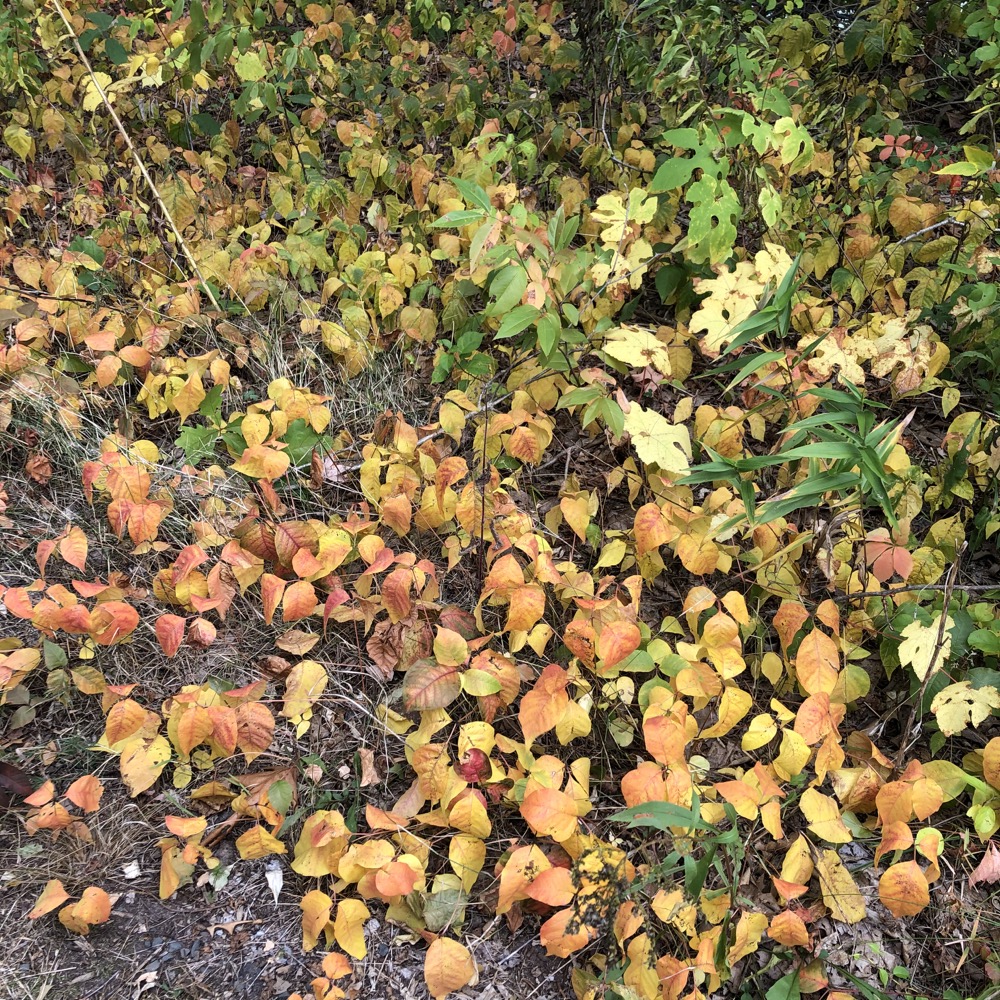 Even the most evil plant on earth looks pretty in September

There are some ups and downs, but nothing too drastic and I found myself sort of just lost in a fog of early autumn beauty. Everyone loves their red maple leaves, but I’ve always been partial to the yellows of birches and beaches. There’s an area of low-lying land that I’m sure is rather wet in non-drought conditions, but the green trail is only about a third of a mile long once into the park proper.

At the far northern end of the park, the green trail reconnects with the blue-blazed Shenipsit which allows for a nice loop hike back to the parking lot. While there are some parts of the S’nip on top of cliffs, this is a nice introductory hike for kids. (The southern loop in Bolton Notch State Park is as well, just a little bit more difficult.) 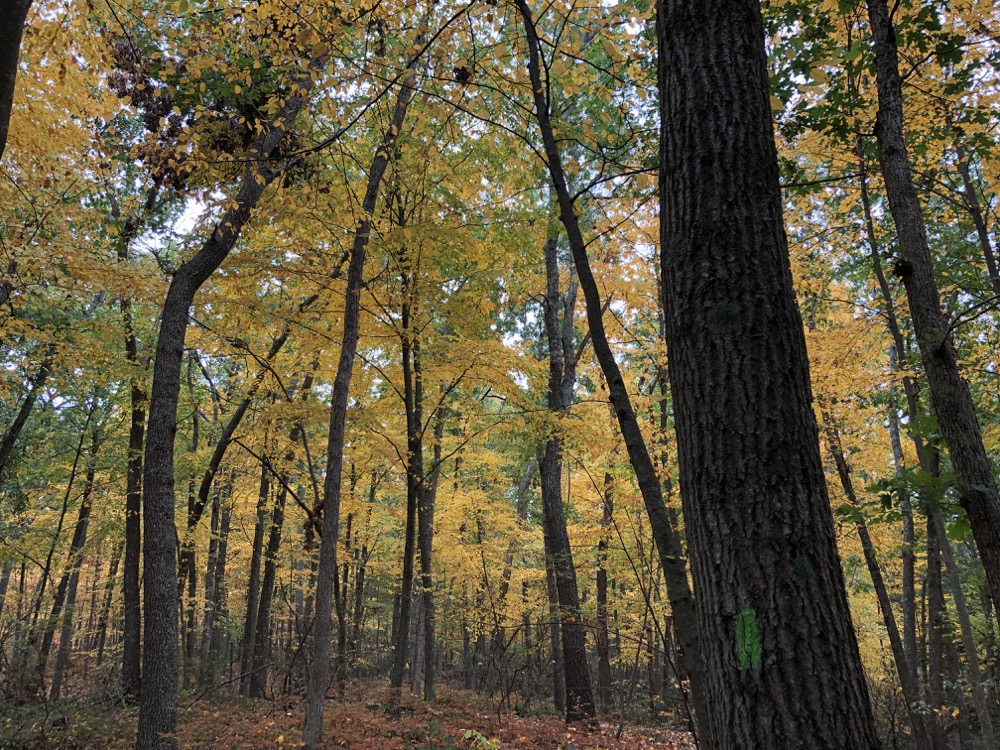 However, instead of simply heading back, I was curious about some clear trails that spoke off of the green trail towards its northern end. While not blazed, they are easy to follow and frequently traversed.

The first two head in a westerly direction. I followed one with the clear idea that it heads to the Risley Pond loop trail and Box Mountain. It does. There’s a swath taken out of Box Mountain’s ridgeline that I think was probably cleared for new housing that never happened. The unblazed connecting trails may have been created by mountain bikers, and they are a cool option to have up here. 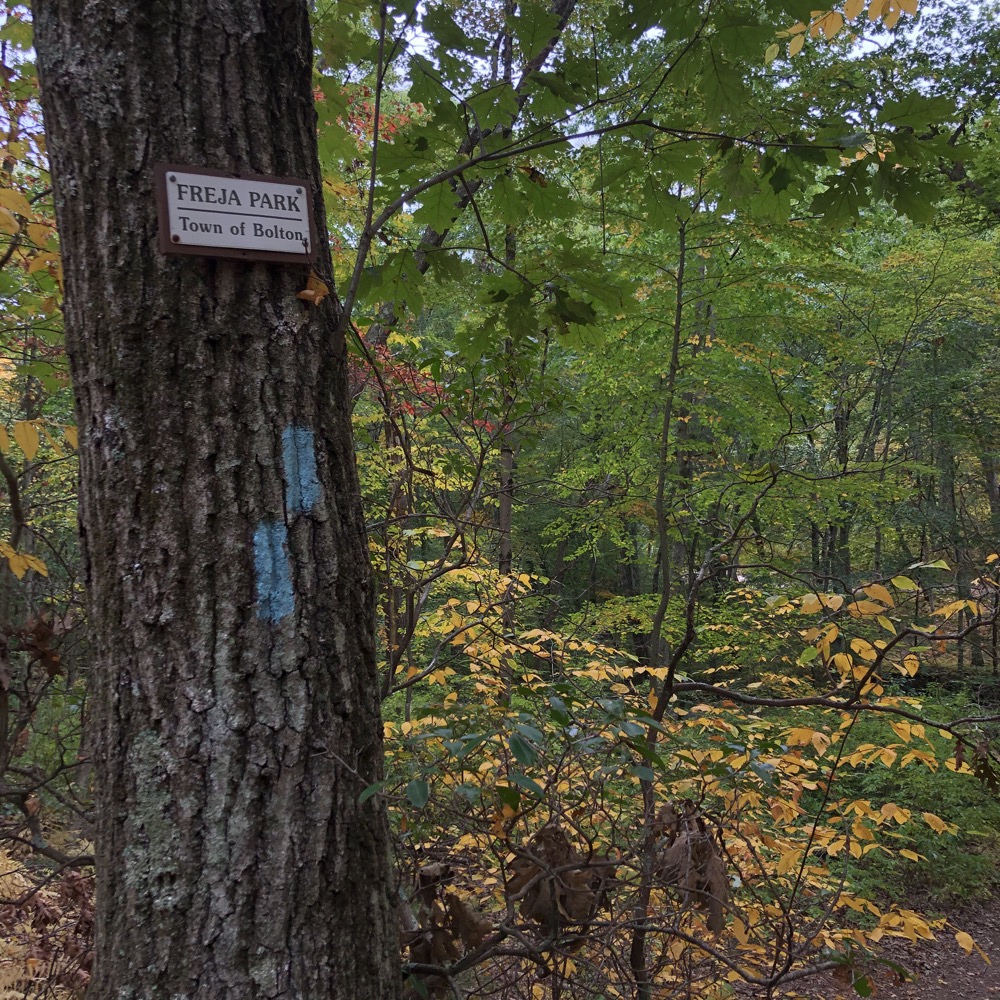 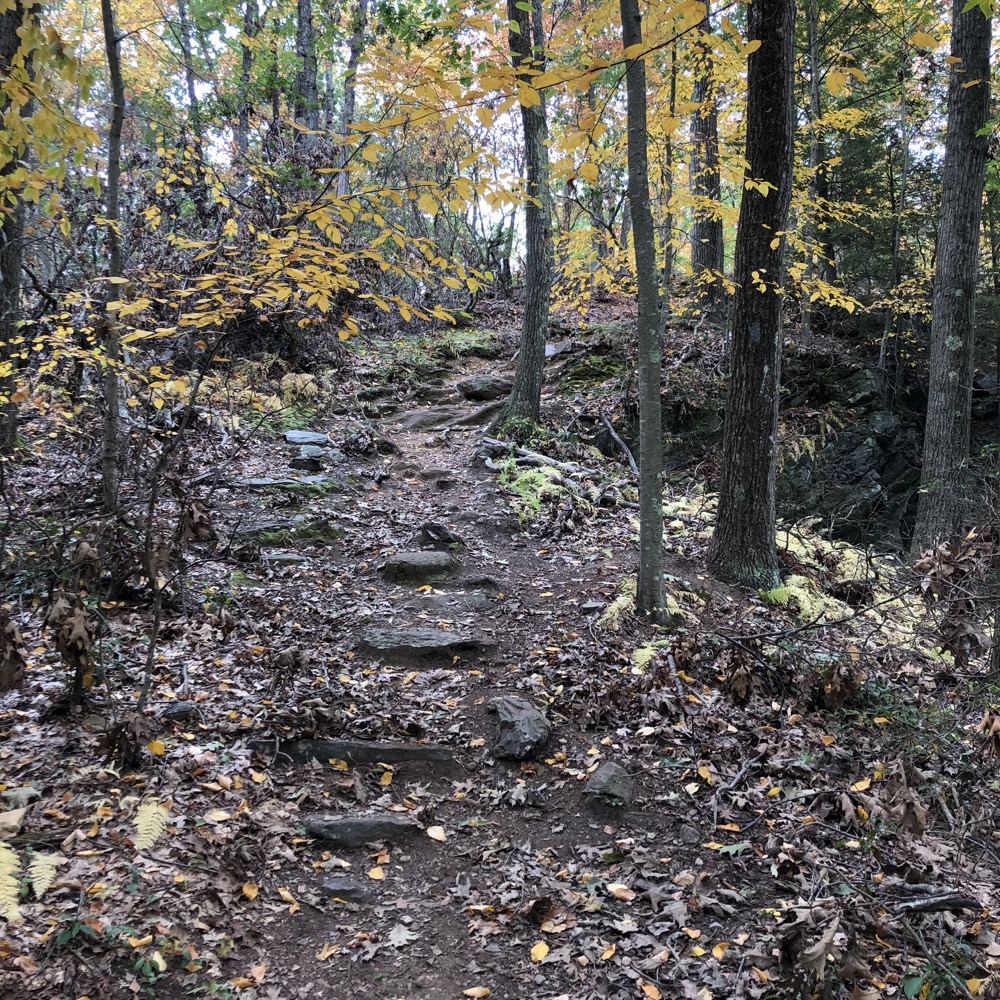 However, back to the green trail just before it makes a sharp right hand turn to the Shenipsit, another unblazed trail heads straight – straight up a steep incline. This is not a mountain biking trail. It is too steep for one, but after a few minutes heading north on it, the fact that it edges along the top of a 60-foot cliff wall makes that point clear.

This unblazed, unofficial trail is pretty awesome. It takes adventurers north of Freja Park’s boundary, is west of Bolton Notch’s boundary, took me into Vernon, and… I have no idea what entity owns these woods. But the trail is really cool. 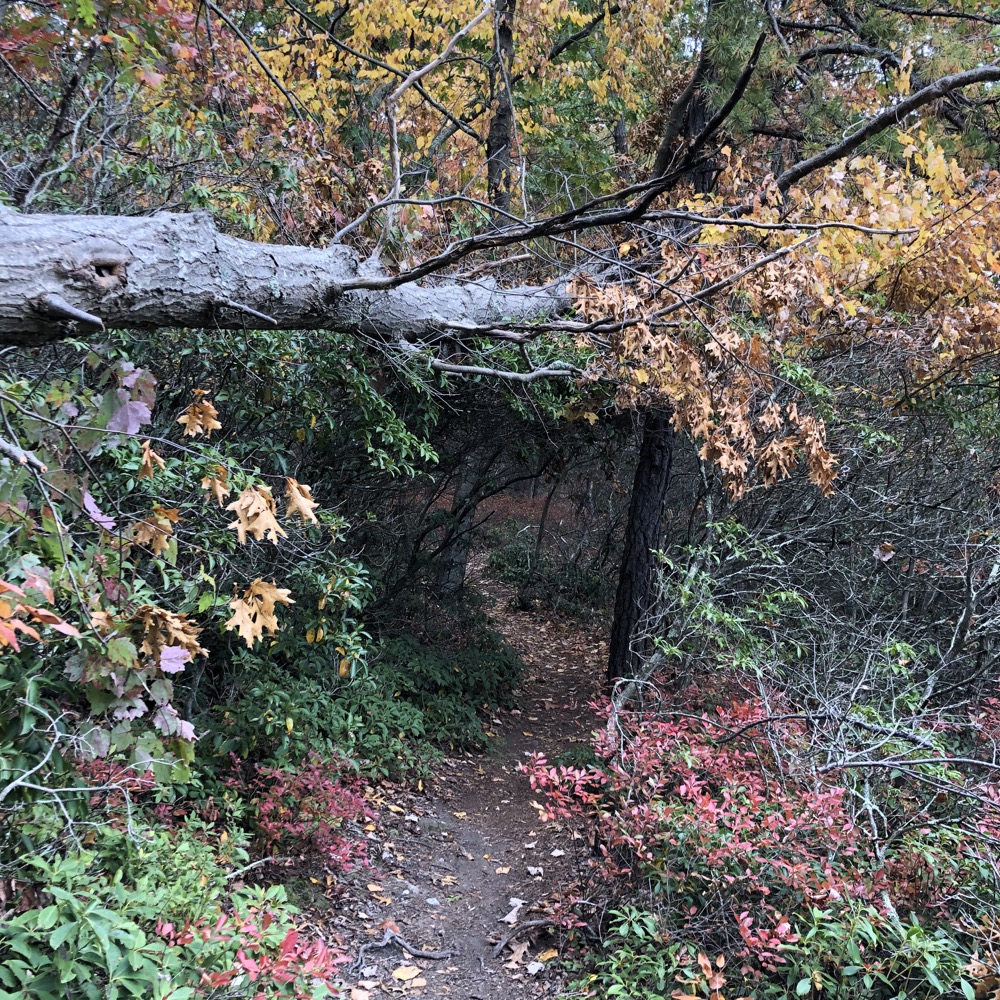 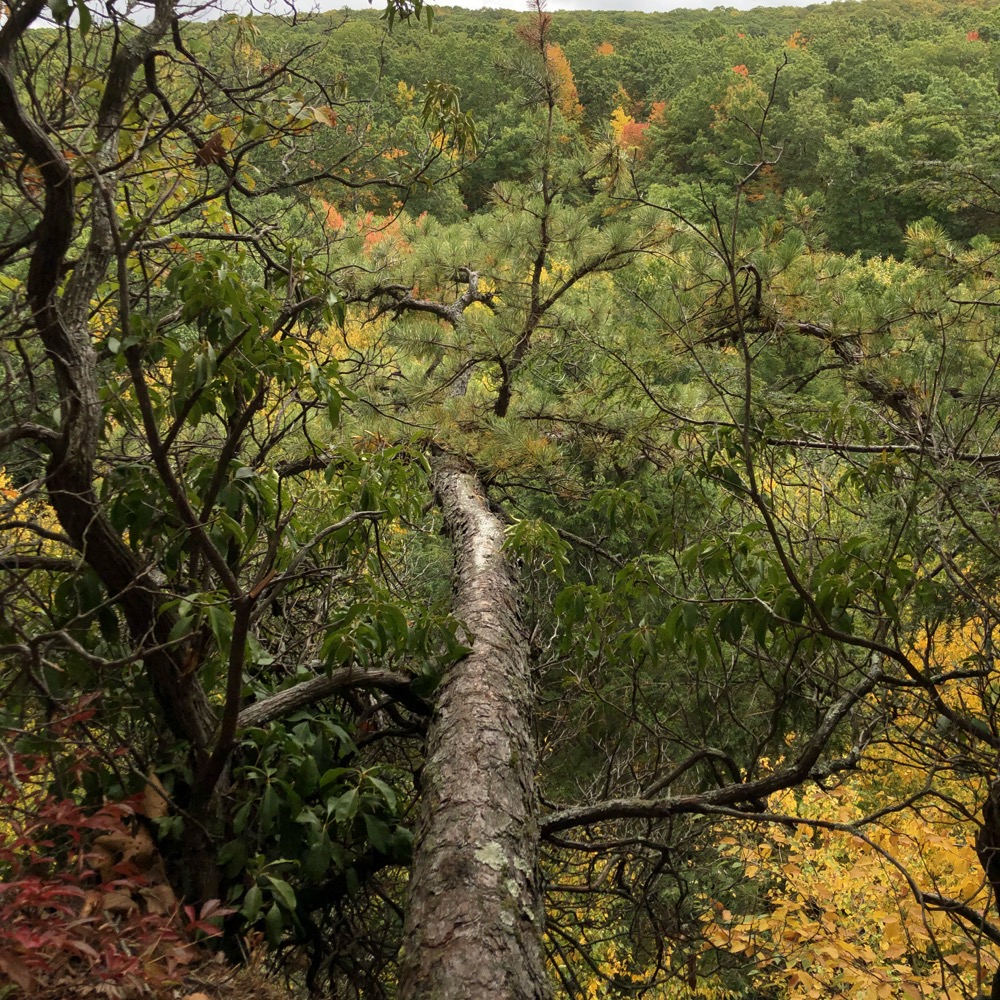 It travels the cliff top above the Hop River Trail; scurries around blueberry bushes and mountain laurel and seems to never end. In fact, it continues, faintly at times, all the way up to Valley Falls Park and if you so choose, the Northern Connecticut Land Trust’s AK Webster Preserve and Vernon’s Boulder Ridge Park.

But back to Freja Park in Bolton. As you’ve figured, this place is more of a jumping off point than anything else. But that’s a reason to love it, not trash it. 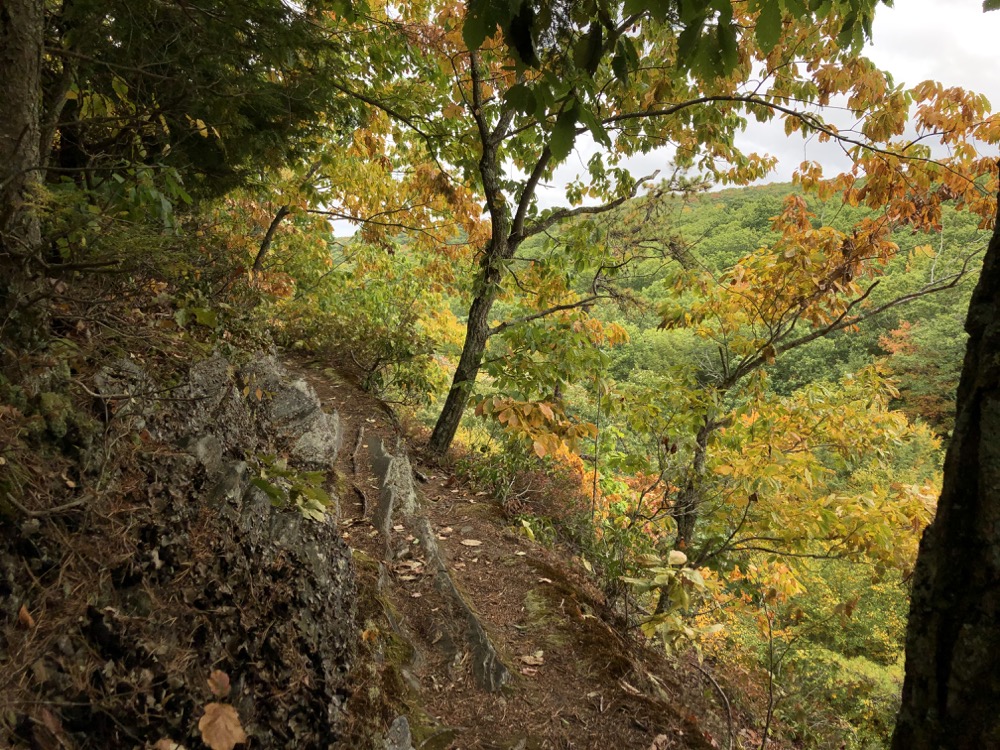 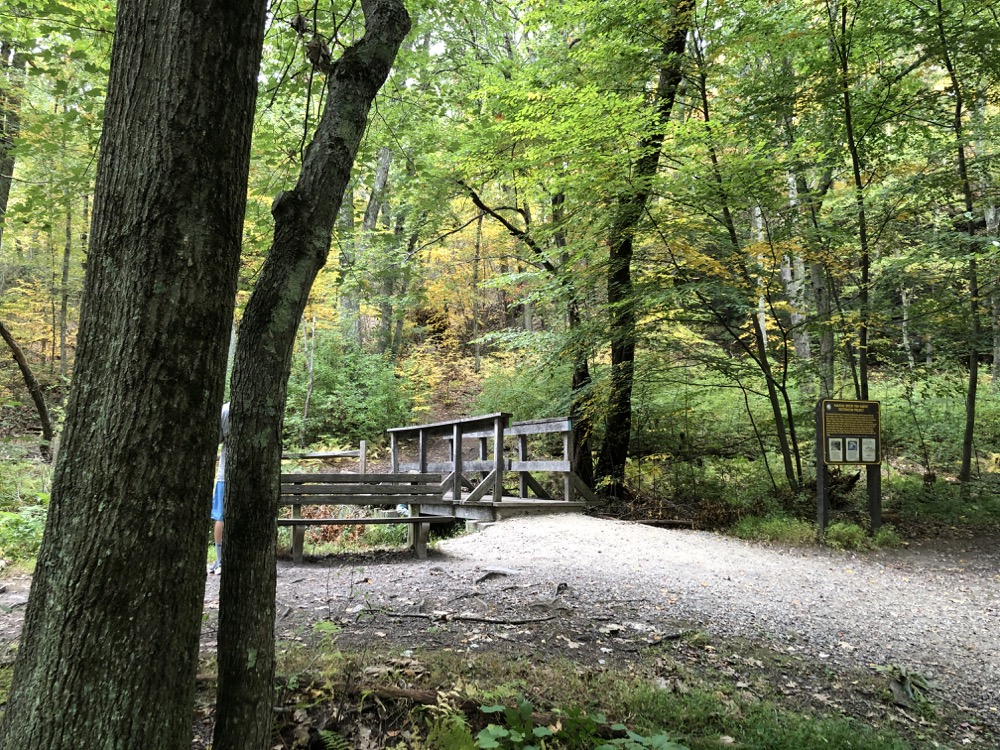