There’s a lot going on at Fort Griswold Battlefield State Park. A pretty park on the bluffs above the Thames River with an important history, a climbable tower, a Connecticut Freedom Trail site, and a little museum. Let’s be honest; not too many people care too much about the little museum.

But I care about the little museum. 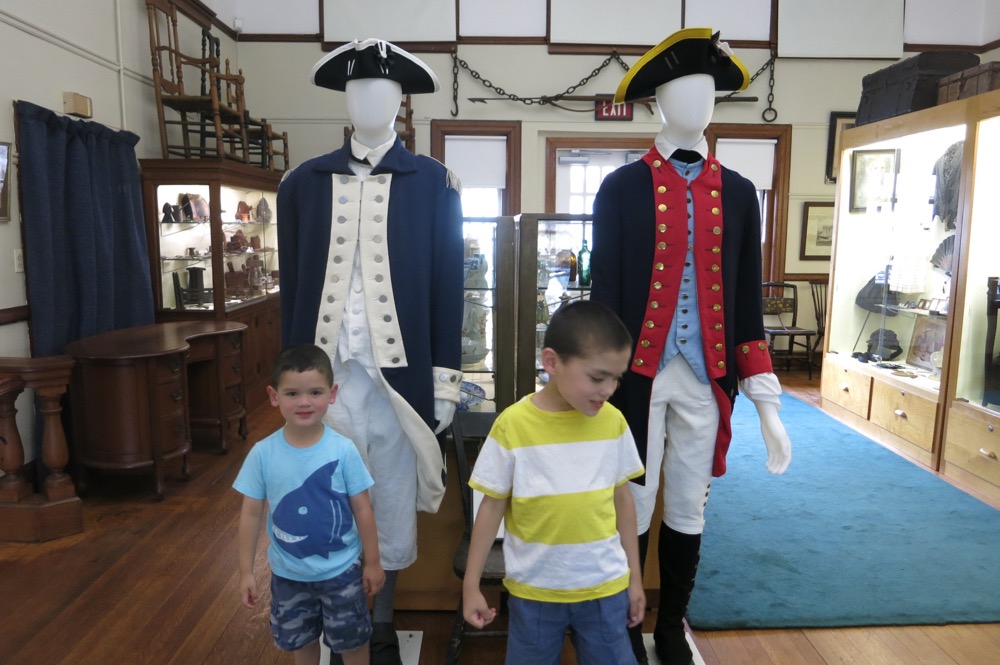 And Revolutionary War historians care about the battle that took place here. And Connecticut historians certainly do as well. The Battle of Groton Heights occurred in September of 1781, after Benedict Arnold had become a Benedict Arnold. It was the “largest Revolutionary War battle in Connecticut,” though I’m not sure what “largest” means. Most people involved? It couldn’t have been the longest, that’s for sure.

Arnold, who was grew up just a few miles away in Norwich, commanded the British troops who came to Groton to win. No quarter. 800 soldiers on the Groton side of the Thames south of the fort and 800 more across the river in New London. The revolutionary rebels at the fort had a whopping 165 men – militia and random townsmen – under the command of Colonel William Ledyard. Real fair fight. 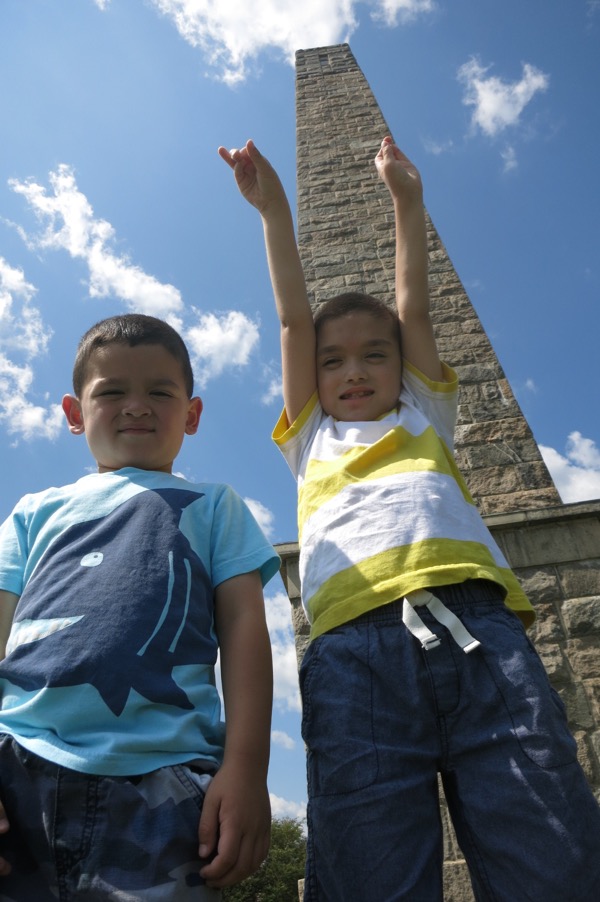 The Redcoats did allow for a surrender before any shots were fired, but Colonel Ledyard refused the offer, expecting I don’t know, tanks and a nuclear sub to roll up at any moment? The Brits actually offered twice. Colonel Ledyard responded “we will not give up the fort, let the consequences be what they may.”

The consequences were not pretty. Sure, the proto-Americans had a nice little fort on a hill above the river, but… c’mon. The British overwhelmed the fort, even capturing a cannon, turning it around, and blowing up stuff with it. The fortfolk did kill British Major Montgomery here, but within about half an hour the professional troops marched right in the front gate and took over the fort. It was at that point Colonel Ledyard was like, “yeah, okay, I should have taken your first offer.” He surrendered. 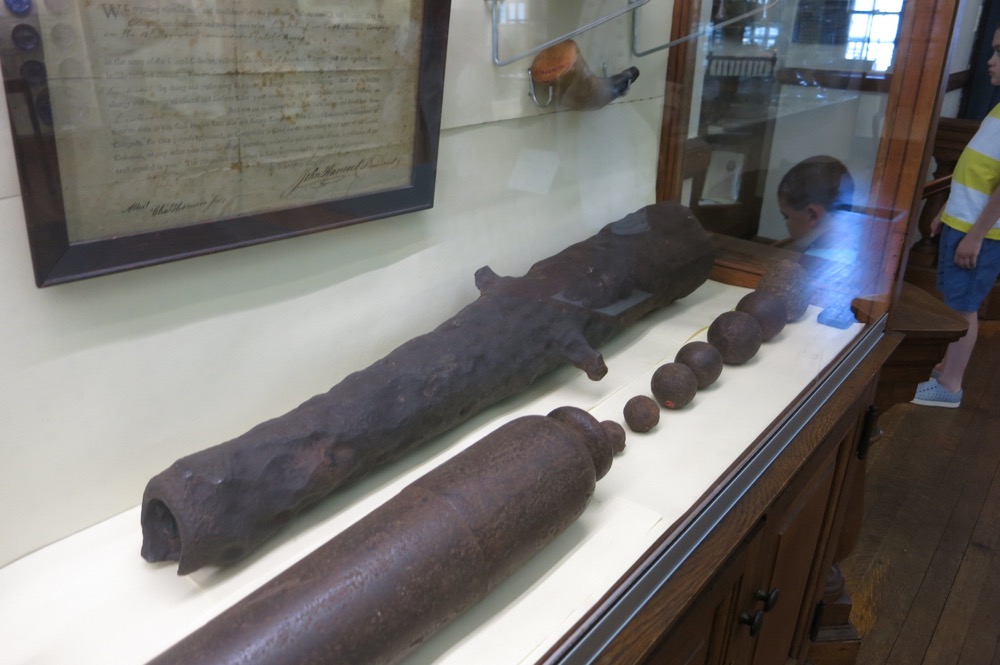 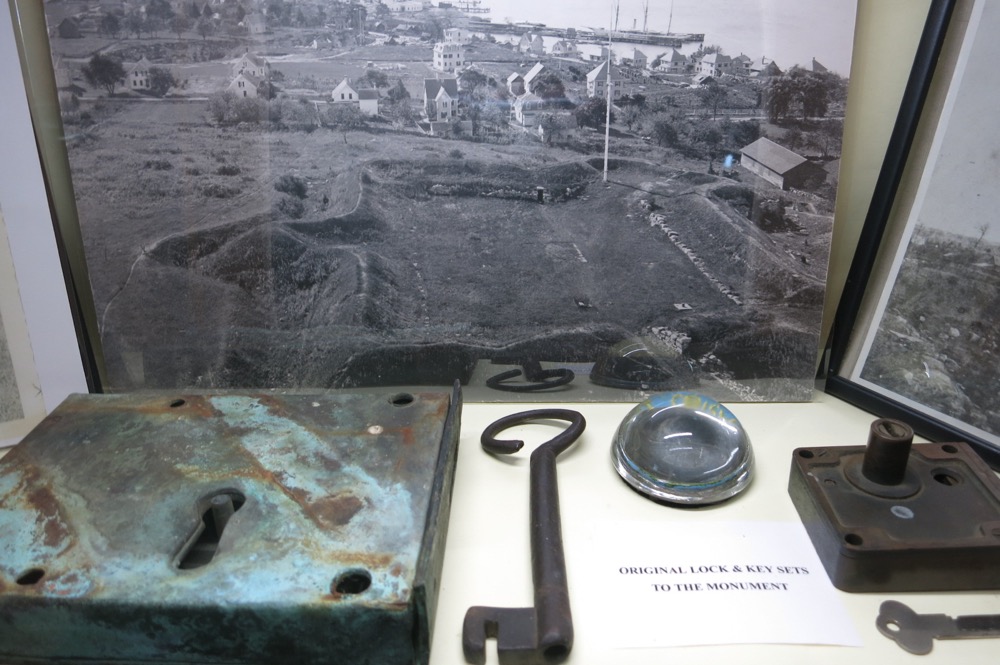 The message didn’t quite reach all the skirmishing troops around the fort. American and British accounts differ, but we do know that Colonel Ledyard was killed after he surrendered. Americans claim the British troops went nuts and kept killing everyone and that Ledyard was run-through with his sword after he surrendered. That sword is here, in the library. The British probably downplay this battle because they were mad that this ragtag group of Colonial men actually killed 51 of their men and they sought to double the tally.

Americans refer to the battle as a “massacre” and the British simply note it as a quick skirmish. Then they burned down all the houses and businesses along the river. War is hell. Speaking of which, here’s a fun little post-battle anecdote:

American wounded were placed on a heavy ammunition cart, which broke away as it was being moved down the hill and crashed into a tree, causing terrible suffering to the men inside. 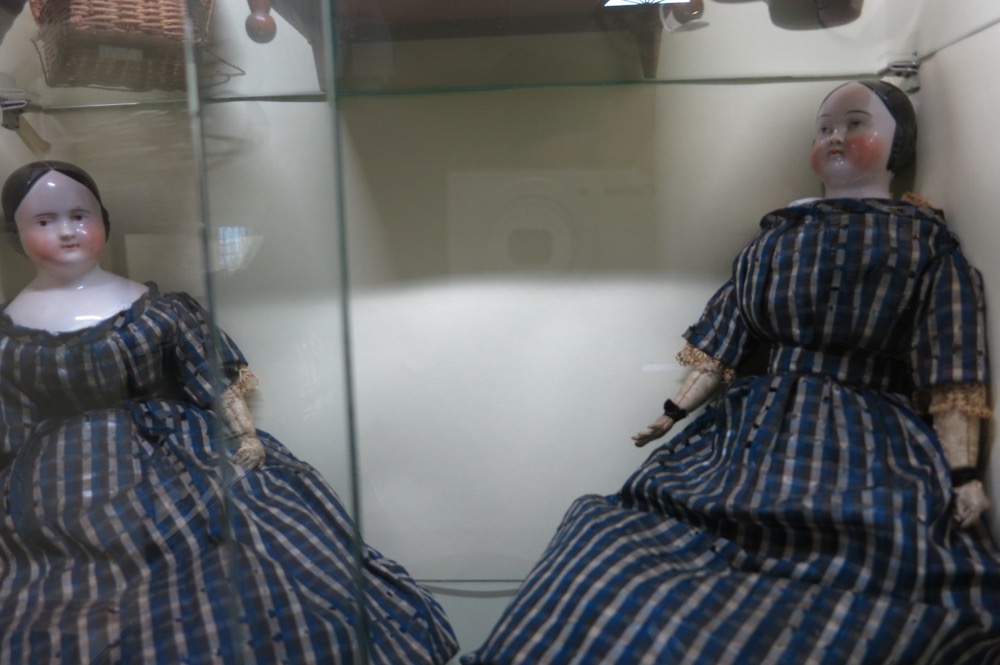 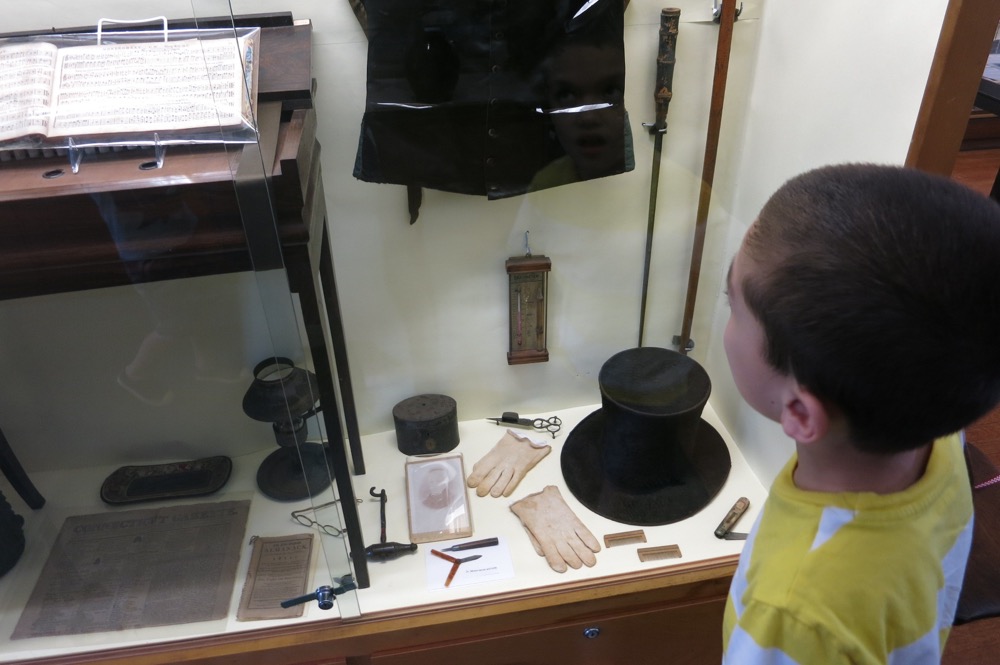 The fort was kept up for a while and and a caretaker’s house was built and became the meeting place for the Daughters of the American Revolution. The DAR began donating artifacts and mementos way back in the late 1800’s – fast-forward to today and this is where the museum is housed today, and those mementos are still here.

The exhibits are not all Revolutionary War related. There lots of historic Groton things, but for me, it’s the original 1781 stuff that I found most interesting. There are relics of the whaling industry as well as period furniture and china. 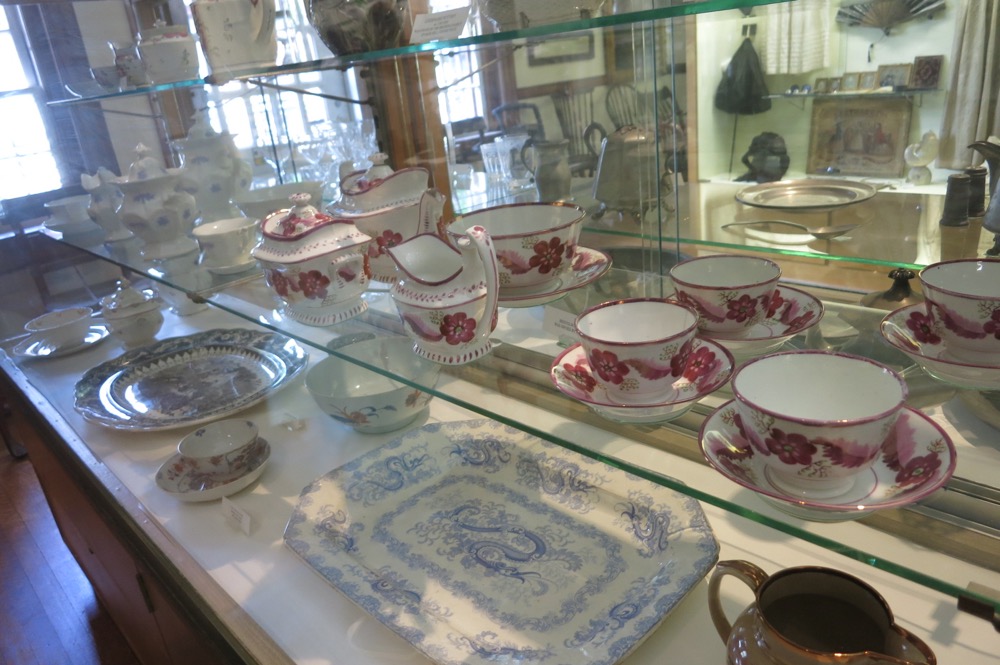 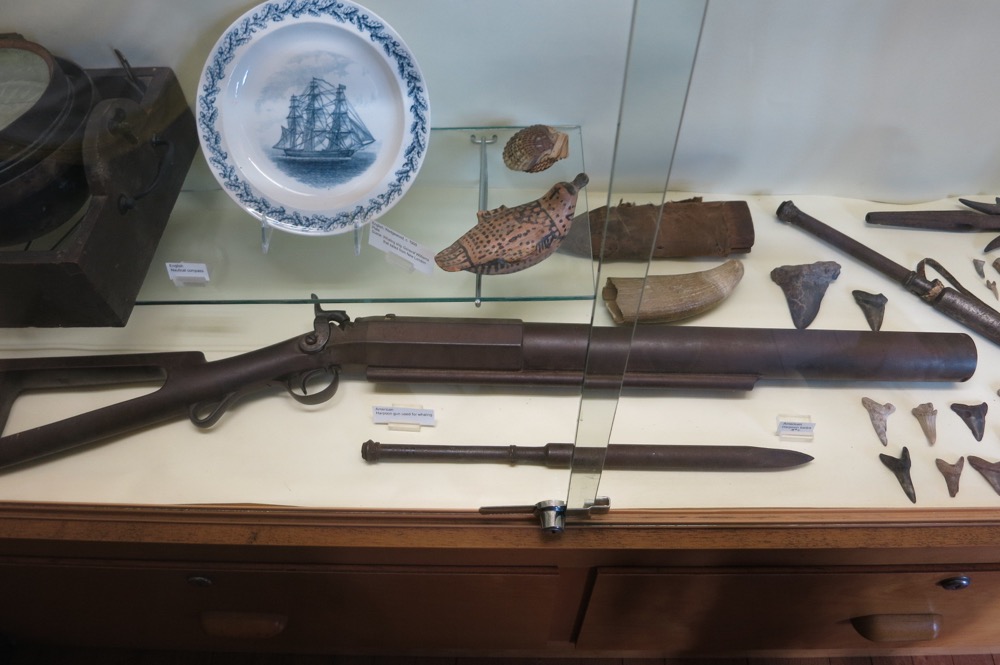 Let’s see, what else? There’s a painting depicting the battle and a model of the Fort as it looked on September 6, 1781. The stained glass here has a nice, slightly apocryphal story attached to it:

The “Attention Universe” stained glass window was dedicated in 1902 to honor Jonathan Brooks. Only 14 at the time of the battle, he was one of the first New London residents to venture out after the burning of the town. Every year he would go to Groton and join in the anniversary commemoration of the battle. One year, with near hurricane conditions, no one came, so he shouted “Attention Universe” and told his story to the wind.

Sometimes I feel like I’m telling the stories of these museums “to the wind,” but like young Jonathan Brooks, I must keep doing it. They’re not all going last forever, so here’s to hoping their stories do. 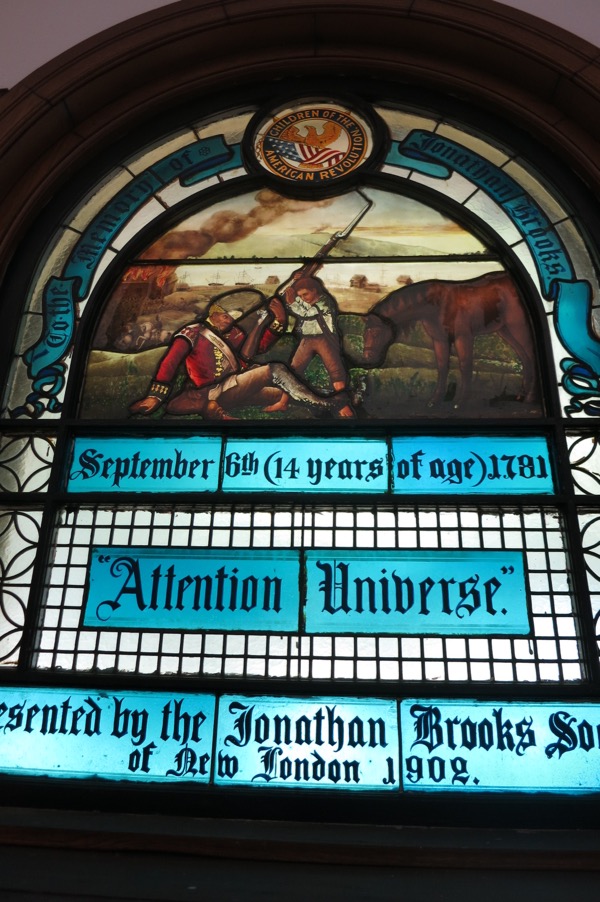 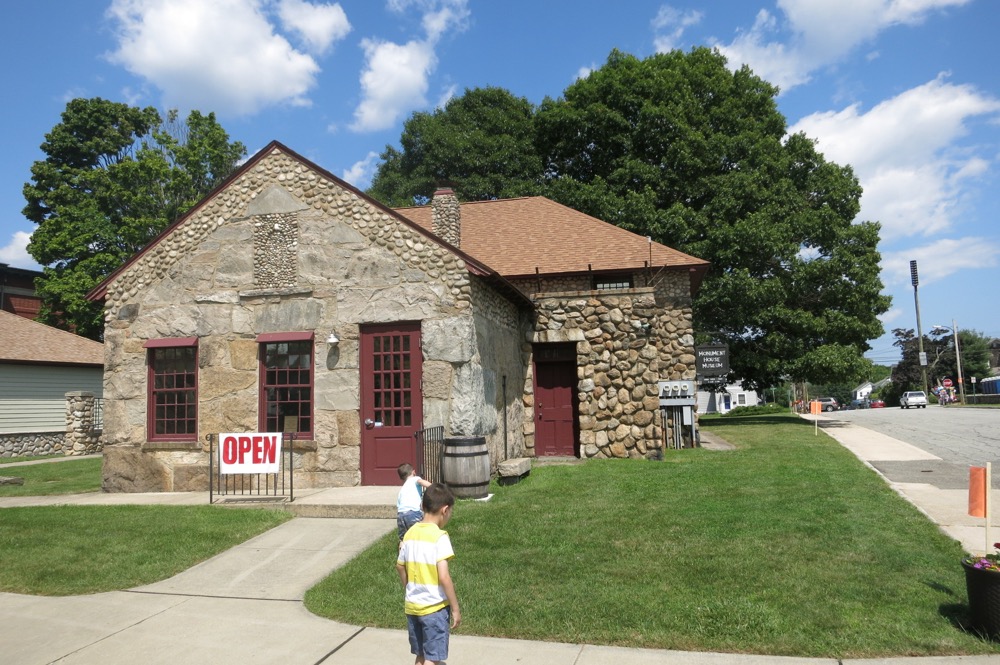