I know I whine about “Mystic” from a geography standpoint too much. I’m sorry. I’m going to do it again because this tiny little building exemplifies the whole Mystic, Old Mystic, Stonington, Groton thing beautifully. 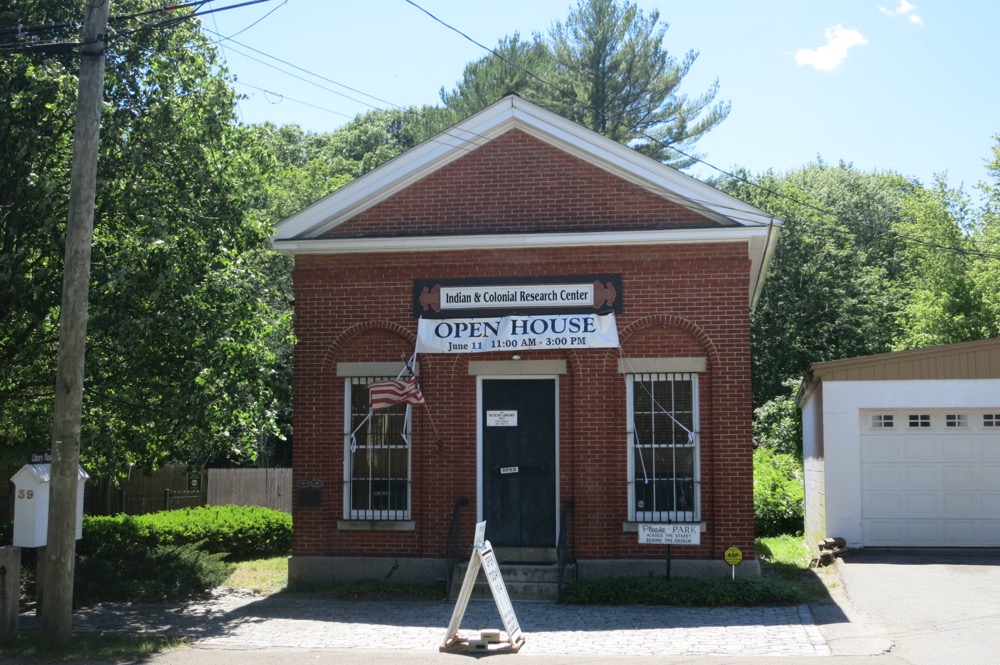 Except it’s not “fine, whatever.” Try finding this joint on your preferred GPS app. What’s the address? “Just check their website,” you say. Okay, let’s do that.

And speaking of getting things right:

For more than thirty years, members of the Indian & Colonial Research Center’s Board of Directors have discussed updating the identity of the Center.

In January 2020, after a two-year deliberative process, the Board made the decision to rebrand the “Indian & Colonial Research Center” with the “Old Mystic History Center” to reflect the growth in our collections. Over the past 50 years, our archival collection has expanded to include many fine manuscripts, publications, photographs, and physical objects connected to the rich and varied history of our area.

Wow. A 30-year discussion followed by two years of deliberation! That’s makes me feel a lot better about all the feet-dragging I do regarding updates and changes to this website. Thanks Old Mystic Indian and Colonial Research History Center! 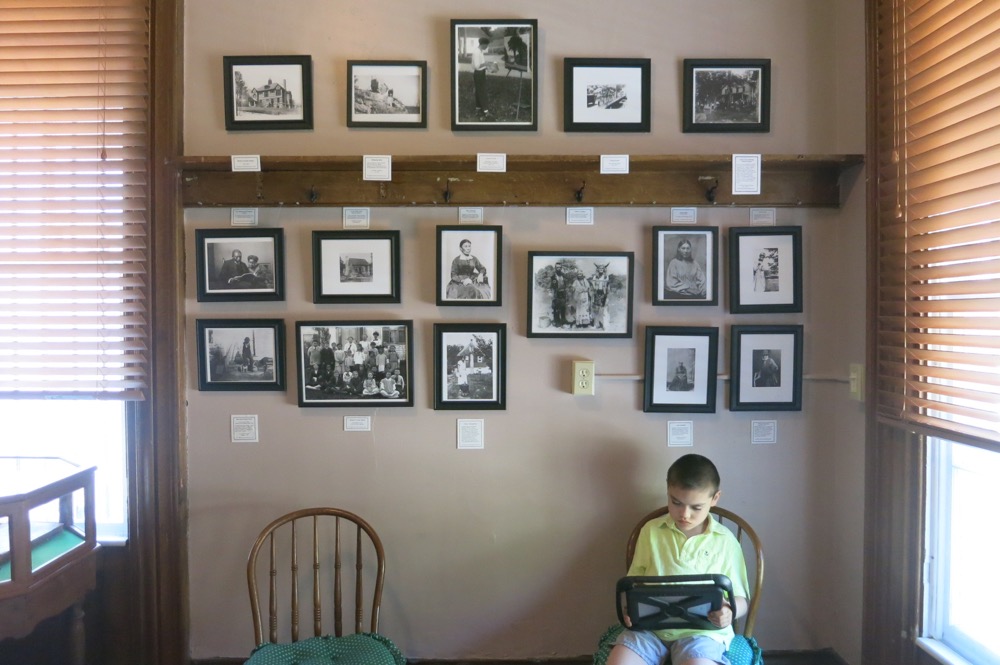 Damian and I visited after a flood seriously damaged the building, although the contents were mostly protected and saved. Those materials are largely indigenous and colonial materials – hence the original name of the organization – but they’ve expanded over the last several decades in an effort to archive and display much more of the area’s local history.

The entire operation can be traced back to a woman named Eva Lutz Butler. It was her research prior to 1965 that wound up being the original Indian and Colonial Research Center. Ms. Butler was a woman who was passionate about history at a time when a woman’s place was NOT leading archaeological digs, conducting anthropological interviews, or writing academic articles.

I won’t pretend that this teeny tiny museum is the most exciting place for non-locals to visit, but it’s these teeny tiny hyper-focused places that can also be fascinating in their own way. For all my years of harping about “Mystic” and what Mystic truly is – and it’s a beautiful place with great cultural attractions, great restaurants, and a cool history – I’ve never really bothered to learn how it came to be a thing. 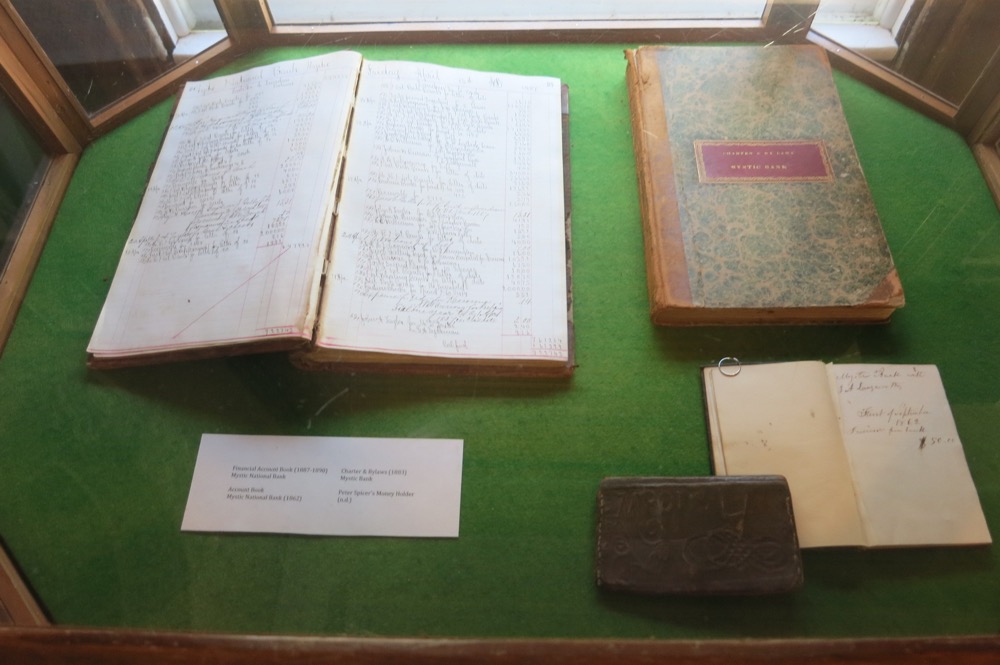 Mystic was originally a “village” located in Pequot Plantation (New London) at the head of the Mystic River. The name Mystic derives from the Pequot term missi-tuk, which means “a large river whose waters are driven into waves by tides or wind”. This village is known as Old Mystic today.

I do not know why the white man had to separate Mystic from Old Mystic, but… keep reading! The following is from the museum’s website:

Before the 17th century, the Pequot people lived in this area of southeastern Connecticut. They were in control of the territory from the Pawcatuck River to the Connecticut River. In May 1637, Massachusetts Bay ordered captains John Underhill and John Mason to lead a mission through Pequot Country. They and their Narragansett and Mohegan allies attacked the Pequot settlement in Mystic in the conflict that came to be known as the Pequot War. On September 21, 1638, Connecticut colonists signed the Treaty of Hartford, officially ending the conflict. Massachusetts Bay Colony was not a party to the Treaty of Hartford. This Treaty allocated Pequot territory to Connecticut’s jurisdiction and opened the land between the Mystic and Pawcatuck Rivers for settlement.

Okay, that was a bit… iffy. All true, but it glosses over John Mason’s genocide. It’s always bothered me that history always notes that he was aided by other indigenous peoples; almost as a hedge. “Oh look! If the Pequot War was so terrible, why did the Mohegan’s help?” I’m guessing it wasn’t quite so cut and dried. 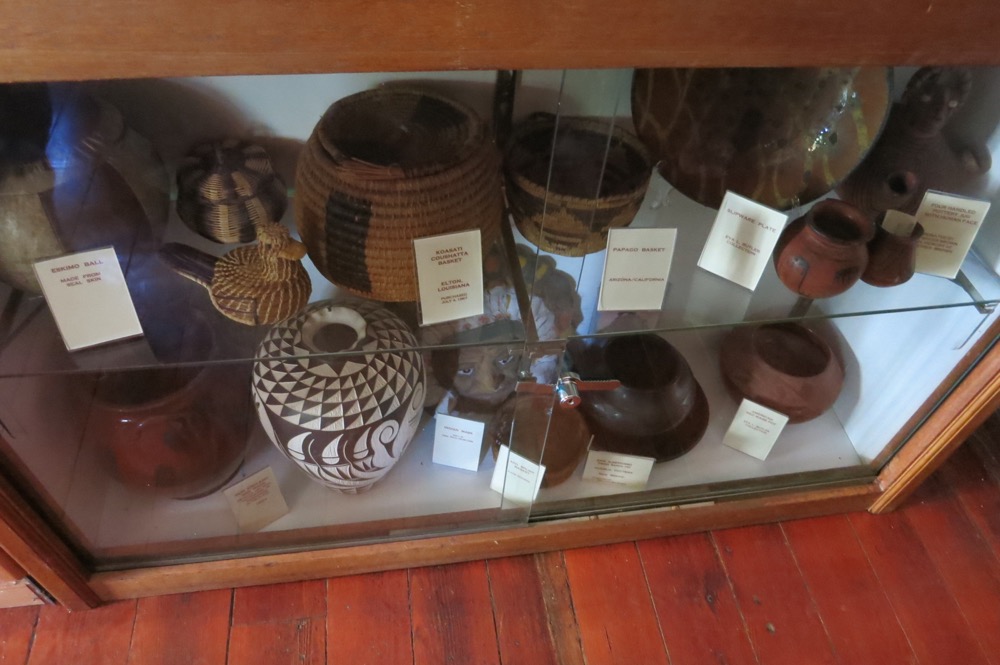 Anyway, colonialists moved in and built up a settlement. Connecticut refused to recognize Mistick as a town, so the settlers petitioned Massachusetts, as the area was kind of in both loosely defined colonies at the time (1658). Massachusetts agreed and brought the town under its jurisdiction as Southerton. It remained part of Massachusetts until 1662, when King Charles II gave John Winthrop, Jr, a charter, fixing the eastern boundary of Colony at the Pawcatuck River. At that time, the town of Southerton was returned to Connecticut, renamed Mistick in 1665, and then changed to Stonington a year later, with the village of Mystic remaining at the headwaters of the Mystic River.

I’m ignoring the contents of the History Center and the exhibit that I saw when I visited, because after 16 years of writing CTMQ, I finally have the answer to one of the most vexing questions I’ve had about Connecticut. Thank you Old Mystic History Center!

(I’m not going to block quote this because it’s long, but this is all from their website):

By 1705 the population east of the Thames River had increased sufficiently for the General Court to allow the inhabitants there to incorporate as a separate town, which they named Groton in honor of the Winthrop estate in England. This decision meant that the part of the village of Mystic that was west of the Mystic River ended up in the town of Groton and the part of Mystic on the east side of the Mystic River was now part of Stonington. 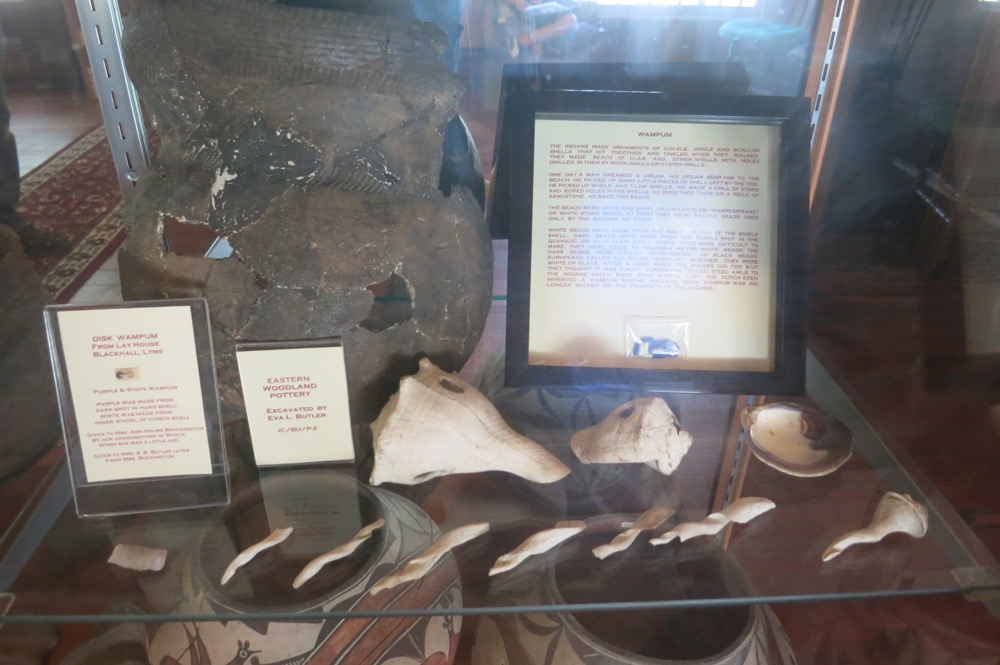 By the first decade of the 18th century, three villages had begun to develop along the Mystic River. The largest village was called Mystic (now Old Mystic) and was also known as the Head of the River because it lay where several creeks met in the Mystic River estuary. Two villages lay farther down the river. The village on the east side of the river was called Stonington. On the west bank of the river in the town of Groton stood the village of Portersville.

When the first Mystic Bridge was installed in 1819, the west side of the river near the bridge (several miles south of Old Mystic) was still called Portersville. The east side of the river then became known as Mystic Bridge. The first drawbridge was built in 1835; this drawbridge was opened and closed by oxen. Shortly thereafter, ca. 1850, Portersville became known as Mystic River. 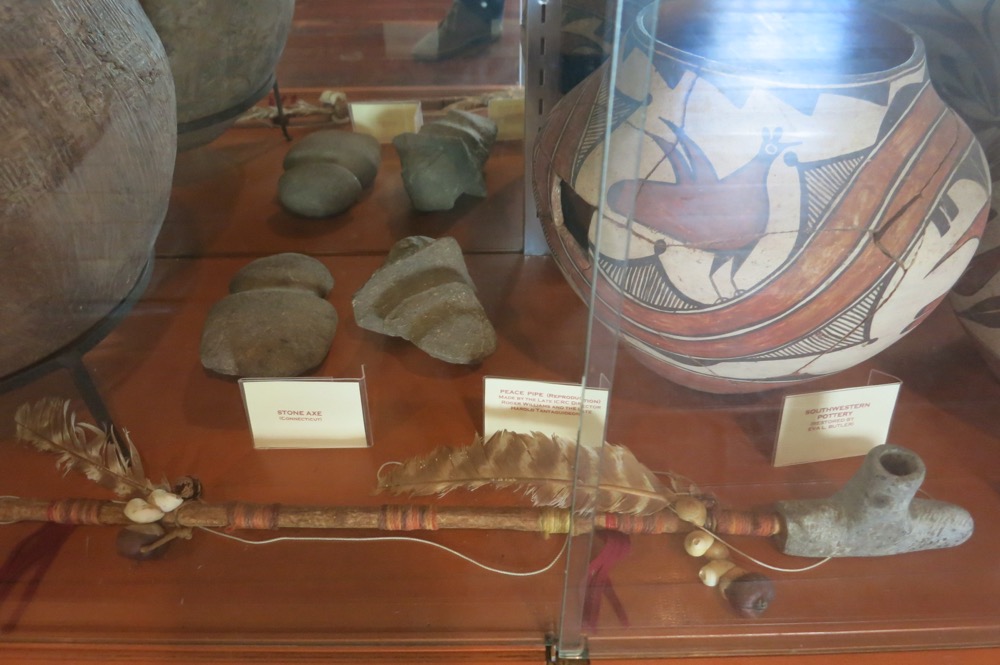 Mystic River and Mystic Bridge continued as they were until about 1890 when the village of Mystic became known as Old Mystic. At this point, without merging, they gave up their independent names and became known as Mystic. These changes were caused by the requirements of the US Post Office system, which has ever since treated the villages on the two sides of the river, belonging to two different townships, as a single entity for Post Office purposes with the ZIP code 06355.

Since the original bridge was constructed in 1819, it has been replaced by newer and more technically advanced models several times, always in the same location. The current bascule bridge was installed in 1922.

Along the river during the 19th century, numerous shipyards sprang up between Mystic and Old Mystic, with merchant ships and whalers coming off the ways on a regular basis and Mystic sailors venturing worldwide. The Mystic Seaport Museum today occupies the site of one of these very shipyards. 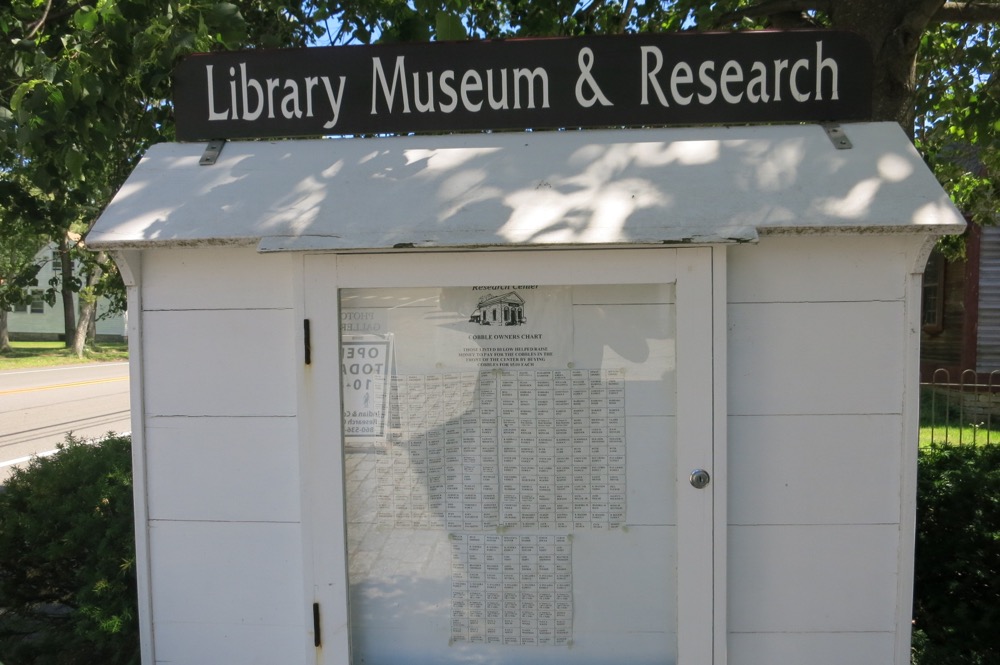 Phew. And… what? All that does is tell me that I’ve been right all along and Connecticut’s town and village conventions ARE as dumb as I’d always held!

Regardless, the museum and library is in the historic 1856 Mystic Bank building and it’s all very charming. They hold Eva Butler’s entire collection and all the stuff you’d expect: old photos, maps, property records, genealogical records, probate records, births and deaths, old diaries and postcards, etc.

I’m glad we visited if only because it led me to solve the mystical Mystic mystery. Thanks Eva Butler and local preservationists! 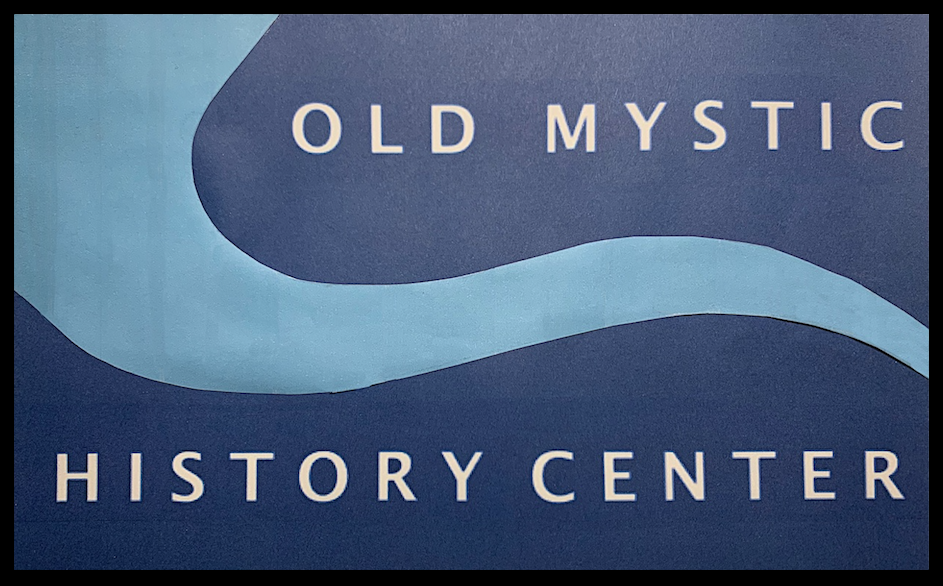