*The title implies that this section completed the Shenipsit. That later became inaccurate, for as you’ll read, the northern end was extended.

This just didn’t seem right. A hike on the Shenipsit – my final one – with good weather! While I did have some nice days for a few of the regional Shenipsit trails, I think I had cloud cover and/or rain and/or snow on my four prior mainline Shenipsit hikes. Another good thing: I was joined again by Dennis, who had enlivened a previous (Section 3) Shenipsit hike a little further south. Nothing could go wrong! 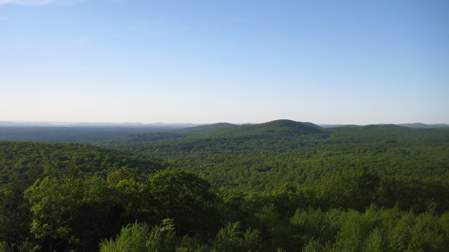 Except, perhaps, my old nemesis – Google Maps and the continued inability to differentiate crappy forest roads versus paved roads. Dennis and I agreed to meet at the northern terminus of the Shenipsit on Old County Road up in Stafford. (What an odd name for a road though, as Connecticut’s counties are nothing more than cute lines on a map.) Anyway, it’s right off of Route 190 and after a few hundred yards becomes rather a non-road with several signs warning the idiots like us that we probably don’t want to drive any further.

So I didn’t, remembering Dennis’s concern about his car’s ability to navigate such roads from a previous hike. I tried to go around and approach the meeting point from the east. That didn’t quite work so well as I ended up in the middle of the woods in a maze of forest roads. So I decided to go back around the original way and hopefully find Dennis in the woods. 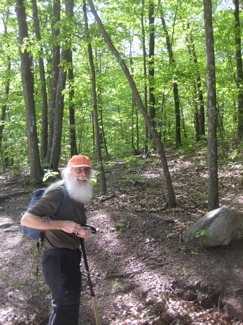 I did! He was rarin’ to go and his car was apparently well. We drove south to where I’d left off last time along Hopkins Road in Ellington. This is another dirt road, but one my son could ride his tricycle on. I really wish Google Maps, as indispensable as it is, would note these things. Anyway, I’m here to write about the trail, not the roads to get there. 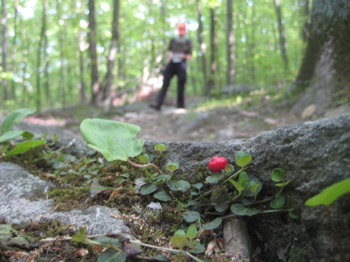 First, this is the best section of the Shenipsit. It’s as remote as the trail gets and doesn’t intrude on anyone’s backyard barbecue. It’s almost entirely within the Shenipsit State Forest and summits arguably the best hill in the state east of the Connecticut River. Actually, that’s not even arguable. Soapstone Mountain is just really cool. I’m bummed that I didn’t snap a picture of the summit and its tower from the aforementioned Old County Road. I’m pretty sure not too many people drive or walk that stretch with a camera on clear days and it was a unique vantage point. Oh well. 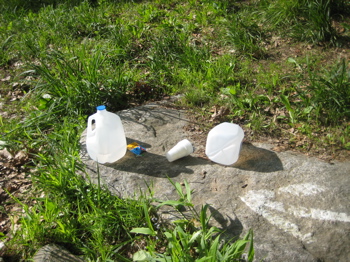 The first couple miles are pretty flat and follow an old tote road for the most part. Prior to our hike in the morning and early afternoon, the Soapstone Striders hosted their annual trail run here. I was a little concerned that if it was raining that the runners would tear up the trail, but alas, that was not an issue. In fact, the only evidence of the run we saw was one uncollected water station.

That, and their weird blazing convention on the trees – 2 foot high white dots marking the running path, which stuck mostly to the Shenipsit. Other than enjoying the solitude of the woods, there’s not too much going on in these first few miles. 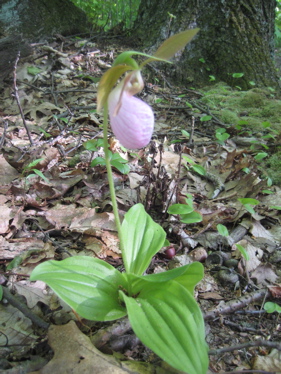 The trail crosses several forest roads, but is well-blazed throughout. Dennis and I were making such good time that he refused to believe we were as far along as I suggested. I think we had an unintentional hop in our step because we knew we’d be fighting dusk later on.

Before we knew it, we’d knocked out the first 4.5 miles and were nearing what is essentially the one lone climb of the day: Soapstone Mountain. As the Shenipsit crossed paths with other trails at the base of the peak, we stopped to read some of the interpretive signage along the way. Nothing new here (for me), but they are always a welcome sight to take a fake rest before or after a climb. 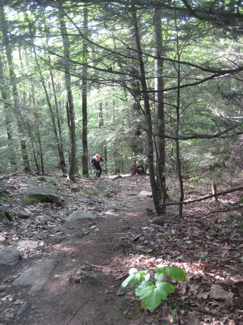 That is, “Oh look, let’s learn about charcoal burning hearths!” which really means, “I’ll just stand here pretending to read this sign about something I don’t care about for 3 minutes before moving on.” I’m not saying Dennis or I ever employ such nefarious methods, but I’ve seen it done. And you know who you are.

The climb is as short as it is steep. (There is a bypass trail, but really, why in the world would you hike this section if you plan on skipping the best part. Which also happens to arguably be the best part of the whole Shenipsit?) I bounded up the trail, eager to see the views on top. We passed a group of felonious looking high school kids who were just smoking and sitting in the middle of the trail. 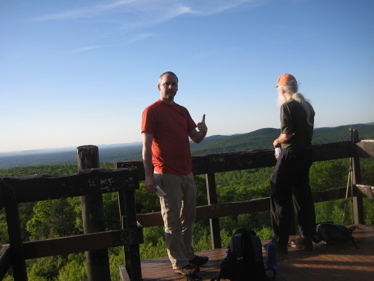 I thought about using the situation as an opportunity to share some thoughts in the hopes that one or two of these kids would turn their lives around. “Hey guys! Did you read the sign down there about the charcoal burning platforms?” Or, “What’s up dudes! Just chillin? Cool! The guy chugging up the hill behind me is a prominent member of the Connecticut Valley Atheists. Would you care to take some literature from him and think about attending one of the meetings?”

I always enjoy the thought of atheist proselytizing.

Of course I merely said hello and continue on up the trail. There is a sturdy lookout tower on top of the 1,075 foot mountain that was built in the 70’s to replace an old wooden fire tower. It’s rare to find these things open to the public and is the only public observation tower in eastern Connecticut. If you’re lazy and just want to check out the view, you can actually drive all the way to the summit from the eastern side and walk 100 flat yards to the tower. The view is spectacular. 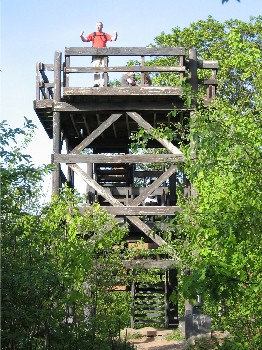 Unfortunately, the tower closed in 2013 or so and remained so into 2018… I took my boys up in in 2015, but since then, the state removed the bottom flight of stairs probably because of my post… I’m sure. There is now a new – and climbable – tower in 2019.

The wide panorama from south to west to north takes in a good chunk of northern Connecticut and southern Massachusetts. Dennis and I had fun naming the mountains we thought we saw, from the easily identifiable Mt. Tom to the potentially misidentified Greylock, Bear, Everett and Race. I really do think we were able to see Greylock though Dennis politely disagreed. (You can’t see any of this stuff in my pictures, of course.)

We hung around on top for a good 5 or 10 minutes; just long enough for the miscreants to join us and decide that climbing up the outside framework would be a good idea. I suggested we get going before having to deal with one of these idiots’ paralysis, so we gobbled up our snacks and headed north. On our way down, I overheard the following boast from the kid who (very impressively) climbed up the tower in under a minute: “[Expletive!] How do you think I run away from the cops all the time? I got mad skills and just run into the woods and climb up a tree!”

Um. Yeah. Really? Because trapping yourself in a tree is the smartest way to escape a cop? Genius. 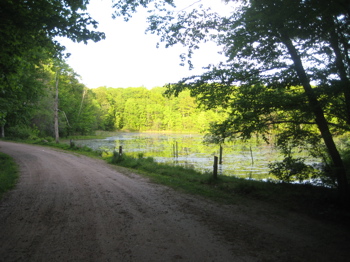 After the steep descent, we came up the green-blazed Forest Interpretation Trail again. This one-mile loop features nine interpretive signs that give lessons in the forest’s history and ecology. And lo! I read a sign about something I’d never read about on my hikes before! Clubmosses! I rather enjoy clubmosses. They are really cool; their fossil records date back to over 300 million years. They produce spores which have been used for many things, such as microscopic measurements, soothing powders and coatings for pills. Okay, that’s not too exciting, but check this out Mr. Anti-Clubmoss: The spores have a capability of producing a flash explosion when ignited.

The old name of the club moss is vegetable sulfur; this is a direct reference to the highly flammable oil contained in the powder formed by the abundant yellow spores of the running club moss. In older times, this flammable powder from the club moss was often made use of by stage designers to create stage lightning for their plays; the spore also formed the basis of the flash powder in the earliest days of photography. 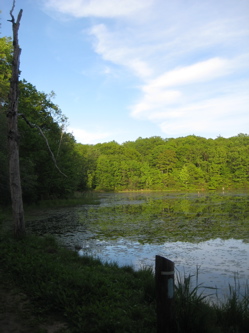 You see? If those ruffians were less concerned about posturing and smoking menthols, they could learn that smoking clubmosses and tossing them at cops is a far better method of escape. Just waiting for Michael Westen on “Burn Notice” to employ this technique.

We were now in the homestretch of the Shenipsit. It was apt that the sun was noticeably setting as we made our way onto Sodom Road – yeah, that’s right, Sodom Road – along a nice quiet pond and back into the quiet woods. While there was a recent trail relocation around a hill rather than over it (which on the map makes sense as now the trail stays in on State Forest land), it’s nothing too troubling at all. 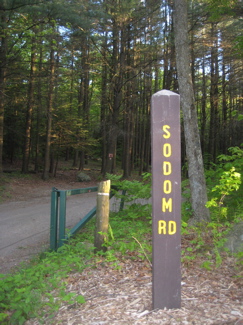 Another short stint on Sodom Road – yeah that’s right, Sodom Road – and then the crossing of Route 190. Note: The CFPA Walk Book Map is a bit off here, as there is another road in reality and the trail never enters the woods again before crossing 190. Minor point.

Both Dennis and I enjoyed the rather old timey looking snowmobile sign at the entrance of Sodom Road – yeah… – and remarked that we’d never seen that sign anywhere in the state before. 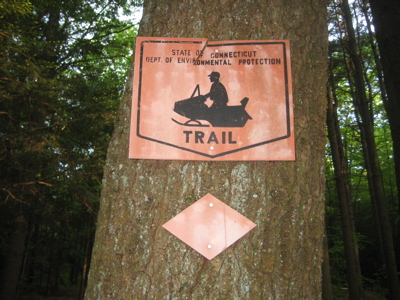 We walked along Galbraith Road a bit before turning off it and into the woods one final time. Rumor has it that the Shenipsit used to continue on past Old County Road up towards the Massachusetts line, a few miles north. Looking at the map, this seems very feasible to me – even today. The Shenipsit Forest continues on north a little ways and then it’s just forest and dirt roads for several miles more. 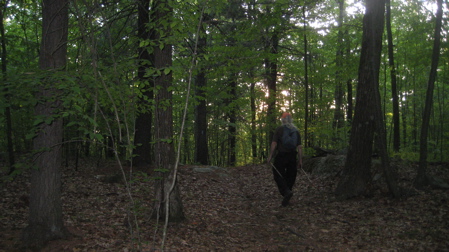 Oh well. As it is, Dennis got a nice shot of me finishing another of Connecticut’s 50+ miles trails (more including the regional Shenipsit Trails) and we gingerly picked our way out the rocky road in his tough old car. 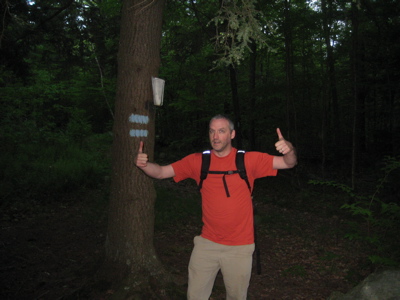 2015 Update: The Shenipsit has been officially extended northwest up to Greaves Road now. I still tend to think there may be plans to keep it going up to the MA line, but I’m just guessing.

I really enjoyed this section and was treated to a beautiful sunset in Vernon on my way home. Even better, when I called Hoang to tell her I was fine but would be a little later than planned, all she had to say was that the Flyers were winning 6-0 over Montreal in the playoffs. 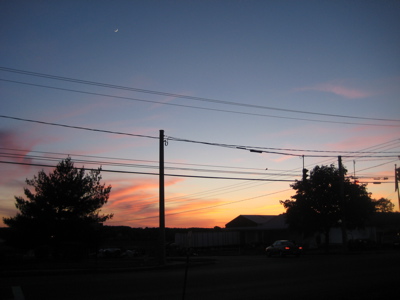 Continue on to Section 6: No, THIS is ShenipThat’sIt!