Stop me if you’ve heard this one before: “the Stevenson Dam is one of only two dams in the country that has a public road over the top.”

Wait. That’s ridiculous, even if I’ve seen it in print. The actual claim is more specific: “the Stevenson Dam is one of only two concrete dams in the country that has a public roadway bridge across the top.” Something like that. It’s not true, but apparently this second claim has morphed into the first claim through sheer verbal laziness. 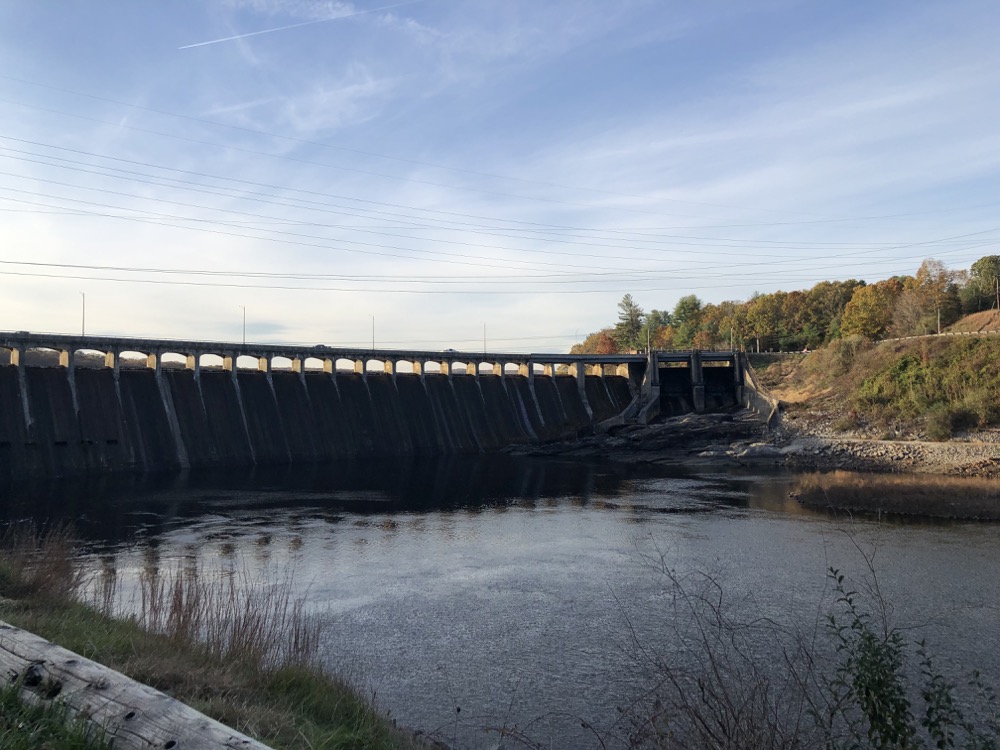 The first claim would mean that Connecticut is pretty special since we have that situation at the Saville Dam in Barkhamsted. But the second claim is more interesting, as pure concrete dams are more rare than you’d think and Route 34 is set on 24 concrete arches above the dam.

The dam and hydroelectric plant was completed in 1919 and was quite unique at the time. The bridge and road above the dam was purposely integral to its structural integrity… which is probably why the awful thing still exists as it does today. (Actually, as I understand it, in the years since it was built several strengthening projects have made the dam much stronger and has nothing to do with the road and arches.)

The Stevenson Dam Bridge, which is owned and maintained by the state DOT, is regarded as a dangerous antique by traffic engineers. (The Dam and plant are First Light properties, which adds to the feet dragging on fixes.) 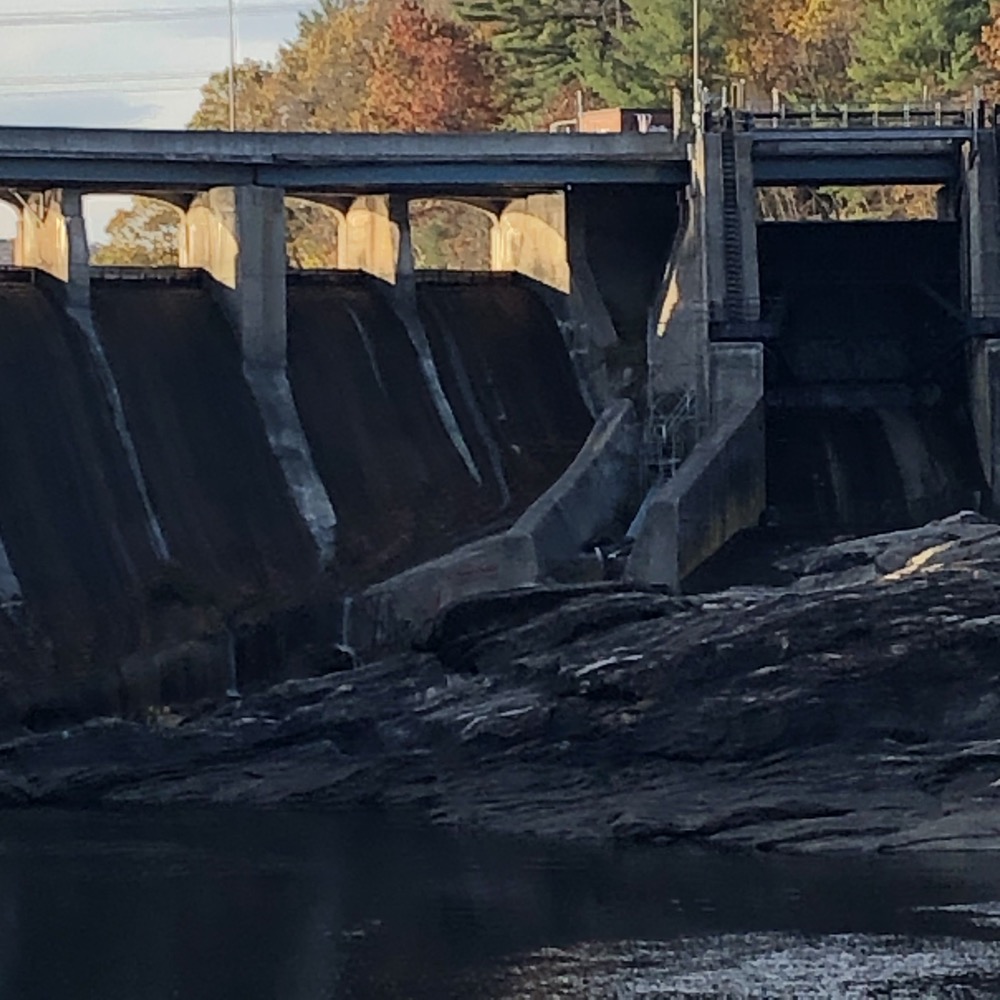 There are sharp corners at both the Monroe and Oxford approaches, and the deck offers no room for bicycles or pedestrians. Two tractor-trailers, passing in opposite directions, can barely get by. When I pulled off and into a recreation-area parking lot, getting back on the road at the “Monroe Corner” was literally impossible without someone stopping traffic for me. This whole thing is a mess.

(Fortunately, almost nobody works at the hydroelectric plant; it’s all run by automation now from the Rocky River pumping storage station in New Milford.)

There has been talk about building a stand-alone bridge to replace the current bridge, but these discussions have been going on for the past two or three decades with little to show for it. 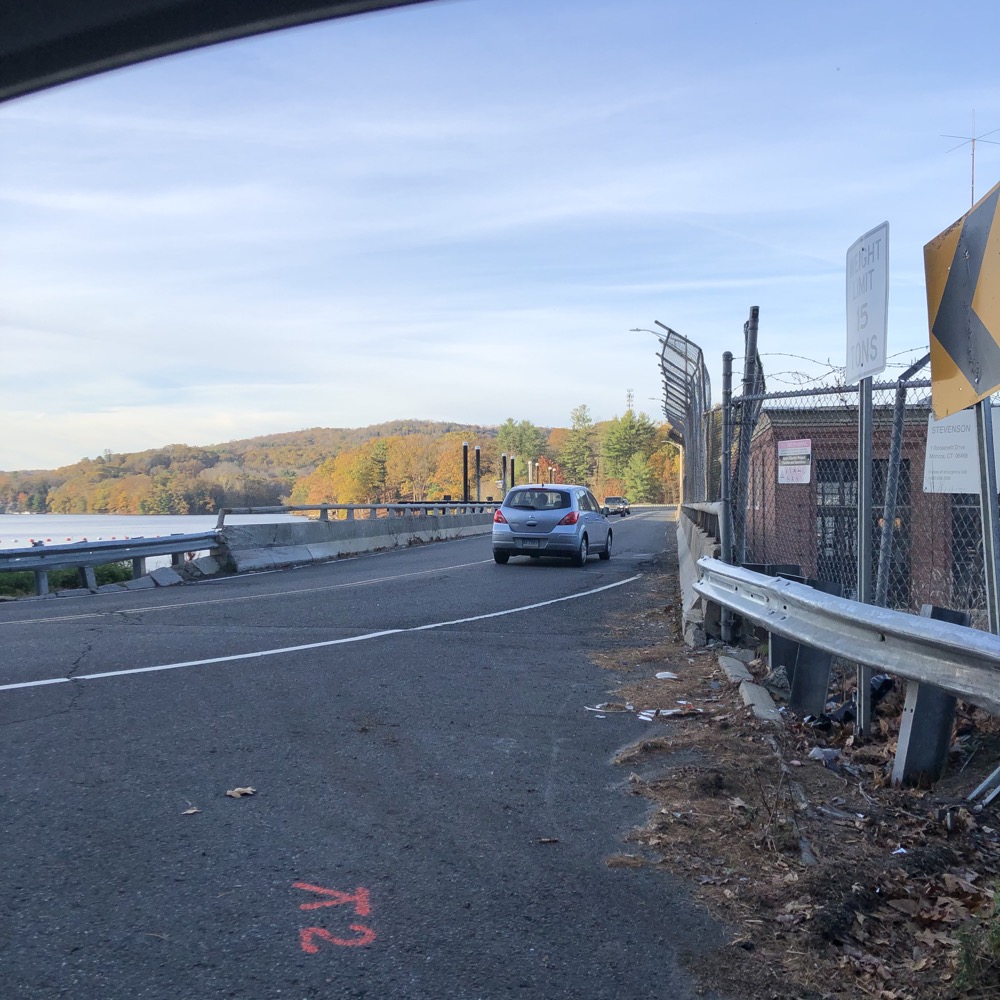 First Light has grown tired of the century of traffic on top of their dam. The bridge underwent extensive rehabilitative work in 1957, 1977, 1979, 1987 and 2005. The bridge deck has been repaved and patched countless times since the 1920s.

But the geology that made the dam possible – the rock gorge – is what limits it from any many changes. (There’s also the issue of half a century of General Electric’s dumping of PCBs in the Housatonic up in Massachusetts and the fear of stirring them up again.)

For what it’s worth, I think this whole thing is pretty cool. I would guess only a small percentage of drivers know they are driving a 24-arch bridge over the dam. I didn’t – I had originally listed the dam as something to include on this website because there was an eel ladder here and for some reason that I honesty can’t defend, I once spent time listing all the active fish ladders in the state. 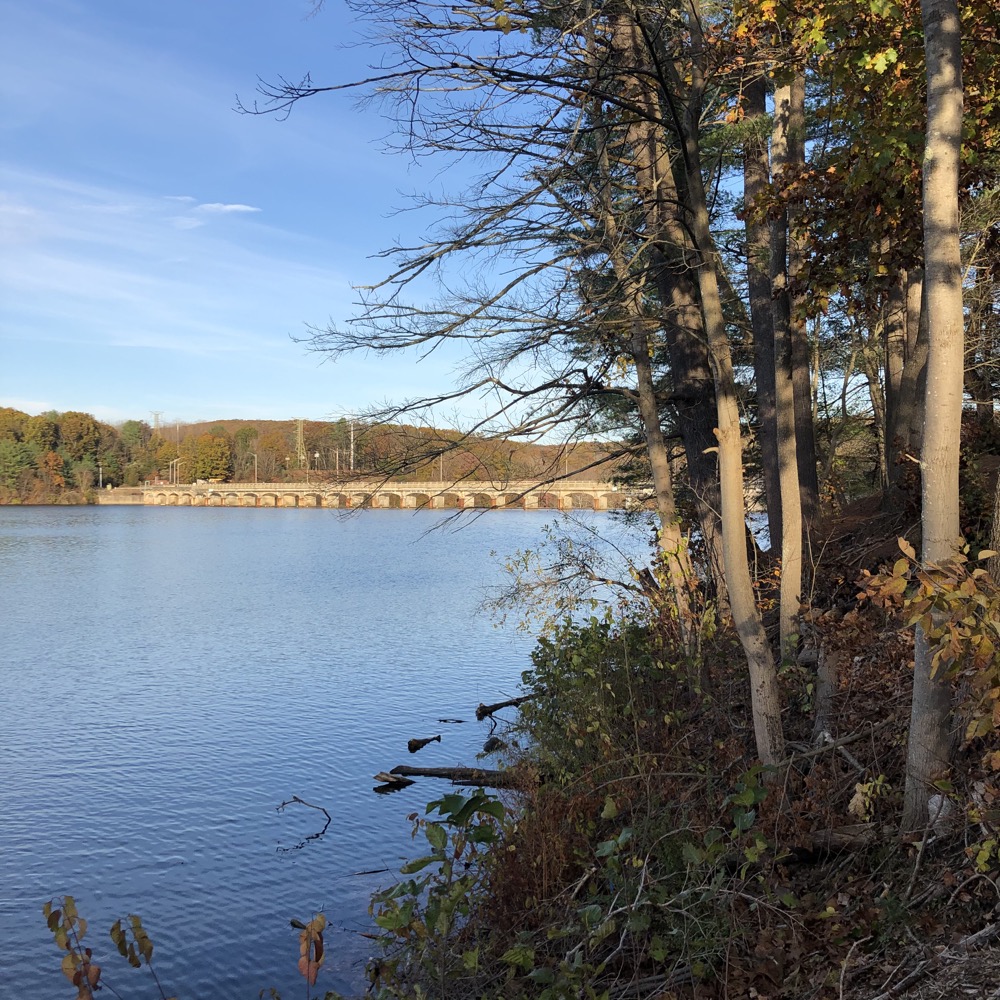 However, I’m not sure the eel pass exists here anymore. It was installed to test whether or not the eels would use it and I don’t think they did. I cannot find corroboration one way or the other. Sorry eel ladder fans.

At least the swimmers in Lake Zoar – the dammed portion of the Housatonic River here that is used for recreation now – won’t get tangled up in eels I guess.

(Zoar, of course, was a settlement back in the 19th century that was buried by the damming of the river. If the name Zoar sounds familiar to you, perhaps you’re thinking about the Zoar Trail upriver in Newtown.) 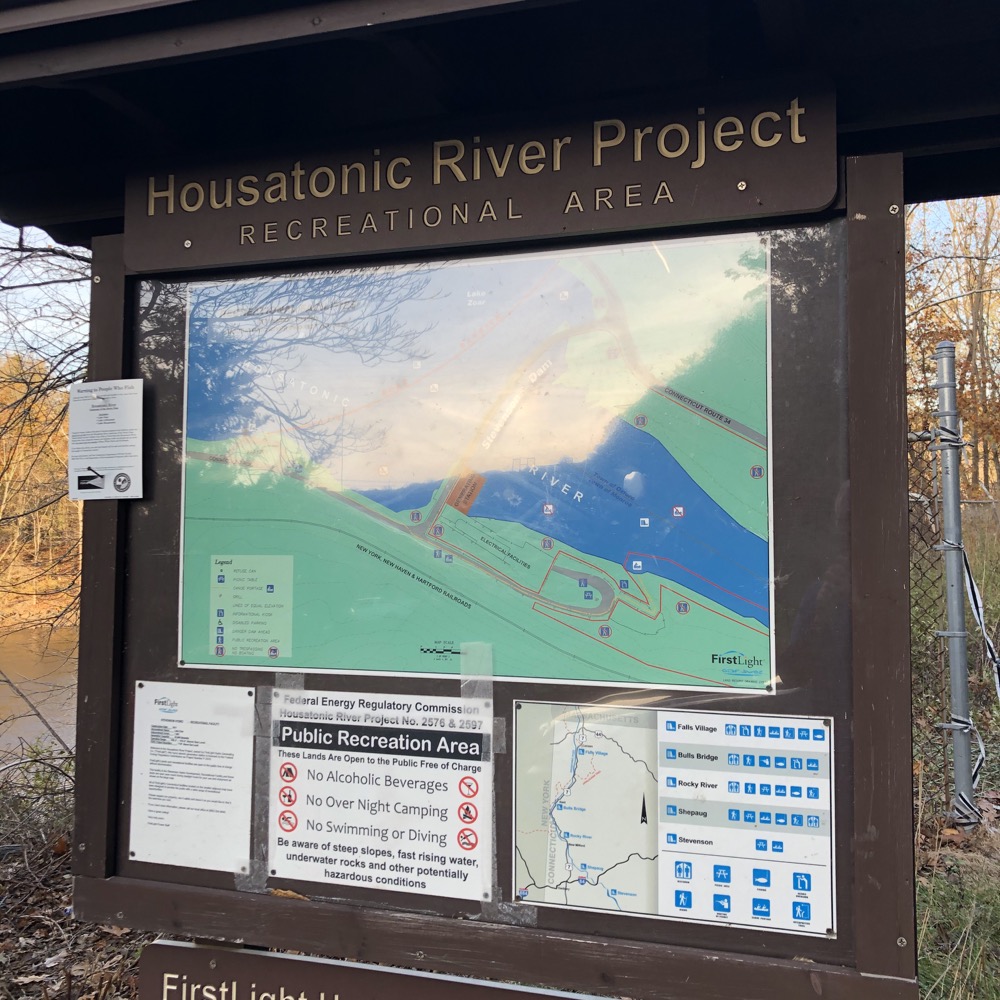 Or, more likely, you’re probably familiar with Lake Zoar Drive-In which has been on the Monroe side of the dam since the 1920’s.

I don’t know what will happen here. Any new bridge will be incredibly expensive and will involve some pretty serious engineering challenges to overcome. Of course it’s possible, but I’m not sure we’ll see it in my lifetime.

So for now, next time you drive Route 34 across the Stevenson Dam, take a moment to recognize the history and uniqueness of the experience. Or not. 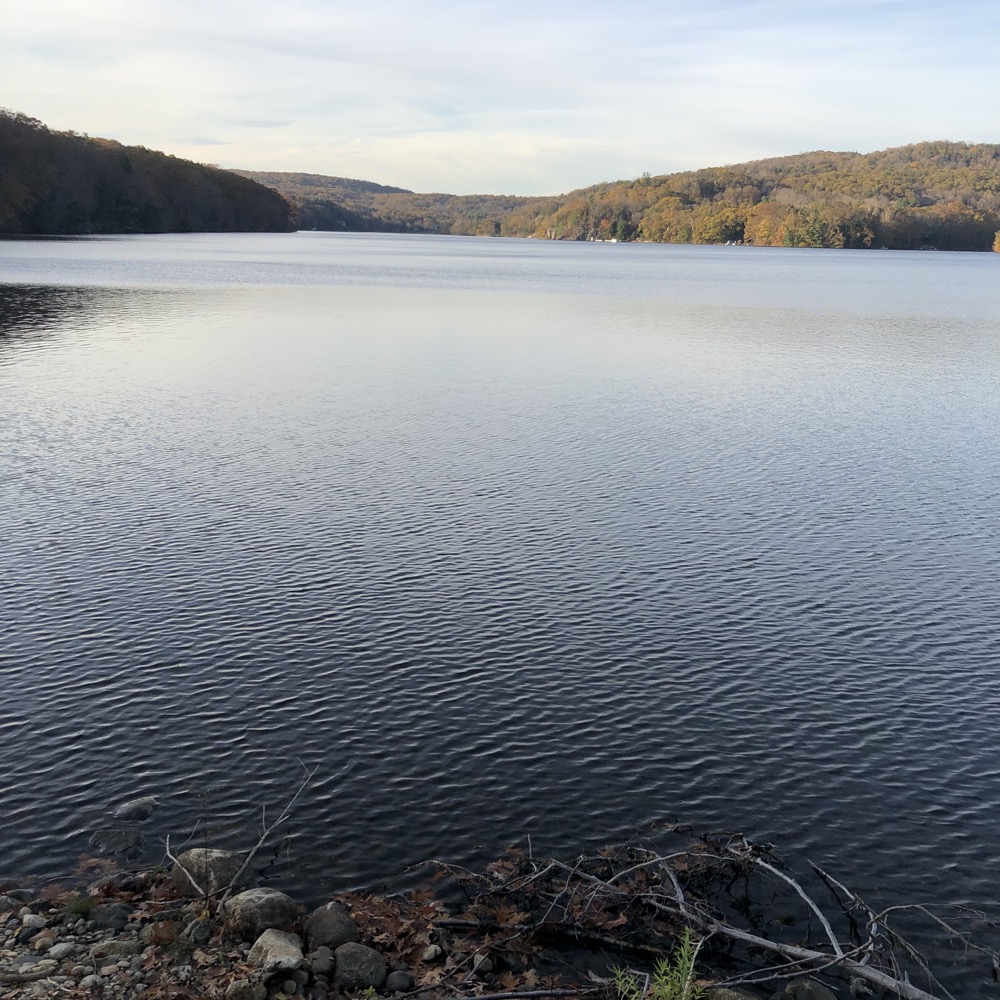