Waypoint opened in 2015 and then ceased operations in October 2019. The brand and distillery were purchased by a new group in late 2019, posted “opening soon” on their Facebook page in early 2020, kept the thing alive during the pandemic, completely redid the space, and opened up again in July 2021.

Did you know this is the very first post I’ve written about a distillery in Connecticut? Of course you didn’t – how could you? That would be weird and way too stalkerish. But it actually surprised me a little bit. 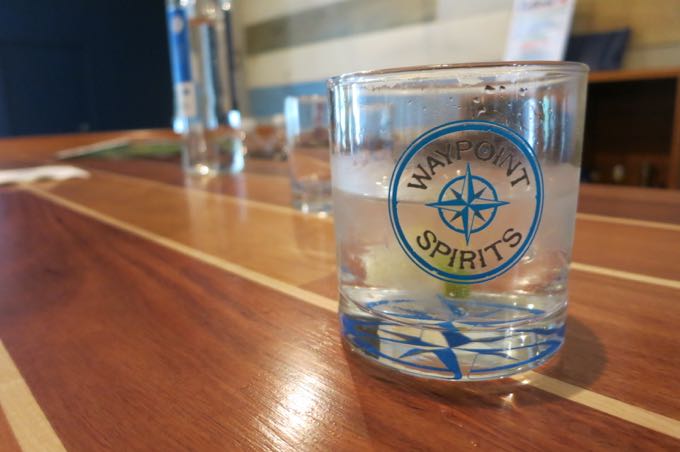 Connecticut’s “craft distillery” movement is still in its infancy in 2016. But contrast the 10-15 distilleries/distillery-like places (depending on how you count) in the state now to the two or three of a few years ago, and you can see where this thing is going.

Will our state have as many distilleries as we have wineries and breweries in a few years? No way, but we’ll have a lot more.

Waypoint opened in a nondescript industrial building in Bloomfield in 2015. I had been hearing about them from a friend for a while. The word was that the facility was going to be really nice and the equipment they were bringing in was top of the line.

Trusting this intel, I was excited to check the joint out. 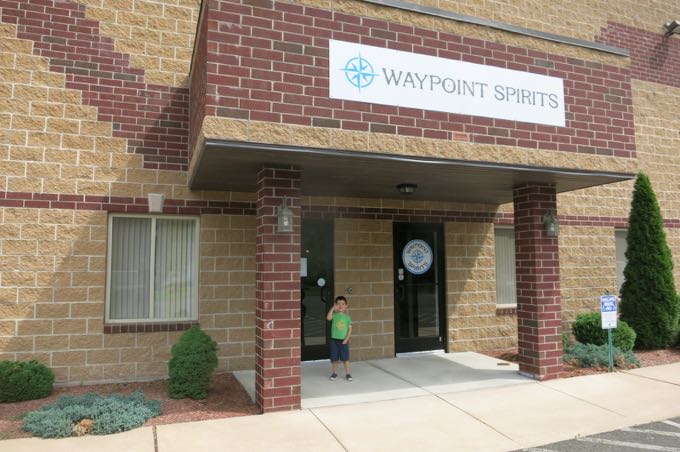 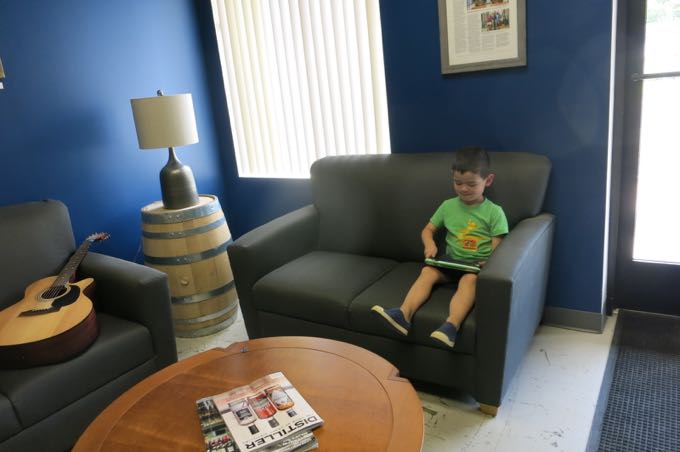 So that’s exactly what I did one summer Saturday. I had both boys with me, which of course is pretty dopey when visiting a distillery. But fortunately, no one else was there AND there were nice couches AND the Waypoint (former) co-owner there that day, Doug, was super cool with my boys. Doug and I bonded quickly and he was eager to walk me through the Waypoint World.

For whatever reason, both Calvin and Damian were sort of fascinated by the distilling process. Doug walked us through the distillery, explaining the processes and equipment and stuff, but quickly changed his tact to focus on the bubbling apparatuses and digital read outs; the things my children were enamored by. 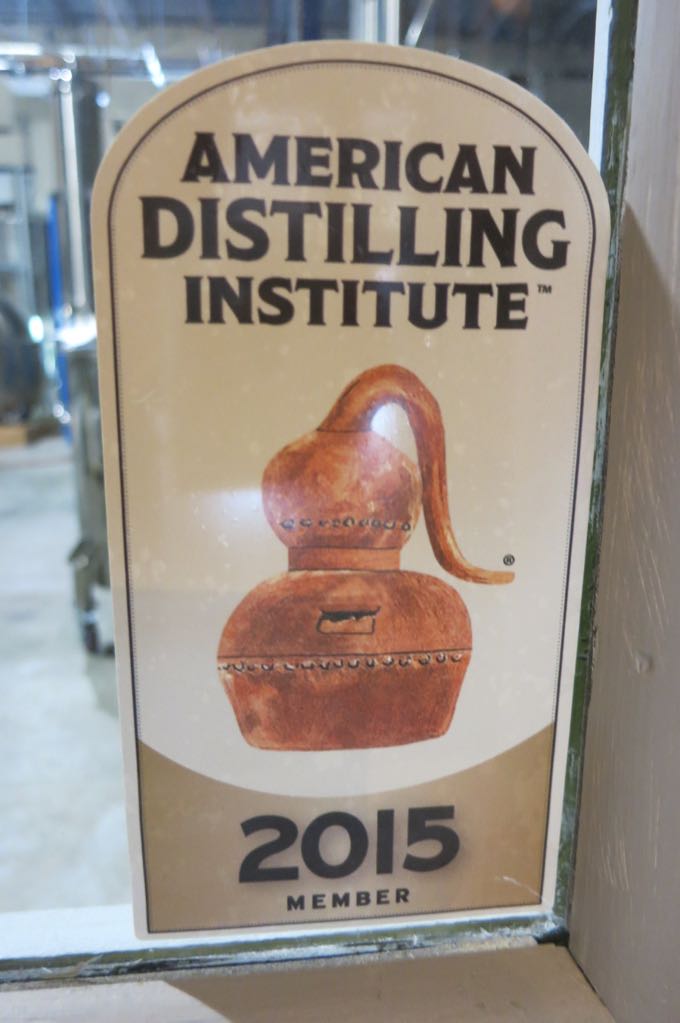 Hm. What did the American Distilling Institute picture remind me of…. 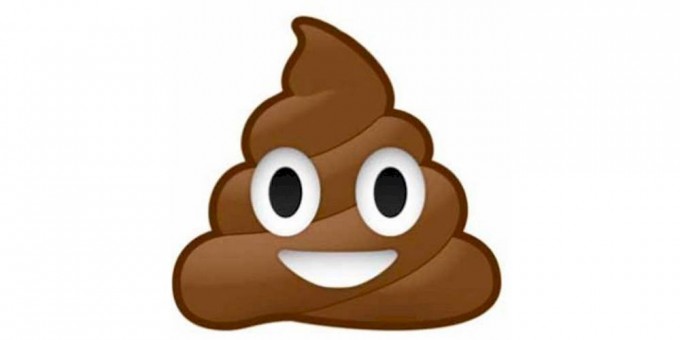 I pretended to be fully knowledgeable of the distilling process, which I think made Doug feel better. (Frankly, the details of distilling, winemaking, and brewing all kind of bore me.)

The space in Bloomfield is sparking clean – and large. Waypoint has lots of room to grow, should the market allow it. They even have a sort of stage and gathering space for fundraisers and parties and such. I’d imagine a party in a distillery could be quite the thing.

Doug and I chatted about our “real lives,” both working in weird arms of insurance at the time. (I still do, but I’m not sure about Doug as I believe I read that his company was bought after our visit. You see, in MY weird arm of the insurance industry, I’m paid to know about these obscure things.)

At the time of my visit, only their Labrador Noon Vodka was proofed and bottled. I was given a vodka tonic to enjoy. Unfortunately, I do not enjoy vodka tonics. But I drank it, thanked Doug and frankly, it was fine. To me, vodka is just vodka. 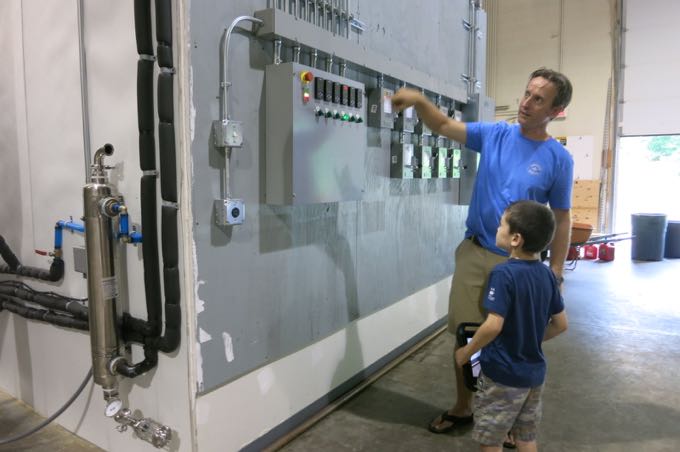 Gin, however, is not just gin.

I like gin. In fact, it’s the only hard liquor I ever drink – and rarely at that. There is a lot of disparity between what I consider “good gin” and “not good gin.” Doug offered me a wisp of a taste of what he called, I think, “unproofed gin.” It had a brackish appearance and smelled like the most junipery juniper you’ve ever junipered.

Doug laughed and allowed me to taste the tiniest amount. Man, whatever this stuff was, and wherever it was in the process, it was like SUPER GIN. Holy crap. It was made VERY clear to me that this was in no way indicative of what the company’s finished Wintonbury Gin would be like. 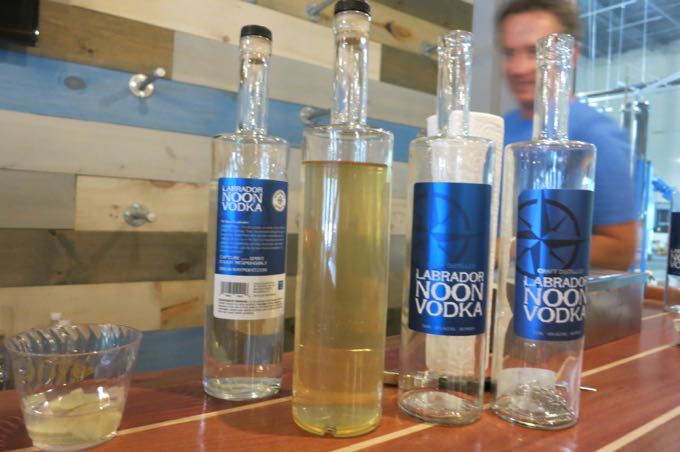 That’s the unfinished gin there 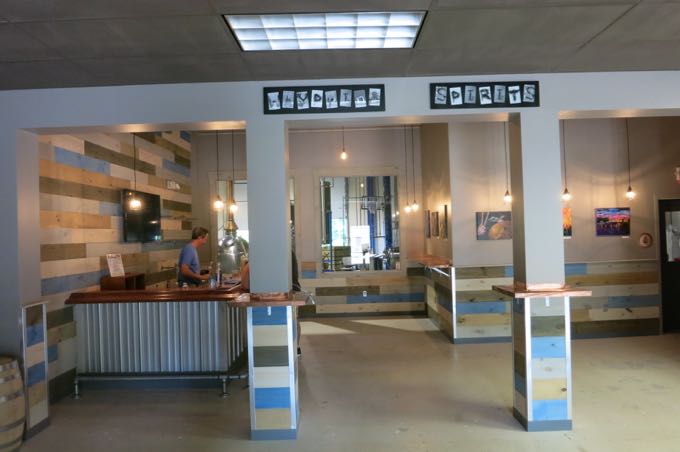 This is the old space which I now realize wasn’t bad at all. The new space below kept a lot of the old elements.

I very much enjoyed my visit and meeting Doug and he was great with my kids. I enjoyed the atmosphere and see lots of potential for this place in Bloomfield. The bottom line is that now you can have a boozy Saturday in Bloomfield: Hooker Brewing, Back East Brewing, and Waypoint Spirits.

You can still have that boozy Saturday at Hooker and Back East by the way. And as of July 2021, you can add Waypoint back on your itinerary. And it is definitely and all new Waypoint. Holy cow is it.

Granted, I never visited the distillery since those tentative 2015 visits. I know that in the years between then and my 2021 visit, the old owners did create a bit of a “space” and people did hang out there. 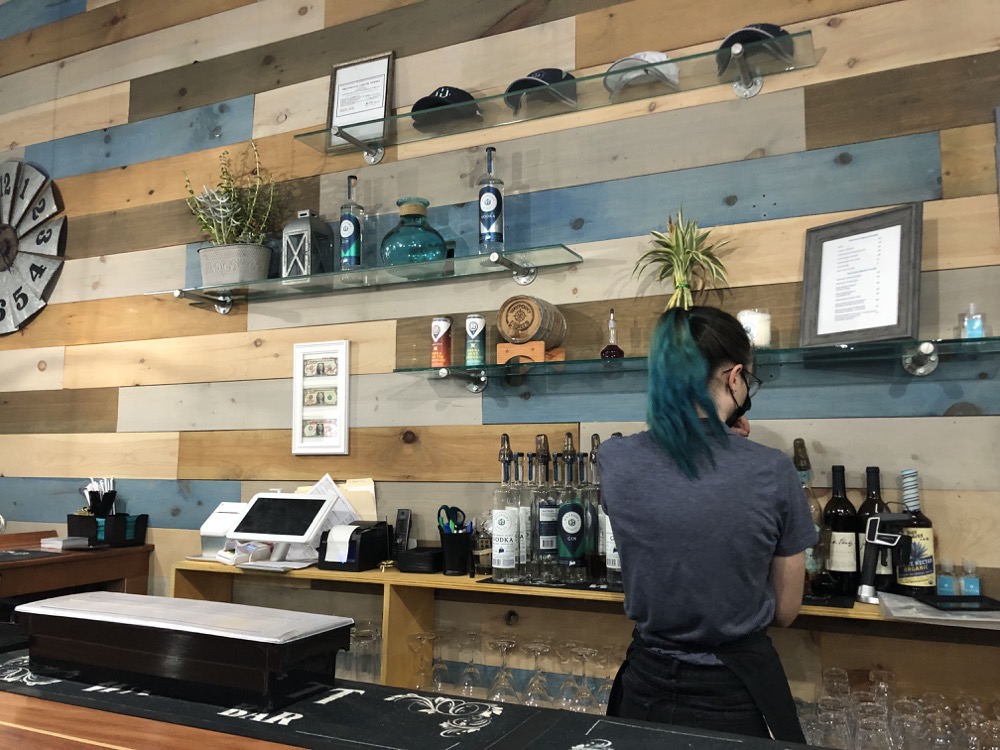 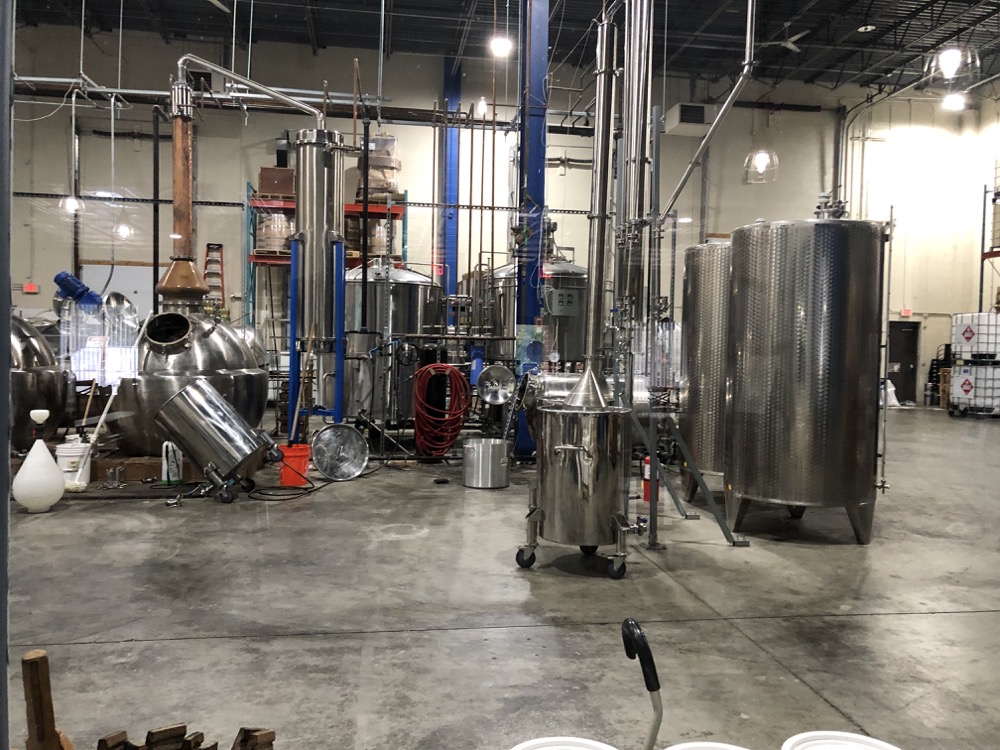 But it couldn’t have been what it is now. Now? Now it’s as nice as any brewery or distillery taproom in a nondescript building is anywhere else.

I popped in after work one afternoon and was shocked at how many tables there were. Does a distillery really get a hundred people coming in to sit and chat while drinking Waypoint mixed drinks? With room for another 50 or so outside? For their sake, I hope so. There aren’t really any bars in Bloomfield, but there are two very popular breweries, both with large and comfortable taprooms. 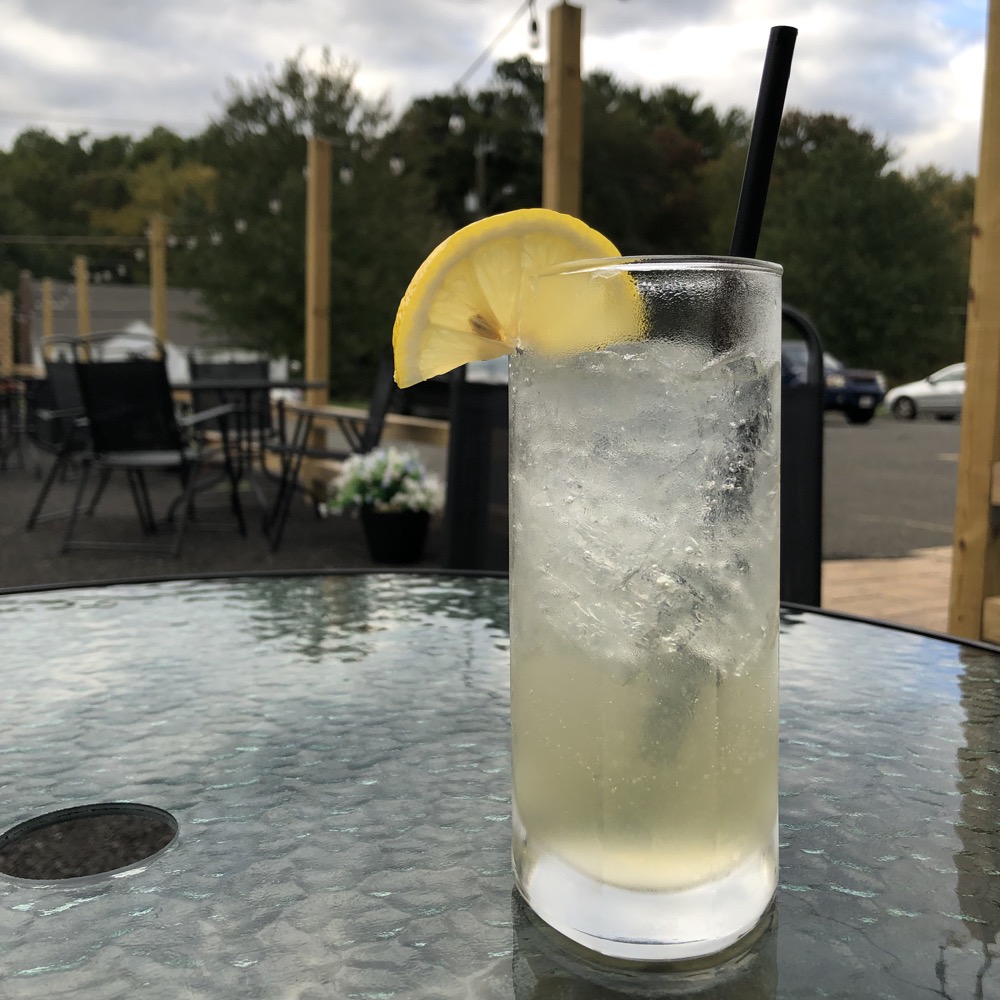 Man, once distilleries start taking market share from bars and restaurants, I don’t know what’s going to happen to that industry. Here at Waypoint, they offer a full suite of drinks with their spirits (rum, vodka, gin, bourbon) and also have beer (including from Back East down the street), coffee, and other stuff. They have the charcuterie and pizza and pretzels necessary to skirt the food service rules as well.

I can’t get over how much seating this place has now. 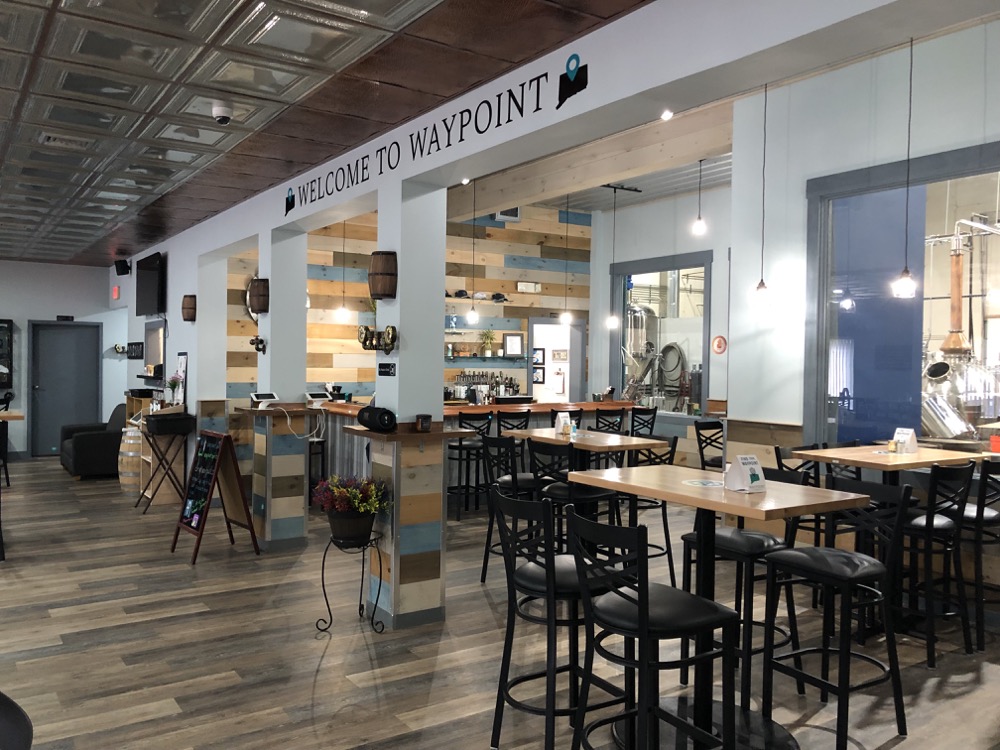 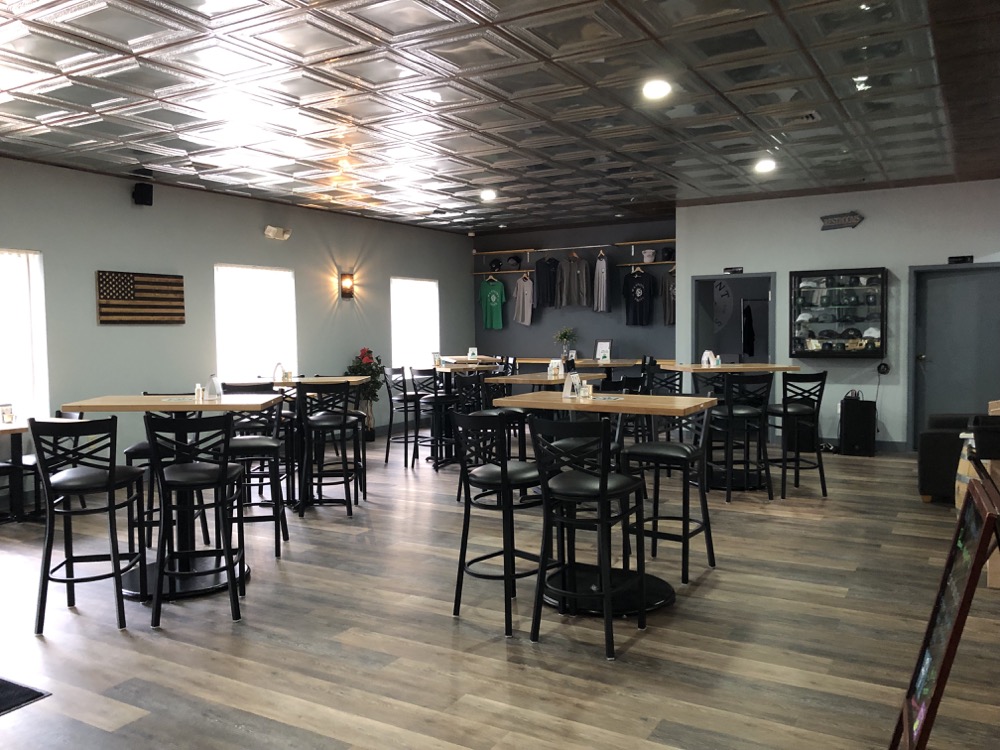 For my part, I slipped outside with my Woodland Citrus Smash. This was made from their Wintonbury citrus vodka, agave, lemon, and elderflower liqueur. I almost never drink vodka drinks – actually, I have about 3 drinks with liquor per year in total these days – but I wanted the fruitiest drink on the menu. It was pretty good, and for $9, I wouldn’t complain about the liquor content.

In addition to the “citrus vodka,” Waypoint also makes a cardamom gin coffee liqueur, and sells some sort of vodka iced tea drinks in cans. With the size of the production here, I’m sure they will be rolling out new and different flavors and mixed cocktails in cans as they continue to grow and progress. 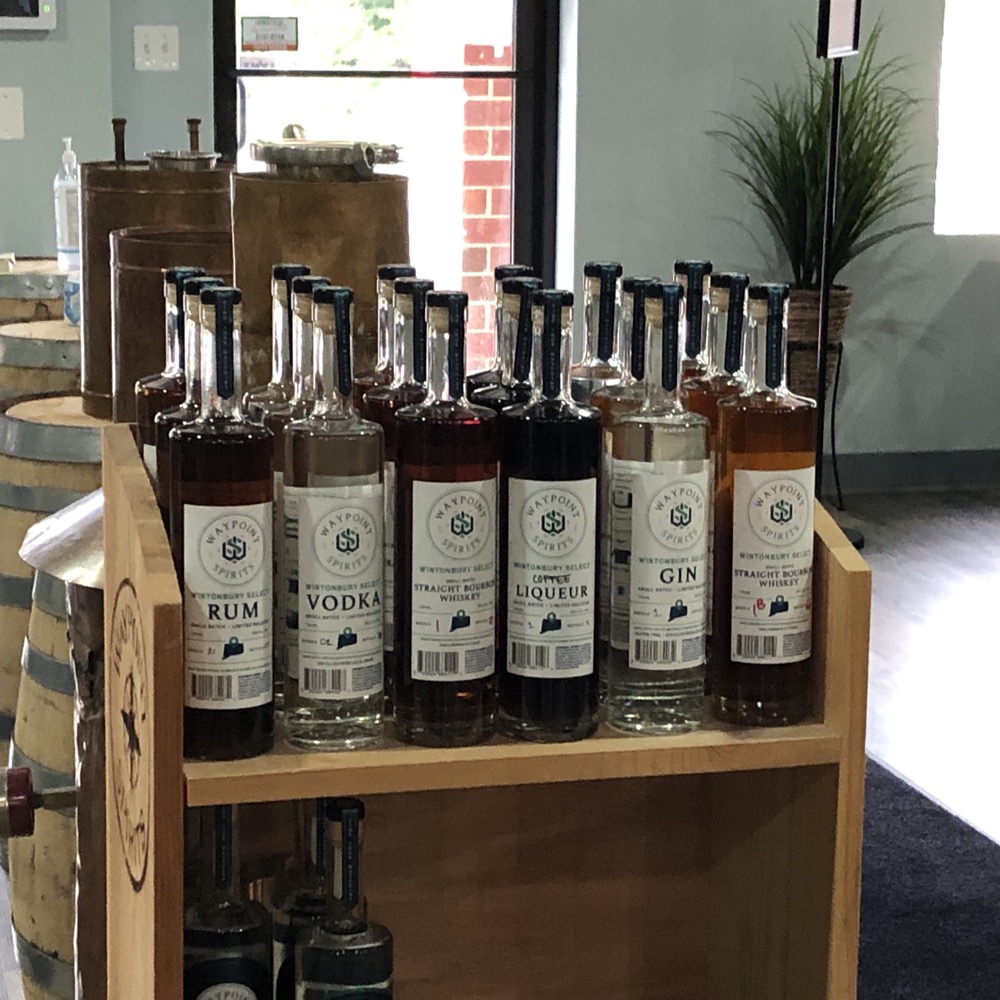 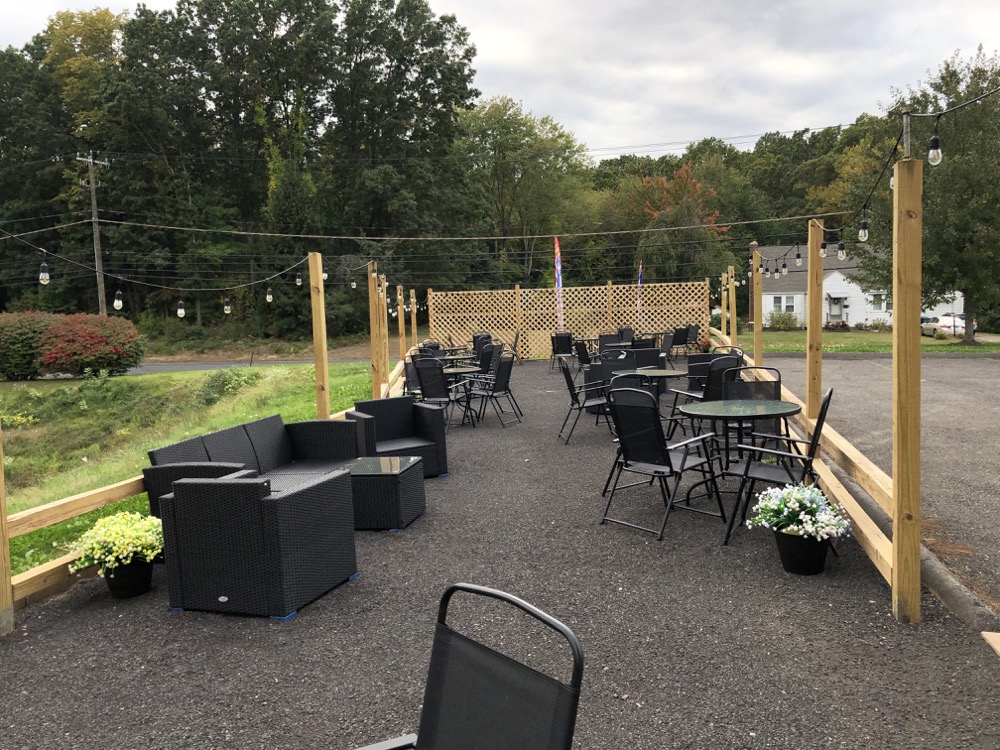 As I finished up my drink and returned inside, people were filtering in. A couple on what appeared to be a Tinder date, a group of five from a nearby office. They all seemed happy to be winding down at Waypoint Spirits.

If this place can work in an ugly building along an industrialish strip in Bloomfield, mere minutes from two large and popular breweries, then this whole “craft distillery” thing can work anywhere.

I guess I’ll find out. 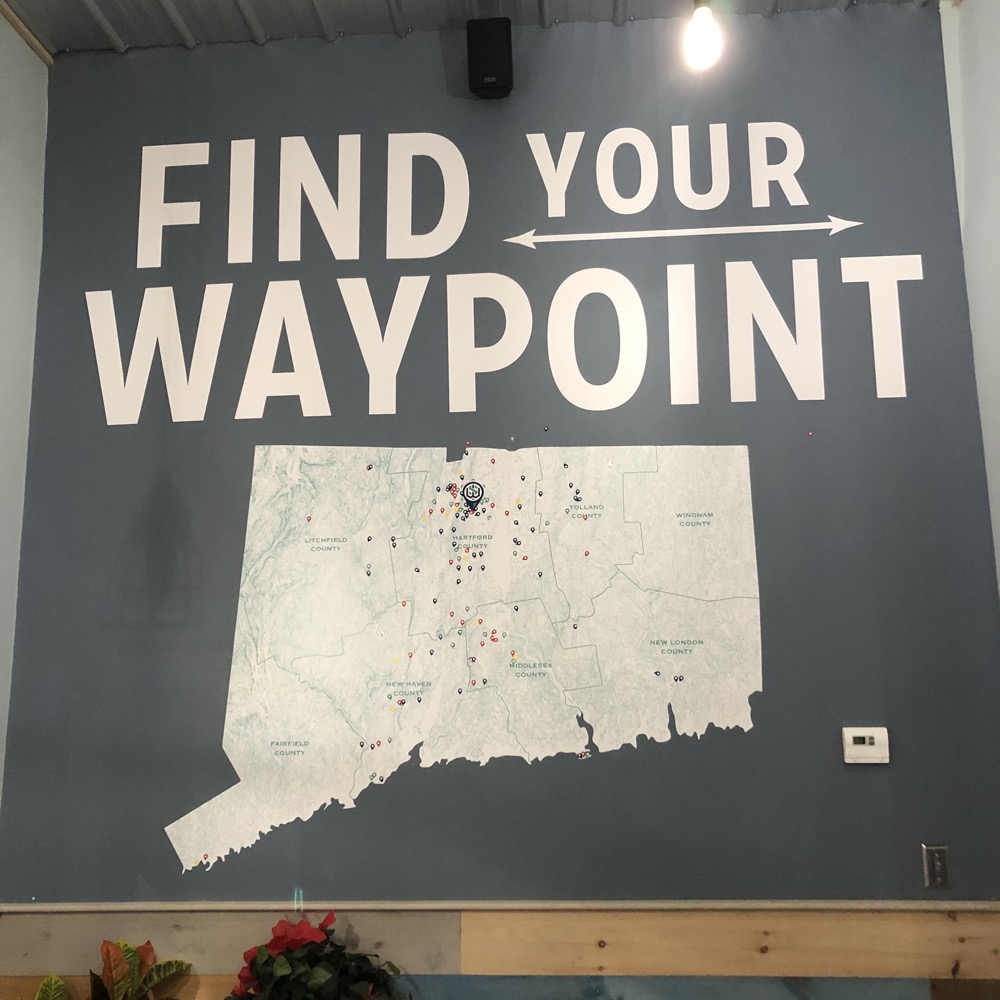 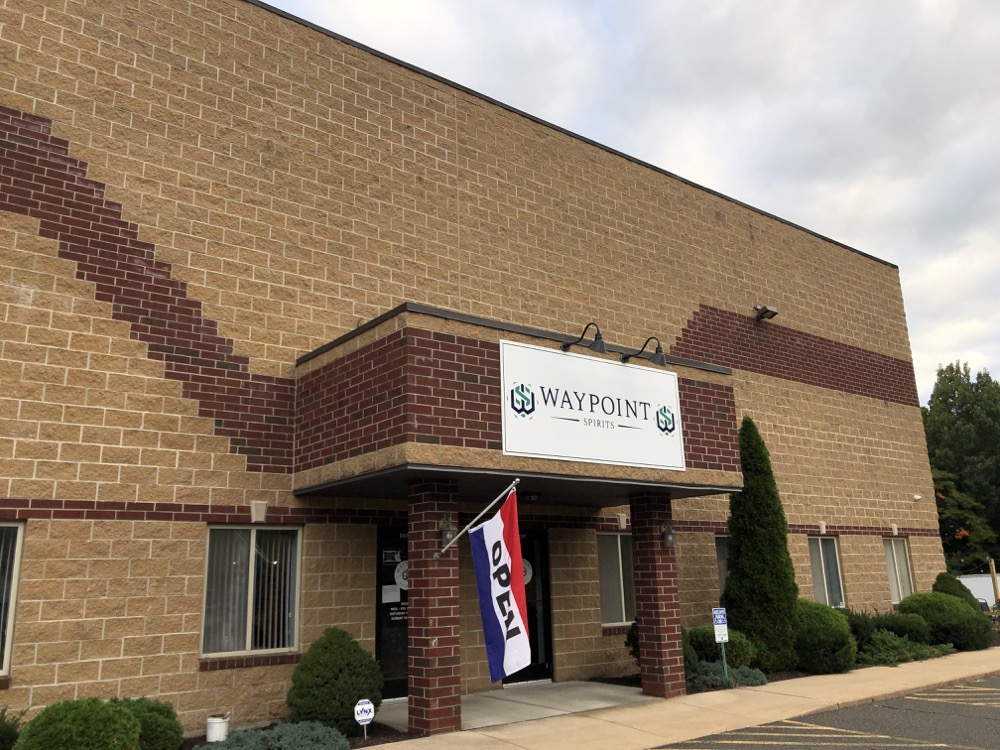