The Yale-Myers Forest is huge; bigger than many of Connecticut’s state forests. Unsurprisingly, it is Yale’s largest land holding (7,840 acres), covering huge chunks of land in the towns of Ashford, Eastford, Union, and Woodstock. If curious, Yale also owns several forests in Vermont and New Hampshire. Today you learned. 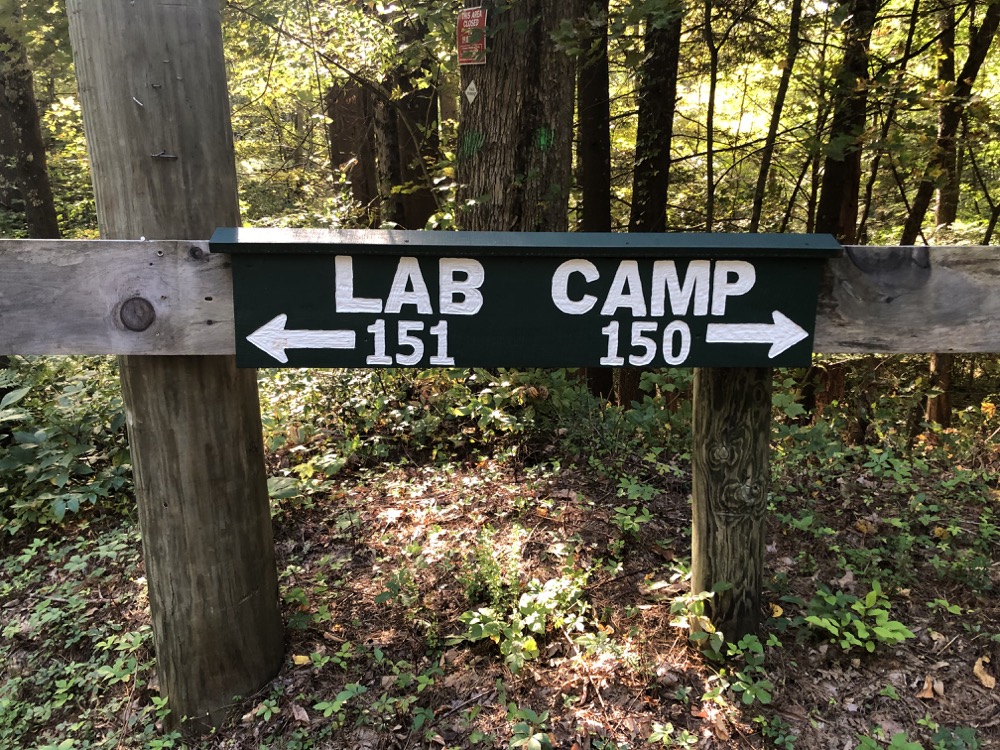 As Yale-Myers is privately owned, they can do with it as they wish, and that includes allowing you and me to traipse around in it – as long as we are respectful. Please be respectful.

The forest is named in honor of George Hewitt Myers, who was part of the forestry school’s first graduating class in 1902. He generously gifted this forest to the school in parcels from 1930-1934. One interesting bit of history is that some of the land which became Yale-Myers Forest was part of the “Union Lands” landholdings sold in 1720 by the colony of Connecticut’s General Assembly to support Yale College’s move to New Haven. Two centuries later the land that was originally sold to support a fledgling Yale College came full circle and became the Yale-Myers forest to support a fledgling Yale Forestry School. 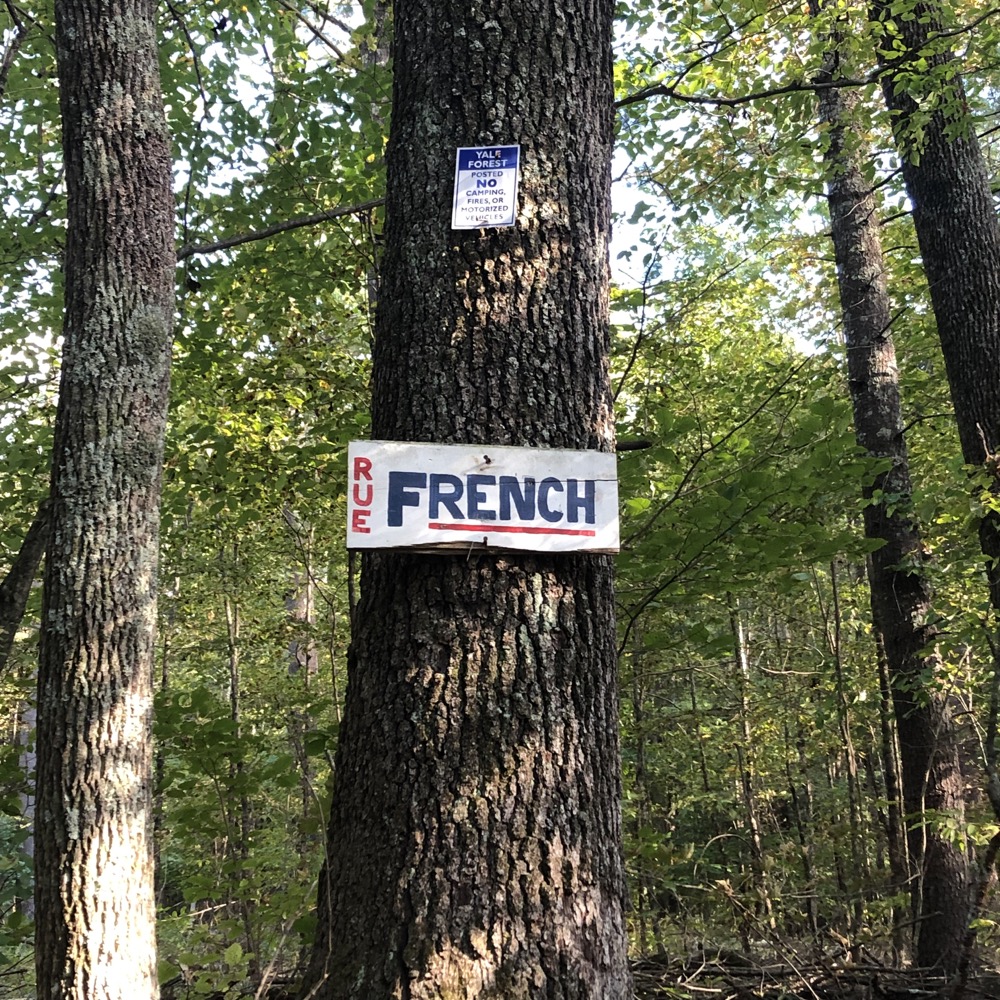 Yale-Myers Forest hosts students, apprentice foresters, and researchers throughout the year at a full suite of camp facilities. And since this is a fancy Yale thing, the “camp” is quite nice with bunkhouses and a kitchen building in addition to a new (2018) lab building. The lab is deep in the woods about a mile away from the camp. The camp, lab, and Red Front Trail are all off of Centre Pike, which is smaller and more woodsy than any other “pike” I’ve ever driven on.

There are other parts of the forest with woods roads and unmarked trails, and as such, I won’t be discussing them – or even suggesting you explore them. Even the blazed Red Front Trail is a bit wonky, and these northern woods are deep and dark. You don’t want to get lost up here. 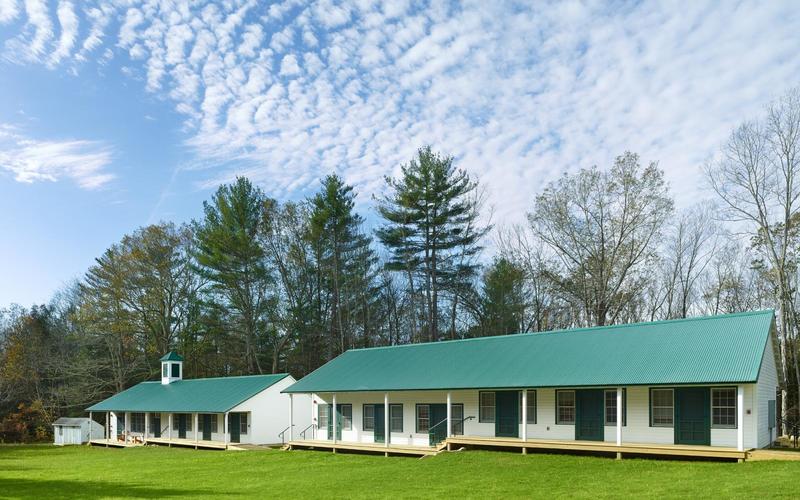 However, if you want to walk these woods differently than I did, you can park near Lost Pond on Route 171 and wend your way southwest towards the camp. Reading my friend Matt’s account of these woods on his Explore Connecticut site explains this route – and its pitfalls – a bit more. It does sound a bit exciting though:

Taking the left trail, about 0.3 of a mile downhill, is a view of the reservoir and a newly rebuilt bridge (2019) over the Branch Brook outflow from the reservoir. Continuing in this direction there will be a side path off to the right downhill towards the brook. Here you will find narrow ravine lined with stone foundations, likely the site of the Morse family mill (see History section below). There are still axles and gears slowly rusting on the ground. Scouting in the woods just south of the mill ruins is a secret treehouse.

The Nipmuck Trail travels north-south through the forest just west of where I (and Matt) hiked. I parked at the dirt road that heads north to the camp. Assured that the Yale folks are friendly to visitors, I first walked up to check out where the wealthy and smart future foresters of America get to live. It’s very nice, but I felt like an intruder and immediately returned to Centre Pike and kept heading south towards the lab facility. 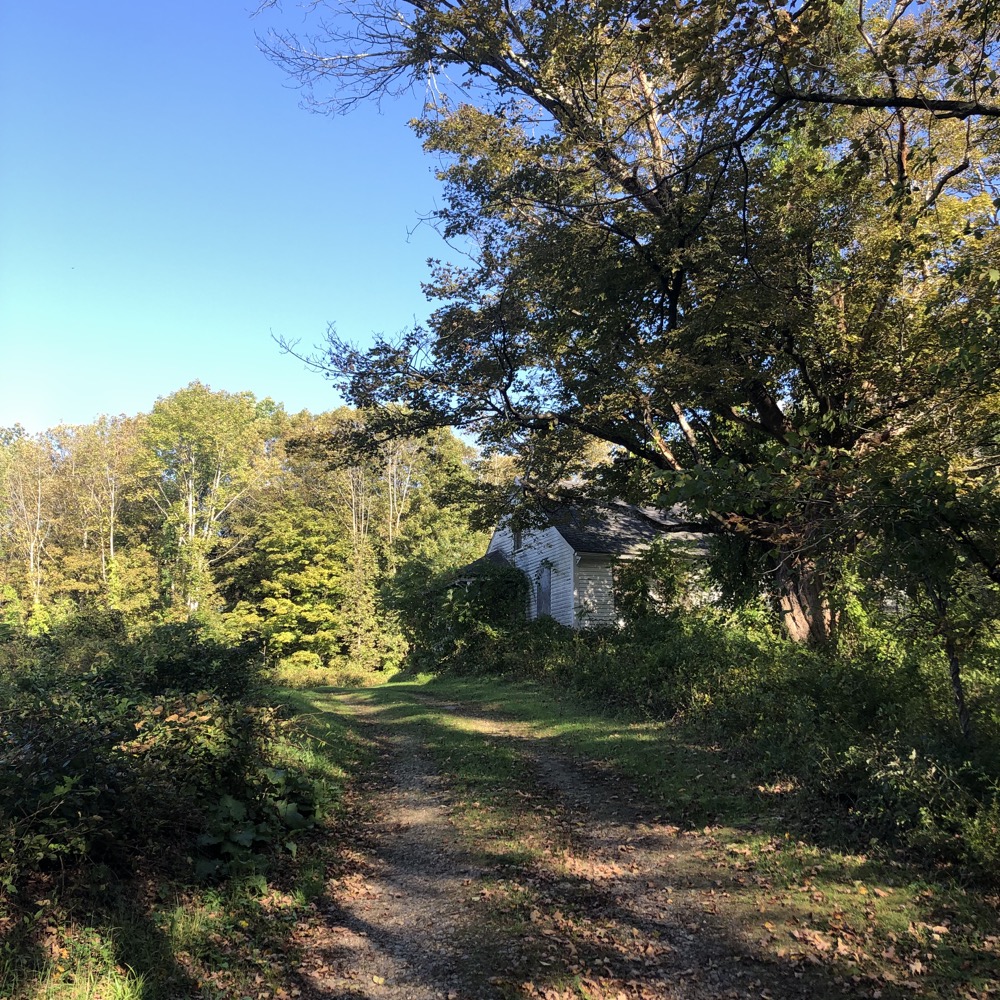 I should mention that I also had no idea where I was actually walking. In truth, I was searching for the Red Front Trail, which had recently been cleared and blazed with the intention of inviting non-Yale students like me to walk an educational loop in their forest. I walked the road, passed a really creepy beat down old house, and then to the gleaming new lab facility. It’s Yale. When you build a lab in the middle of the woods in Eastford, you still do it up nicely. You even name the road “Rue” because it’s in the “French” parcel because you’re smart and clever. 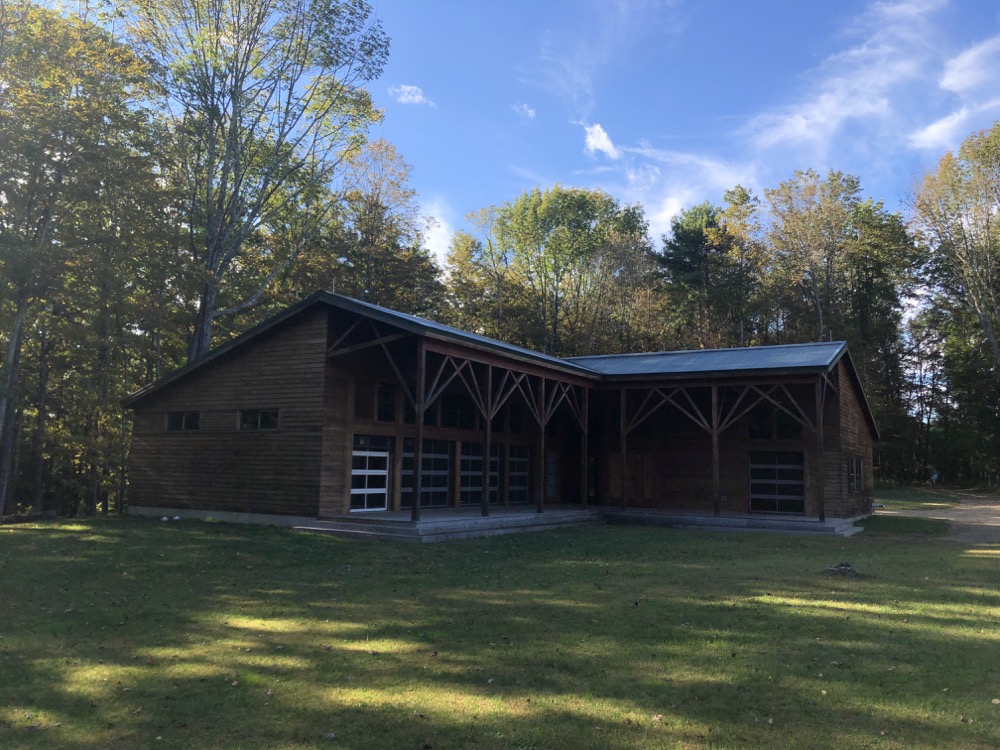 After returning to my car, frustrated, I left the area and went to hike elsewhere on the Boston Turnpike Trail. Hurrumph.

After returning home and studying a map to see where the Red Front Trailhead is, I made plans to return. Ten soccer weekends later, I made it back up to Eastford and the dang Red Front Trail. You definitely need to know where it is if you plan on hiking here – it’s pretty far west on Centre Pike Road on the south side. There is even a little parking area… not to be confused with all the other similar looking parking areas around here. 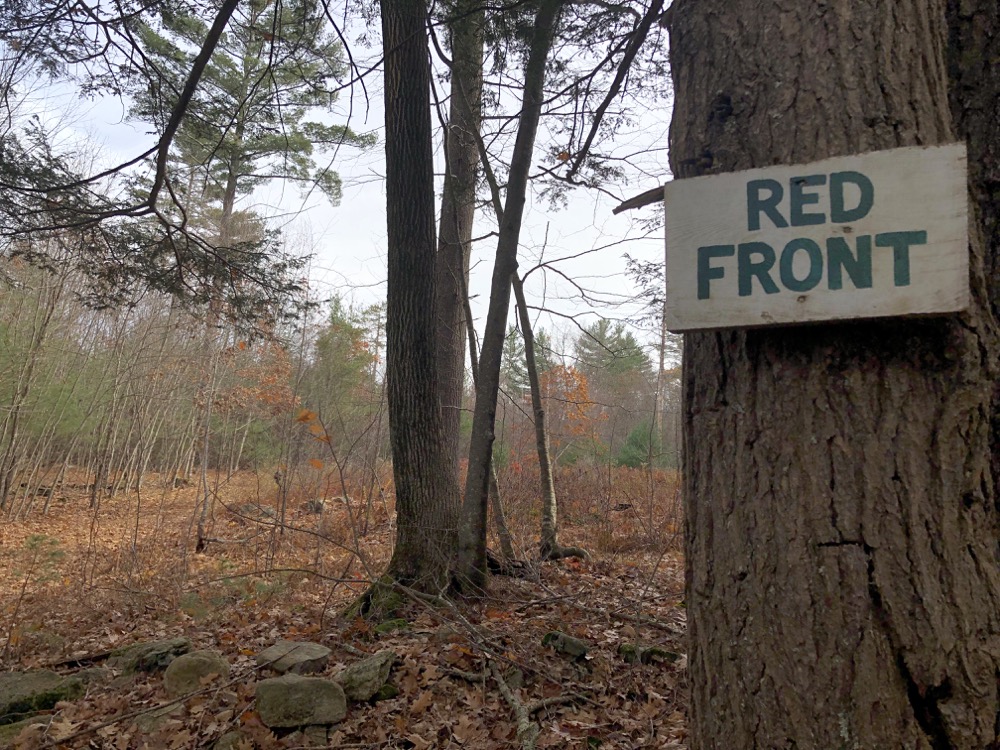 Red Front Lot is a 180-acre wildlife habitat management and research area within the Yale-Myers Forest. It is unique because it is designated specifically to be managed and studied for wildlife habitat – and also because the public is encouraged to come here and check it out. (I see the irony in my inability to find it initially, yes.)

The lot is called Red Front simply because back in the day, the homestead here had a red front. Yale says that you will notice relics of the colonial homesite: day lilies, planted blueberry bushes, apple trees, and the remains of the house foundation. In November, I noticed none of that other than the foundation. The Yale folks have created a ridiculously detailed and fancy “storyboard” for this trail. I was not able to access it on my hike, however, because it requires a massive amount of bandwidth and that simply doesn’t exist in nowheresville Eastford. 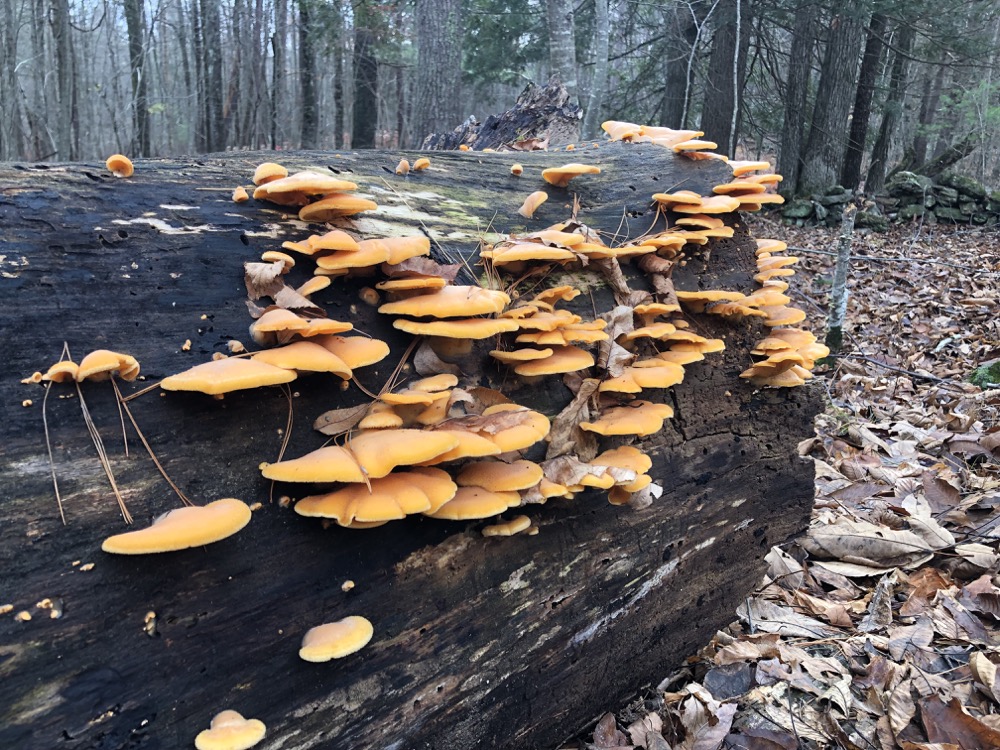 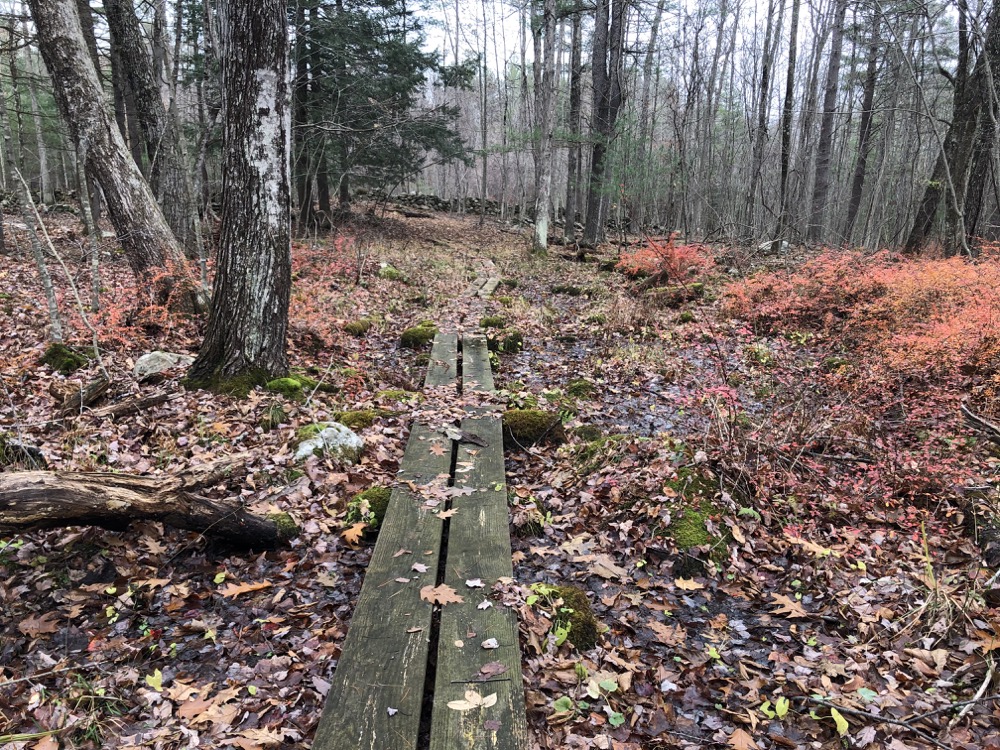 I was walking blind, more or less. I tramped across a field kind of going on instinct. There was a “trail,” but it appeared to be nothing more than a deer trail… at best. Then I found a numbered post (14) and felt better about the situation. This was the trail! I kept going.

I was soon on an actual trail and I could see a little boardwalk and that I was on “the loop” portion. So I began looping clockwise. This took me to post 1 of the interpretive trail. Again, I didn’t have the benefit of a map or any explanations for the 14 posts here. So imagine my frustration when I followed the trail to posts two and three to… a pit, a vernal pool, and a dead-end. 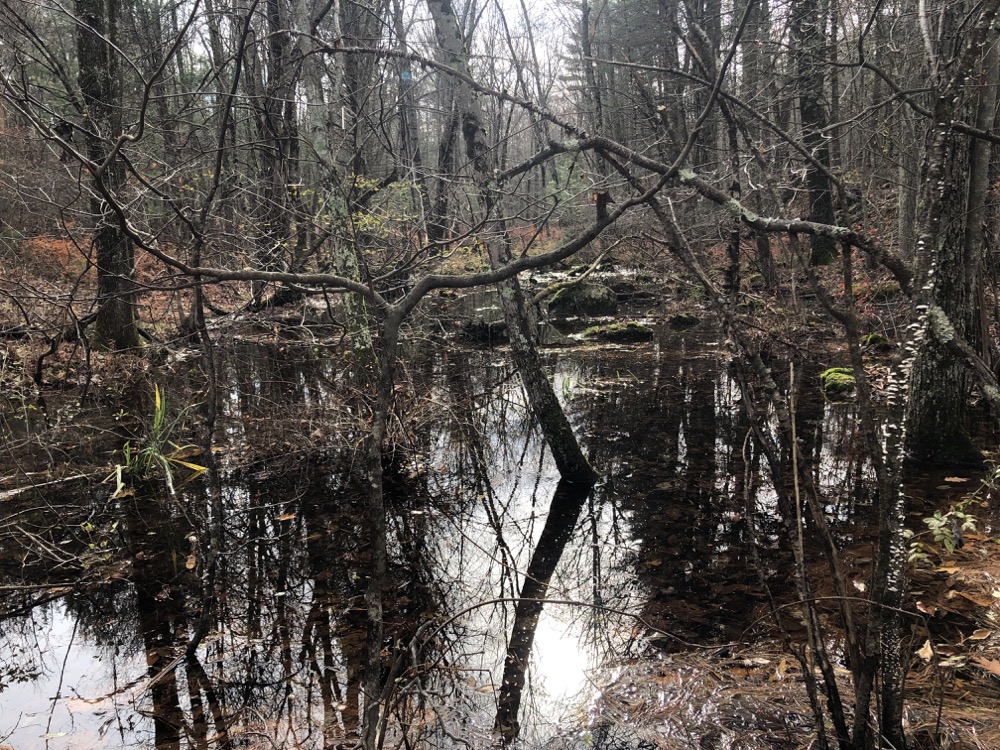 You’ll also notice a large hole at this site, like a ravine has been cut into the forest floor. This hole is a gravel pit from which they mined the glacial outwash to build Center Pike. The geology and soils of this region were shaped by glaciation, and one of our main soil types today is glacial outwash — particles that were deposited by meltwater as the glacier receded almost 20,000 years ago. It’s a relatively well-drained and gravelly soil type, ideal both for red pines to grow and for humans to mine for roads and other uses.

That’s about a fifth of the info Yale provides on their Storyboard for stop two. Stop three right next to it is an area where some Yale people studied the ecosystem of the vernal pool before and after they removed thirty red pines around it. They left some of their equipment here though, which I find rather disappointing. But hey, their research done here was published in Ecological Applications and Ecology, which are both prestigious journals. 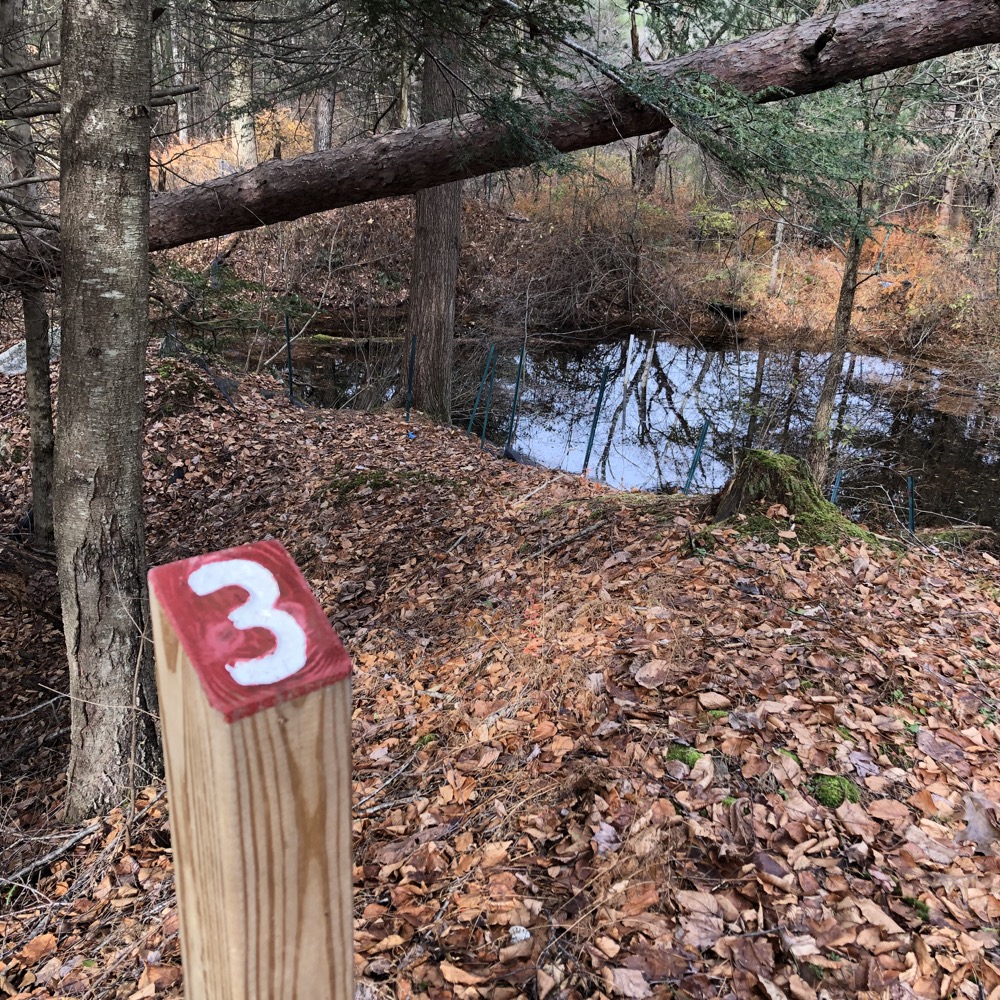 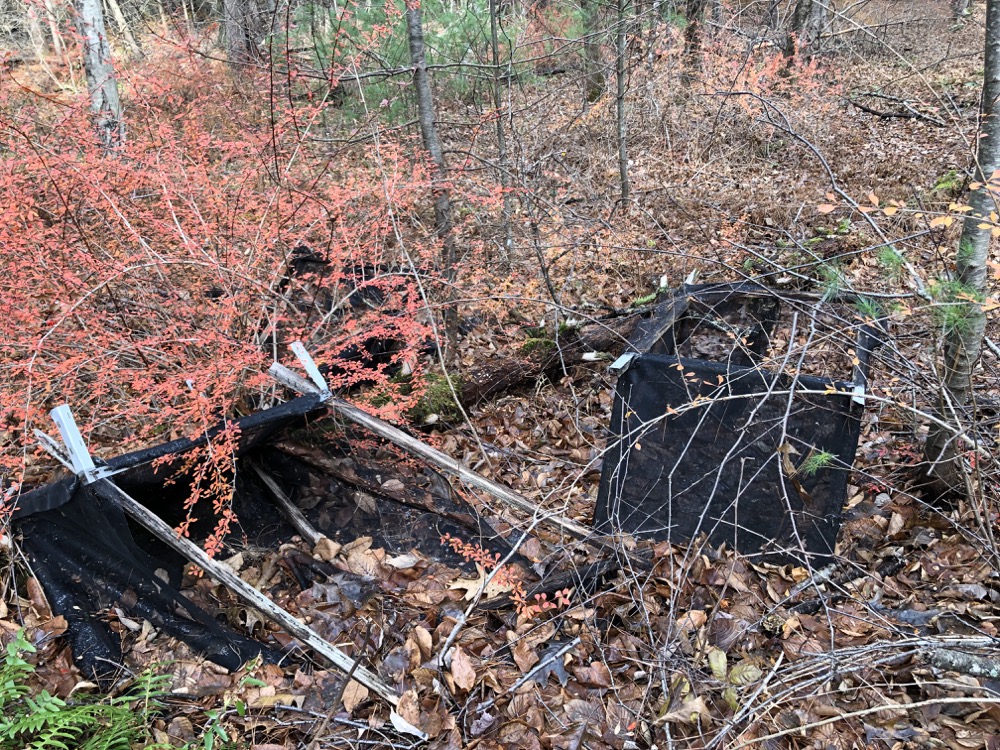 I figured sites two and three was just a little spur trail and I was correct. Back to the main woods road and past sites four through nine. Just forestry stuff, and I’ve already said too much. The trail itself leaves the old road and becomes somewhat difficult to follow again around the top of the loop.

Forest heterogeneity also means that certain areas provide better habitat for specific species than others. The nest boxes that you see at this site are part of a study by Yale ecologists to determine the fitness (survival and reproduction) of white-footed mice living in the area. 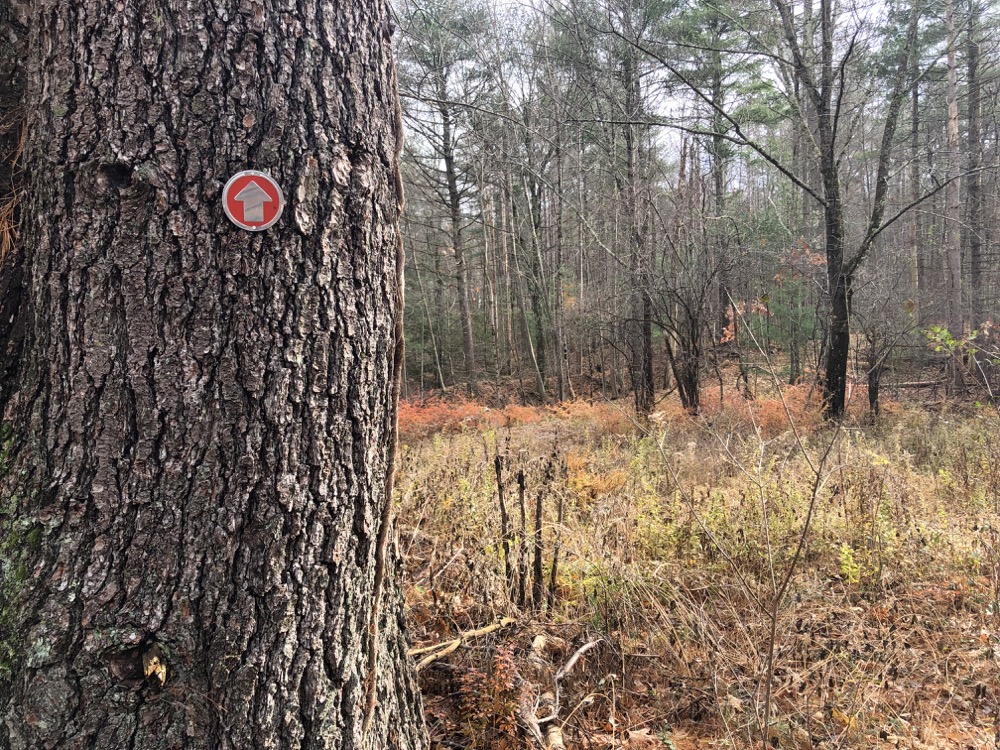 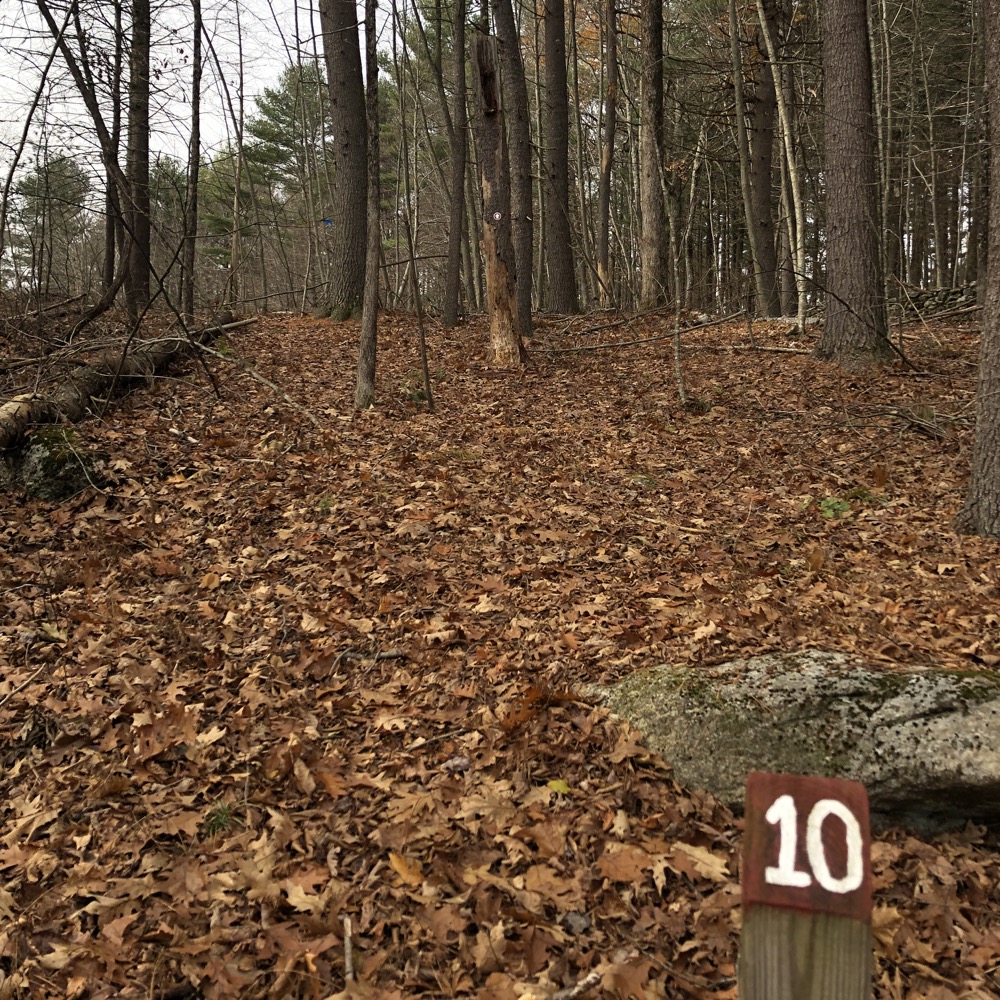 Et cetera. I don’t know why I’m writing so much about this trail. I stuck to the blazes, summited a little hill, walked through a red pine stand, got snookered by another spur to a boulder at site 13 (Yale calls this a reptile sunning rock), followed the road down the hill (with no markers) and ultimately to that boardwalk I saw at the outset, site 14 in the meadow, and my car.

Owing to its location and general lack of oomph, I don’t see this trail really taking off in popularity. I do appreciate the massive amount of work that went into the trail itself and the storyboard website thing. If you are reading this and had a hand in that (there are like 30 people acknowledged), please know that I read the whole thing and hiked every inch of your trail. Really! I did!

It’s neat that Yale owns so much forestland here and in northern New England. How else do you study forests if not immersively? And as you can tell, I like full immersion in stuff. 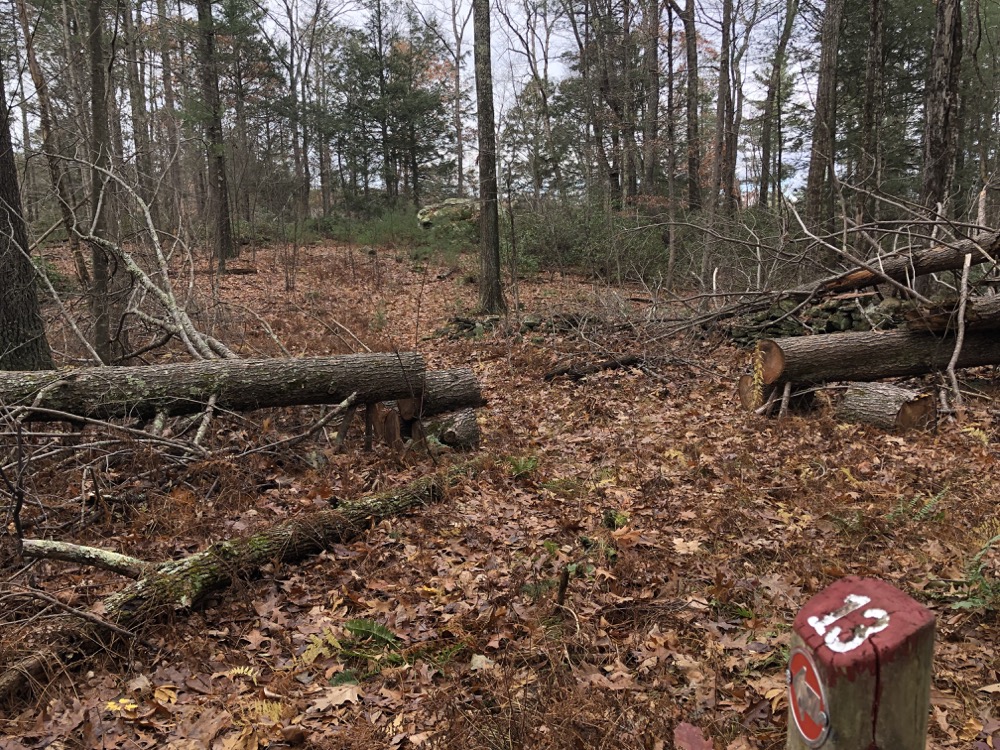 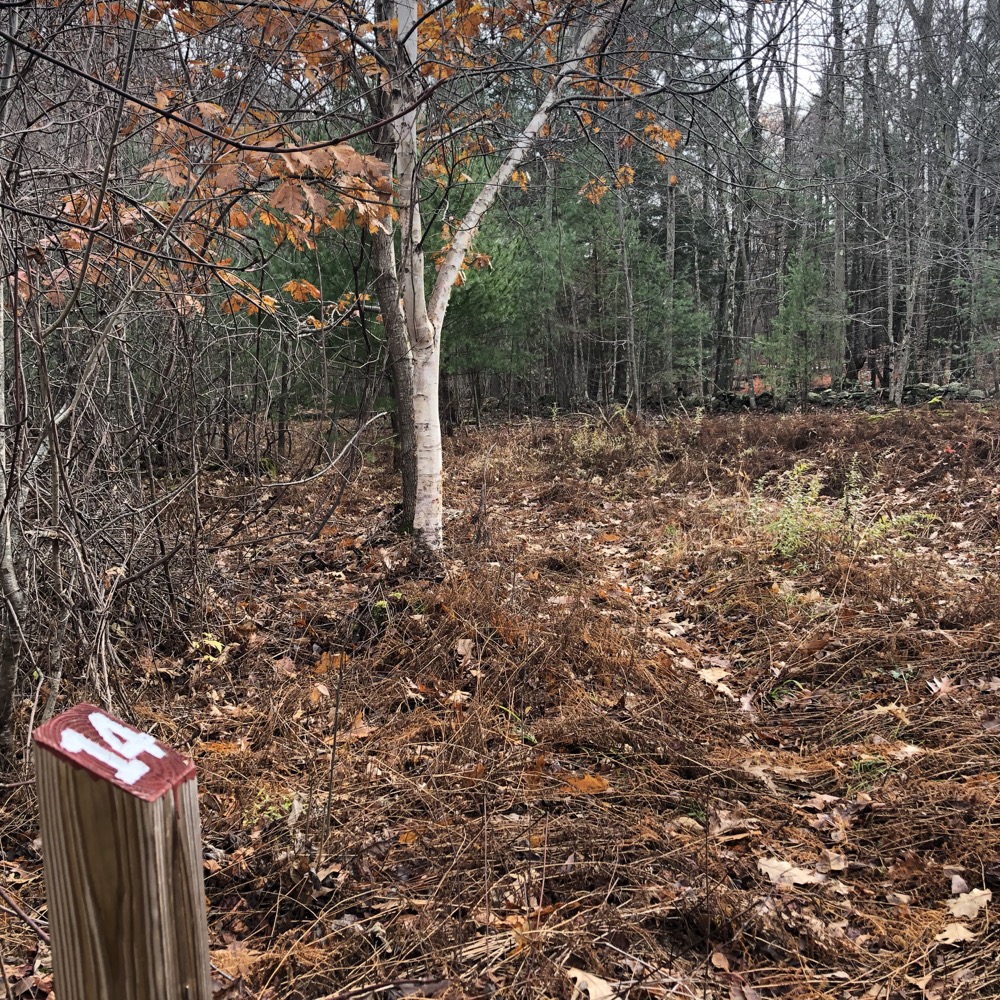