How about some music to accompany your reading.

“Rockville?” you say? “But you’re in Vernon. What gives?” More on that later… As CTMQ readers know, I’m eternally fascinated by Connecticut’s pathological town identity crisis, and Vernon/Rockville epitomizes it. 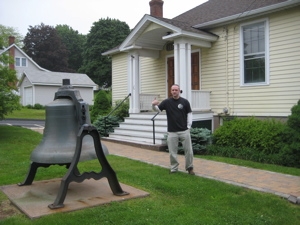 First, the meat of the museum… Even if it is a mere chicken wing. I visited it with freelance writer Dan during my day long march through various museums of varying types in order to give him a good dose of what CTMQ is all about. I warned him on our drive up to Vernon that some town history museums are really quite small and often not the most interesting places I visit at first blush. For some reason, this excited Dan. Yeah, I really like his style.

We arrived at the brick building that looked like a house turned into a dentist’s office now being used as a little museum. There is a large bell out front that I never inquired about as well as a small but insanely sweet-smelling garden towards the back. I was shocked to see about 6 cars in the lot and marveled to Dan that this place must be awesome. 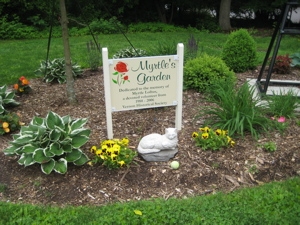 We entered and as per usual, were greeted with that, “Are you lost?” inquiry. Nope, we were there to see the museum! The poor woman was somewhat shocked by that and deferred us to another woman who was on the phone at the moment. So we poked around for a few minutes, noting the case of local business tchotchkes, a couple paintings, a quilt and some books.

Then our tour guide appeared to take us into the real museum. After she got over her “Are you lost” face, we eagerly anticipated stepping into the larger exhibit room. Ahh, not yet. The woman, Carolyn Blouin, guided us over to the middle of the room to quickly discuss what we’d already seen. 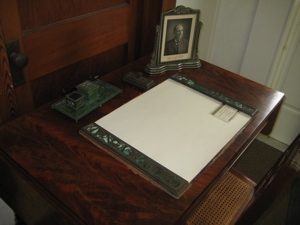 There was a little desk with a nice desk set on it that was made by Louis Comfort Tiffany – check that, it was a replica but Tiffany was from these parts (Okay, he was from Killingly a ways away, but there is an interesting parallel between Killingly and Vernon… In due time) and that’s good enough for us.

Then we were shown the glass case containing a bunch of old freebies from local businesses. Those paintings I mentioned were done by Charles Ethan Porter, a black painter who died in obscurity but found some fame after his death. Sigh, isn’t that always the way? The Vernon Historical Society Museum has one of the most extensive collections of information available on Charles Ethan Porter (1847ish-1923).

At least the Connecticut Freedom Trail has two Porter stops on it. I went to both.

Charles Ethan Porter was an African American painter born in 1847 or 1848 in Hartford. In 1857 his father built a house in Rockville, and Charles graduated from high school here in 1865. Porter went on to study at New York’s National Academy of Design, one of the country’s most prestigious art schools and opened a studio in Hartford. 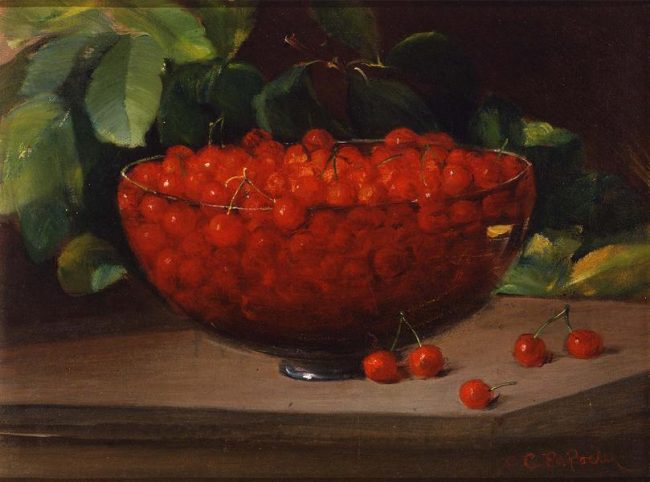 Porter worked in Europe, Hartford and New York, returning to Rockville in 1889. Toward the end of his life, his fortunes declined and he peddled his paintings door-to-door, trading them for food or flowers to paint. He died in Rockville in 1923 and is buried in Grove Hill Cemetery.

Although he died in poverty, Porter is remembered as the creator of minor masterpieces of American still-life painting. Among Mr. Porter’s pupils was one destined to become far more famous than his master. He was Gustave Adolph Hoffman. The works of Gustave Hoffman are also on display at the Vernon Historical Society Museum. 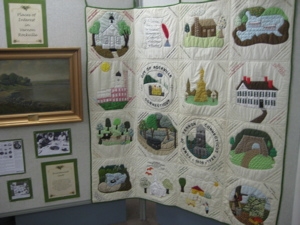 And there’s the quilt again… Nice quilt. Every town seems to have a quilt of some historical significance. At this point we had to ask what the other five lovely women were doing there and learned that these volunteers were cataloging WWII postcards the town had collected alphabetically for the archives. They seemed to all be friends and to love the work they were doing.

We moved over to the far corner to look at some books and a couple old maps – maps showing a delineation between Vernon and Rockville. Is the song done? Time for another…

What an odd selection, eh? Not really, for that is Gene Pitney! The Rockville Rocket! Pitney is celebrated all over Vernon and I’d heard rumors of a Gene Pitney Museum for years. He died in 2006 and there was a Gene Pitney exhibit at the town hall afterwards and I’m still trying to figure it all out.

Back to the song… its title is a bit portentous. For the Vernon-Rockville split shows no pity and is not for the weak. It is Connecticut’s Springfield-Shelbyville battle. The Hatfields and McCoys. Serbia-Croatia. Georgia-South Ossetia. Perhaps I’m exaggerating a little bit. 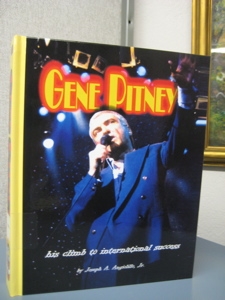 After nearing getting smacked in the head for being unfamiliar with Gene Pitney’s opus (seriously, gasps of horror rose up from all the ladies present upon my admission), I asked the question that gives Mrs. Blouin goosebumps. And that is, “So… What’s the whole deal with Vernon AND Rockville? I realized every city in Connecticut has towns, villages, boroughs and such within their borders, but it seems different here somehow.”

“Take a seat boys,” she said, and got serious. It turns out that there are still tensions in town about the town nomenclature. We thusly enjoyed a 20 minute dissertation on the derivation of Vernon and how those who live in the Rockville section of town would never DARE to even suggest they actually do live in Vernon. The following is purely from memory, so forgive me.

In a nutmegshell, back in the day (early 1800’s) a certain area in these parts fathered a prosperous mill industry. Other businesses popped up and the area, over the years, got things like electricity and sewers and schools and a post office. The area surrounding this business district was known as Vernon, which had become an incorporated town in 1808. Vernon was all farms and rural folk – poor roads, terrible schools, no sewers, no nothin.’ 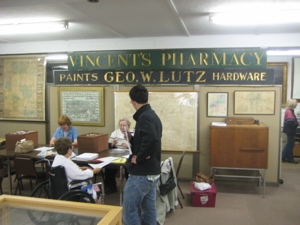 Years went by and The Vernons wanted a piece of the Rockville pie. Keep in mind that Rockville is only 1.7 square miles but then accounted for 99.9% of the wealth, business and class of Vernon. The Vernons decided they wanted Rockville to be a more cohesive part of Vernon, but Rockville balked. Why should they spend money to give running water to the Vernon bums? This went on for a hundred years.

Then the mills died out when manufacturing moved to cheaper places. Aha! Now Rockville needed Vernon’s size and reliable industry to save it! Flaming pitchforks were surely alight as the towns battled it out – the tables had turned and a good old fashioned brouhaha came to a head.

But what to name the unified town? Hoo boy, this was another ugly battle. Vernon won apparently because the town voting center was in the Vernon part of town. Rockvillians, as I’ve mentioned, never accepted that and still only refer to their Rockville. Rockville didn’t actually officially incorporate into Vernon until 1965! 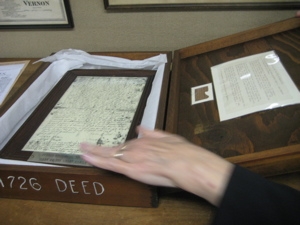 Oh there’s more! The town high school is of course Rockville High School. Highways signs all say “Vernon-Rockville.” Rockville has its own website which is worth checking out merely for the sunset picture. They hardly even acknowledge that they all live in Vernon like the rest of the world acknowledges. I love this stuff.

While Carolyn told us the whole sordid tale, the women across the room began arguing about the subject. I heard one woman say, “I went to ROCKVILLE High School” and another claim that without Vernon, Rockville never would have come back as it did in the 90’s. I joked that “Rockville” is certainly a cooler name than “Vernon” which got a stern rebuff from another, closer woman. I tried to make peace by noting that my preferred name is Talcottville, the lesser known village within Vernon. Nothing but glares… Tough crowd, tough crowd.

Astute readers will remember I heard a similar speech during my visit to the Killingly History Museum which is, of course, in Danielson, CT. 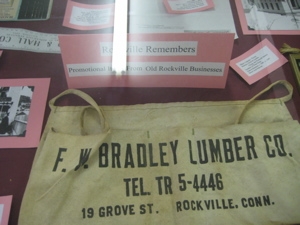 To tie it all together, Carolyn explained that the unique economic circumstances led to the battle. As opposed to say, Plymouth which is divided into three peaceable towns (Plymouth, Terryville and Pequabuck) – hey, did I say Terryville? That’s where we were going next (and here I always thought it was part of Bristol) and the clock was ticking.

So let’s get to the other part of the museum and – what? Really? That was the whole thing? A desk, a blanket, some stuff, a couple maps and paintings and books? Eh, I figure these folks spent 200 years arguing about what dang town they lived in and didn’t have much leisure time to build up a bigger museum. (They do maintain archives and rotate exhibits throughout the year.) 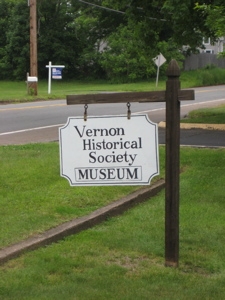 In the end, the conversation with Carolyn was well worth our trip out to Vernon. As much as I love the history behind our town names, I love these types of conversations even more.