Yeo man, the Museum of Andover History is impressive. A true Yeomans effort. (Sorry, I could use that joke reference over and over Andover here. And that one too.) 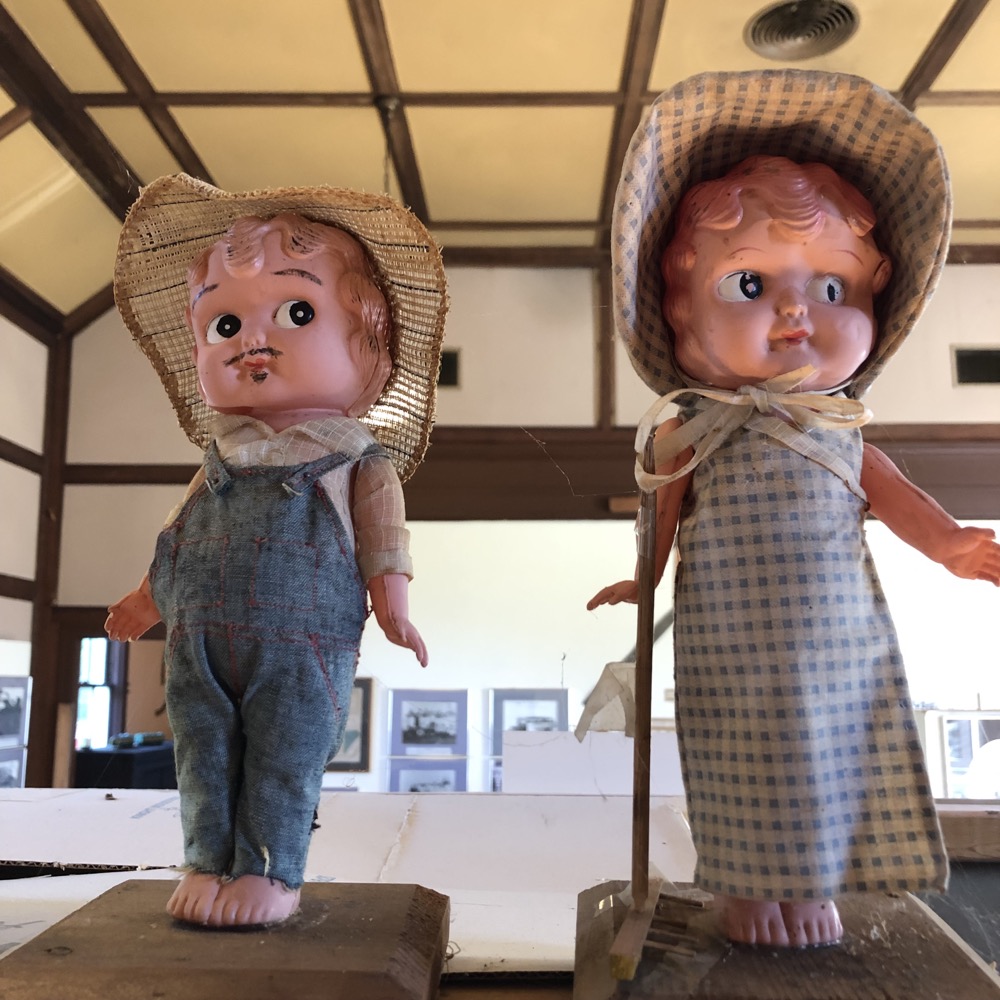 I think before we get going, I should mention that there’s a man named Scott Yeomans who seems to be singularly responsible for everything at the Museum of Andover History. He has written several books about the town, manages the museum, appears to be the lone docent for the museum, writes everything that has anything to do with Andover history… and after spending some time with him, I can tell you he’s a genuinely nice guy to boot.

Knowing now that this whole operation, from the website to the Facebook to the collecting and archiving for, and displaying within, and running of the museum is apparently one Yeomans’ work, I now better understand why it took me several years to step inside the old town hall to view the collection. 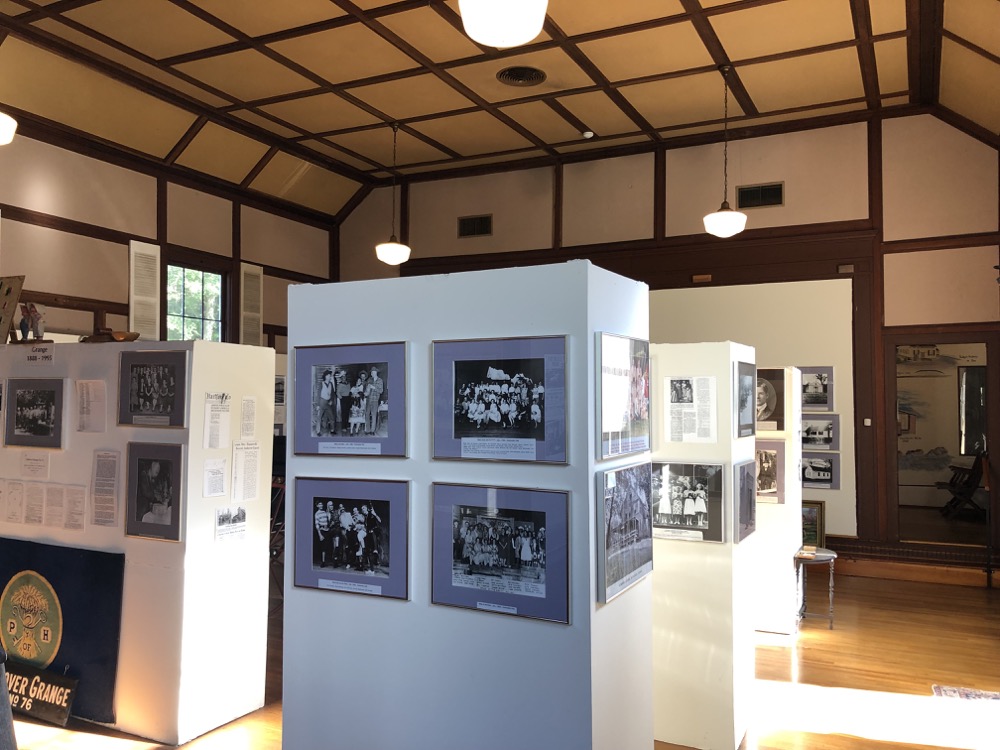 I would look up the hill every weekend day I drove past the building along Route 6. For years. I never saw the “Open” flag flying. Calvin and I rode past it on our Hop River State Park Trail ride. (The museum’s lot is used by cyclists and it’s right next to the cool covered bridge and while I’m at it, it’s also across Route 6 from the wonderfully named Over AndOver curio shop.)

I had written to the then anonymous person behind the website and Facebook page and was told to “call” but I never did. I always prefer a “natural” visit. I’m not special. Then the pandemic happened. Look, it’s Andover’s only museum and I know this sounds weird to, well, everyone in the world, but I really wanted to get inside this place. One random day I happened to look them up again on Facebook, saw they had an open date earlier in the year, and reached out again asking about a future date. so imagine my glee when a note came back that they’d be open a few Saturdays hence, from 4 to 6 PM. (Note: For a small town with a rarely open history museum, there’s a wealth of videos on their Facebook page.) 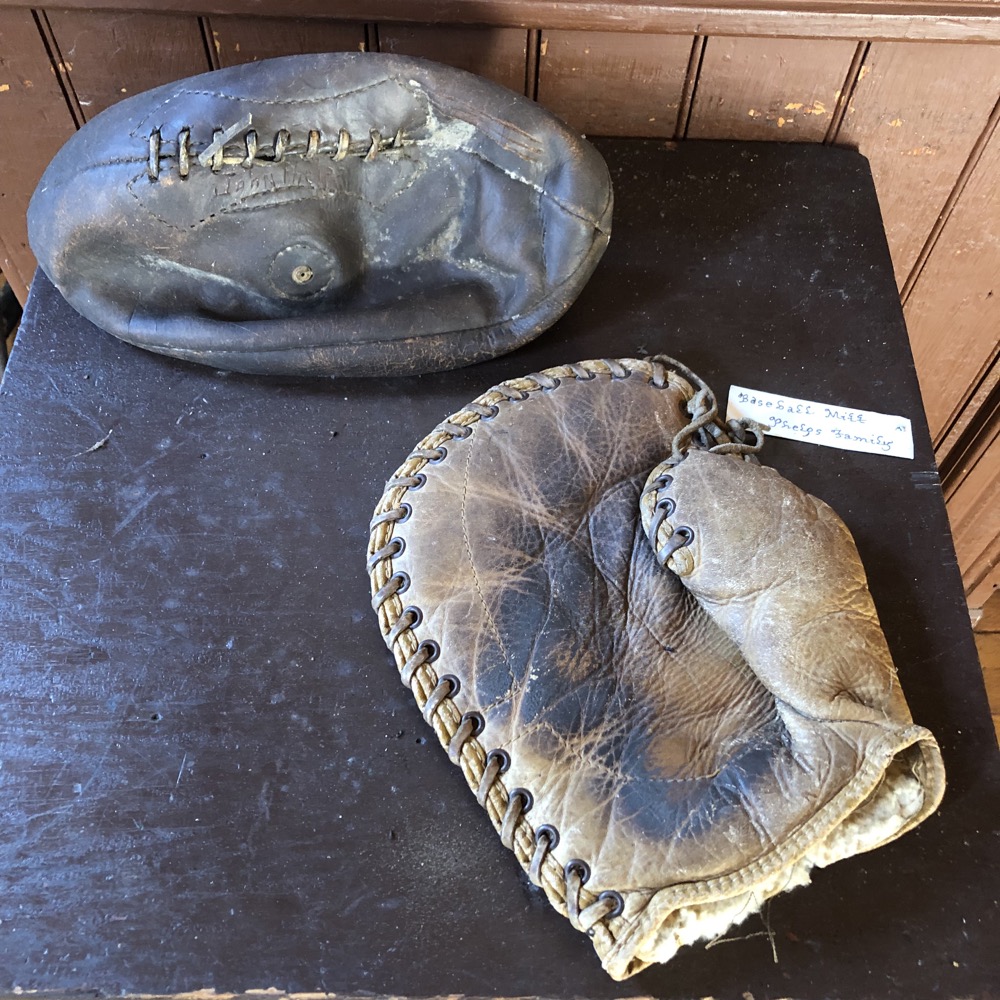 I cleared my calendar. Nothing would take precedence. Wait? 4 to 6 PM? What small town museums have those hours? The Museum of Andover History is a true Connecticut Museum Unicorn.

I drove over to Andover and did some hiking first. I was in full Andover immersion mode. I was done hiking a little early so I took in a soccer game near the museum. The red team kept giving the ball away over AndOver. The clock hit 4 and I raced to the museum. This was it! 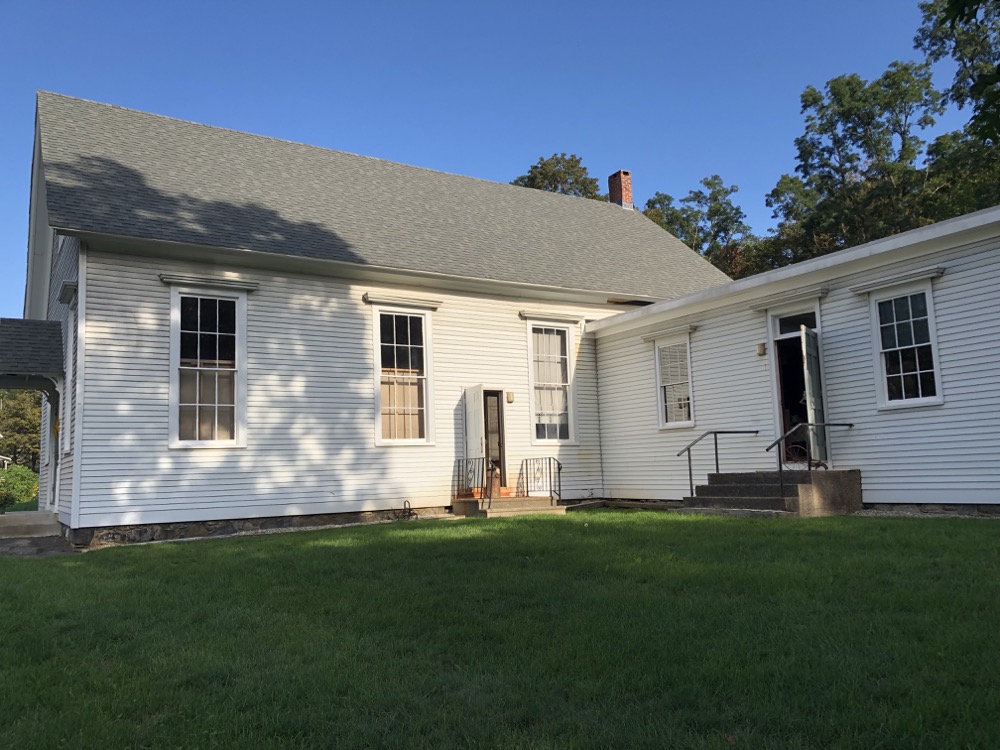 I was greeted by an unknown (at that moment) gentleman who introduced himself as Scott. Over the course of the next half an hour I saw the name Scott Yeomans on books for sale and saw he was noted as the author on every single short essay about Andover around the museum. Later, when looking up some background information for this page, everything everywhere was written by Scott Yeomans. I was in the presence of Mr. Andover. Trust me, if you want to know anything about the sparsely populated southernmost Tolland County town, Scott is your man. 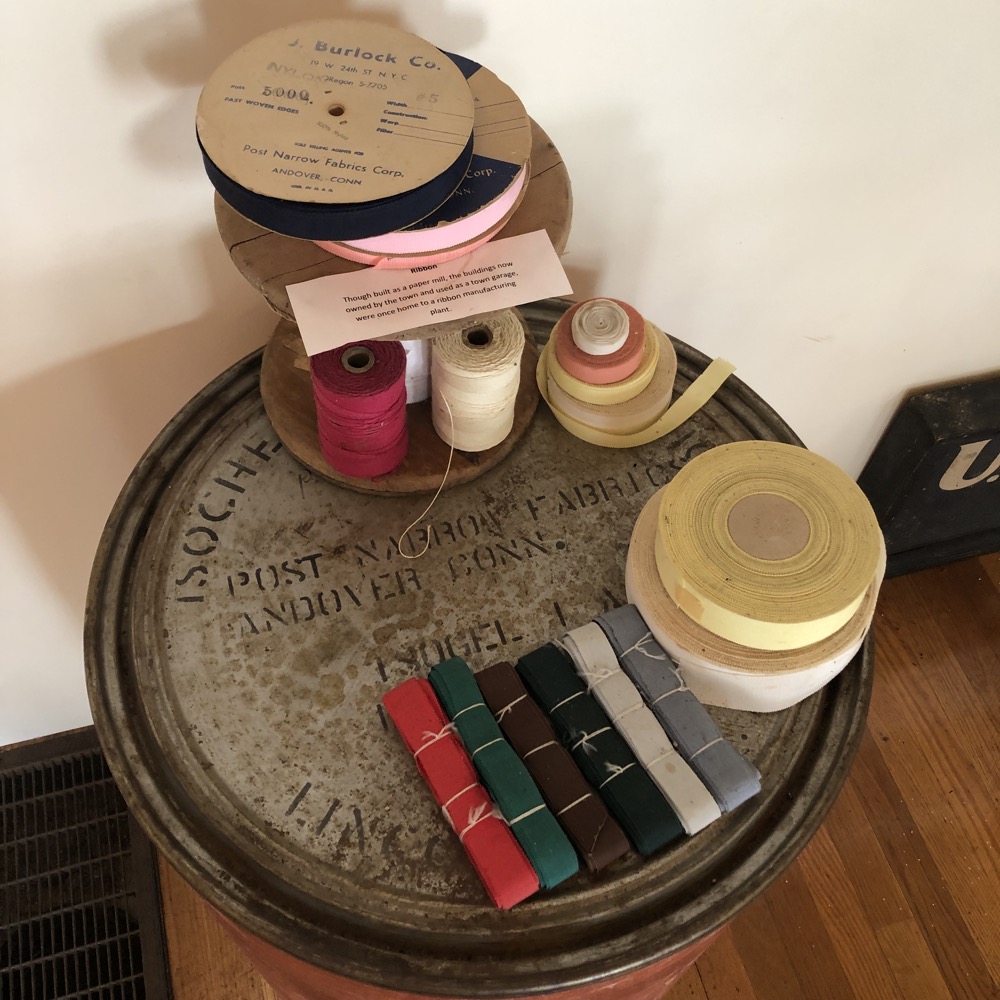 You want to learn about Andover history from Wikipedia? Here’s the entire entry as of October 2021:

Andover was incorporated on May 18, 1848, from Hebron and Coventry. The name is a transfer from Andover, Hampshire, England.

On Andover’s website, Scott has provided a 4,000 word treatise on the town. The choice is yours.

The museum, housed in the old town hall, is divided into two main areas. The first room is what Scott deemed, “a bunch of old junk.” I immediately liked Mr. Andover. “Go ahead and touch anything or ask me questions about the items. These have all been donated by townspeople; Old tools, household items, farm equipment… that sort of stuff.” There’s nothing in this forward room that I hadn’t seen in a hundred other town history museums around the state. Of course Scott had no idea who I was, and I’m not one to namedrop, so I smiled politely and kept listening. 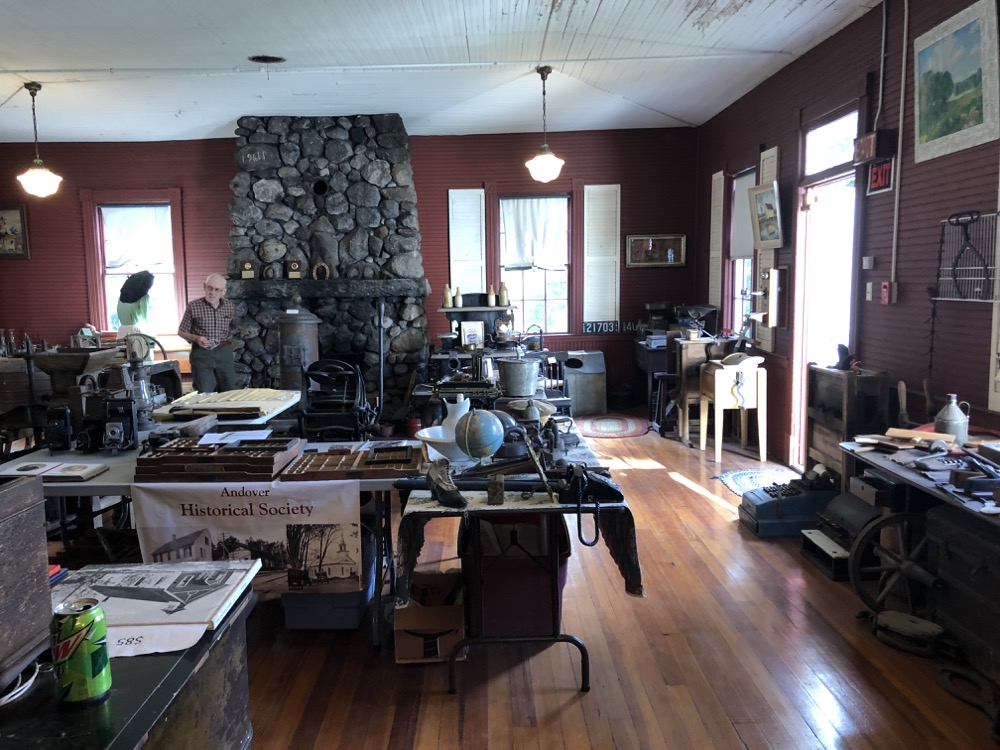 “The back room has rotating exhibits about Andover.”

Ah. I went to the very back and began to learn.

I am not exaggerating when I say Scott has done an incredible job with his museum. The layout itself was a great use of space, but the orderliness and wealth of interesting information presented in a sensible way was really impressive. I did not expect this. It’s immersive and a few of the displays really spoke to me. Notably, there was a really cool timeline of Andover’s creation and another one about Andover Lake’s creation. They included pictures and copies of original documents. Geography and border disputes is my bag! 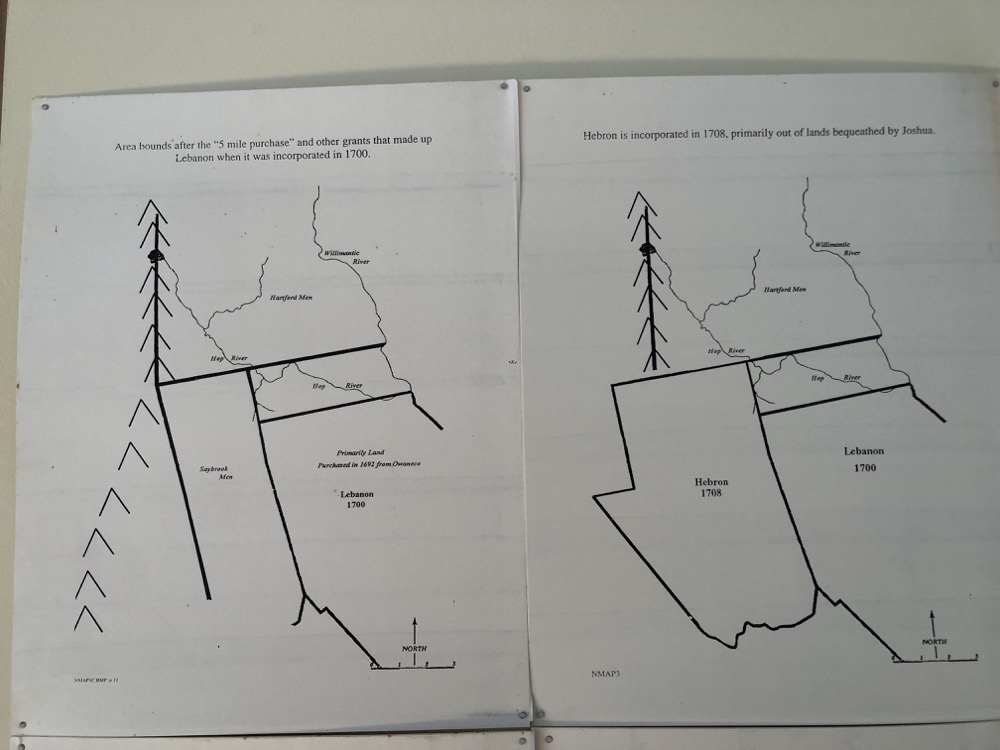 Late to the Connecticut town game, Andover was incorporated as the 146th town in Connecticut in May of 1848. As Wikipedia told us, its lands were taken from the much older towns of Hebron and Coventry. Andover’s borders and its distinction as a unique society, however, date back to 1747. In that year, parishioners of the First and Second Ecclesiastical Societies in Coventry, the Second Society in Lebanon and the First Society in Hebron successfully petitioned for the creation of the Andover Ecclesiastical Society. Yes, Andover existed as an Ecclesiastical Society for 101 years before becoming a town.

And the series of arguments and official decrees about its borders and governance is all here. Great stuff. I learned fantastic tidbits like this: Thomas Porter was the first to arrive in what is now Andover. He bought 100 acres of land and built a house near the modern day intersection of Erdoni and Lake Roads. He thought he was in Hebron and even served as a selectmen for that town, though he was really living in Lebanon. 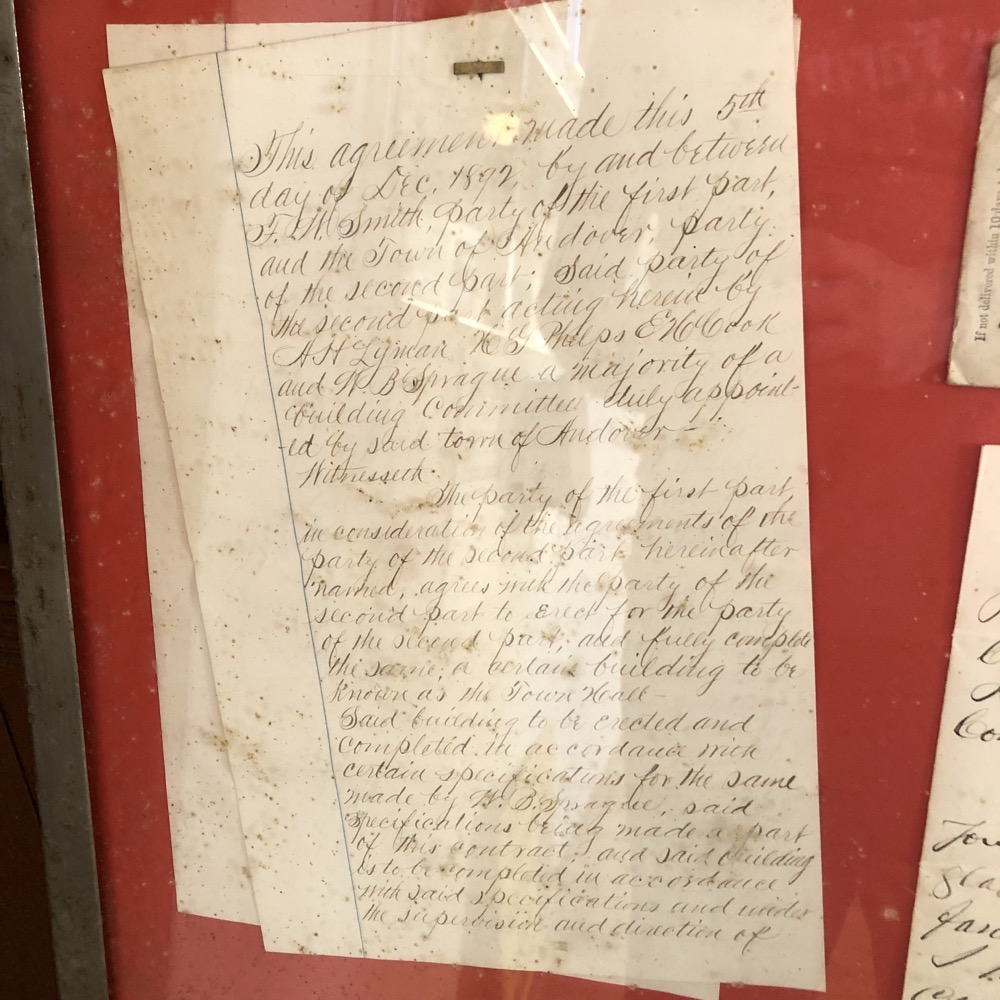 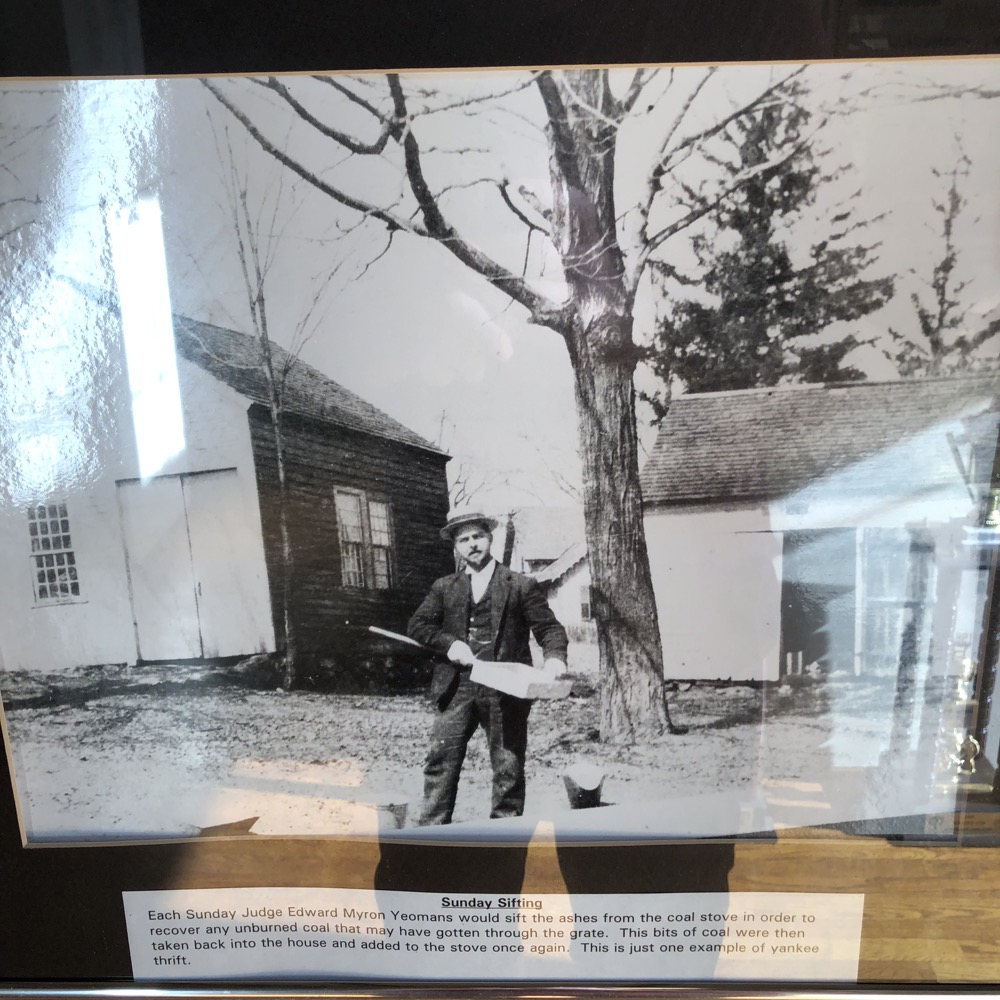 Who would ever think there would be border issues between places named Hebron and Lebanon?

The next 50 years were full of arguments about parishes and taxes and stuff. The road to the Andover parish was a rocky one, but they finally got their wish which… only led to a hundred more years of civic confusion. Who knew Andover was so plucky and controversial?

I did know that a train used to come through here at least. The Hartford, Providence and Fishkill Railroad Company ran regular train service between Hartford and Willimantic, via Andover – which now the aforementioned Hop River bike trail. I only mention this because in 1880, Andover’s railroad station was set afire by an ember from a passing engine and it spread to several nearby structures burning them to the ground as well. A contemporary diary entry of the day states that the entire village was nearly lost that day. The museum has a whole section devoted to the railroad and the various fires and derailments. It’s ghoulishly interesting. 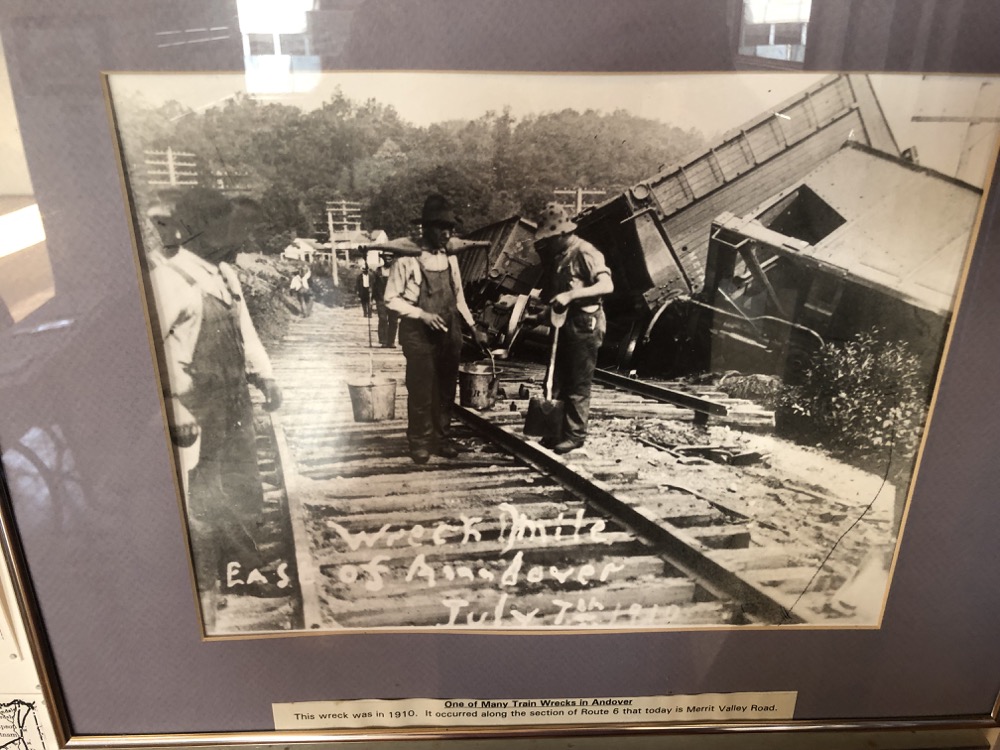 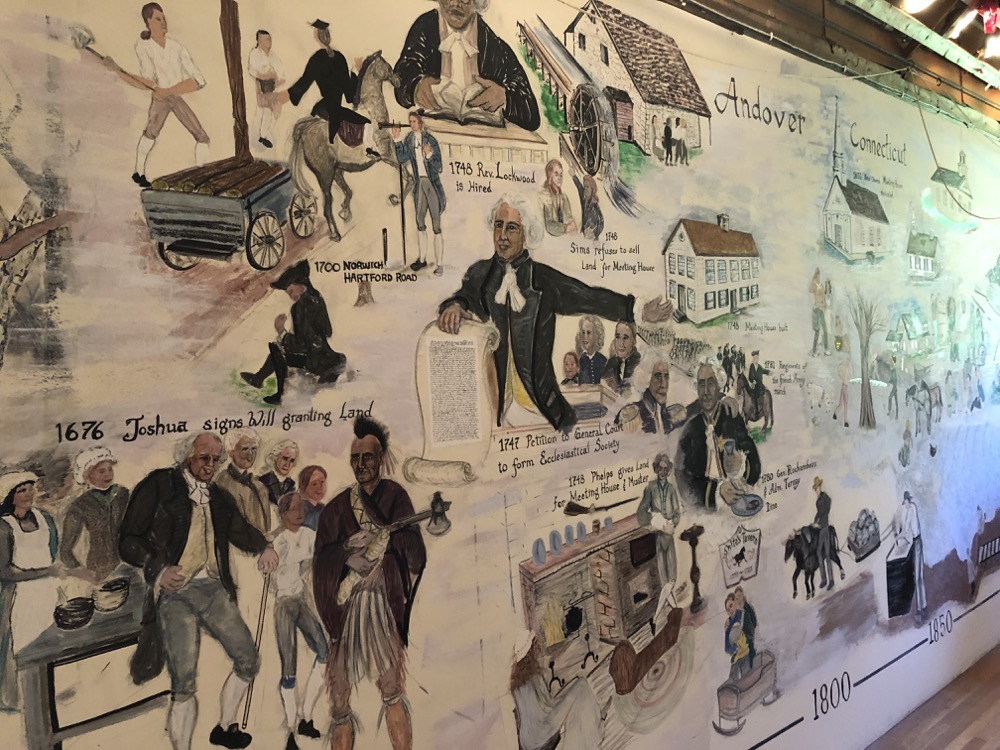 The train lasted until 1973, which is way longer than I would have thought. Anyway, here’s the craziest thing at this museum:

I didn’t take a picture because Scott was all up in my business at this point. He has school photos dating back to the dawn of photography (not really, but close enough). Fine, every historical society has that. But here, each kid is named. I remarked that I don’t often see that and Scott simply said, “my family has been here forever and several other families have been here forever and we just ask around and someone usually knows the name of every kid.” I was impressed, but had also showed my cards. “You’ve seen lots of school pictures from 100 years ago at lots of other small town history museums?” Scott didn’t actually ask.

I did take a picture of this lovely woman: 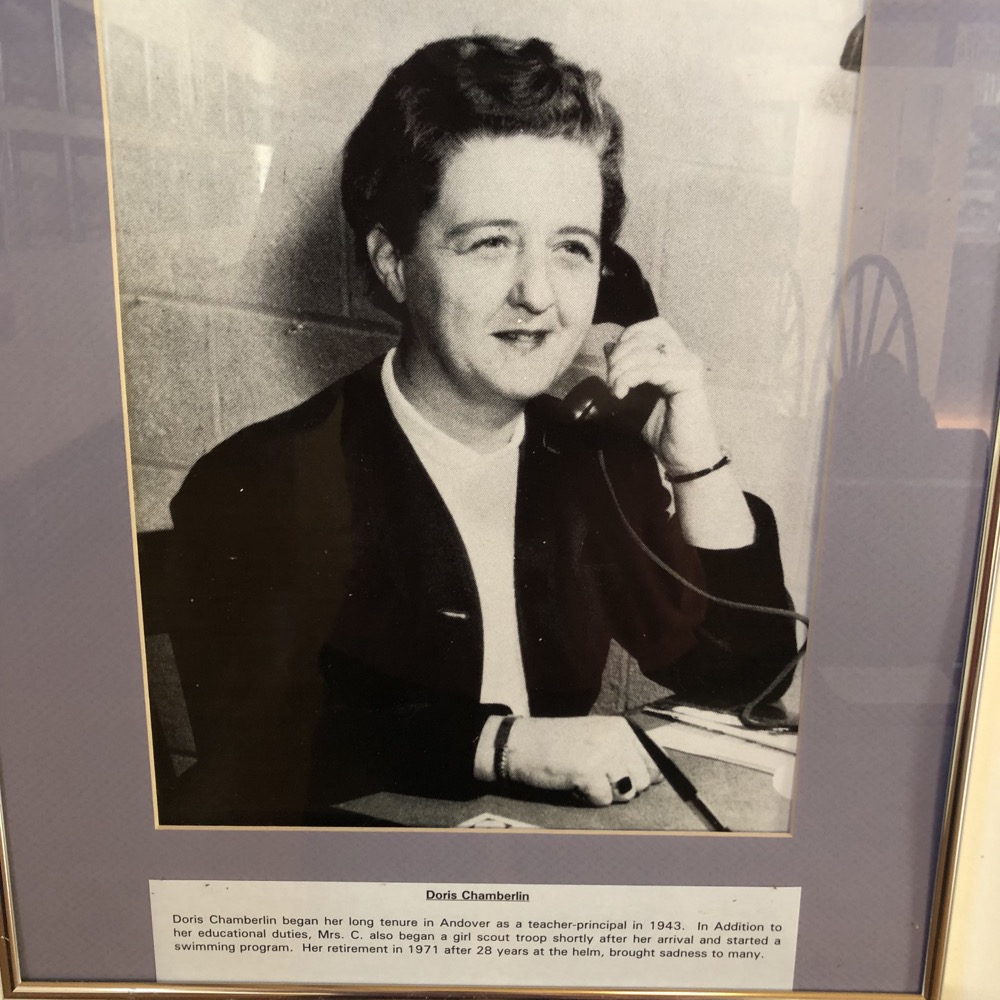 I enjoyed the time series photos of the dam building at Andover Lake and the slow progression of the water filling in. I enjoyed the small room with the huge “History of Andover” mural. And yes, in the end, I enjoyed poking around the “junk room.” There was nothing new to me as predicted, but I imagine the school kids who are forced to visit here always have fun with the old timey implements and such.

For the record, it’s far less “junky” than I often see. 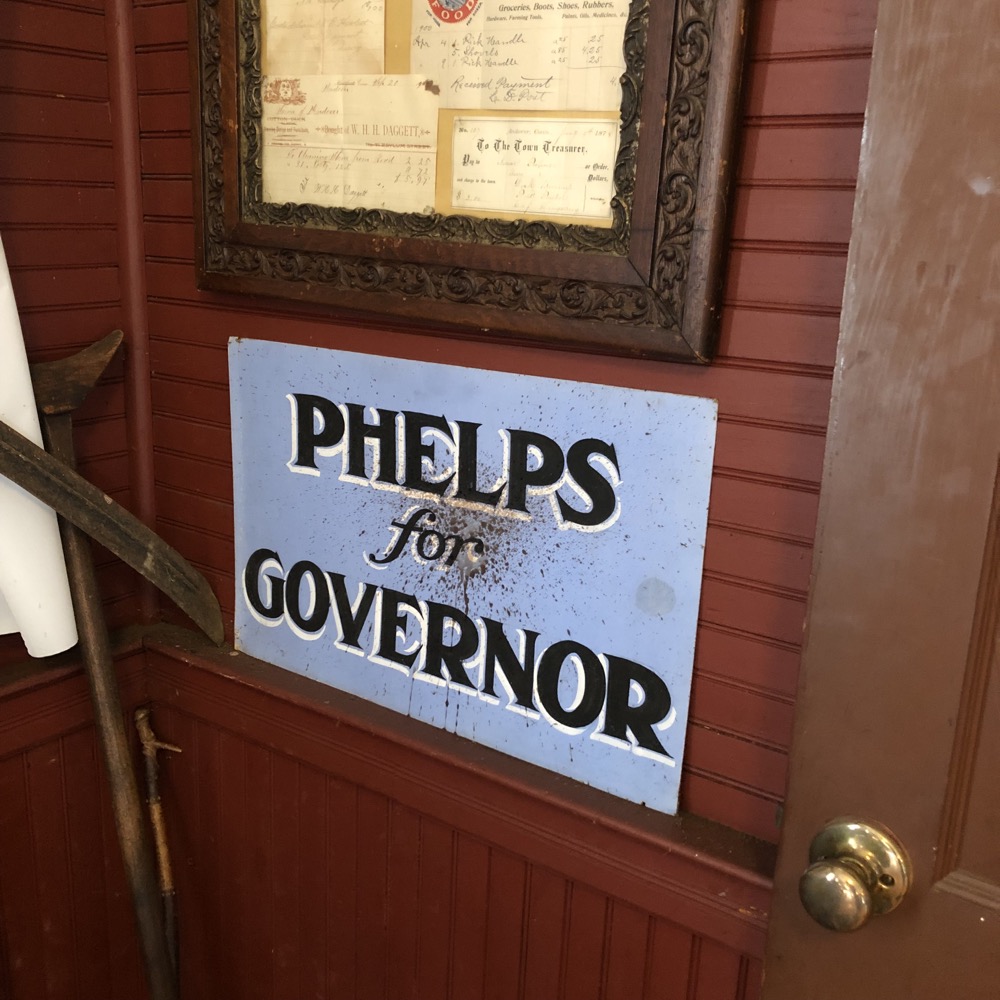 I have been to a lot of similar small town history museums. While the majority of them have more regular and accessible hours, many don’t. And many don’t have the ultimate town expert at the helm either. The Museum of Andover History has been sharing the town’s history with people since 1997. And before you scoff, during my visit, four other people wandered in. On purpose.

I wish Scott all the best and am happy to say that I’m a better person for having visited his museum. Yes. My hobby makes me a better person. I tell myself that when I look into the mirror over AndOv – okay. You get it. 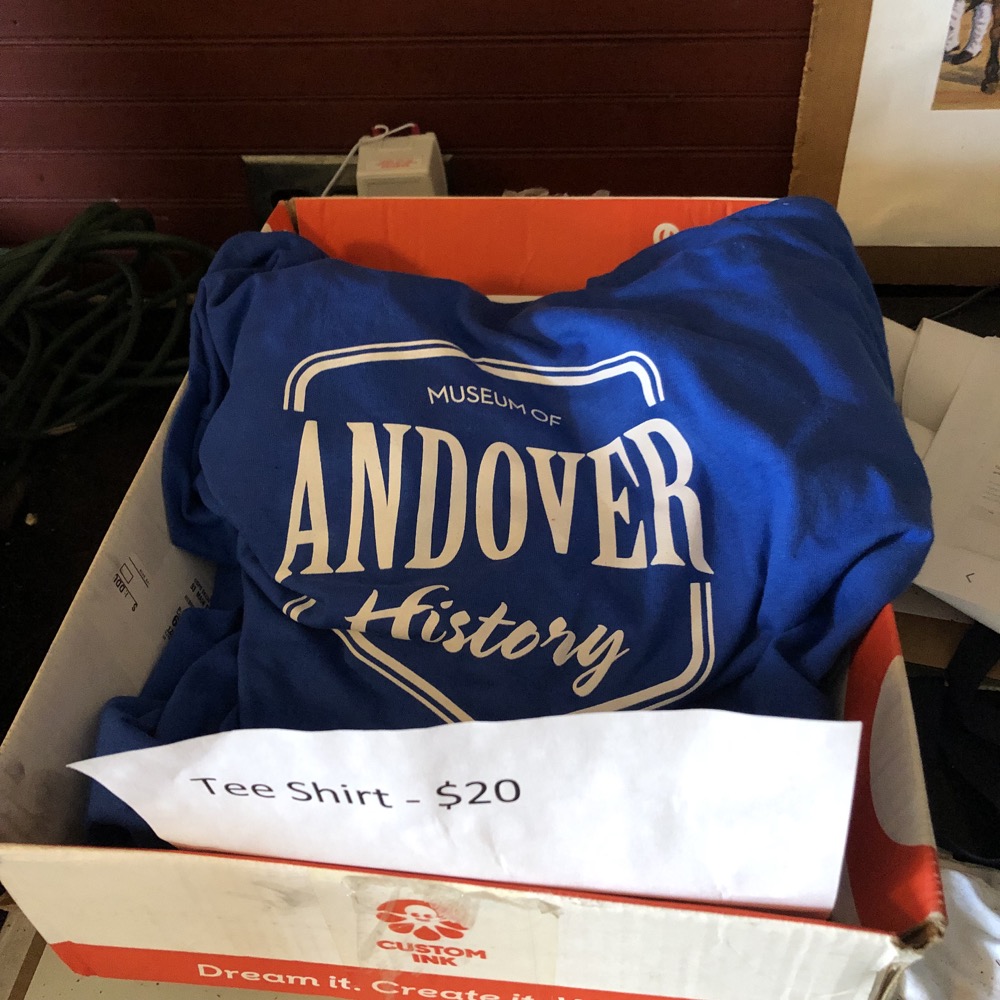 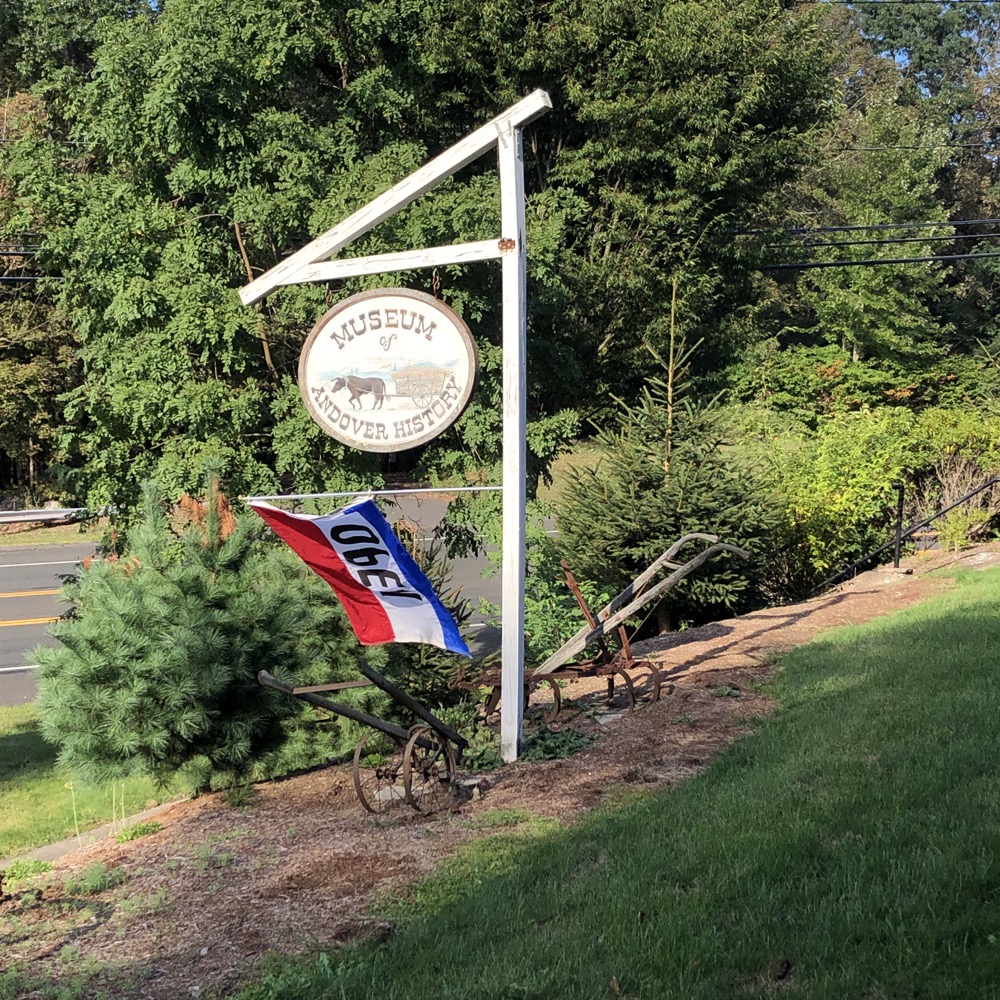