A rising tide lifts all boats.

We keep hearing that over and over with regards to the ballooning Connecticut brewery industry. And I happen to believe it’s true. The idea, of course, is that each brewery increases interest in the next brewery and vice-versa and so on down the line, resulting in more business for everyone. Middletown has two breweries and a cidery in the same building. Who’s only visiting one of those businesses when they go there? 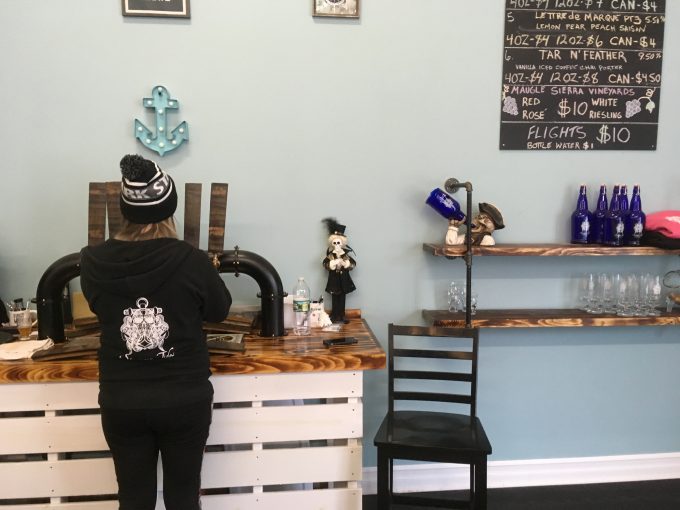 And Colchester currently has two breweries (Colchester!), which are both near other breweries in other nearby towns (Salem! East Hampton!). Aside from the DUI potentiality/eventuality, it usually makes sense to visit more than one on your beer-ventures. 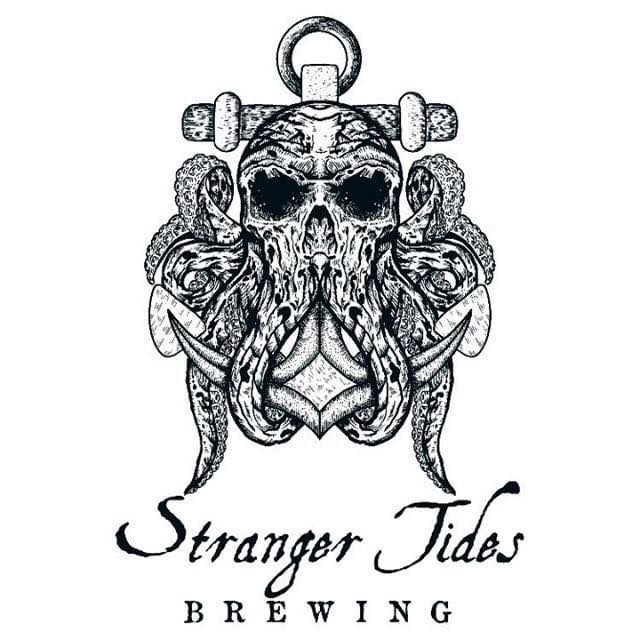 So what’s a brewery to do to stand out? Being excellent would be best. Being extraordinarily fun and funky and homey would be good too. For some, being “strange” might also work. As far as I’m concerned, if you’re going for the strange hook, you better be darn good at being strange. If not… you’re just strange for the sake of being strange. Or worse…

And that brings us to Stranger Tides Brewing, located in a strip mall in Colchester. A strip mall that houses The Photo Connection of Colchester right next door: “In our video department we do on-site 8mm and 16mm home movie transfers, as well as videotape to DVD conversions and DVD duplication.” That’s strange to me. Although a valuable service, is that a viable business model? I have no idea, but it’s cool to know I can get that stuff done there if I want. 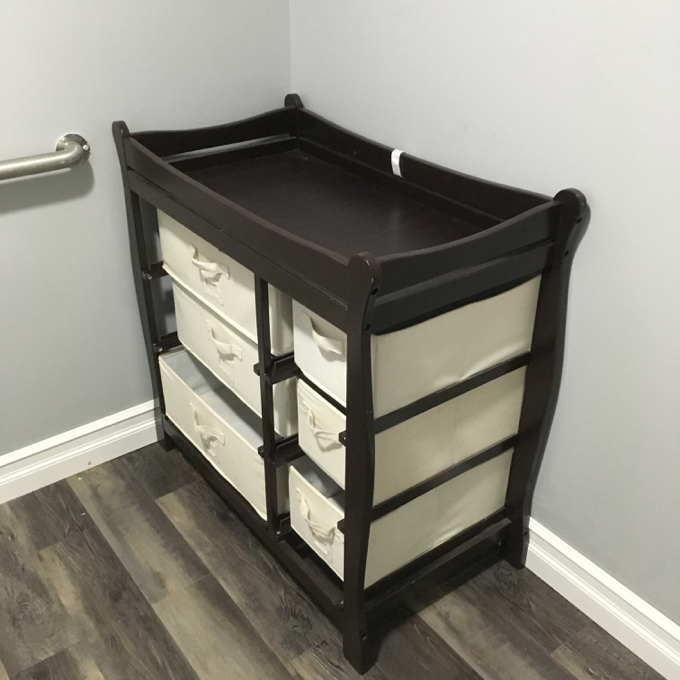 Nice, if a bit uncomfortable, baby changing station in the nice bathrooms

Stranger Tides is much larger inside than the storefront would portend. The space is made larger by the fact that the celling is twice as high as you’d expect. I think the space used to be part of the photo store somehow, and is now painted entirely of sea foam. It’s the color of a nursery. There’s a basement too, where the brewing is done. The (very nice) bathrooms are way down a back hallway. The seating during my visit consisted of a bunch of picnic tables and nothing else. This set up really struck a facebook reviewer as strange:

No place for a single person to hang out. Don’t want to take a whole picnic table and don’t want to stand. You need some tall tables or seats at the bar. Not very single friendly. We all don’t roam around with large groups of friends. Not a fan of picnic tables either. I want to relax and sit on something with a back.

Really dude? Just sit at the end of a dang picnic table. You’ll be fine. The brewery did respond to this person, noting that they were getting some other seating choices soon – so there may be some in place during your visit. There also may be tables outside now too.

I prepared to order up a flight of four beers and went to the seatless bar, set off “over there” like they do at corporate events or wedding receptions. Consulting my notes, I see that I was charged $16 plus tax. Which is certainly strange. I see on their board that a flight of four is ten bucks, but 4 ounce pours are $4 per. Did I get 4 ounce pours? I don’t remember and I honestly can’t tell from my pictures. I think I did? I guess I did, but I certainly don’t remember being asked what I wanted one way or another. Strange. 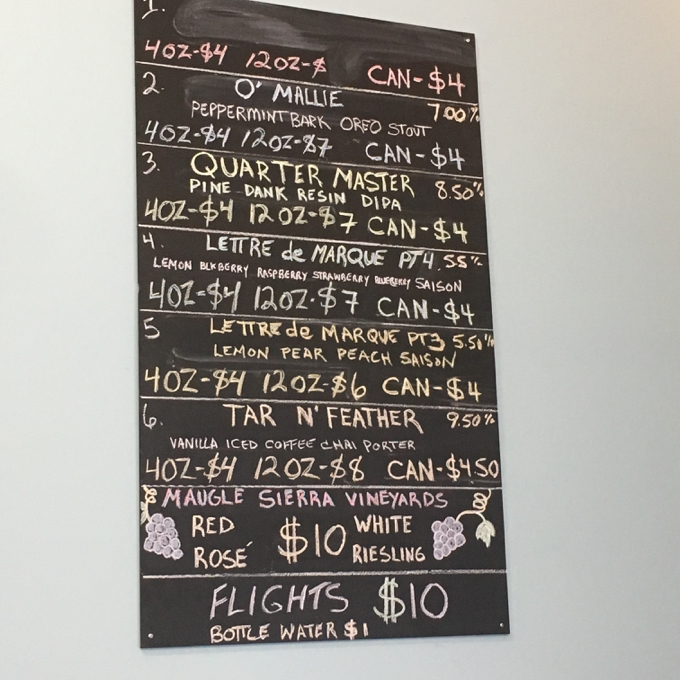 There were 5 beers on tap during my visit, and my first challenge was to decide which one to skip going off of which one sounded less appealing to me. An Oreo peppermint stout? A lemon blackberry raspberry strawberry blueberry saison?

I’m not making that last one up. I decided that the “Tar n’Feather,” a vanilla iced coffee chai porter, would be left untasted. I’m not sad about that. Stranger Tides says themselves, “we aim to push the boundaries on all styles of beer, but yet be completely delectable.” They’ve nailed the first bit at least. 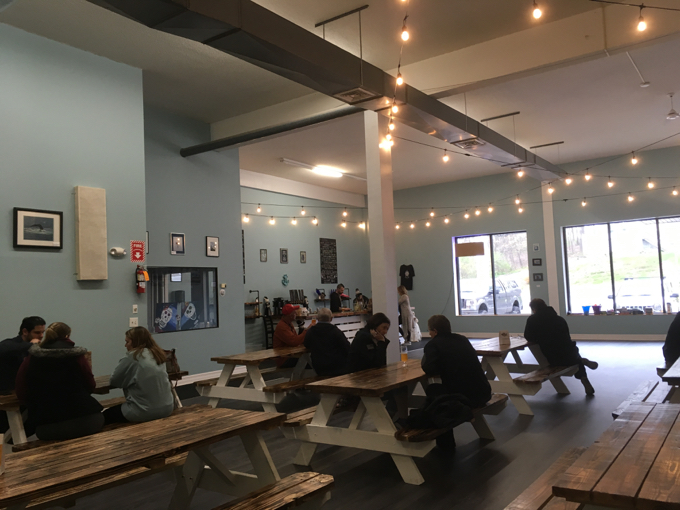 My flight came backwards, with the stout “first” and… not a problem. I was sober and could figure it out. Up first for me was the “Lettre de Marque Pt. 3,” your basic lemon pear peach saison.

A Letter of marque, by the way, was an official thing back in the day where countries allowed privateers to go and attack and capture any ship that their government was at war with. So you and I could get in our kayaks and go capture a North Korean ship if we had a letter of marque. Rad. The guy who runs and owns this brewery, Jeremy Struzik, has a bit of a pirate obsession. Especially Pirates of the Caribbean according to an interview I read.

His first go at this brewery thing was called Black Sails, but that was scuttled by either Black Sail Brewing in Indiana or one of the dozens who have similarly named beers. I think that was to be in Coventry, but then this space was found in Colchester and here we are with a new name and space. On the path to get here, a rather difficult Indiegogo project was launched ($1,363 of a $50,000 goal) but Jeremy pushed through and more or less did everything himself. Impressive to say the least.

I’m not just talking handyman stuff and brewery stuff. I mean… everything: 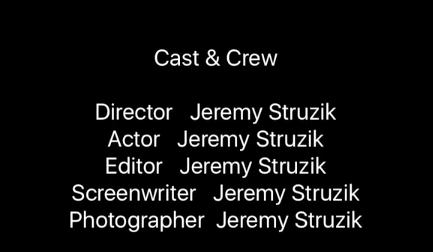 And today, he’s owner, manager, brewer, and pushes his brand on social media a bit. Oh yeah, this saison was pretty bad with a distinct household cleaner finish and certainly not a saison I need again.

On to the “Lettre de Marque Pt. 4,” the aforementioned lemon blackberry raspberry strawberry blueberry saison. This seems like a troll beer. Why the [redacted] does anyone need to make a beer like this? FIVE fruits. That’s just… ridiculous. And just seems so wasteful. And unnecessary. But… it actually tasted… not terrible. Perhaps the dark berries overpowered the lemony Lemon Pledge of the previous one? I don’t know, but I can’t really endorse this Frankenstein beer either. 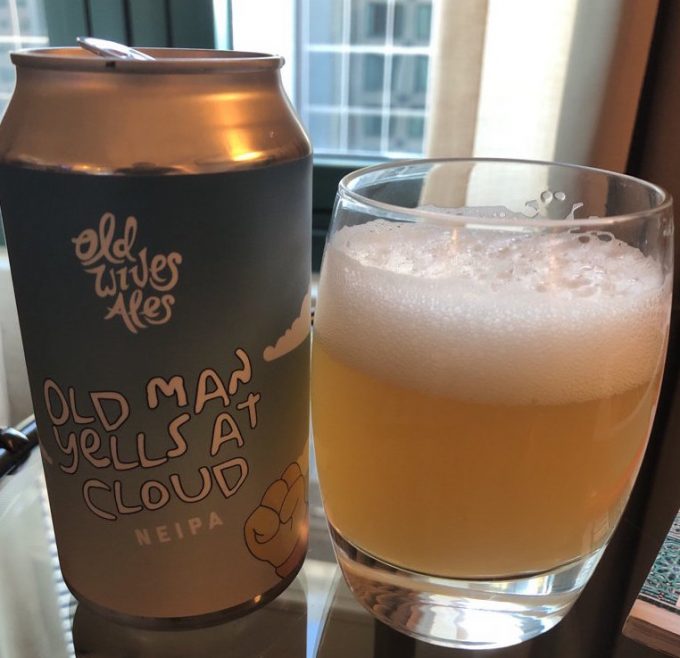 Ah yes, there IS a beer for me in this world.

I was going to move on, but I’m still stuck on “lemon blackberry raspberry strawberry blueberry.” Assuming all this is in this beer, this is so beyond unnecessarily expensive and messy and… for what? In a saison no less. Please know that I’m a cranky old man. I’ve been accused of being a curmudgeon. More than once I’ve been called a old man yelling at clouds.

Okay, finally, a beer beer. The “Quarter Master!” A “pine dank resin DIPA!” I licked my lips and rubbed my palms… 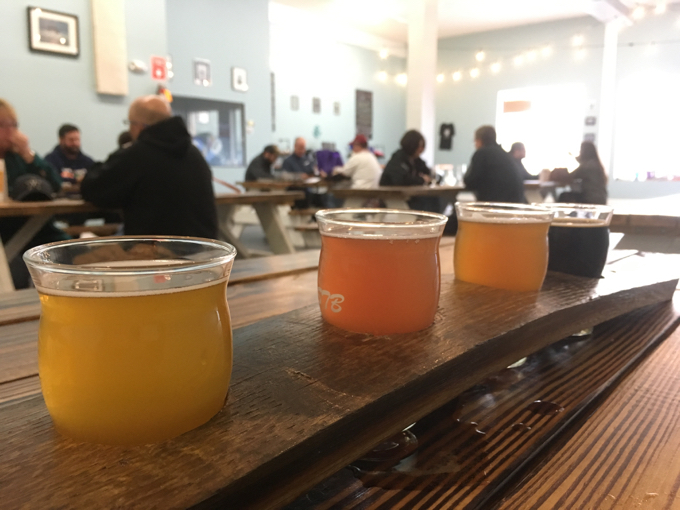 My notes from this one say, “WTF. Sweet. Phenolic. Lysol pine aftertaste.” Am I done here yet? This beer isn’t strange, it was just really bad. If one beer is cholophenolic, there’s a good chance they all are. One way to overcome that? Oreos and peppermints and boat loads of fruit purees. Maybe? I’m beginning to think Stranger Tides isn’t for me. Perhaps I’m the crazy person here. I’m no cicerone, I don’t brew, and… yeah. I went poking around to see if it’s just me and found a few others (a small minority) who weren’t too keen on the strange Stranger brews.

Then there was this I found: 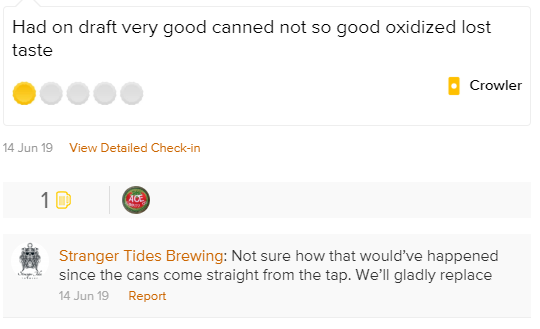 Again, I’m not a brewer or a chemist, but filling cans or crowlers at the tap could very well be the source of oxidation. Not that I regard random untapprs as arbiters of BCJP standards, but this one may possibly have a valid point. I don’t know if Stranger Tides does crowlers (which are generally poor vessels) or 16 ounce cans, but there are better, cleaner, more sanitary ways of filling aluminum.

The brewery responds to much of the criticism with variations on the same theme: “We don’t make regular beers.” Flashback to early Shebeen and the similar, “Some people get it, some don’t” line. Call me crazy, but I just want whatever it is you’re trying to do to be, y’know, drinkable. A straight-up old school piney resiny DIPA should remind me of, say, Gandhi-Bot or Torpedo or something. 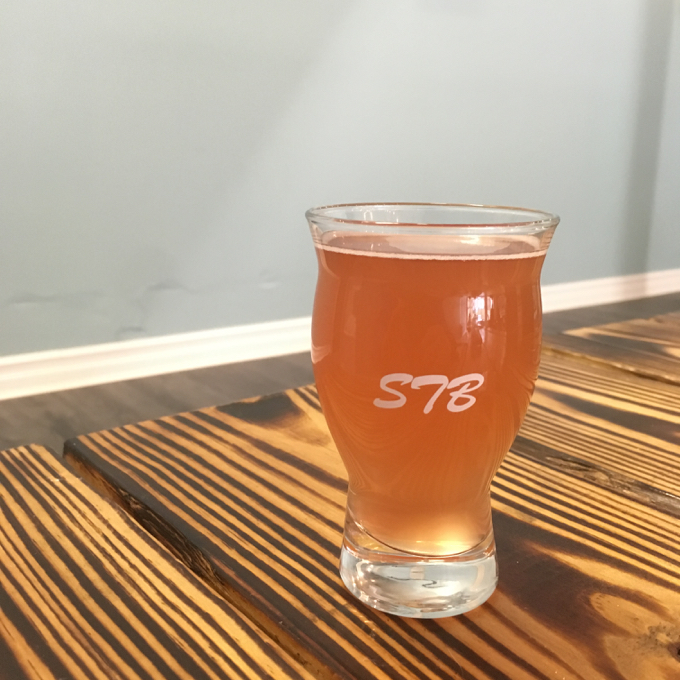 The Oreo mint or whatever stout I had at the end was the best beer of the bunch. Stouts are hard to screw up and even though I personally have no need for cookies and candy in my beer, there wasn’t too much of it here to make it undrinkable.

“We don’t make regular beers” doesn’t really make sense anymore. Mainstream breweries are making what would be considered “weird beer” just two years ago. The other local Connecticut brewery that tried this tact, Shebeen, gave it up to a large degree, became a “brewing collective,” and now cans a new hazy IPA every other week. I want Stranger Tides to be able to succeed doing what they want to do. 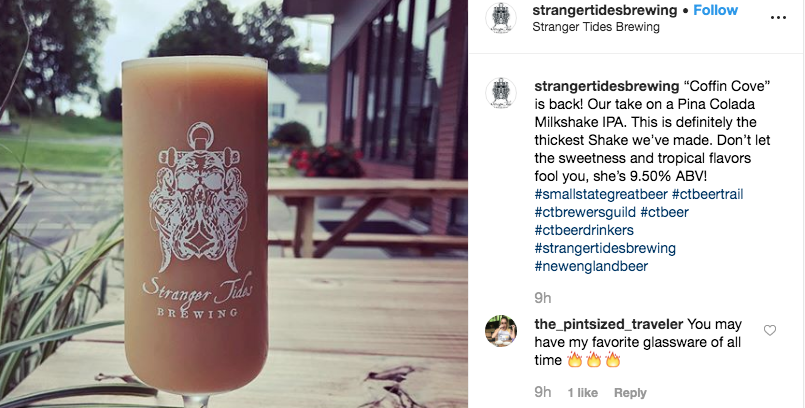 It’s the “our take” that gets me… as if there are other takes on this garbage.

Really, I do. I like a good saison and a like a good IPA but I’m not sure I’d ever get either here – and I think they may be okay with that for now? From what I understand, Stranger Tides brings in customers and a quick scan of rating sites tells me people dig it more than I’d have guessed. And as always, my one visit on one day cannot be held up as how this brewery is on all days all the time.

With one of the best breweries in the northeast just down to street in Salem (Fox Farm), and two others with fun and expansive outdoor settings nearby (Hop Culture Farms and Fat Orange Cat), Stranger Tides has their own niche. Time will tell if it’s a successful one. 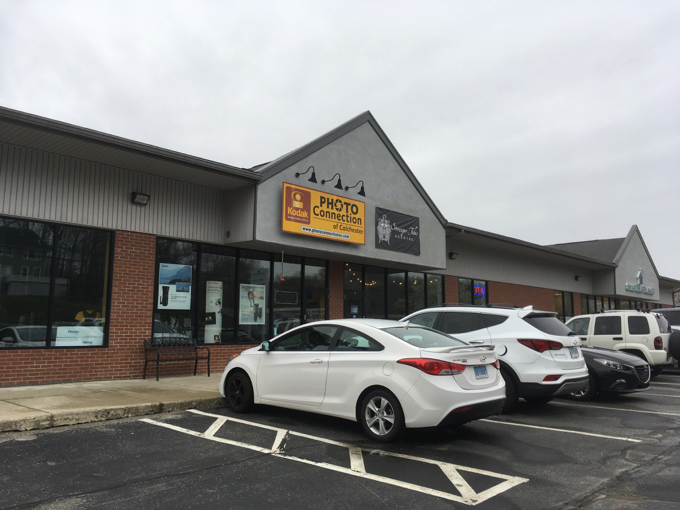