A Fine Museum is Looming…
Manchester (Google Maps Location)
May 28, 2009 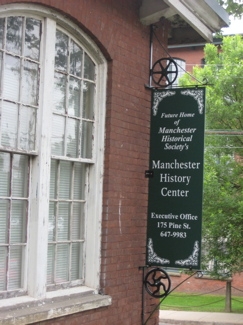 Perhaps inspired by the

Because really, what more can I learn about a giant loom than I don’t already know? I’m a huge loom fan.

Okay, you got me… That’s not true, but the Manchester History Center is open for visitors and very welcoming, so it qualifies. And if you’re reading this in, say, 2015 or later, then you may be in luck! The loom may be in working condition! Go check it out. 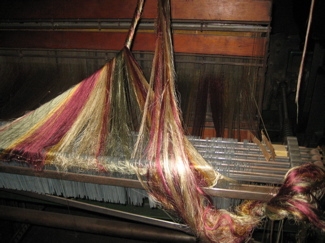 The web of Manchester history museums, all part of the Cheney Historic District (which is a National Historic Landmark, by the way), is slightly confusing – even to me. I’d already visited a museum called the Old Manchester Museum (visit here) and while that place certainly contains a lot about Manchester’s historic roots, the Manchester Historical Society also maintains the Manchester History Center. I’m not prepared to explain the distinction between the two places (which are only separated by a couple blocks), but they are distinctly different entities, though closely entwined.

Of course, it is necessary to include some repeat information about the rich history of Manchester – a town everybody knows but often overlooks when discussing major towns and cities in Connecticut. The area known as Manchester began its recorded history as the camping grounds of a small band of peaceful Indians – the Podunk tribe. English settlement began about 1673, some 40 years after Thomas Hooker led a group of Puritans from Massachusetts Bay Colony to found Hartford. This area was part of Hartford and was called “Five Mile Tract.” Later the area came to be called Orford Parish, and was part of East Hartford, which had separated from Hartford in 1783. 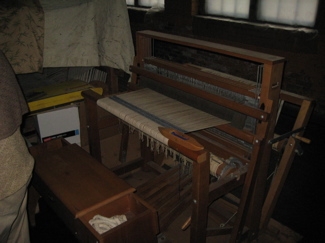 By 1890 Orford Parish had about 1,000 residents, clustered in small settlements such as Buckland on Tolland Turnpike, “the Center,” and “the Green” located on Middle Turnpike on the way to Bolton. There was a Congregational Church and a Methodist Church, 5 schools, 4 taverns, 5 saw and grist mills, an unsuccessful copper mine, woolen and cotton factories, and 3 paper mills. Some 70 men of Orford Parish had fought in the Revolution. Captain Richard Pitkin and his sons had produced gun powder for supply to the Continental Army. As a reward for this vital service, the new State of Connecticut granted to the Pitkins in 1783 a 25 year monopoly for the manufacture of glass. (CTMQ’s visit to the former site of the glass factory here) The Pitkin Glass Works manufactured bottles, flasks, and inkwells until about 1830 (Many can be seen at the future Connecticut Museum of Glass – CTMQ Visit here). Residents of Orford Parish began agitating for incorporation as a separate town as early as 1812. Their petitions were not successful until 1823, when Orford Parish was incorporated as the town of Manchester. 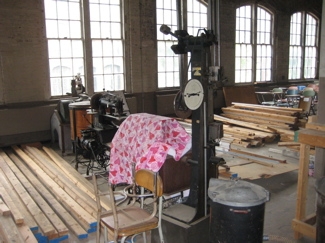 The Hockanum River and 6 brooks ran through Manchester in the early 1800s – providing a ready source of water power for manufacturing. Woolen mills were in operation on Hilliard St. from 1780 until the mid 20th century. When it closed in the 1940s, the Hilliard Company was the oldest family-owned, continuously operated factory in the U.S. The first successful cotton mill in Connecticut (begun in 1794) was taken over by the Union Manufacturing Co. in 1819. 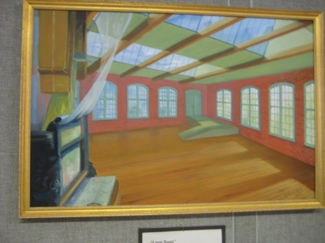 Cheney Brothers, founded in South Manchester in 1838, gradually became world famous for premium quality silk thread and fabrics – as well as for the invention of innovative silk processing techniques. While an employee of Cheney Brothers, young Christopher Spencer (inventor of the Spencer repeating rifle) won early fame as a mechanical genius by inventing a silk spooling machine. Cheney Brothers were renowned as well for their generosity and public spiritedness – building over the course of 50 years a “model community” of workers’ housing, schools, Cheney Hall, a public library, the Hall of Records, public utilities, and land for churches and parks.

Manchester became known as “Silktown” because of its famous silk mills, notably the immense Cheney Brothers Silk Manufacturing Co. in South Manchester. In the 19th, century the town could just as well have had the nickname “Papertown,” since there were 5 successful paper mills in operation: the Rogers Co. at several locations; Case Bros. at Highland Park; Adams Paper Mill in Buckland; Lydall & Foulds at Parker Village, and Oakland Paper Co. near the border of South Windsor. Everything from soap, needles, specialty carts, machinery to melodeons was made in Manchester. 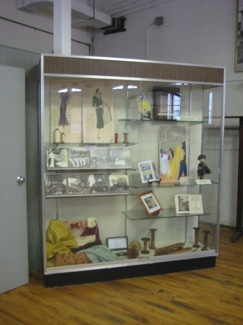 by 1900. Cheney Brothers employed about 25 percent of the residents. And that’s the company that really built Manchester and whose legacy lasts. Heck, I even lived in an old Cheney mill which was converted to loft apartments for a spell after college.

The historical society offers a map of a walking tour of the Cheney Historical District which I may just do someday, to fulfill the National Historic Landmarks list on this very blog. In a nutshell, many of the buildings still exist in one form or another. The Cheney brothers pretty much created a little city within Manchester with their own schools, fire department, and housing for their workers.

“Cheney Brothers was the world!” exclaimed a retired employee as he reflected upon his life in Manchester in the early 20th century. The number of immigrants who came to work at the mills was rather astounding for the age. But don’t pretend that this was some sort of factory utopia. There were several strikes for worker’s rights – none of which were successful until the mills finally became unionized during the Great Depression. 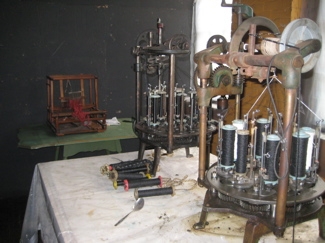 In 1902, some velvet weavers picketed because they were forced to work two looms rather than just one.

Ah yes, those looms… During the 1920’s, Cheney Brothers was the largest silk manufacturer in the world, taking thread from cocoons to finished material.

And it’s the looms that the History Center is focusing its attention on as it builds itself up into a museum. I found this hard to believe, but the looms on (sort-of) display here aren’t actually from here. They were purchased and donated from the Scalamadre silk company of Long Island. But these aren’t just any old looms – the looms here wove silk for every White House from the Kennedy to the Bush administrations and are similar to the looms that operated in the Cheney silk mills. 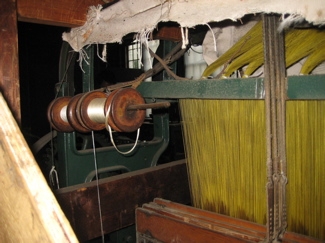 To get to the looms themselves requires a bit of walking. When Dan and I arrived and noticed there wasn’t much to the little welcoming room, I simply asked to see the loom. After some discussion and futzing around for some keys, we were led away by a curious woman who admittedly didn’t know too much about the looming looms. No matter… To the looms!

Holy crap, these buildings are huge. We were led through a massive room containing all sorts of stuff. Not all of it historic, but rather left over from various tag sales. Through another huge, nearly empty room with plenty of old Cheney Brothers equipment scattered about. Through another door, down some steps, through a locked door and then back through another cavernous empty old factory room. Old empty factories are pretty creepy; they are so huge and yet so empty 50 years after they cease to operate. 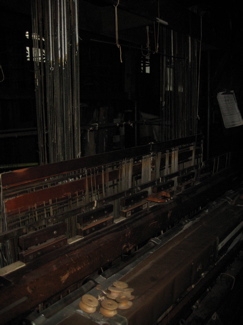 Finally, we entered another giant space and gazed upon the looms. They are big – very, very big.

There are two large Jacquard looms, a dobby loom, a narrow-fabric loom and other textile equipment here. The historic society is in the process of creating its Loom Exhibit. The exhibit will illustrate the significance of textile mills in New England’s history, the Cheney silk mills’ importance in this history both nationally and internationally, and the interrelation to other cultures’ textile history. This equipment will be the centerpiece of the exhibit. The exhibit will tell the story of Manchester’s mills and their relation to textile mills in our New England culture and history. The loom exhibit will include photographs, hands-on displays, and interpretive features.

I’m sure it will be a wonderful exhibit. After all, Manchester was known as “Silk City” back in the day and the story of how this little manufacturing center became so internationally renowned is a fascinating one. 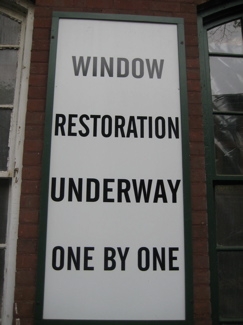 The looms “sort of work” was the way the woman put it to Dan and me. The process of restoring them looks terrifying and daunting to me. So many moving parts and such a seemingly complicated process of silk weaving. But the MHS is quite lucky to have scored these things. It turns out, after the company on Long Island shuttered and moved to South Carolina (and more importantly, to electronic looms), only three entities received looms: These guys, the American Textile Museum in Lowell, MA and the Smithsonian. That’s pretty darn cool.

These things are worth tens of thousands of dollars – though they could probably leave the place unlocked. It’s not like they are “stealable.” When completely put together and operational, one of the Jacquard looms will stand 14 feet tall, be 9 feet long and 6 feet deep.

Now, the article I got these last few paragraphs from said that the looms would be operational “within a year.” I have no idea when it was written, but it sure gives me hope that at least one of these monsters will be clanking and spitting out some nice silk garments relatively soon. 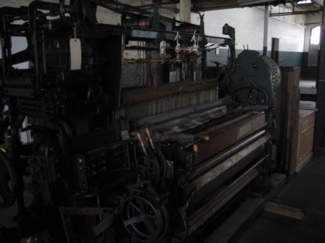