This museum is part of the Cheney Brothers National Historic Landmark.

My friend EdHill was up in Connecticut for a long weekend and proposed spending a full day with me. Hit up the bar and hang out? Nah. We headed out for a full day of CTMQ nonsense… up Routes 44 and 6 to Manchester and beyond to Coventry, Mansfield, and Windham. The weather was great, there’d be some guest appearances along the way, and time was a’tickin’. 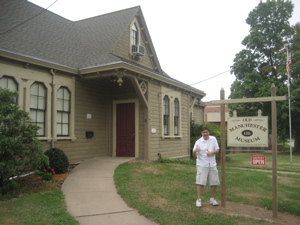 Up first: The Old Manchester Museum. While this certainly implies there’s a newer version somewhere in town, there is not. This was another celebratory museum of the town in which it stands. Having been to several town history museums, I already knew a thing or two about what to expect. Like, for example, there’s always part of an old post office for some reason: 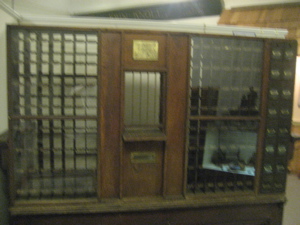 Ha! I knew it! But I digress – Manchester’s historical society has put together a great little museum and I will treat it with the respect it deserves. It’s not like this one will inexplicably have a baby doll randomly sitting in a corner too, like all the others seem to have for some reason… 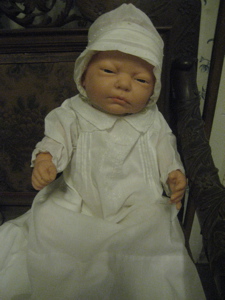 Darnit. Surely there is something to set Manchester’s museum apart from the rest, right? You better believe it! Manchester is one of the (many) towns I’ve lived in during my pre-marriage hobo-like existence (At one point, I lived in the dining room of a friends apartment in the complex known as The Mills. I mention this for a reason as you’ll read below.) Manchester, like all Connecticut towns, has its own unique history and flavor.

The museum building, for one, has its own rather convoluted history. At one time (from 1859-1914) the building (then known as Cheney School) rested on a hill a short ways away. It had two school rooms on either side of a central hall with the boys’ entrance on the right and the girls’ entrance on the left. 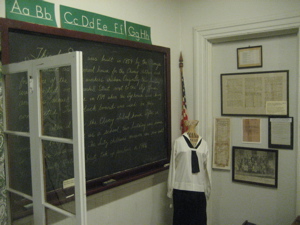 In 1914, the entire building was lifted up and moved onto new foundations to its present location to make room for Cheney Brothers’ new dye house. In its new location it had a varied history, being used at times for a day care center, storage building, paint shop, emergency three-level school with a kitchen/cafeteria in the basement, and a children’s museum. In 1985, after hundreds of hours of volunteer labor, it became the present day museum of local history.

“Cheney Brothers?” “Dye house?” Be patient – don’t you want to know how Manchester came to be Manchester first? Way back in the day, Manchester was the camping ground of the Podunk Indians. Then it was part of Hartford known as “Five Mile Tract” for some reason. Later, the area came to be called Orford Parish (the “or” was from “Windsor” and the “ford” from “Hartford”) and was officially part of East Hartford. Orford Parish had about 1000 residents around 1790. 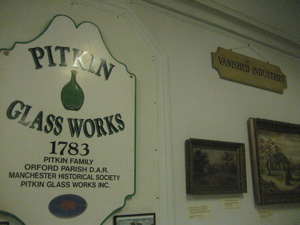 70 men from town fought in the Revolution and one particular resident, Captain Richard Pitkin (along with his sons), produced gun powder to supply the Continental Army. As a reward for this vital service, the new state of Connecticut granted the Pitkins a 25 year monopoly on the manufacture of glass. The Pitkin Glass Works made bottles, flasks, and inkwells until about 1830. Just before that, town residents got their wish of incorporation and became Manchester in 1823. 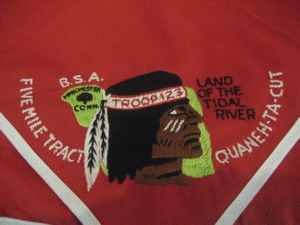 So that’s how Manchester came to be. Now what was it about the Cheneys and the mills and the dye house I’ve mentioned? Ah – now it gets good! Since 1780 there have been various mills operating in town. The Hockanum River provided the energy and Irish immigrants often supplied the workforce. One mill, the Hilliard Company’s woolen mill, operated from 1780 until the late 1940’s – at which time it was the oldest family-owned continuously operated factory in the United States. Yeah, I find that sort of hard to believe too. (The first successful cotton mill in CT was here in Manchester as well.)

Enter the Cheney brothers. (By the way, “Cheney” here is pronounced “Chee-nee” as was made abundantly clear to us a few times.) Their factory mills were founded in 1838 and gradually became world famous for premium quality silk thread and fabrics – as well as for the invention of innovative silk processing techniques. One employee, Christopher Spencer, not only invented a silk spooling machine, but also the Spencer repeating rifle which helped the North win the Civil War.) 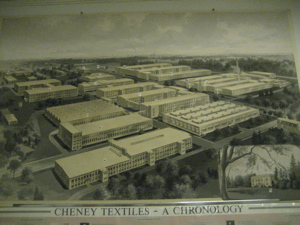 Cheney Brothers expanded and built a massive complex of factories right near where the Old Manchester Museum sits today; throughout their growth, they were renowned for their generosity – building over the course of 50 years a “model community” of workers’ housing as well as schools, Cheney Hall, a public library, churches, and public utilities. They even operated their own fire station – now known as the Cheney Fire Station Museum – our next stop. 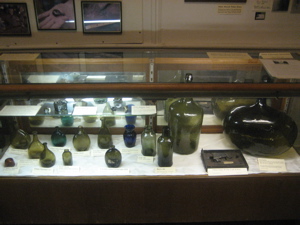 Today, the Cheney factories and mill buildings have almost all been converted to apartments and lofts. I can’t remember the name of the one in which I lived, but they all have names like Yarn Mill, Ribbon Mill, Silk Mill, etc. They are pretty neat, actually. And I’ll go on record here, on CTMQ, thanking Mark M. for the kindness he showed me in letting me squat in his dining room for several months when I was “finding my way.”

Note: I found it.

Phew! More than you wanted to know about Manchester? And you thought it was just Buckland Hills mall. Alas, it is not. While the Cheneys dominated the first century of Manchester history, other mills proved successful as well – notably the more mysterious Case Brothers on the north side of town. I think there was probably a pretty healthy rivalry between the two families and since the Cheney’s are the ones with the museum(s), I’ll stick with them. (Though the Cases have a mountain and a nice park so that’s pretty impressive.) 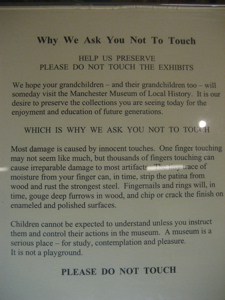 Perhaps the most forceful wording to kids encountered thus far

The museum itself is divided up into “corners” with the Schoolhouse corner being the first encountered. Ed and I enjoyed the old map where the borders of the early US are not very accurate and the land west of Kentucky is just an amorphous blob.

Moving on, we came to the very nice silk mills display. It explained how silk is harvested and then woven into the fabrics that Cheney Bros became so famous for. There was a Jacquard weaving loom and an example of the complex patterns that were made in Manchester. In many respects the Jacquard loom was a precursor to later machines that were more adept than humans at repetitive tasks, ultimately leading to the modern computer. The Jacquard loom itself does not compute, however the (human controlled) punch cards mean the information to make a given tapestry is “stored” in the punch cards, allowing the same loom, and the same human weaver, the opportunity to weave any tapestry. More importantly it took weaving from the domain of expensive experts to the world of mass production, at least by the standards of the 19th century. 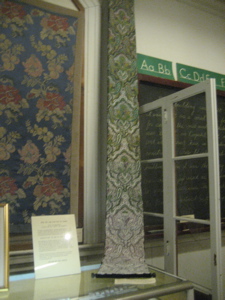 The Society houses one of these massive looms a few blocks away at the Manchester History Center.

The length of fabric seen above was actually very pretty in real life. The subtlety of color changes was most impressive. I got a C in home economics in 7th grade, so what do I know? I know that Pitkin Glass was another Manchester company which produced rather impressive products. The museum had a decent collection of massive jugs as well as teensy little medicine jars with intricate details. The factory today only exists as a stone foundation a few miles away.

Next was a display of some other local businesses – like Bon Ami soap. Bon Ami has been around in Manchester since about 1886. It is somewhat famous for the yellow chick on the label, and its companion slogan “Hasn’t Scratched Yet!” has become a textbook example of early American trademarks, but few people now remember the facts behind the cute chick’s relation to Bon Ami. A newly hatched chick will not scratch the ground for food for two or three days after it comes out of the shell because it is still living off the nutrients of the yolk. As neither chicks nor Bon Ami scratch, the chick is an appropriate symbol with the trademarked slogan “Hasn’t Scratched Yet.”

Another business celebrated here is good ol’ Shady Glen Dairy Stores and its famous burgers. The whole Shady Glen story is spelled out but what’s cooler is the original – and working – Seeburg Jukebox which used to be at Shady Glen several decades ago. Behind us was a giant portrait of Ethel Donaghue who donated $50,000 to fund the museum. Ed quipped to our docent, “What did that painting cost, $50,000?” 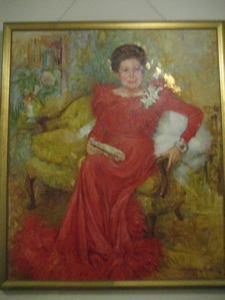 Don’t tell her, but that’s the dress I bought my wife for her birthday!

We then passed through the Victoriana: toys, games, dolls, and dresses area that never seems to interest me all that much. There was a cool little 3D viewfinder thing with a picture of, I think, a factory loaded into it. Ed stared into it for a good 15 minutes, googly-eyed. Next was a display about James Olcott, “The Grassman.” Manchesterian Olcott was a leading pioneer in grass-culture and even helped found UCONN’s School of Agriculture in 1881.

The next room contained the Manchester Sports Hall of Fame. This was not large. Next up was the room with changing galleries. It was in transition a bit from honoring Manchester’s war veterans to a Boy Scouts exhibit. There were tons of old pictures of the town, old maps, and war memorabilia. There was the offensively named, “Jap Map” for grade school kids to learn about Pacific islands. Then there was the town band shell model from 1977. Like people, let’s just say 30 year old models are well past their prime. 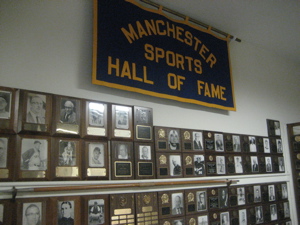 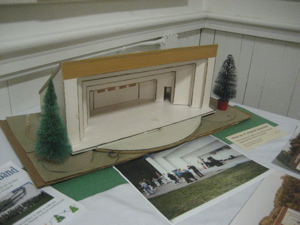 Let’s be fair; it’s a shell of it’s former self.

Above I mentioned the Spencer repeating rifle – Christopher Spencer invented it and even had an audience with President Lincoln at one point. He demonstrated his rifle’s capabilities with a couple witnesses down in DC near where the Washington Monument now stands. Imagine me inventing a gun and good ol’ President Bush and I go off to shoot alone in this day and age? At least he’d trust me more than, oh I don’t know, his VP who shot an old man in the face and made him apologize for it. But that’s just a hunch. 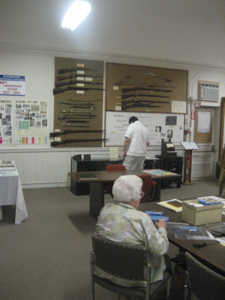 One last stop – The Milton K Adams Gallery. Adams was a Manchester author, mainly of children’s books so it’s almost expected that he’d be honored here at the museum. The first pieces of art from his books were rather small: 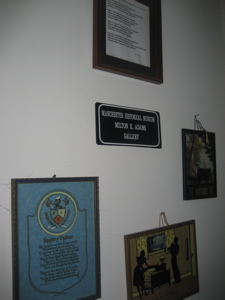 But stepping around the corner, a full breadth of his works were seen: 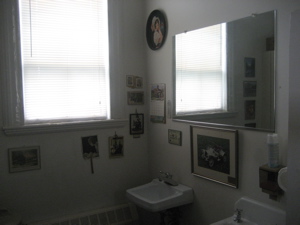 Just be sure to bring the Febreeze with you when checking it out. Yes folks, the esteemed Milton K. Adams is honored in the bathroom of the Old Manchester Museum. I’m sure his family is proud. And no, I’m not kidding. I never kid about bathroom exhibit halls. (see the comments below to confirm that his family is indeed proud.)

We thanked our kind and wonderful tour guide, donated a few bucks, and continued on up the road with our packed CTMQ day. 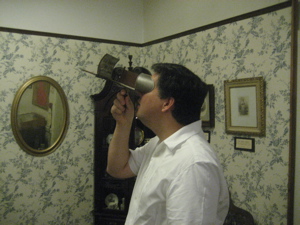