I have split the Case Mountain Trail network into northern and southern sections.

If you’re not familiar with the large tract of woods at the corners of Manchester, Glastonbury, and Hebron, let me be the first to tell you that it can be very confusing. There are tons of trails – all sorts of trails. Mountain bike single track, legitimate blazed trails, legitimate unblazed trails, logging roads, supposedly permit-only water company trails, state park access trails, and yes, the CFPA’s Shenipsit Trail. 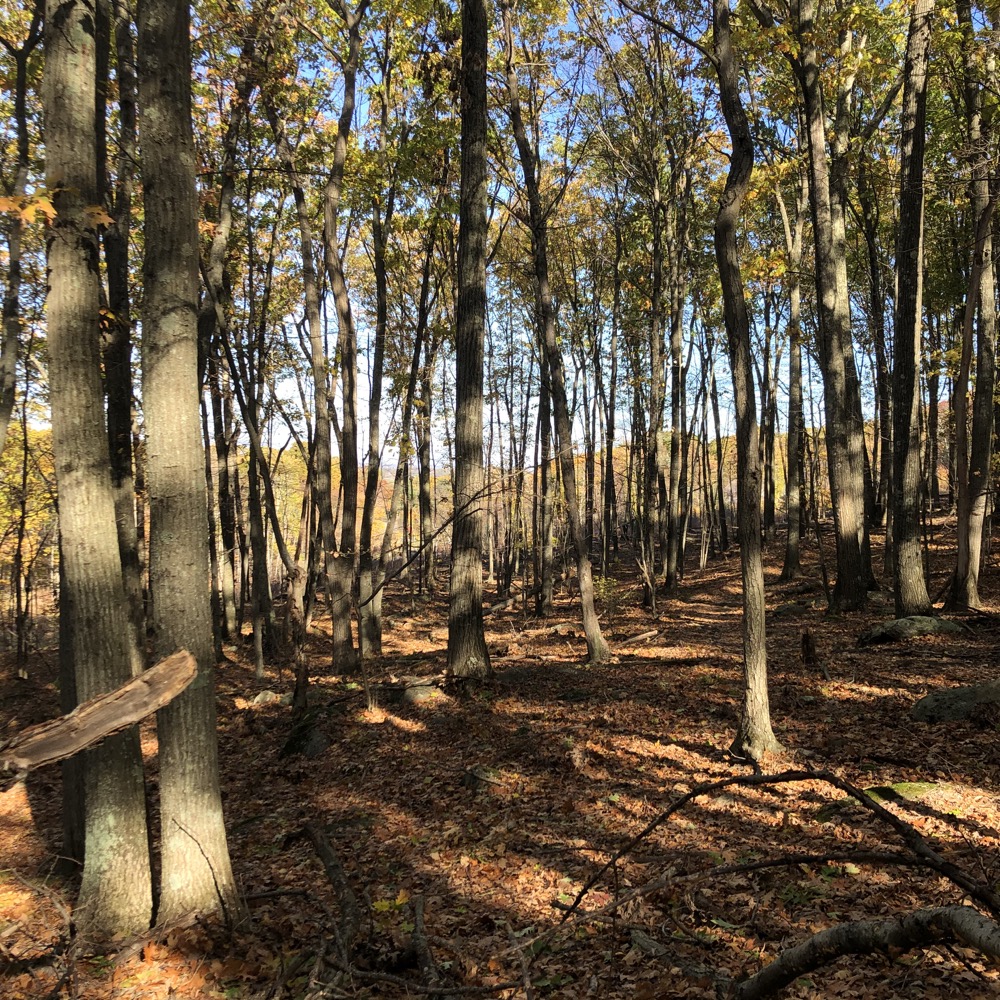 It is very easy to get turned around in the woods in this area, and the maps that exist don’t really help as much as you’d hope. Sound like fun? You bet.

Case Mountain Recreation Area in Manchester is mostly known for Lookout Mountain. The vast majority of visitors and hikers start from one of the official lots and make the trek to the top for the famous view of Hartford. (The actual Case Mountain is an unheralded hill with no views at all.) But the trails from the property extend south and west from those hills to the Glastonbury border and beyond. 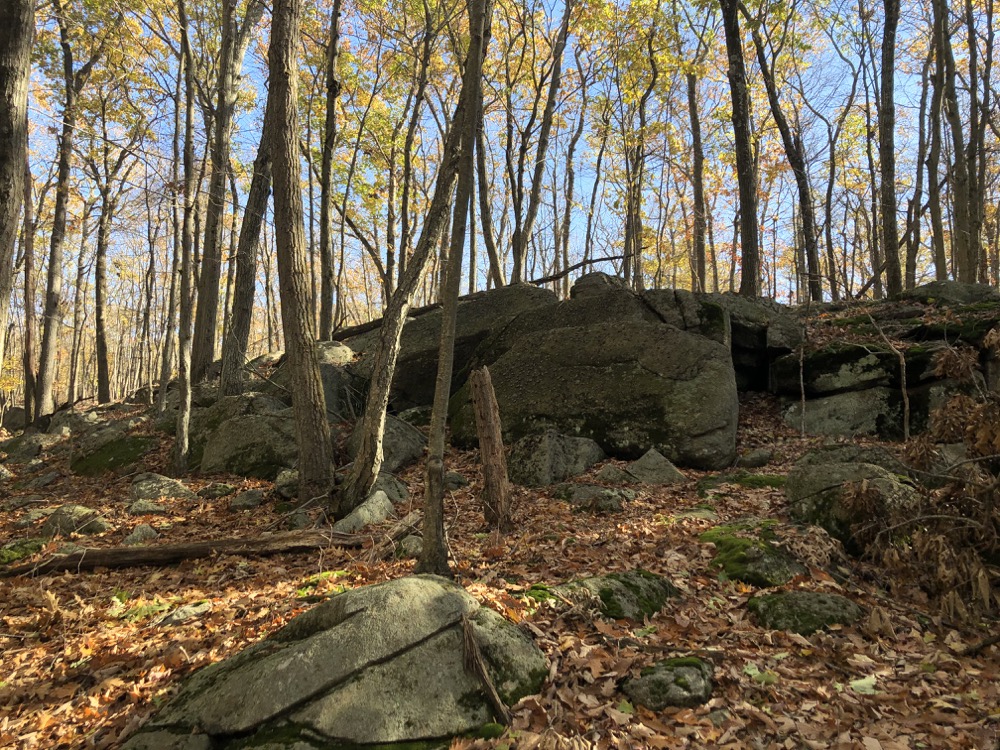 These are mountain biking hotspots and are a bit of a rogue (but safe) area. I accessed it from the lot on Line Street which straddles the town border. From here, heading north, there are trails that are part of the Globe Hollow trail network that sort of surround the Manchester Country Club and will get you to the Taylor and Globe Hollow Reservoirs – and ultimately over to the Nike Site Recreation Area of you’re so inclined. 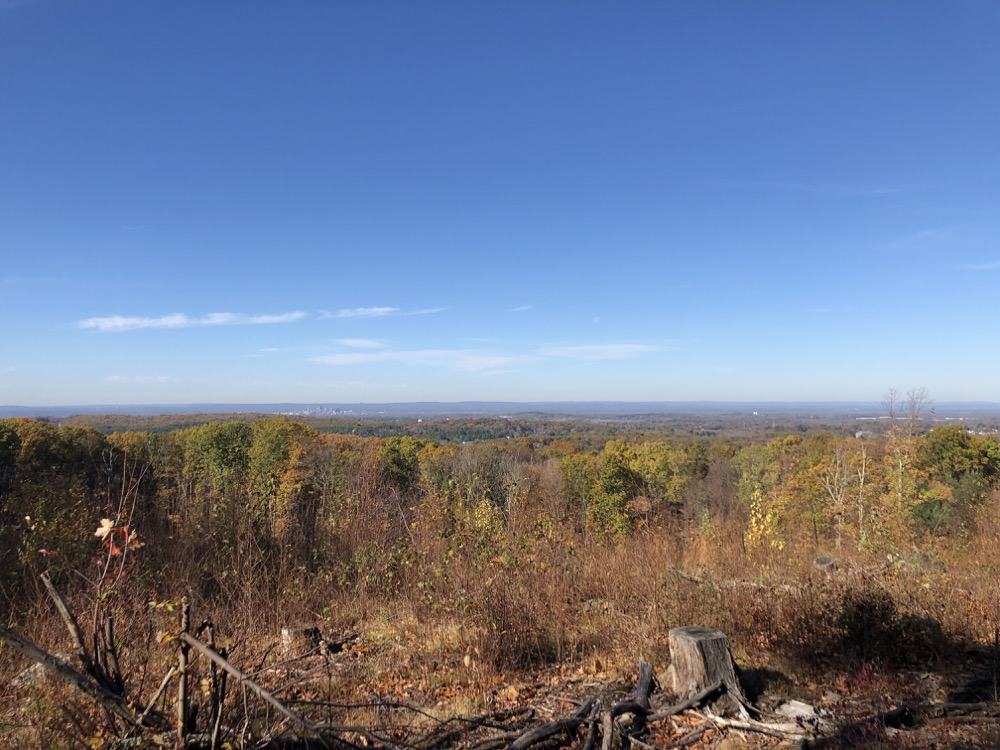 I’d done those trails years ago. On this day, I crossed Line Street via the yellow/red blazed “Girl Scout Trail.” (The GSA’s Camp Merrie-Wood is nearby.) This trail was to take me up the hills towards Case Mountain’s more popular areas.

The trail is blazed… until it isn’t. With open November woods, it was easy enough to keep my bearings, even through the hillside areas that are apparently slated for development. 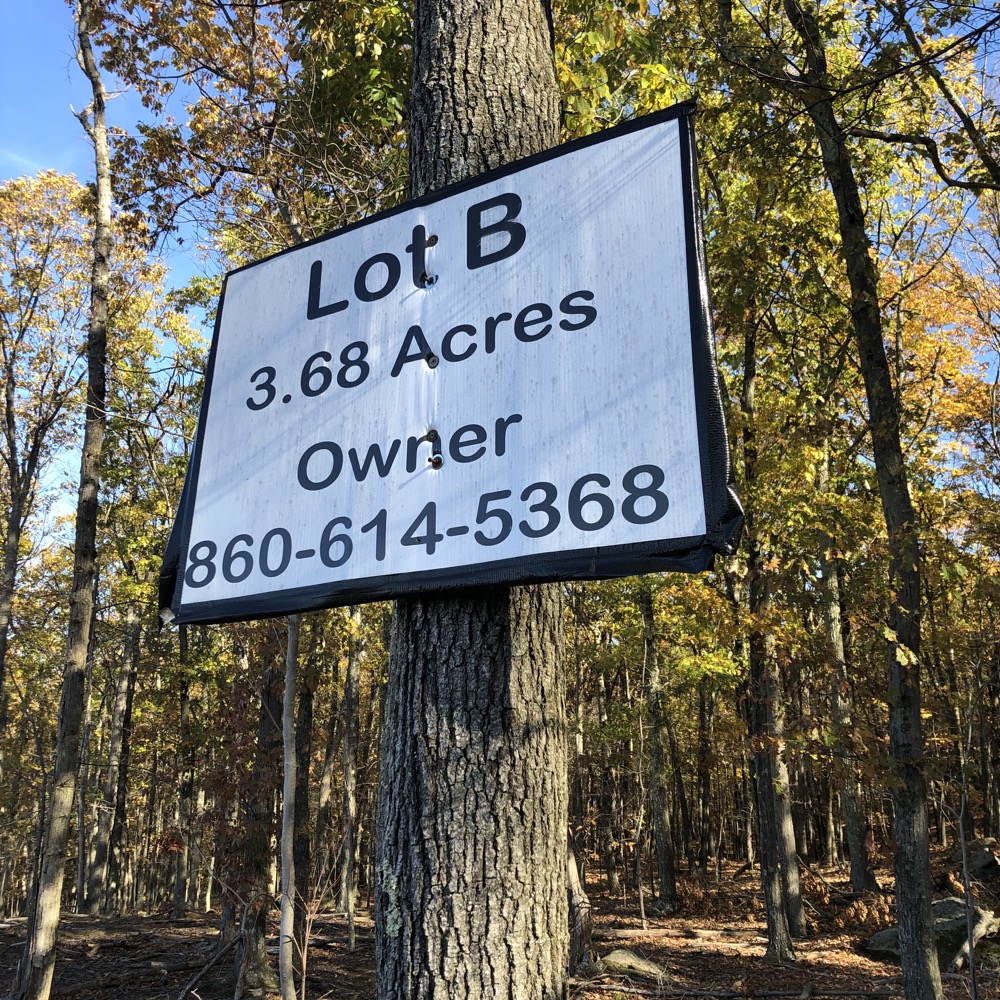 These lots are pretty far up the hill, but I suppose they’d make for nice homes – if that is indeed the plan here. I have no idea how long the lots have been for sale and I have no idea how attractive the sloped lots are for people, but I do know that the Girl Scout Trail will have to be pushed further east if they are sold. (And it’s kind of weird that the sign above is just out there in the middle of the woods.)

The land here seems to be sort of netherland. This is south of Case Mountain proper property, and north of the water company land. So I guess it’s just “Manchester woods.” As for any re-routing, that won’t be a problem because there are plenty of unofficial trails in these woods. So many that I lost the blazes and just sort of wound up walking along various random trails. 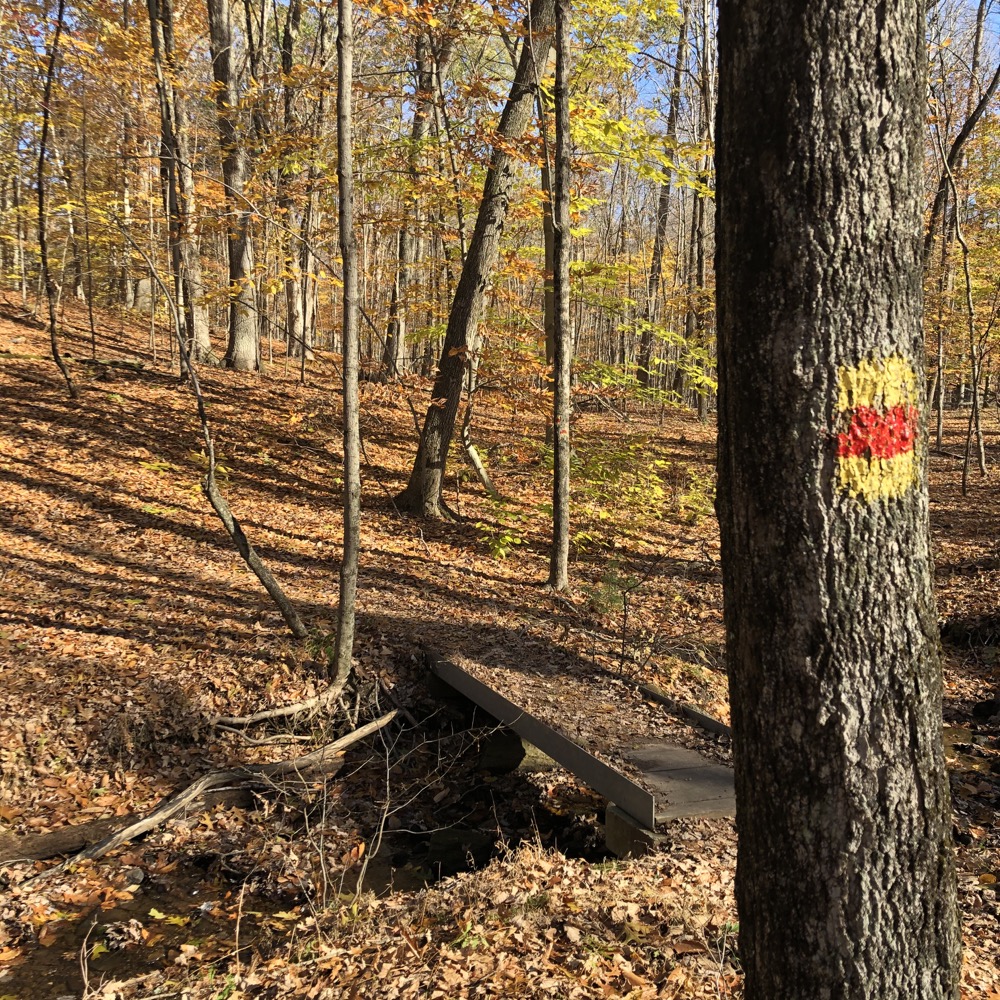 My goal was to find the gray/white blazed trail somewhere near the crest of the unnamed hill and the old chimney on it. I was a bit surprised when that trail just wasn’t appearing for me, and instead I found some unexpected valleys and wet areas. I forged ahead, generally heading north.

At some point I noticed the Girl Scout Trail blazes again and finally the blue/gray blazes I’d been looking for. There was a sign pointing north towards Case Mountain, but I’d walked those trails more than a decade prior. Instead, I headed south and found the chimney. 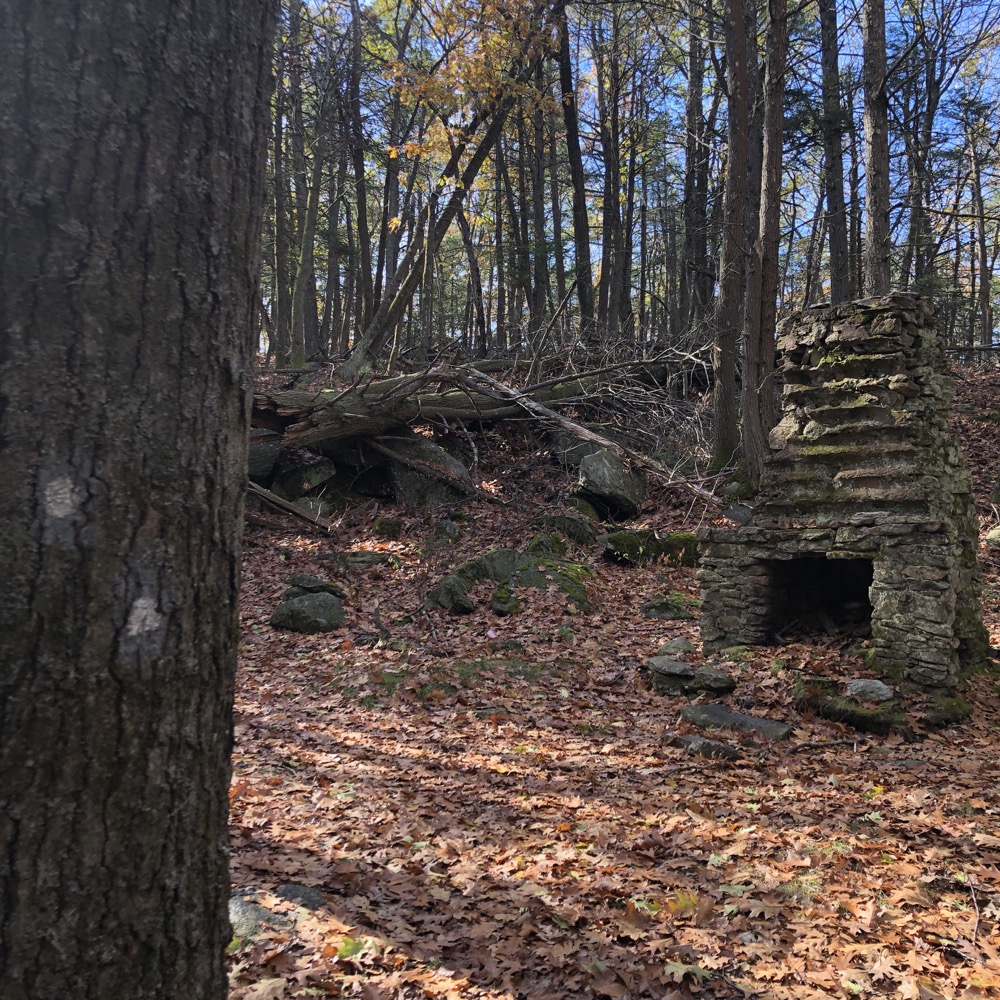 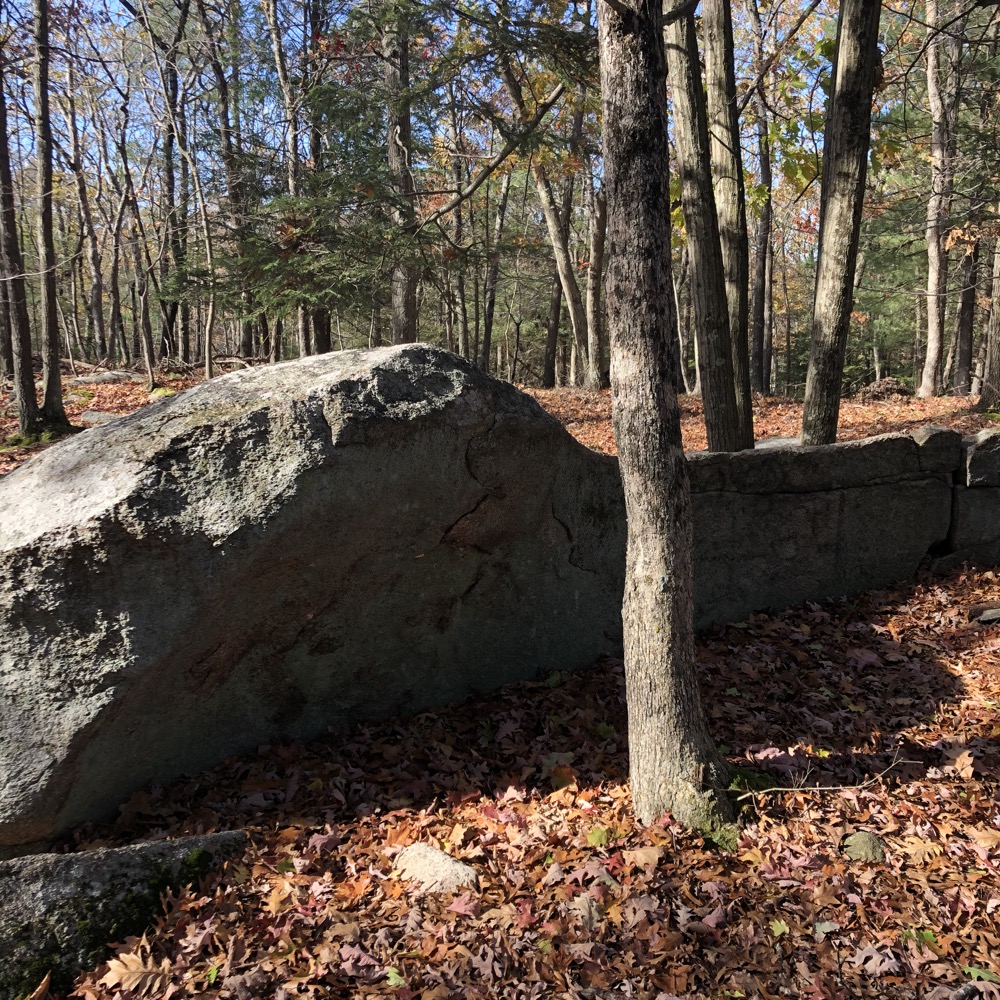 It’s a cool chimney. I was sort of annoyed by the extra walking I had done, so I took a moment to rest and to refocus on staying focused. To my east, the Shenipsit paralleled the trail I was going to take, so if I lost the trail again, I’d just bushwhack over to that.

I never had to though, as the blue/gray trail was fairly well marked and cleared and took me around a large glacial erratic and then linked up with the Girl Scout Trail section I’d lost earlier. From that point, it was easy to follow back south down the hill to an old quarry site. I have no idea how I lost this trail in the first place, but I didn’t dwell on it too much. 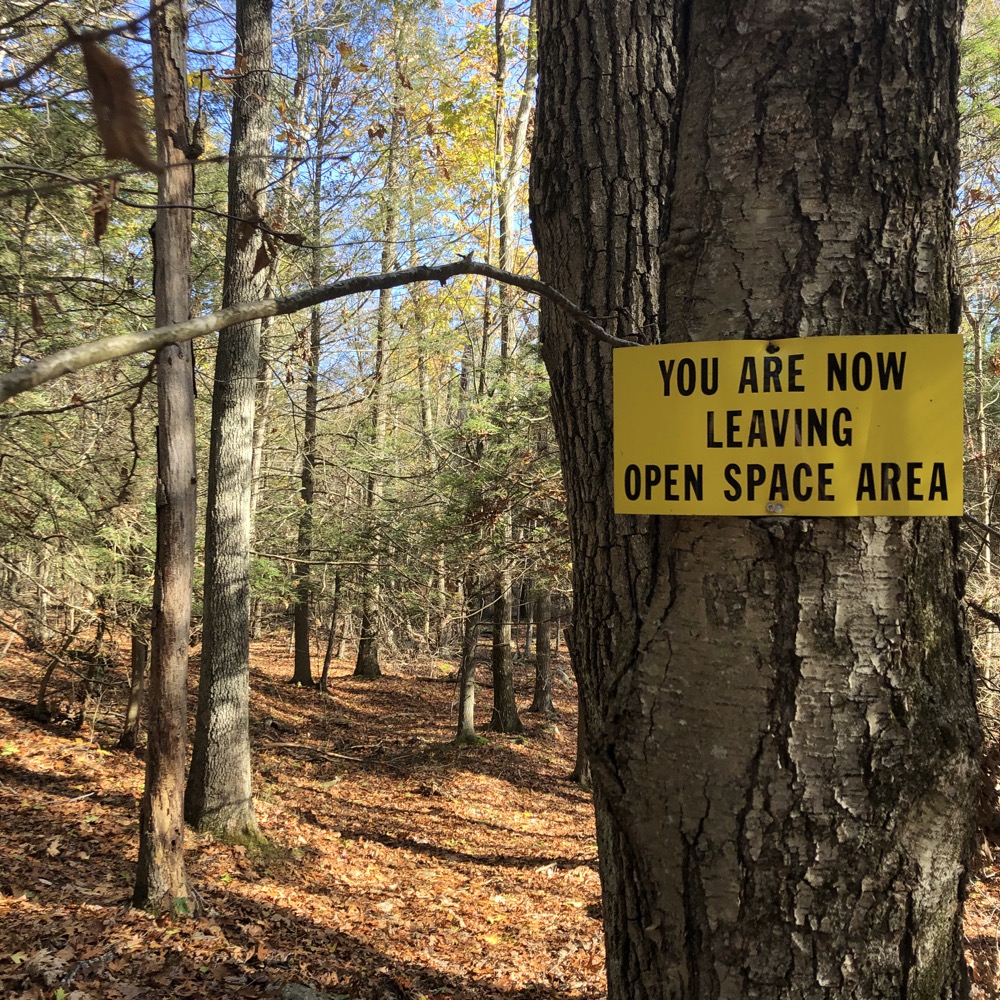 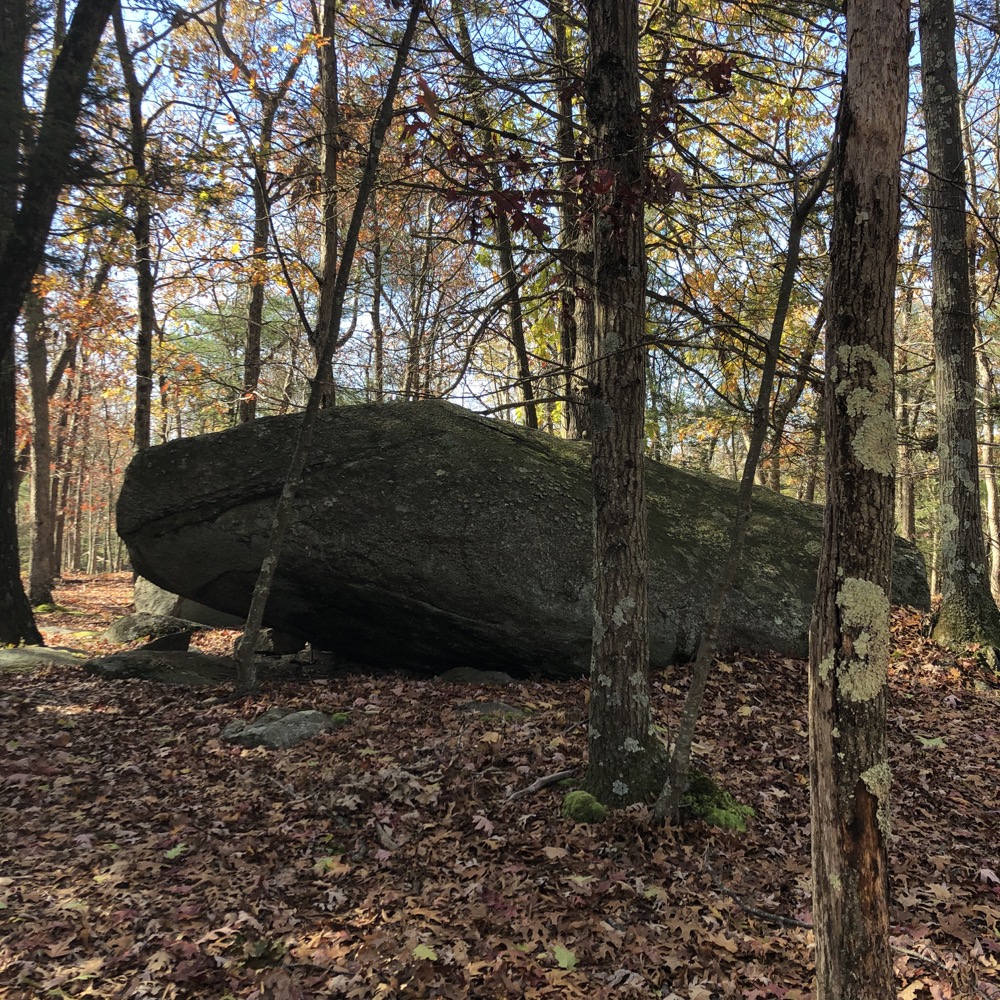 The quarry is pretty stark and just not something you see too much in these parts. I admired it for a bit and then headed east on the yellow/gray trail towards the ol’ Shenipsit. This is a cool trail, as it passes a lot of interesting rock features along the way. And besides, I knew I’d not find myself wandering random trails again as it heads straight towards the well-defined CFPA long-distance trail.

All this traipsing about suburban Hartford, so near very popular hiking areas, and I hadn’t seen a single person all day. Granted, it was a weekday, but there are really pretty woods and easily accessible from all directions. Eh, I’ll take it. I didn’t need any COVID hikers all up in my space. 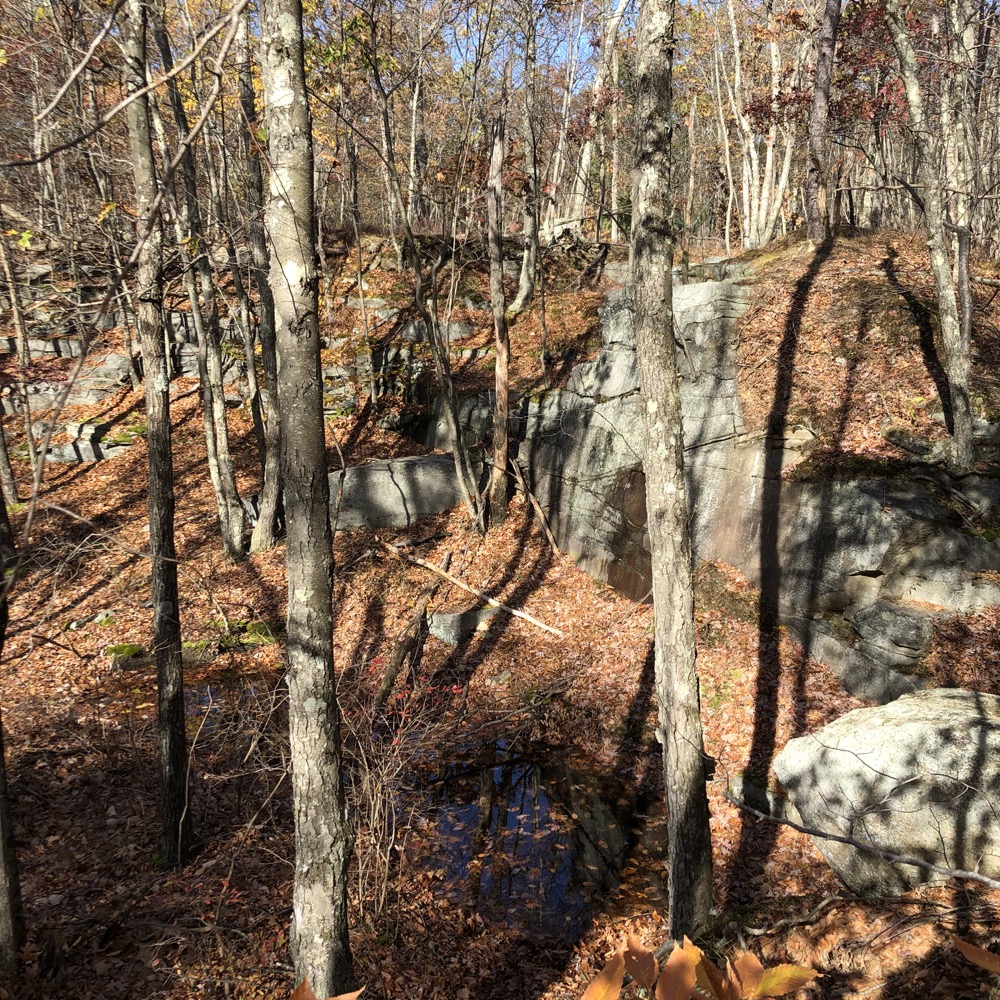 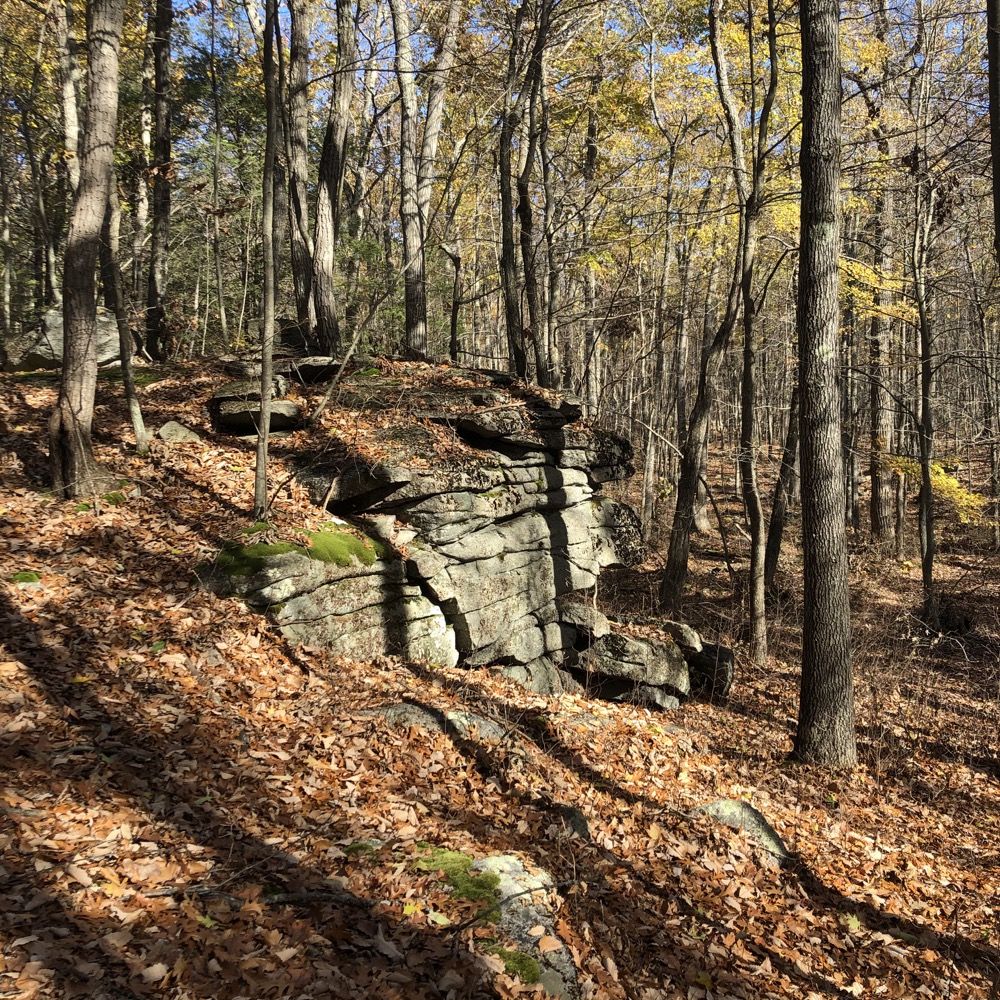 Once I hit the S’nip, I headed south for a bit on the familiar section of blue-blazed trail looking for a red-blazed trail to my right. I was a bit leery I’d miss it, knowing it would be a lightly hiked and possibly barely blazed path. I paid attention to my distance and noticed the trail just where I thought it would be. And I was right, this would be very easy to miss if I wasn’t paying very close attention.

But the red trail is fun! Like the yellow/gray, there are lots of cool rock features and it feels like one of those trails that no one bothers with – yet should. Of course, the blazes disappear here and there and the trail becomes very faint in places, but you’ll be okay. 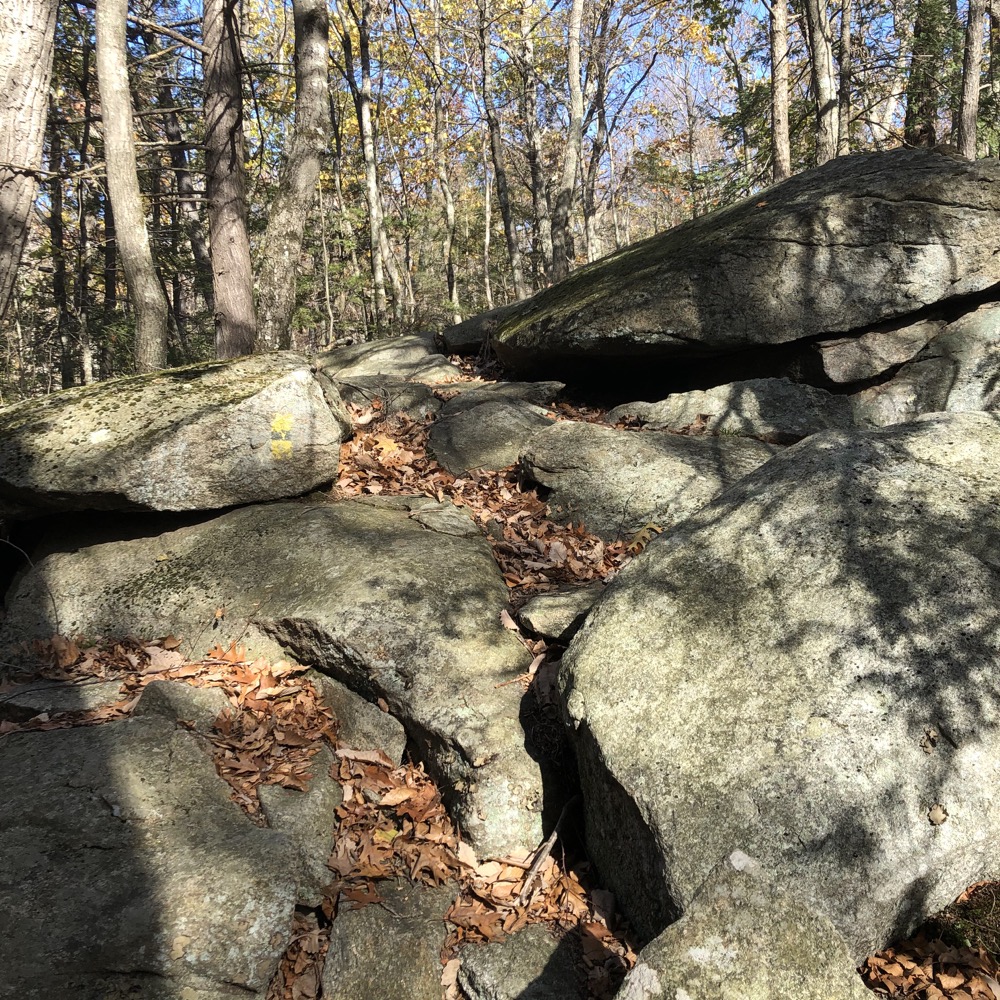 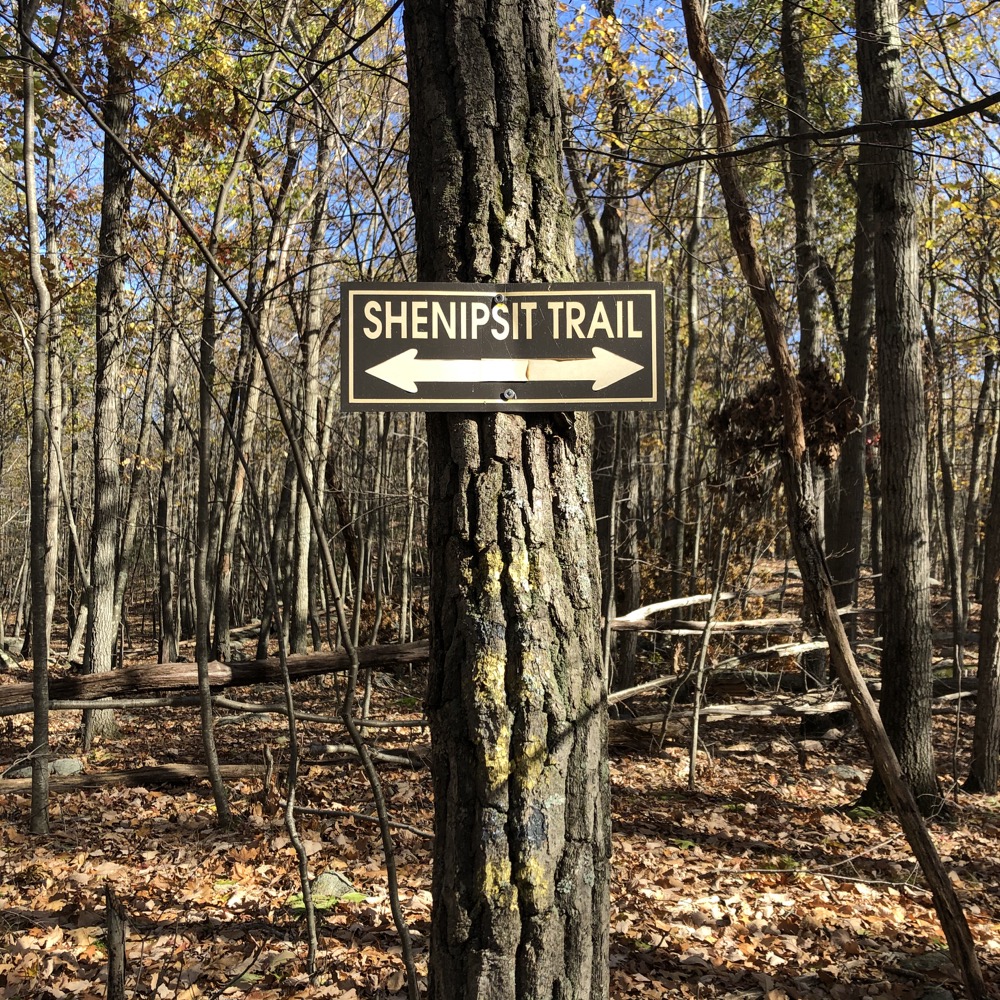 In short order, I rejoined the yellow/gray trail, passed the quarry again, and then headed off down the yellow/black trail which provides a different path to the parking area on Line Street. At this point, I’d crossed over into water company property and noticed all the warning signs. These signs are toothless, but just be aware that the ownership is different south of here.

Trails do head south deeper into Glastonbury through an area called Roaring Brook by Manchester’s Water Authority and Buckingham Reservoir by the town to Glastonbury. From those trails, Blackledge Falls can be accessed and if you head further east across the Shenipsit, the whole of Gay City State Park is available to hike or bike as well. 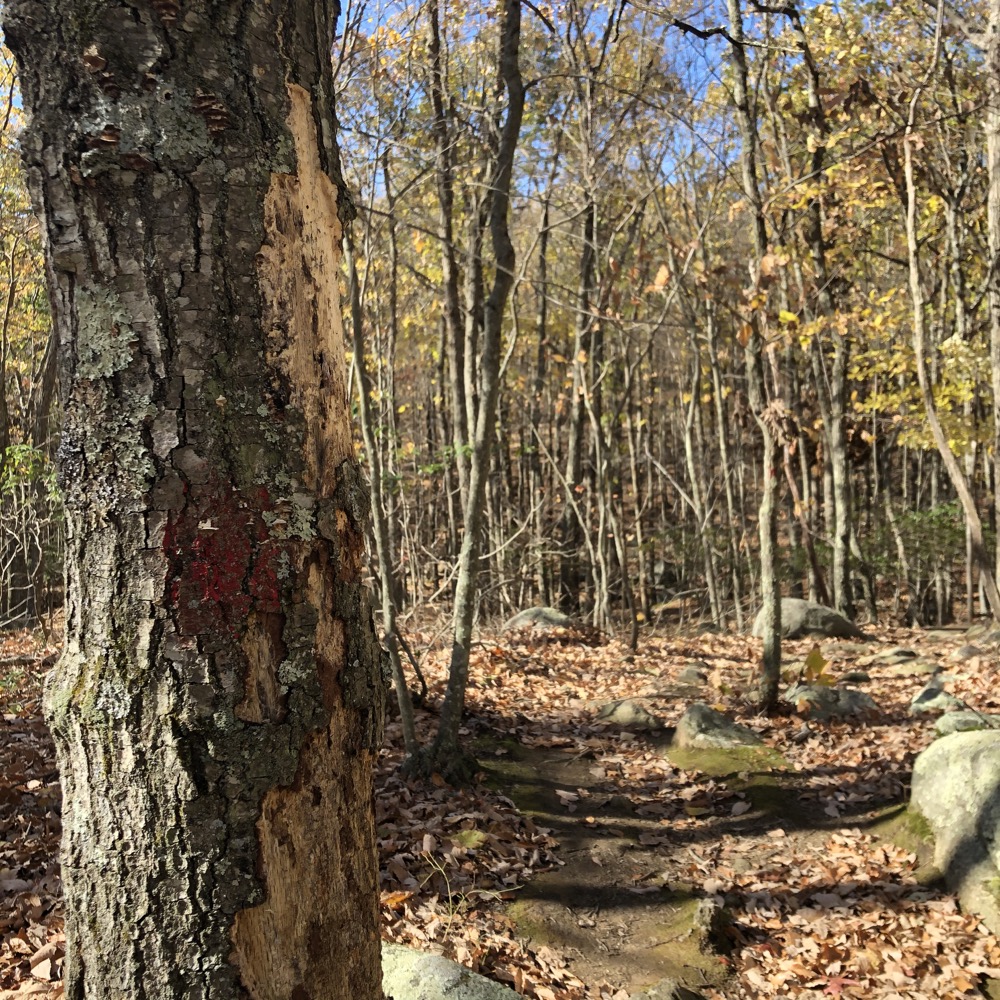 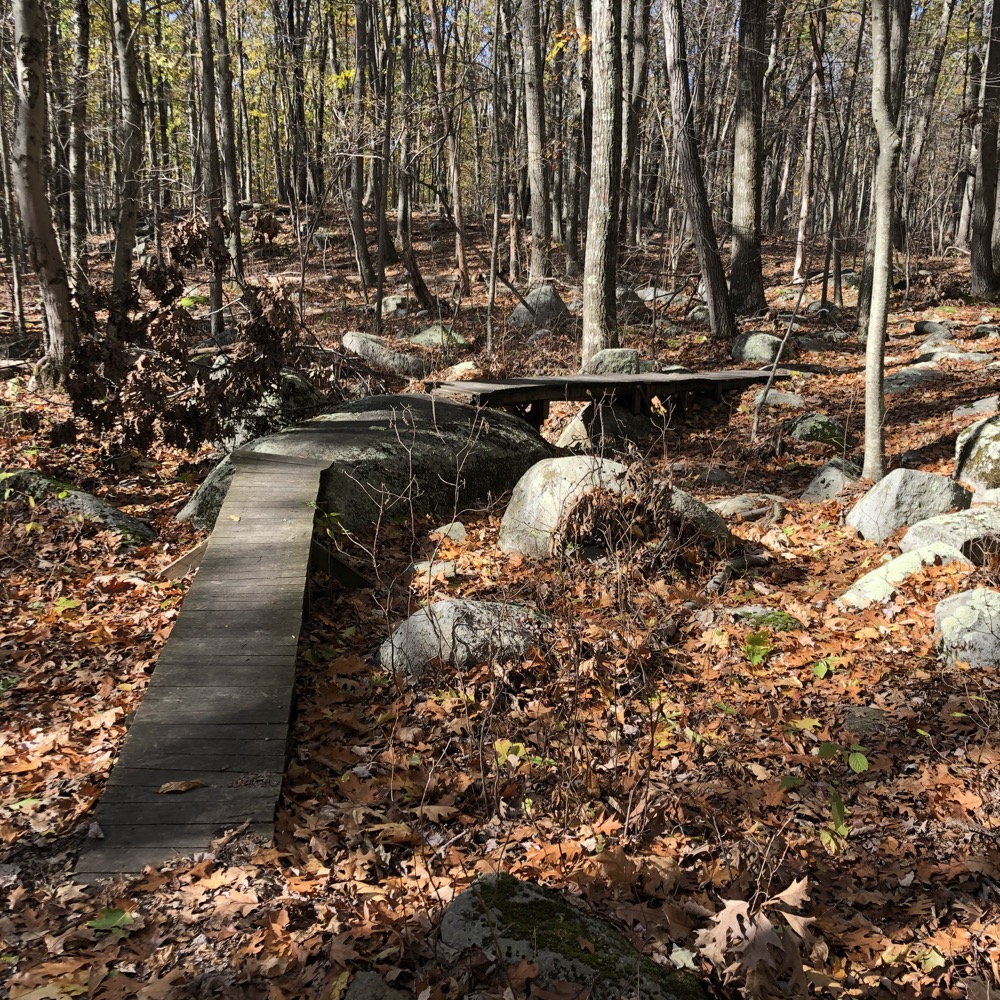 As for me on this day, I simply returned down the hill to my car and headed elsewhere. This is a cool, lightly hiked space in between far more popular hiking areas. It’s a place to get lost figuratively – and literally if you’re not careful. A place to access tons of other places.

A place to become a true head Case. 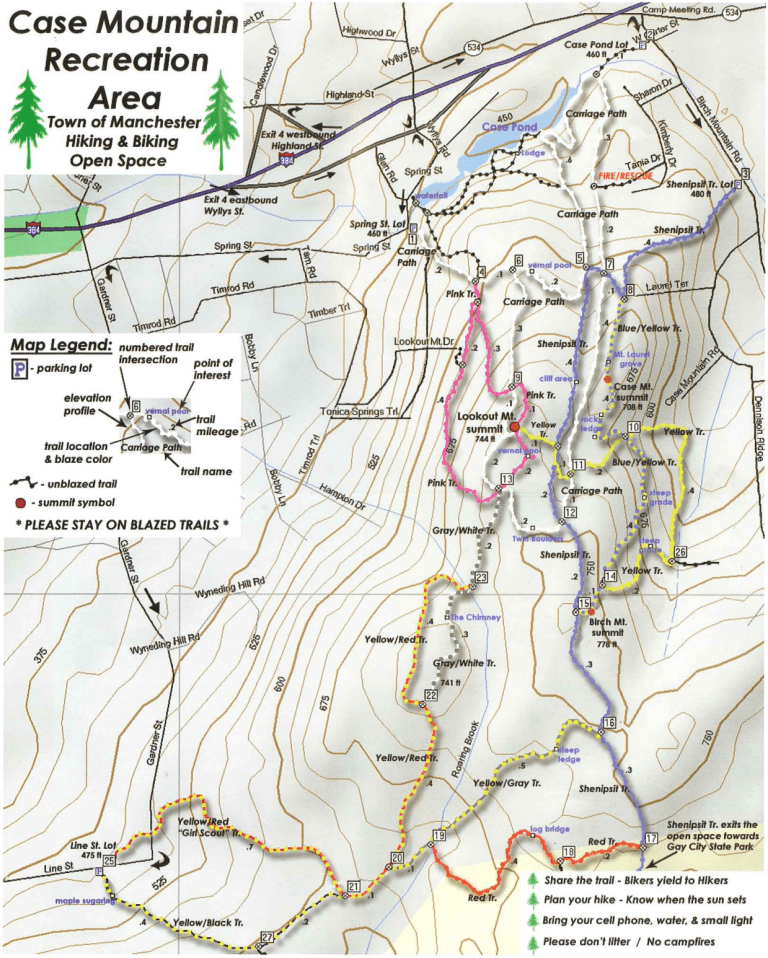